[0001] The invention relates to a process for nitrification of oxidizable nitrogen compounds in waste water, with the aid of a gas containing molecular oxygen and of micro-organisms bound to an inert carrier material in a column.
[0002] A similar process is known from 'Journal of Water Pollution Control Federation', Vol. No. 47, February 1975, p. 291-309. This publication describes a process for the nitrification of waste water in a liquid-filled column. According to this process, waste water into which oxygen has been dissolved in a separate step is supplied to a liquid-filled column in which nitrifying micro-organisms have been bound to a solid inert carrier material.
[0003] This process has the drawback that only waste water streams with a relatively low nitrogen content can be purified. Moreover, the absolute quantity of dissolved organic material must be very low, as an excess of organic material results in partial clogging of the column with micro-organisms decomposing organic materials, so that channelling occurs.
[0004] While the first problem can be met by means of higher liquid loads through recirculation of part of the purified effluent after dissolving oxygen into it, however, as appears from the publication, this cannot readily be done.
[0005] In particular at higher liquid loads, that is to say at higher nitrogen contents of the waste water to be purified, the micro-organisms (activated sludge in general) are washed off from the carrier material, so that an additional column is needed to remove these micro-organisms from the waste water.
[0006] A possible solution to the problem raised by the purification of diluted waste water is the use of a trickle-phase reactor. This however, leads to further problems in that the rate of nitrification and the sludge growths drop to undesirably low levels, and very large equipment is required.
[0007] The purpose of the invention is to provide a process for nitrification of waste water which has no such drawbacks.
[0008] This process is characterized in that a trickle-phase reactor is used as the column, and the gas containing molecular oxygen contains at least 25 w.-% of oxygen, that the off-gas of the column is vented and/or recycled, that during the nitrification 0.5-10 w.-% of C02, with respect to the total quantity of molecular oxygen, is present in the column, that such a quantity of the liquid effluent of the reactor is recycled that the entire column contents are irrigated, and that the gas and the liquid contact each other counter-currently.
[0009] Preferably, the gas containing molecular oxygen contains at least 90 w.-% of molecular oxygen.
[0010] The process according to the invention has the advantage that waste water containing large quantities of nitrogen compounds can be purified without the need for excessively large columns. Furthermore the problem of sludge being washed off from the carrier material does not become significant.
[0011] It is of essential importance that during the nitrification 0.5 to 10 w.-% C02, referred to the total quantity of molecular oxygen, should be present. Preferably, 5-10 w.-% of C02 should be present.
[0012] If C02 is absent, the rate of nitrification is substantially lower than when C02 is present. Moreover, production of nitrifying sludge stagnates if no, or only little, C02 is present during the nitrification, which means that also in a trickle-phase reactor nitrification of waste water containing many impurities will lead to problems.
[0013] As gas containing molecular oxygen, by preference, technical oxygen or mixtures of air and technical oxygen are applied to which also carbon dioxide has been added. Technical oxygen is obtained by cryogenic air separation and it contains approximately 90 vol.-% of oxygen, 50 ppm CO2 and, for the rest, nitrogen and traces of other gases, such as rare gases.
[0014] Two well-known bacterial genera nitrifying autotrophically are Nitrobacter and Nitrosomonas. The type mentioned last oxidizes NH4 to N02 in the following manner:

Nitrobacter oxidizes N02 further to NO3:

These bacteria are autotrophic because they can assimilate cell material from carbon dioxide. The energy required for the assimilation originates from the oxidation of the nitrogen compounds.
[0015] The CO2 addition here has an essentially different function than the addition of, for instance, methanol to a denitrification step, in which methanol functions as oxygen acceptor. Hence, in the denitrification, there is no point in adding C02.
[0016] The extent to which the gas supplied to the column is discharged again and/or recycled depends on a number of factors. In principle, the situation is such that a minor part of the gas mass must invariably be discharged because otherwise a quantity of inert gas will accumulate in the column.
[0017] If this is not done, the effectiveness of the nitrification will decrease. The inert gas originates from the gas supplied, which can in practically no case consist exclusively of 02 and CO2.
[0018] It is possible, however, to limit this discharge of gas to a considerable extent if the gas containing molecular oxygen consists to at least 90 % of molecular oxygen. In that case the gas supply need not be larger than the quantity required for the nitrification.
[0019] However, should the gas containing molecular oxygen contain a considerable (more than 20 %) amount of inert gas, it is to be preferred to discharge a larger quantity of gas from the column than is strictly necessary and to recycle part thereof. This will cause the gas velocity in the column to increase, as a result of which the gas mass in the column becomes mixed in a better way. Moreover, the risk of an inhomogeneous distribution of molecular oxygen in the column is avoided this way. Of course, at lower inert gas contents this risk is present to a much smaller extent.
[0020] By preference, the recirculating waste water is given a pH value higher than 8 before being returned to the column. NaOH can be added very suitably for this purpose.
[0021] The process according to the invention offers the advantage that there is a possibility of smaller gas volumes and, hence, cheaper apparatus. Contrary, for instance, to a column in which outside air is aspirated in the bottom, part to be discharged again at the top, no strong cooling of the contents of the column occurs through water evaporation. In the process according to the invention an equilibrium is formed after some time owing to the gas mass being approximately saturated with water vapour.
[0022] If part of the gas stream is drained and the drain is made up again with fresh gas, a minor amount of water will be evaporated continuously. This quantity is not large, especially not because the drain forms only a very minor part of the total gas stream. The resultant temperature decrease will amount to at most a few tenths of a degree. If a gas saturated with water is used for make-up of the gas stream, there will be no difficulties resulting from a temperature decrease. The result of all this is that, during colder periods, one is not obliged to additionally heat either the waste water of the gas in connection with the risk of freezing or delay in the purification.
[0023] The process according to the invention is carried out in a column suitable for gas/liquid contact which is a trickle-phase reactor and wherein the gas and the waste water are contacted counter-currently. The pressure at which the process is carried out is not critical. Atmospheric pressure is applied to advantage, but also higher or lower pressures are applicable. It is noted that the presence of micro-organisms on an inert carrier material is a well-known fact.
[0024] It is particularly advantageous to carry out the process so that nitrification does not proceed completely to nitrate, but partly only to nitrite. Notably in a subsequent denitrifying step, if any, this yields a saving on the amount of carbon source, like methanol, which is to be added. This effect is achieved by taking care that the formation of nitrate from nitrite is checked, which is possible by either seeing to it that no nitrate-forming organisms are present in the sludge, or that the organisms present are restrained. Also if the + sludge is loaded with waste water containing NH4-N in a high concentration, conversion to, mainly, nitrite is obtained.
[0025] The invention will now be elucidated with the aid of an example which shows that the process described above is applicable for industrial waste water. The example and the tests are not limiting.

[0026] Into the top of a trickle-phase reactor having a volume of 5.0 litres, which contains 4 litres of Berl saddles with sludge applied to them, waste water from a chemical industry is supplied which contains a variable quantity of ammoniacal nitrogen. At the same time 0.026 m of a gas mixture consisting of 5 w.-% of C02, 94.8 w.-% of O2 and 0.2 w.-% of inert gas is led counter-currently with the liquid. The recycle of the liquid effluent over the column amounted to about 3.1 litres/h. The gas was completely recirculated, while the consumed gas was made up. The inert gas dissolved in the liquid phase.
[0027] In the following table the results are given of tests in + which both the flow over the column and the concentration of NH4-N . are varied. 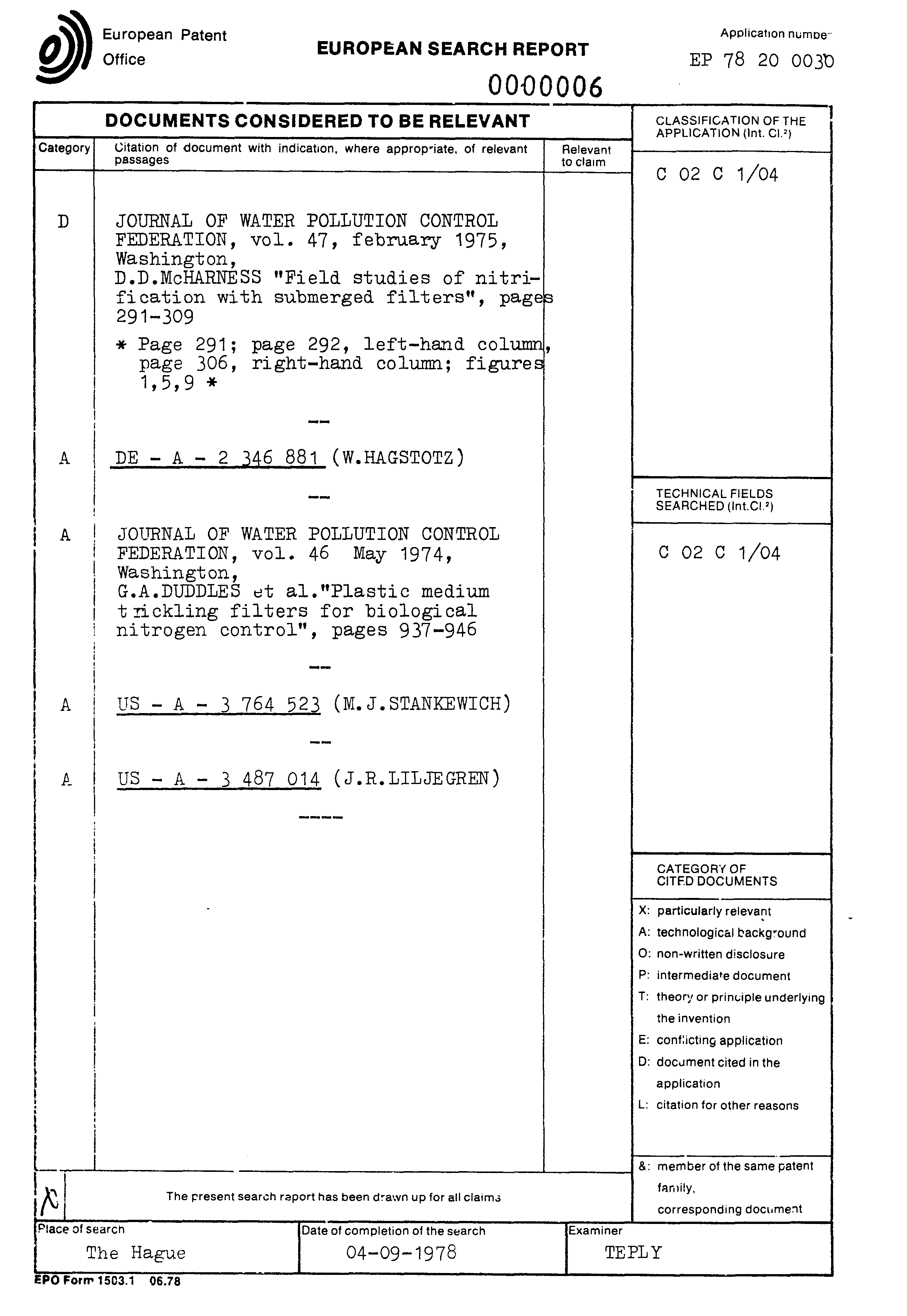