wherein R is a substituted Cl-C4alkyl group.
[0006] The pharmaceutically acceptable acid addition salts of the formula I compounds are also included. In general, the salts are those of the formula I base with a suitable organic or inorganic acid. Preferred inorganic acid salts are the hydrohalides e.g., hydrochlorides, hydro- iodides, hydrobromides; the sulfates, and the phosphates. The hydrohalides, and especially the hydrochlorides, are more preferred.
[0007] The formula I compounds have a chiral center and may occur in optically active forms i.e., as optical isomers. These isomers are designated conventionally by the symbols L and D, + and -, 1 and d, S and R or combinations thereof. Where the compound name or formula has no isomer designation, the name or formula includes the individual isomers, mixtures thereof and racemates.
[0008] The compounds having the S-isomer configuration are, in general, preferred.
[0009] R is a substituted alkyl group exemplified by

[0010] Preferred compounds of formula I are those where R is

[0011] Compounds which are particularly preferred have the formula 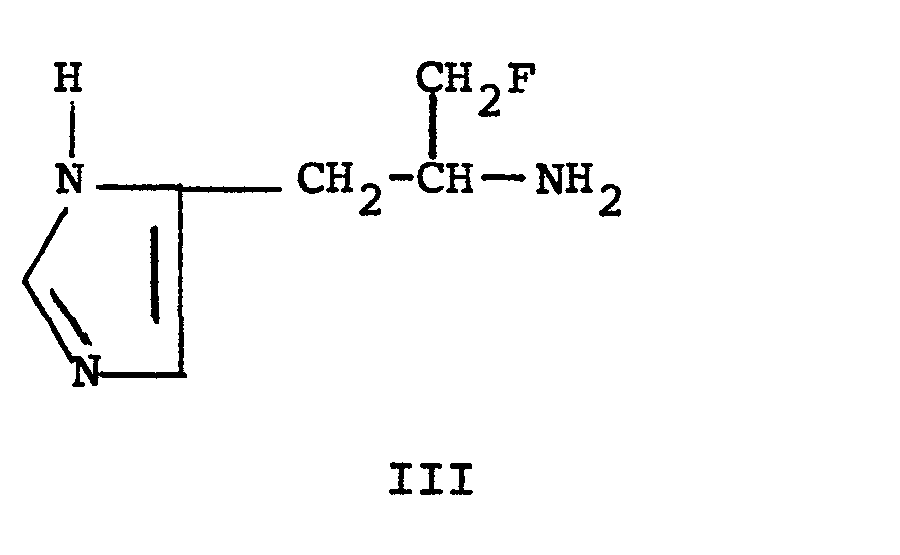 [0013] Another preferred compound has the formula

[0014] Another preferred compound has the formula

[0015] Still another preferred compound has the formula

[0016] The compounds of the present invention have potent decarboxylase inhibiting activity. Decarboxylases are enzymes which act on a-amino acid substrates, effecting decarboxylation to produce the corresponding amine. This action is illustrated by the following equation:

The reaction is generally carried out at temperatures ranging from about -80°C to about 20°C. This general reaction is also referred to as fluorodehydroxylation and is described in the Journal of Organic Chemistry 40, 3809-10 (1975).
[0025] Another useful method for preparation of a-fluoromethyl amines involves photofluorination, e.g.:

where R1 is C2-C6 alkanoyl are prepared by acylating the corresponding compound where Rl is hydrogen, in an acid medium to prevent acylation of the amino group. In general, conventional acylating agents and conditions are employed.
[0029] The following examples illustrate preparation of representative compounds of the present invention. All temperatures are in °C. Melting points are determined in open capillary and are uncorrected.

[0030] Four and 55/100 g of sodium borohydride is suspended by stirring (magnetic stirring bar) with 250 ml of tetrahydrofuran (THF). TO the stirred suspension there is added 6.7 g of CaCl2 (powder), the mixture stirred for 30 minutes at room temperature, then refluxed under stirring for 90 minutes. To the Ca(BH4)2 solution thus obtained, a solution of 10.2 g of methyl ester of D-DOPA (DOPA = 3,4-dihydroxy-phenylalanine) in 55 ml of THF is admixed. After 15 minutes at room temperature, the suspension is refluxed with continued stirring for 5-1/2 hours. (Note: The whole operation described above was conducted under a protective blanket of dry N2 gas.) The solvent is evaporated in vacuo and methanol (300 ml) is added with caution. After the gas evolution ceases, the solvent is removed by distillation in vacuo, fresh methanol is added again, then HC1 gas is passed in until saturation. Solvent is removed again by evaporation in vacuo and the whole CH3OH/HCl treatment is repeated. (These treatments split the borate complex formed in the reduction as well as removing the methyl borate). The residue is dissolved in H20, 109 ml of 0.55M aq. H2S04 is added and the mixture aged at 5°C overnight. The CaS04 is added and the mixture aged at 5°C overnight. The CaSO4·2H2O is then removed by filtration, washed with water (10 ml) and isopropanol (2 x 30 ml). The combined filtrates were evaporated in vacuo to dryness, the solid residue is stirred with isopropanol (100 ml) for 1/2 h., filtered, cake washed with isopropanol (2 x 30 ml), the combined filtrates evaporated to dryness in vacuo. This crude product is further purified by elution chromatography (cation-exchange resin column made of 0.95 1 AG50-X-8 resin, 200/400 mesh, H+ form). Effluent is monitored by LKB UVICORD II UV monitor. Elution is as follows:

[0031] The product is located by the UV absorption monitor, which is connected with a chart recorder. The UV absorbing peak is released by the last solvent listed. The appropriate fractions are combined and evaporated to dryness in vacuo, to deliver the hydrochloride of R-a-hydroxymethyl-dopamine. For final purification this is recrystallized from isopropanol, to give crystalline product, m.p. 159-160°C. [a]D: 19.5 + 0.5° (c, 1 in 1M aq. HC1).

[0032] One g of the product obtained under a) is charged into a KEL-F® reactor. HF gas is passed in while the reactor is immersed in a dry-ice- acetone bath, until a solution with 30 ml volume forms. The cooling bath is removed and the solvent evaporated by passing through a stream of N2 gas. The residue thus obtained represents the HF salt of R-a-hydroxymethyl-dopamine. This is redissolved by condensing into the reactor HF again by cooling it in a dry-ice-acetone bath and passing in HF gas until a solution with volume 50 ml forms. SF4 gas (1.5 ml, measured as liquid at -78°C) is passed in then under continuous cooling and stirring and the solution left standing overnight, while the reactor is being kept in the cooling bath, but without replenishing dry ice. The solvent is removed the next morning by passing through a stream of N2 and the residue is redissolved in 2.5M aq. HC1 (25 ml), evaporated to dryness and the residue purified by elution chromatography on a column made of cation-exchange resin (190 ml of Dowex 50 AG50-X-8, 200/400 mesh). Elution with water, followed by 0.5M aq. HC1 with 5% methanol (2 1), followed by 0.6M aq. HC1 with 10% methanol (4 1). UV absorption of the effluent is followed by LKB UVICORD II recording UV monitor. The effluent fractions containing UV absorbing material are evaporated to dryness in vacuo to deliver R-α-fluoromethyl-dopamine.HCl. 0.6 g of this crude product is dissolved in isopropanol (4 ml), treated with DARCO G-60, then 26 ml of ethyl acetate is added. The crystalline product is refluxed once more in a similar manner, to give 0.545 g of pure HC1 salt , m.p. 152-3°C [α]D: 18.4 + 0.5 (C, 1 in 1M aq. HCl).

[0034] One g of D-histidinol is placed into a KEL-F reactor; the reactor is immersed into a dry-ice-acetone cooling bath and HF gas is passed in until a volume of 40 ml collects. SF4 gas is passed in (2.0 ml, measured as liquid, at -78°C) and the mixture kept at -78°C for 5 hours. The cooling bath is removed and the solvent evaporated by passing N2 gas through it. The residue is dissolved in cc. aq. HC1 (15 ml), the solution is evaporated to dryness in vacuo to yield substantially pure R-a-fluoromethyl-histamine hydrochloride-hydrofluoride salt. For transformation into the dihydrochloride salt, this product is dissolved in water and charged onto a cation-exchange resin column Dowex 50-X-8 (ml resin, H+ form). The column is washed first with H20 until the effluent becomes neutral, then the product is eluted with 4M aq. HC1 (275 ml). This effluent is evaporated to dryness to deliver substantially pure R-a-fluoromethyl-histamine dihydrochloride. This is recrystallized by dissolving it in 40 ml of boiling ethanol 2BA, concentrating this solution by evaporation in vacuo to 15 ml volume and cooled (ice-bath) for 2 hours. The crystals formed are collected by filtration and dried in vacuo to give R-a-fluoromethyl-histamine dihydrochloride, m.p. 181-2°.

[0035] S-a-Fluoromethyl histamine·HCl is prepared from L-histidinol via the method described in Example 3 for R-α-fluoromethyl-histamine·2HCl, m.p. = 182-83°C.
[0036] The free amines are obtained from the hydrochloride salts by conventional neutralization.

[0037] S(L)-Tryptophanol (0.7 g, 3.7 mmoles) was placed in a Kel-F reactor, cooled in a dry ice-acetone bath (-78°C) and approximately 20 ml of anhydrous HF was condensed with stirring at -78°C. Sulfur tetrafluoride (approx. 1.5 ml, 26 mmoles) was added with stirring at -78°C over a 15-minute period. The reaction mixture was stirred for 30 minutes at -78°C and then the HF was blown off with a fast stream of N2 over a 2.5-hr. period at -78°C. The dark residue was dissolved in 25 ml 3N HC1 and evaporated to dryness at 25°C, in vacuo. The residue was dissolved in 10 ml H20, basified with 2.5N NaOH, and the separated amine was extracted with 2 X 50 ml ether. The combined ether extracts were dried over MgS04 and evaporated to dryness in vacuo at room temperature. The crude product (4 spots, by TLC on silica gel plates developed with ethyl acetate-methanol-water 85:10:5) was chromatographed on silica gel H (E. Merck, 120 g.) using ethyl acetate-methanol-water 88:10:2 as the elution solvent. The desired product, (S)-a-fluoromethyl-tryptamine, was contained in fractions No. 31-60 (12 ml each). They were combined and evaporated to dryness to yield S-a-fluoromethyl-tryptamine characterized as the tartarate salt, by 300 MHz H NMR, mass spectroscopy and microanalysis.

[0038] Employing the procedure described in Example 5, but using R(D)-tryptophanol as starting material, R-a-fluoromethyl-tryptamine is obtained.

[0039] Eleven and 7/10 g of 4-methyl-4-aminobutyric acid is placed in a KEL-F reactor and dissolved in 200 ml of liquid HF; then CF30F gas is passed in while the reactor is immersed in a dry-ice/acetone cooling bath. The solution is irradiated (through a window on the top) by a 2500 W ultraviolet light source. (See J. of Am. Chem. Soc. 98, 5591-93 (1976) and ibid 92, 7494 (1970) for a general description of photofluorination).
[0040] First, 3 ml liquid C3OF is allowed to evaporate and passed into the solution during a 70 minute period, followed by another 40 min. period with irradiation. Two additional 2 ml (liq.) increments of CF3OF are passed into the reaction mixture with continuing irradiation, each in a time period of about 2 hours. The liquid HF is then removed by a stream of nitrogen gas. The residue is dissolved in 50 ml of 2.5 N aq. HCl and evaporated to dryness in vacuo. This treatment is repeated. The residue thus obtained is dissolved in 270 ml of water; 270 ml of conc. aq. HC1 is added and the solution refluxed for 16 hours, then evaporated to dryness in vacuo, redissolved in 100 ml of water and chromotographed on a column of cation-exchange resin. 3 1 of AG-50-X-8 (200-400 mesh) resin is employed in the H+ form. Elution: 18 liters of water, followed by 0.4.N aq. HC1. The effluent is monitored by UVICORD Model III ultraviolet absorption monitor, filter 206 nm. 22 ml fractions are collected. Fractions 410-610 are combined and evaporated to dryness in vacuo to deliver 4-fluoromethyl-4-amino-butyric acid hydrochloride. For liberation of the acid, the 4-FM-GABA·HCl is dissolved in water and passed through an AG-50-X-8 ion-exchange resin column (100 ml of resin). The column is first washed with water, then eluted with 2 N aq. NH40H. Evaporation of the NH4OH solution in vacuo gives R,S-4-fluoromethyl-4-amino butyric acid. It is recrystallized from H20/ isopropanol and charac- terized by C-H-N-F analysis and 1H and 19F NMR spectroscopy.

1. A compound of the formula

5. A compound of Claim 4 wherein said substituted alkyl group is

6. A compound of Claim 1 of the formula

18. A compound of Claim 17 having the S-isomer configuration.
19. A process for preparing compounds of Claim 1 which comprises fluorodehydroxylation of a compound having the formula

20. The process of Claim 19 wherein said formula VII compound is 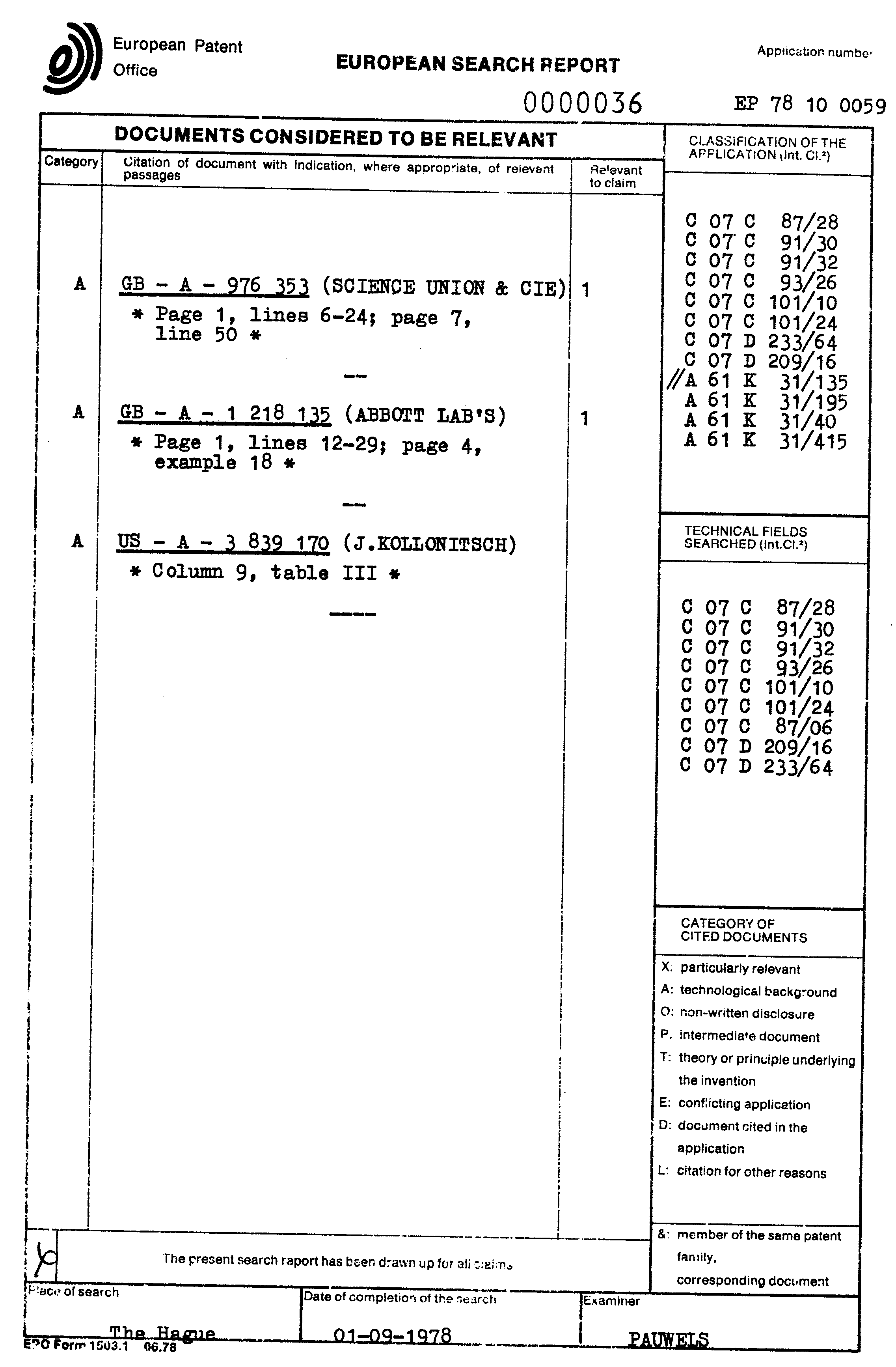