[0004] The present invention is directed to an improvement in a continuous process for chlorinating or chlorosulfonating polyethylene by dissolving polyethylene in a solvent and reacting the resultant solution with sulfuryl chloride at a temperature and under sufficient pressure to maintain reactants, the resulting chlorinated or chlorosulfonated polyethylene and product gases in a single liquid phase, the improvement comprising using as the solvent a mixture of methylene chloride and trichlorofluoromethane in a weight ratio of 0.3-1.6, and reducing the pressure or increasing the temperature of the single liquid phase to form two liquid phases, one a polymer-rich phase and the other a solvent-rich phase, and separating the phases.

[0019] A solution of polyethylene in a mixed solvent is prepared by continuously mixing 30 g/min. molten polyethylene at a temperature of 160°C with a mixture of 200 g/min. of trichlorofluoromethane solvent and 105 g/min. of methylene chloride solvent. To this solution is added 66 g/min. of a solution of 0.5 g azobisisobutyronitrile and 1 cm3 of pyridine per liter of methylene chloride and subsequently 64 g/min. of sulfuryl chloride. The resulting solution, containing 0.85 g of methylene chloride per gram of trichlorofluoromethane at a temperature of about 105°C, is fed to the bottom of a 5 cm diameter x 120 cm long cylindrical reactor (vol. = 2400 cm3) where during the average residence time of 6 min. the chlorosulfonation reaction takes place and the heat of reaction raises the temperature of the solution to about 150°C. Pressure in the reactor is maintained at 7.5 MPa by a control valve at the exit; thus the reactants, chlorinated polyethylene and product gases are a single liquid phase. The solution coming from the reactor is conducted to a decanter which is a pressure vessel maintained at a pressure of about 2.8 MPa and a temperature of 148°C where it separates into a solvent-rich phase containing less than 2 wt. % polymer and polymer-rich phase containing about 35 wt. % polymer. The polymer-rich phase is separated by gravity flow and is passed into a devolatilizing extruder where the remaining product gases are removed. Chlorosulfonated polyethylene containing 34 wt. % Cl and 1 wt. % sulfur is recovered at a rate of 46 g/min.

[0021] The procedure described in Example I is repeated except that the temperature of the material entering the chlorosulfonation reactor is adjusted to 120°C; the heat of reaction increases the temperature of the solution to about 163°C. 15 MPa pressure in the reactor is required to maintain a single liquid phase in the reactor. Phase separation is achieved by reducing the pressure to 3 MPa in the decanter. The temperature remains at about 160°C and a solvent-rich phase is removed overhead. The heavier polymer-rich phase is drawn off the bottom of the separator. 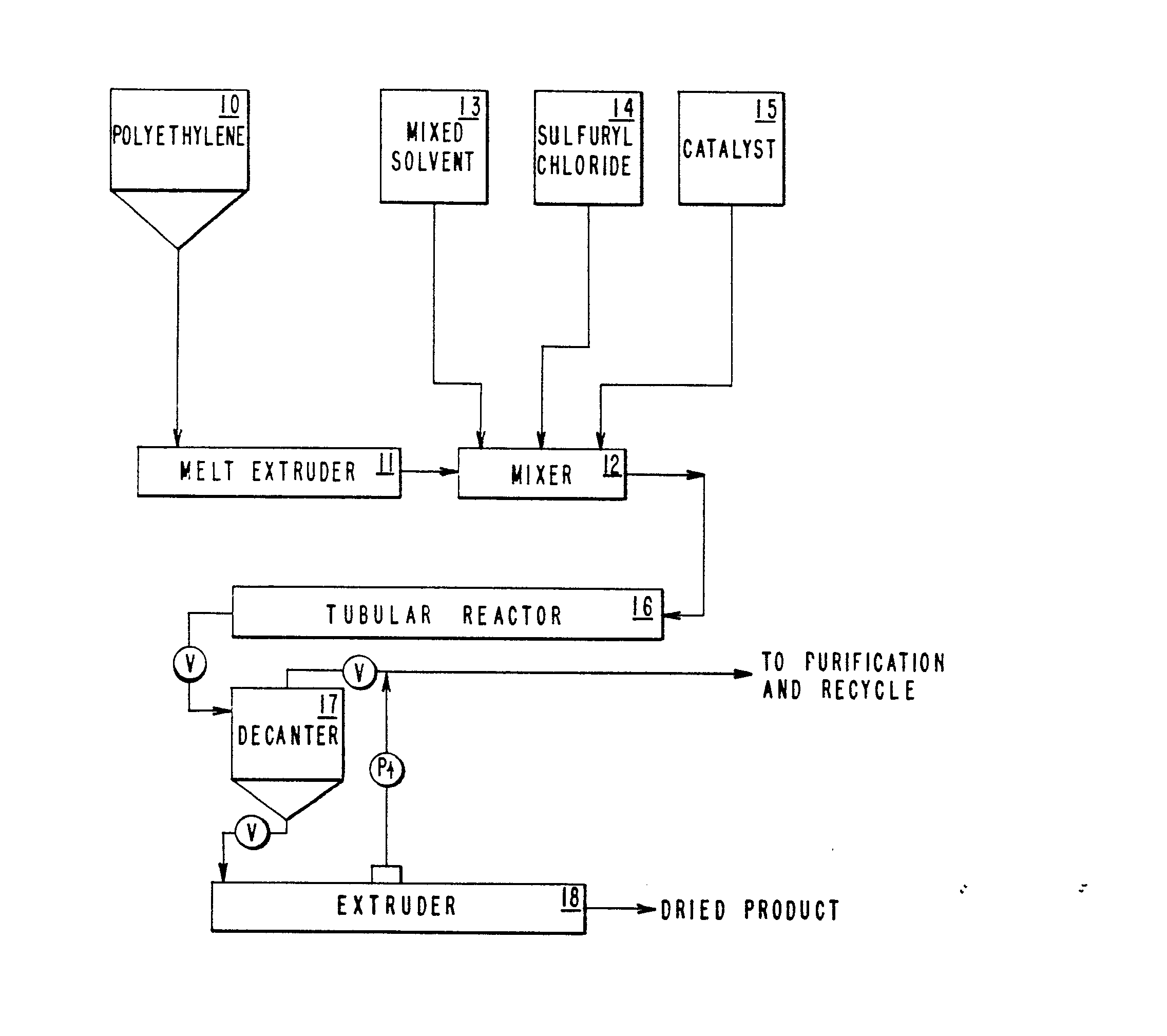 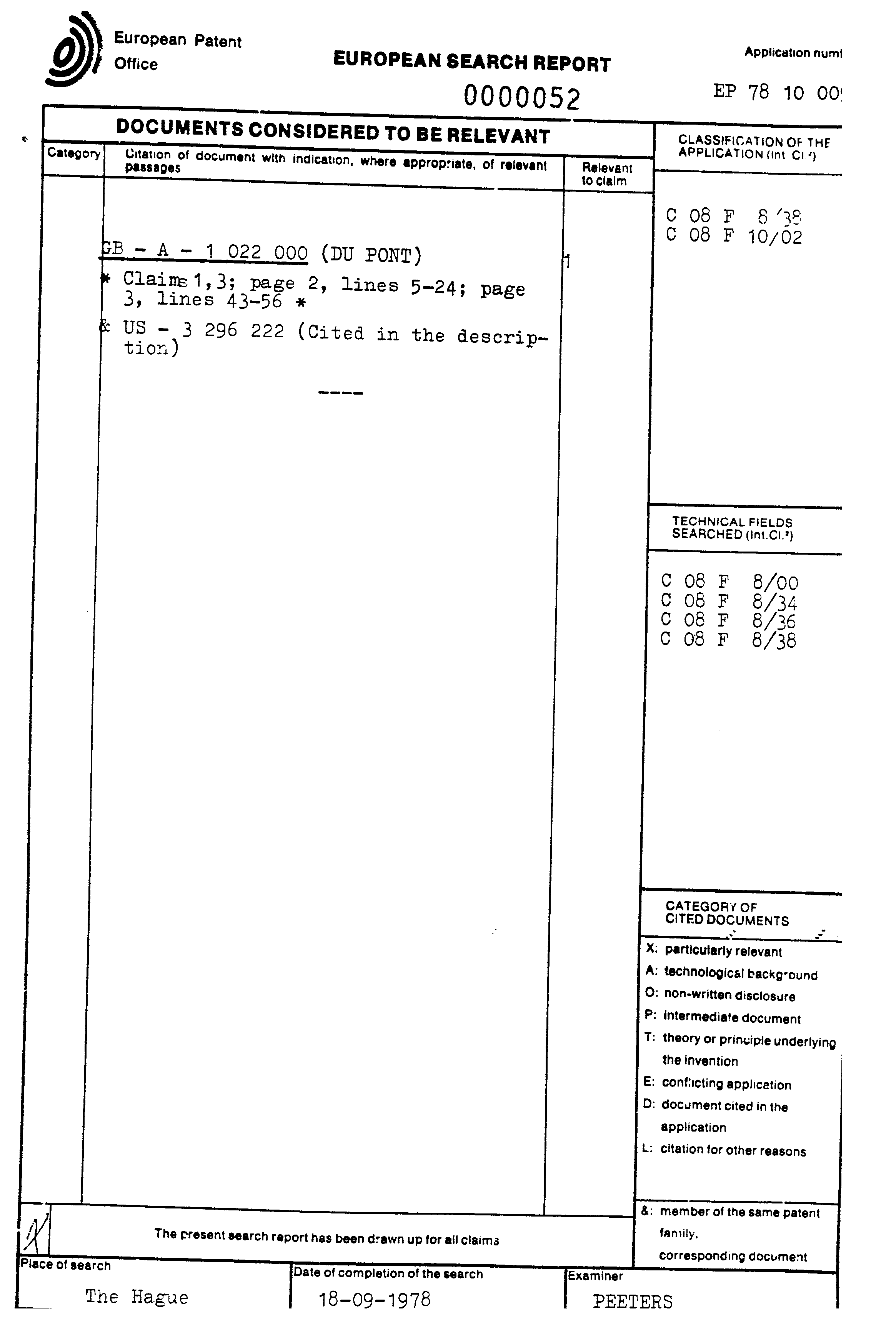