(57) The concentration of aromatic aminocarboxylic acids and their conjugates in body fluids is determined by treating the body fluid with a hydrolyzing agent, extracting said acid with an ion exchange resin, washing residual body fluids from the resin, eluting said acid from the resin with an acid solution of a complexing agent and determining the concentration of said acid by comparing the color of the extract with the color of solutions having known concentrations of said acid wherein the improvement comprises employing a non- acid hydrolyzing agent, for example, a base or an enzyme.

[0015] The following illustrates the procedure using urine as the body fluid in the determination of PABA:

3. Immediately insulate the vial by inserting into a Styrofoam manifold and wrapping the entire system with a sheet of glass wool. Allow to stand undisturbed for at least one hour.

5. Fill the remainder of the second vial with water to bring to about 20 ml. Cap and mix the vial.

6. Snap off the top and bottom tabs of a disposable ion-exchange column containing the resin and support the column by a plastic holder.

7. Carefully pour the solution of the second vial into the column reservoir and allow the liquid to slowly percolate through the resin. This liquid is discarded.

8. Rinse the resin by filling the column reservoir twice with.water. Allow each volume to drain completely.

. 9. Remove the column from the holder and shake off any excess water.

10. Pour an acidified solution of 0.025% p-dimethylaminocinnamaldehyde into the column reservoir and collect in a third vial.

11. Cap and shake the third vial. :The resulting solution will be colored a shade of orange or rose-red.

12. Compare the series of colored standard solutions or a chart depicting same with the unknown sample. View all samples from directly above the opening, looking toward the bottom of each vial. (It is important that. this is done under good lighting.)

13. Match the unknown with the standard that most closely approximates its color. If the unknown is greater than the 50% standard (more red), it is normal. Values equal to, or less than, 50% should be confirmed by a second, outside test.

[0020] The method for determining aromatic aminocarboxylic acids described above is fast, accurate and reproducible. The method simplifies the presently employed Bratton-Marshall procedure and can be carried out employing low cost, disposable equipment.

b. a vial containing a known quantity of alkali metal base;

c. optionally, a vial for dilution;

f. a vial containing an acidic solution of a color complexing agent and

g. a means for determining the concentration of an aromatic aminocarboxylic acid.

8. The kit of claim 7 which comprises:

a. a disposable syringe of 1-3 ml. capacity;

b. a disposable vial containing 1.5 ml. of 50% aqueous sodium hydroxide;

e. a disposable vial containing an acidic solution of 0.025% of p-dimethylaminocinnamaldehyde and 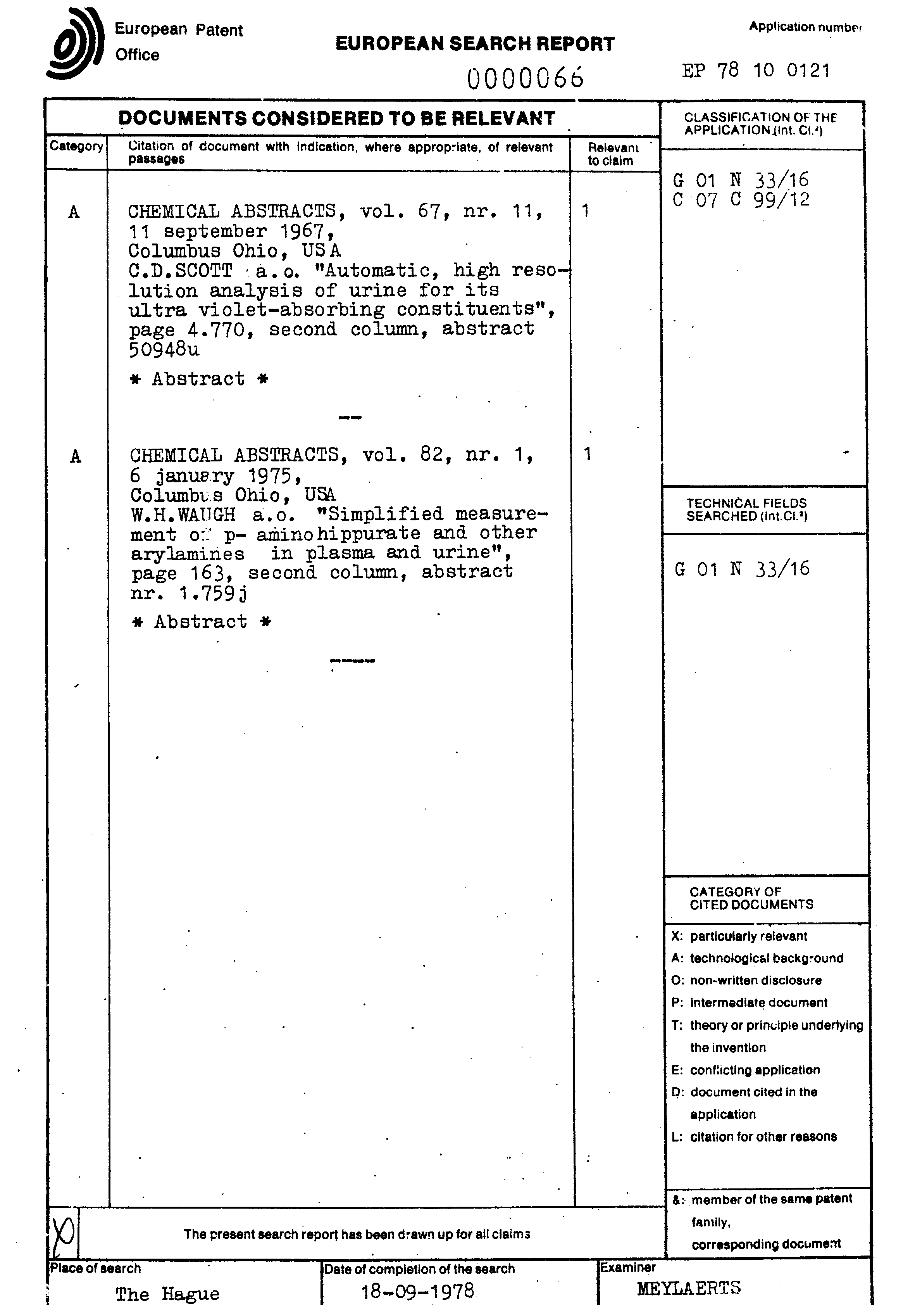