[0001] This invention relates to alkyds, more in particular to water-dispersible, air-drying alkyd resins suitable for the preparation of'aqueous alkyd dispersions including water-based paints with a gloss finish.
[0002] Water-based paints having a gloss finish have been known for some time. Water-dispersibility of the alkyds which constitute the resin of these paints has been conferred generally by including in the alkyd alkylene oxide groups from e.g. polyethylene glycol in an amount of at least 9% by weight of the alkyd resin. This amount of alkylene oxide addition product, whilst considered necessary to obtain water-dispersibility and a gloss finish, also caused the paint films obtained therefrom to be soft and to have a poor water-resistance. Attempts have been made to improve the quality of the coating e.g. by the incorporation of a vinylic monomer such as styrene, but the results have not been entirely satisfactory, especially not. as regards water-resistance, gloss and hardness of the coatings obtained.
[0003] It has now been found that novel water-dispersible air-drying alkyds can be obtained by building into an alkyd 1.25-3.75% by_weight of polyalkylene oxide radicals. These novel alkyds can be dispersed in water so as to form stable dispersions useful in the preparation of water-based paints.
[0004] By the term alkyd resin is to be understood a polyester product composed by polyhydric alcohols, polybasic acids and monobasic fatty acid (of. Encyclopedia of Polymer Science and Technology, Vol. 1, page 663, Interscience New York). In the case of air-drying alkyd a substantial amount of the fatty acids are polyunsaturated.
[0005] Particularly suitable alkyds are based on a drying oil or suitable unsaturated fatty acids, a polyol, an aromatic and/or aliphatic polycarboxylic acid and an alkylene oxide addition product in which

- the polyol component constitutes 10-30, preferably 12-25 weight percent of the mixture,

and the relative amounts of polyol, drying or semi-drying oil and carboxylic acid are chosen in such a way as is usual in the manufacture of (semi) air-drying alkyd resins to be used in solvent-based paints. Especially alkyds having an acid value of 5-20 mg KOH/g and a hydroxyl value of 5-125 mg KOH/g can be used successfully and alkyds having an acid value of 7-14 and hydroxyl value of 10-75 are preferred. It is surprising that with these low amounts of alkylene oxide addition products water-dispersible alkyds suitable for obtaining glossy paints could be obtained.

A. Preparation of the modified air-drying alkyds

[0024] A 3-litre, 4 necked reaction vessel equipped with a stirrer, a gas inlet tube, a thermometer and a Dean and Stark apparatus connected to a condensor was charged with drying oil and/or fatty acid, polyol and calcium hydroxide as indicated in Table I and subsequently heated to 250°C under a nitrogen blanket, until alcoholysis was complete (checked by complete solubility of a sample in ethanol). The mixture was then cooled to about 200°C and the acid/anhydride, polyalkylene oxide addition compound (Carbowax 1540) and optionally a polyol and xylene were added.
[0025] The contents of the flask were heated to 240-245°C while distilling off the reaction water azeotropically and maintained at this temperature until a sample of the resin had the indicated acid value and viscosity. See Table I.

B. Preparation of the emulsions

[0026] The resin obtained as described under A was cooled to 140°C and added over a period of 1.5 h. to an aqueous phase having a temperature in the range from 20°-100°C, which contained the emulsifiers and base as indicated in Table II. Stirring was effected by means of a Cowless-type disperser.
[0027] The dispersions thus obtained showed after 24 hours the characteristics as tabulated in Table II.

[0028] In a llitre tin the pigment was dispersed in water together with dispersants and a protective colloid.
[0029] Subsequently, the alkyd emulsion and the driers were added..If necessary an antifoam agent and/or a thickening agent may be added. The paint composition and the paint properties are listed in Table III. 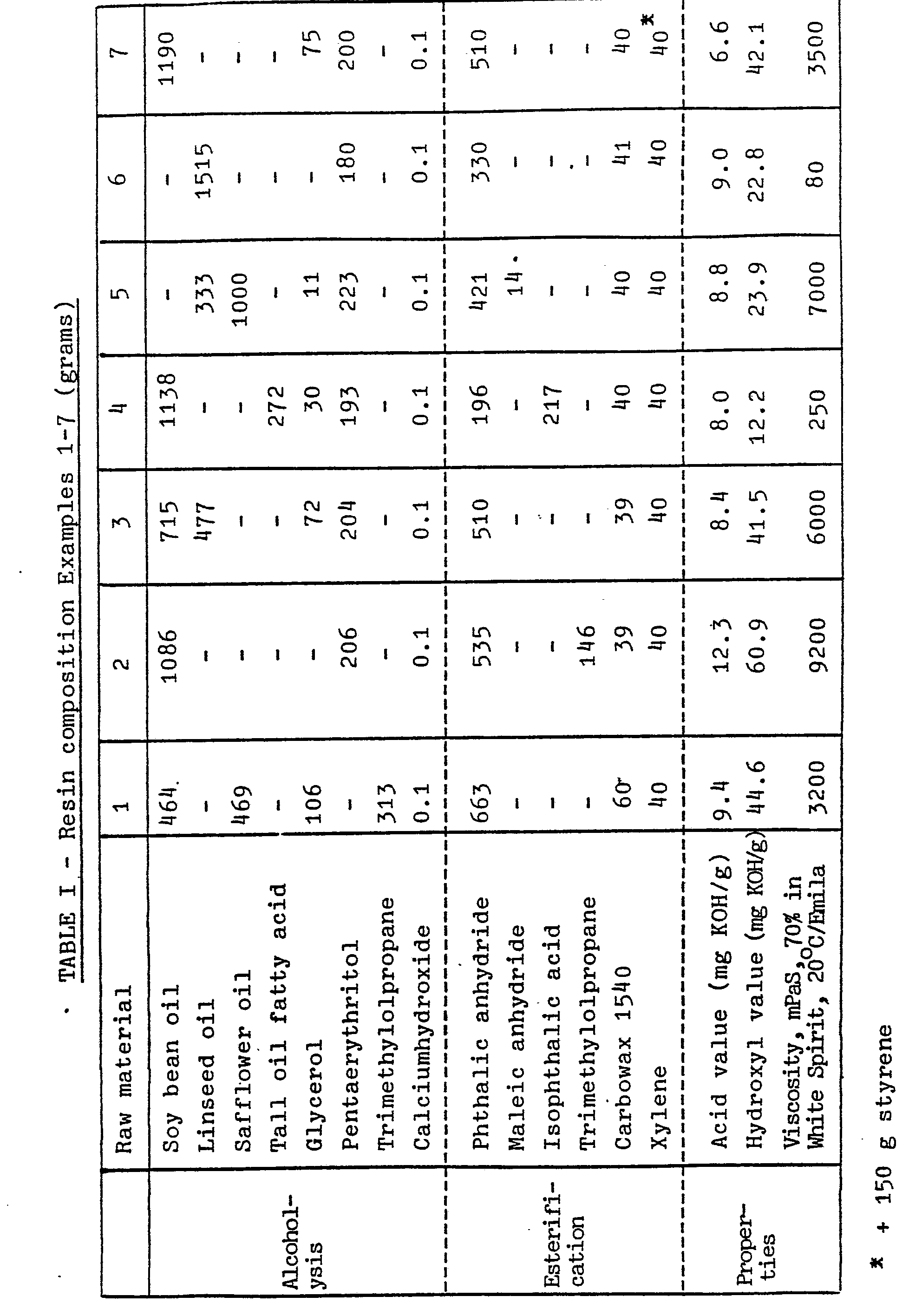 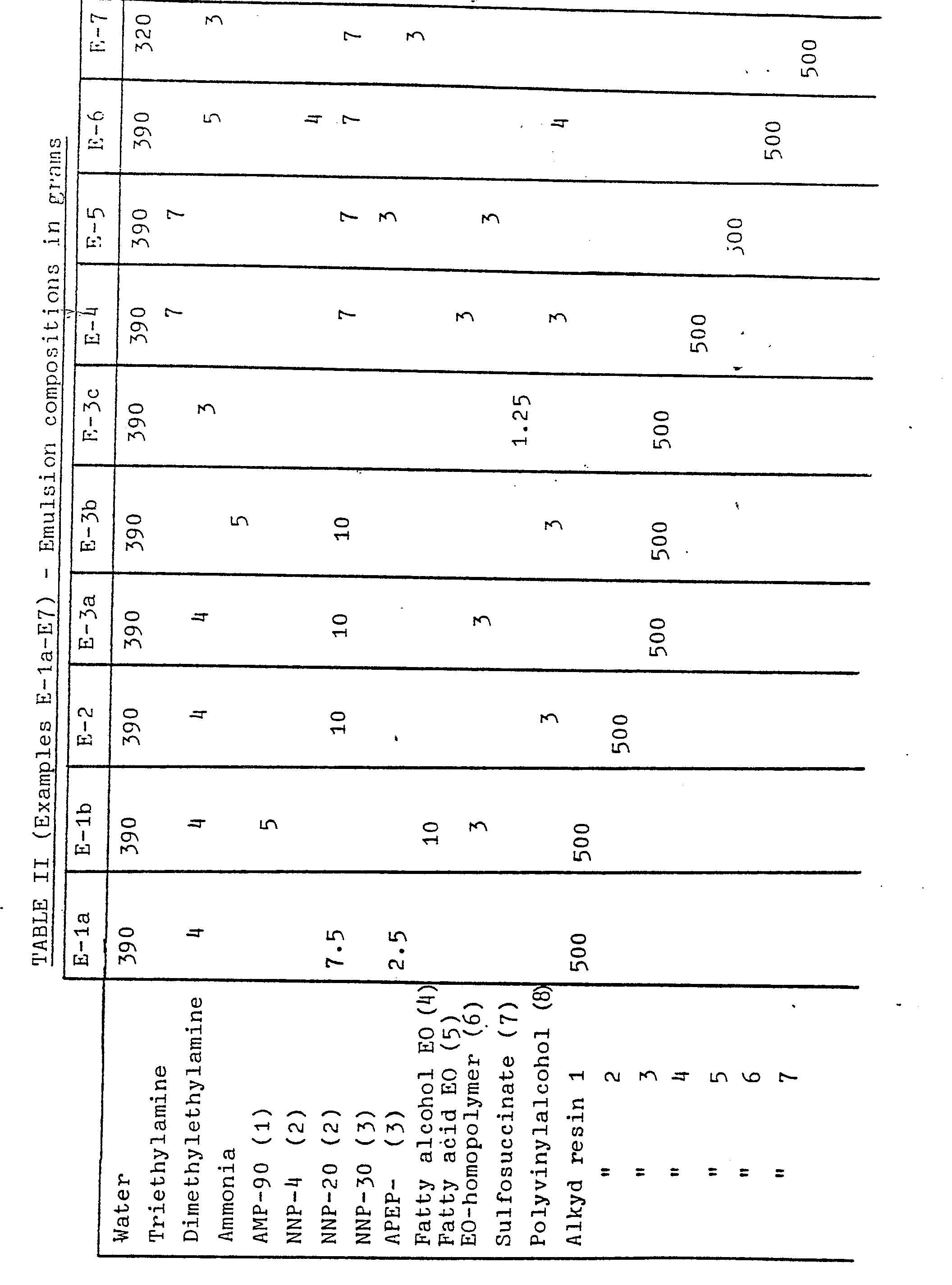 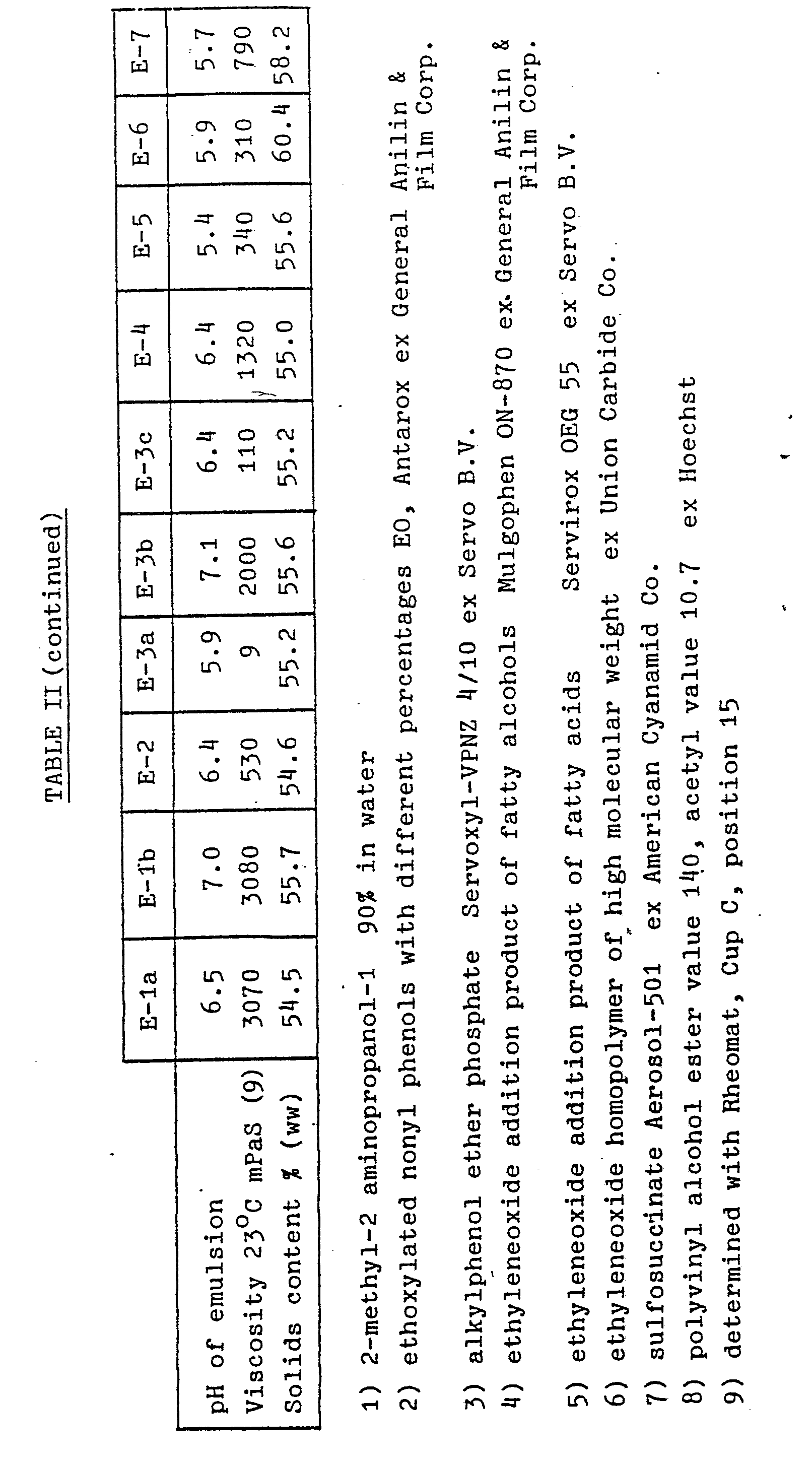 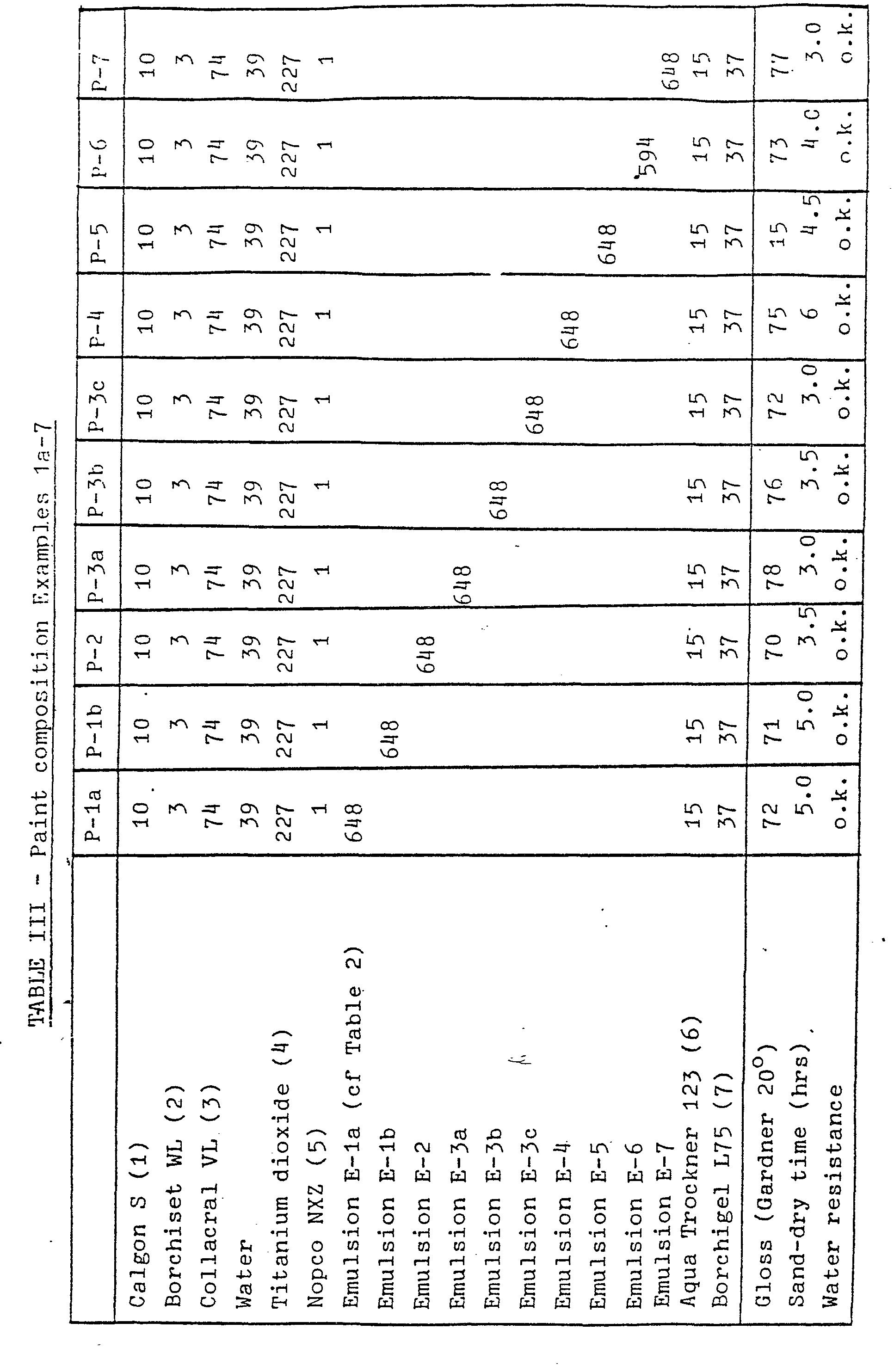 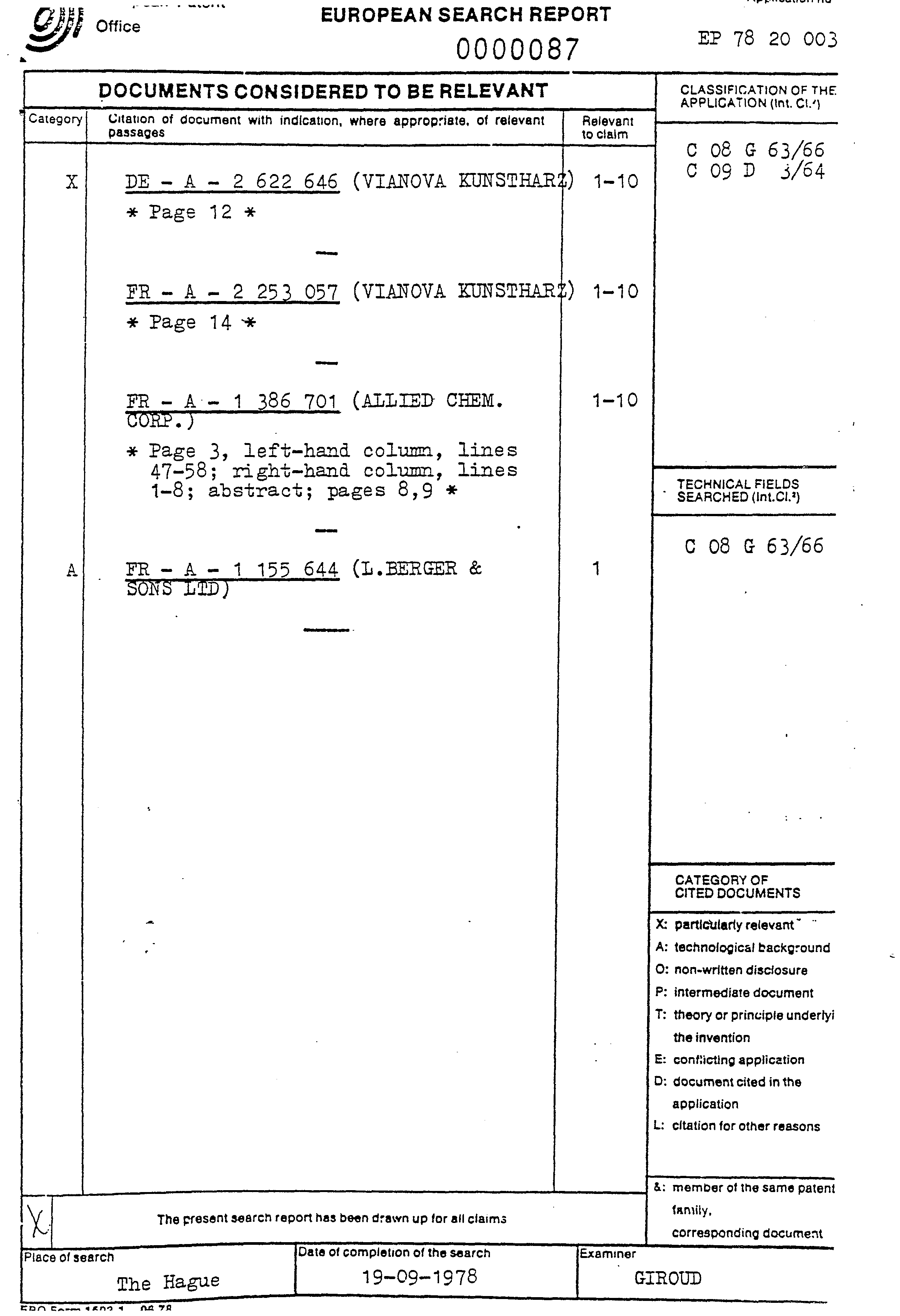