wherein n and m are together sufficient for attainment of the desired minimum molecular weight, that is, about 300. Also included are copolymers of poly-1,2-oxybutylene and polyoxyethylene glycols and poly-1,4-oxybutylene and polyoxypropylene glycols and random copolymer glycols prepared from blends of sequential addition of two or more alkylene oxides as well as glycols as described above capped with th ethylene oxide units. The polyols purified in accordance with this invention can contain arylene or cycloalkylene radicals together with the alkylene radicals. In such products the cyclic groups inserted in a polyether chain are preferably phenylene, naphthalene, or cyclohexylene radicals or those radicals containing alkyl or alkylene sub stituents as in the tolylene, phenylethylene or xylylene radicals.
[0017] The adsorbents which may be employed in the practice of this invention are those which will remove the alkaline catalysts. Preferred are the synthetic magnesium silicate adsorbents. These synthetic adsorbents may be prepared by the reaction of a magnesium salt such as magnesium sulfate with sodium silicate. The resulting products can have particle sizes ranging from 5 to 500 microns with an average particle size of about 100-200 microns. These adsorbents are sold under trademarks of "BRITE SORB" by Philadelphia Quartz Corporation, and "MAGNESOL" by Reagent Chemicals. The amount of adsorbent which can be employed depends on the concentration of catalyst present in the polyol. Thus, amounts ranging from about 0.1 percent to about 5 percent by weight based on the weight of the polyol may be employed. Preferably, however, the concentration of adsorbent ranges from about 1.0 percent to about 3.0 percent based on the weight of polyol. From an economical point of view it is preferable to use as little as possible of the adsorbent.
[0018] A filter aid may be employed in addition to the magnesium silicate adsorbent, however, this may not be necessary if the screen size on the leaf filter is sufficient to retain the magnesium silicate adsorbent. It is contemplated that any suitable leaf filter may be employed in the practice of this invention. It is especially desirable that the filter have internal heel scavenging capabilities, thus eliminating the need for an external scavenger system as was illustrated.
[0019] Among the solvents which may be employed in the practice of this invention are the aliphatic, alicyclic, aromatic hydrocarbons, dialkyl ketones, dialkyl ethers, and halogenated hydrocarbons. These include the butanes, pentanes, hexanes, heptanes, octanes, nonanes, decanes, dodecanes, cyclcpentane, cyclohexane, methylcyclohexane, benzene. toluene, acetone, methyl ethyl ketone, diethyl ether, diisopropyl ether, chloroform, carbon tetrachloride, mechylchloroform, dichlorodifluoromethane, 1,1,2-trichloro-1 2,2-trifluoroethane, trichlorofluoromethane and perchloroethylene. The preferred solvents are the aliphatic, alicyclic and aromatic hydrocarbons. The solvents may be recycled through the process as many times as desired without any detrimental effects on the polyols.
[0020] The use of the solvents results in the recovery of additional polyol which previously was lost. Furthermore, the use of solvents improves the filtration rate due to a lower polyol viscosity. Additionally, the dry filter cake is readily removable from the filter screen leaving a clean surface which can be used for subsequent filtrations without washing the screen media. The amount of solvent employed will depend upon the capacity of the equipment.
[0021] In general, a minimum of one filter volume is necessary to efficiently wash the system.
[0022] It will be obvious from the foregoing that various modifications of what has been specifically described may be utilized without departing from the invention as defined in the following claims.

(b) spray washing, with solvent selected from the group consisting of aliphatic alicyclic and aromatic hydrocarbons, dialkyl ketones, dialkyl ethers, halogenated hydrocarbons and mixtures thereof, the reactor employed for the preparation of said crude polyol,

(c) transferring said solvent to said mixture of step (a),

(d) cycling said mixture of step (c) through a filter until sufficient filter cake is deposited on said filter and a catalyst free filtrate containing said polyol is obtained, 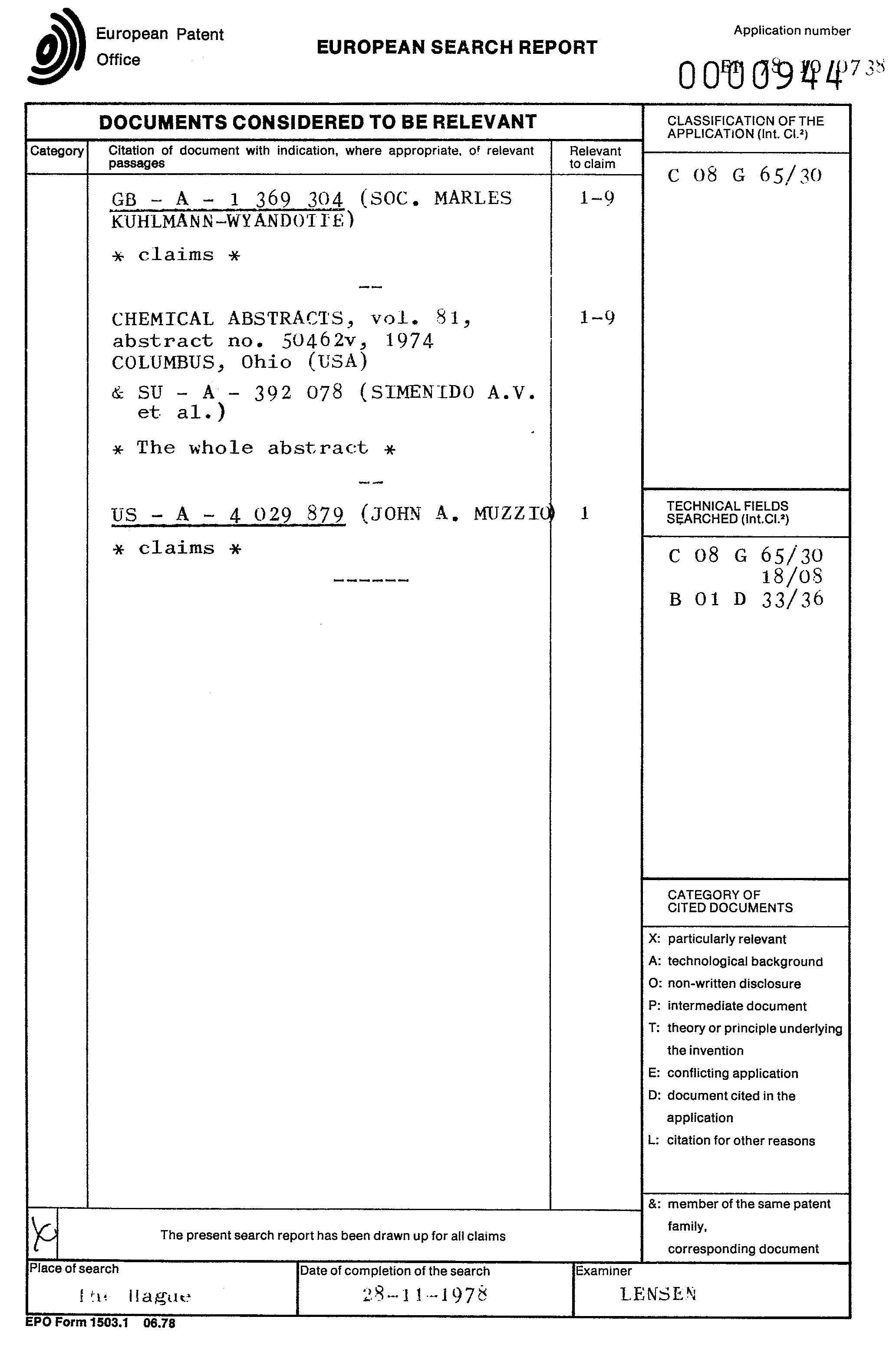