1. Aqueous mixtures of the salt and the alcohol;

2. Aqueous mixtures of till. salt and the solubilizing agent;

3. Aqueous mixtures of the alcohol and the solubilizing agent; and

4. Aqueous mixtures of the alcohol, the solubilizing agent and the salt.

[0023] Of these groups 1 and 1 arc preferred.
[0024] harticularly preferred are aqueous mixtures of cthanol and sodium chloride and especially aqueous ethanolic solutions which are substantially saturatel with sodium chloride. Specific compositions from such groups include, hut are not limited to: 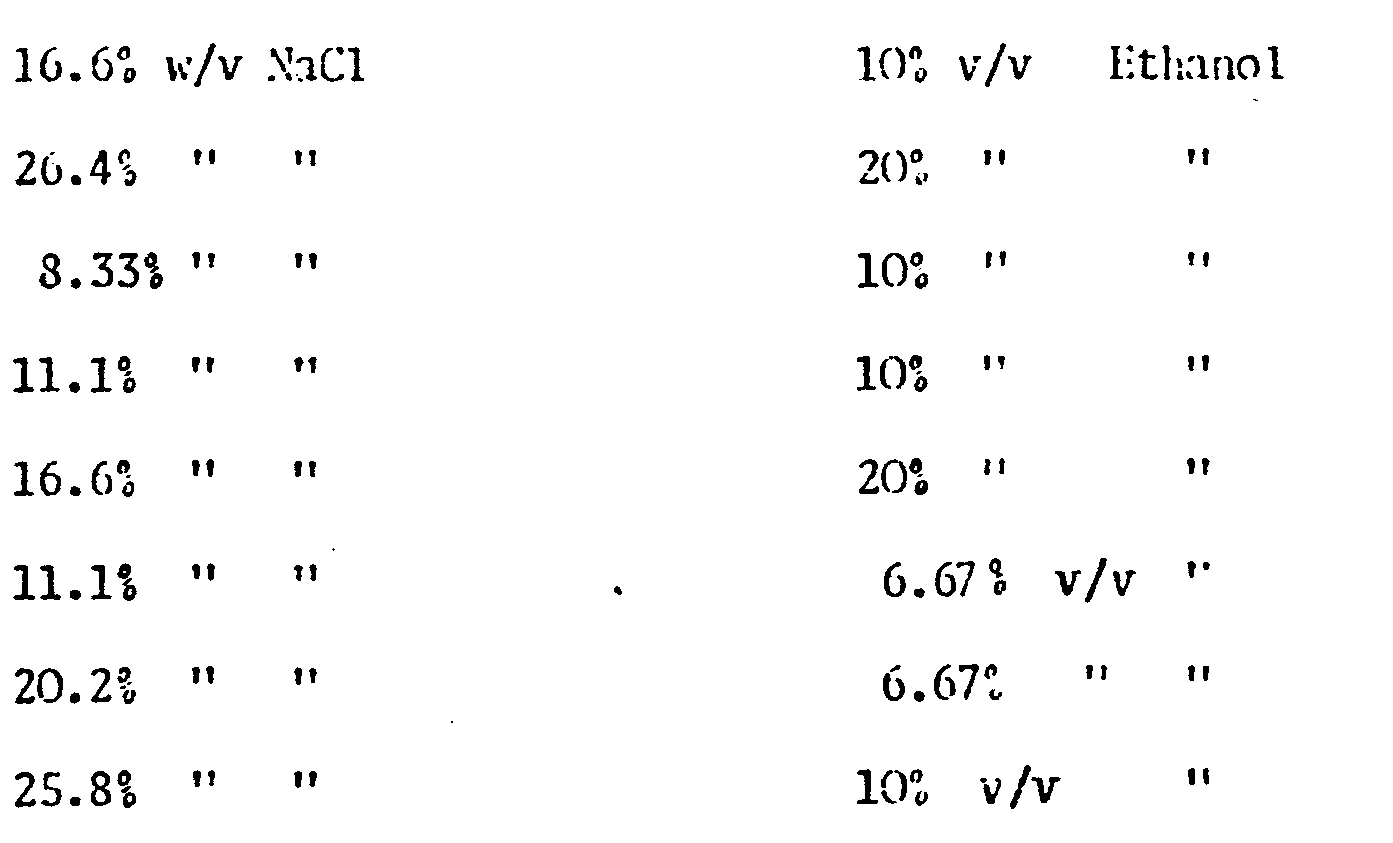 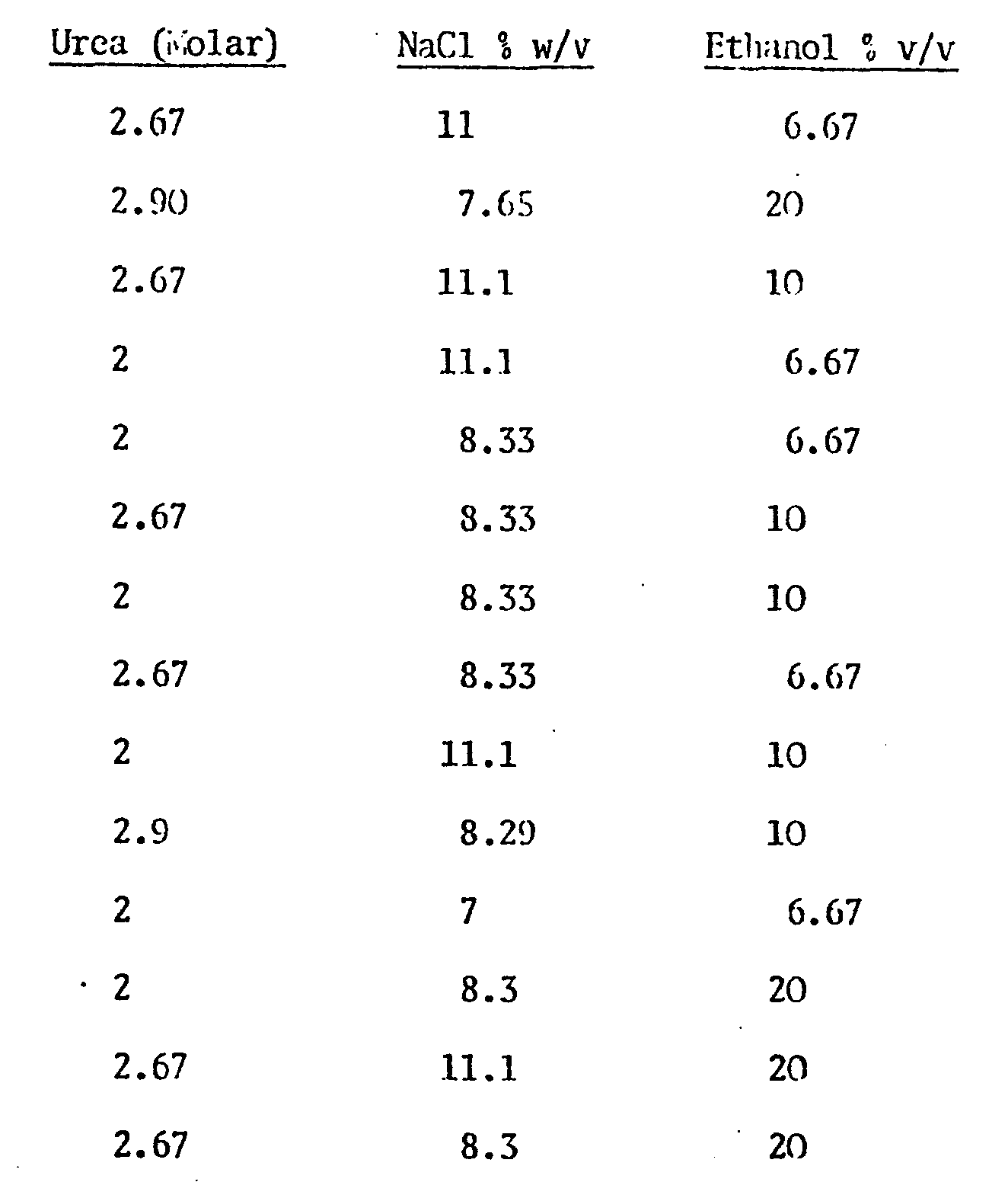 [0026] In addition to the components set out above, the compositions of the invention may contain other physiologically acceptable ingredients; for example, coinpositions for use with contact lenses may contain ingredients which are acceptable or useful in the eye; for example, opthalmic topical medications that are compatible with (for example, do not precipitate in) the chosen solution.
[0027] The concentration of the ingredients in the sterilizing solution may vary depending'on the object to be treated and the particular organisms to be removed. Thus the amount of salt employed is preferably sufficient to provide a saturated or substantially saturated solution, which amount of salt by weight will vary, depending upon the amount of alcohol present, with, of course, some variations based on the temperature. Typical concentrations of salts in the sterilizing solutions range from as high as 33% by weight sodium chloride for a fully saturated solution, alone, and typically to as low as about 5%, depending upon the amount of alcohol present, with typically the alcohol varying in amount by volume from 5% to 70%, preferably 10% to 50% and more typically between 10% to 25%. The amount of urea may vary as desired, ranging up to 8 molar, but more typically ranging from about 1 molar to about 3 molar.
[0028] The sterilizing solutions are easily prepared merely by admixing the ingredients to form a sterile, aqueous, clear solution. A preferred process is to mix ethanol and a saturated aqueous solution of sodium chloride. Of course, if desired and optionally, and apart from the active ingredients specified above, other components may be added, such as other microbial agents, buffers, lubricants, quaternary-amnonium compounds, viscosity-control agents, surfactants, wetting agents and similar active ingredients, provided that such ingredients do not alter or affect the sterilizing functions of the active ingredients.
[0029] The sterilizing solutions may be used in the treatment of soft contact lenses containing or contaminated with mixed microbial agents, and, therefore, the term 'sterilization' as used herein is directed to the sterilization of those five indicating organisms reconmended by the FDA and as tested herein for evaluation of lens-decontaminating solutions. Effective sterilization times by the solutions are measured by the hours required for total kill of the organisms, i.e. the number of hours required to obtain no survivors where the sensitivity of the assay is 10 cells per ml or less. The sterilizing solution may be used for 12 hours, (e.g. overnight storage of a lens in the solution) and more particularly for 6 hours and even more particularly for 60 minutes.
[0030] The method of use of the sterilizing solution is simple in that the wearer of the lens merely removes the lens from his eye and places it in a container with a sufficient amount of the sterilizing composition. The lens is allowed to soak for a period of at least about 30 minutes, and preferably 1 to 8 hours. This contacting of the lens may also be used to inhibit the formation of proteinaceous deposits and accumulations on the lens in use. Typically, the method of use is carried out at ambient temperatures, or at slightly elevated temperatures, if desired; for example, 20°C to 40°C.
[0031] Hard contact lenses and other medical apparatus may be sterilized by washing or imnersing the apparatus in the sterilizing solution. Such other medical apparatus may include, but not be limited to: catheters, tubes, surgical instruments and the like. The sterilizing solution may be used on medical apparatus and materials which, like the soft contact lenses, do not tolerate readily existing or harsh sterilizing methods, such as boiling, and more particularly wherein the medical apparatus and material easily exchange any liquid contained therein with a sterilizing solution.
[0032] The invention is illustrated, hut in no way limited by the following Examples in which EtOH represents ethanol.

[0033] Tests were carried out to determine the sterilizing effects of selected solutions of salt and/or urea and/or ethyl alcohol on micro-organisms. For these experiments, the final mix (cell suspension plus test solution) was designed to contain approximately 1 x 106 cells per ml. Test systems were incubated at room temperature (22°C to 25°C). Aliquots were withdrawn at designated intervals of time, as shown in the Tables, and were serially diluted in sterile 0.9% saline solution. Duplicate pour plates were made at dilutions of 10-1, 10-3 and 10 S for each sample, adding about 15 ml of cooled (45°C) Trypticase Soy Agar to 1 ml of diluted sample in a sterile Petri dish. Colonies were counted after 48 hours incubation at 37°C.
[0034] Seven combinations were selected for study of their killing capacity against each of the five organisms reconmended by the FDA for the evaluation of decontaminating solutions for contact lenses. The results of such experiments are shown in Table I. 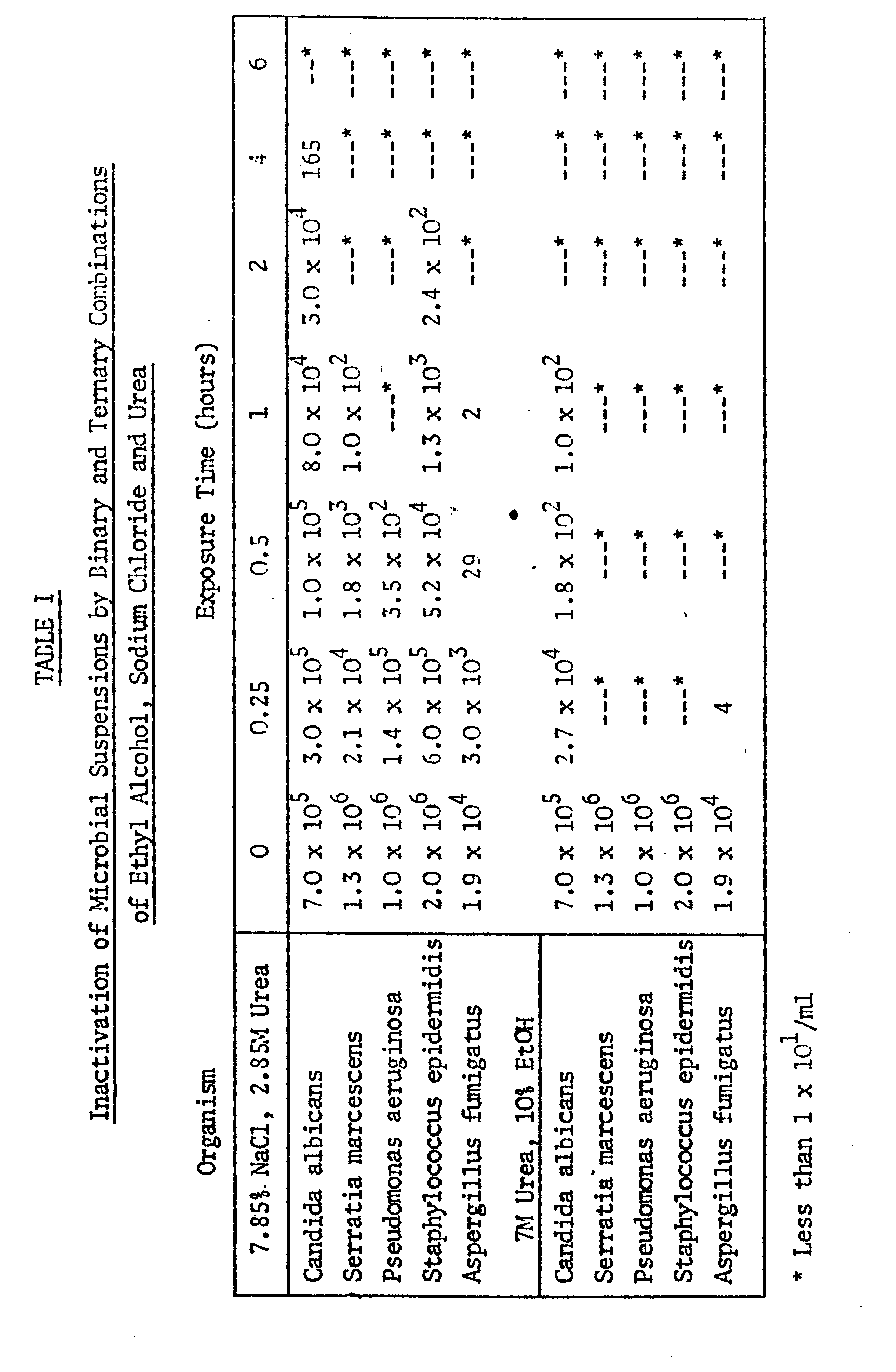 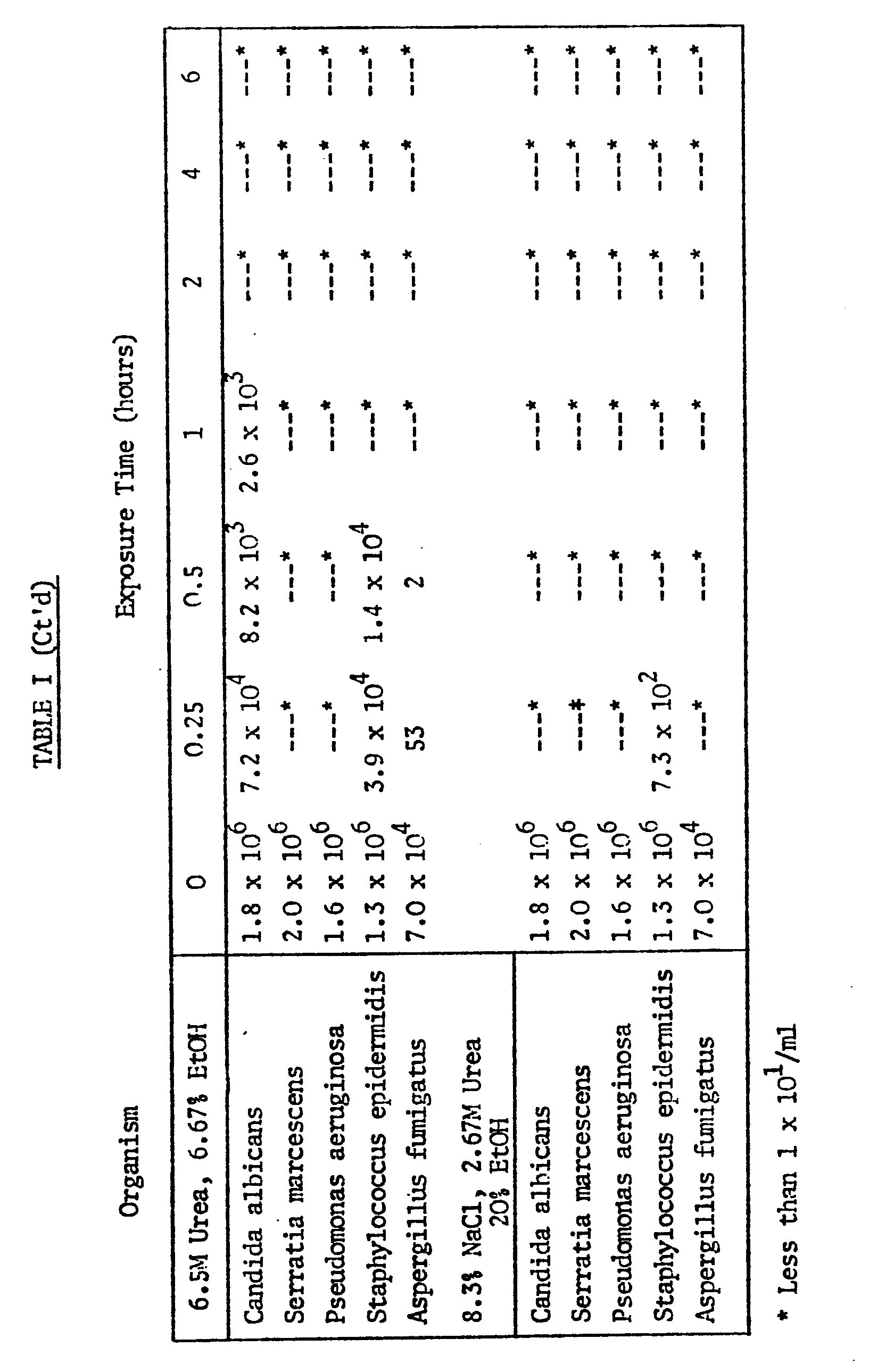 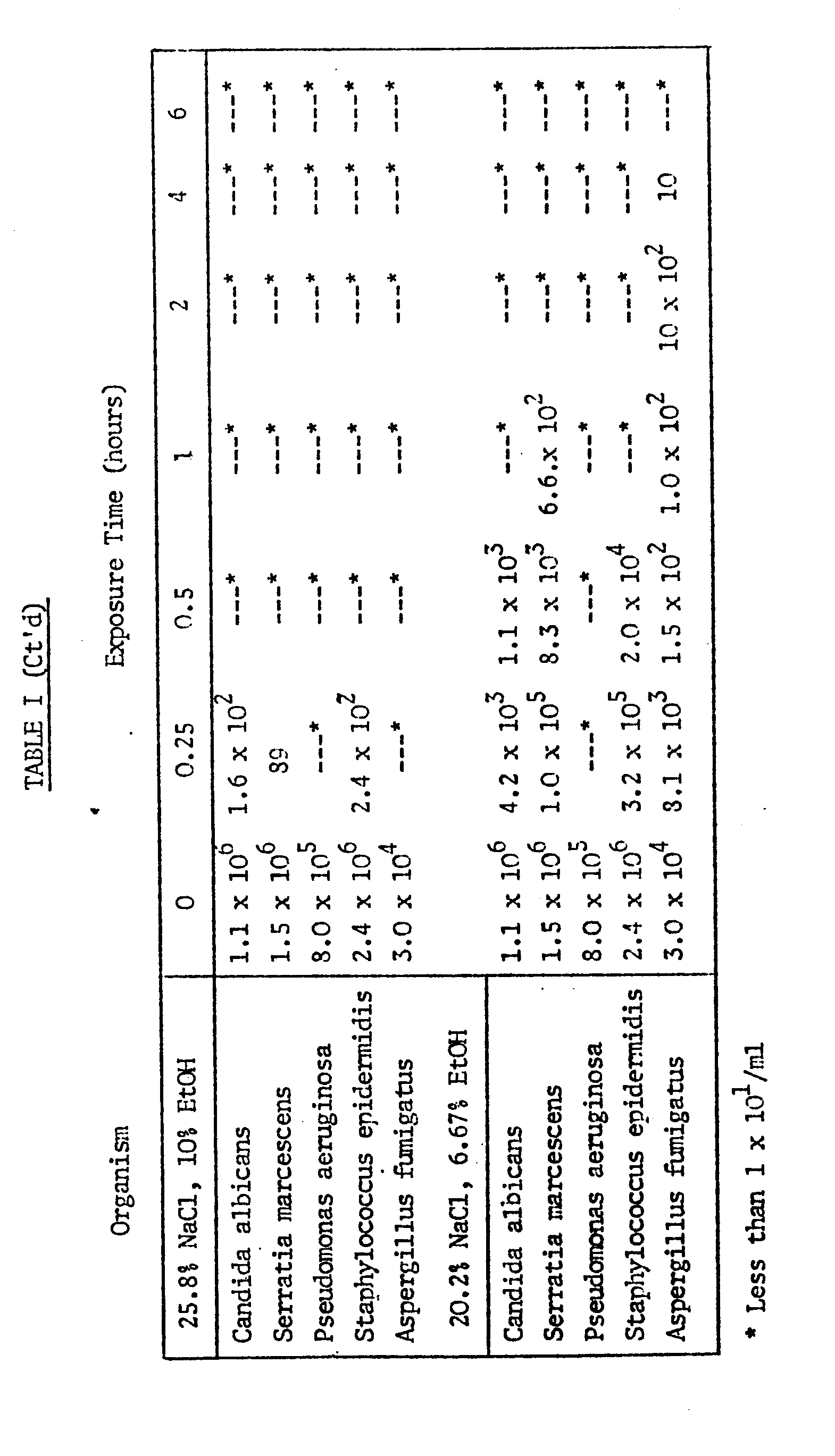 [0036] Three combinations, a binary (25.8% sodium chloride, 10% ethyl alcohol) and two ternaries (8.29% sodium chloride, 2.9CN urea, 10% ethyl alcohol; and 7.65% sodium chloride, 2.90M urea, 20% ethyl alcohol), were selected for evaluation against mixed microbial suspensions of the five indicator organisms. For all experiments, the final mix (cell suspension plus test solution) was designed to contain approximately 1 x 106 cells per ml. Sterile 0.9% (physiologic) saline was used as a control. Test systems were incubated at room temperature (22°C to 25°C) . Aliquots Mere withdrawn at designated intervals of time, as shown in the Tables, and ivere serially diluted in sterile 0.9% saline. Duplicate pour plates were made at dilutions of 10-1, 10-3 and 10-5 for each sample, adding about 15 ml of cooled (45°C) Trypticase Soy Agar to 1 ml of diluted sample in a sterile Petri dish. Colonies were counted after 48 hours of incubation of 37°C. The results are shown in Table II. 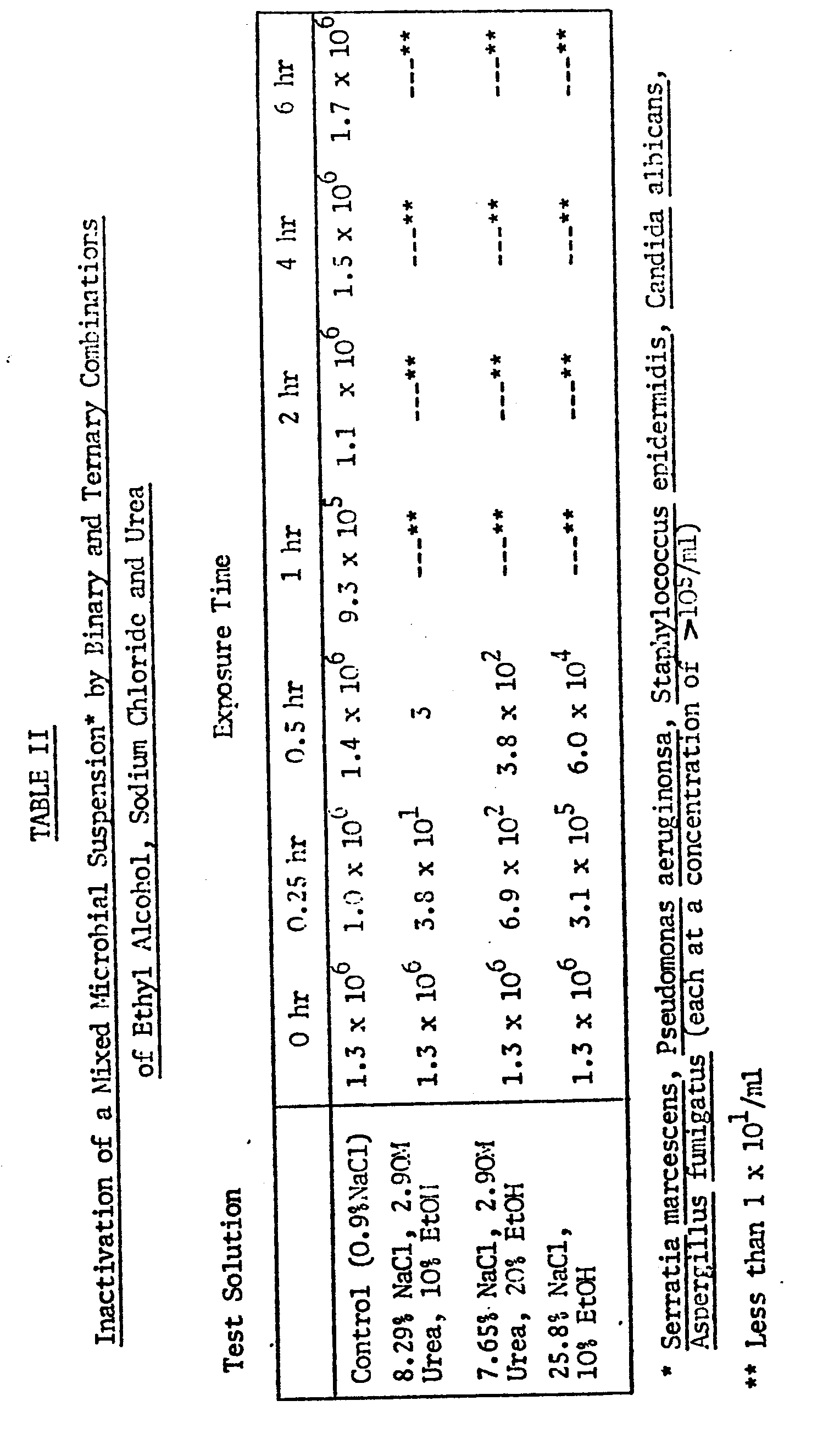 [0037] The ternary comhination of 8.90% NaCl, 2.90M urea, 10% EtOH is the most rapidly effective antimicrobial solution of the three tested. Nonetheless, all three combinations resulted in total elimination of viable micro-organisms within one hour.

[0038] Tests were carried out to evaluate the efficacy of the selected sterilizing solution on soft contact hydrogel-type lenses seeded with known levels of bacteria.
[0039] Inoculation of lenses A series of sterile, flexible, soft contact lenses (Corncal Sciences Inc) (decontaminated by boiling in physiological saline) was drained (using sterile cotton swabs for handling) and seeded (on the inner concave surface) with 5 µl of a suspension of the organisms set out in Table II (1 x 106 cells), and was allowed to dry at room temperature in a covered sterile Petri dish or covered multi-well plates for 0, 5, 10, 15 and 30 minutes. At the end of each of these time periods, a seeded lens was transferred with sterile forceps to a tube of sterile nutrient broth which was incubated at 37°C for 6 hours. Growth in the broth culture was estimated by optical density every 2 hours. The maximum drying time which allows the best growth, equal to the zero-drying-time control, was selected as a drying time to use in subsequent studies. Optimally, the time chosen should be adequate to load the lens with micro-organisms, but not so long that thc inoculum is killed by the drying.
[0040] Decontamination of seeded lenses A series of lenses (flexible soft contact lenses, Corneal Sciences Inc) was seeded with bacterial suspensions (1 x 106 cells in 1 ml , same five species as in Example 2) and was allowed to dry for 10 minutes.
[0041] Single lenses, contained in the well of a Multi-well plate, wcre filled with 1.0 ml of the test-decontaminating solutions. At 0, 0.25, 0.5, 1, 2, 4 and 6 hours, lenses were drained and transferred to a tube containing 5 ml of sterile physiological saline. After thorough agitation, the saline was serially diluted and bacterial counts were determined by the pour-plate method. The lenses were transferred to a broth tube and were incubated for 48 hours as a further sterility check. The spent decontaminating solutions were serially diluted from a starting dilution of 1:5, and pour plates were made to determine actual numbers of survivors in the solutions.
[0042] Flexsol (a trade mark of Burton Parsons Co) is a sterile, buffered, isotonic solution of sodium chloride, sodium horate, boric acid, polyvinylpyrrolidone, polyoxyethylene and polyoxygronylene, preserved with Thiomersal 0.001%, chlorhexidene 0.005% and disodium edetate 0.1%.
[0043] The results are shown in Table III. 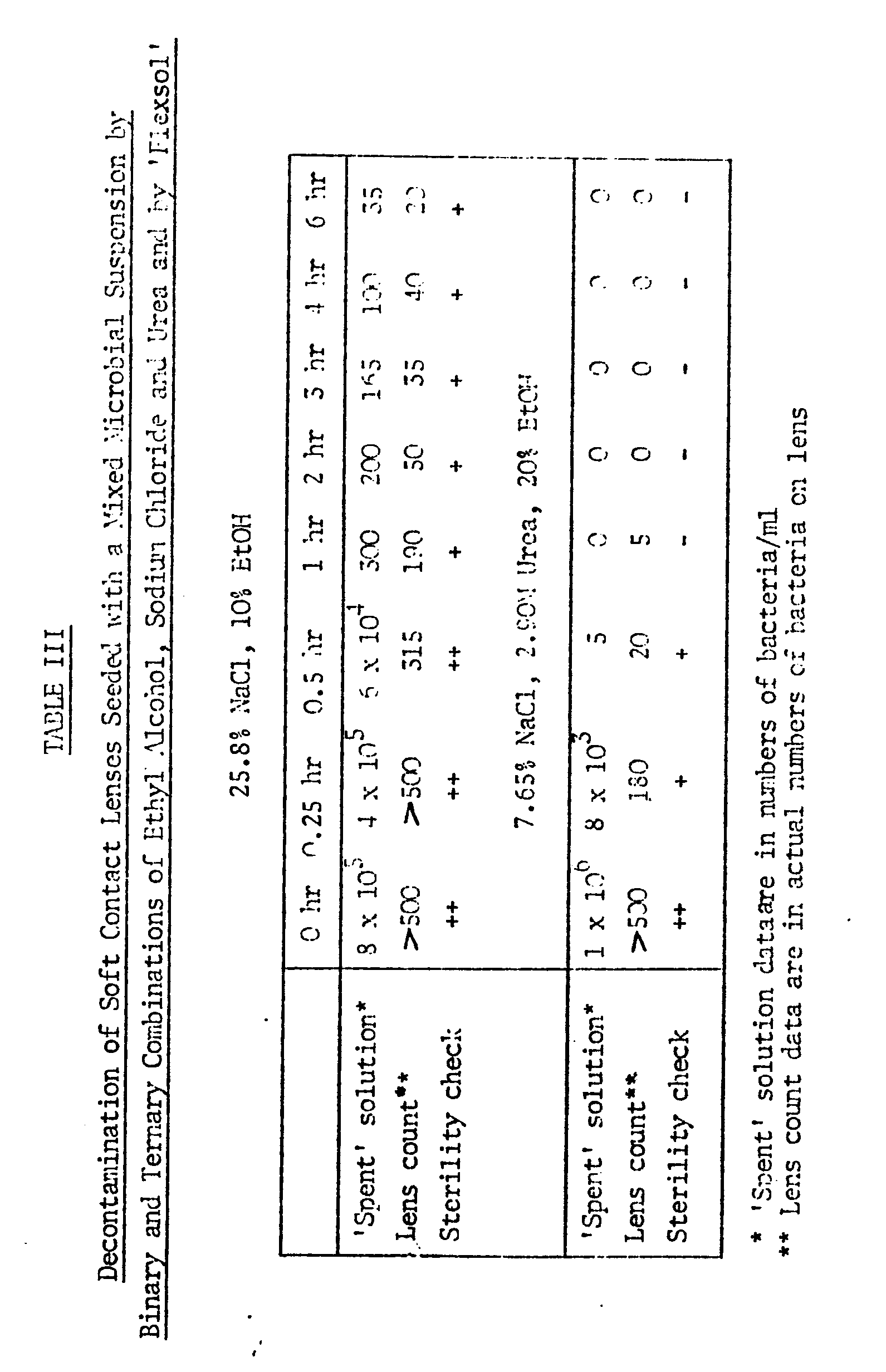 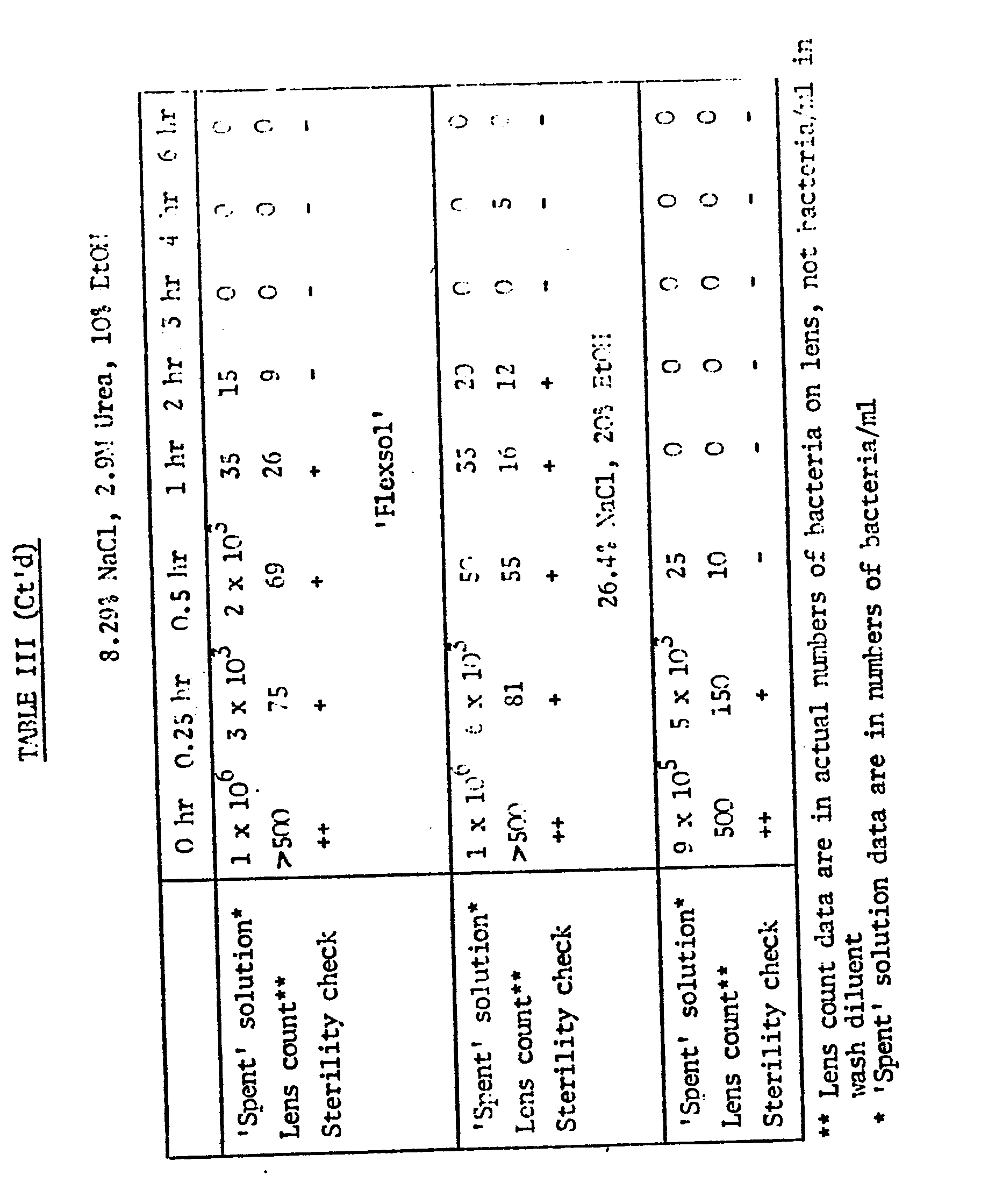 2. A solution according to Clab:1 1, characterised in that the salt is sodium chloride.

3. A solution according to Claim 1, or Claim 2 characterised in that the alcohol is ethanol.

4. A solution according to any one or the preceding claims, charactcrised in that it comprises from about 5 to 33 weight percent of the salt.

5. A solution according to any one of the preceding claims, characterised in that it comprises from about 5% to 70% by volume of the alcohol.

7. A solution according to any one of the preceding claims, characterised in that it includes a water-soltible, physiologically acceptable, protein-denaturing agent.

8. A solution according to Claim 7, characterised in that the protein denaturing agent is urea.

9. A solution according to Claim 8, characterised in that urea is present in a molar concentration of from alma 2.9 to 8 molar.

10. A solution according to any one of Claims 1 to 6, characterised in that it consists essentially of sodium chloride, ethanol and water.

11. A solution according to any one of Claims 1 to 9, characterised in that it consists essentially of sodium chloride, ethanol, water and urea.

12. A solution according to any one of the preceding claims characterised in that it is substantially saturated with respect to the salt.

14. A method according to Claim 14, cliaracterised in that the time is from about 30 minutes to 12 hours.

15. A method according to Claim 13 or Claim 14, characterised in that the object is medical apparatus.

16. A method according to any one of Claims 13 to 15, characterised in that the apparatus to be sterilized is a contact lens.

17. A method according to Claim 16, characterised in that the lens comprises a flexible, hydrogel, soft contact lens of the hydrophilic type.

19. A method according to any one of Claims 13 to 18, characterised in that the object is composed of a water-containing polymeric material capable of the exchange of water with the sterilizing solution. 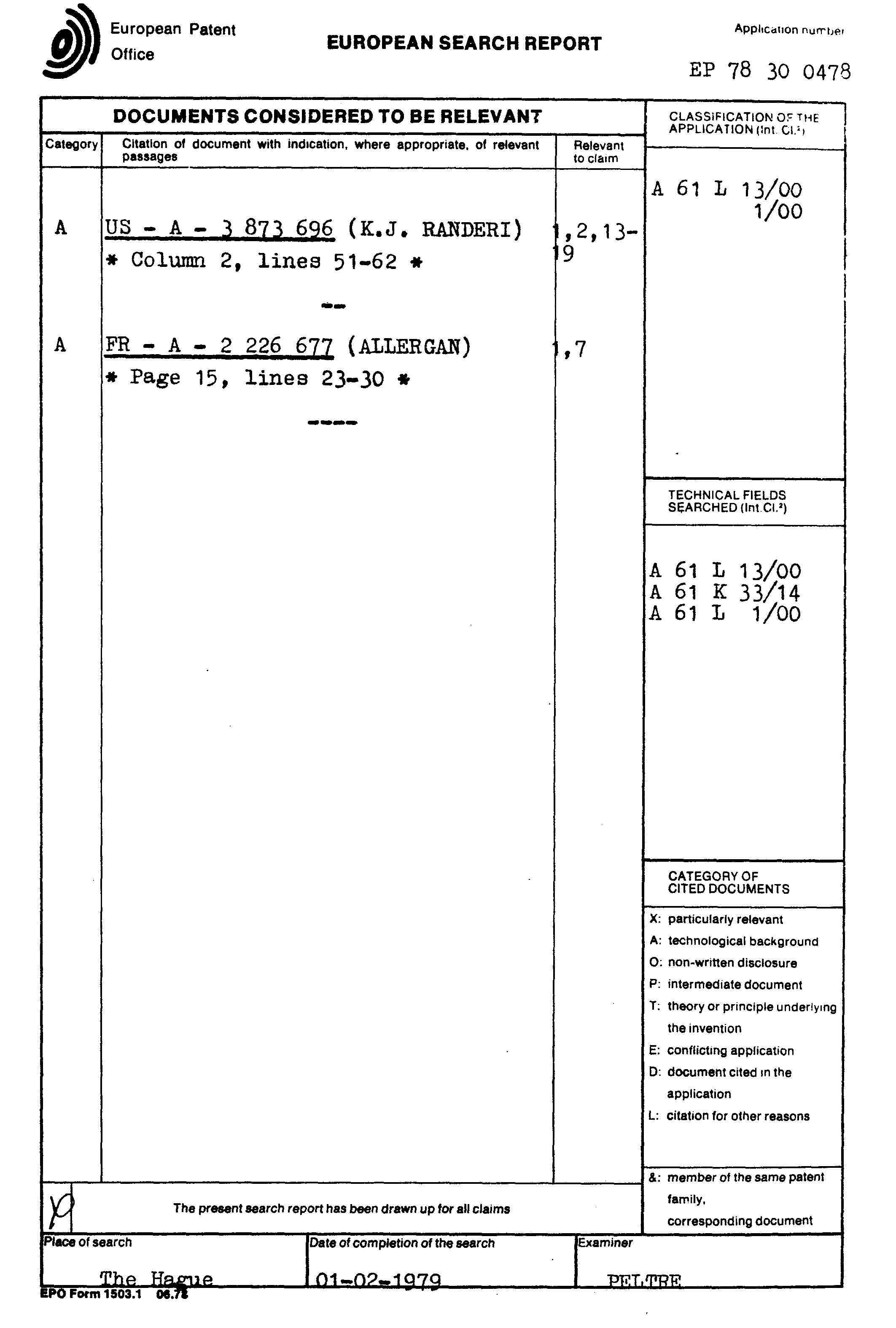