[0023] Waxes are derived from various sources: petroleum waxes covering paraffin and microcrystalline wax; synthetic waxes including polyethylene and Fischer-Tropsch-wax; natural waxes from plants, insects and animals. The petroleum and synthetic waxes are most important for the present invention.
[0024] Other than paraffinic, napthenic and aromatic hydrocarbon groups waxes can contain polar functional groups such as alcohols, ketones, and esters. It is preferred tha the waxes used in this invention be predominantly non-polar since polar functional groups function as plasticizers for the ionic sulfonate groups. Excessive plasticization is undesirable. The largest percentage of polar functional groups in waxes are those containing oxygen by virtue of hydrocarbon oxidation. For the purpose of this invention a wax is considered to be non-polar when it contains less than 4.0 wt. %, more preferably less than 2.0 wt. % oxygen.
[0025] A description of paraffinic and microcrystalline waxes is given in the Kirk-Othmer "Encyclopedia of Polymer Science and Technology; 1971, Vol. 14, pp. 768-779 and is abstracted below.
[0026] Paraffin waxes consist primarily of straight-chain saturated hydrocarbons with only a small amount of branching such as 2-methyl groups, near the end of the chain. The amount of n-alkanes in paraffin wax usually exceeds 75% and may reach almost 100%. The molecular weights of the hydrocarbons in paraffin wax range from 280 to 560 (C20-C40), with each specific wax having a range of about eight to fifteen carbon numbers.
[0027] The ranges of properties representative of several different paraffin waxes are presented in Table 2. Some of the commercial waxes included in the listed prop- perty range are also given. Paraffin waxes are generally lower melting, have lower molecular weights, and have lower viscosities when liquid than microcrystalline waxes. Paraffin waxes, in the solid state, exist in the form of large, distinct crystals, in contrast to the microscopic crystals of microcrystalline waxes. Physical properties of paraffin wax of an average molecular weight of 400 are listed in Table 3. Paraffin wax is soluble in non-polar organic solvents such as benzene, chloroform, carbon tetrachldride, and naphtha, and insoluble in polar solvents such as water and methanol. 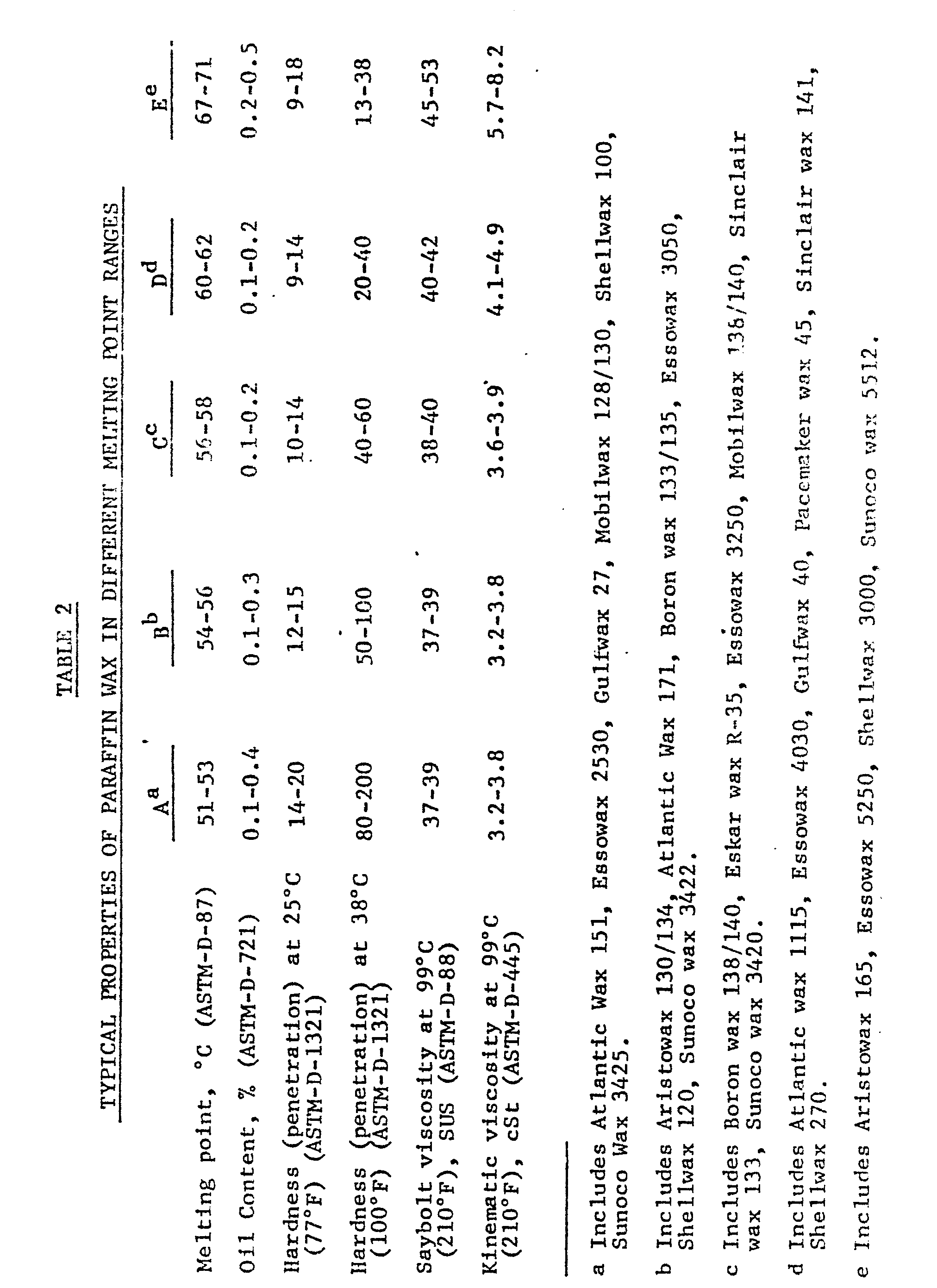 [0030] The waxes are incorporated into the blend composition at a concentration level of 2 to 20 wt. %, more preferably 5 to 15 wt. %; and most preferably 7 to 15 wt. %.
[0031] The waxes employed in the present invention usually have a softening point of 125°F to 220°F, more preferably 135°F to 200°F, and most preferably 150°F to 200°F-. The preferred waxes have an Mn of 300 to 4000. Some of the typical waxes are described in Table 2. These waxes are typically crystalline wherein the percent crystallinity can vary depending on the composition of the wax and the Mn.
[0032] The incorporation of the waxes at the levels described in this invention imparts some beneficial and surprising characteristics to the sulfonated elastomeric compounds. Those benefits include a significant reduction of melt viscosity at elevated temperature for these compounds, with little sacrifice in physical properties at ambient temperatures, a reduction in tack at room temperature, and a substantial improvement in the resistance of these sulfonated EPDM based compounds to moisture during prolonged immersion. This latter characteristic is of substantial importance because these ionic elastomers can pick up as much as 30 to 50 wt. % moisture after prolonged immersion at 50°C. In contrast the incorporation of a suitable wax at a sufficient level will markedly reduce the level of water sensitivity. The magnitude of this improvement is believed to depend on the amount of wax incorporated.
[0033] In addition to these improvements, it is observed that the addition of modest levels of wax to sulfonated elastomer compounds improves the extrusion behavior at elevated temperatures by providing a more uniform flow than is obtained in the absence of wax. This improvement is detectable at a relatively low level of wax, from 2 to 15 wt. % based on compound.
[0034] The ingredients incorporated into the blend compositions of the present invention, in conjunction with the type of elastomeric polymer, the degree of sulfonation, and the metal counterion of the neutralized sulfonated elastomeric.polymer and the plasticizer give materials processable by extrusion or injection molding processes into elastomeric articles having the desirable physical and rheological properties.
[0035] The advantages of both the rheological and physi- 'cal properties of the blend compositions of the present invention can be more readily appreciated by reference to the following examples and tables. Unless otherwise specified, all measurements are in parts per hundred by weight.

[0036] One hundred grams of an EPDM terpolymer, Vistalon 2504-20, was dissolved under agitation in 1000 ml. of n-hexane at 40°C. The resultant cement was cooled to room temperature and 5.74 ml. of acetic anhydride (60.75 mmoles) was then added. While stirring the mixture, 2.1 ml. of 95% H2SO4 (37.5 mmcles) was added dropwise. The sulfonation reaction was quenched after 30 minutes with 150 ml. of isopropanol. The acid form of the sulfonated polymer was analyzed by Dietert Sulfur Analysis to have 33 meq. of SO3H groups per 100 grams of sulfonated polymer. To the quenched sulfonated cement was added with stirring for thirty minutes 25.6 grams (90 mmoles/100 grams of EPDM) of stearic acid. I A solution of 9.87 grams (90 meq./100 g. of EPDM) of zinc acetate dihydrate dissolved in 25 ml. of distilled water was then added in the cement and the cement stirred for an additional 30 minutes. Antioxidant 2246 (0.5 grams) was then added to the cement. The resultant plasticized, neutralized sulfonated EPDM terpolymer was then isolated by steam stripping and drying on a rubber mill at 220°F., wherein the sulfonated terpolymer has an apparent viscosity at 0.73 sec-1 at 200°C. of about 3.3 x 105 poise. This material was incapable of being injection molded on a low pressure Desma machine equipped with a standard canvas footwear type mold.

[0037] The sulfonated EPDM gum was prepared in an identical manner as,described in Example 1. The polymer was . blended with several different waxes by blending 10 parts of wax with 100 parts of Sulfo EPDM in a suitable Brabender mixing head at a temperature of about 175°C. until a smooth homogeneous dispersion was obtained, for a total of about 10-15 minutes. The resulting viscous melt was then sheeted out on a warm (~200°F.) two roll mill. The waxes employed are described in Table 4.

[0038] The melt index of the wax-Sulfo EPDM blends was measured at 190°C, at a pressure of 226 psi. The relative flow values were obtained through a weight measurement of the extrudate after the equivalent of 10 minutes. 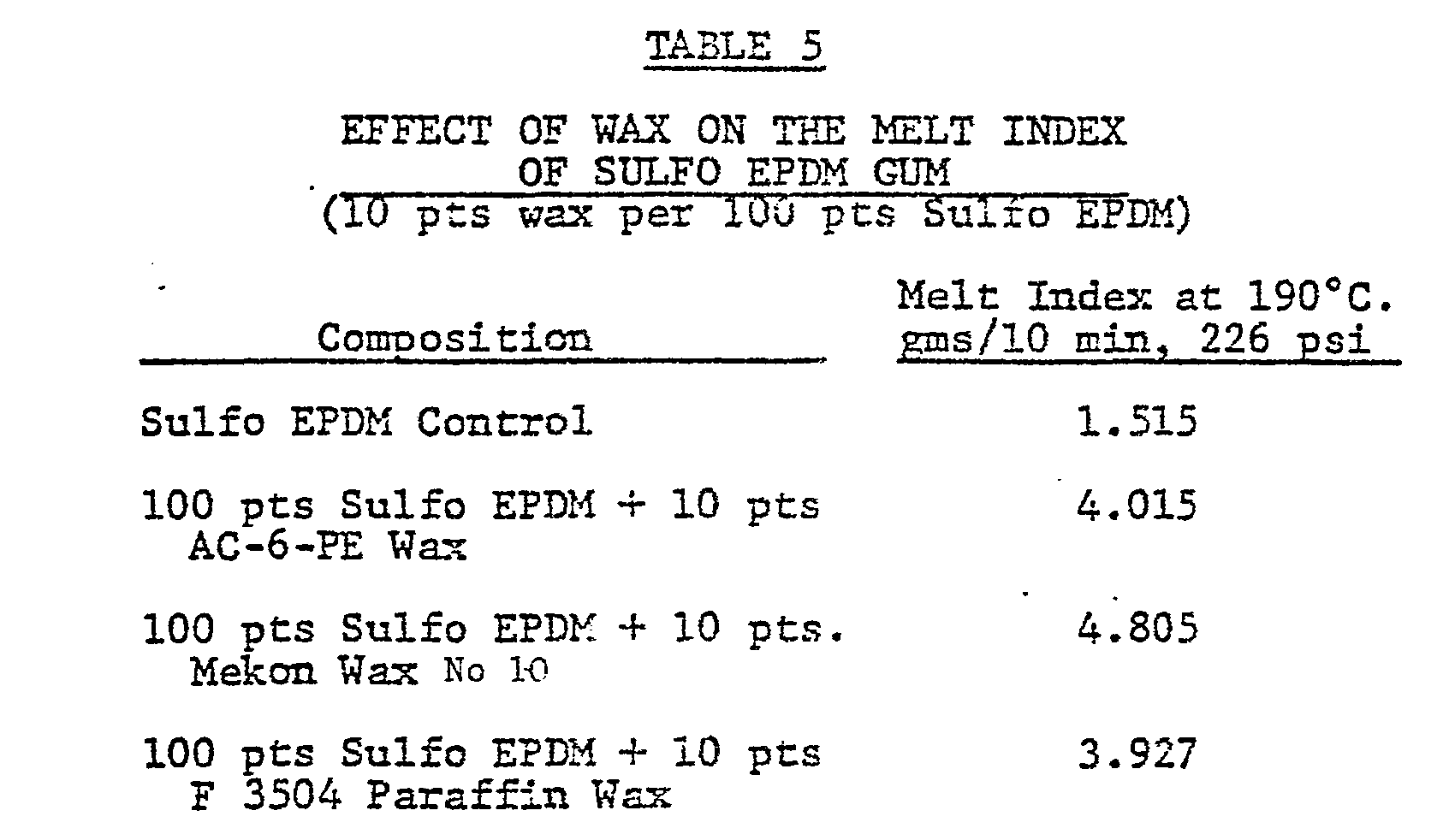 [0039] It is evident from the data in Table 5 that the incorporation of moderate wax levels substantially enhances the flow behavior of the Sulfo EPDM gum. This characteristic is very desirable because such sulfonated elastomers can possess undesirably high melt viscosities.

[0040] One of the undesirable characteristics of ionic elastomers in general, and sulfonated elastomer in particular, is that they can display a significant degree of water sensitivity. The incorporation of the types of waxes described in this application surprisingly reduces the degree of water sensitivity. The amount of wax incorporated in these blends will have an effect on the degree of improvement in water sensitivity observed. A series of wax-Sulfo EPDM blends was prepared as described in Example 2, except in these cases significantly higher levels of wax were incorporated in order to assess the effect more rapidly. The resultant blends were then compression molded at 300°F. to form pads about .020 inches thick. These pads were weighed and then immersed in water at 50°C. for a period of 21 days. After that time period the pads were removed, surface moisture blotted off, and then weighed. The increase in weight was determined in terms of weight percent increased over the original pad weight. The values are given in Table 6. 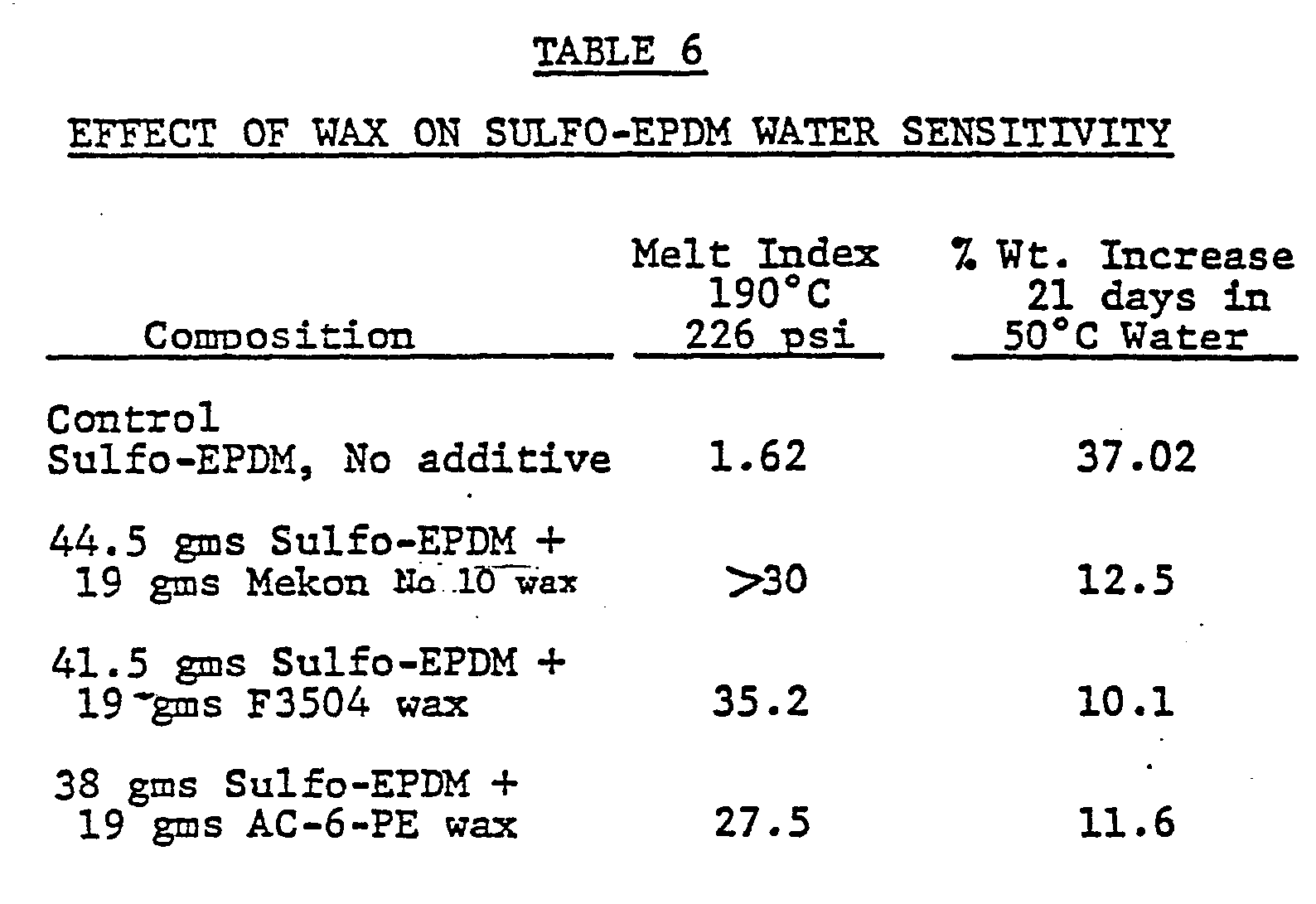 [0041] It is clearly evident that the presence of the various waxes markedly reduce the degree of water sensitivity of the blends as contrasted to Sulfo-EPDM Control.

[0042] The sulfonated EPDM described in Example 1 was employed to make two compounds A and B having the following formulation:

[0043] Formulation B contained 15 pts of paraffin wax on about 5 weight percent. The formulations above were prepared employing conventional rubber compounding equipment and the melt rheology and physical properties compared as shown in Table 7. 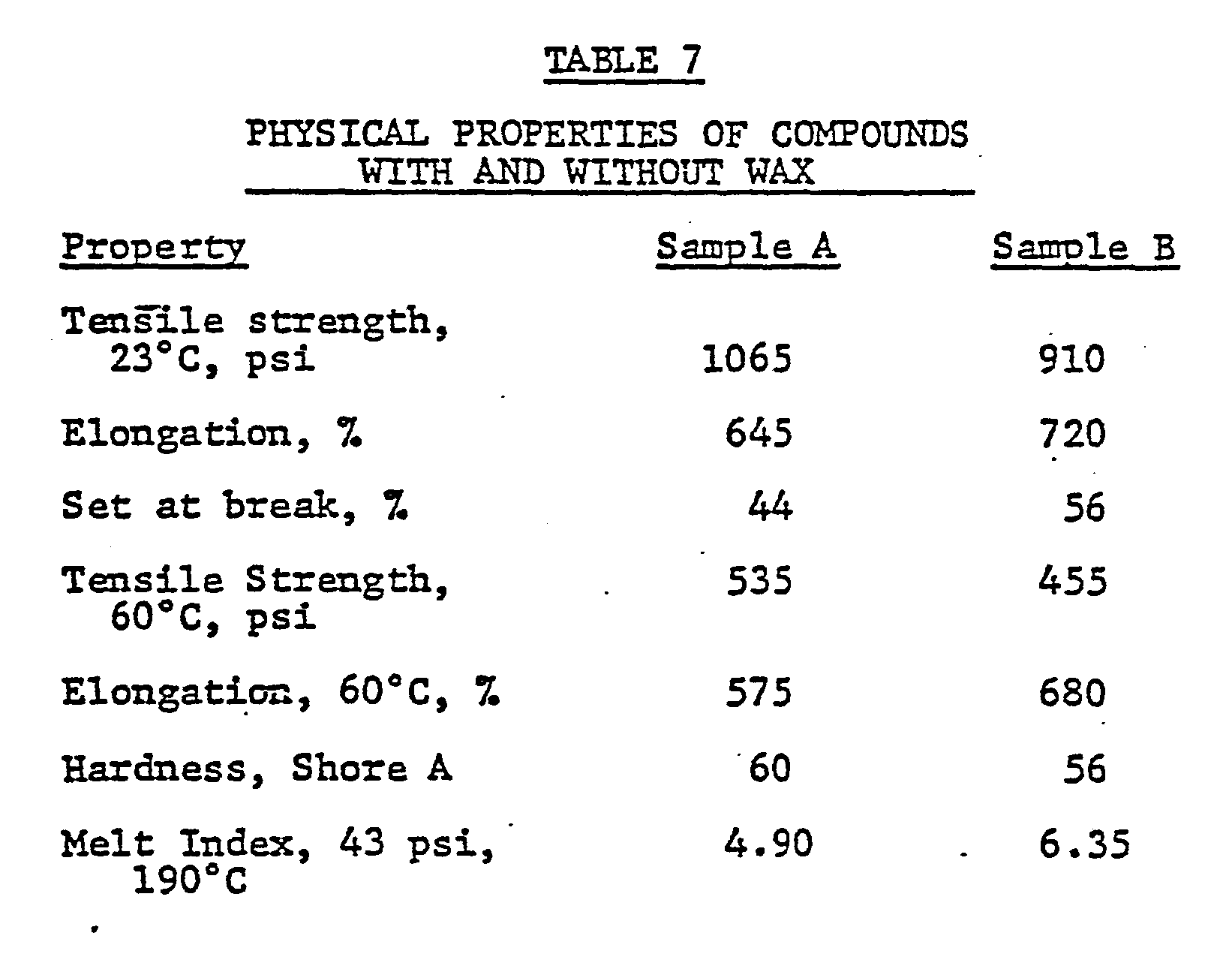 [0044] It is evident that the presence of small amounts of wax can improve the flow behavior significantly (over 20%) without a substantial deterioration in physical properties. For many injection molding applications this improvement in flew can be extremely important.

[0045] The preparaticn of sulfonated EPDM was effected as described in Example 1 except that the gum was extended with about 40 parts of Sunpar 180 oil. This oil extended gum was then compounded with other ingredients as follows: 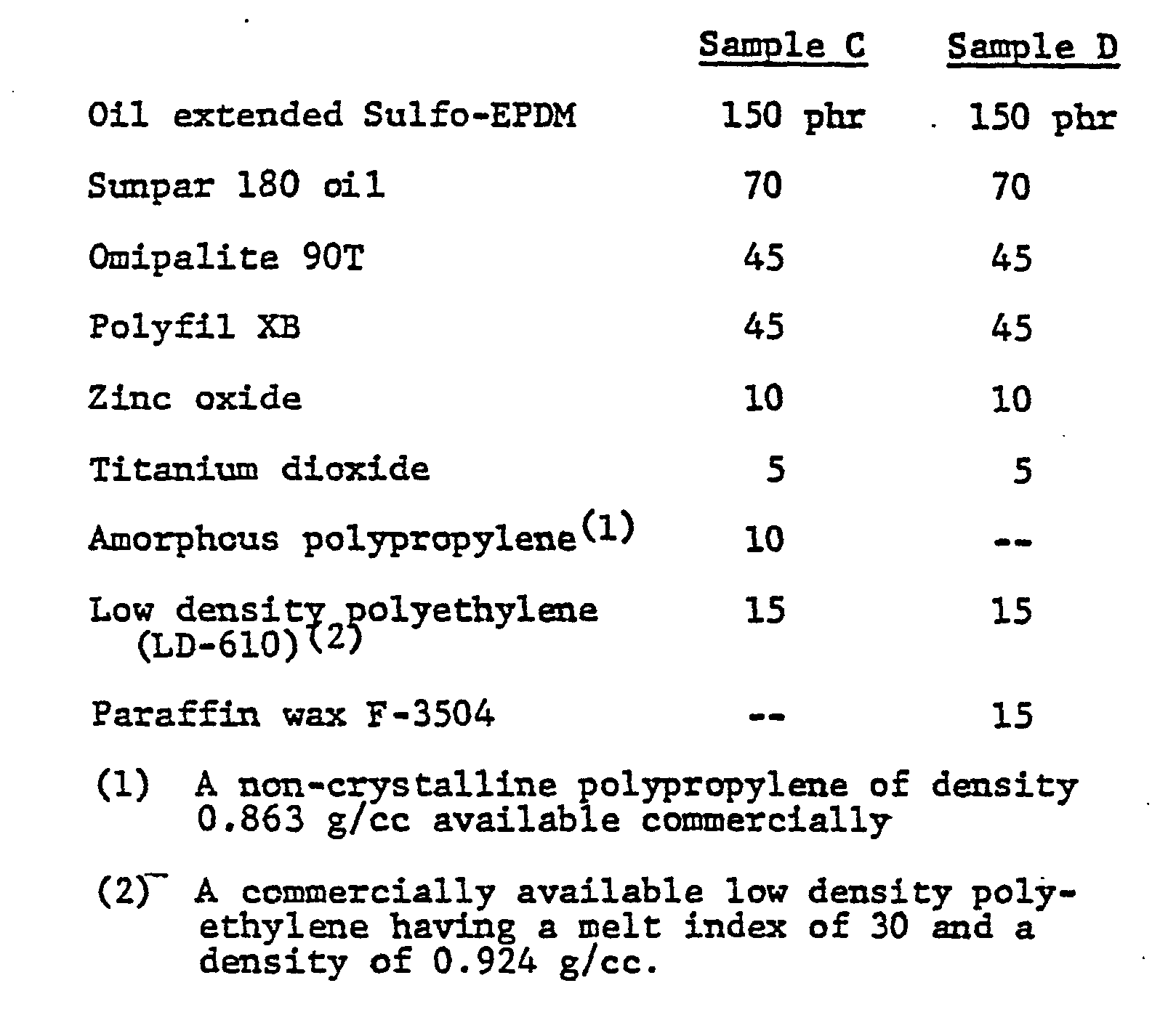 [0046] The compcunds were prepared in conventional rubber compounding equipment and the resulting homogeneous elastcmeric products were compression molded at 300°F. and the physical properties measured as shown in Table 8. 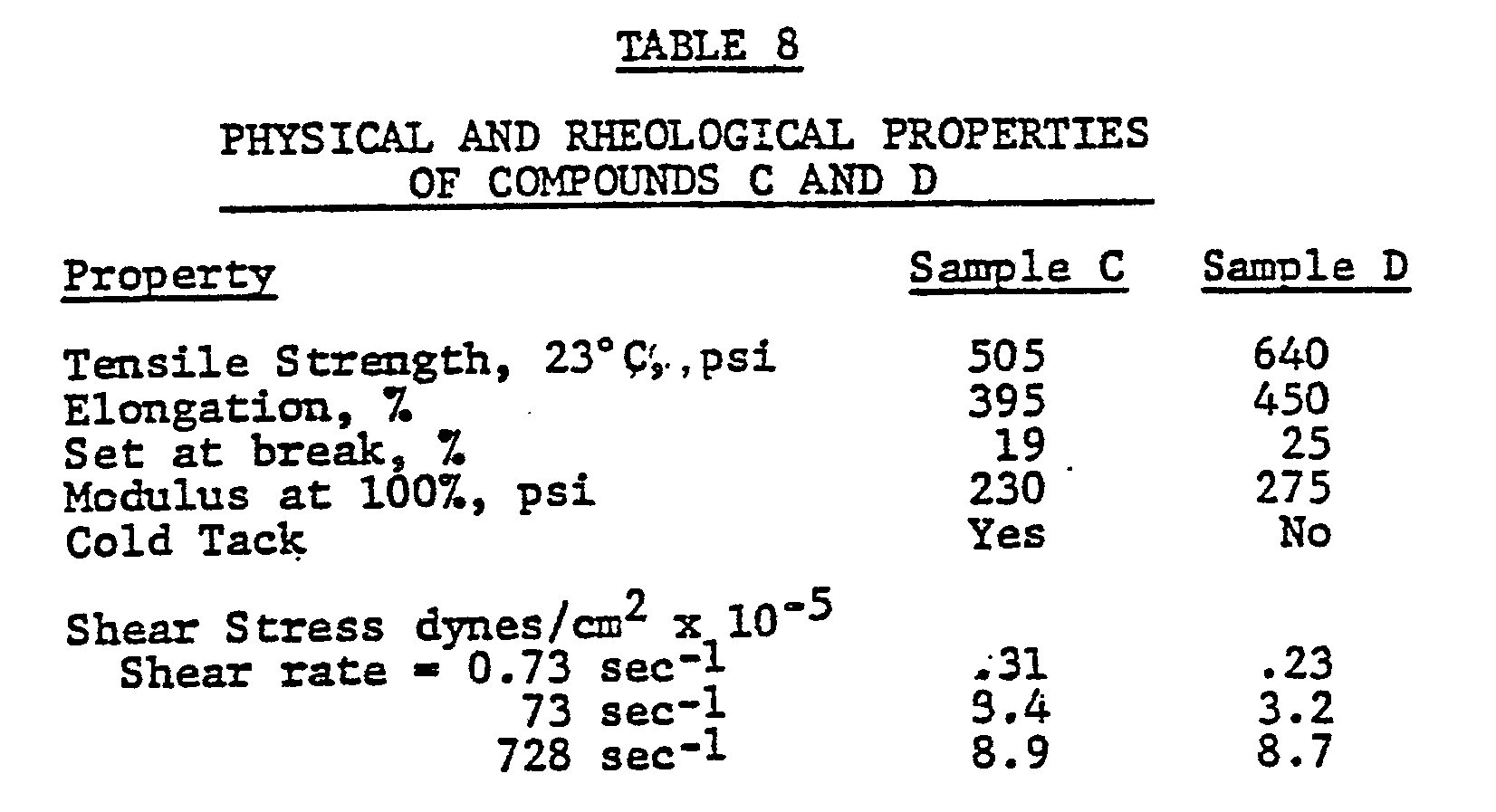 [0047] The data in Table 8 demonstrate the influence of amorphous polypropylene and a paraffinic wax on the physical and rheological properties of a Sulfo-EPDM based compound. There are several surprising and important: observations to be made from this comparison. The first one is that the compound containing the paraffinic wax at the low levels employed again improves the flow behavior, (although only slightly) as judged by the lower shear stress at a given shear rate, while simultaneously exhibiting improved physical properties when compared against the compound containing the amorphous polypropylene.
[0048] A second observation is that the sample containing the amorphous polypropylene exhibits a tacky surface. This characteristic is often observed in soft compounds based on ionic elastomers at high oil extension levels. The presence of the low levels of wax shown in this example markedly improve this characteristic such that no significant level of tack is observed.
[0049] The experiments above demonstrate that modest levels of wax can improve the flow and physical properties of sulfonated elastomers in important and surprising ways. In addition such waxes have the added benefit of reducing the degree of water sensitivity and tackiness often observed in such systems.
[0050] Since many modifications and variations of this invention may be made without departing from the spirit or scope of the invention thereof, it is not intended to limit the spirit or scope thereof to the specific examples thereof.

1. An elastomeric blend composition, which comprises:

(b) a minor portion by weight of a non-polar wax at a concentration level of from 1 to 20 weight percent of the composition. 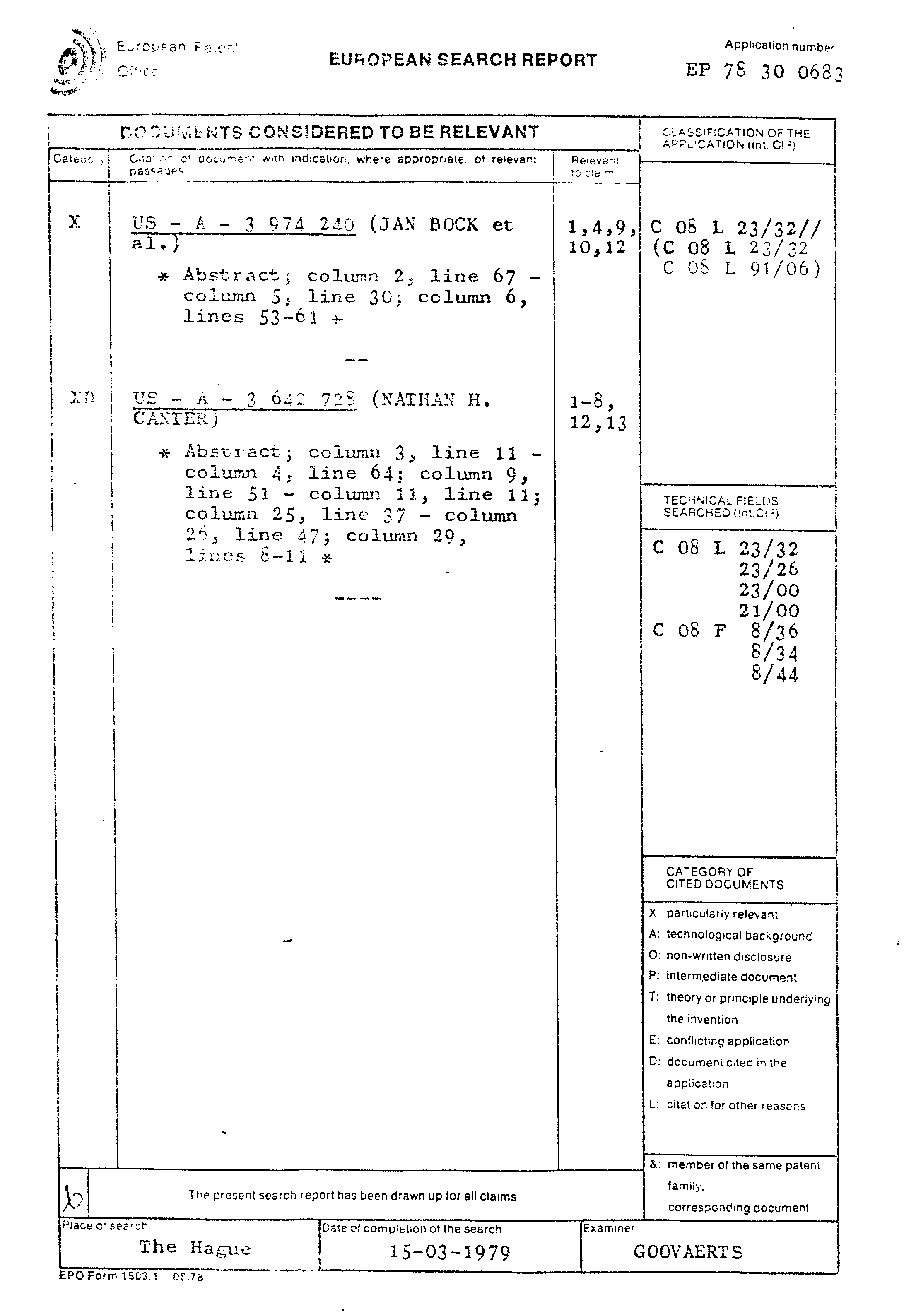