[0001] The invention relates to a process for the manufacture of articles from a water-hardening material that has been reinforced with fibrillated organic films.
[0002] The term 'water-hardening material' denotes a material consisting of a dry or virtually dry binder and, optionally, aggregates that can be hardened or bound into a solid rigid mass by a reaction between the binder and water. The term also applies to the hardened material after setting.
[0003] Suitable binders are, for example, various types of cement, gypsum and other similar materials, such as Portland cement, aluminium cement, plaster of Paris and anhydrite.
[0004] The use of both man-made and natural reinforcirgfibres in water-hardening material is well known. The fibres may be either randomly distributed throughout the material or incorporated as layers of loose fibres.
[0005] Continuous processes are also known for the manufacture of articles from water-hardening material incorporating fibrous reinforcement, such as asbestos-cement products. Asbestos cement, however, has the great drawback that the asbestos fibres used in it constitute a serious health hazard. For this reason many attempts have been made at devising substitutes with at least the same mechanical properties. In view of the many and high demands made on such substitutes as regards both price and properties, it is not surprising to find that these attempts have failed. Consequently, there was a great need of a continuous process for reinforcing a water-hardening material, which ought to be low in price and, at the same time, of excellent properties.
[0006] The object of the invention is to provide a continuous process for the manufacture of articles consisting of water-hardening material with reinforcing material that is both attractive economically and sufficiently flexible with respect to the content of reinforcing material and the composition of the final shaped article. A further object of the invention is to provide a process that yield products of excellent mechanical properties that are comparable or superior to those of asbestos-cement products.
[0007] The present invention is characterized in that the process comprises the following steps:

a. forming continuous lengths of networks from fibrillated organic films, each containing a plurality of meshes;

c. shaping said composite layer into the desired configuration and allowing it to set.

[0008] The products obtained by the present process cannot be made in the conventional manner used in the manufacture of asbestos cement, when a suspension and fibres are mixed homogeneously in conventional rotating mixing equipment, the whole is processed into layers and hardened. Yet the present invention also effects that the layer is obtained in one operation without the need of a time-consuming and expensive building-up method. Also in the manufacture of asbestos cement, the reinforcement of asbestos fibres can be applied two- dimensionally, i.e. in separate layers, but then the layers must be built up individually to form a composite layer.
[0009] The word networks should be understood to mean the net-like structure resulting from the enlargement of the fibrillated organic film in a direction somewhat lateral to the direction of fibrillation. The term mesh will be used herein to denote the void areas within and defined by the fibres of the network.
[0010] The number of meshes in the networks of fibrillated organic films per unit volume depends on the number of networks, preferably at least five, per unit thickness, on the number, the size and the type of meshes per network, and the extent to which the networks have been enlarged in size. All these factors must preferably be so chosen that the number of meshes in the organic films is at least 100 per cm3 of the end product. Better values are obtained if the number of meshes are at least 200. It is possible to choose an even higher number, e.g. a number of over 300, or, very particularly, a number of over 500. A special result will then be that the bending behaviour of the shaped articles is very favourable. As a result, very fine multiple cracking occurs during the pseudoplastic deformation. A favourable effect is that the article can regain its former shape better and that some physical properties are retained better. Multiple cracking denotes the phenomenon that an article, when bent or stretched, shows discrete cracks less than 10 mm apart.
[0011] These cracks are generally smaller than 0.3 mm.
[0012] The number of networks per cm thickness is preferably greater than 10, in particular, greater than 25. The best results are obtained if the number of networks is over 50.
[0013] The number of meshes in the fibrillated stretched organic network, which may have been enlarged in size, is preferably at least 2 per cm2, particularly at least 3 per cm2. This number is determined by the enlargement of the fibrillated film and the number of initial meshes, both broadwise and lengthwise. The enlargement, which may be effected broadwise and lengthwise, must preferably be 1

Fig. 1 is a diagram of a device by means of which the process according to the present application can be carried out.

Fig. 2 is a bending curve measured on product obtained in accordance with the example.

[0042] The stretched and fibrillated film (1) is payed out from reel (2) as a continuous web, after which it is given the desired width by means of spreader (3) consisting of a curved surface in combination with a wedge-shaped chain belt (not shown). The networks may be supplied together from one reel or several reels (not shown in the figure). If so desired, a film of, e.g., another plastics material (4), which may be provided with meshes, has already been supplied from reel (5). In this case the network can be attached to the film by fixing device (7) by the supply of glue and/or attaching this fibrous network to the film by heating, e.g. by means of hot objects and/or hot air. Next, Portland cement, sand and water are fed in through conduits (6). In a variant embodiment of the present invention, a film with a small mesh area (9) is incorporated in the material from reel (10), after which one or more networks (11) can be applied to the whole from reel (8) in the way described. In these places, too, water-hardening material and water (6) are applied by spraying, pouring or sprinkling. The resulting layer can then be subjected to pressure to effect proper mechanical binding between the networks and cement layer. Finally, the layer is given its final shape in device (12), if necessary, by compressing and cutting, and then hardened in hardening device (13). This final shape may be a sheet, but also other shapes are possible, such as tube, corrugated sheet, box or other types.
[0043] The unhardened layer obtained may also be processed into tubes or other articles by wrapping this layer around a mandrel or other mould by rotating this mould. This can be effected continuously by translating the mandrel at low speed during the rotation. Next, the continuous tube obtained may, for instance, be sawn or cut in pieces and allowed to set. It is also possible to apply several such layers around the mandrel at various angles. This will give an improved strength of the article. The water-hardening mass can be applied to the networks as a suspension by passing the networks through a bath containing the suspension. It will then be necessary that the mixture of water-hardening material, aggregate and water contains a surface-active agent in an amount of 0.01 to 5 % by weight relative to the whole, particularly between 0.05 and 4 % by weight. Examples of suitable surface-active substance are sulphonated ureaformaldehyde resins, cellulose derivatives and sulphonated melamineformaldehyde resins. The suspension may also be sprayed onto the networks. It is furthermore possible to supply one or more components separately. Although the number of meshes must also be at least 100, particularly at least 200 per cm3 in this winding method of producing articles, a network is preferably chosen whose dimensions have been enlarged comparatively little. When the network has been stretched lengthwise, the widening will be less than 100 %. During the formation of the layers, excess water, if any, can be removed by means of suction devices (14). If so desired, the entire pack of layers can be supported by an endless rotating belt, e.g., of felt or another supporting, preferably porous material (not shown).
[0044] The materials obtained have properties that, at least in some respects, are much better than those of conventional asbestos . cement. The product according to the invention shows a smooth bending curve, see Fig. 2 (in which the load is plotted against the deflection), which implies that very fine multiple cracking occurs. This property is of great importance in the application of the products. The advantage of the materials obtained according to the present invention is not only the improved properties, but also the many unexpected variations that are made possible by the process of the present application. The product furthermore offers the advantage that it is easy to cut and to work. It can be nailed and screwed without the risk of breaking or tearing.
[0045] The products obtained according to the present invention can be used in places in which no asbestos cement has been used so far, because of the restrictions imposed by its properties. The uses are mainly found in the building industry. Some examples of uses are sheets, tubes, corrugated sheets, pipes, panels, boxes and troughs.

[0046] A sheet was produced in the way shown in Figure 1 and described in the specification, but use was made only of fibrillated network films. The networks were prepared by extruding polypropylene with a melt index of 2.5 (230 °C, 2.16 kg) into film. This film was stretched 8x at 140 °C to a thickness of 25 µm. Fibrillation was then effected mechanically by means of a roller with brushes, which produced rows of parallel crevices of 12 mm in length. A row was at an angle of 430 to th3 length of the film. Three films were combined and had a thickness of 75 µm. These films were wound on reels 15 at a time. To produce tie reinforced cement sheet, use was made of 4 reels arranged in succession, resulting in a total of 180 networks being simultaneously advanced through the process. The films were then unwound and the width was changed from 6 cm to 100 cm. The number of meshes per cm 2 was 3. ThE film was then soaked in a suspension of Portland cement A, water and sand. The sand particles varied in size from 100 to 200 µm.
[0047] The water-cement factor (WCF) was 0.75 and the amount of sand was 20 % by we:.ght relative to the cement. Subsequently, the layer was pressed to a thickness of 6.6 mm and cut. The WCF of the cut sheets amounted 10 0.25. The properties of the moulded sheet, which contained 5 % by volume of polypropylene on the networks and which had 810 meshes per cm 3 of end product, were measured after 28 days' setting at a relative humidity of 95 %.
[0048] The values of these properties were:

[0049] Fig. 2 shows the curve obtained when the force is plotted versus the deflection in a four-point bending test. This curve is very smooth without any discontinuity, which suggests a very fine type of multiple cracking. Furthermore, the steepness of the curve in the pseudoplastic range is excellent. Thanks to the very fine type of multiple cracking, some physical properties, such as the impermeability to, i.a., water, are retained better. The article can also regain its former shape more rapidly and more fully after the load has been removed. In addition, a lower safety factor can be used in strength calculations. These properties are due in particular to the large number of meshes per cm .

1. Process for the manufacture of shaped articles from water-hardening materials reinforced with fibrillated organic films, characterized in that the process comprises the following steps:

a. forming continuous lengths of networks from fibrillated organic films, each containing a plurality of meshes:

c. shaping said composite layer into the desired configuration and allowing it to set. 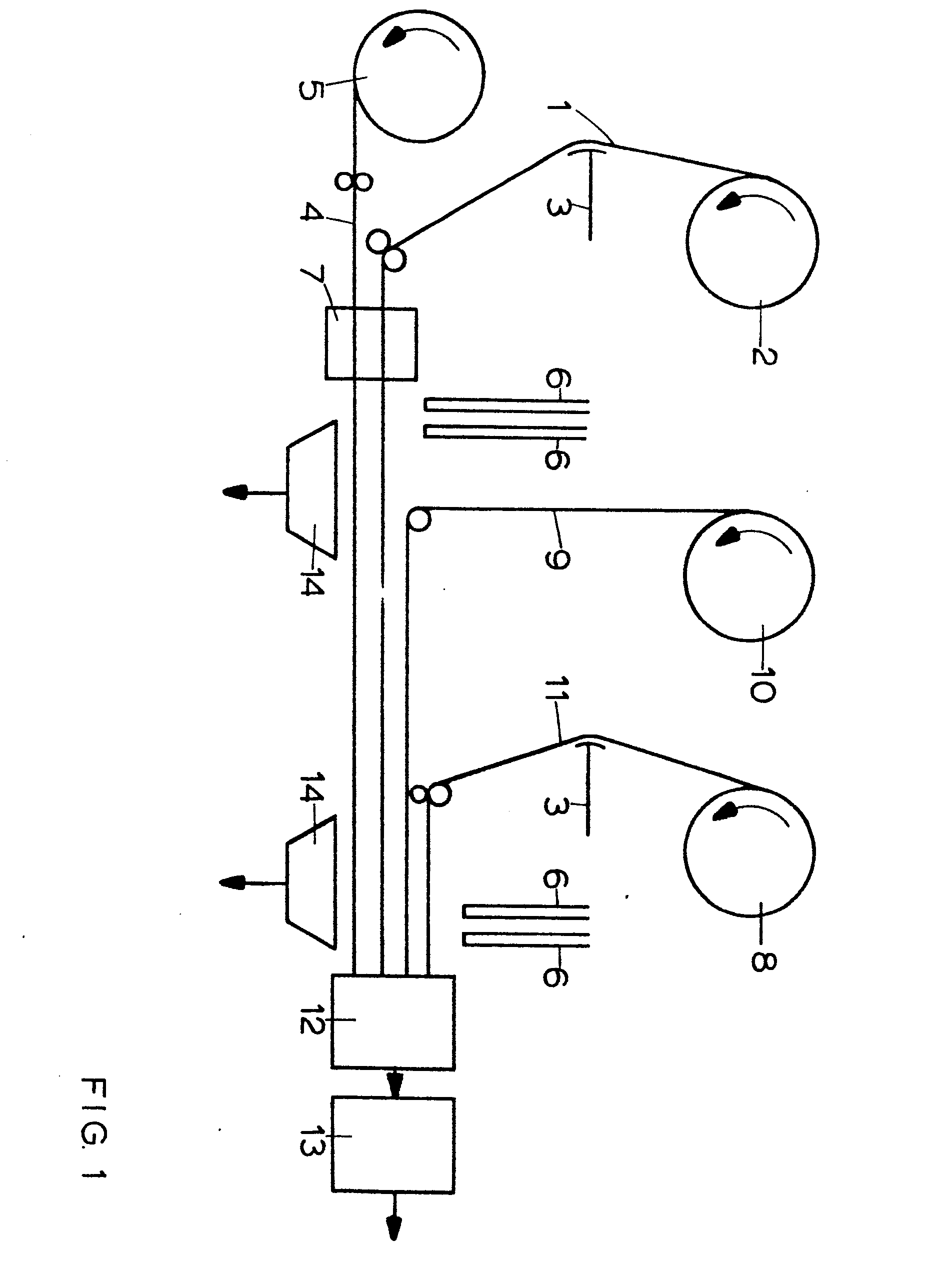 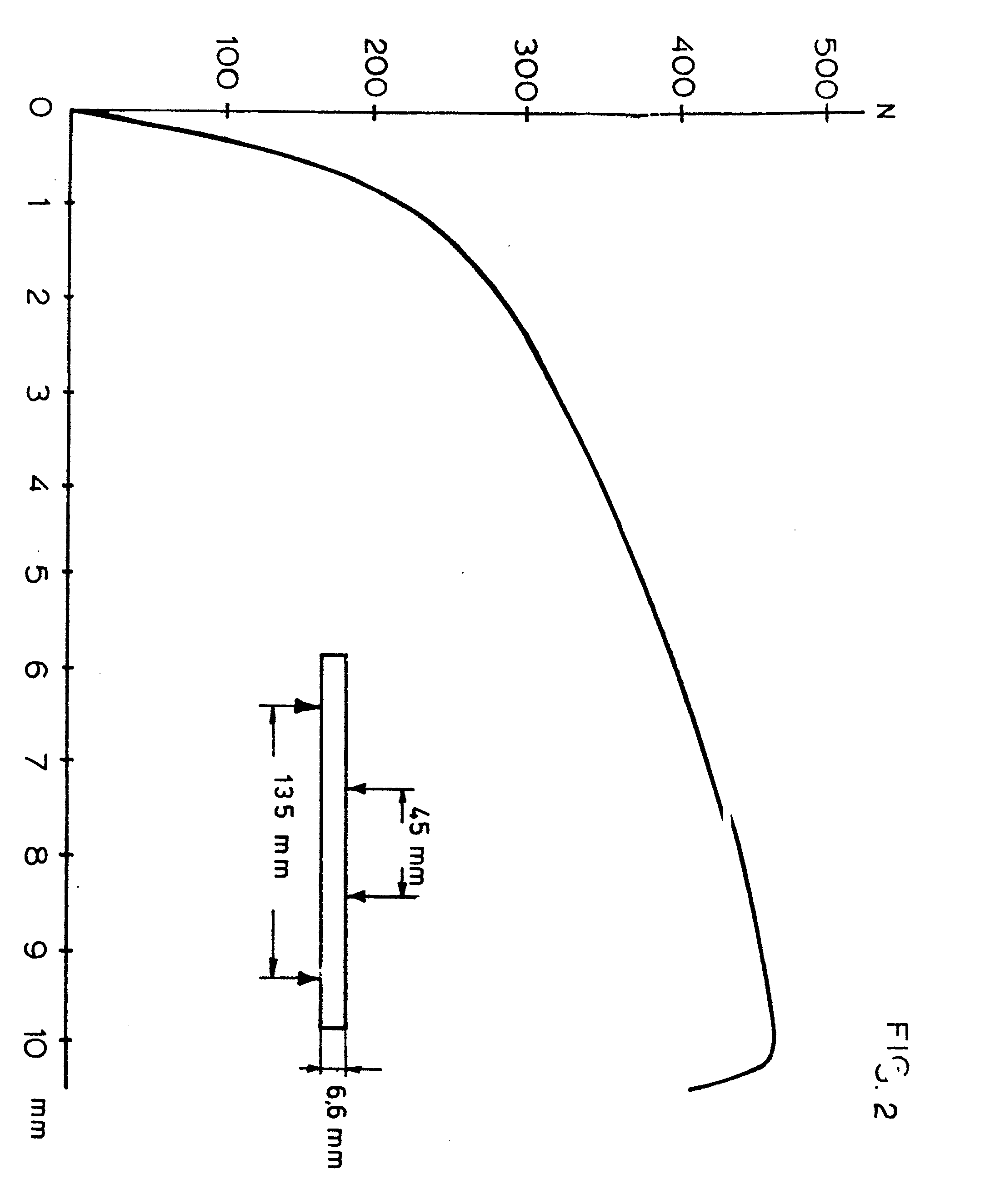 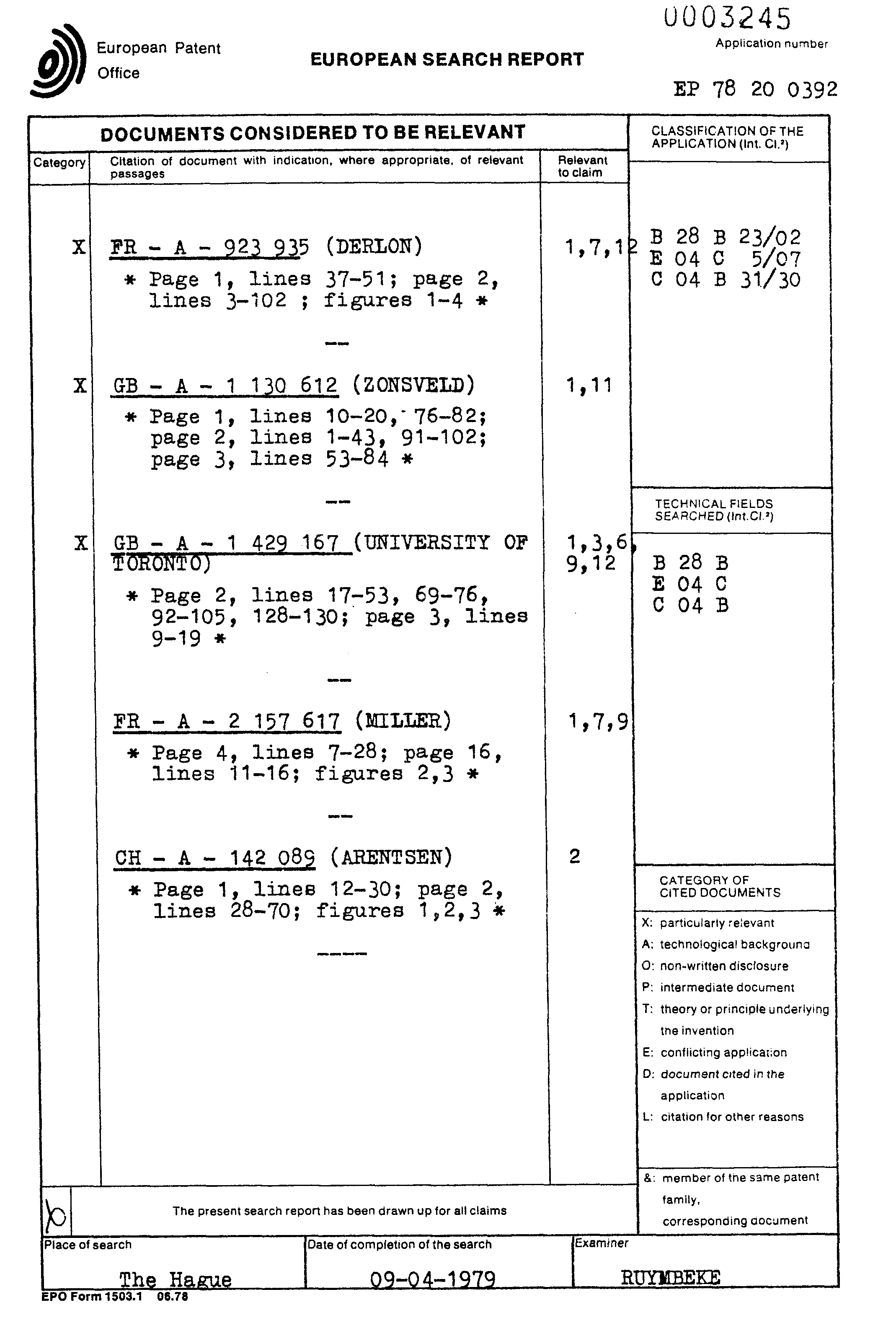