I. Title of Invention:

[0001] A PROCESS FOR REFINIMG A METAL AND A HOMOGENEOUS FINE GRAINED METAL ALLOY COMPOSITION.

Fig. 1 is a cross-sectional side view of an apparatus used to conduct a batch process embodying this invention;

Fig. 2 is a photomicrograph of a cast tin-15% lead alloy prior to refining;

Fig. 3 is a photomicrograph of the alloy of Fig. 2 after a one-step isothermal refining process;

Fig. 4 is a photomicrograph of the alloy of Fig. 2 free of secondary phase material as obtained by the process of embodying this invention;

Fig. 5 is a graph illustrating the proportion of solid recovered as a function of alloy compositions for a given set of temperature and pressure conditions;

Fig. 6 is a graph illustrating the proportion of solid recovered by the process embodying this invention and a process of the prior art for the conditions utilized to obtain the graph of Fig. 5; and

Fig. 7 is a cross-sectional side view of an apparatus used to conduct a continuous process embodying this invention.

[0032] This Example was conducted with cast tin-15% lead alloy having the microstructure shown in Figure 2. The experiment was performed in the apparatus shown in Figure 1. As set forth above, the apparatus includes a temperature controlled furnace, a stainless steel crucible for holding semisolid samples, the filter and a speed-controlled plunger to squeeze liquid through the filter.
[0033] The furnace was cylindrical and had 610 watt capacity resistance elements rated at 1210°C. A stainless steel crucible, 2.54 cm. (1 inch) in diameter and 7.62 cm. (3 inches) in length, was placed in the center of the furnace.
[0034] Temperature was virtually uniform and constant within the sample. Temperature gradients were eliminated by surrounding the sample and crucible with a heavy brass cylinder and adding a secondary heater around the quench channel. Several chromel-alumel thermocouples are positioned in the crucible wall and the brass cylinder. A thermocouple also runs down a central hole through the plunger-rod and into the plunger, itself, ending 3mm. (* inch) from the top of the sample. A test was performed only when it was ascertained that all thermocouples were reading within 0.5°C of each other and all were constant with time. The alumina filter used in this Example was ground to +0.025 mm. (+0.001 inch) less than the inside diameter of the crucible, was 6.3 mm (4 inch) thick and had pores of an average size of 200 microns. It was positioned by first heating the crucible to 300°C and then inserting the filter. This provides a tight fit with no leakage between the periphery of the filter and the crucible. The plunger is driven by a compression cage apparatus which fits into a Hounsfield tensometer. The tensometer is driven by a speed-controlled motor, and the plunger motion and force are recorded simultaneously during a test.
[0035] The load was measured by the deflection of a calibrated spring beam. The deflection of the spring beam is transmitted through a lever system to a piston which displaces mercury into a glass tube (mercury column). The movement of the mercury column is followed by manual pushing of a cursor which has an attached needle. This needle punctures the graph sheet at specified time intervals, thus recording the force. The graph sheet is attached to a drum which rotates as the driving gear mechanism of the tensometer rotates.
[0036] Samples of the dendritic Sn, 15% Pb were cast, cut to approximately 4.4 cm. (1

inches) in length, and machined in order to fit snugly in the crucuble. External to the furnace, the sample was placed into the crucible and the plunger was positioned. This assembly was put into the furnace and then heated to the desired temperature. Heat-up rates were 10 and 100 and 100°C/hr. During heating to the desired terminal temperature, the plunger was driven downward so that a constant pressure of 202 Kg/cm2 (2853 lbs./sq. inch) was maintained. At the maximum temperature, the experiment was ceased. In a control experiment the test sample was heated to 193°C and then the plunger was driven at a constant speed until a maximum pressure of 202 Kg/cm2 (2853 lbs./sq. inch) was reached. Plunger speeds were 10-3, 10-2 and 10-1 cm/sec. As the plunger moved downwards, liquid was forced'through the filter and fell into the water quench. In some tests, when the maximum load was reached, the condition of constant plunger speed was stopped, and instead pressure was held constant for 10 minutes: then the test was stopped. In the process embodying this invention, after a substantial portion of the liquid was removed at 183°C, the sample was further continuously heated to 193°C while still under pressure and all of the liquid formed in the sample was removed from the sample.
[0037] At the conclusion of each experiment, the plunger was quickly withdrawn and the crucible and remaining alloy (cake) were removed from the furnace and quenched. Samples for metallography and chemical analyses were removed from both the cake and filtrate. The cake obtained by the isothermal, control, procedure had the microstructure shown in Figure 3. The cake obtained by the two-step procedure embodying this invention was free of secondary phase material and had the microstructure shown in Figure 4.
[0038] In addition to the runs set forth above, the samples in each process were subjected to a range of final temperatures as shown in Figure 6. Surprisingly as shown in Figures 5 and 6, the amount of solid recovered over a temperature range of 183°C to 212°C final temperature was essentially constant and was about 62.5%. In contrast, the amount of solid obtained from the isothermal process ranged from about 62.5% at 1830C to a minimal amount at 212°C. 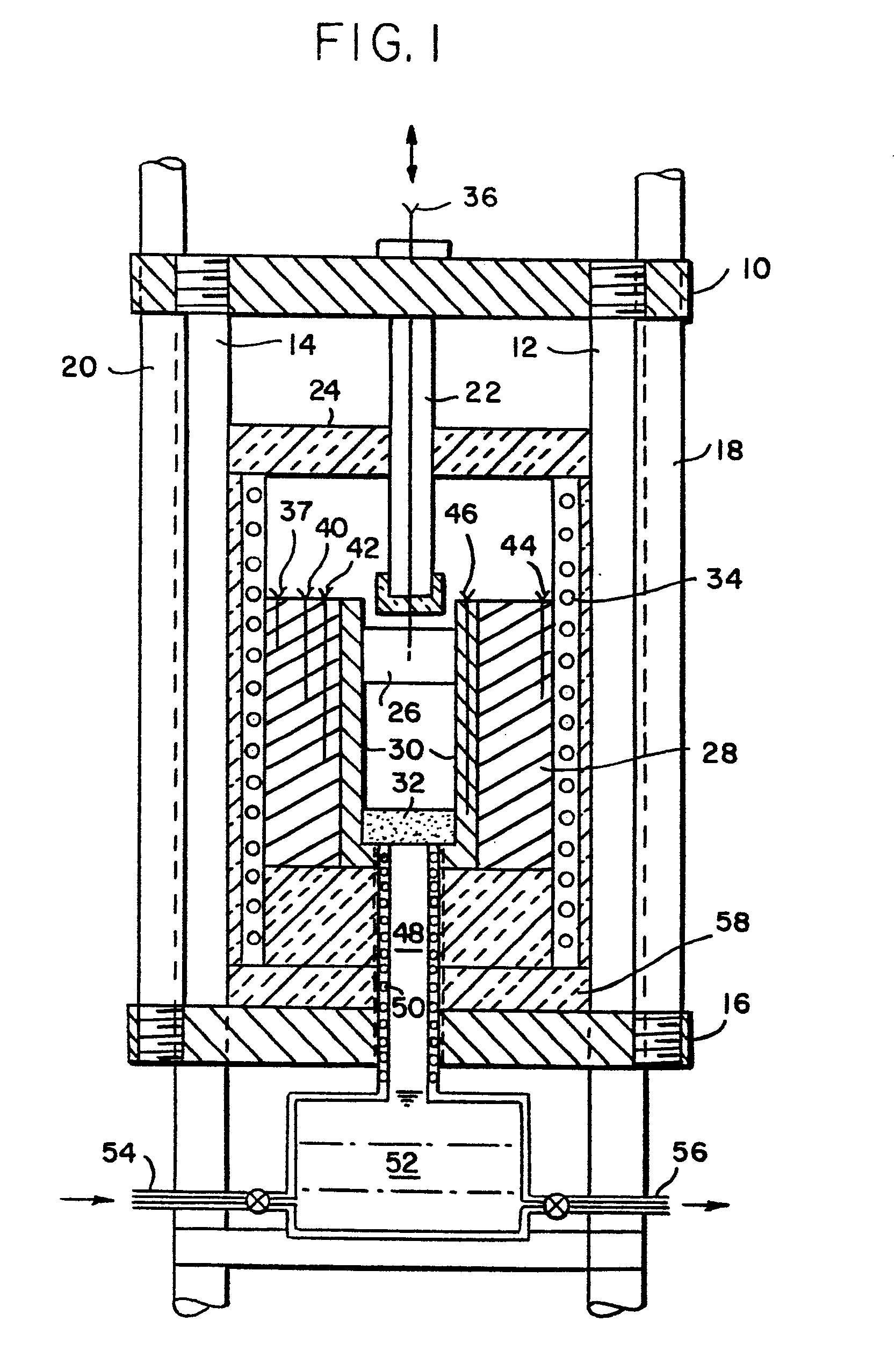 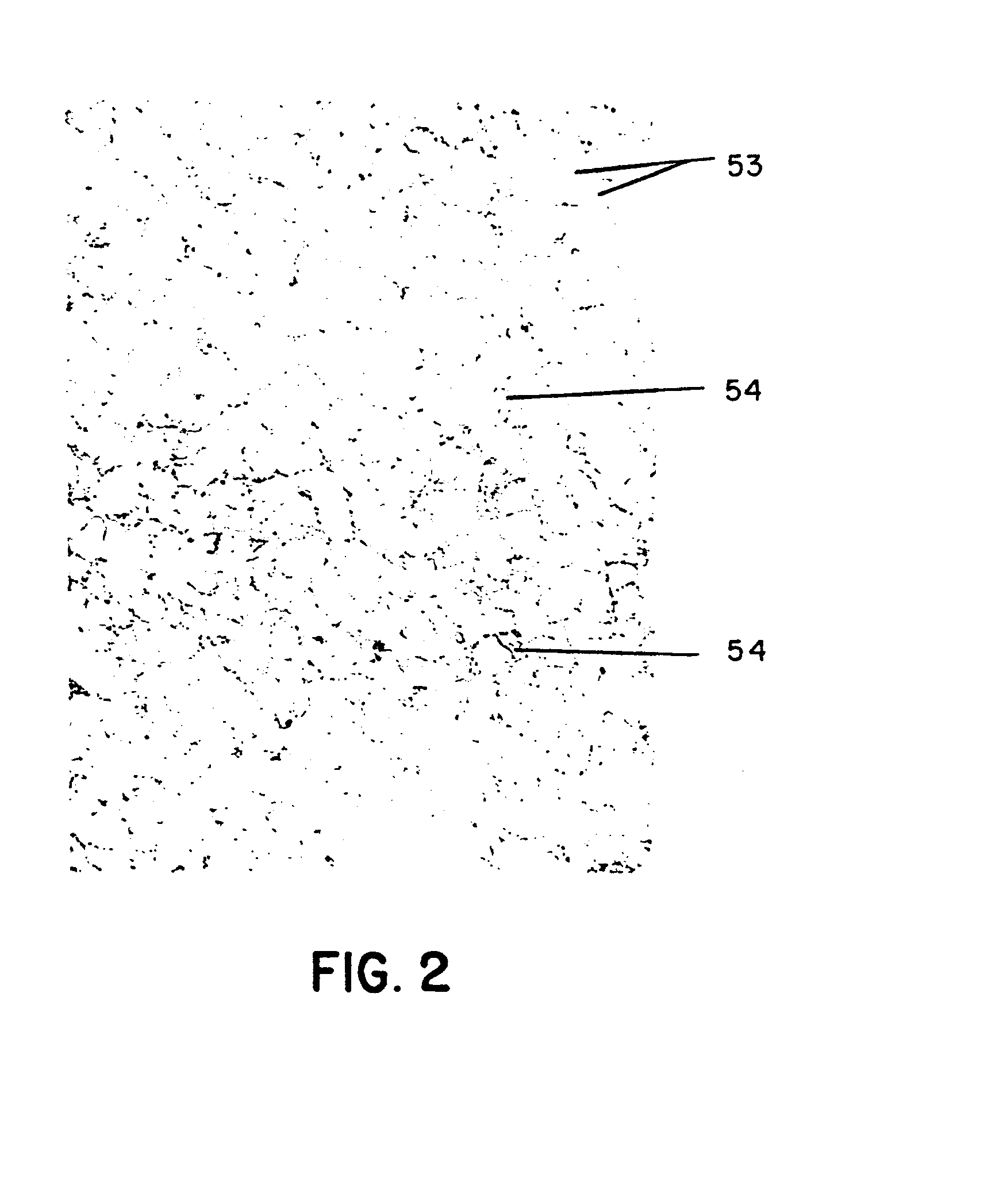 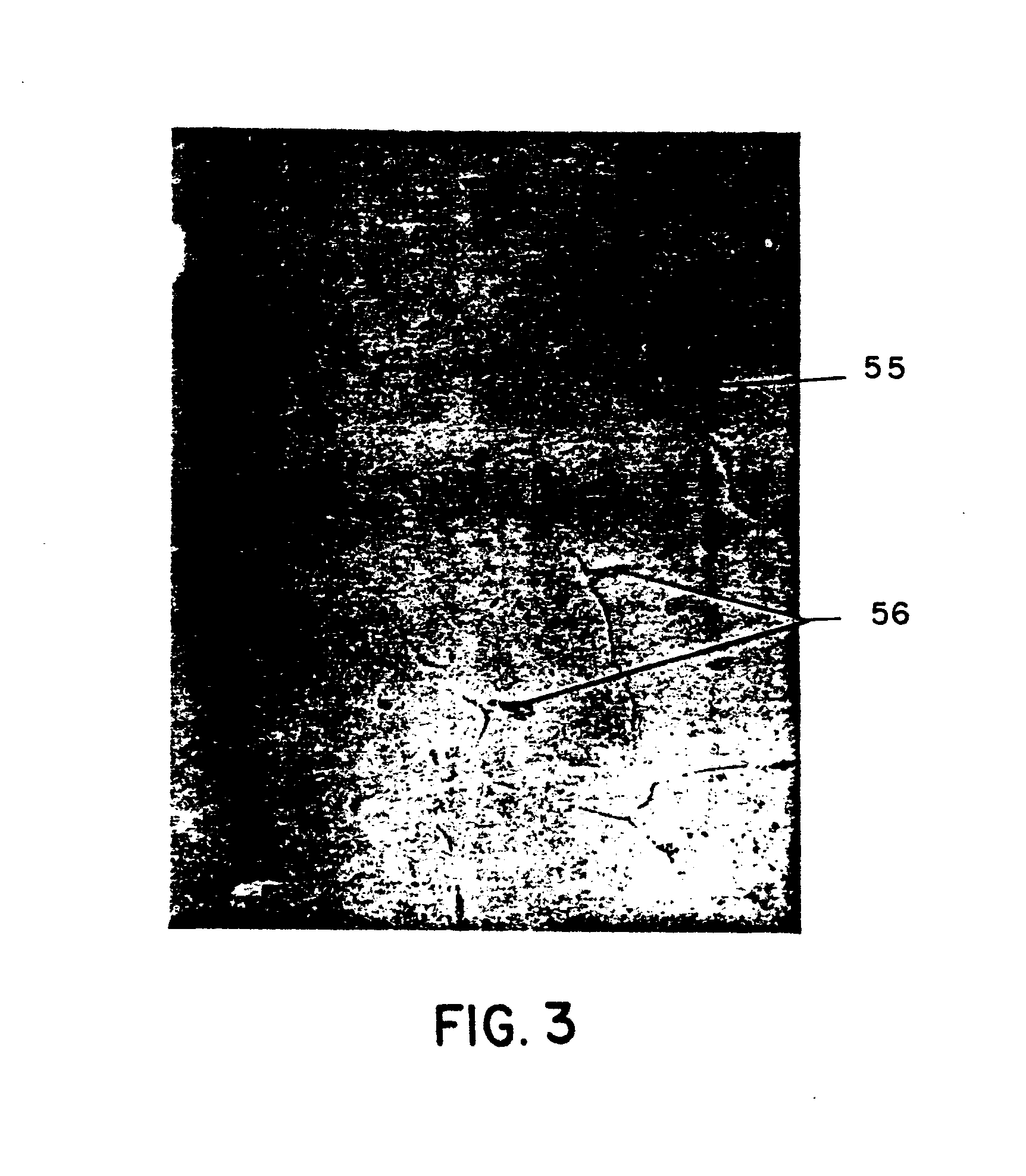 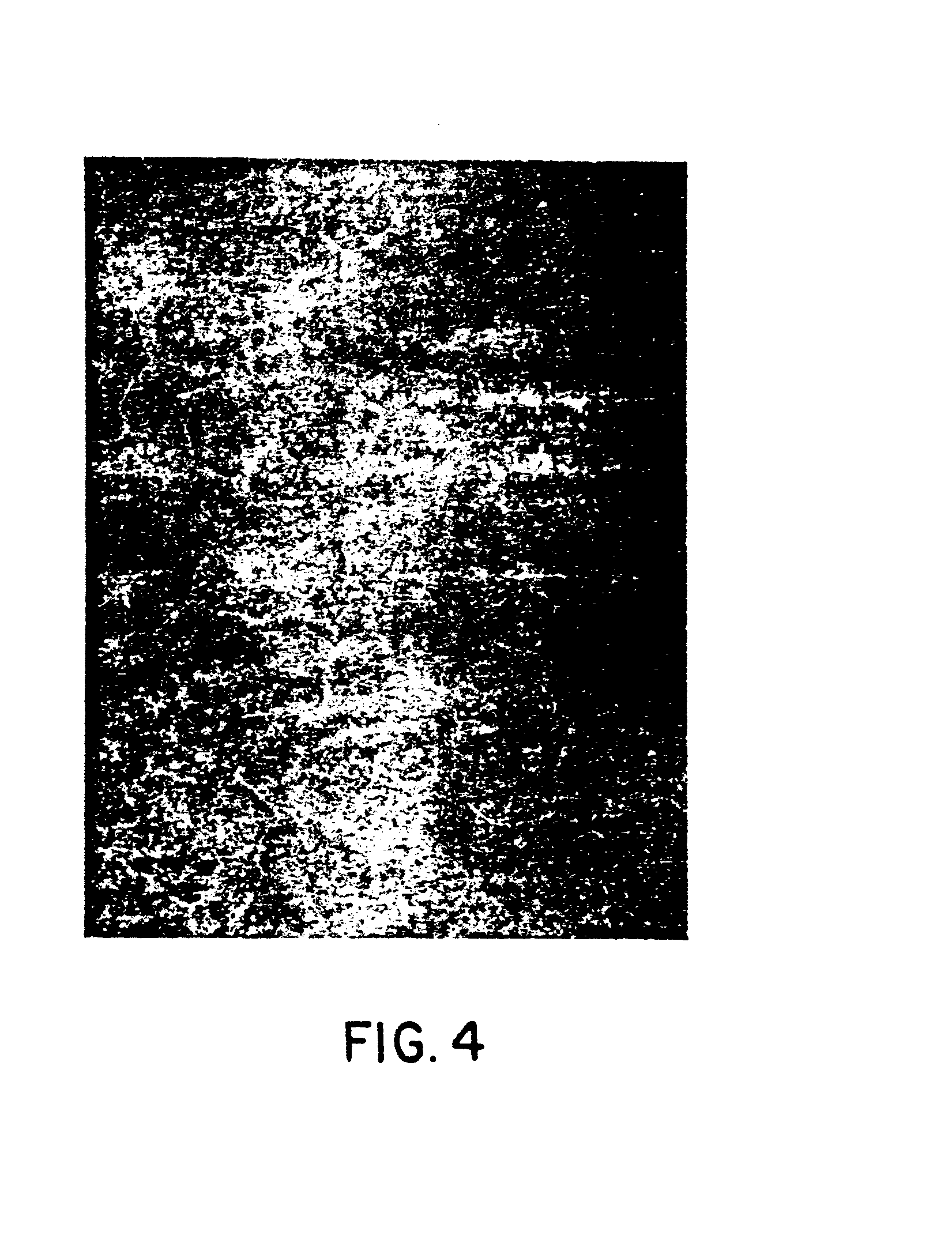 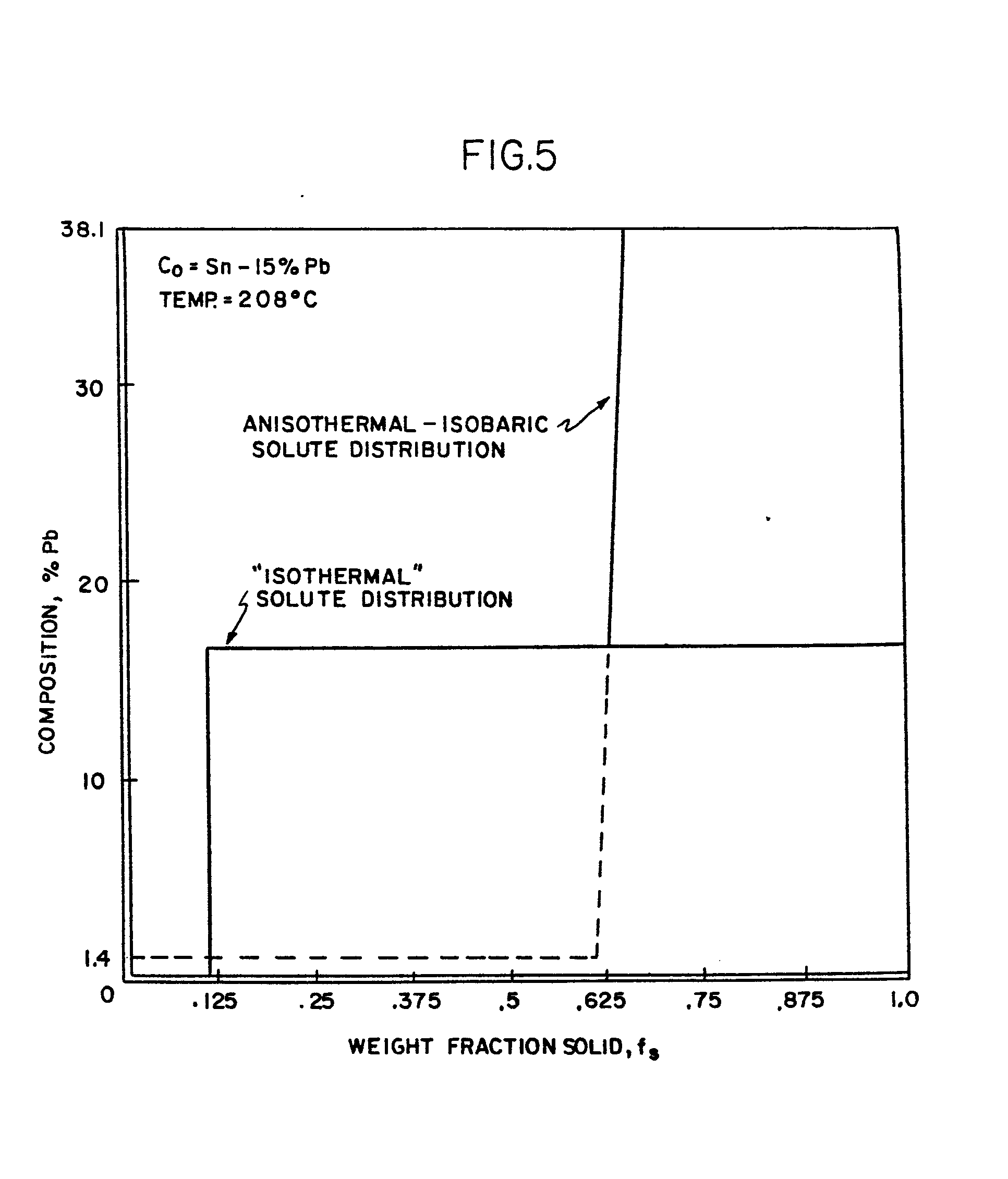 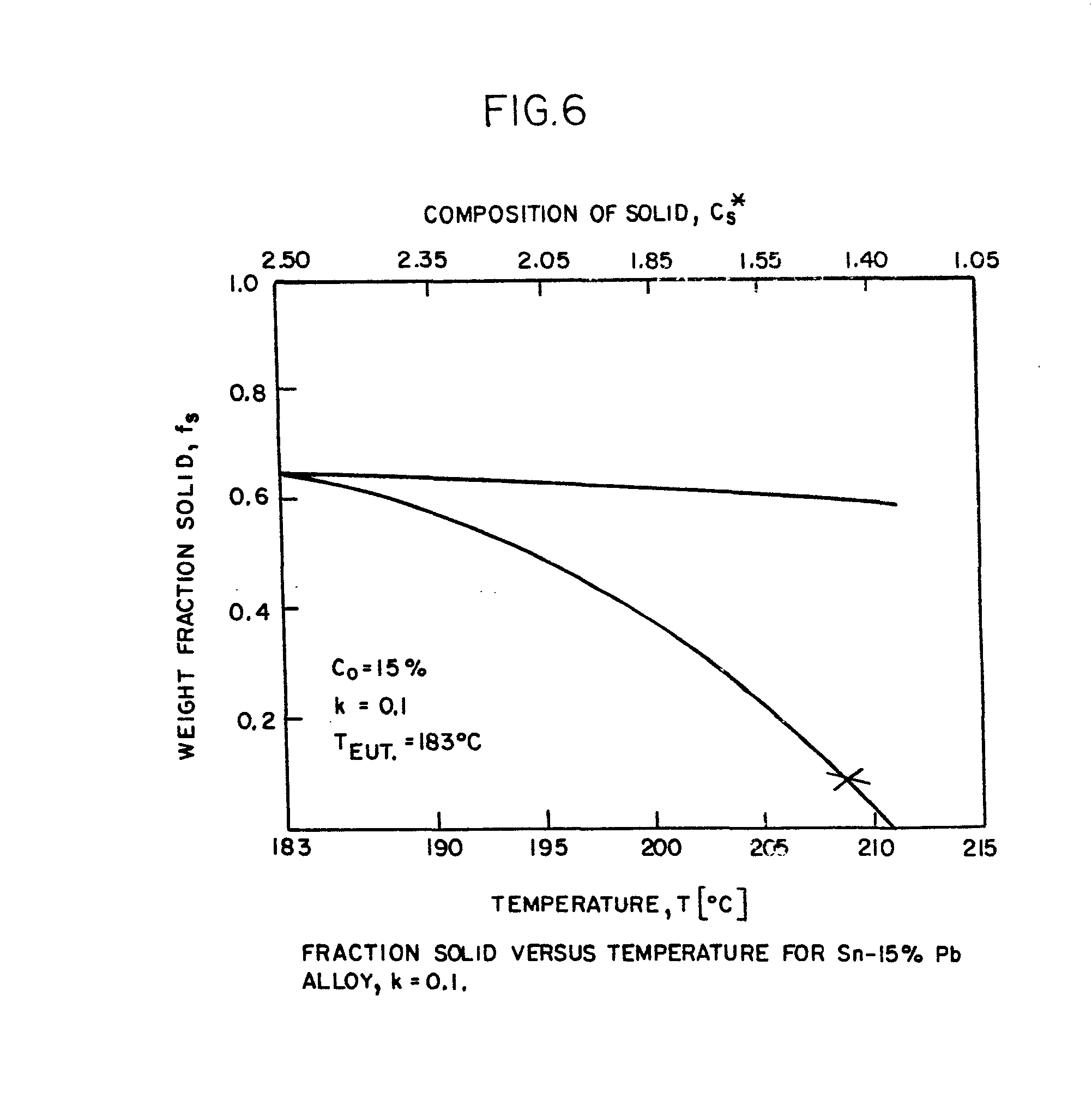 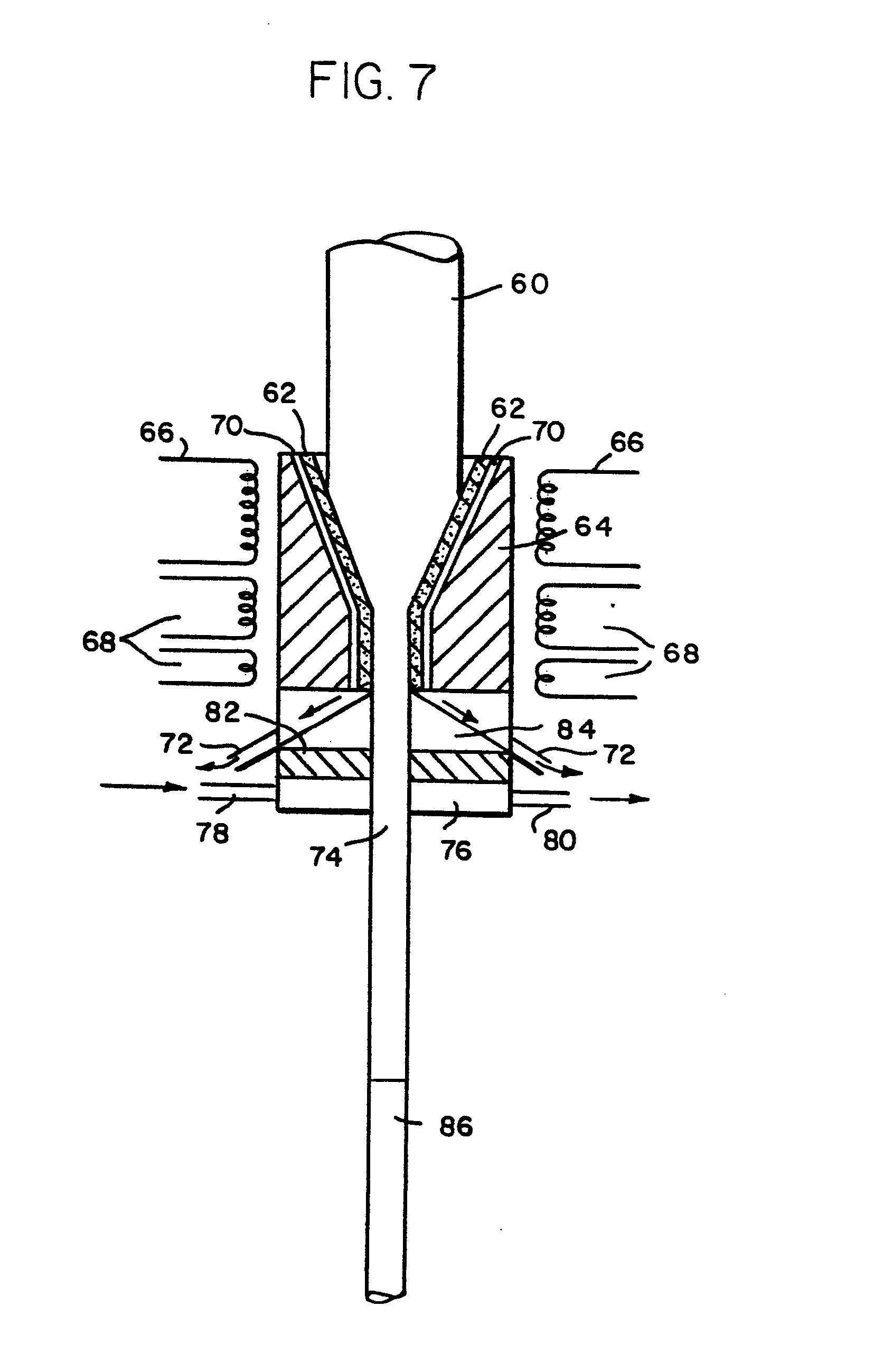 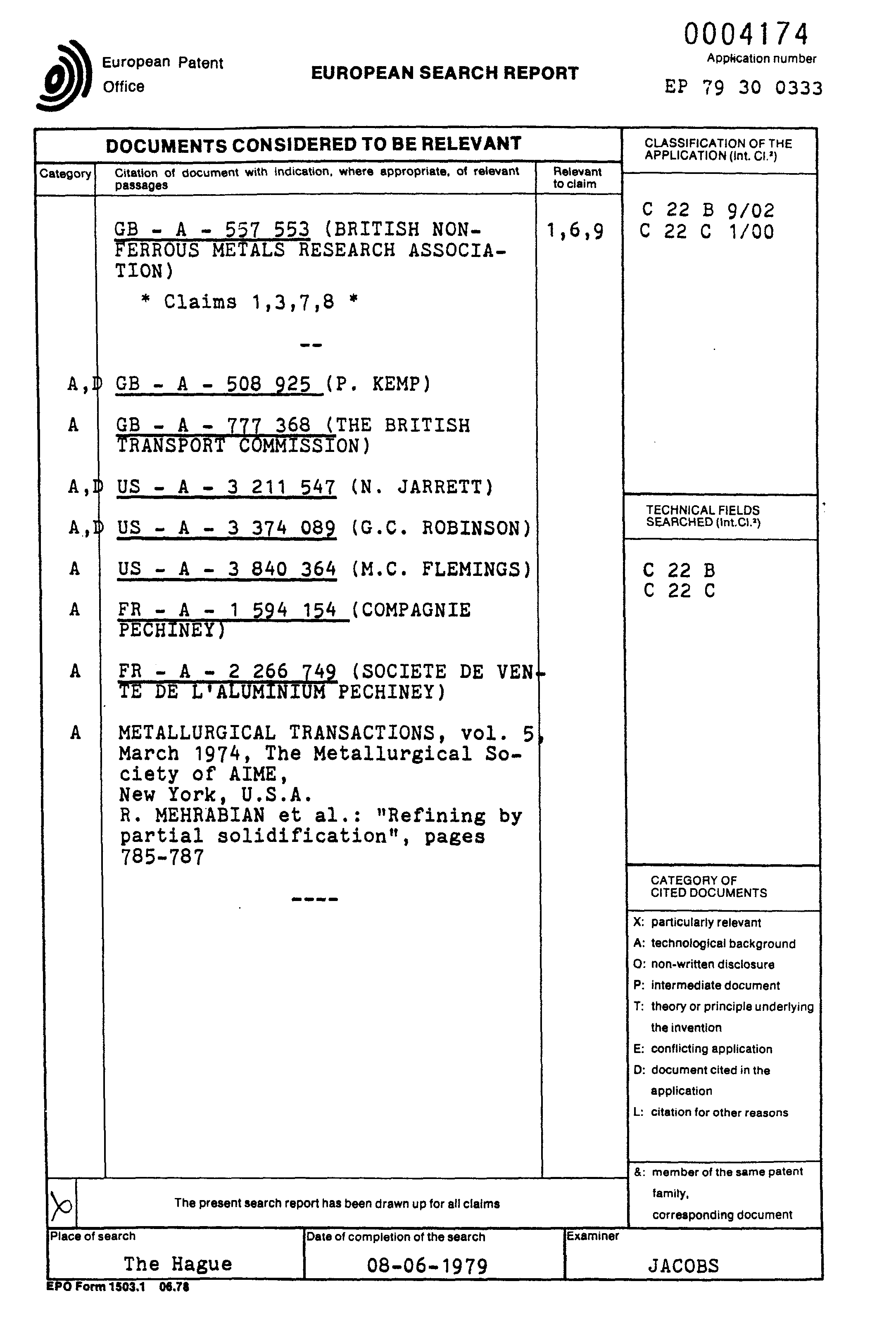