Figure 1 is a sectional view of a traction control system according to a preferred embodiment of the present invention; and

[0011] Referring to Figures 1 and 2, the traction control system 7 of the present invention has an actuator housing 10 with a longitudinal bore 12. Adjacent a top or first end 14 of the longitudinal bore 12 there is an intersecting inlet 16 which provides the means of fluid communication with a pressurized fluid supply from a master cylinder 18. Master cylinder 18 is actuated by a brake pedal 20.
[0012] The bore 12 has, axially spaced from the inlet 16, an intersecting outlet 21 which connects the actuator housing 10 with a cylinder of a wheel brake 24. The wheel brake 24 is used to restrain rotation of a wheel 22 and there is a sensor 26 which is cognizant of the rotative condition of the wheel 22. The wheel 22 will be one of a plurality of powered wheels on a common differential (not shown). The rotative condition of the wheel 22 is signaled to a traction controller 28 which in turn is connected with a reversible electric motor 30.
[0013] Slidably mounted within the bore 12 is a plunger 32. The plunger 32 has a shoulder 36 which provides general alignment and also provides a surface for mounting engagement with a light biasing coil spring 54. The coil spring 54 biases the plunger 32 in a first direction towards the inlet 16 to isolate the same from the remainder of the bore 12. On top of the shoulder 36 there is an elastomeric sealing head 40 having a top rim 42. The plunger 32 also has a neck portion 37 along with a rigid (typically metallic) sealing head 38 encircled by the elastomeric sealing head 40.
[0014] To additionally aid the mounting of the coil spring 54 there is provided a spring retainer 50. The spring retainer 50 has a series of slots or holes (not shown) to allow easy bleedability to its interior. The spring retainer 50 also has an apertured end 52 allowing insertion of a stem 33 of the plunger 32. The aperture 52 has a modified T design (not shown) allowing for a nail head 34 of the plunger 32 to be inserted therein at an angle and thereupon in an upright position retaining the nail head 34 within the spring retainer 50, thereby limiting displacement of the plunger 32 away from the spring retainer 50.
[0015] The spring retainer 50 is crimped at 51 to a head section 61 of a piston 60. The piston 60 is slidably mounted within the bore 12 and is sealed therein by an O-ring 62. Movement of the piston 60 along the linear axis 13 of the bore 12 is achieved by rotation of a drive screw 70 which is threadably engaged with a non-rotative nut 66. The nut 66 is fixably connected to the piston 60 by a clip 64. To cushion the travel of the piston 60 when the traction control system 7 is signaled in release cycle, there are a plurality of belleville washers 72. As mentioned previously, threadably inserted within the non-rotative nut 66 is a drive or ball screw 70 which is mounted within the actuator housing 10 by a set of bearings 74. The drive screw 70 is torsionally associated with the electric motor 30 by gears 76 and 78. To prevent rotation of the nut 66 there is a slot 69 shown in Figure 2 which mounts an extended portion 68 of the nut. Typically, the extended portion 68 will be the ball return portion for a ball screw bearing ball 73.
[0016] In the non-actuated side of traction control system 7, as shown in Figure 2, the nut 66 is in a retracted position causing the spring retainer 50 to positively pull back the plunger 32. The elastomeric sealing head 40 will be withdrawn from the top end 14 of the bore 12 therefore fluid may freely flow from the master cylinder 18 to the wheel brake 24 as desired by the vehicle operator.
[0017] Upon detection of the appropriate rotative conditions by the sensor 26, the traction controller 28 will signal the electric motor 30 to rotate the ball screw 70 in a manner as represented on the left hand side of Figure 2 and Figure 1 placing the nut 66 in an actuated or extended position therefore causing the piston 60 to move upward within the bore 12. Upon the initial upward movement of the piston 60 as shown in Figure 2, the tip or top rim 42 of the elastomeric sealing head 40 will mate with the top end 14 via the force exerted by the coil spring 54.
[0018] It is desirable to keep the coil spring 54 as light as possible with a wide diameter to minimize cyclic forces which may cause fatigue and also to have a low spring constant to minimize the force against the upward movement of the piston 60. The plunger 32 initially seals by the force of the coil spring 54. However, further upward movement of the plunger 32 resultant of the increase of pressure within the bore 12 exposed to the wheel brake 24 will cause the rigid (typically metallic) sealing head 38 to mate with the top end 14 of the bore 12. The above noted feature is important because it protects the elastomeric sealing head 40 from being damaged by the high pressures within the bore 12 which can reach up to 13,800 kPa (2,000 psi) during the initial pressure increase cycle of the traction control modulation. The plunger 32 will remain in its position after being pressurized during the increase of pressure during the modulation phase wherein the drive screw 70 is reversed to lower the pressure and then reapply as signalled by the traction controller 28. The vehicle operator may override the system by simply placing his foot on the brake pedal 20 to an extent to overcome the pressure within the wheel brake 24 thereby causing the plunger 32 to be lowered and therefore reconnecting the master cylinder 18 with the wheel brake 24. As mentioned previously, retraction of the piston 60 is no longer solely dependent upon the pressure within the bore 12 or the force of a return spring since it is positively pulled down by the actuator nut 66 by virtue or rotation of the drive screw 70. Therefore, the relief cycle occurs a shorter time frame.
[0019] The disclosures in United States patent application no. 864,261, from which this application claims priority, and in the abstract accompanying this application are incorporated herein by reference.

1. A traction control system for an automotive vehicle which includes a master cylinder (18) for supplying pressurized fluid to a wheel brake (24), and a traction controller (28) cognizant of a rotative condition of a wheel (22) associated with the wheel brake, the traction control system comprising a housing (10) with a longitudinal bore (12) having an axis (13), inlet means (16) for fluid communication with the master cylinder and intersecting the bore at a first end (14) of the bore, and outlet means (21) for fluid communication with the wheel brake and intersecting the bore at a position spaced from the inlet means; a plunger (32) slidably mounted within the bore with a sealing means (38,40) for fluidly isolating the bore from the inlet means by axial movement of the plunger in a first direction towards the first end; spring means (54) biasing the plunger in the first direction; a piston (60) sealably slidably mounted within the bore for creating a variable control volume in the bore and in fluid communication with the wheel brake, the piston being separated from the plunger by the spring means; mounting means (50) for mounting the spring means between the plunger and the piston; relative translational displacement limiting means (34) to limit the relative displacement of the plunger away from the piston in the first direction; a nut (66) fixably connected with the piston on a side of the piston opposite the inlet means; means (68) preventing rotation of the nut; a drive screw (70) threadably engaged with a threaded bore of the nut and mounted for rotation for axially translating the nut and the piston; and reversible motor means (30) responsive to signals given by the traction controller and torsionally associated with the drive screw whereby a movement of the piston in the first direction isolates the bore from the master cylinder and further movement of the piston allows the traction control system to modulate the pressure within the wheel brake.

3. A traction control system as claimed in claim 1 or claim 2, wherein the spring means is a coil spring (54). 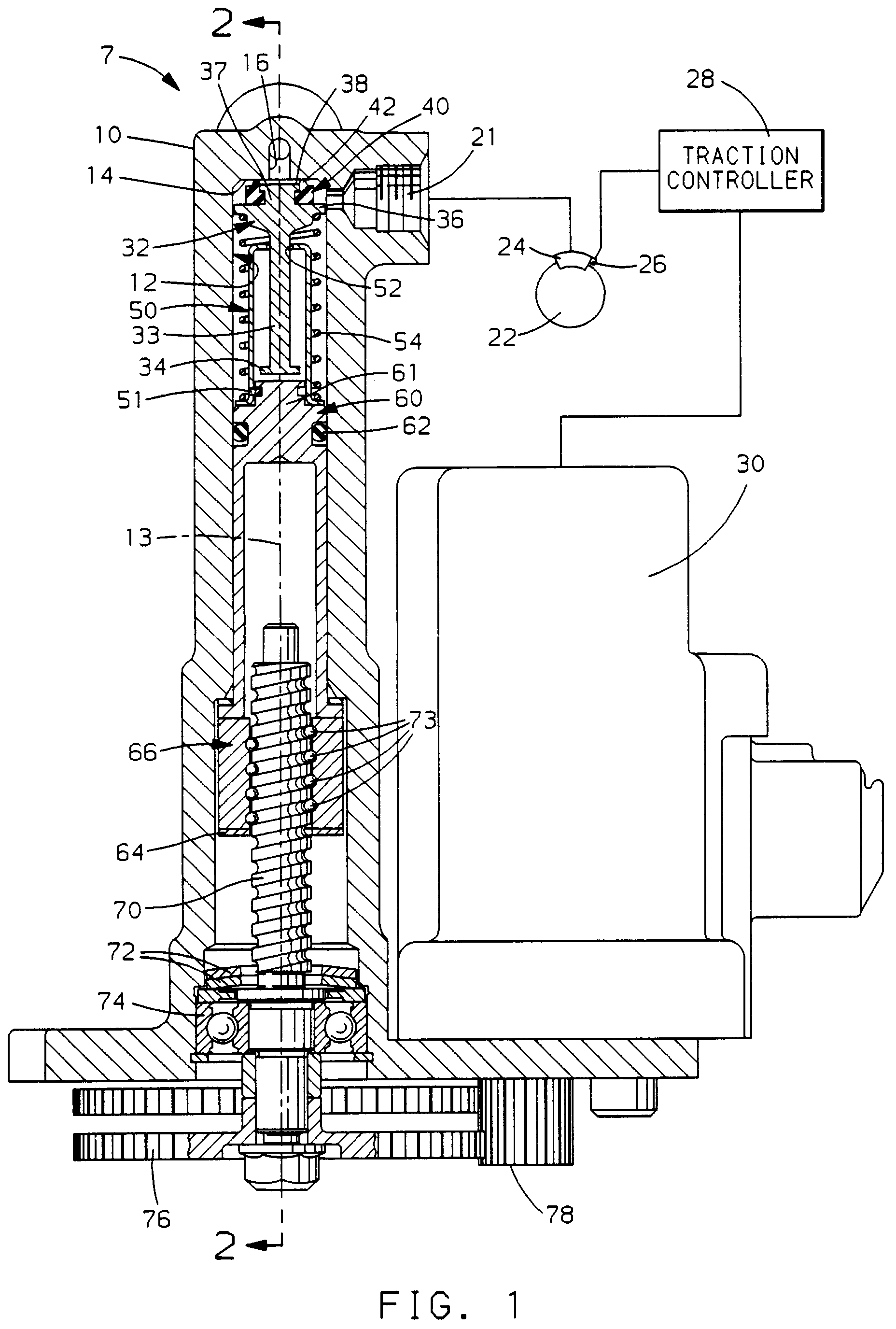 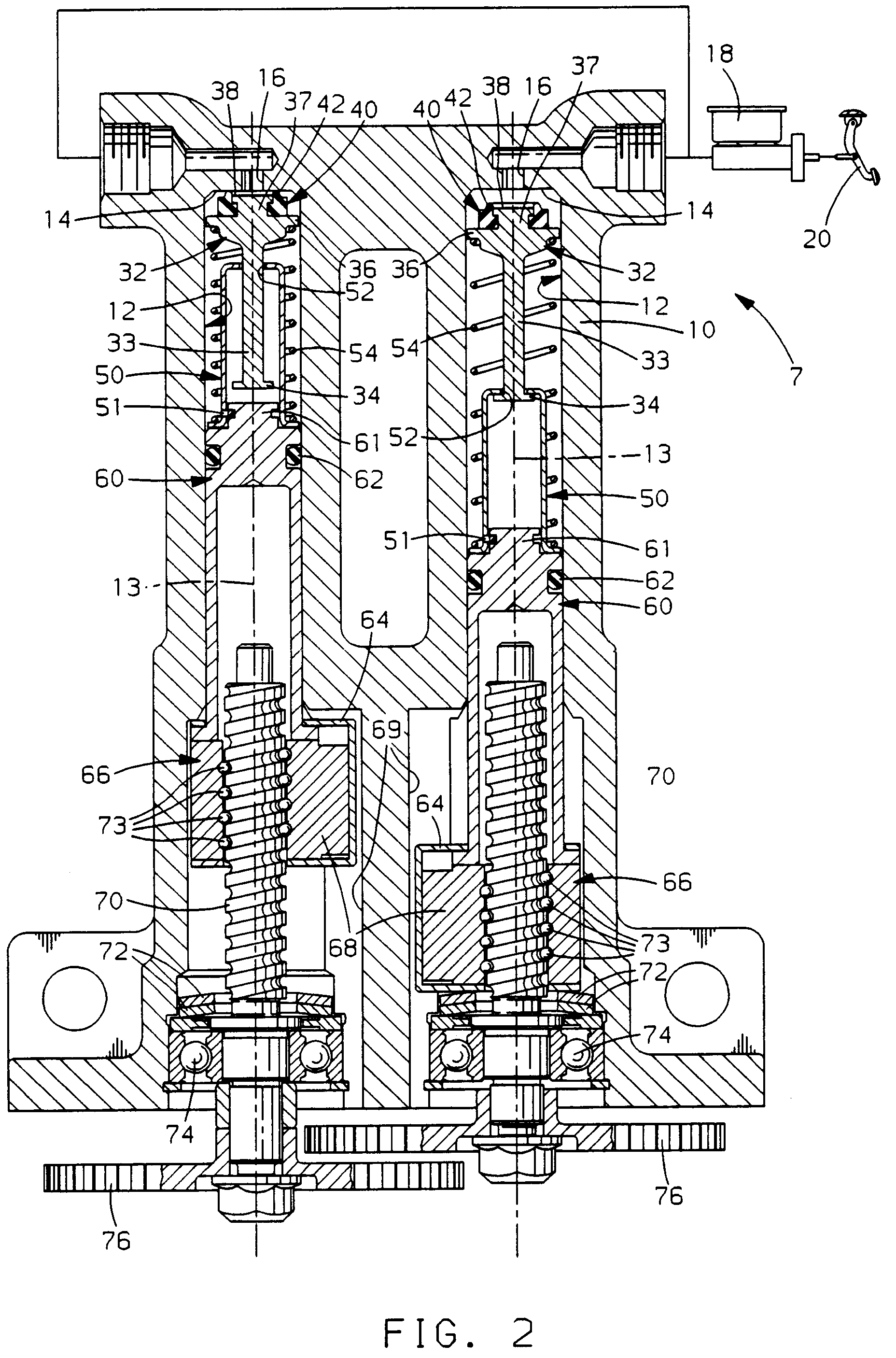 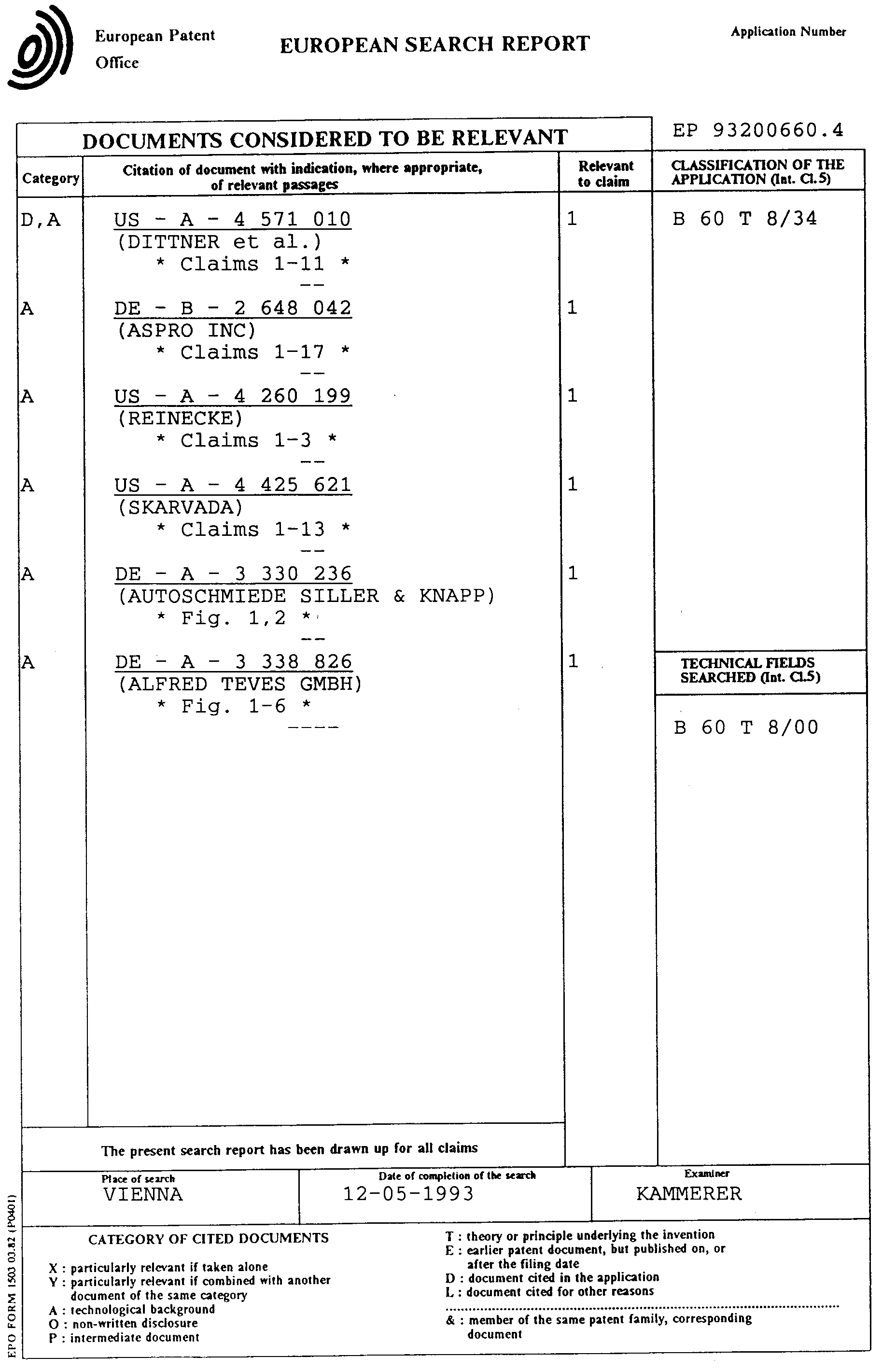