DESCRIPTION OF THE BLOCKS

SCRAMBLE RAM (SCRAM): this is the transcoder memory which contains a table enabling the reallocation of the data matrix addresses; the redundant rows are employed when it is necessary to substitute any faulty rows;

SCRAM DEC: this block enables decoding the addresses of the reallocation table;

FUSE LOGIC: this logic block enables a step to be performed to locate non-useable rows and to substitute redundant rows therefor,

LOGICAL ROW ADDRESS BUFFER: this is an input buffer memory that stores the row address coming from the external bus;

FAIL MAP: this is the core of the chip, namely a non-volatile memory area, programmed during the testing stage and available to a possible processor for managing said SCRAM memory by means of a suitable bus,

WORD COUNTER: this block performs a counting operation of the addressed words by means of an external clock signal and, in addition, it generates the word addresses;

DATA IN/DATA OUT: these blocks represent data input (or write) and output (or read) buffers, that directly co-operate with the MUX block;

MUX: this block represents a multiplexer circuit that is controlled by a SCRAM-EN signal for switching over the data transfer to the effective data memory or to the transcoder memory SCRAM;

ARBITER: this block controls the refresh operations by acting upon the REFRESH block. Furthermore, it solves the conflict

REFRESH COUNTER (REFRESH CNT): this block generates the addresses needed for refreshing the two volatile memories included in the system, the data matrix memory and the transcoder memory;

[0021] Before analysing the operation, it should be noted that the memory according to this invention also offers an active performance since it also includes the possibility for certain local processes to be performed, even if it is only restricted to correcting the errors. This means that, when the error correction process is not positively concluded, then the memory itself supplies an interrupt signal (INT) to the central processor.
[0022] Furthermore, it should be noted that, as a consequence of the fact that SCRAMBLE RAM is used, it is no more necessary to subdivide the data memory into sectors, as it was in the prior art; in fact, upon decoding the addresses of the SCRAMBLE RAM, any one of the provided redundant rows can replace any one of the faulty rows.

[0023] The blocks shown in Figure 1 provide for a correct operation of the memory. Some operation modes will now be analysed.
[0024] ACCESS: first of all, it is necessary that the chip be enabled: this is achieved by setting signal CE = active, subsequently the addresses should be transferred, by loading them into suitable buffers DATA IN/DATA OUT. Signal W (write/read) determines the direction of the data.
[0025] WRITE: upon applying the logic address, the transcoder memory translates it into a material address and in the mean time during the real address generation step, it provides for skipping any faulty rows.
[0026] The error correction (ECC) block provides for adding the redundancy bytes loaded into the input buffer to the data and such bytes are conveyed by means of a multiplexer circuit MUX to the cell matrix wherein they are all stored in a single row. Contemporaneously, the clock signal enables the word counter to count the number of the obtained addresses and consequently the transferred bytes by means of an external operation, for each input byte.
[0027] READ: upon enabling the chip by means of CE active signal and upon switching it to a read condition by disabling signal W, the sector address is provided and the material address is generated to enable the desired row to be accessed to by means of the transcoder table. The data will reach the above said buffer circuits and will be processed by the error correction block ECC, which locates and corrects any storage errors by means of the redundant bits. Should this operation be unsuccessfully performed, it will notify the non-correctable error status to the central processor by means of said INT signal.
[0028] The construction according to this invention will also permit a direct access to the SCRAMBLE memory, as it is necessary during the diagnostic stage of the solid state disc: this operation, takes places by setting signal SCRAMBLE_EN active.
[0029] As previously mentioned, the memory according to this invention is a memory of quasi-static type; in fact, the concerned chip automatically handles both the refresh operation of the data memory and the refresh operation of the SCRAMBLE memory. These performances are assured by the following blocks: REFRESH, by which the refresh function is effectively carried out, ARBITER, by which any conflicts between access and refresh operations are solved, and OSC, by which the synchronisation between the operations of the above two blocks is assured.

DESCRIPTION OF SIGNALS AND BUSES

A0-A11: 12 bit buses used to supply the chip with the required addresses,

CLK: this signal is enabled each time a byte arrives and, in turn, it enables the word counter to count the addressed bytes,

INT: this is an interrupt signal by which the ECC block indicates the existence of a non-correctable error,

SCRAM_EN: it enables the data bus to be connected either to the cell matrix or to the map memory.

[0031] Many advantages are connected with using the memory as shown in Figure 1. First of all, it enables the control operations as well as the control module to be simplified. In particular the interface circuit between the microprocessor and the memories of the solid state disc SSD is simplified. The control module will then perform only the function to bypass the addresses by making them compatible with the memory as carried out by the control module itself. This reduces both the physical size of the control module itself and the complexity of the algorithm of the logic connection between data and control byte.
[0032] The memory according to this invention, (ASM: Application Specific Memory) guarantees a noticeable advantage during the manufacturing stage, in particular during the test stage of the memory chips. This is in comparison to DRAM memories. A single pass test is sufficient. Since the control bytes are all sequentially stored in a single row, the addressing operation can only be effected in the so-called "page mode" and an immediate logic connection exists between the memory area allotted to the data and the memory area allotted to the check bytes. In view of this, the two different kinds of analysis of the DRAM memory faults as presently needed would be simplified and unified into a single test operation, with apparent improvements in terms of production rates.
[0033] Furthermore, the restriction to a single faulty byte per block no more exists, in contradiction to conventional memories. In fact, since all 576 bytes are consecutive, it will be sufficient to check that the maximum number of faulty bytes within the string be less than or equal to the maximum allowable fault rate. In conventional DRAM memories, since it is not possible to logically connect the data and ECC memory areas, it is necessary to adopt more restrictive rules, so as to avoid that the sum of the defects of the two concerned areas be greater than the correction capability of the selected code.
[0034] Lastly, the production rate of ASM memories is less expensive than that of DRAM memories. The number of the manufacturing stages is decreased. By analysing the data concerning the effects upon the chip ageing errors, it can be noted that, in effect, all kinds of errors occurring therein do not raise any problem to the solid state disc (SSD) manufactured with built-in ("on-chip") ECC. This results in the fact that the test procedure of this new memory will no longer need the 'burn-in' stage and the repetition of the whole test procedure at room temperature.
[0035] The preferred embodiment of this invention has been described and a number of variations have been suggested hereinbefore, but it should expressly be understood that those skilled in the art can make other variations, changes and modifications in the details and in the construction particulars, without departing from the scope of this invention.

- a first memory block structured as a cell matrix in which data bytes (DATA ARRAY) are stored and in which an error correction code (ECC) is stored;

- a second memory block (SCRAM) which contains a decoder table enabling the reallocation of the data matrix addresses, wherein redundant rows are included;

- a block (SCRAM DEC) for decoding the addresses of the decoder table;

- a logic block (FUSE LOGIC) to enable a step to be executed to locate any non-useable row and to substitute said redundant rows therefor;

- a non-volatile memory block (FAIL MAP) , programmed during the test stage and available to a possible external processor for handing the content of the second memory (SCRAM);

- a word counter block (WORD COUNTER) that is driven from the external clock signal and counts the number of the addresses words and generates the word addresses.

2. The memory according to claim 1, further comprising:

- an input buffer block for storing the row addresses coming from the external bus;

- two input and output buffer blocks (DATA IN; DATA OUT) for the data to be written in or read out, and

- a multiplexer block (MUX) by which the data stream is driven to the first memory (DATA ARRAY) or to the second memory (SCRAM).

3. The memory according to claim 1 or claim 2, further including

- a refresh counter block (REFRESH CNT) to generate the addresses of both the first memory (DATA ARRAY) and the second memory (SCRAM);

- a local oscillator block (OSC) that provides for timing the arbiter block.

4. The memory according to any preceding claim, wherein the following signals operate the memory:

- CLK: a clocking signal which is enabled each time a byte arrives and in turn enables the word counter to count the addressed bytes,

- INT: an interrupt signal by which the error correction code (ECC) block indicates the existence of a non-correctable error,

- FAIL_MAP: a signal permitting access to the memory area,

- W: a low active signal that enables the data flow direction to be controlled, read/write,

- SCRAM_EN: a signal which enables the data bus to be connected either to the first or to the second memory.

5. The memory of any preceding claim, wherein the following buses are connected to the memory:

- a further bus being provided for an external processor to access the FAIL MAP block.

6. The memory of any preceding claims wherein the first memory is a data array.

7. The memory of any preceding claim, wherein the second memory is a transcoder memory.

8. The memory of any preceding claim in the form of a Solid State Disk Memory. 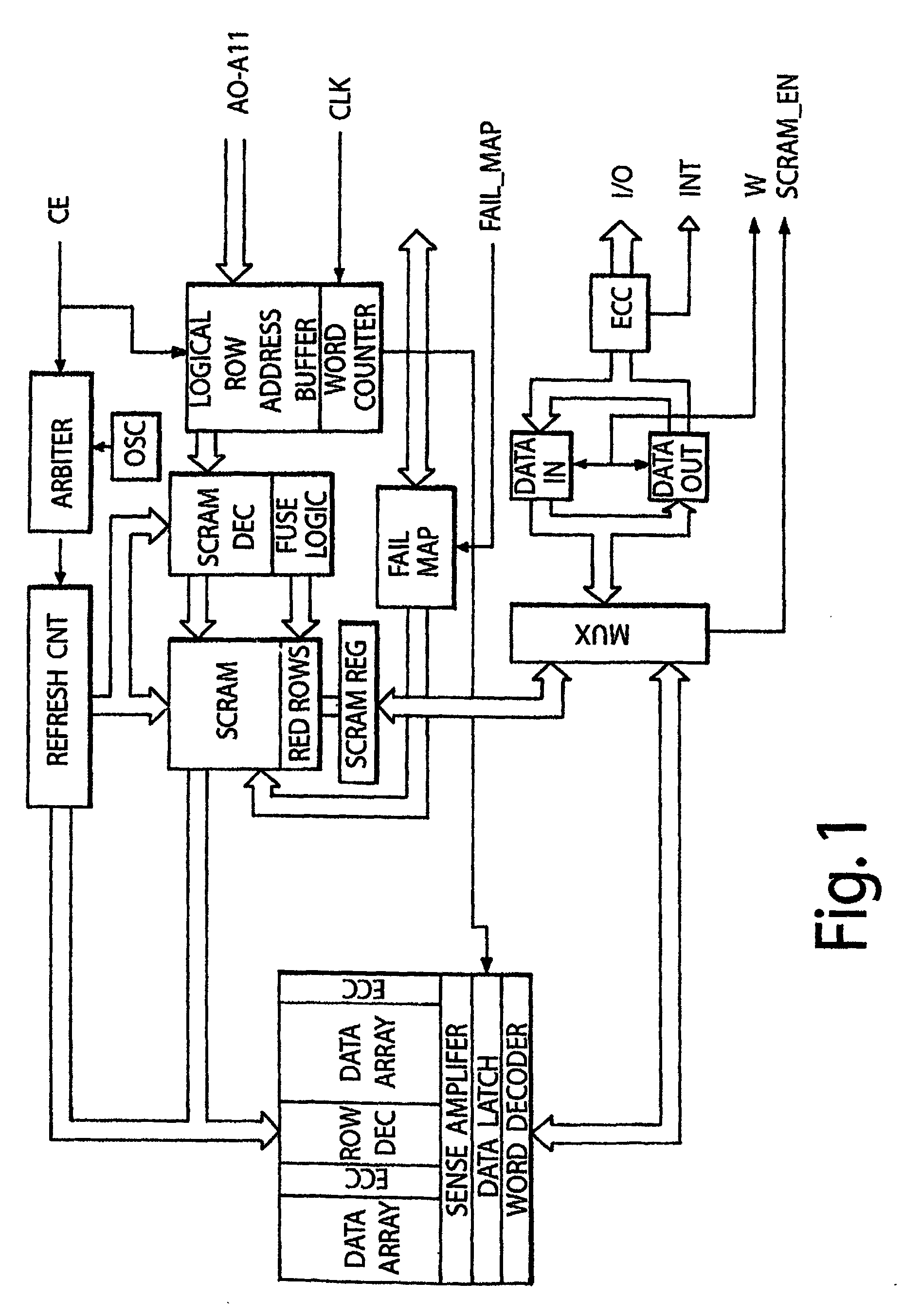