[0001] The present invention relates to a deck of ships comprising an apparatus for gripping and raising, orienting and transporting helicopters of the wheeled type, in particular on board ships, platforms and the like.
[0002] It is known that the widespread use of helicopters on board ships poses the need for effecting transportation of a helicopter from a landing area, located on the deck itself, into a hangar situated on the deck of the same ship.
[0003] This operation, however, is particularly complicated owing to numerous factors which result in a high degree of unpredictability as regards both the landing position on the deck and the relative position of the helicopter, the deck itself and the hangar entrance; in addition, the manoeuvre must be able to be carried out in a total safe manner both for the helicopter and for the ship's crew, even under extremely hazardous conditions involving, for example, high winds and/or rough seas which cause pitching and rolling of the ship, resulting in an unstable equilibrium of the helicopter.
[0004] Certain technical solutions are also known, whereby use is made of a carriage which is movable on deck in a direction substantially parallel to the longitudinal axis of the ship and to which the helicopter must be hitched up after landing so that the carriage itself, by means of suitable devices, is able to transport the helicopter to the hangar.
[0005] Such devices, however, have certain drawbacks, including the fact that it is particularly difficult, especially during adverse weather conditions, to couple the helicopter to the carriage if the helicopter, after landing, is not properly positioned and has its longitudinal axis rotated with respect to the longitudinal axis of the ship.
[0006] The publication EP 0,518,405 also discloses in the name of the same Applicant an apparatus for gripping, handling and transporting helicopters in particular on board platform ships and the like, which comprises a pair of gripping elements arranged parallel to the longitudinal axis of the ship and designed to translate transversely with respect to said axis, in engagement with corresponding transverse guiding means fixed to the deck, and to assume an inclined, but mutually parallel position with respect to said guiding means, under the action of mutually independent operating means. Said apparatus, which enables the helicopter to be brought into the correct position for subsequent coupling to the carriage for longitudinal transportation towards the hangar, is particularly versatile and suitable for use with both helicopters of the runner type and helicopters of the wheeled type, but has complex mechanisms, operating devices and associated control devices which also require additional modifications to be made to the structure of the ship for example in order to fit the transverse guides.
[0007] The technical problem which is posed, therefore, is that of providing a simple and reliable apparatus suitable for hitching and raising a helicopter of the wheeled type in order to transport it, from any position inside a well-defined landing area on the deck of a ship, into a position where it is correctly oriented and aligned with respect to longitudinal guides provided on the deck of the ship itself for subsequent transportation towards the hangar, whereby such an operation must be able to be carried out easily and repeated whatever the relative position of the helicopter, inside the landing area and with respect to the longitudinal axis of the ship. This operation must also be able to be carried out automatically, and/or manually, but without operating personnel present on the deck in the vicinity of the landing zone, and allow the apparatus itself to be kept under cover inside the hangar until the moment when it is actually used for recovery of the helicopter.
[0008] These results are obtained by the present invention, which provides a deck of ships comprising an apparatus for gripping, raising, orienting and transporting helicopters according to the characteristics of claim 1.
[0009] Further details can be obtained from the following description, with reference to the accompanying drawings, in which:

Figure 1 shows a plan view of the ship deck according to the invention;

Figure 2 shows a partial schematic cross-section along the plane indicated by II-II in Figure 1;

Figure 3 shows a partially sectioned side view of the travel unit shown in Figure 2;

Figure 4 shows a schematic plan view of the apparatus during translation towards the helicopter;

Figure 5 shows a plan view of the apparatus closed in position between the front wheel and main wheels of the helicopter;

Figure 6 shows the apparatus during alignment with the axis of the wheels of the helicopter;

Figures 7a, 7b show a plan view and front view, respectively, of a detail of the open gripping device during coupling of the helicopter;

Figure 7c shows a schematic cross-section along the plane indicated by VIIc-VIIc in Fig. 7b;

Figures 8a, 8b show a plan view and side view, respectively, of a detail of the closed gripping device during coupling with the helicopter;

Figure 8c shows a schematic cross-section along the plane indicated by VIIIc-VIIIc in Figure 8b;

Figures 9, 10, 11a and 11b show a variation of an example of embodiment of the apparatus, viewed from above during the various phases of start-up, movement towards and orientation with respect to the helicopter.

1. Deck of ships identified by an own longitudinal axis (X-X) into which rails (4) are joined along a direction parallel to the longitudinal axis (X-X), and comprising a landing area (1b), a parking area (3) And an apparatus for gripping, raising, orienting and transporting helicopters, having an own longitudinal axis (Y-Y), from said landing area (1b) to the parking area (3), said apparatus comprising support means (5a,5b) able to travel into said rails (4)
characterized in that
said apparatus consists of a pair of arms (6) parallel to said longitudinal axis (X-X), connected to said support means (5a,5b) and able to be translated independently of one another, at the end of each arm (6) directed towards the landing area (1b) there being rotationally connected a beam (9) carrying a cursor (11) sliding along it and carrying devices (13) for gripping corresponding securing means (2e) integral with the shanks of the main wheels (2a) of the helicopter (2).

3. Deck according to Claim 1, characterized in that said beams (9) are at least partially hollow in the longitudinal direction.

4. Deck according to Claim 2, characterized in that one of said beams (9) accommodates inside it a bolt (10) which can be operated in the longitudinal direction by associated means (10a) for engagement inside the other beam when they are arranged facing and coaxial with each other.

5. Deck according to Claim 4, characterized in that at least one of the two beams (9) is slidable on said bolt (10).

6. Deck according to Claim 1, characterized in that one of said cursors (11) carries a bar (11a) extending parallel to said rotating beam (9), while the other cursor (11) is provided with a corresponding seat (11b) for coupling with said bar (11a).

7. Deck according to Claim 6, characterized in that means are provided for relative fastening, in the longitudinal direction, of said bar (11a) and said cursor (11) provided with the seat (11b).

9. Deck according to Claim 8 characterized in that said means for effecting sliding of the beams (7) with respect to the arms (6) are able to cause displacement of the two beams (7) by the same amount and in opposite directions.

10. Deck according to Claim 1, characterized in that said devices (13) for gripping the helicopter comprise a flat vertical plate (13a) able to come into abutment with a corresponding head (2e) of a pin (2d) integral with the shank of the wheels (2a) of the helicopter, said flat plate having a bottom shoulder (13b) able to act against said head in the vertical direction, and movable means (13c) for gripping in the horizontal direction and locking (13d) in the vertical direction the head (2e) of the pin (2d).

11. Deck according to Claim 10 characterized in that said means for gripping in the horizontal direction consist of two L-shaped jaws (13c) moved by a hydraulic cylinder or the like.

12. Deck according to Claim 10 characterized in that said means for locking in the vertical direction consist of a nose-piece (13e) concealingly housed in a seat (13d) of the plate (13a) upon operation of associated actuating means acting against the thrusting action of resilient means (13f) 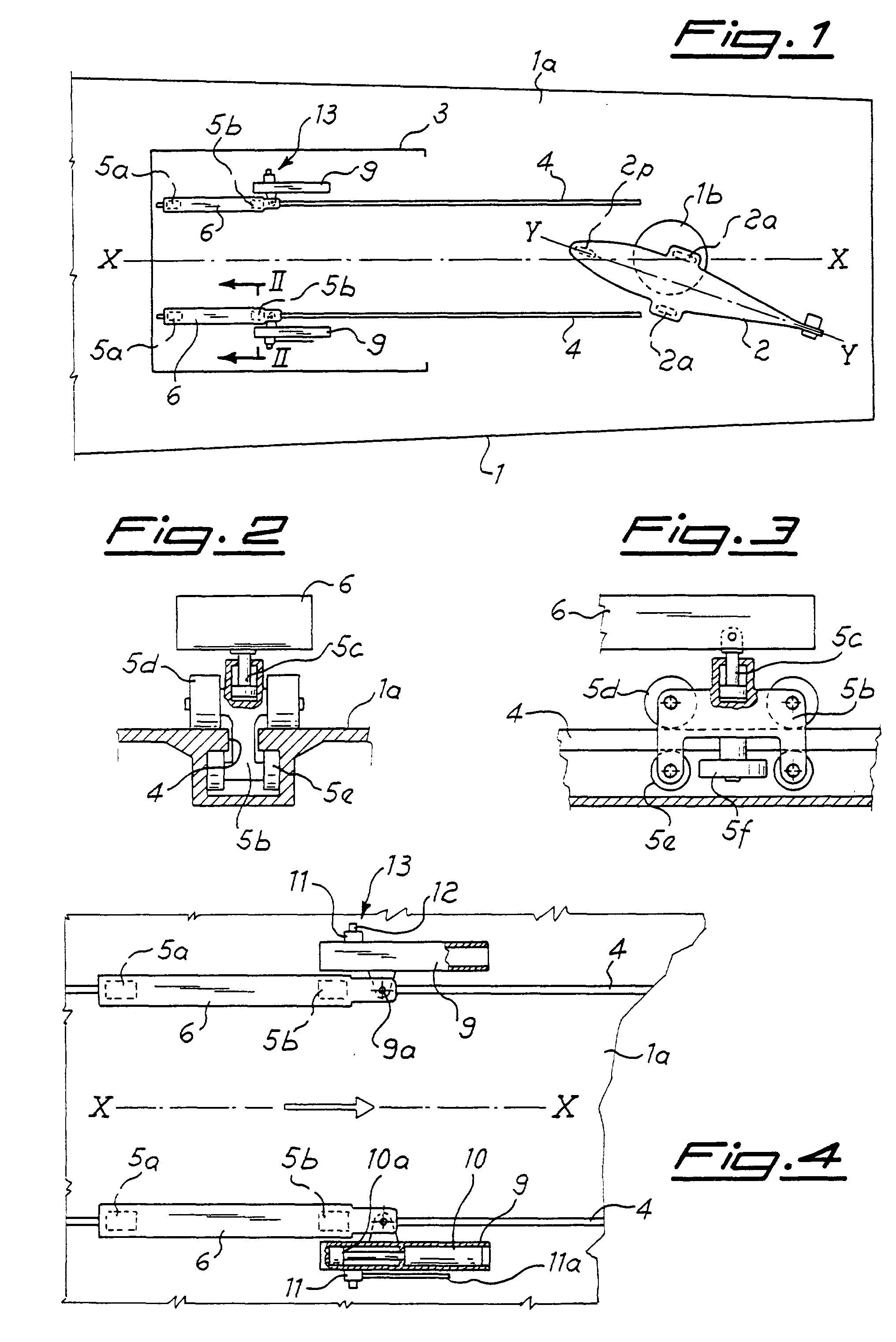 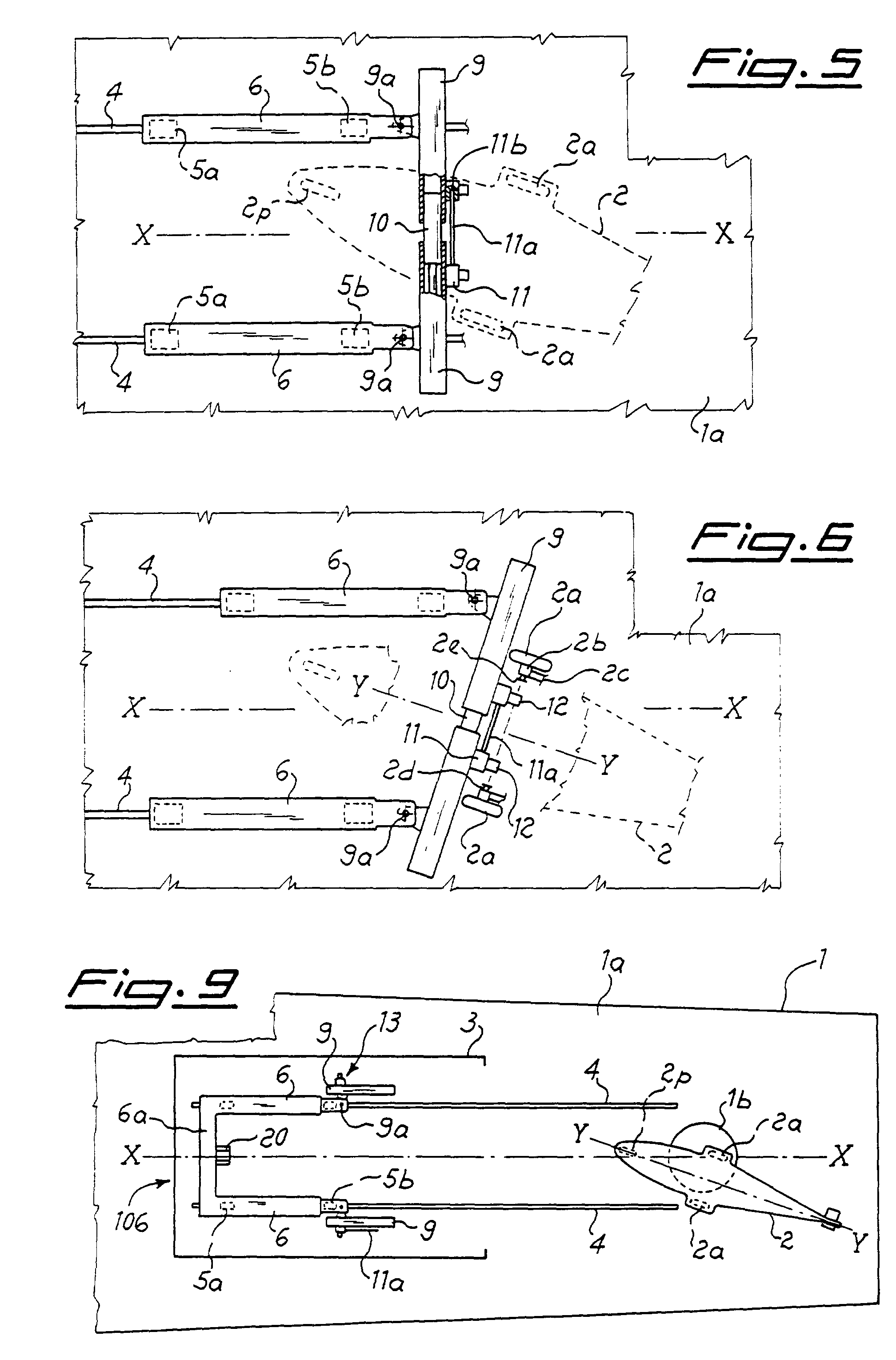 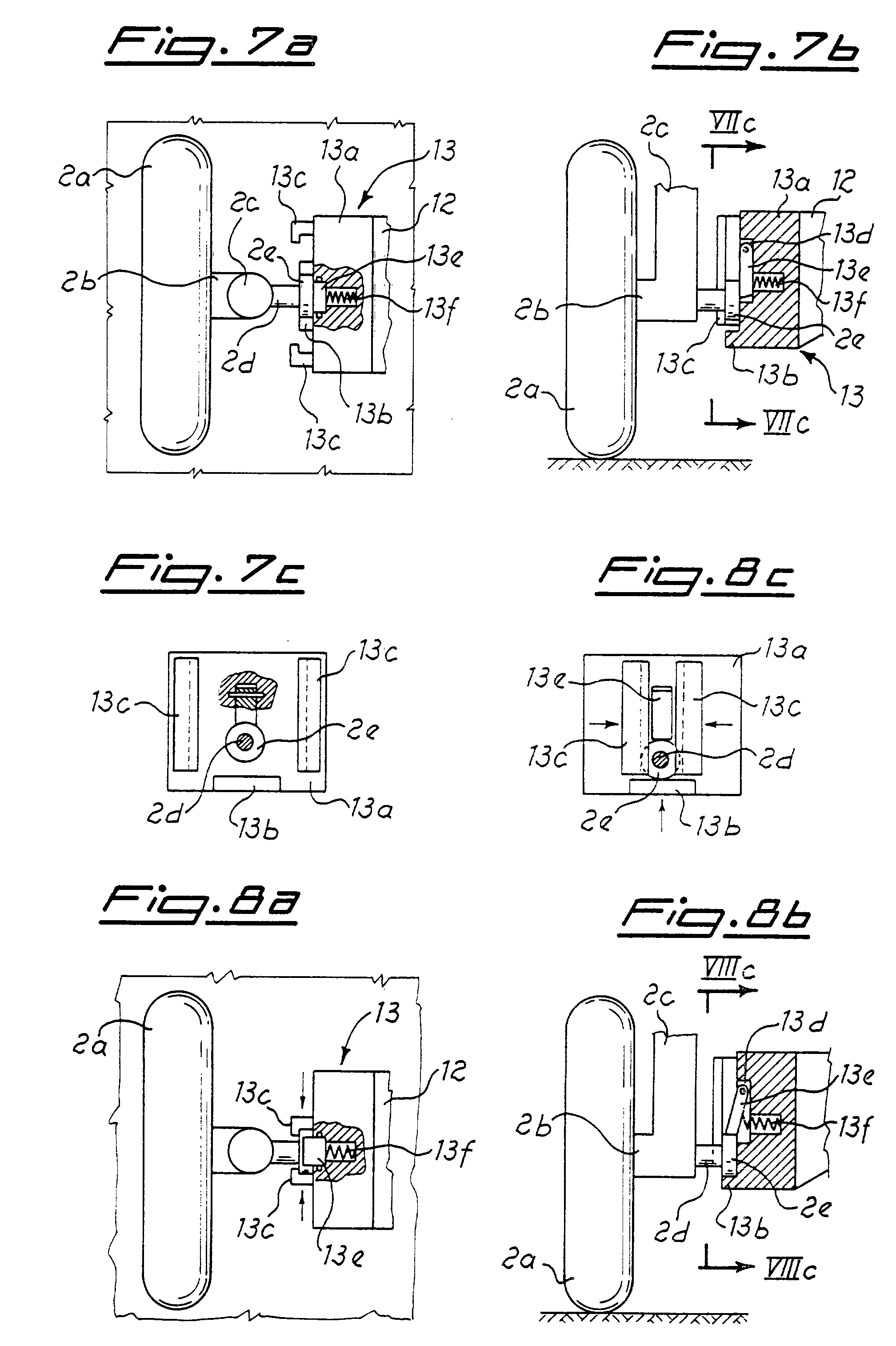 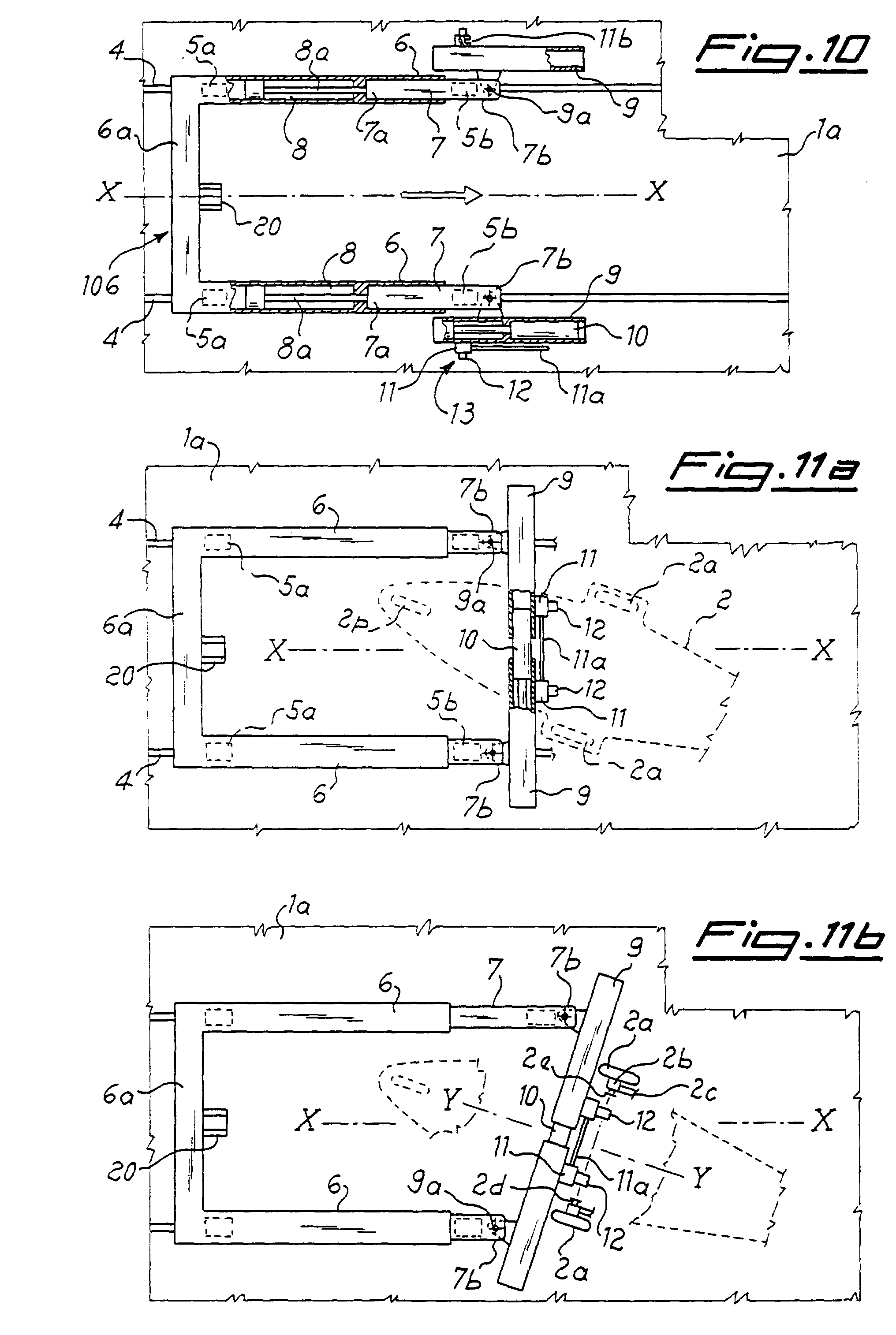