[0001] The present invention relates to an inverter device for the power supply of an electrical load, in particular of a discharge lamp.

[0002] Devices of this type are described for example in GB-A-2,124,042, EP-A-0 667 734, EP-A-0 488 478, US-A-5,426,344.
[0003] A circuit according to the preamble of claim 1 is disclosed in EP-A-0621743.
[0004] These devices have a rectifier powered by an AC source, for example the standard electrical mains. In parallel with the rectifier bridge (see for example GB-A-2,124,042) there is provided a filter capacitor and a smoothing capacitor for supplying a substantially DC voltage to an inverter circuit section, comprising controlled switching means for powering a load with an oscillating circuit at a high-frequency voltage. A diode is interposed between the rectifier bridge and the filter capacitor on the one hand and the smoothing or "bulk" capacitor on the other.
[0005] Circuits of this type must exhibit a high power factor as close as possible to one and a limited crest factor. Power factor is understood to mean the ratio of active power to apparent power, while crest factor is understood to mean the ratio of the maximum value of the current in the load to its root-mean-square value and measures the amount of fluctuation, at a frequency typically double the frequency of the AC supply, of the peak value of the current at the load. In inverters for the power supply of discharge lamps the oscillation in the peak value of the load current is detrimental since it reduces the lifetime of the lamp.
[0006] The object of the present invention is the production of an inverter device which makes it possible to alleviate the drawbacks of conventional devices.
[0007] In particular, the object of the invention is to produce an inverter circuit of the type mentioned above which exhibits a greater power factor than conventional circuits.
[0008] A further object of an improved embodiment of the invention is the production of a circuit with a reduced crest factor, and in particular a circuit in which it is possible to increase the power factor and reduce the crest factor independently of one another.

[0009] These and further objects and advantages, which will become clear to those skilled in the art from reading the following text, are achieved with an inverter circuit according to claim 1. In the device according to the invention in the power-supply section, in series with the rectifier bridge supplied by the AC voltage source, there is arranged an inductor with a value such that the said power-supply section exhibits a predominantly inductive behaviour towards the load. The predominantly inductive behaviour thus achieved causes the inverter and the load powered by it to see a source of current instead of a source of voltage, as in conventional circuits, with a consequent improvement in the power factor of the device.
[0010] From EP-A-0488478 an inverter device with a high power-factor input current is known. This device provides an inductor which, however, is not connected in series with the rectifier bridge and upstream of the inverter. The inductor of this prior art device is connected between the rectifier bridge and the resonating load circuit.
[0011] The inductor according to the invention and provided in the power supply section can be arranged either upstream or downstream of the rectifier bridge.
[0012] An auxiliary capacitor which resonates with the said inductor when the voltage across the terminals of the rectifier bridge passes through the zero value can advantageously be arranged between the inductor and the inverter (consisting for example of a half-bridge structure with two high-frequency controlled cutouts). This makes it possible, as will clearly be seen below with reference to an illustrative implementation of the invention, to reduce the crest factor independently of the power factor.
[0013] Upstream of the rectifier bridge, between it and the AC voltage source, there is also advantageously provided, in a manner known per se, an EMI filter (electromagnetic interference filter) against conducted noise, with a cutoff frequency typically greater than 10 kHz.
[0014] Further advantageous characteristics and implementations of the invention are indicated in the attached dependent claims.

[0015] The invention will be better understood by following the description and appended drawing, which shows a practical non-limiting exemplification of the invention. In the drawing:

Fig. 1 shows a schematic of a circuit according to the invention, in a first implementation;

Figs. 2 to 6 show the five successive phases of operation of the circuit of Fig. 1;

Fig. 7 shows a modified implementation of the device according to the invention;

Fig. 8 shows an improvement of the device according to the invention with an auxiliary resonant capacitor;

Figs. 9 and 10 show two diagrams indicating the profile of the current in the inductor in series with the rectifier bridge in the implementation of Fig. 7; and

characterized in that said power-supply section (3) includes an inductor (39) arranged in series with said rectifier bridge (25), connected upstream of said half bridge arrangement and upstream of said resonant circuit (13, 15) said inductor having a value such that said power-supply section (3) exhibits a predominantly inductive behaviour towards the inverter section.

2. Device according to Claim 1, characterized in that the said unidirectional component (31) is arranged between a plate of the filter capacitor (27) and the corresponding plate of the smoothing capacitor (29).

5. Device according to Claim 1 or 2 or 3, characterized in that the said inductor (39) is arranged between the rectifier bridge (25) and the said inverter section (5).

6. Device according to Claim 5, characterized by a diode (41) in parallel with the said filter capacitor (27).

7. Device according to one or more of the preceding claims, characterized in that the said inverter section (5) comprises an auxiliary capacitor (43) which resonates with the said inductor (39) when the voltage across the terminals of the rectifier bridge (25) passes through the zero value.

8. Device according to Claim 7, characterized by a unidirectional element (45) in parallel with the said auxiliary capacitor (45). 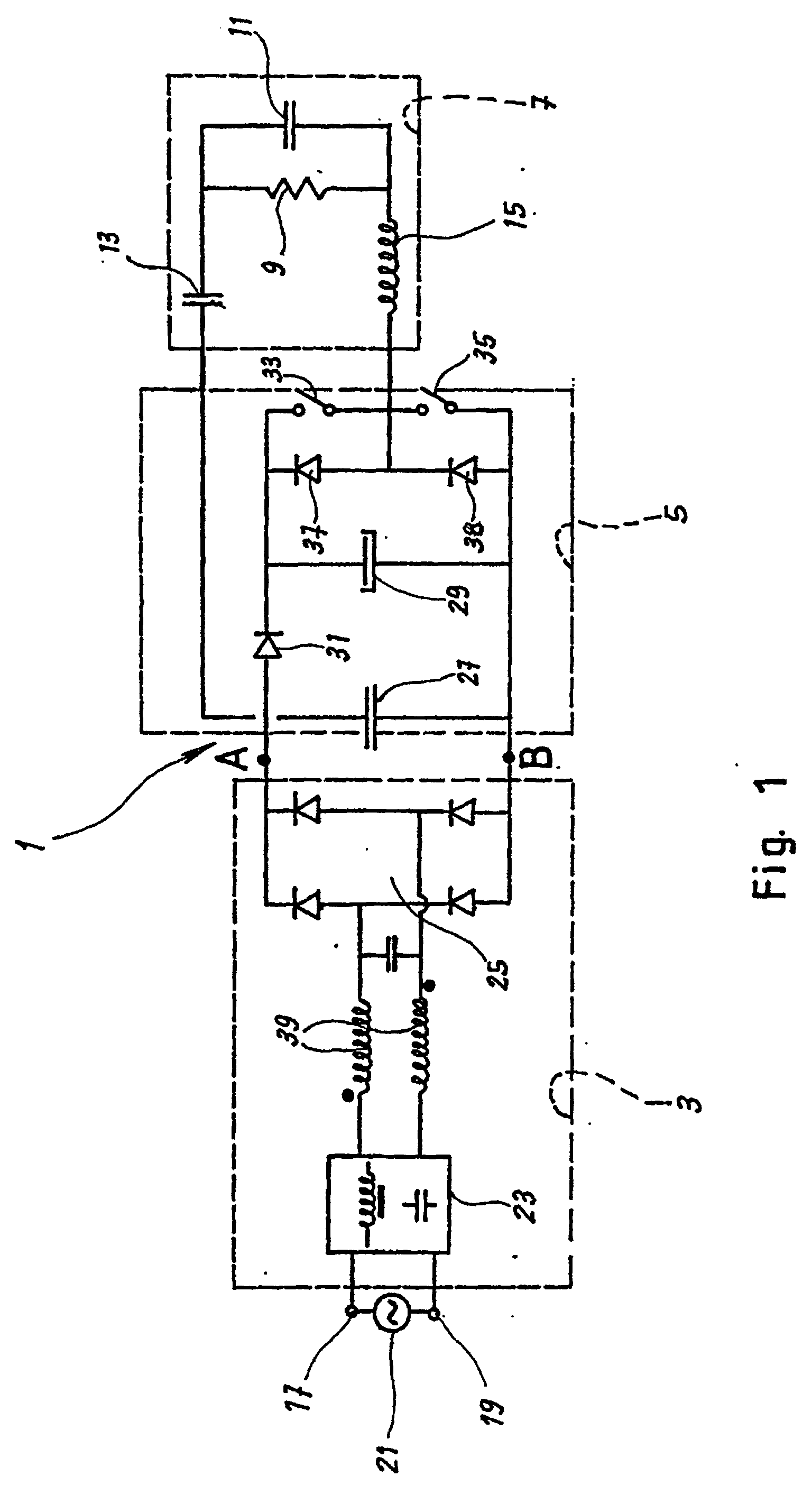 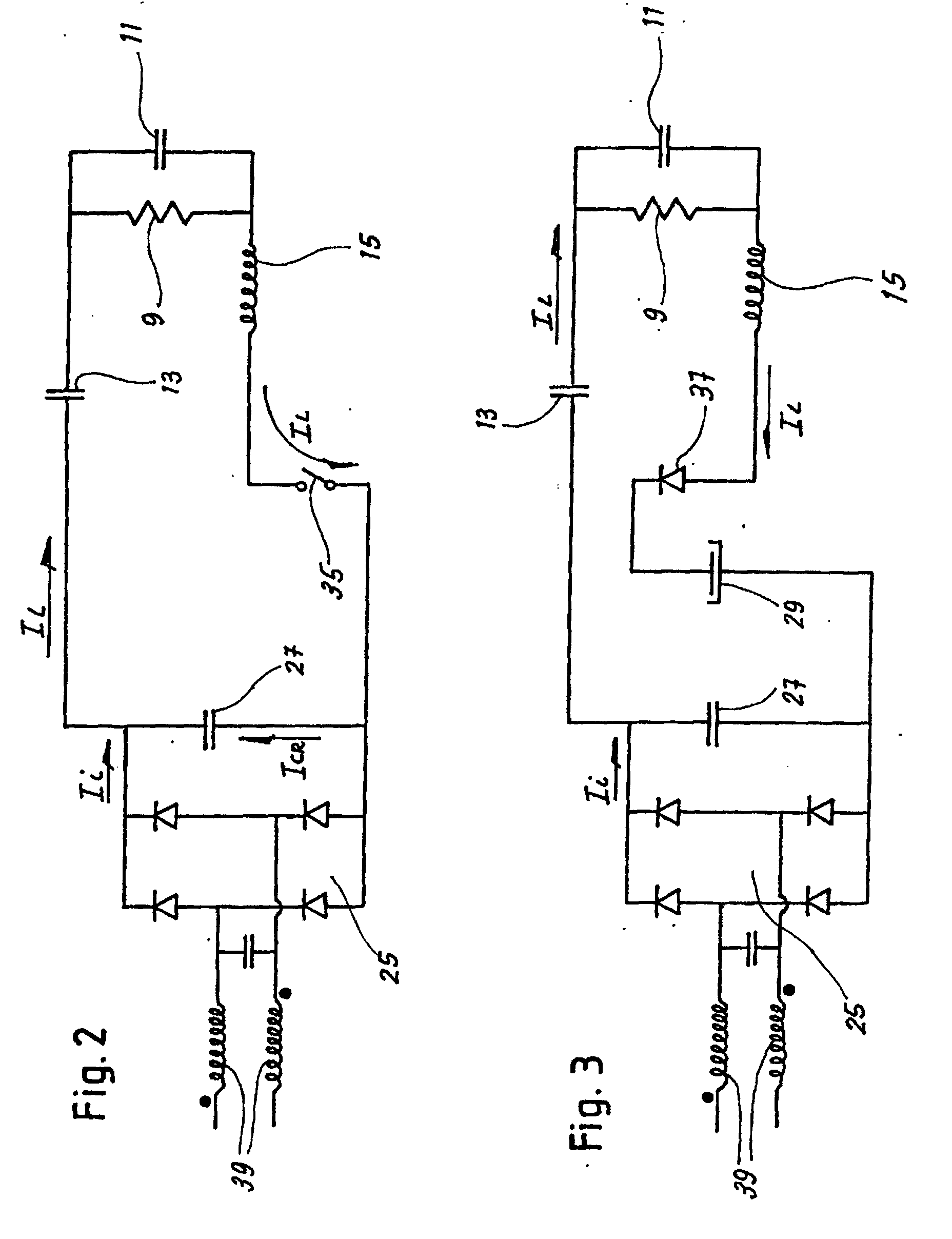 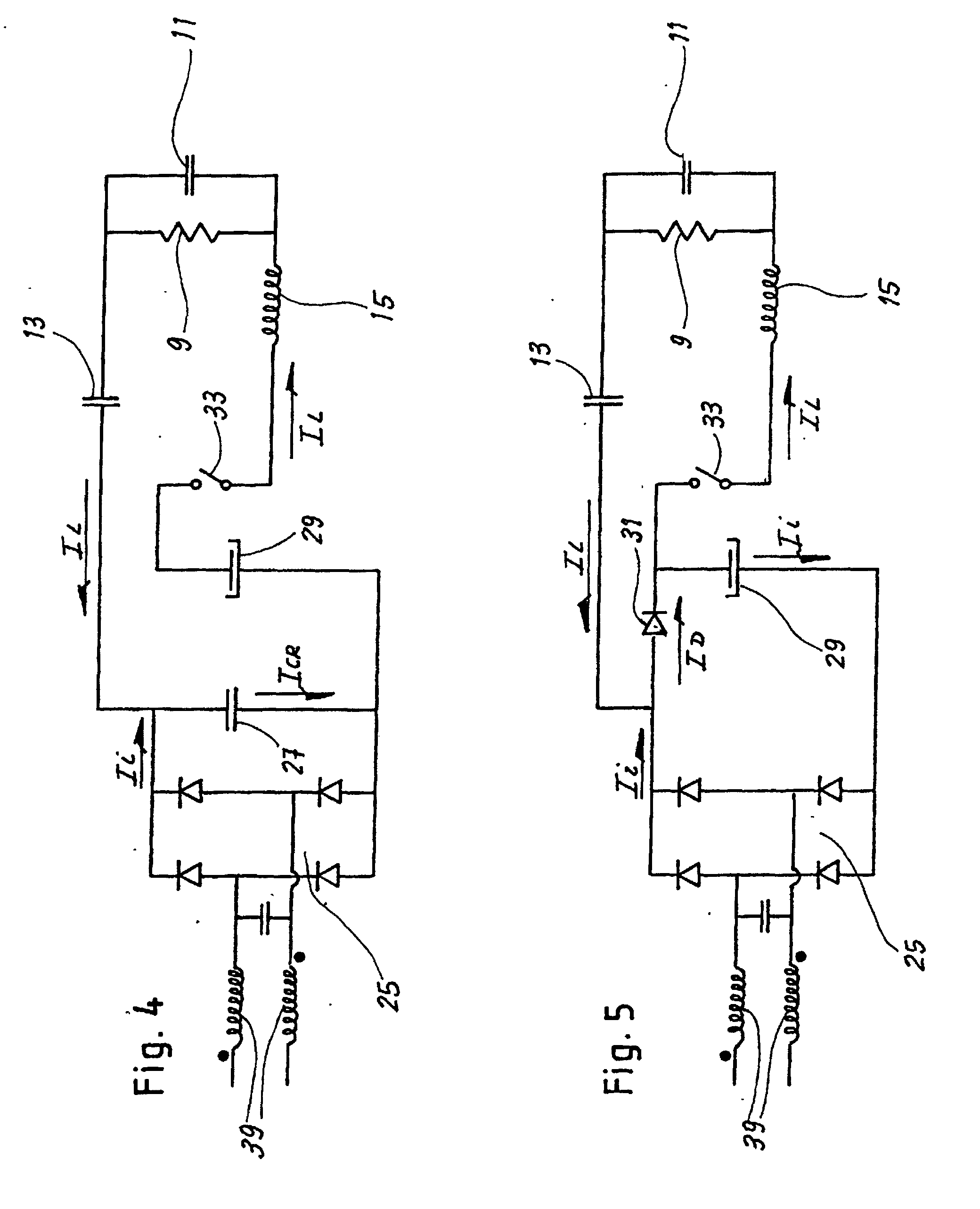 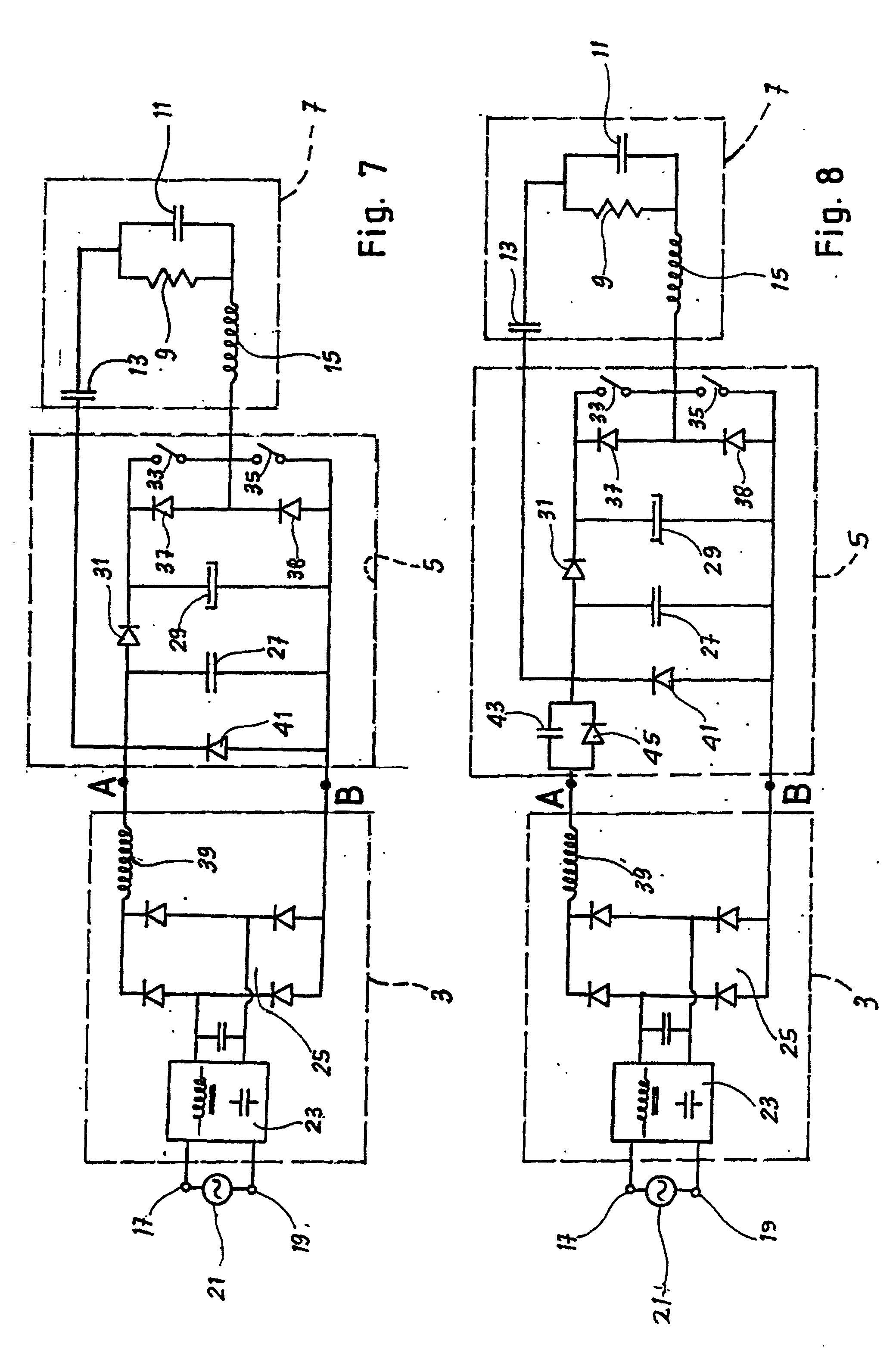 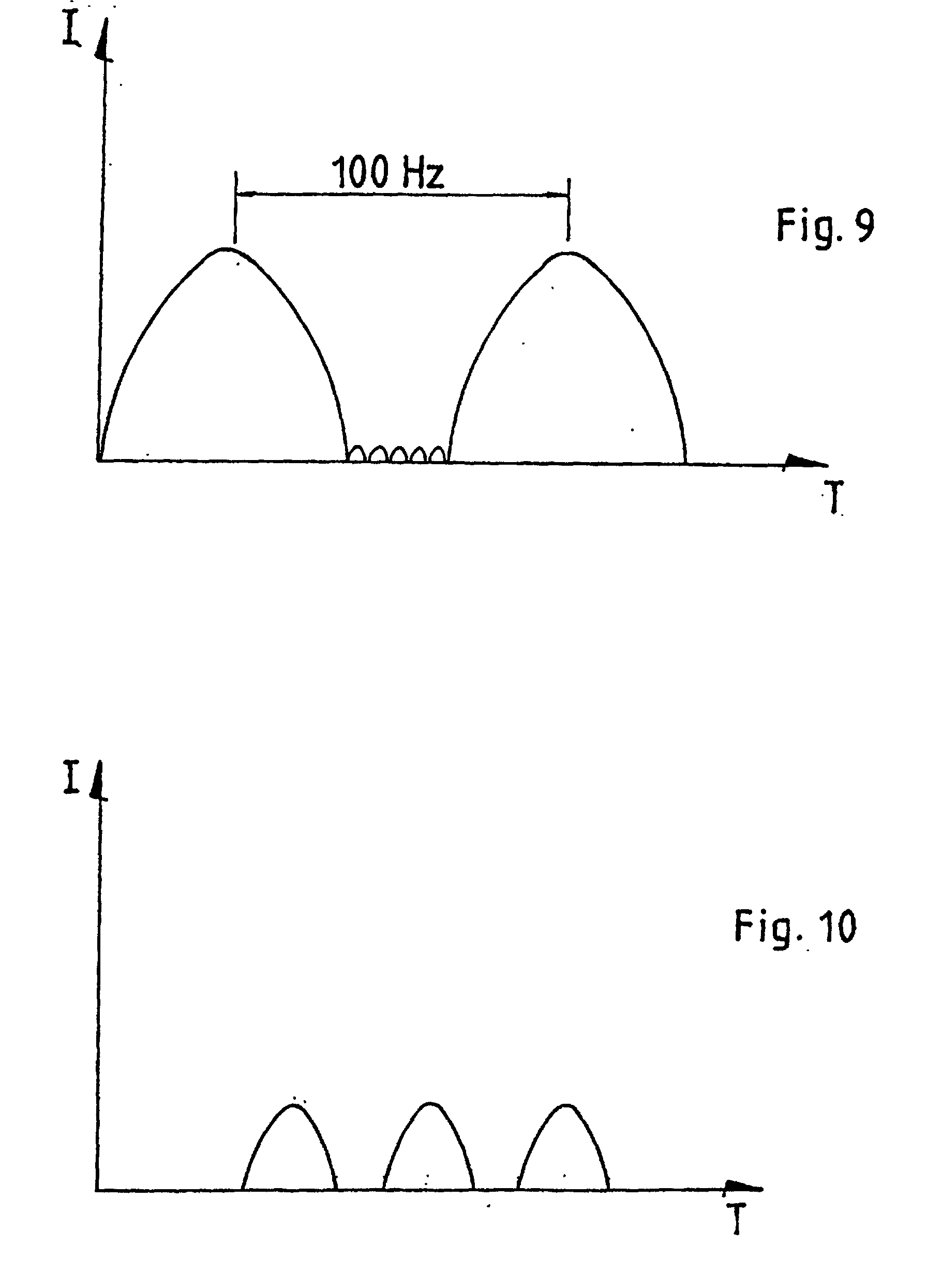 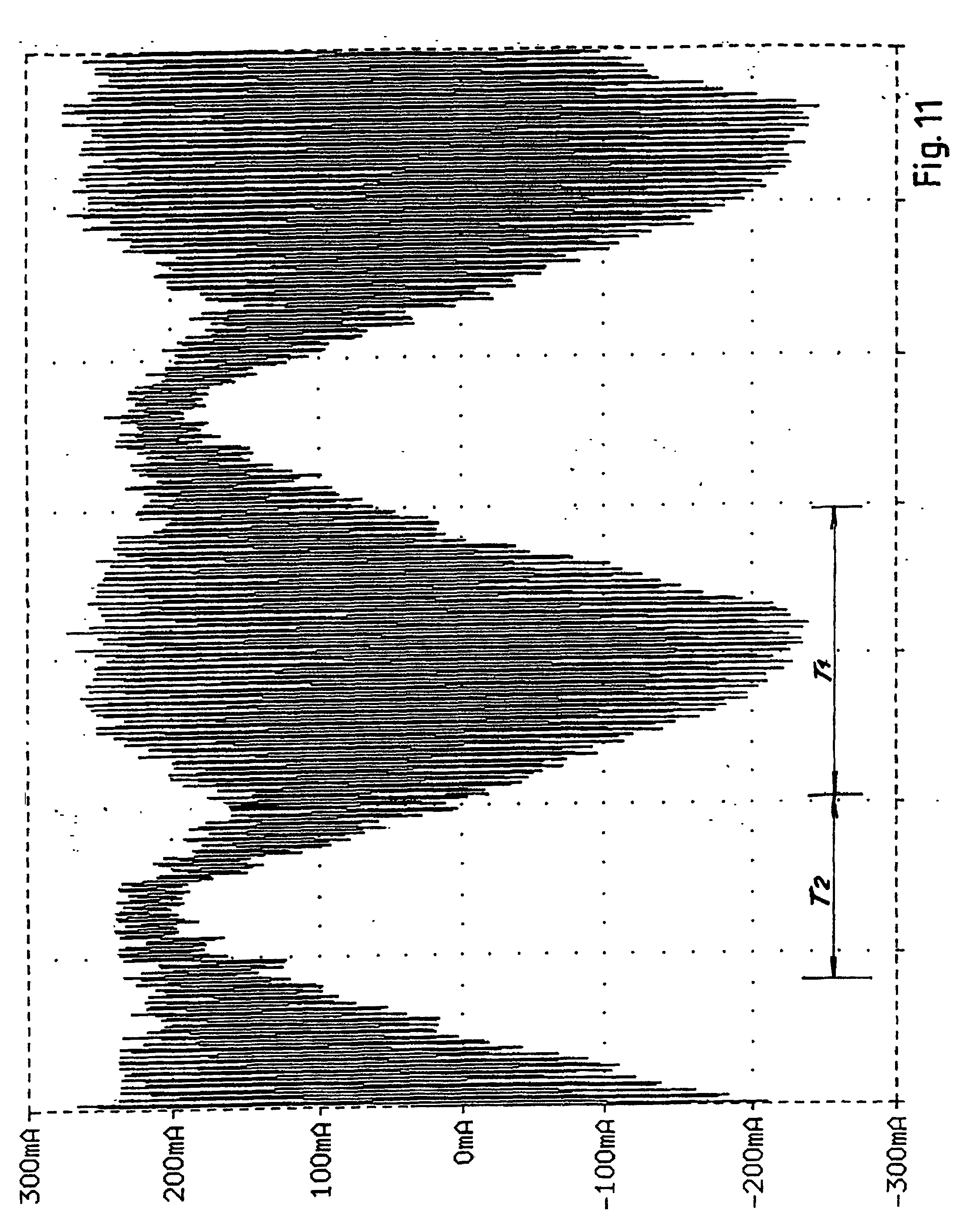 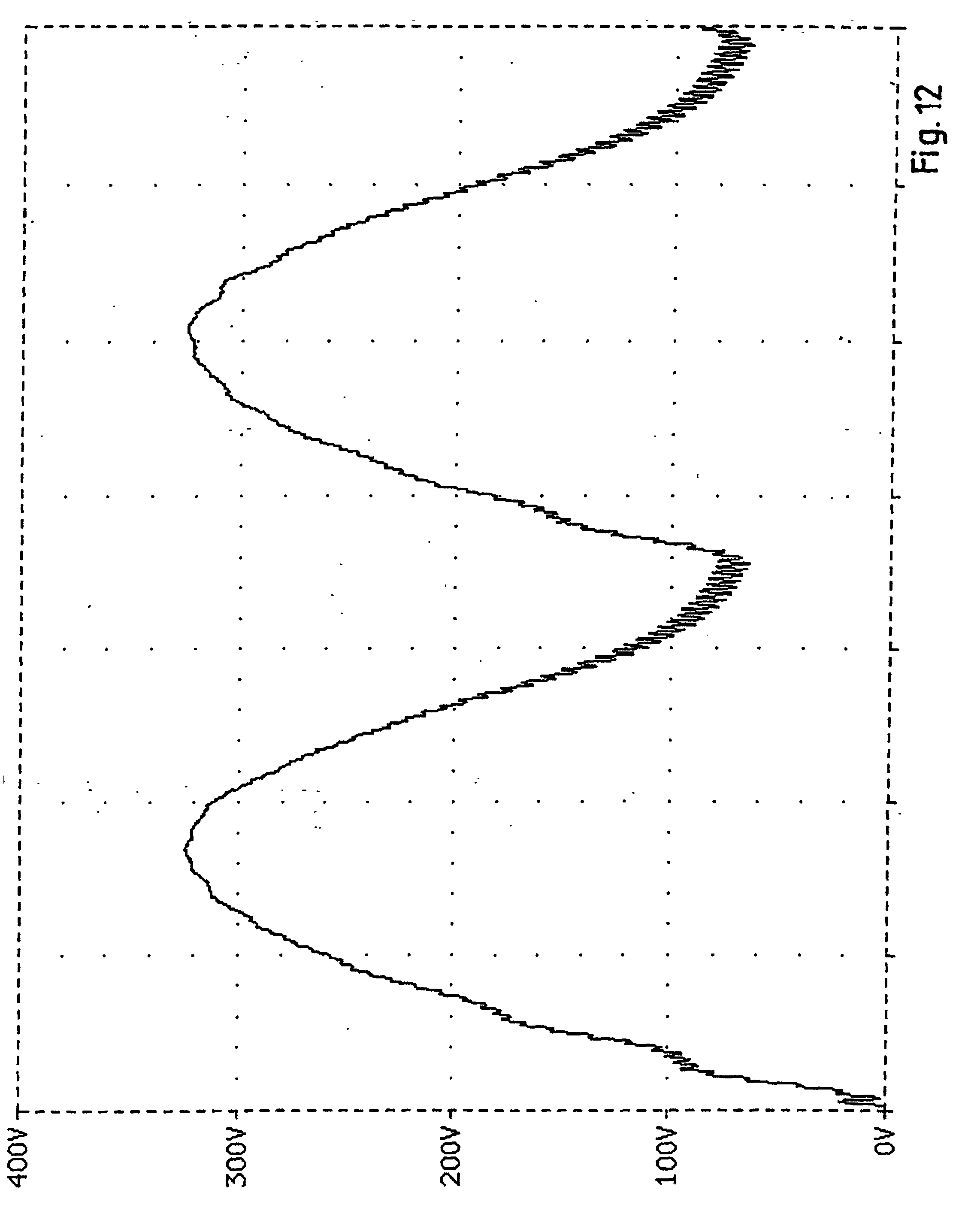 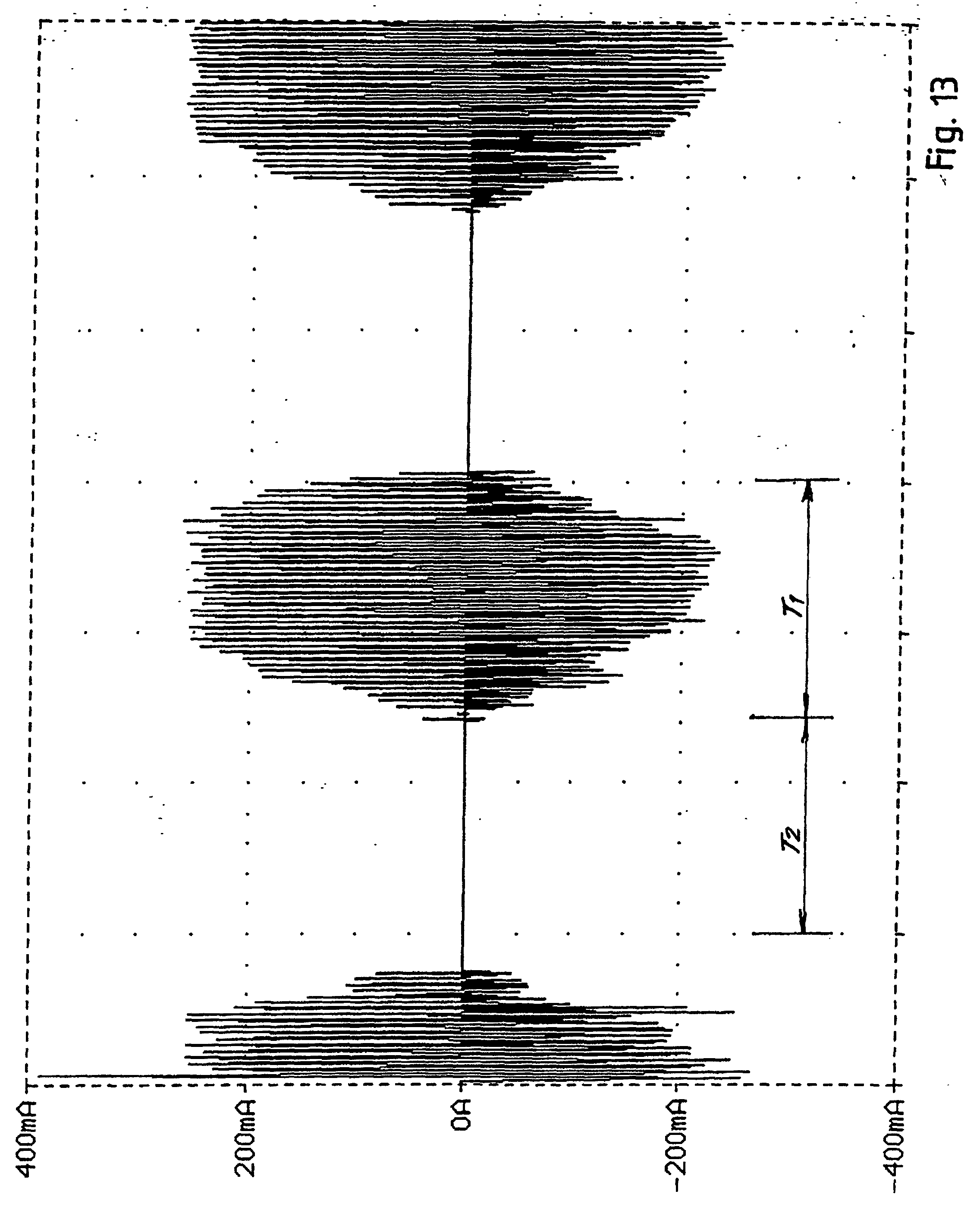