Background to The Invention

[0002] Traditionally, user traffic in a CDMA system is circuit switched and based on 'single user per code'. Once a call has been set up, the connection is maintained throughout the duration of the service request. A Dedicated Traffic Channel (DTCH) is assigned to each active user for both the up-link and the down-link. Each DTCH is characterised by a unique spreading code, i.e. each user is allocated a code ('single user per code'). Throughout the entire session, the DTCH is used exclusively by the active user.
[0003] This circuit switched method is robust, and results in high system capacity by supporting macro-diversity (soft hand-over), power control, and limited overhead. However, in wide-band multi-service CDMA systems bursty traffic needs to be supported. Bursty traffic is supported by adjusting the data rate, and hence the spreading factor and spreading code. The need to quickly adjust the spreading code leads to highly complex code allocation algorithms.
[0004] Another popular method for accommodating bursty services is through packet switched data. ETSI (European Telecommunications Standards Institute) UMTS W-CDMA and ARIB (Association of Radio Industry Business) W-CDMA propose to use Random Access Channel (RACH)/Forward Access Channel (FACH) to transmit infrequent bursty packet data. The advantage of such a scheme is that there is a quick set up time, and a dedicated channel is not required. However, the transmission mechanism uses open loop power control only, and macro-diversity is not supported.
[0005] It is a well-known problem for the UMTS W-CDMA air interface that the shortage of down-link codes is a problem. In the prior art, only one down-link scrambling code is used. Associated with each scrambling code is a channelisation code tree. A set of codes, i.e. a branch of the code trees, is allocated to each user (a code set is allocated to facilitate peak data rate) The code sets used by each user are orthogonal to each other.
[0006] So as long as the timing of each user code (from the code set) is strictly controlled, there will be no increase in the interference level (or cross-correlation properties). Since there is only one down-link scrambling code and a code set is assigned to the peak data rate of each user, the code shortage problem arises. Increasing the number of scrambling codes (which is not orthogonal) does relax the problem. However it worsens the cross-correlation properties and affects the system capacity. Moreover it does not improve the code usage efficiency.
[0007] This problem is particularly increased for data transmission where the code channels are allocated to bursty packet data users, because of inefficient usage of the code due to the bursty nature of the packet switching service.
[0008] Each jump in data rate requires a change in physical channel and hence a change in code. So over time, many different codes are used. If the data rate is too high to be accommodated by a single physical channel, then multiple codes are used simultaneously.
[0009] In the up-link, each user is assigned a unique scrambling code, each scrambling code being associated with a channelisation code tree. Hence there is no code shortage problem.
[0010] It has been suggested to introduce another layer of coding, thereby increasing the number of scrambling codes per cell, to mitigate the problem. However increasing the number of scrambling codes per cell does not help to increase code efficiency, and also increases the complexity of the receiver.
[0011] To simplify code allocation and increase code utilisation efficiency it has been suggested to transmit packet data by multiplexing many bursty packet data users onto a single physical dedicated traffic channel. This multiplexing scheme uses two established techniques for packet data transmission: multiple packet data users use a common control channel; and each packet data user is allocated a single dedicated physical channel.
[0012] This scheme does have advantages over both RACH/FACH and 'single user per code' transmission schemes for packet data transmission, in that the proposed scheme simplifies orthogonal spreading code allocation whilst maintaining the benefit of per user per code transmission (i.e. closed loap power control). The drawback of this approach is that it achieves the goal of efficient code by use requiring an unnecessarily large level of overhead, and providing unneeded flexibility than that which is strictly necessary to achieve the goal. It is therefore an object of the present invention to provide a technique for transmitting packet data, which minimises the problems, associated with down-link code shortage in conventional systems, and which requires minimal modification to the physical layer structure, at minimum levels of additional overhead.
[0013] It is known from International (P.C.T.) Patent Publication WO 95/23464 to provide a method of transmitting data in a code division multiple access system, comprising the steps of:

It is known from International (P.C.T.) Patent Publication WO 95/23464 to provide a method of transmitting data in a code division multiple access system, comprising the steps of:

[0014] It is known from European patent application EP-A-0600713 to provide a method of transmitting data in a code division multiple access system, comprising the steps of:

multiplexing the data blocks of all the data streams for each given time frame.

[0015] The present invention is characterised over the disclosure of EP-A-0600713 by encoding for transmission the multiplexed data blocks of each given time frame using a single channelisation code, and in that higher level signalling is used to differentiate the data blocks of the different users.
[0016] There is thus proposed a scheme to multiplex many packet data users onto a single down-link shared channel in order to mitigate both code allocation algorithm complexity and down-link code shortage problems for a UMTS W-CDMA system. A composite transport block concept is used when multiplexing is performed.

Figure 2 illustrates the transport blocks supplied to the physical layer in an exemplary three-user system;

Figure 3 is a schematic of a conventional implementation of the physical layer for processing the transport blocks of Figure 2;

Figure 4 illustrates conceptually the processing of the transport blocks according to the present invention in an exemplary three user system; and

Figure 5 is a schematic of an implementation of the physical layer for processing the transport blocks of Figure 4 according to the present invention.

1. A method of transmitting data in a code division multiple access system, comprising the steps of:

2. The method of claim 1 in which the successive time frames are of variable length.

3. The method of claim 1 or claim 2 in which the data blocks are transport blocks.

4. The method of any preceding claim in which the outputting and multiplexing (26) steps are carried out in the multiple access sub-layer (4a).

5. The method of any preceding claim in which the encoding steps (14d) are carried out in the physical layer.

6. The method of claim 3 in which the transport blocks in each time frame of each user data stream are of different data rates.

8. The code division multiple access communication system of claim 7 in which the successive time frames are of a variable length. 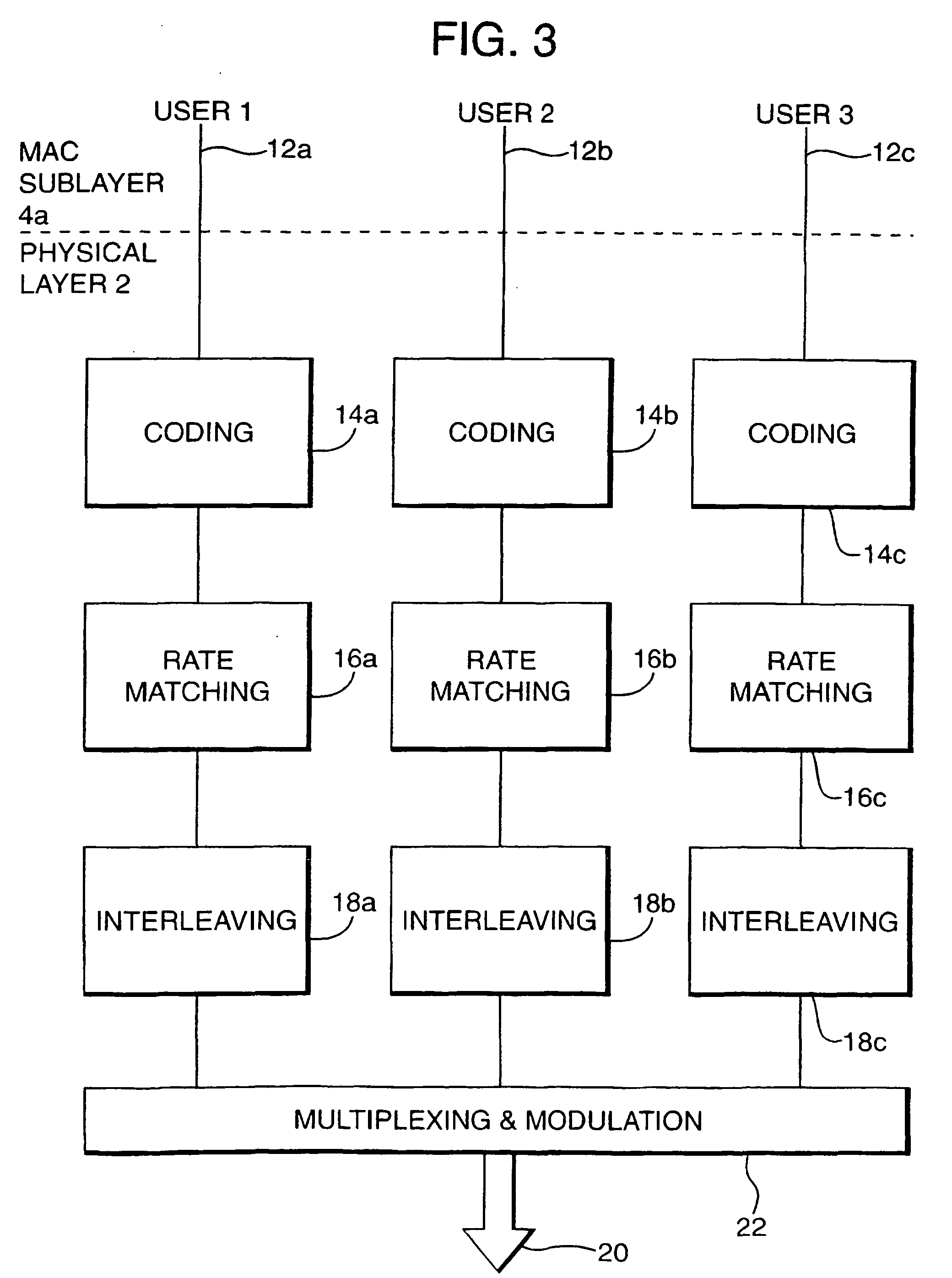