[0001] The present invention relates to a card game in which a single player may play multiple hands at the same time, preferably with two or more of the hands having common cards and preferably in a form that can be configured for either traditional table play or electronic play.

[0002] Many casino players or other game players are especially attracted to games which include relatively large prizes (typically in addition to numerous smaller prizes). Large prize games are believed to attract casino customers even when the large prizes have relatively small odds (relatively low probability of being won, in any round of the game) and, indeed, it generally is found that casinos must provide relatively low odds for larger-sized prizes, as a practical matter.
[0003] This situation can present problems with regard to many traditional games involving or based on real or simulated card decks since the traditional winning hands for many such games have odds of occurrence which are too high to make it feasible to provide relatively larger prizes. Accordingly, it becomes desirable to modify traditional card games to provide for at least some winning hands or outcomes with relatively low odds of occurrence and which, accordingly can be feasibly associated with relatively large prizes.
[0004] Although there are numerous manners of potentially modifying traditional games to include low-odds winning outcomes, it is believed especially useful to provide modifications in such a fashion as to maintain a high level of entertainment value or other interest-generating aspects of the game and/or to maintain certain of the features of the games with which players may be familiar and/or comfortable. For example, although relatively low-odds winning hands can be provided by defining hands which have a large number of cards (e.g. a modified poker hands with 13 cards could have relatively low odds of achieving a 13-card straight), it is believed that players prefer to have a number of cards, per hand, similar to that traditionally associated with the game (such as five cards or seven cards for poker hands). Accordingly, it would be useful to provide modifications for traditional card games which can include hands with a number of cards similar to the number of cards in traditional hands for that game, but which still define winning outcomes having a relatively low probability of occurrence (thus making feasible relatively higher prizes, associated with such outcomes).
[0005] It is believed that while many players prefer electronic or "slot" games, others prefer games which are played with ordinary (physical) card decks and/or prefer to have the ability to switch between substantially similar electronic and table versions of a game. Accordingly, it would be useful to provide for modifications to traditional games which not only can make it feasible to provide relatively large prizes but also which can be readily implemented as either table games or electronic games.
[0006] In certain casino games especially electronic games, it is possible to use programming or other techniques to define odds for certain game outcomes which are substantially different from odds that can occur in response to cards or other physical gaming objects. For example, it would be possible to decrease the odds of achieving a particular poker hands outcome, such as a royal flush, in an electronic poker machine, by configuring the programming such that the royal flush occurs at a relatively low frequency (i.e. lower than the frequency with which a royal flush occurs in ordinary play with a physical deck of cards). However, such manipulation of odds may be prohibited by gaming regulatory authorities and, in any case, may be confusing or annoying to potential casino players who may expect probabilities of electronic card decks to closely resemble probabilities found in physical card decks (with which any players may be familiar). Accordingly, it would be useful to provide modifications of card games which can provide one or more outcomes with relatively low probabilities of occurring, without substantially departing from the probabilities that would occur using a physical deck of cards.

[0007] The present invention is primarily directed to a game involving real or simulated cards in which a given player, during any one round of the game play, effectively has two or more card hands at the same time. Preferably, there is at least one card which is common to two or more of the hands and, even more preferably at least two cards in any one hand are also cards which are cards of at least one other hand, and preferably are cards of at least two different hands.
[0008] In one embodiment, the player receives four cards in a rectangular array with the two cards of the two columns (or two rows) being members of first and second different hands and the two diagonally-positioned sets of cards being members of third and fourth different hands. In one embodiment, the four cards in the array can provide an "instant" outcome, e.g. if the cards constitute a predefined winning outcome such as a winning poker outcome (e.g. four of a kind) or a blackjack winning outcome (cards totaling 21). Preferably, in the absence of an "instant win", players can continue to play towards a winning poker or blackjack hand by receiving additional "draw" cards in any or all of the four hands. Because a single player can potentially obtain winning hands in all of a multitude of (e.g. four) hands, it is possible to provide one or more relatively large prizes associated with such a relatively improbable outcome, while still providing game play, with respect to each of the multiple hands, which substantially comports with blackjack, poker or other card game rules with which the player may be familiar.
[0009] According to one aspect, a physical card game or electronically simulated card game is provided in which each of one or more players received cards which define two or more card hands, with at least one card in common. In one embodiment, the initial cards are arranged in a rectangular array with rows, columns and/or diagonals of the array defining the hands. Each hand can be played and/or evaluated using certain aspects of blackjack, poker or other traditional card game play or evaluation. At least some prizes or top winning outcomes for a round of play must include winning outcomes from at least two, and preferably from all, of the hands played by a given player. The relatively low odds of achieving highest-winning combinations on all hands makes it feasible to provide the game with relatively large prizes associated with such low-probability outcomes. In one embodiment, certain subcombinations of a player's cards, such as all initially-dealt cards, are evaluated for instant win combinations. In one embodiment, one or more additional cards may be dealt for use in defining some or all of said instant win combinations.

Fig. 1 displays an array of card positions for table or electronic play according to one embodiment of the present invention;

Fig. 2 depicts an array of card positions for electronic or table play according to an embodiment of the present invention;

Figs. 3A and 3B are flow charts depicting a gaming procedure according to embodiments of the present invention.

1. A method usable for playing a card game comprising:

receiving at least a first wager;

3. A method as claimed in claim 2 further comprising receiving, from said player, an indication of a decision whether to receive additional cards in each of said four hands.

4. A method as claimed in claim 1 further comprising dealing at least two cards to define a dealer hand.

5. A method as claimed in claim 1 wherein said step of evaluating comprises evaluating each of said hands as a blackjack hand.

6. A method as claimed in claim 1 wherein said step of evaluating includes evaluating each said hand as a poker hand.

7. A method as claimed in claim 1, further comprising awarding a highest prize only if all four of said hands provides a total value, calculated according to blackjack evaluation, of 21.

8. A method as claimed in claim 4 further comprising awarding a highest prize only if a second predetermined number of said hands has a total value, evaluated according to blackjack card valuation, less than 22 but greater than the blackjack valuation of said dealer hand.

means for receiving at least a first wager;

12. Apparatus as claimed in claim 11 further comprising means for receiving, from said player, an indication of a decision whether to receive additional cards in each of said four hands.

13. Apparatus as claimed in claim 10 further comprising means for dealing at least two cards to define a dealer hand.

16. Apparatus as claimed in claim 10, further comprising means for awarding a highest prize only if all four of said hands provides a total value, calculated according to blackjack evaluation, of 21.

17. Apparatus as claimed in claim 13 further comprising means for awarding a highest prize only if a second predetermined number of said hands has a total value, evaluated according to blackjack card valuation, less than 22 but greater than the blackjack valuation of said dealer hand.

18. Apparatus as claimed in claim 10 further comprising means for performing an instant win said predetermined number of initially dealt cards for a predefined winning combination regardless of membership of cards in said hands and awarding a prize if said instant win evaluation indicates a winning combination.

19. A gaming terminal usable for playing a card game comprising:

a wager acceptor configured to accept at least a first wager; 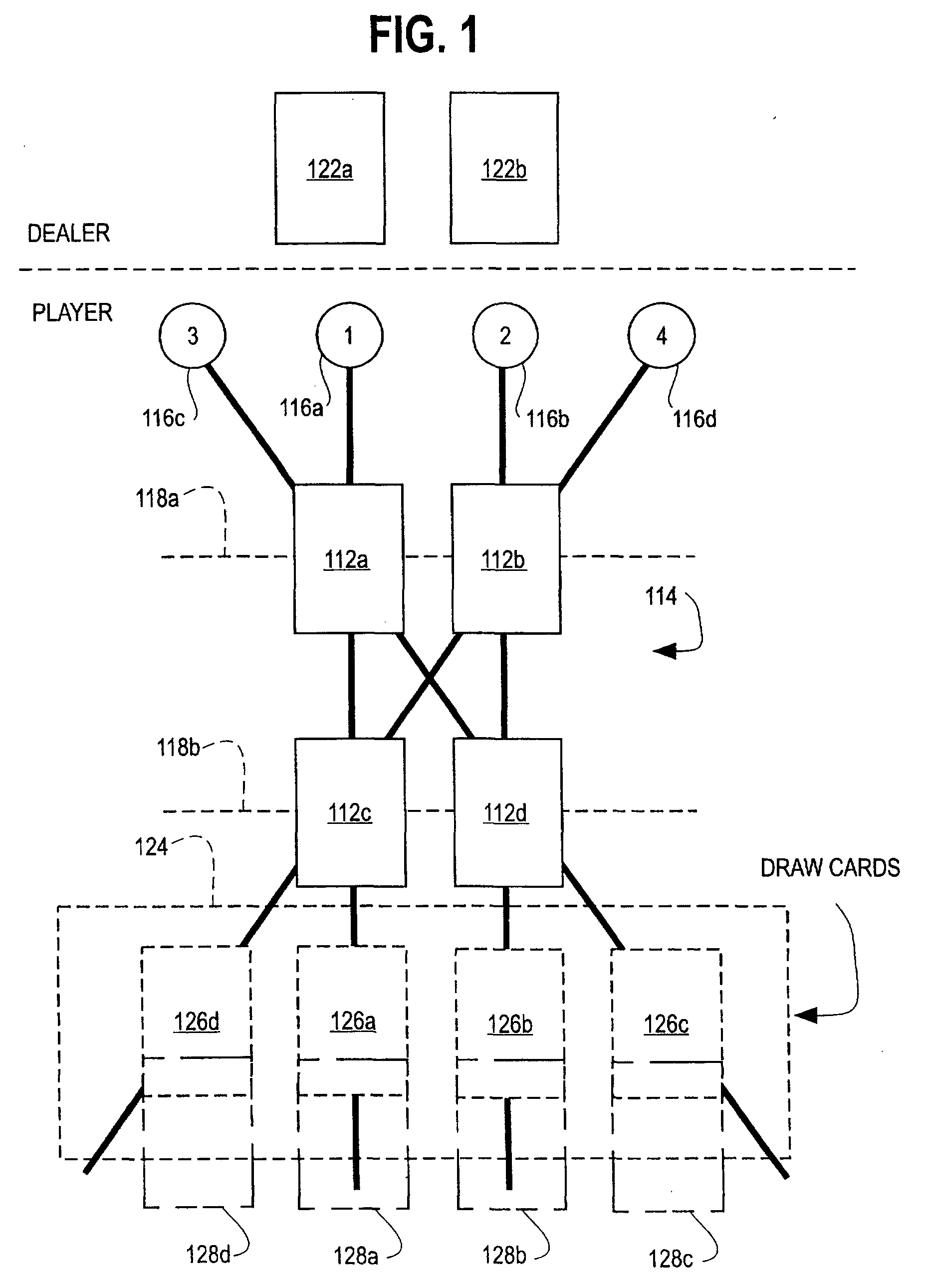 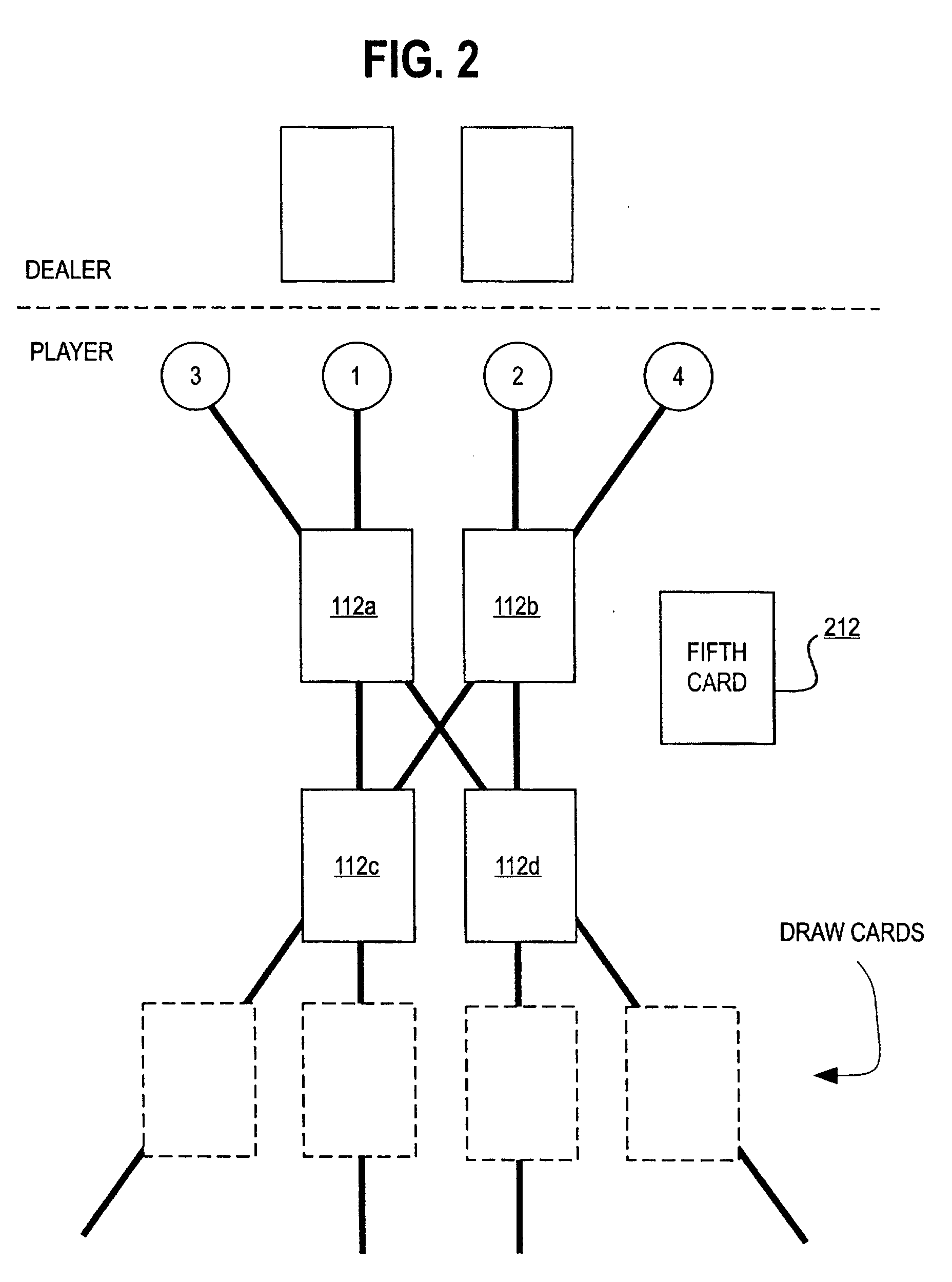 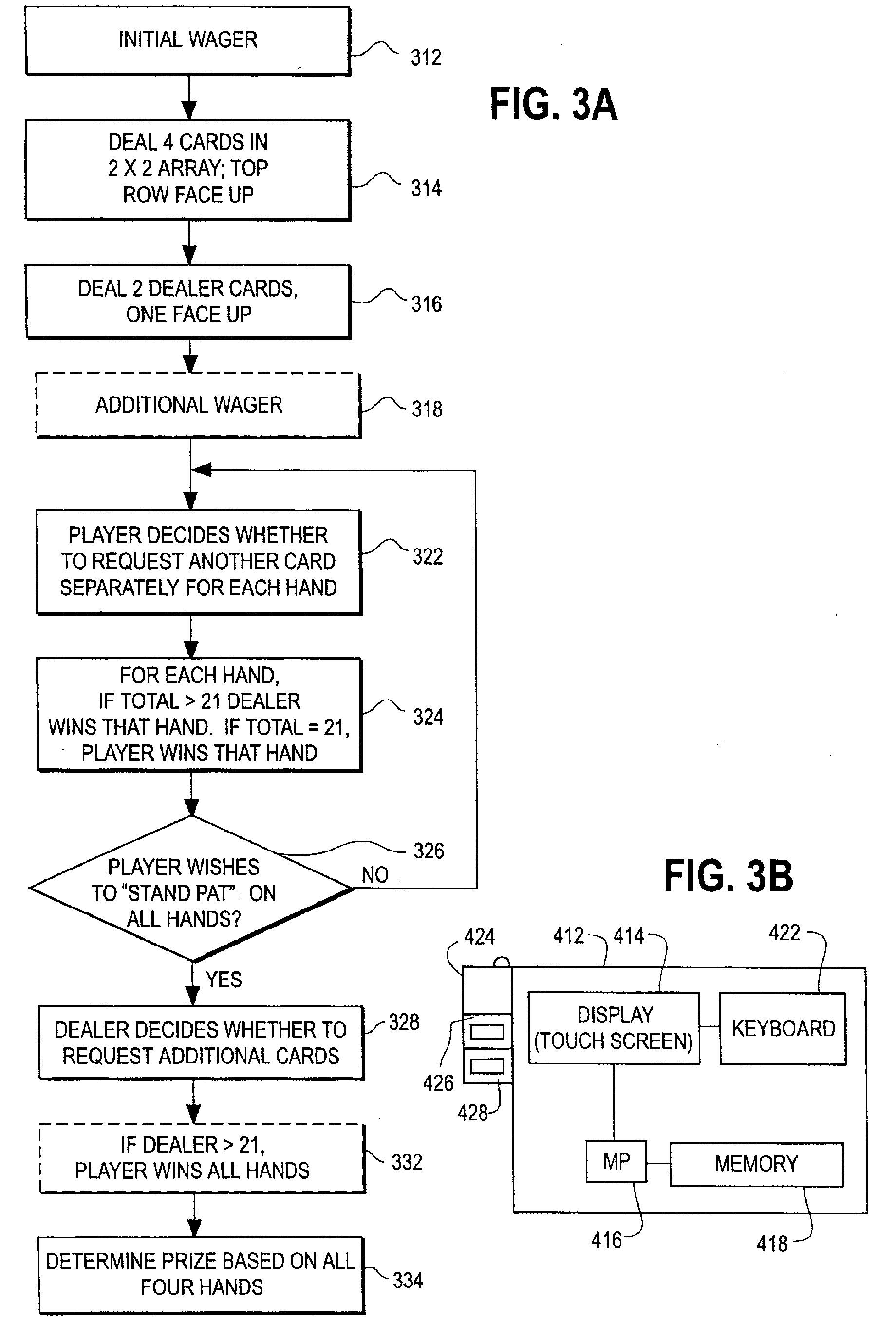