2. Description of the Prior Art

[0002] A centrifuge instrument is a device by which liquid samples may be subjected to a centrifugal force. Swinging bucket centrifuge systems are well known in the centrifuge art. The rotor in such a system is adapted to receive a bucket that hangs from the rotor body. When the rotor is at rest, the bucket hangs in a generally vertical position. When the rotor is accelerated, the bucket swings from its rest position to a horizontal position.
[0003] US 3,938,735 A and US 4,190,196 A relate to so-called fixed angle centrifuge systems not utilizing swinging buckets. Straight tubes having no neck are used for centrifugation. The upper parts of the tubes are sealed by screw means having laterally protruding parts overlapping the upper tube portion.
[0004] WO 94/27879 A1 and WO 92/18390 A1 disclose swinging bucket centrifuge systems utilizing a force transmitting member designed such as to distribute the bending and compressing components of the centrifugal body force generated during centrifugation into the transition portion of the tube containing the sample to be centrifuged. The tube has to be filled with liquid in order that a hydrostatic counter-force can be generated which withstands and opposes the centrifugal body force.
[0005] U.S. Patent No. 5,591,114 to Romanauskas, which is incorporated herein by reference, discloses a swinging bucket centrifuge rotor. The body of the rotor has at least one pair of confronting planar sidewalls that are circumferentially spaced apart to define a generally axially extending slot. Each planar sidewall has a trunnion pin mounted thereon, and the trunnion pins as a pair serve to receive a swinging bucket.
[0006] U.S. Patent No. 5,624,370 to Romanauskas, which is incorporated herein by reference, discloses a bucket for use in a swinging bucket centrifuge rotor. The bucket has a cylindrical body with a pair of planar abutments formed on the body. The abutments are diametrically disposed on the body. A slot is formed between each abutment and a portion of the body of the bucket, and each slot has a groove. The bucket is installed on a rotor by lowering the bucket onto a pair of rotor trunnion pins such that each trunnion pin is received within a groove defined on a respective abutment.
[0007] A container for use in a swinging bucket centrifuge system and made of a rigid material is generally cylindrical in form. However, a swinging bucket can also define a generally rectangular volume within which a flexible or non-cylindrical container can be held. Such an arrangement is commonly used for holding blood bags for centrifugation of blood.
[0008] The centrifugal force that advantageously serves to separate a liquid sample into its constituent parts also acts upon the container that holds the sample. The container must be capable of withstanding this force otherwise it will be disfigured or destroyed. For example, if a blood bag is not substantially full during centrifugation, the unfilled portion of the bag will crease and fold into the remainder of the bag and blood particles can become lodged in a crease. Even in the case of a more rigid container, the structural integrity of the container must be sufficient to ensure that it does not collapse under the stress of centrifugal force.
[0009] In the prior art, the integrity of a container held within a swinging bucket is maintained by either substantially filling the container or by reinforcing the walls of the container. Filling a container is a problem in the case where an operator wishes to work with a sample volume that is less than the amount required to fill the container. On the other hand, reinforcing the walls of a container requires the use of a material that is thicker or stronger than the material used for a non-reinforced container. Consequently, a container with reinforced walls is heavier, less transparent, has a reduced volume capacity and is more expensive than a non-reinforced container. Furthermore, such a container cannot be made by an inexpensive manufacturing process such as blow molding.
[0010] There is a need for a lightweight, inexpensive container assembly that does not collapse when subjected to centrifugal force.
[0011] There is also a need for such a container assembly that accommodates a flexible or non-cylindrical container.

[0012] The invention relates to a centrifuge system as claimed in claim 1. Preferred embodiments are described in the dependent claims.
[0013] In one embodiment of the invention, the member, also denoted as a support bridge, to secure its position has an aperture for securing the lid and a counter bore defining a flange that engages an edge of the lid. A lip formed at either end of the bridge engages a respective edge of a swinging bucket in which the container is disposed during centrifugation.
[0014] It will be noted, as the description of one embodiment herein proceeds, that the container includes a chamber that can have a non-cylindrical form. In an alternate embodiment, the chamber can be a bag.
[0015] It will especially be appreciated by those skilled in the art that the present invention permits the use of a container made of an inexpensive, lightweight material.

Fig. 1 is an exploded top perspective view showing components of a container assembly for use in a centrifuge system in accordance with the present invention;

Fig. 2A is a top plan view of a support bridge in accordance with the present invention;

Fig. 2B is a front elevational view with a vertical section taken along line A-A of Fig. 2A;

Fig. 2C is a vertical section taken along line B-B of Fig. 2A;

Fig. 3A is a top plan view of the container assembly of Fig. 1 shown mounted in a swinging bucket;

Fig. 3C is a vertical sectional view taken along line C-C of Fig. 3B;

Fig. 4 is a horizontal sectional view as would be seen along line C-C of Fig. 3B showing the assembled container assembly of Fig. 1 during a centrifuge operation;

Fig. 5 is a horizontal sectional view as would be seen along line D-D of Fig. 3B; and

Fig. 6 is a vertical sectional view similar to that of Fig. 3C showing an alternate embodiment of the container assembly of the invention. 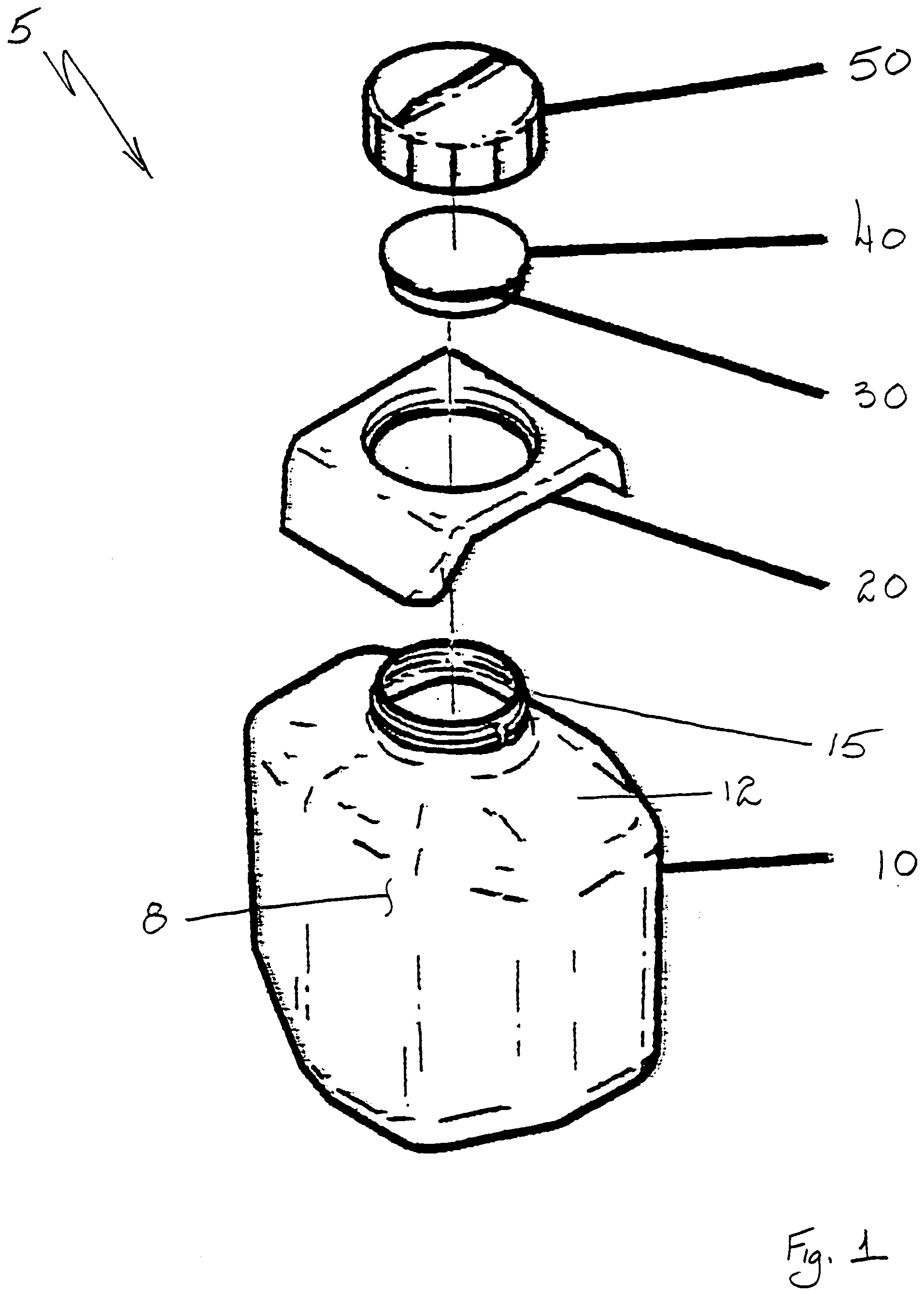 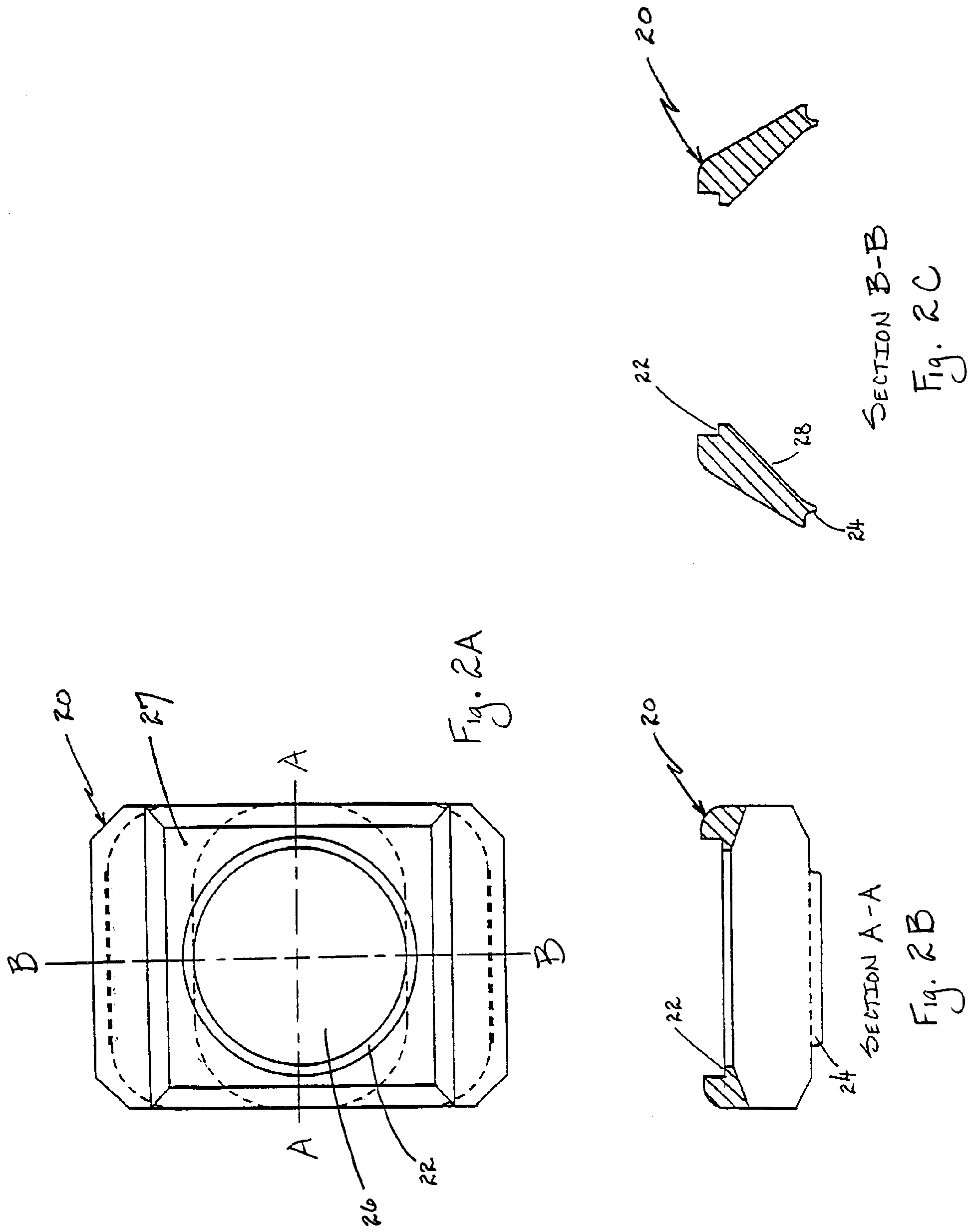 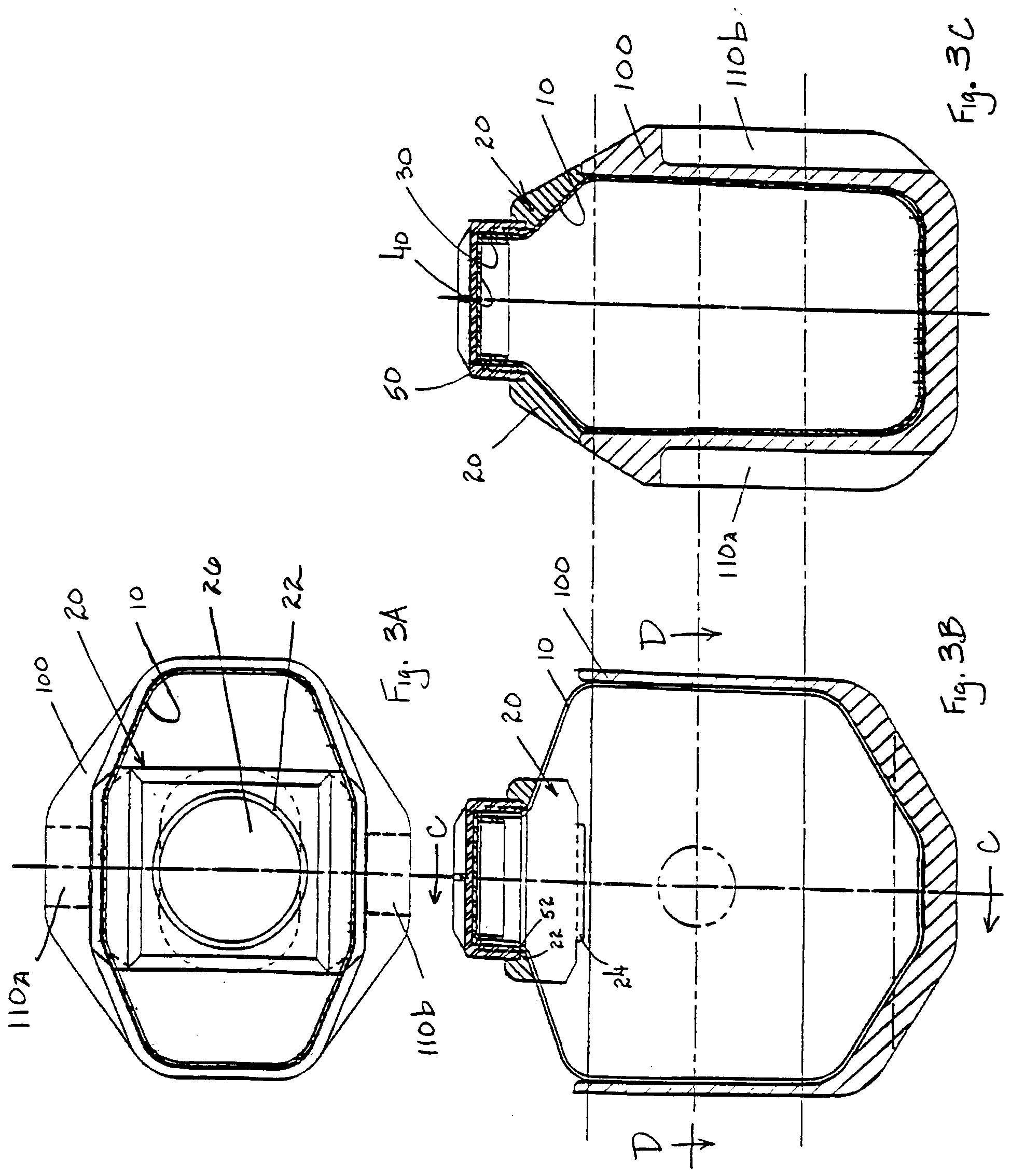 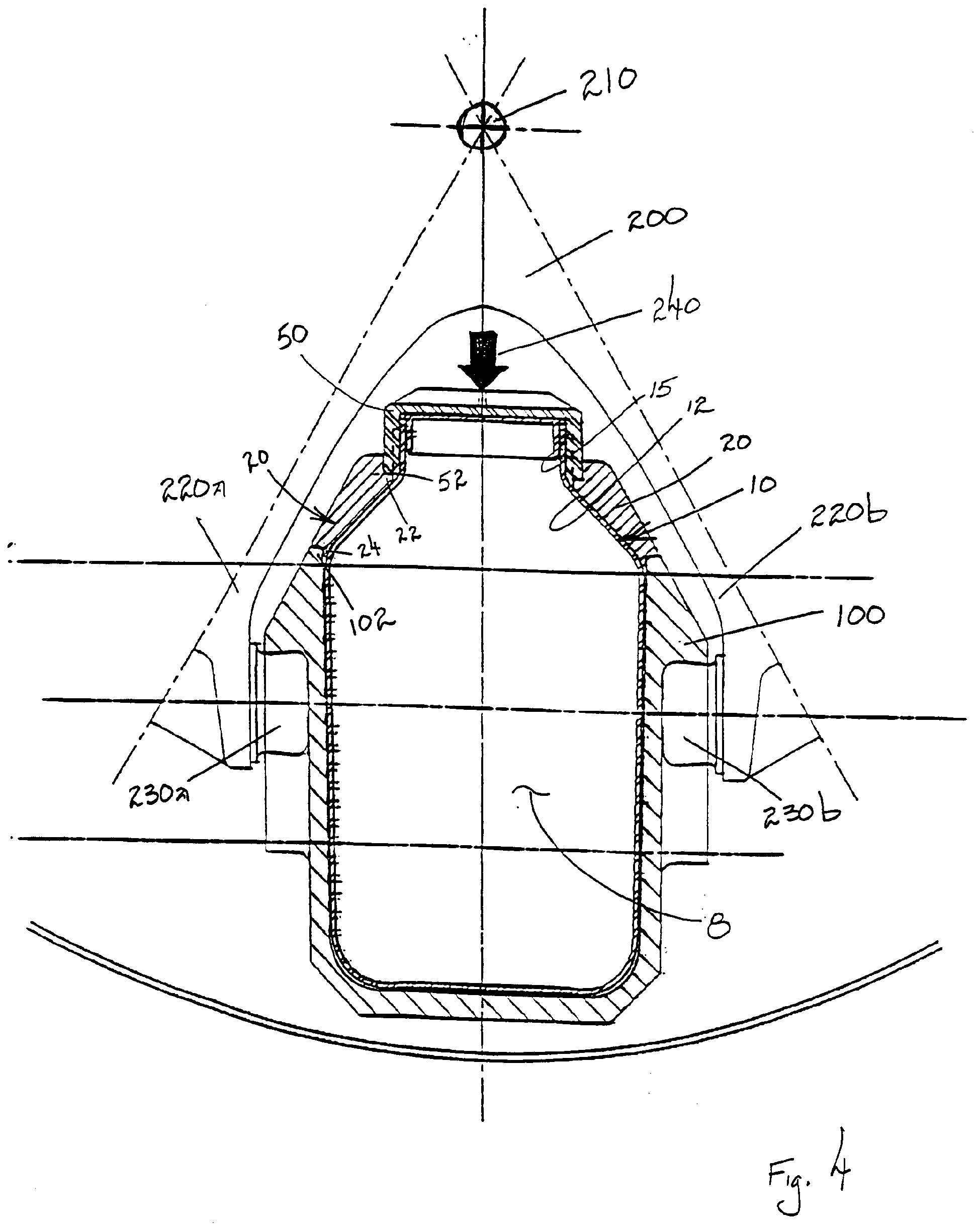 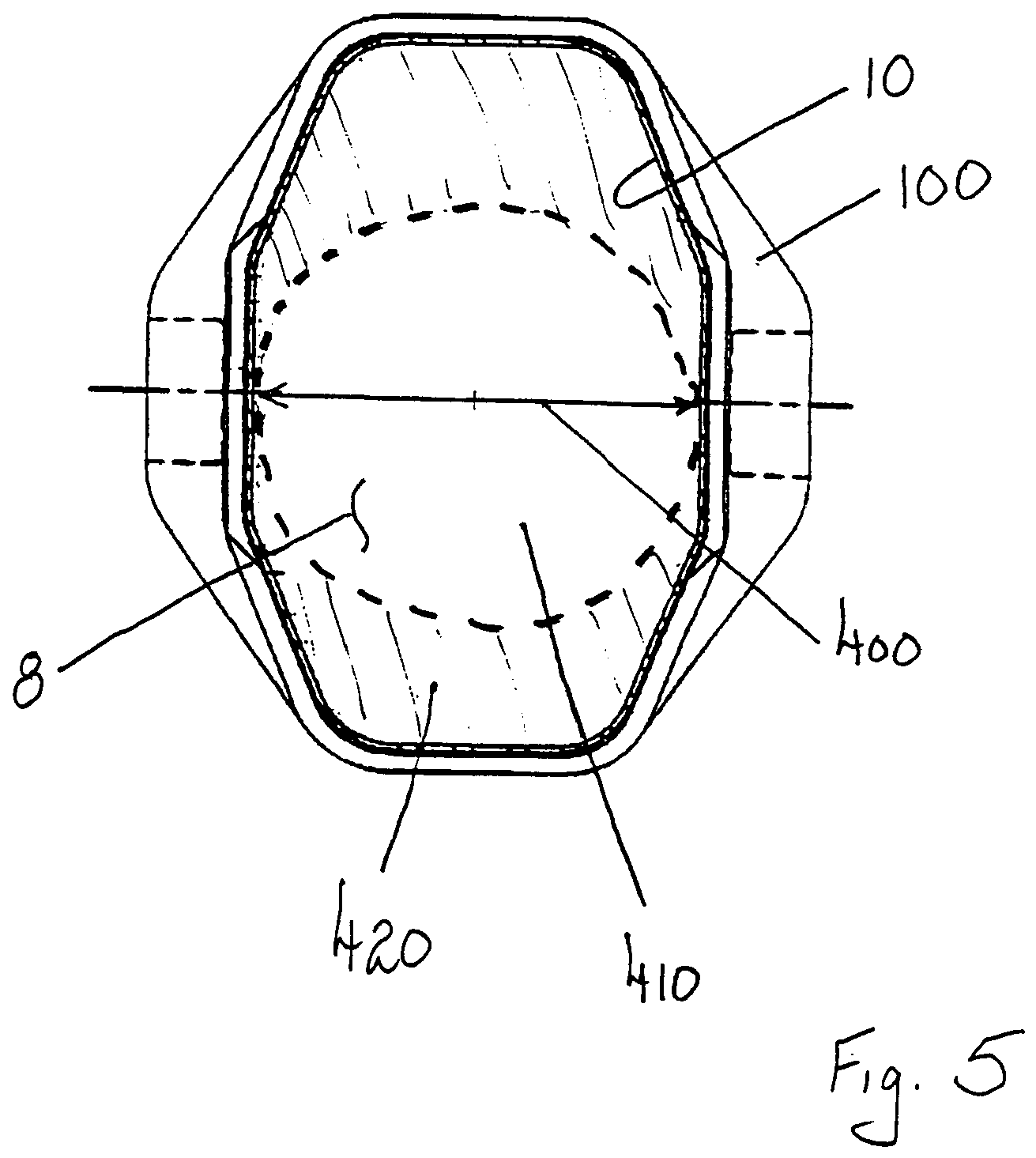 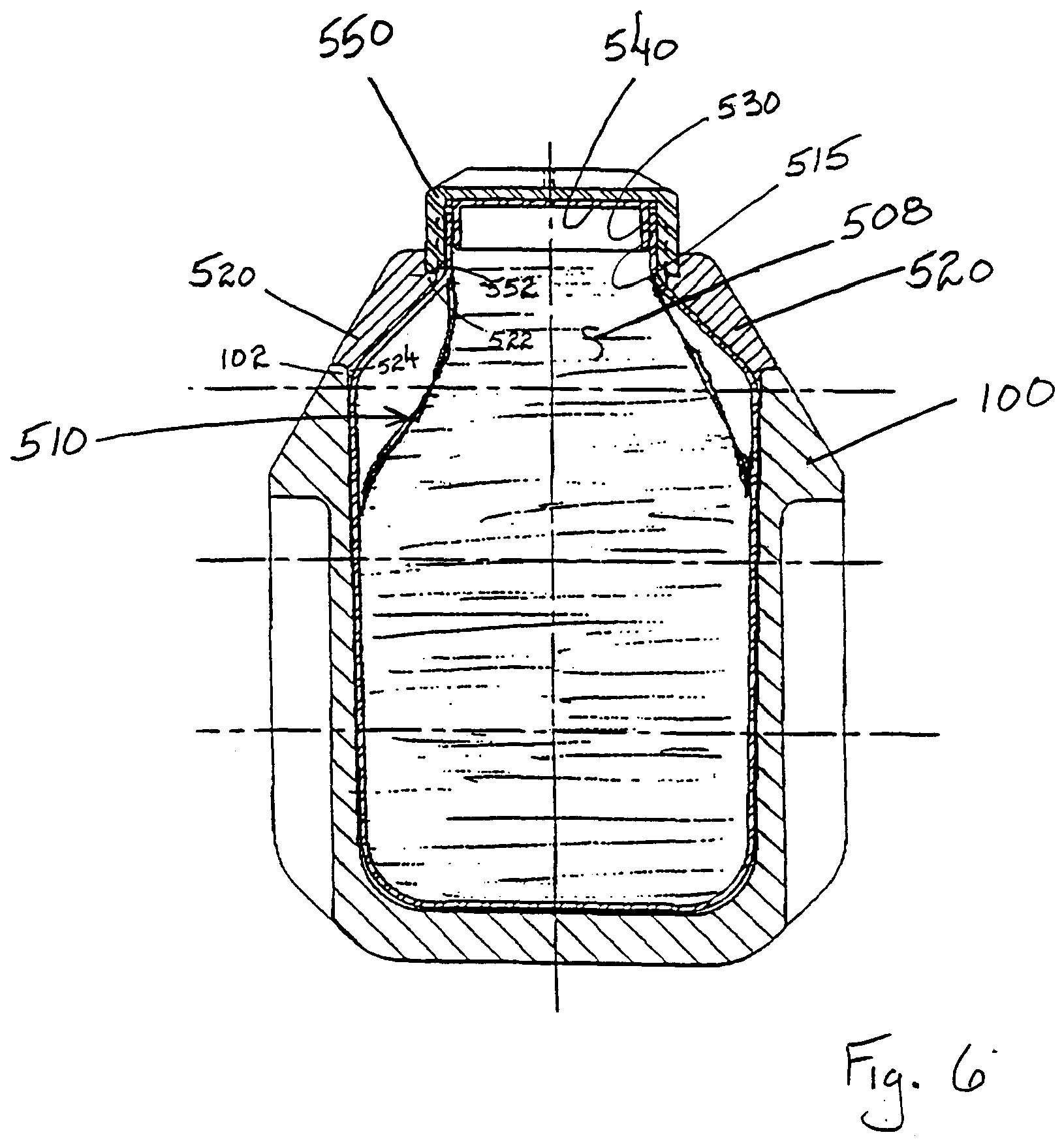