Fig. 1 is a very schematic vertical sectional view of the exemplary embodiment of the catch pit according to the invention.

Figs. 2, 3 and 4 are vertical sectional views of the pump housing of the catch pit according to Fig. 1, showing three different stages thereof when the catch pit is being drained.

[0009] Fig. 1 shows a catch pit which is incorporated in a sewer system, in which sewage water from one or more sources can collect. The catch pit includes a cistern 1, which may be made of concrete, for example, and which will usually be disposed underground. Cistern 1 comprises an inlet 2 for letting in sewage water, which flows into the cistern 1 of the catch pit via a natural drop. Cistern 1 furthermore includes an outlet 3, which is located at a low level in the catch pit and which is led to a higher level via an outlet pipe 4 fitted with an outlet valve 5, and which exits the cistern at said higher level.
[0010] Connected to outlet 3, at the bottom end of outlet pipe which, in addition to pump housing 6, comprises a vacuum pressure pump 7 and one or more connecting hoses 8 between pump 7 and housing 6. As already said before, said housing includes an outlet 9, which is connected to the coupling of outlet 3. Housing 6 furthermore includes an inlet 10, which is in communication with the cistern 1 of the catch pit and which can be closed by means of an inlet valve 11, in this embodiment in the form of a non-return valve, which is mounted in the interior of housing 6 and which closes inlet 10 when the pressure in housing 6 is larger than the pressure in cistern 1. Valve 11 opens automatically when the pressure in cistern 1 is sufficiently higher than the pressure in housing 6. Present in the upper wall of housing 6 is the pump connection 12 to which the connecting hose 8 of pump 7 is connected.
[0011] Pump 7 is housed in a control box 13, which control box 13 is disposed at a higher level than cistern 1, in particular above ground level, so that the interior of the control box 13 is readily accessible from outside. The control box comprises the control units which are required for the functioning of catch pit 1. Thus, a level sensor 15, which is disposed in cistern 1 of the catch pit, is connected to control unit 14, in response to the signals from which sensor the control unit 14 can control pump 7.
[0012] Vacuum pressure pump 7 is so arranged that it can alternately function as a vacuum pump and as a pressure pump, to which end hose 8 is switched between the suction side and the delivery side of the pump. In the suction position, air is drawn from the interior of housing 6, and consequently a sub-atmospheric pressure will be generated in housing 6, which makes it possible for housing 6 to be completely filled with sewage water. In the pressure position, air is pumped into housing 6 via hose 8 for the forced discharge of sewage water from housing 6.
[0013] Figs. 2, 3 and 4 illustrate the operation of the pumping device in the catch pit according to Fig. 1.
[0014] In Fig. 2, pump housing 6 is in the inoperative position.
[0015] When pump connection 12 is connected to the suction side of vacuum pressure pump 7 via connecting hose 8, as shown in Fig. 3, a sub-atmospheric pressure will be generated in housing 6 and non-return valve 11 will open, as a result of which water from cistern 1 of the catch pit will fill the interior of the housing completely or to a large extent. Housing 6 may have partially filled with sewage water previously already, which sewage water had entered the housing due to the water pressure in the pit. Once the housing is filled to a sufficient degree, vacuum pressure pump 7 will be reversed and the connecting hose 8 will be placed in communication with the pressure side of the pump 7, as a result of which air is pumped into housing 6 from the pump 7 and the sewage water that is present in the housing will be placed under pressure. Non-return valve 11 will close, as a result of which inlet 10 will be closed, so that the sewage water cannot flow back to cistern 1. When outlet valve 5 is opened either automatically or in response to a control signal, the sewage water from housing 6 will be forced upwards through outlet pipe 4 via outlet 3, thus exiting cistern 1, from where the sewage water can be further discharged. Pump 1 will continue to operate until housing 6 has been emptied, after which pump housing 6 is ready for a new cycle.
[0016] From the foregoing it will be apparent that the invention provides a liquid reservoir and a pump therefor which are remarkable for their universal applicability, as well as for the simplicity of construction and reliable operation, because the pump is disposed outside cistern 1, so as to enable easy access thereto, in a protected environment, with only the housing being accommodated in the cistern of the pit. The pumping device is very suitable for use in existing catch pits, where it can replace the electromechanical submersible pumps that are used therein. The connections of the housing can be configured such that the existing pump can simply be disconnected and the housing can be fitted instead.
[0017] In addition to being used in catch pits, the invention can also be used in all kinds of other liquid reservoirs for collecting in particular corrosive liquids, such as liquids in the refinery industry, developers and waste water from various production processes.
[0018] The invention is not restricted to the exemplary embodiment as described above and shown in the drawing, which can be varied in several ways without departing from the scope of the invention as defined in the annexed claims. Thus, the pump may be configured as a gas pressure pump only, in which case the housing will be filled as a result of the pressure from the water in cistern 1. Furthermore, the pump may also be mounted on the housing while being disposed outside the cistern. Also further variations are conceivable, of course. 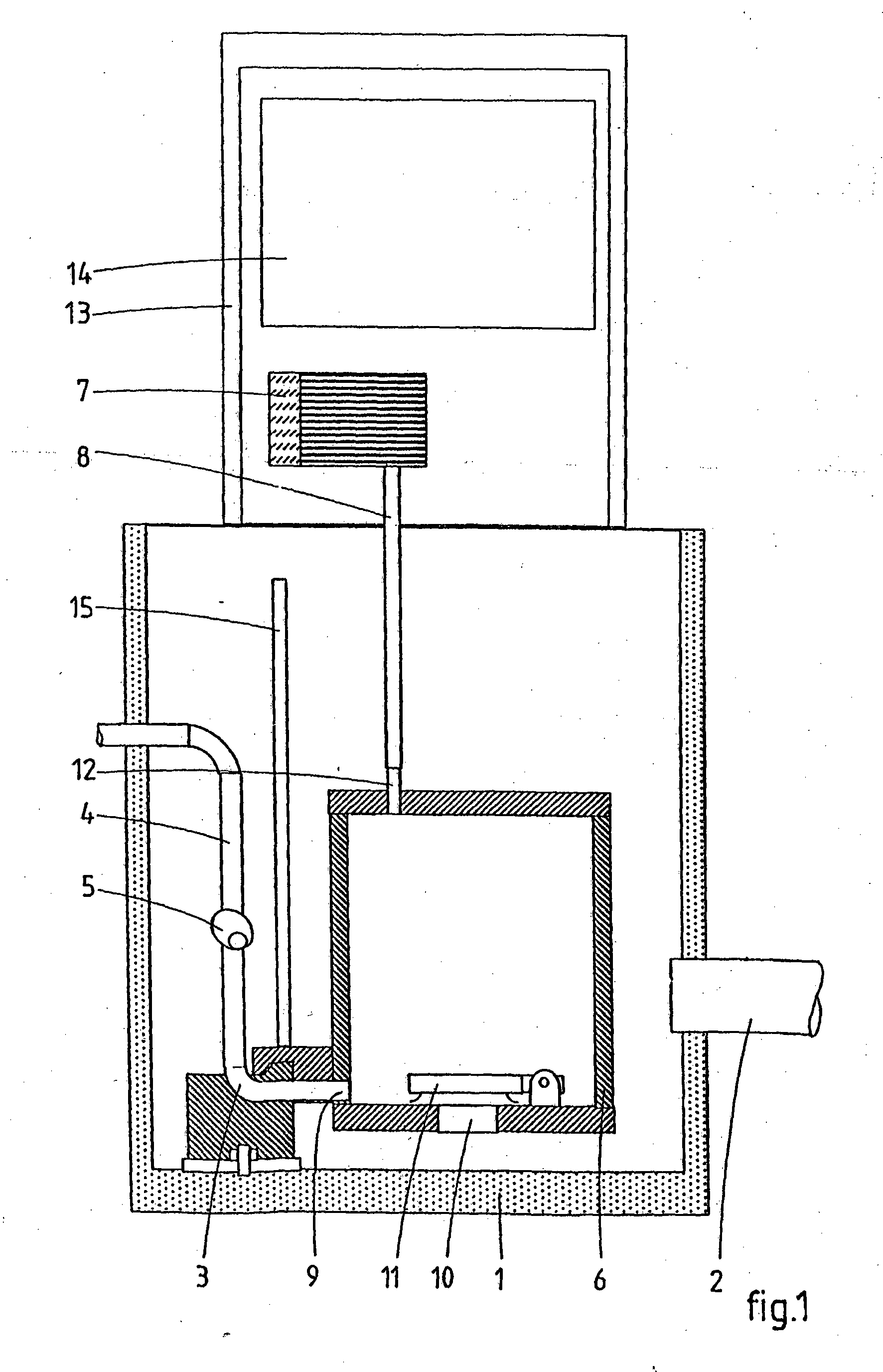 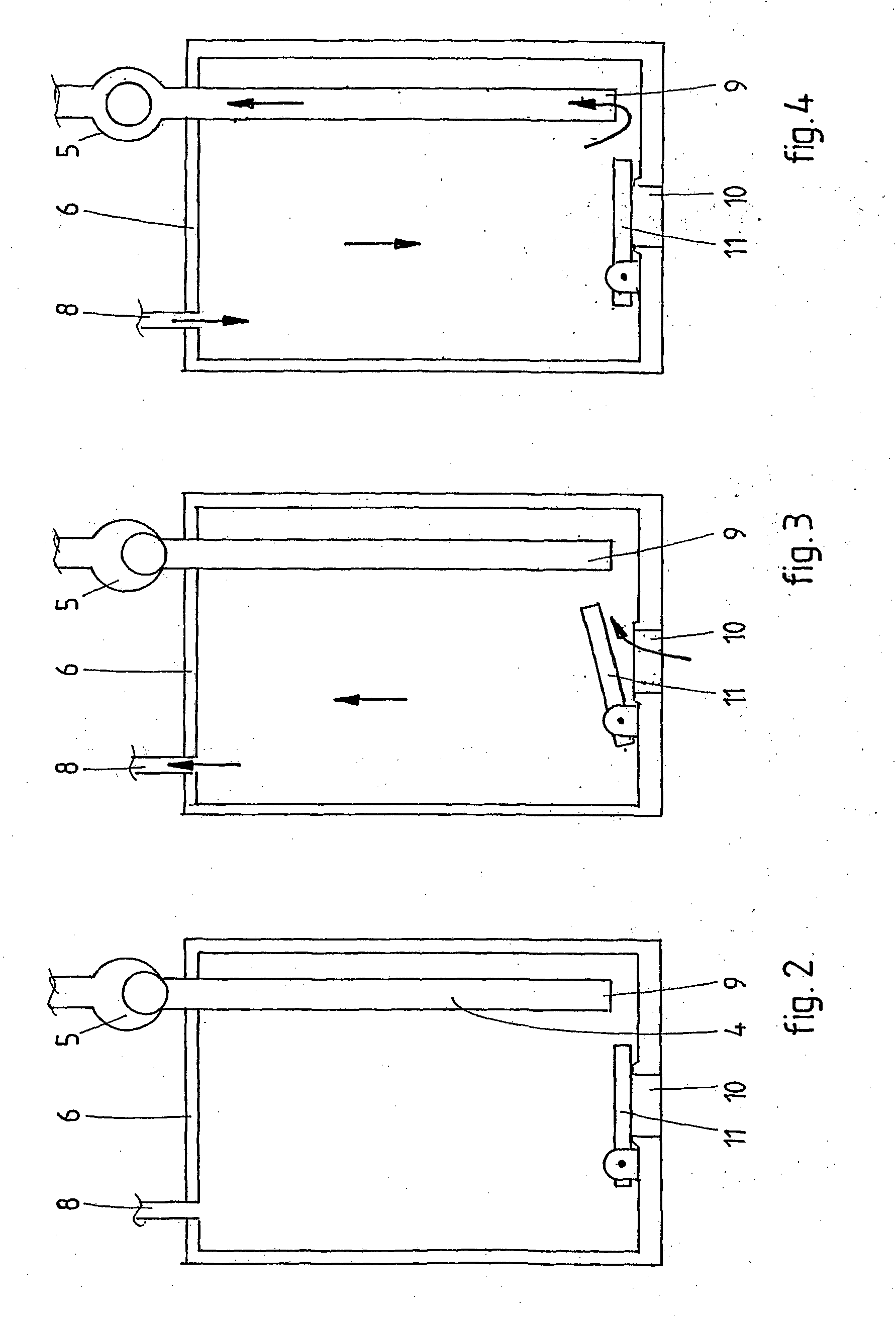