[0002] Numerous semiconductor devices can be fabricated in MOCVD systems using different material systems, with MOCVD systems more recently being used to fabricate Group III nitride based devices. Growth of Group III nitride based semiconductor devices in MOCVD systems is generally described in DenBaars and Keller, Semiconductors and Semimetals, Vol. 50, Academic Press Inc., 1997, p. 11-35. One of the concerns in fabricating Group III nitride devices is the ability to produce uniform materials with minimal impurities in the device layers, while providing sharp interfaces between layers. Impurities and poor interfaces between layers can negatively impact device performance and can prevent consistent reproduction of semiconductor devices.
[0003] Some conventional multi-wafer MOCVD reactors utilize a rotatable susceptor that is mounted at the bottom of the reactor chamber. [See Emcore Discover and Enterprise Series of the TurboDisc Tools, provided by Emcore Inc.]. Semiconductor wafers are held on the top surface of the susceptor and a heating element is arranged below the susceptor to heat the susceptor and the wafers. Reactant growth gasses enter the reactor to deposit the desired materials on the wafer with the susceptor rotating to provide a more uniform deposition of the materials on the wafer.
[0004] One the disadvantages of these conventional MOCVD reactors is that a large and non-uniform boundary layer thickness of hot air can form over the wafers and susceptor as a result of the heating of the susceptor. During growth, heat from the susceptor causes gasses to rise and the boundary layers can extend to the top surface of the reactor chamber. Reactant growth gasses are injected into the reactor chamber, usually through a top inlet. When the lower temperature growth gasses encounter the hot gasses heat convention can occur, which causes turbulence within the reactor. This turbulence can result in non-uniform deposition of materials on the wafer. It is also difficult for the deposition gasses to diffuse through a larger boundary layer and as a result, much of the growth gasses do not deposit on the wafers. This increases the amount,of growth gasses necessary to form the desired semiconductor device.
[0005] A large boundary layer over a susceptor can also limit the susceptor's speed of rotation. As the rotation speed of a heated susceptor is increased, the boundary layer can cause turbulence that adds to the turbulence from the convection forces of the lower temperature growth gasses. This can lead to further non-uniformity in the device layers.
[0006] Another disadvantage of conventional MOCVD reactors is that the growth gasses that do not deposit on the wafers (or susceptor) can deposit on the sidewalls or top surface of the reactor chamber above the susceptor. These deposits can adversely impact the reactor's ability to grow good quality layers. The deposits can react with gasses for subsequent layers and redeposit on the wafers during fabrication. The deposits can be introduced as impurities in the subsequent layers and the deposits can reduce the sharpness between layers. This can ultimately limit the reactor's ability to accurately reproduce the semiconductor devices.
[0007] A metal organic vapor phase epitaxy (MOVPE) system for the growth of Group III-V compound semiconductor materials is described in Aria et al., Highly Uniform Growth on a Low-Pressure MOPVE Multiple Wafer System, Journal of Crystal Growth 170, Pgs. 88-91 (1997). The wafers are held in a susceptor and placed facedown (inverted) in the growth chamber, with the flow gasses flowing under the growth surfaces. The susceptor rotates, thereby rotating the wafers to attain a more uniform growth. Gasses are injected into the chamber from one of the sidewalls of the chamber, through a triple flow channel, and the gas exhaust in on the opposite sidewall. Group V species (hydride gasses) and H2 carrier gas, Group III (organometals) and H2 carrier gas, and purging gas flow into the reactor through the triple flow channel's upper, middle and lower channels, respectively.
[0008] One disadvantage this of system is that because the inlet flow channels are on one chamber side wall and the outlet is on the opposite side wall at about the same height, gas flow is created across the chamber between inlet and outlet. Some of the gasses tend to flow through the chamber without having the opportunity to deposit reactants on the wafers. Also, the leading edges of the wafers experience gasses with the highest concentration of reactants, which results in non-uniform deposition across the wafers.
[0009] The fluid flow and mass transport for "chimney" chemical vapor deposition (CVD) reactors is discussed in Holstein, Modeling of Chimney CVD Reactors, Journal of Crystal Growth 125, Pgs. 311-319 (1992). A chimney reactor has wafers held on heated susceptors (usually two) that are vertically mounted on the interior side walls of the reactor. The intent of the chimney reactor design is to create upward convective gas flow near the susceptor to help promote rapid gas switching for growth of abrupt heterojunctions. A cold carrier gas containing reactants enters at the base of the reactor and flows upward into the heated region.
[0010] One of the disadvantages of this design is that asymmetric flow conditions result in the primary gas flow being located near one side of the reactor and reverse flow near the opposite side. This results in different disposition rates at the two susceptors. Also, with upward gas flow, the growth rate uniformity at the leading edge of the susceptor is much greater than at its trailing edge due to depletion of the reactants.
[0011] Growth of GaAs based semiconductor devices in an MOCVD reactor is also discussed in Lee et al. MOCVD in Inverted Stagnation Point Flow, Journal of Crystal Growth, Pgs 120-127 (1886). The reactor is based on inverted stagnation point flow geometry where the reactants flow up towards wafers clamped to an inverted heated susceptor. However, this reactor is stagnation flow, where the susceptor does not rotate, which can reduce the uniformity of the device layers.
[0012] Patents Abstract of Japan Vol. 016, no. 394 (C-0976), 21 August 1992 & JP 04128379A presents an atmospheric pressure CVD device having discharge pipes through the sidewall of its reaction chamber.

[0013] The present invention seeks to provide an improved method and apparatus for the fabrication of semiconductor devices, and in particular the fabrication of semiconductor devices in MOCVD reactors. According to an aspect of the invention, there is provided a semiconductor fabrication reactor according to claim 1.
[0014] The growth
gasses can also more easily penetrate the boundary layer and the susceptor can be rotated at a higher rotation rate. This arrangement also helps reduce the level of impurities in the semiconductor material that are introduced from deposits within the reactor chamber.
[0015] These and other further features and advantages of the invention will be apparent to those skilled in the art from the following detailed description, taken together with the accompanying drawings, in which:

FIG. 1 is a simplified schematic of an embodiment of an MOCVD semiconductor fabrication system according to the present invention;

FIG. 2 is a sectional view of one embodiment of a reactor according to the present invention;

FIG. 3 is a sectional view of another embodiment of a reactor according to the present invention having a central rotation rod gas inlet;

FIG. 4 is a below perspective view of an embodiment of a susceptor according to the present invention that can be used in the reactor in FIG. 3;

FIG. 5 is a sectional view of another embodiment of a reactor according to the present invention having a central bottom gas inlet;

FIG. 6 is a sectional view of another embodiment of a reactor according to the present invention having bottom showerhead gas inlet;

FIG. 7 is a sectional view of another embodiment of a reactor according to the present invention having sidewall gas inlet; and

FIG. 8 is a sectional view of another embodiment of a reactor according to the present invention having a height adjustable susceptor.

and characterised in that said susceptor (64) can be moved up and down to vary the distance between said inlet (124, 144, 175) and said susceptor.

6. The reactor of claim 1, wherein said chamber gas inlet (154) is through a sidewall of said reactor chamber (62). 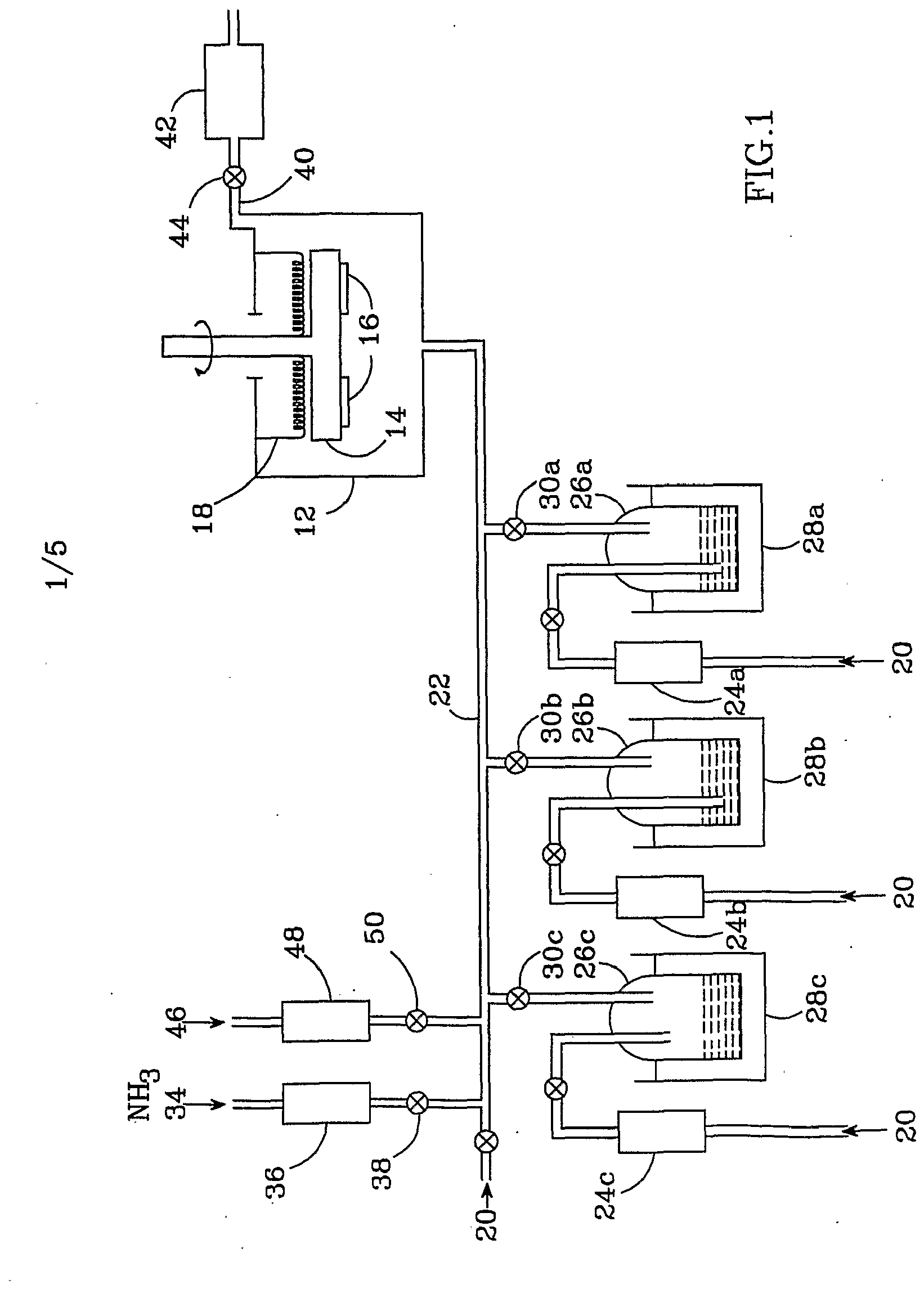 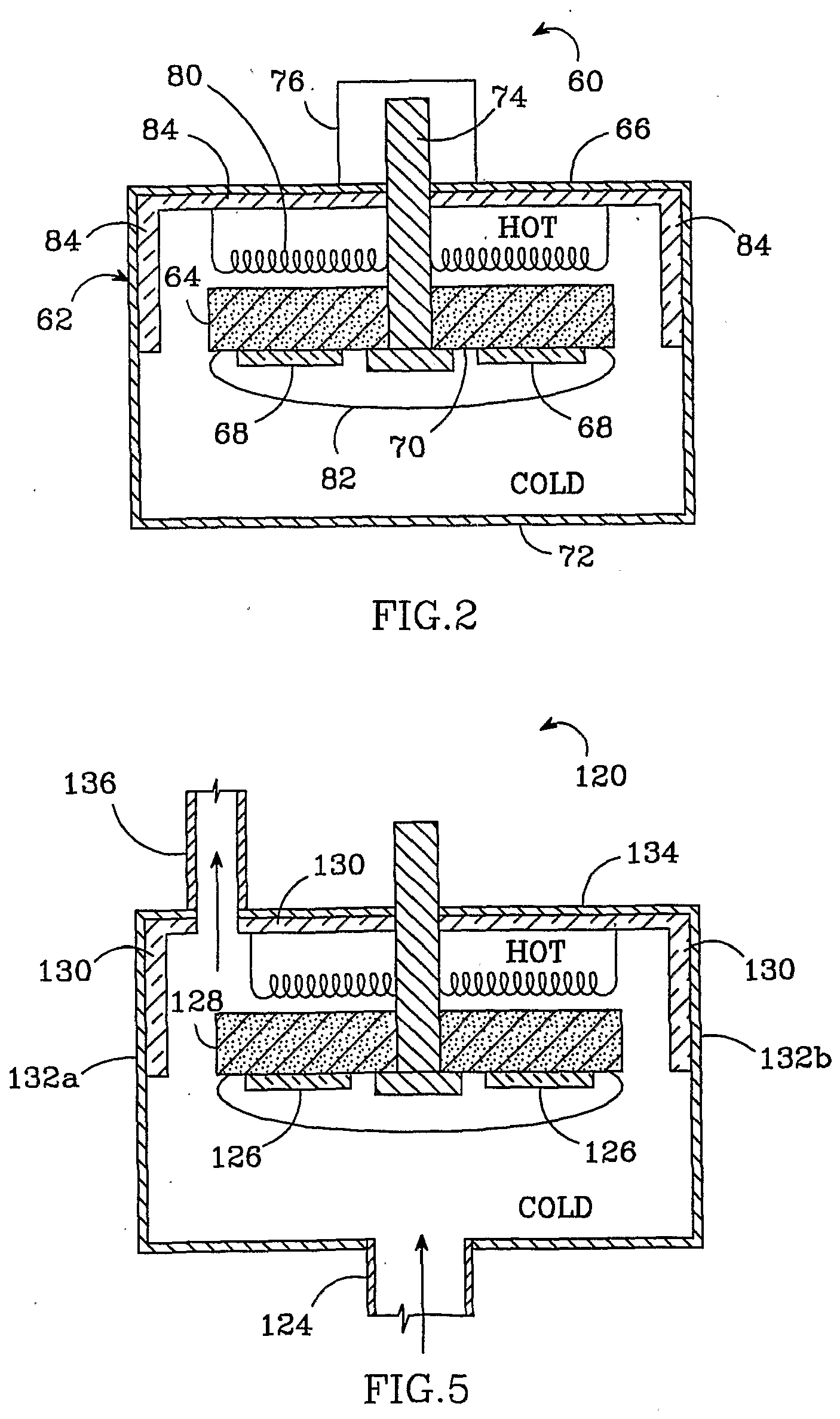 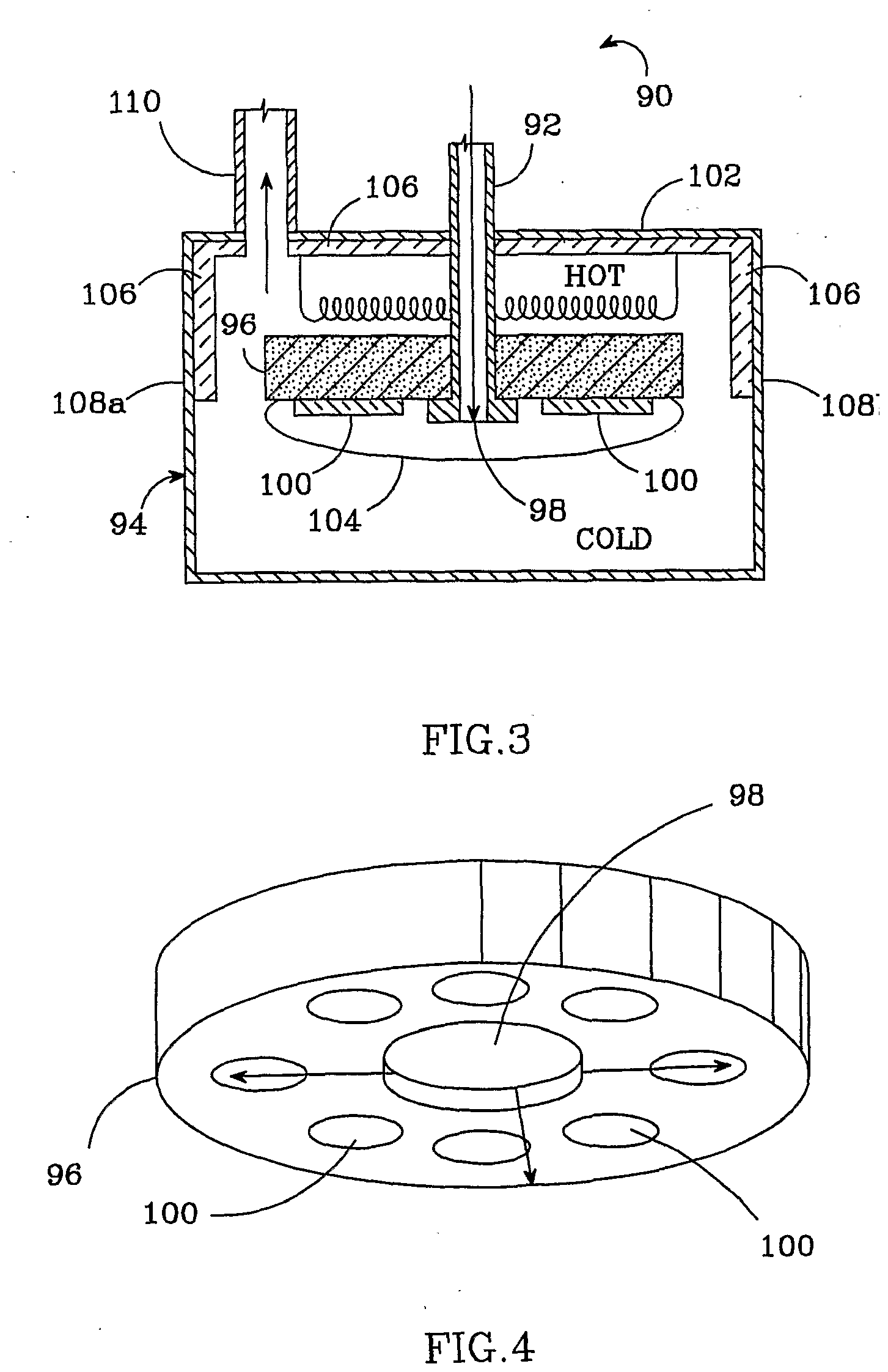 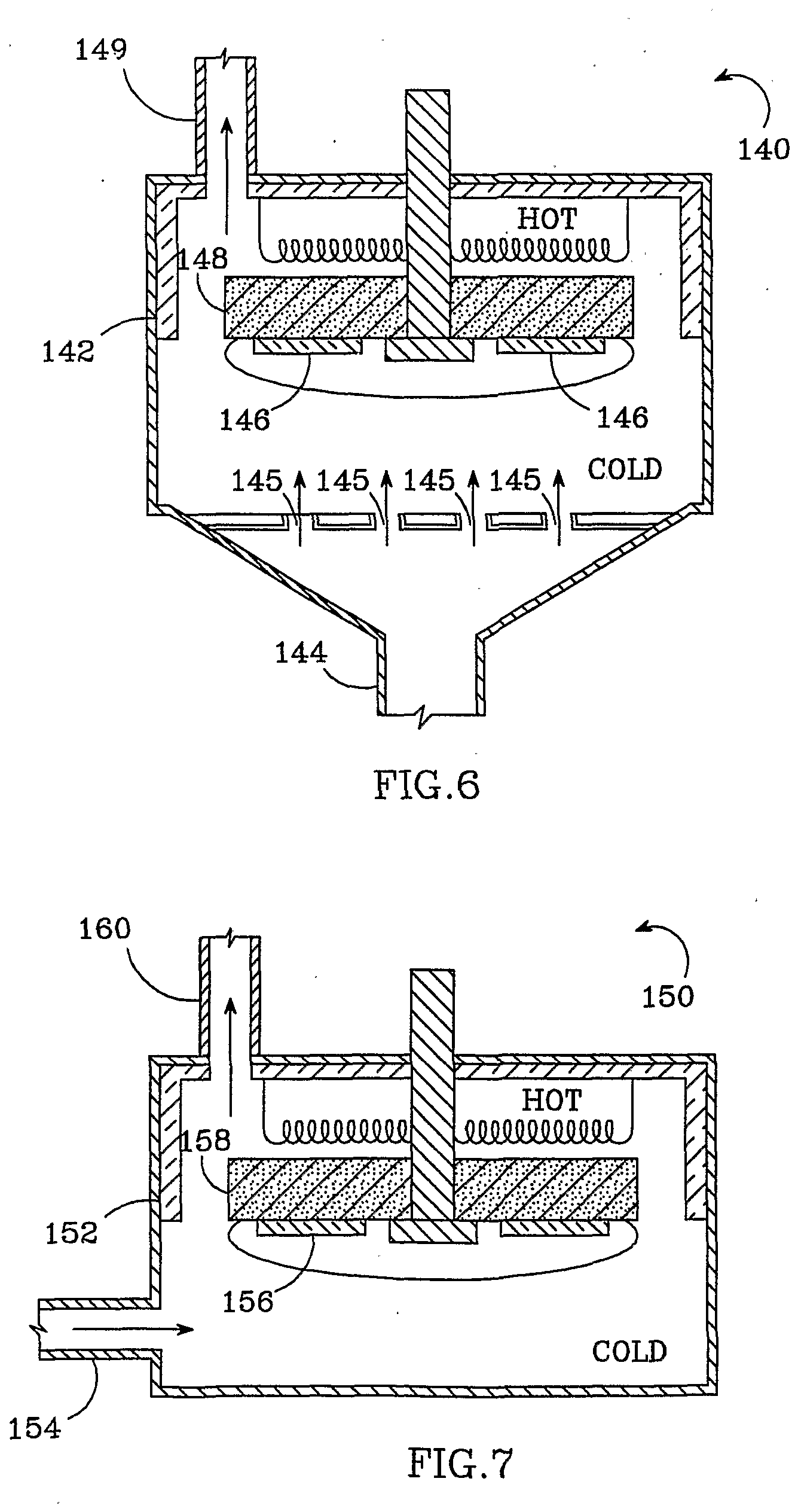 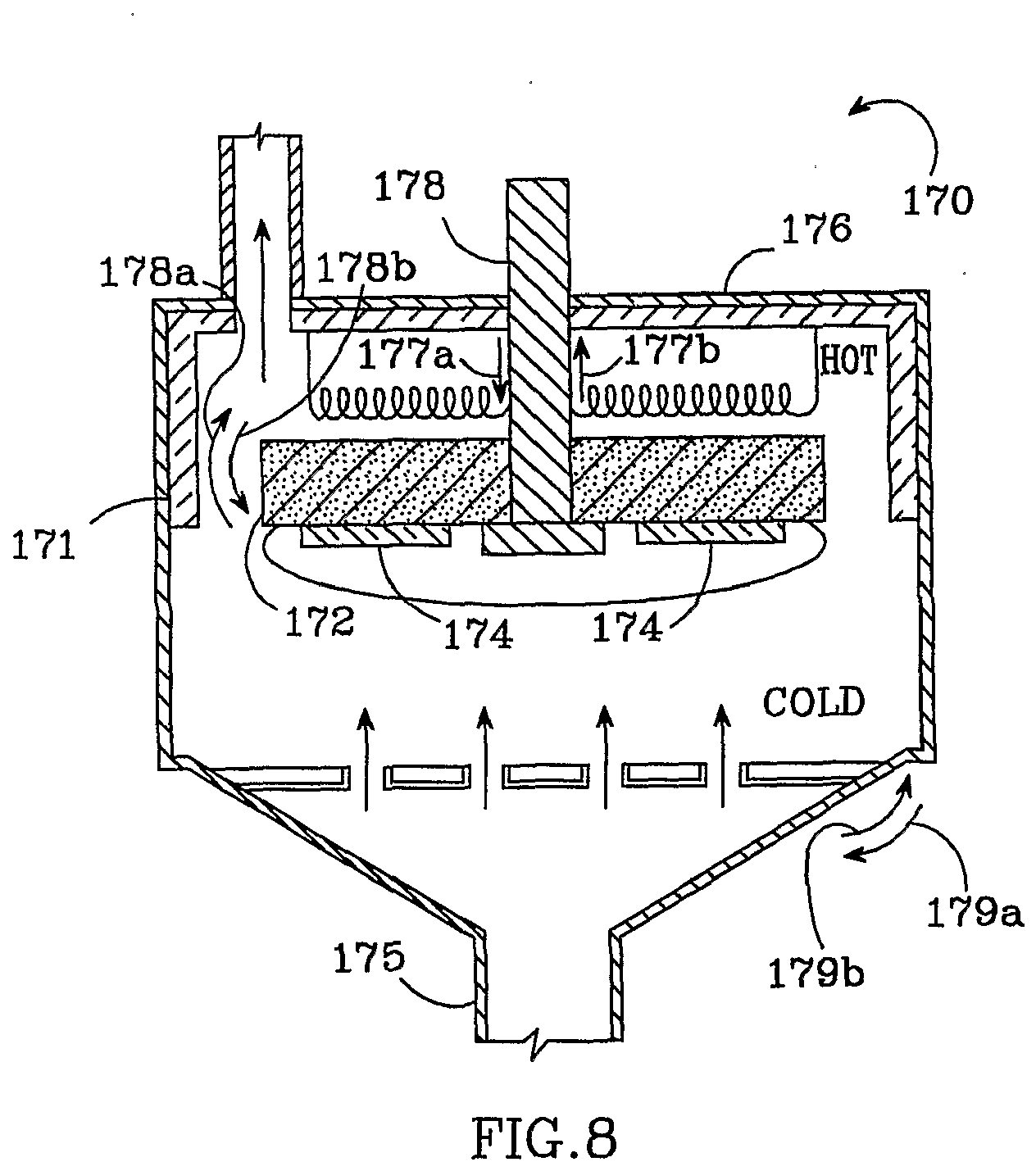