1. The Field of the Invention

[0002] The present invention relates generally to vehicular traffic monitoring systems, and more particularly relates to sensors for detecting the presence, location, speed, direction of travel, volume, and occupancy of vehicular traffic on a roadway.

[0052] Thus, if one input signal is 10.5GHz and a second is 10.50001 GHz then the output signal from the mixer will be the sum of the sinusoids at 21.00001 GHz and another at 10KHz for the present exemplary implementation, the resulting difference frequency signal is employed for evaluation of the signal characteristics.
[0053] It should be appreciated that the utilization of the difference frequency is a result of ranging capabilities of a linearly sweeping transmitted frequency. For example, the present embodiment utilizes a signal transmitted that is linearly frequency modulated (e.g. chirp). If the transmitted signal is reflected by a single point source target and is received by the radar and mixed with the same linearly modulated signal, the received signal, which has been delayed in time by the propagation duration to and from the target results in a frequency difference between the two inputs to the mixer since the transmitted signal exhibits a constantly increasing frequency during the phase of the period under evaluation. Therefore, the longer the propagation time to and from the target in question, the larger the frequency difference between the presently transmitted and the received signal. For example, in the present illustration, the linearly increasing frequency increases at a rate of 50MHz in 1.25 milliseconds. Such a linear change in frequency results in a 40GHz per second change in frequency. Therefore, if a target is located at a distance of 100 feet, the propagation time to and from the target is approximately 203 nanoseconds. In that length of time, the transmit frequency would have changed by 8.13KHz.
[0054] Received portion 604 is further comprised of a low pass filter 664 which eliminates undesired RF signals from the mixer output, therefore resulting in audio frequencies being present at signal 666. Therefore, signal 666, which is the output of the low pass filter 664, is an audio frequency signal whose frequency corresponds to the range of the target and whose amplitude corresponds to the reflectiveness of the target.
[0055] Receiver portion 604 further includes audio filtering and amplification as illustrated in block 668. Such filtering and amplification conditions the signal prior to digitization to reduce any feed-through from the transmitting antenna directly coupling to the receiving antenna. Signal conditioning in the form of high pass filtering is employed since transmitter coupling appears in the received signal as a low frequency.
[0056] The following digital circuitry components may reside on a separate digital board. The output condition signal 670 is input to analog-to-digital conversion for 672, which converts the audio frequency signal to a digital signals for processing and analysis. The digitized output signal 674 is thereafter processed by detection algorithm 676, which performs spectral analysis on the digitized signal 674 and generates the desired traffic statistics for use in traffic analysis, control, and forecasting. Other processing within detection algorithm 676 include automatic and continuous background estimation, automatic and continuous lane allocation and automatic and continuous detection threshold determination.
[0057] Figure 9 illustrates a typical layout of the RF component side of the RF circuit board, in accordance with the preferred embodiment of the present invention. As discussed, RF components 522 (Figure 5) are populated on side 524. The transmit portion 602 and receive portion 604 are depicted, absent antennas 570 and 572 which populate the other side of the board. The conductor backed dielectric substrates704 and 702 for the antenna structures are depicted in Figure 9. Also depicted in Figure 9 are the signal via to the transmit antenna 704 and the signal via from the receive antenna 706.
[0058] The present invention may be embodied in other specific forms without departing from its spirit or essential characteristics. The described embodiments are to be considered in all respects only as illustrative and not restrictive. The scope of the invention is, therefore, indicated by the appended claims rather than by the foregoing description. All changes which come within the meaning and range of equivalency of the claims are to be embraced within their scope.

1. A sensor (500) for monitoring vehicles on a roadway comprising:

a. a direct digital synthesizer (606) for generating a low frequency waveform for a transmitter (644) of said sensor. '

5. The sensor, as recited in claim 1, further comprising:

6. The sensor of claim 5, wherein the RF absorber (550) incorporates cutouts extending partially into the RF absorber that provide clearance around the radio frequency components.

7. The sensor (500), as recited in claim 1, further comprising a housing (502) for enclosing said radio frequency circuit board and said at least one signal processing board therein.

10. The sensor (500) as claimed in any preceding claim, wherein the radio frequency circuit board (520) includes:

a. a direct digital synthesizer (606) for generating a low frequency waveform for said transmitter of said sensor;

b. an oscillator for generating an RF tone; and

c. a frequency mixer (802) for mixing said modulated signal and said RF tone to form a signal comprised of sum and difference frequencies.

a. a direct digital to analog converter (822) for directly generating a modulated signal at RF frequencies.

16. The sensor as recited in claim 15, wherein said planar antenna comprises at least a pair (596, 597) of said tapered arrays. 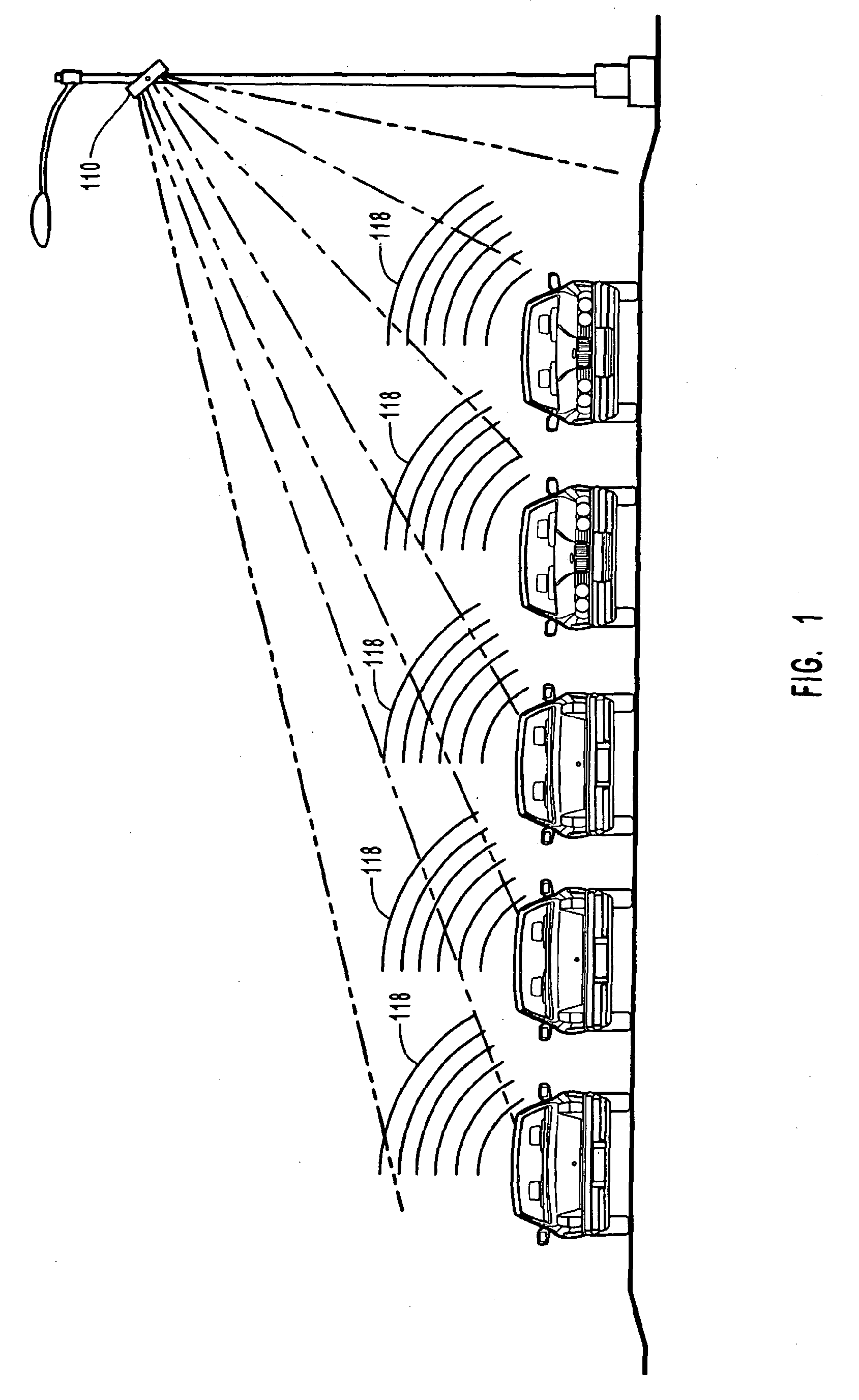 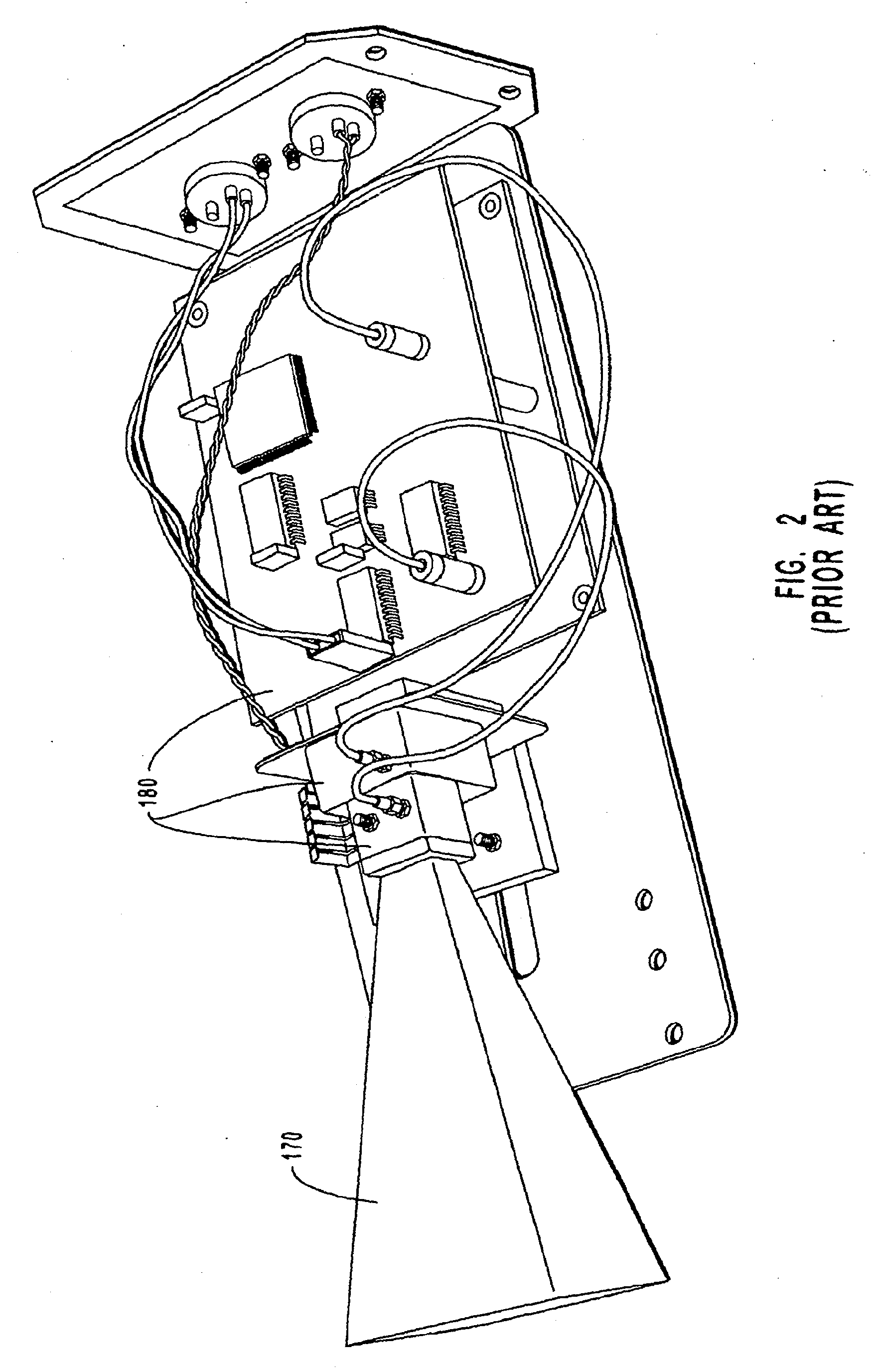 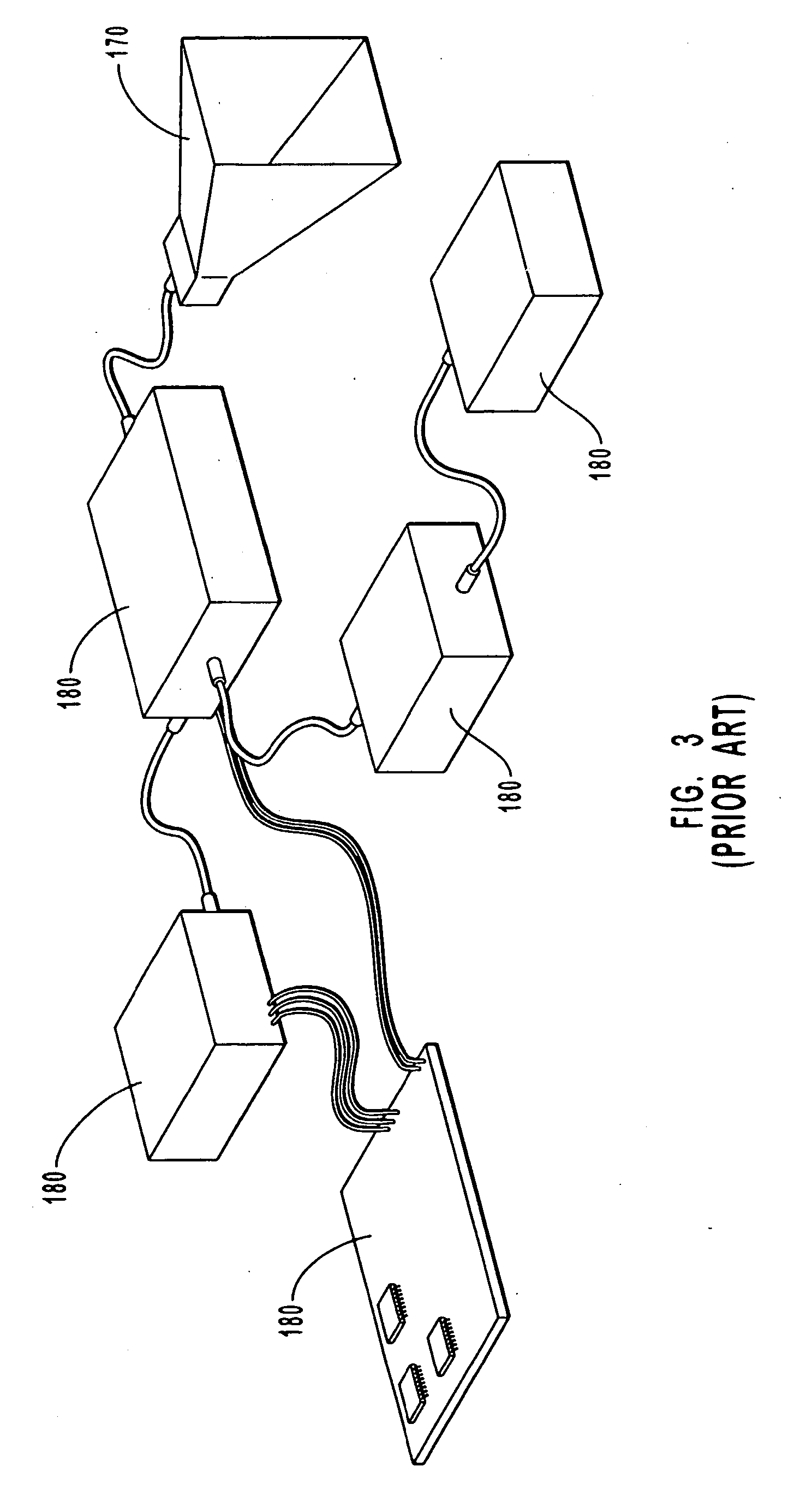 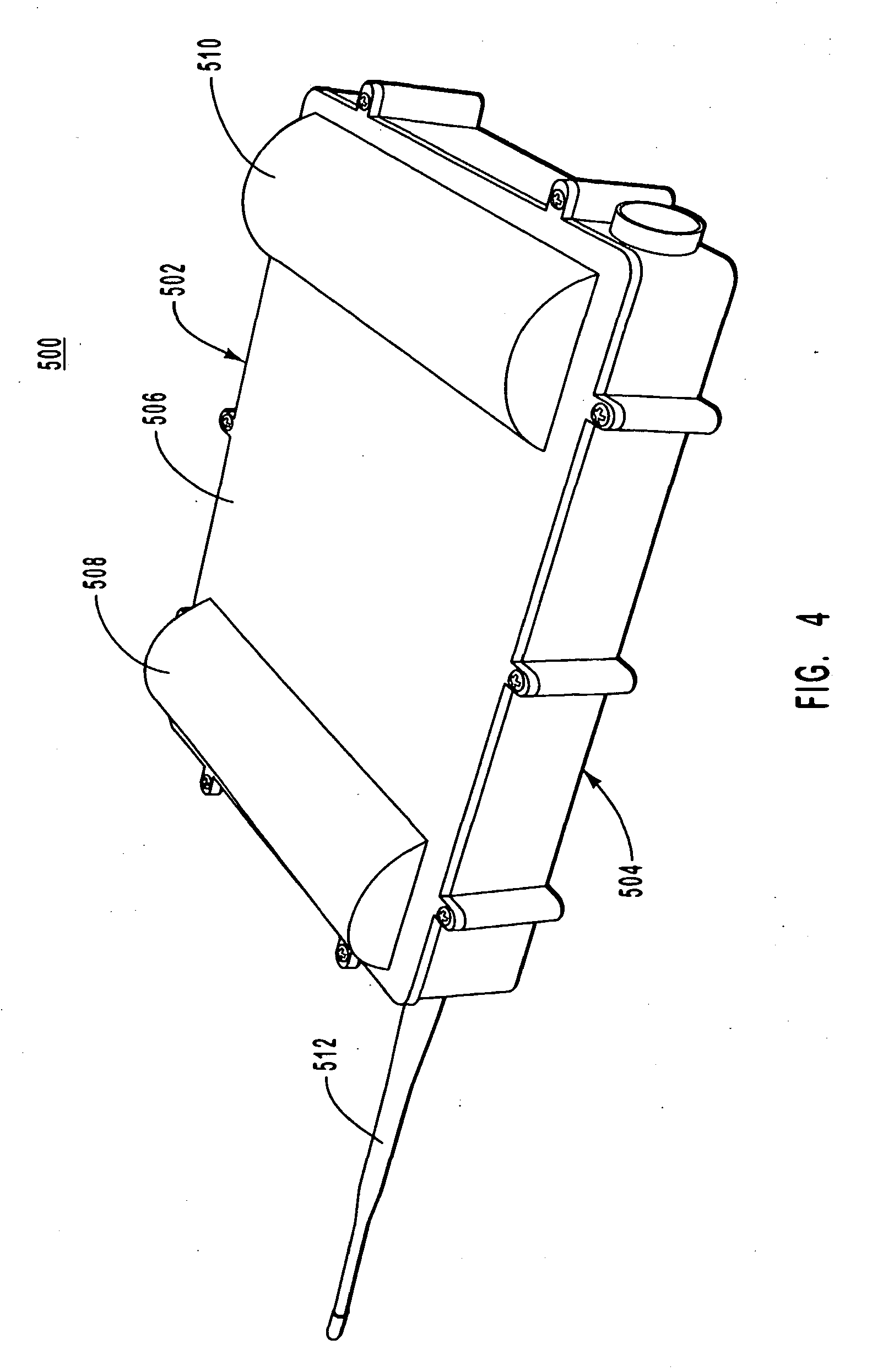 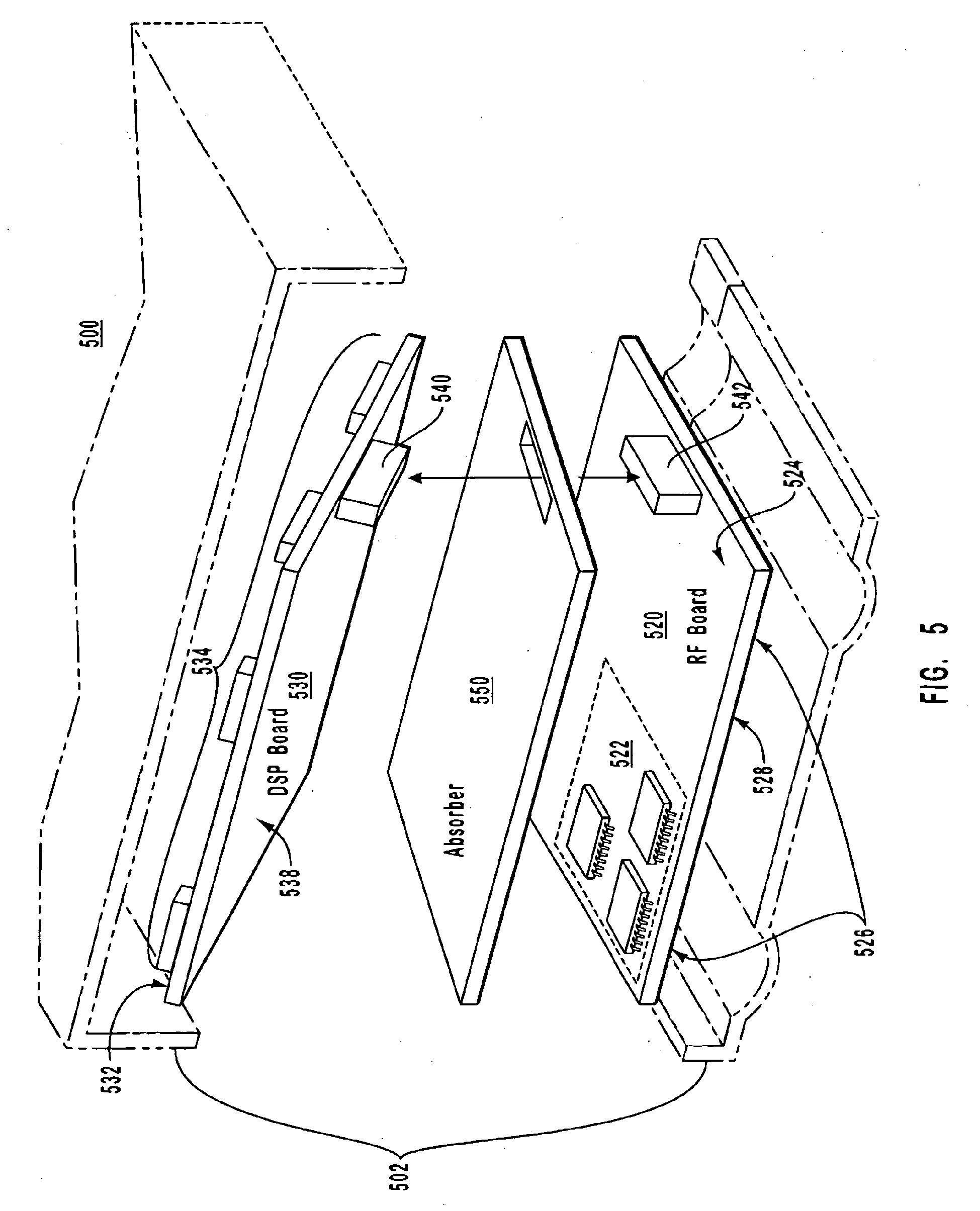 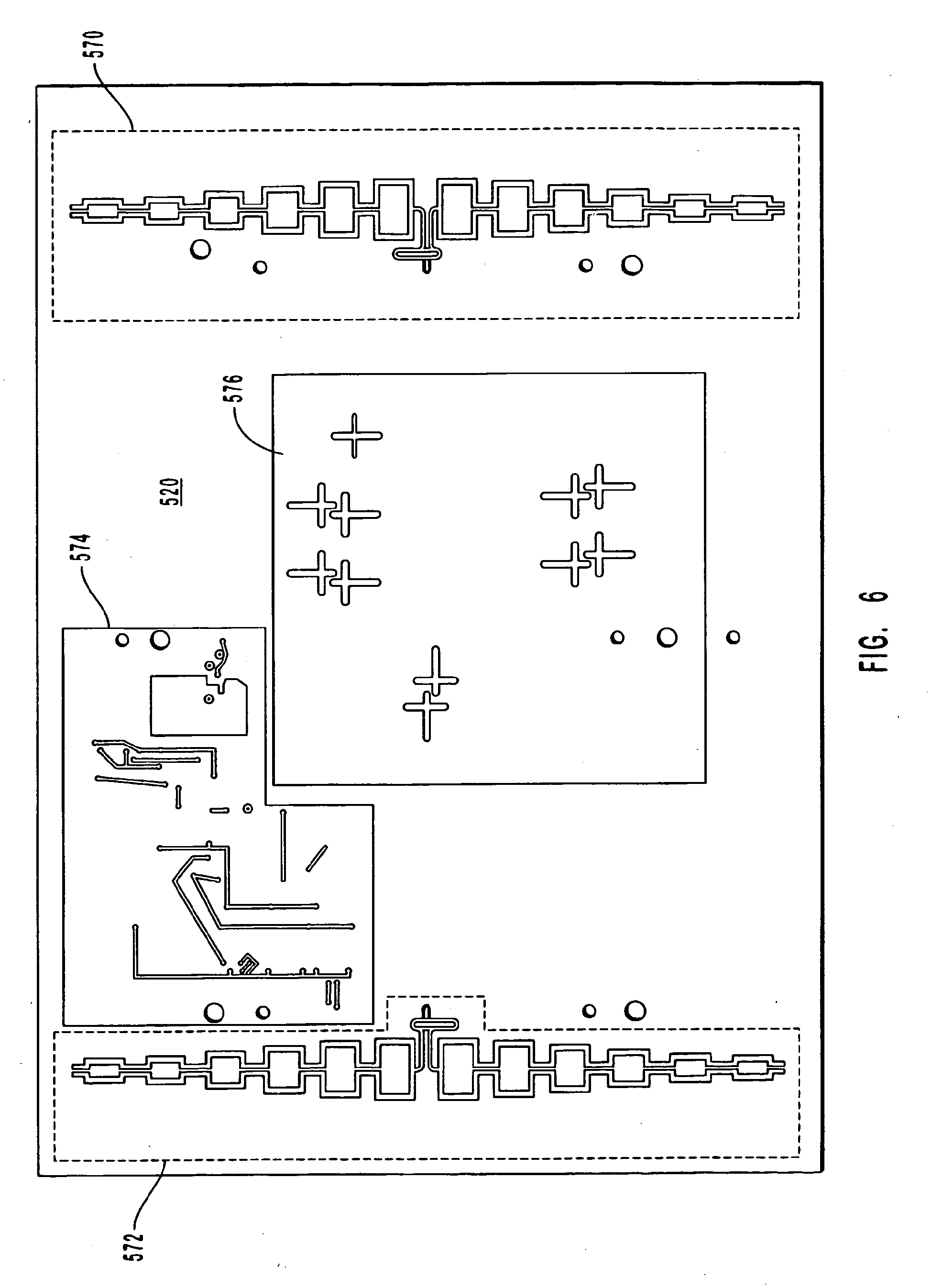 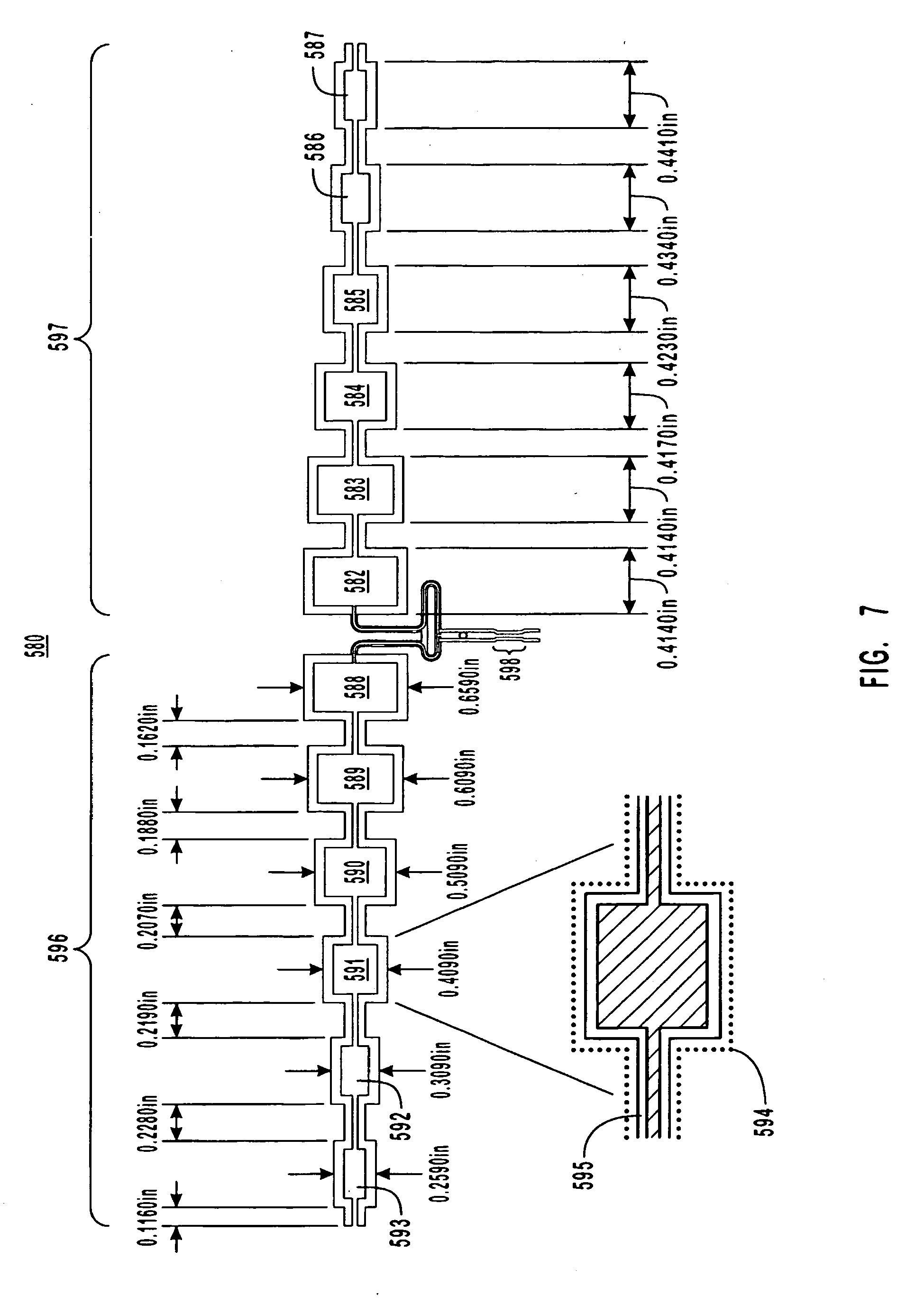 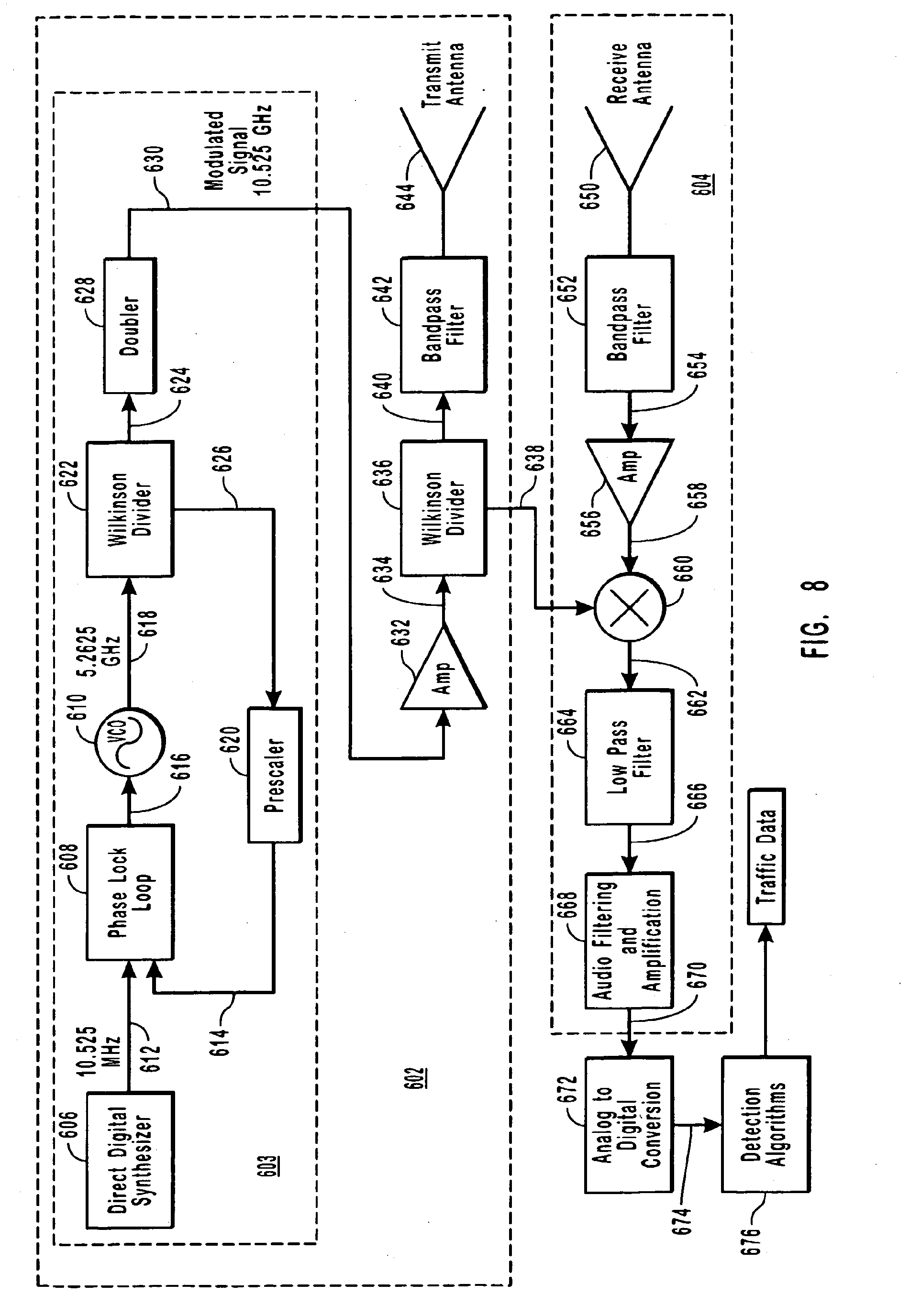 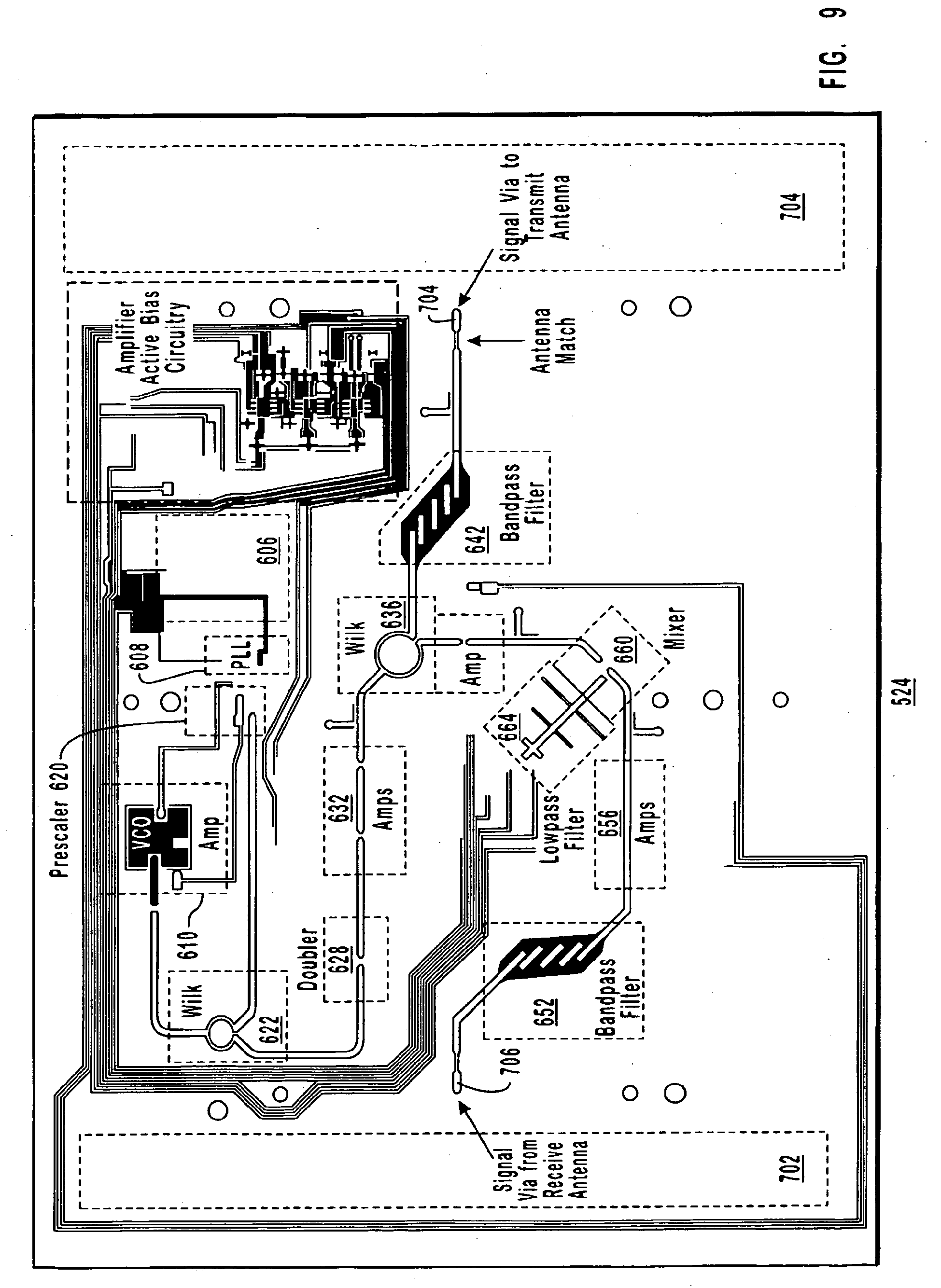 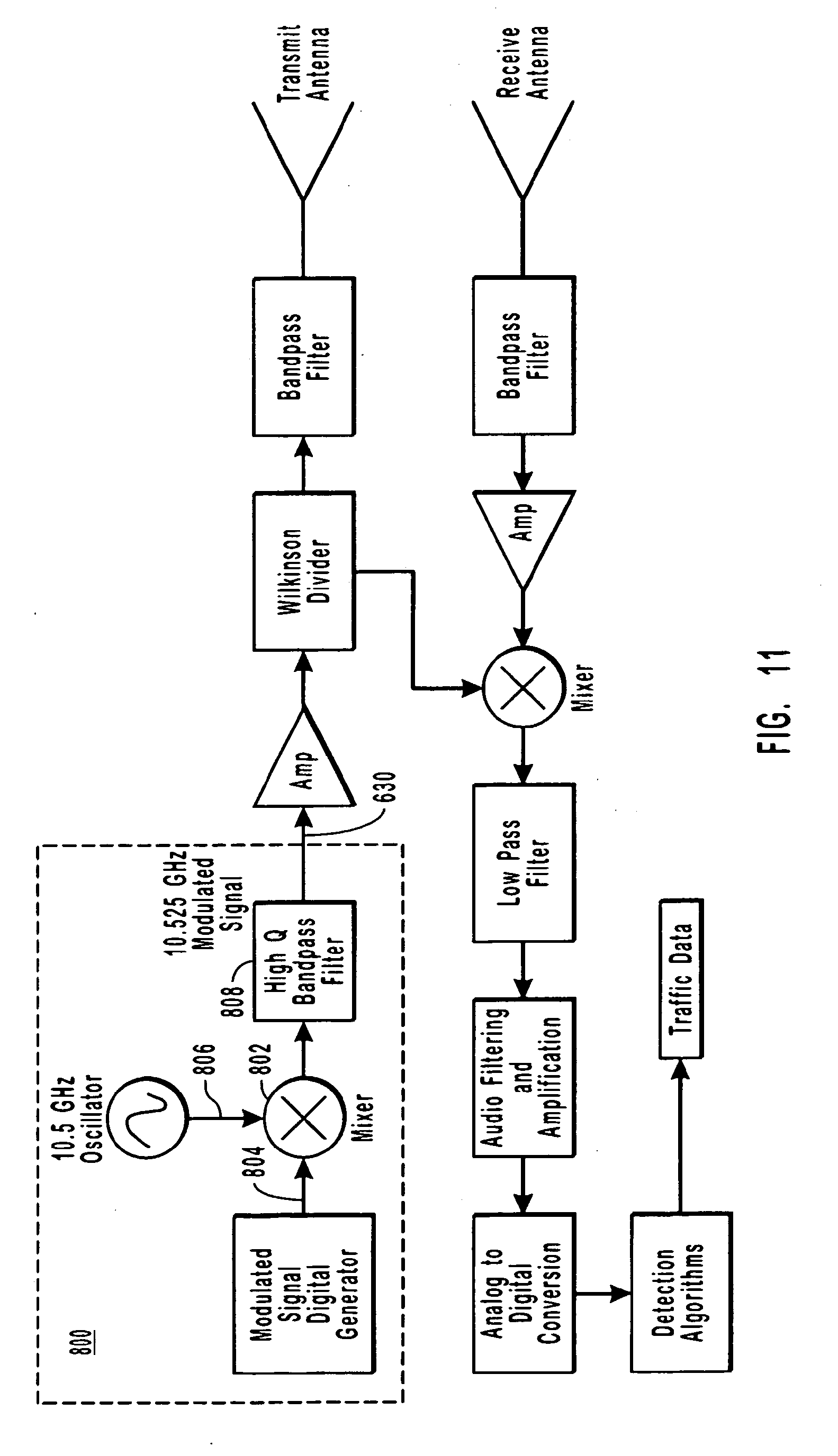