[0001] The invention relates to tissue engineering. It also relates to in vitro production of bioengineered tissue constructs containing spatially separated populations of living cells with extracellular matrix, and a method of preparation thereof. This method can be applied to the construction of a wide range of tissue constructs requiring spatially distinct domains with specific cell populations, extracellular matrix and mechanical properties.

[0002] Tissue engineering is the art of reconstructing tissue from isolated cells and extracellular matrix components. One efficient way of reconstructing tissues and organs is to first produce living tissue sheets. These sheets, composed of living cells and extracellular matrix, can be used as a starting material for the craving of tissue-engineered constructs. When mechanically assembled with the appropriate tensile strength and the desired shape, the cells will continue to secrete matrix proteins and adjacent sheets will fuse together to form a solid structure. Moreover, these constructs can be made from autologous cells, thus avoiding the immune rejection of the graft.
[0003] Living tissue sheets sufficiently strong to be manipulated can be obtained by several methods. The extracellular matrix in the tissue sheet can be either exogenously added or self-produced by the cells. Cells can be seeded along with exogenous extracellular matrix components to form a tissue sheet (ref Bell). Also, cultured cells can synthesize their own extracellular matrix when incubated in the presence of appropriate reagents. It has long been known that ascorbate stimulates collagen production in cultured cells of mesenchymal origin. When cultured on a plastic surface in the presence of ascorbic acid, fibroblasts and smooth muscle cells will form sheets that eventually detach from the culturing substratum. This auto-assembly method yields tissue with organ-like mechanical properties and devoid of any synthetic material, making it perfectly compatible with the living organism in which it is to be implanted, as shown in L'Heureux et al. (FASEB J. 1998, 12:47-57).
[0004] When a tissue reconstructed with layers of different cell types has to be produced, the successive assembly of the different separated sheets increase the production time of the final product. Furthermore, tissue artifacts may appear at the point of fusion between the sheets as prepared in the art.

[0019] Fig. 1 is a the schematic representation of the method of preparing tissue constructs according to one embodiment of the present invention.

MODES OF CARRYING OUT THE INVENTION

Apparatus and method for preparing a continuous tissue construct

[0038] Fig. 1 depicts the structure of a typical separator. A rigid rod, that can be made of wood, polymer, metal or biological material, may be concealed in an elastomer matrix that is shaped in a way that allows the gap between the cells to be sufficiently small to be covered by the cells once the separator is removed, preferably a blade-like structure with a sharp edge. The assembly has to be made of materials that can be sterilized. At both ends of the rod, a small piece of elastomer functions as a compression fitting that allows the separator to fit tightly in place between the flask walls. When the separator is in place, the edge is in contact with the plastic surface of the culture flask effectively separating the surface in two leak proof compartments. The different cell lines are then seeded in each compartment, and allowed to attach to the surface of the flask before the separator is removed. More than two separators can be used simultaneously to obtain more than two different compartments. This attachment can take 1 to 24 hours, depending on the cell line used (4 hours works well with fibroblasts). The advantage of using a sharp edge on the separator is that only a small gap is created in the cell distribution. As soon as the separator is removed, the cells quickly fill this space, resulting in a continuous cell distribution. The sheet composed of the cells and the extracellular matrix secreted is continuous, allowing the assembly of both cell types into a continuous sheet in one step.
[0039] The present invention was applied to the assembly of a tissue-engineered blood vessel. Natural blood vessel walls are formed of two structurally and functionally distinct layers: the inner contractile media, composed of smooth muscle cells (SMC), and the mechanically strong adventice, composed of fibroblasts. In order to reconstruct this structure, one or more sheets of SMCs can be rolled over a solid mandrel to form the contractile media layer and then one or more fibroblast sheets can be rolled over the media layer to produce the adventitia layer.
[0040] With the proposed invention, the cell sheets are made as one long continuous sheet composed of two parts: a SMC domain and a fibroblast domain. The size and length of the tissue sheet as well as the cellular domains can be adjusted by selecting appropriate culture flasks. This longer sheet is rolled in the same manner as described above, producing in a single step a complete vessel wall with a dual layer design that mimics the arrangement of the natural vascular wall. The following cell culture methods were used in order to obtain cell sheets: typically, a removable separator was placed in a 500 cm2 culture dish in order to produce two distinct compartments. Viable sub-cultured smooth muscle cells and fibroblasts (passages 3-7) were then separately seeded on each side of the separated culture dish with a final seeding density of 104 cells/cm2. Cells were fed with 80 ml of culture medium (3:1 mixture of Dulbecco's Modification of Eagle's Medium™ and Ham's F12 Modified Medium™, 10% Fetal Clone II from Hyclone™, 100 U/ml of penicillin G and 25 µg/ml of gentamicin). The culture medium was changed every two days. A freshly prepared solution of ascorbic acid was added every two days to the culture medium at a final concentration of 50 ug/ml. Cells were kept in a humidified atmosphere (92% air and 8% CO2). Under these conditions the cells will adhere to the culture surface and proliferate until the entire culture surface is covered with cells. The separator has to be in place during the cell adhesion phase and can be removed during the cell proliferation phase or during the sheet formation phase. If the culture conditions are maintained, the cells form a tissue in which multiple cell layers are embedded in an endogenous fibrous material and the sheet formed will eventually detach itself as a whole from the substratum. To roll the living sheet, one edge of the sheet is placed between a tubular support and a thread. The thread squeezes the sheet and holds it in place while the sheet is rolled around the tubular support and finally the sheet is re-secured with a thread to prevent unrolling. Thereafter, the tubular living tissue can be cultured for several weeks, with ascorbic acid, to allow further maturation of the tissue. 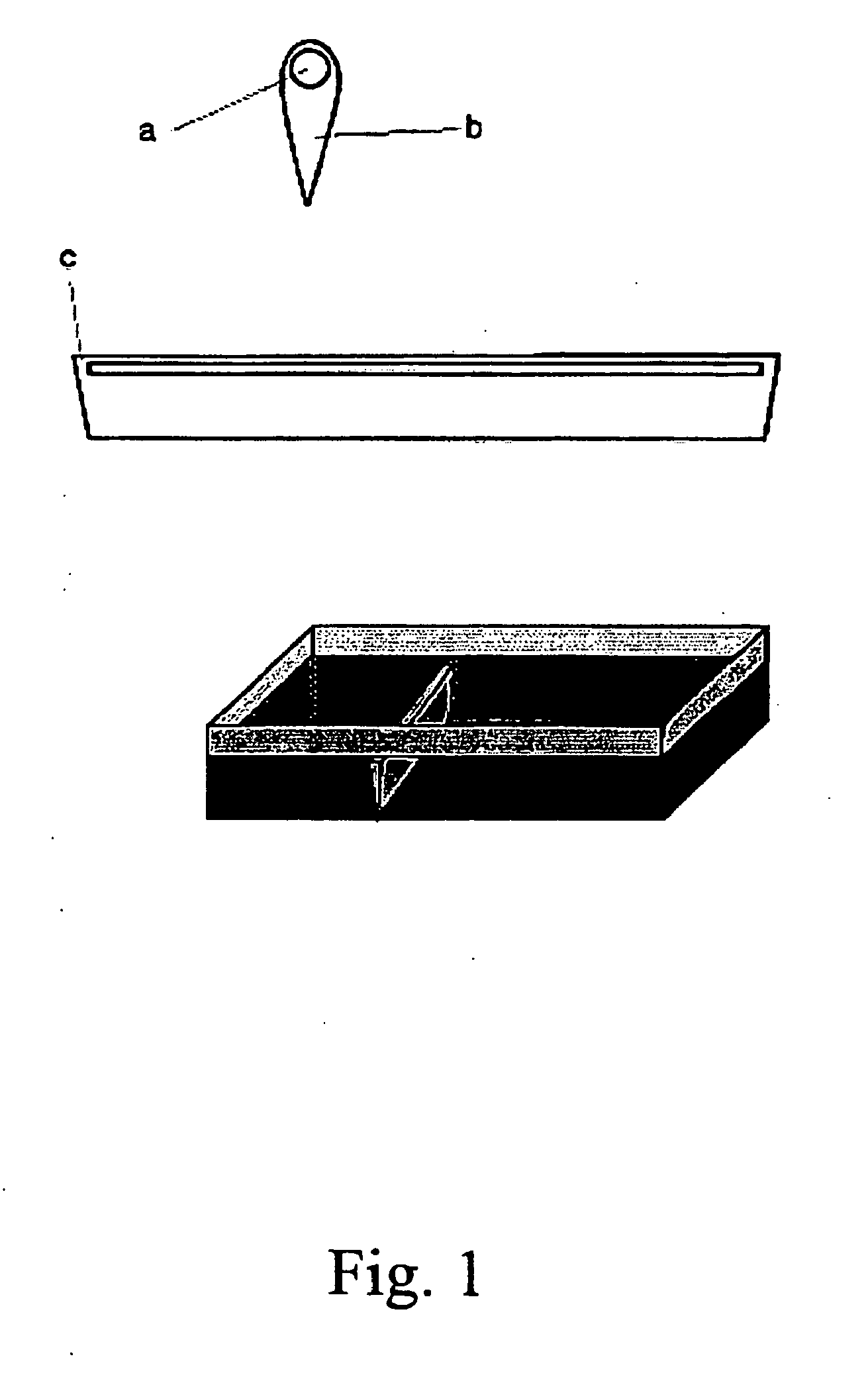