FIG. 1 is a block diagram of an execution unit embodying aspects of the invention, the unit is assumed to be pipelined;

FIG. 2 is a pipeline diagram of the execution of an accumulation in register R0 by an execution unit having a four stage execution pipeline;

FIG. 3 is a pipeline diagram of the clean-up phase of the accumulation illustrated in FIG. 1;

FIG. 4 is a flowchart of a method embodying aspects of the invention;

FIG. 5 is a flowchart of a conventional method of issuing instructions to an execution pipeline in an execution unit; and

FIG. 6 is a block diagram of an example of a conventional execution unit.

[0053] In this example, the NOP instructions are the non-related instructions required in the instruction stream so that the value in R0 computed by any iteration is ready for use in the same instruction in the next iteration.
[0054] Even though the load operation can also take multiple cycles, other suitable techniques can be used to get around that problem by restructuring the pipeline so that loads happen earlier in the pipeline than addition, thereby virtually eliminating any load-to-use stall cycles. So, in the context of the present invention, loads can be treated as though they complete in one cycle.
[0055] The above code can be reordered by the compiler, so that a pipeline trace as shown in FIGS. 2 and 3 is produced. An example of such code is as follows: 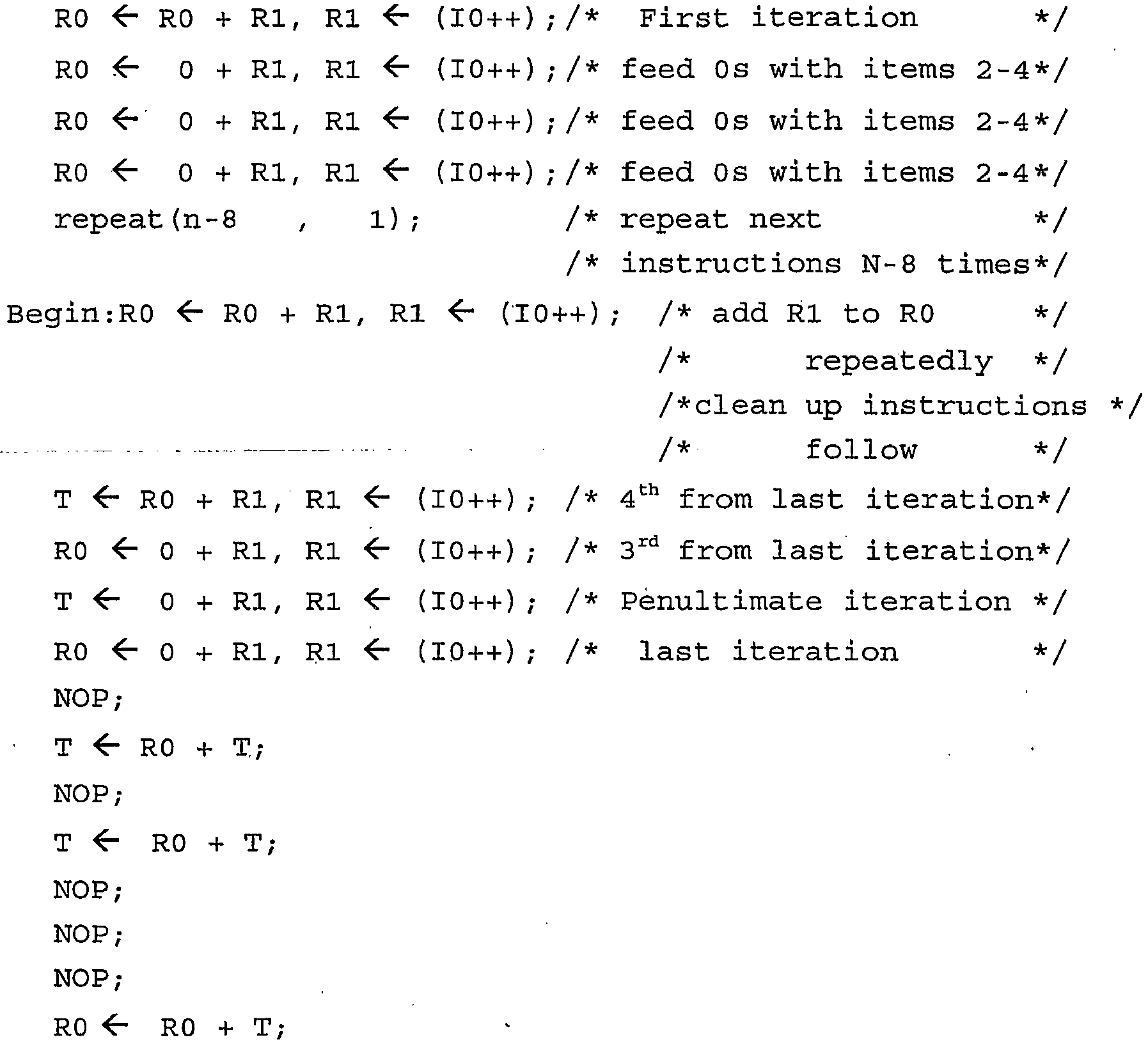 [0056] The original code would take 4N+4 cycles, whereas the new code takes N+12 cycles. The above code, embodying aspects of the invention, does not require any change in the hardware. The register T can be any available data register. It is possible to reduce code size by absorbing four instructions (not shown) following the looped instruction into the loop, with attendant suitable hardware changes as would be understood by the skilled artisan.
[0057] Having thus described several aspects of at least one embodiment of this invention, it is to be appreciated various alterations, modifications, and improvements will readily occur to those skilled in the art. Such alterations, modifications, and improvements are intended to be part of this disclosure, and are intended to be within the spirit and scope of the invention. Accordingly, the foregoing description and drawings are by way of example only.

1. A method of executing an instruction stream in a pipelined execution unit (100) of depth, p, characterised by:

detecting an iterative computation in the instruction stream of an instruction having an operand and a destination that are the same;

combining results obtained from the p threads after all programmed iterations have completed.

2. The method of claim 1, wherein the instruction stream is provided to the execution unit as a sequence of instructions in natural order absent software scheduling.

3. The method of claim 1, wherein executing iterated instructions and combining results uses only one destination register and only one temporary register.

4. In a programmable data processor including instruction interlocks and including a pipelined computation unit (100) having a pipeline of depth p, a circuit characterised by comprising:

5. The circuit of claim 4, characterised by a register T not used for other computation;
the controller being further constructed and arranged to redirect results to the register T, after detection of the break in the instruction stream when the next instruction is not another instance of the iterated operation. 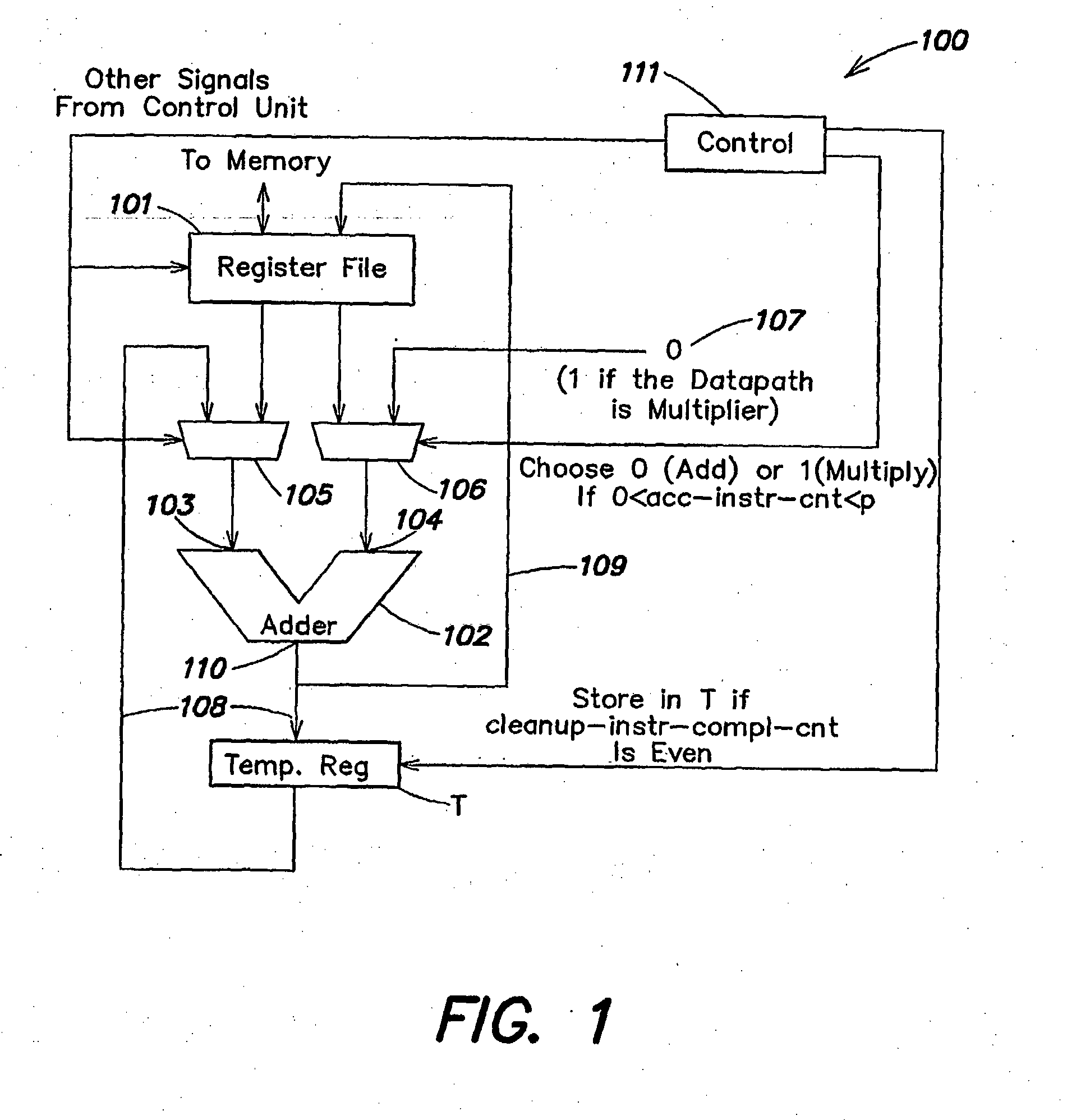 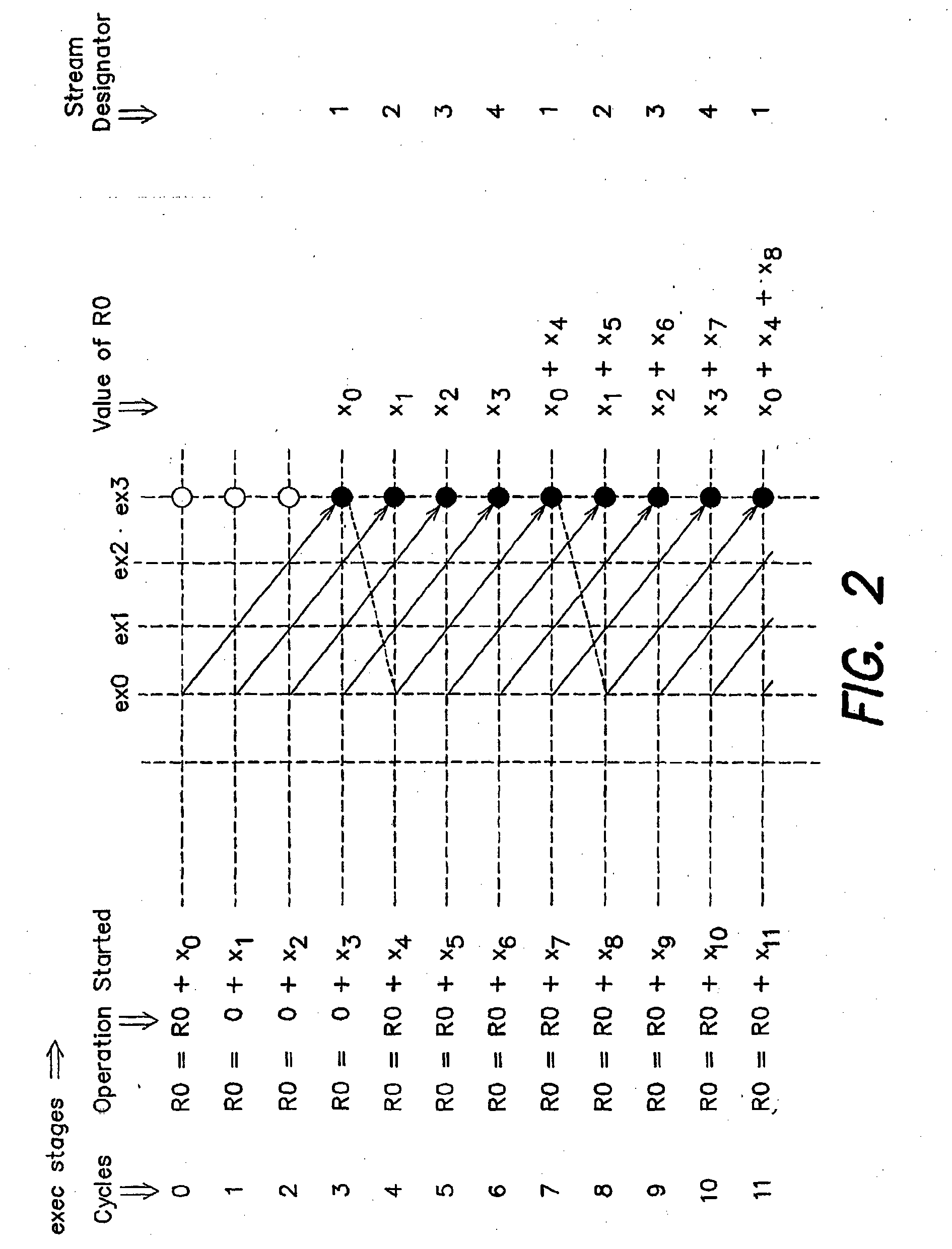 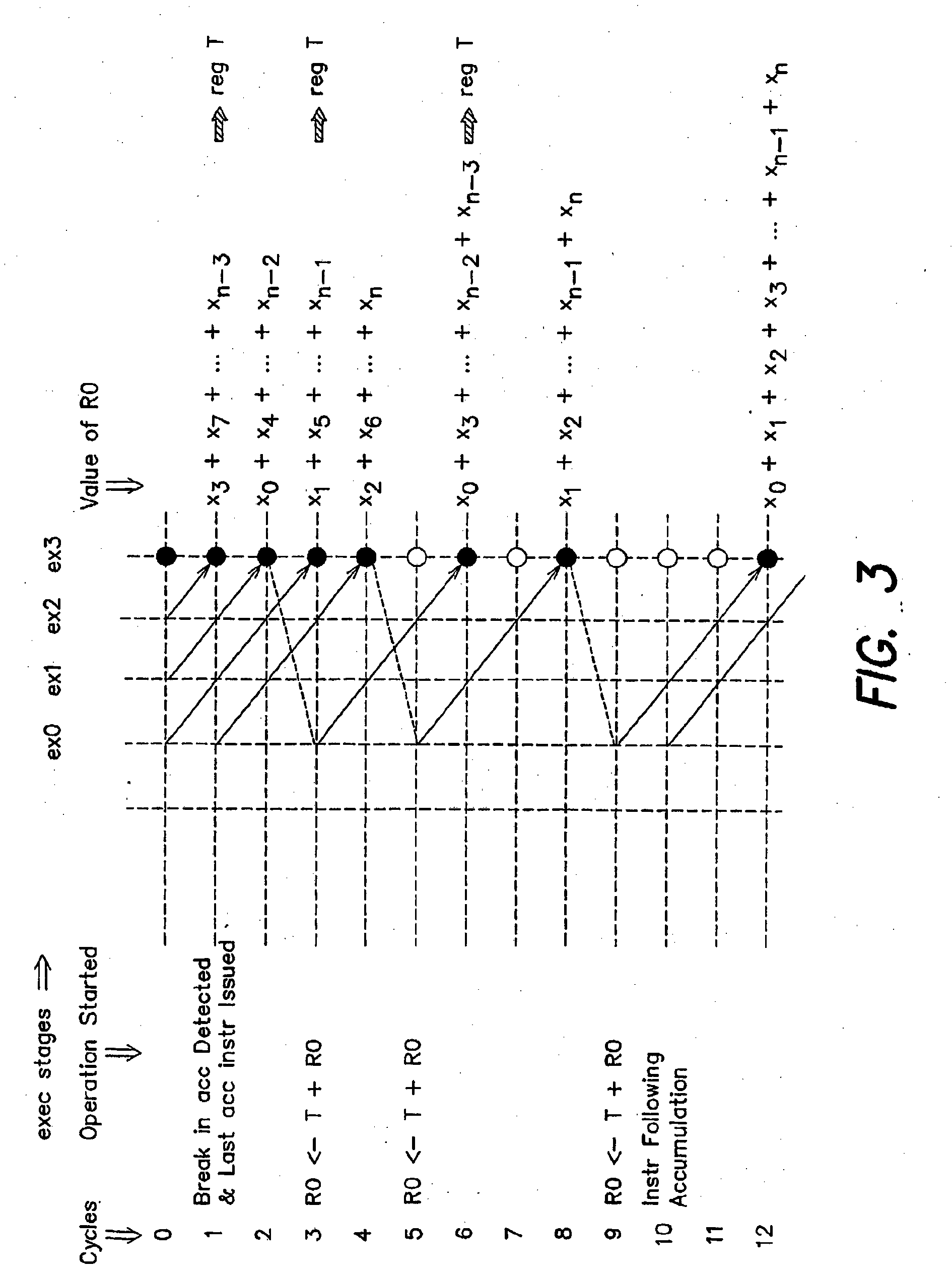 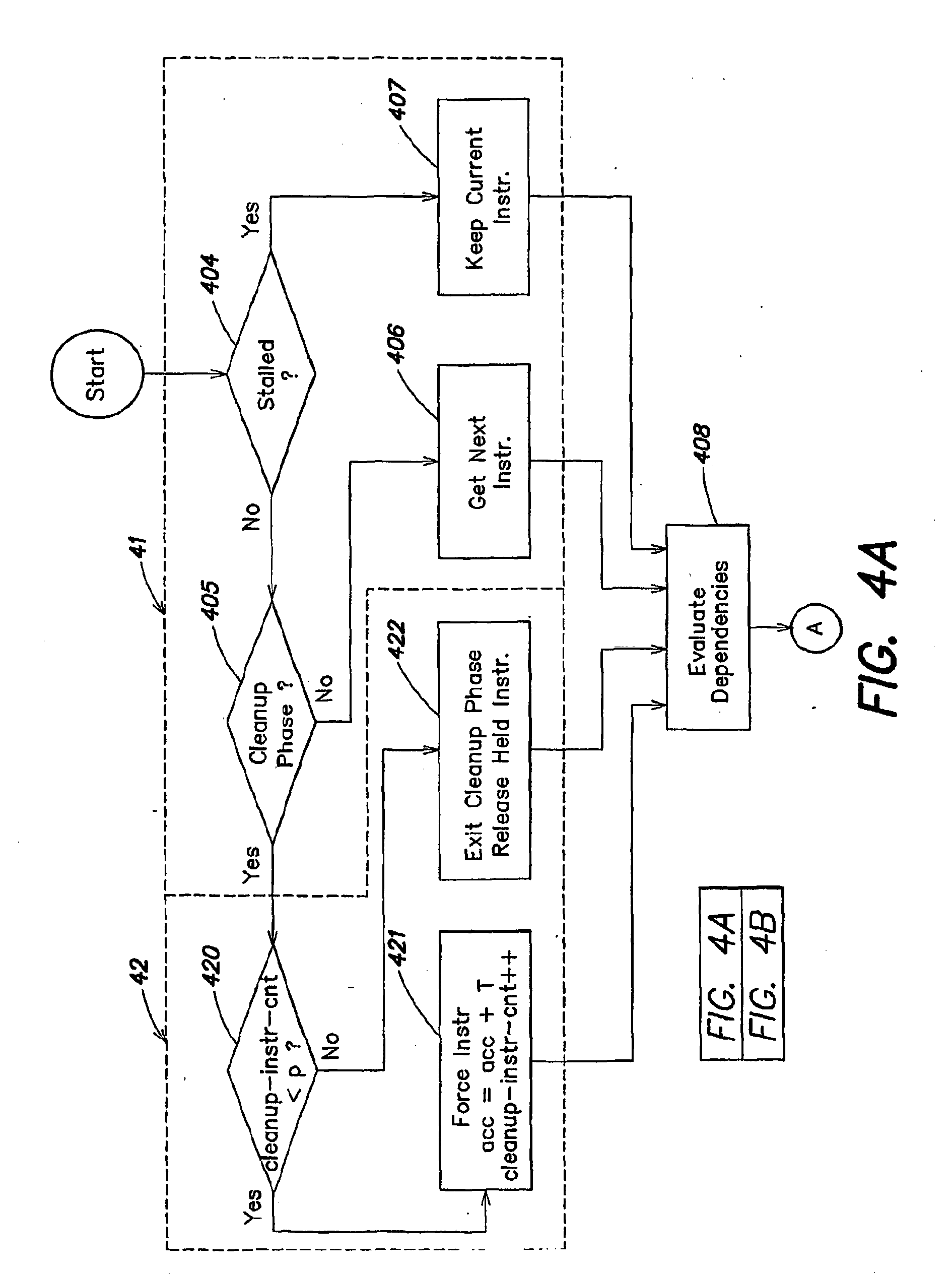 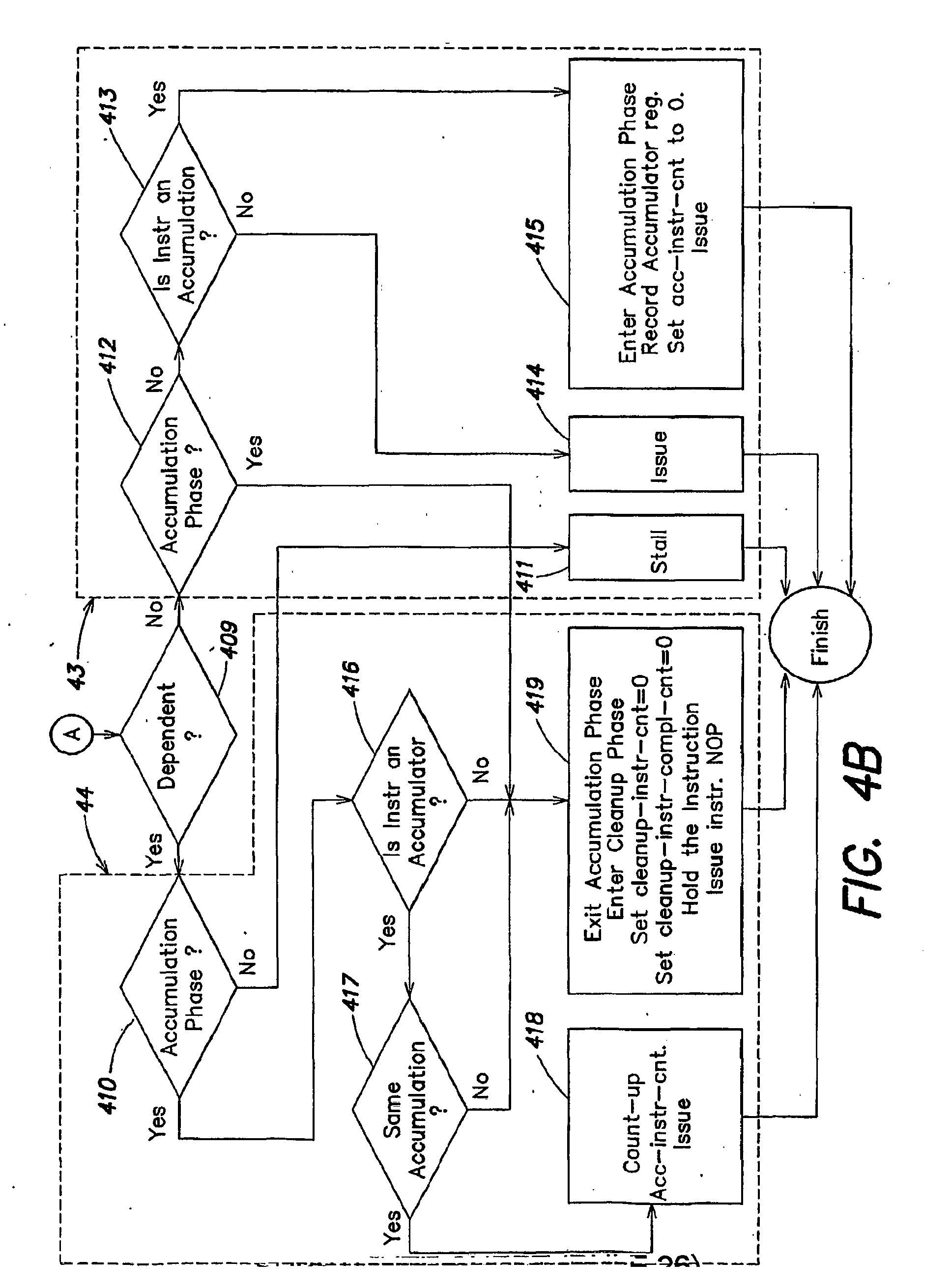 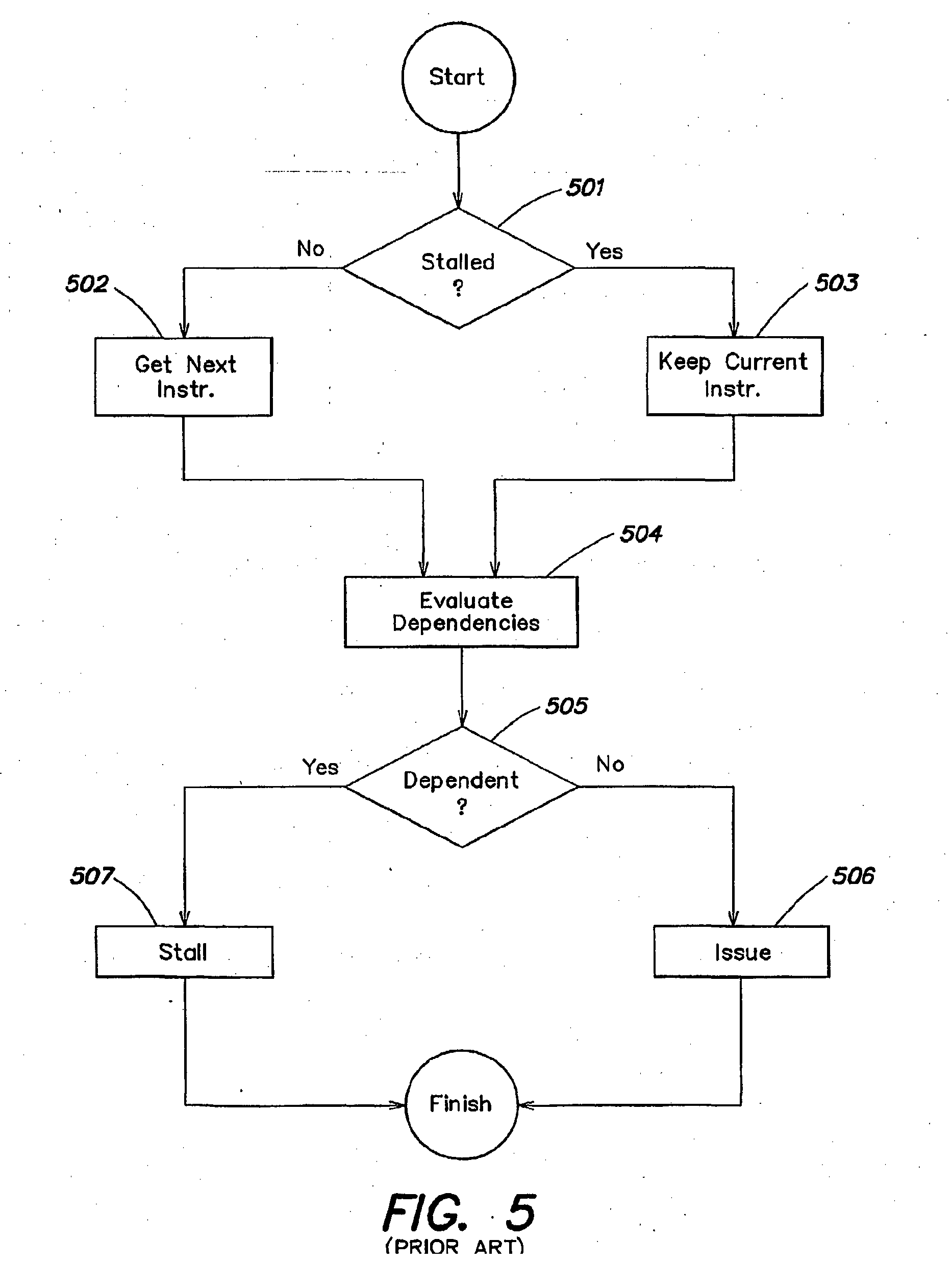 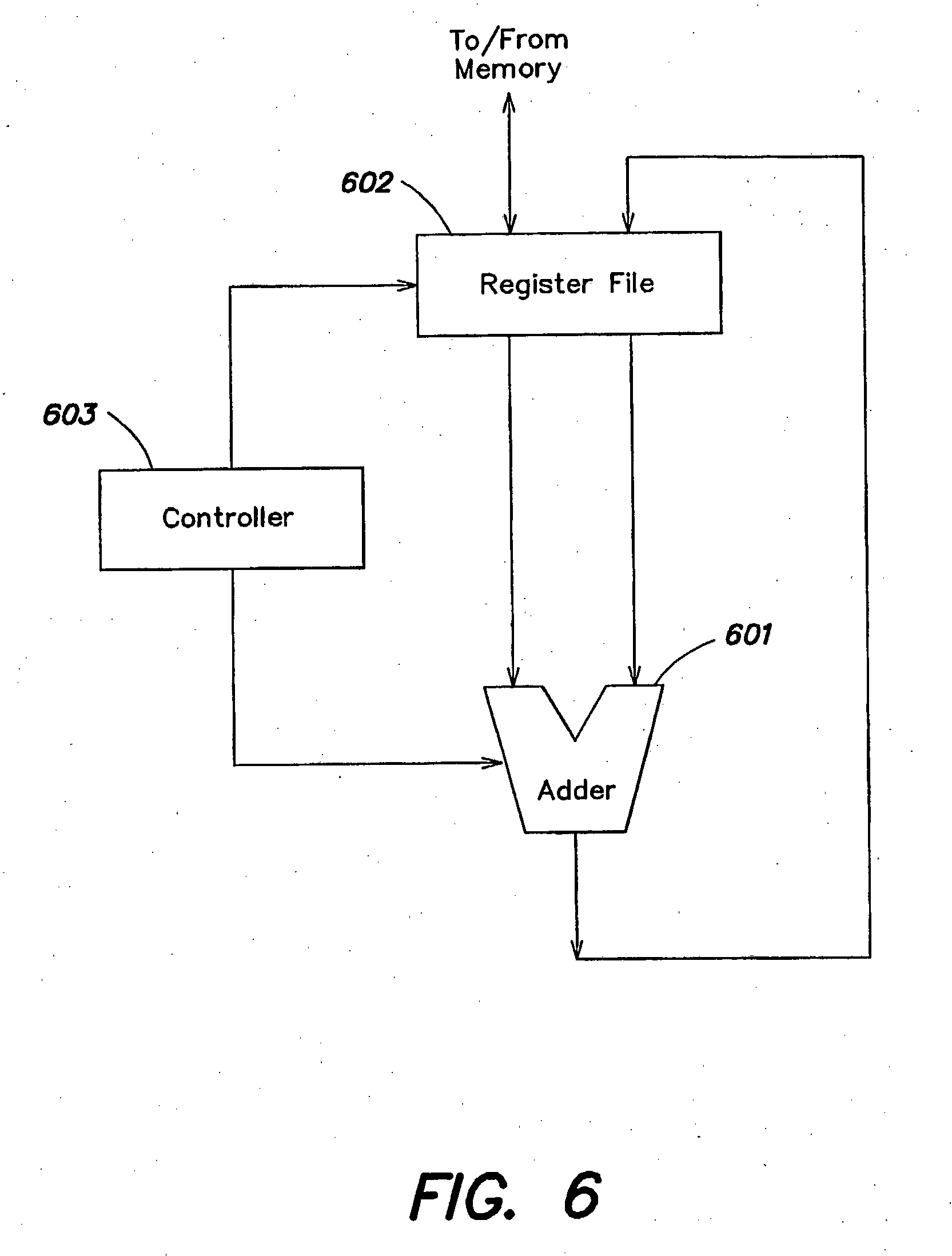