[0001] The present invention relates to an in vitro method of causing autolysis of a population of gram negative bacteria. The disclosure provides for the application of therapies based upon immunoglobulin or immunoglobulin-like receptor molecules that have affinity and specificity for acyl homoserine lactone signalling molecules involved in the processes of bacterial cell to cell communication. By binding to such molecules, the receptors can be used to modulate the extra-cellular concentrations of molecules involved in environment-sensing and virulence in Pseudomonas aeruginosa, and in so doing can induce a process of rapid cell death (autolysis) within bacterial populations.

[0019] The present invention provides for methods for reducing numbers of the pathogenic bacterium Pseudomonas aeruginosa by regulating the extra-cellular concentrations of bacterial cell signalling molecules. By selective removal (binding or degradation) of lactone-derived cell signal molecules, an imbalance in the ratios of AHL to PQS signal molecules is produced which stimulates rapid cell death (or autolysis) of Ps. aeruginosa. Alternatively, PQS may be administered alone or in conjunction with anti-AHL receptors. Whereas other bactericidal treatments act directly on the cell to cause death, the present invention targets extra-cellular signalling molecules in order to mimic an environment unable to sustain high population densities, and so induce a collapse in bacterial cell numbers. As such it is much less likely that strains resistant to the therapy will emerge.
[0020] Aspects of the invention are as set out in the claims.
[0021] According to a first aspect of the present invention, there is provided an in vitro method of causing autolysis of a population of gram-negative bacteria, said method comprising administration to the population of an antibody to a lactone or lactone-derived signal molecule secreted by gram-negative bacteria so as to cause an imbalance in the ratio of homoserine lactone (HL) signal molecule to quinolone signal (QS) signal molecule in the environment of the population of the gram-negative bacteria.
[0022] The gram-negative bacteria may be Actinobacillus actinomycetemcomitans, Acinetobacter baumannii, Bordetella pertussis, Brucella sp., Campylobacter sp., Capnocytophaga sp., Cardiobacterium hominis, Eikenella corrodens, Francisella tularensis, Haemophilus ducreyi, Haemophilus influenzae, Helicobacter pylori, Kingella kingae, Legionella pneumophila, Pasteurella multocida, Citrobacter sp., Enterobacter sp., Escherichia coli, Klebsiella pneumoniae, Proteus sp., Salmonella enteriditis, Salmonella typhi, Serratia marcescens, Shigella sp., Yersinia enterocolitica, Yersinia pestis, Neisseria gonorrhoeae, Neisseria meningitidis, Moraxella catarrhalis, Veillonella sp., Bacteroides fragilis, Bacteroides sp., Prevotella sp., Fusobacterium sp., Spirillum minus, Aeromonas sp., Plesiomonas shigelloides, Vibrio cholerae, Vibrio parahaemolyticus, Vibrio vulnificus, Acinetobacter sp., Flavobacterium sp., Pseudomonas aeruginosa, Burkholderia cepacia, Burkholderia pseudomallei, Xanthomonas maltophilia, or Stenotrophomonas maltophila. In a preferred embodiment, the gram-negative bacteria is Pseudomonas aeruginosa.
[0023] Suitably, the homoserine lactone (HL) signal molecule may be a homoserine lactone molecule with a formula selected from the group consisting of:

R3 may be -H, or alternatively, the nitrogen atom (N) may be unsubsituted, in which case the aromatic ring is further unsaturated.

[0029] Suitably, the quinolone signal molecule of general formula (IV) may be

Figure 1 shows a competition ELISA of the anti-AHL single-chain antibodies Hap2 and Hap 5 binding to dDHL-BSA in the presence of free dDHL and BHL respectively.

Figure 2 shows the dramatic reduction of viable animal-passaged Ps. aeruginosa PA01 in the presence of single-chain antibody Hap2 on ice over 40 minutes. The reduction is in the order of 1.5 log CFU/ml.

Figure 3 shows that the survival of non animal-passaged Ps. aeruginosa strain PA14 in the presence of monoclonal single-chain antibodies Hap2 or Hap5 compared to a PBS control.

Figure 5 shows the survival times of mice in the pulmonary infection model. N=6 per group. *P<0.01 and +P<0.05 longer for indicated group than for PBS negative control.

[0085] A naive human antibody phage display library was screened against conjugates of the acyl-homoserine lactone dDHL (dodecanoyl homoserine lactone). Briefly, a derivative of dDHL including a carboxyl group at the end of the acyl chain was conjugated to the carrier proteins Bovine Serum Albumin (BSA) and Bovine Thyroglobulin (TG) using well known chemistry. The antibody library was screened (panned) against each conjugate alternately for three rounds, with those phage binding to conjugate being isolated, amplified, and used for the subsequent round. After the first round, all binding phage were recovered and amplified. During the second and third rounds, bound phage were eluted from the immobilised conjugate by incubation with a solution of free soluble native dDHL or BHL (Butyl-homoserine lactone). Monoclonal phage antibodies from round three were screened initially for binding to both AHL conjugates, and to carrier protein alone. Those clones binding only to the conjugated antigen were further screened for the ability to bind to free dDHL or free BHL by competitive binding ELISA. Two clones, designated Hap 2 and Hap 5, were isolated that could be inhibited in binding to dDHL-conjugate in the presence of free dDHL (Hap 2) and free BHL (Hap 5) (Figure 1).

[0086] Ps. aeruginosa clinical isolate PA01 was passaged in female BALB/c mice (Charles River, approximately 30 days old) by intra-peritoneally injecting 50 microlitres of overnight PA01 broth culture containing approximately 5 x 108 CFU as determined by serial plate dilutions. After 24 hours a blood sample was collected from the retro-orbital plexus and the PA01 isolate was recovered from the blood culture. Isolates were confirmed as being P. aeruginosa by Gram staining, colony morphology and pyocyanin production. Aliquots of bacteria were stored at -70°C and when required, were thawed rapidly, harvested by centrifugation and resuspended in 50 microlitres of sterile phosphate-buffered saline (PBS) or sterile PBS containing Hap2 antibody at a concentration of 37.5 µM. Aliquots of bacteria were placed on ice and serial dilutions in PBS were plated out on blood agar base plates at various time-points (0, 20, 40 minutes). Plates were incubated overnight at 37°C and colonies were counted to determine viable bacterial numbers at each time-point (Figure 2).
[0087] A second assay was developed using P. aeruginosa clinical isolate PA14 that had not been previously passaged in mice. A 5 ml culture of PA14 was grown overnight at 37°C in LB. Serial 10-fold dilutions to 10-6 were made in L broth, and 50 µL of dilution was added to 50 µL of PBS, antibody Hap2 (37.5 µM) or antibody Hap5 (15 µM). Samples were incubated on ice for various time periods and then immediately plated on brain heart infusion agar plates and incubated overnight at 37°C. Numbers of colonies were then counted for each plate (Figure 3).

[0088] Ps. aeruginosa clinical isolate PA01 was passaged in female BALB/c mice (Charles River, approximately 4 weeks old) by intraperitoneally injecting 50 microlitres of overnight PA01 1 broth culture containing approximately 5 x 108 CFU as determined by serial plate dilutions. After 24 hours a blood sample was collected from the retro-orbital plexus and the PA01 isolate was recovered from the blood culture. Isolates were confirmed as being P. aeruginosa by Gram staining, colony morphology and pyocyanin production. Aliquots of bacteria were stored at -70°C and when required, were thawed rapidly, harvested by centrifugation and resuspended in sterile phosphate-buffered saline (PBS). Serial dilutions of bacteria in PBS were plated out on blood agar base plates for viable cell enumeration. Plates were incubated overnight at 37°C and colonies were counted to determine viable bacterial numbers.
[0089] For the first pulmonary infection experiment, survival and bacteraemia were monitored over a period of one week. Six adult female BALB/c mice (approx. 4 weeks old) per treatment group were lightly anaesthetized using 2.5 % (v/v) halothane. An infectious dose of 1.0 x 107 CFU PA01 resuspended in sterile PBS or PBS containing antibodies was administered into the nares in a total volume of 50 µl. The infectious dose was confirmed by plating out serial dilutions on blood agar base plates for viable cell enumeration. Five treatment groups were monitored; the first group were infected with PA01 suspended in PBS alone; the second group were infected with PA01 mixed with 37.5 µM Hap 2 in PBS; the third were infected with PA01 mixed with 15 µM Hap 5 in PBS; the fourth were infected with PA01 mixed with the anti-AHL antibodies Hap 2 and Hap 5; and the final group was infected with PA01 mixed with PBS and given a course of subcutaneous injections of 0.2 mg gentamycin (first injection 2 h post-infection then with subsequent s/c boosts twice a day for 3 days). For the groups 2 and 3, 37.5 µM Hap 2 or 15 µM Hap 5 antibodies were mixed with the infectious dose immediately prior to intranasal infection (e.g. 10 µl bacteria plus 40 µl antibody). For group 4, 10 µl bacteria were mixed with 20 µl of 37.5 µM Hap 2 and 20 µl of 15 µM Hap 5.
[0090] At 2 h post infection mice were given an intravenous boost of PBS or PBS containing antibodies by directly injecting a total volume 50 µl into a tail vein.
[0091] At 24 h, a small volume of blood was removed from the tail vein of each mouse using a 1 ml insulin syringe (12.7 mm) for determination of bacteraemia using viable cell enumeration on BAB plates (Figure 4). Treatment with either Hap2, Hap 2 mixed with Hap5 or gentamycin significantly reduced the levels of viable P. aeruginosa within the bloodstream at 24 h.
[0092] In order to determine experimental endpoints, symptoms (weights, condition, behaviour) were monitored frequently for 168 h post infection, and mice were culled prior to reaching, or upon reaching, a moribund state. The post-infection times at which each animal was actively culled were recorded and used as a measure of "survival". Animals that survived the 7 days of the infectious process were assigned an arbitrary survival time of 168 h for statistical analysis (Figure 5, Table 1). All infected mice lost weight during the first 3 days post-infection, but animals that survived the bacterial challenge then recovered and their weight returned to baseline by 1 week post infection. This trend was not affected by treatment with any of the antibodies or gentamycin. Survival times of the mice were significantly increased by treatment of the mice with Hap 5, Hap 2/Hap5 or gentamycin. One mouse from the Hap 2 and Hap2/5 treatment groups survived infection.
Table 1

[0093] Five treatment groups of 6 mice were infected as described above, and given identical regimes of PBS, PBS plus antibodies or gentamycin. Two time-points (12 h and 24 h) were selected for analysis of bacteriology in blood (Figure 6), bronchoalveolar lavage (BAL) fluid (Figure 7), and lung tissue (Figure 8). Data from blood analysis were combined with that from the survival experiment (Example 2) in order to increase statistical validity. In this case viability of P. aeruginosa in the bloodstream was significantly reduced by treatment with Hap 2, Hap 5, or gentamycin.
[0094] Bacterial loads in BAL fluid and blood were determined by viable cell enumeration using serial dilutions on BAB plates as before. Viability of P. aeruginosa in the lung airways (BAL fluid) 12 h postinfection is significantly reduced by treatment of mice with Hap 2, Hap 5, or gentamycin.
[0095] Bacterial loads in lung tissue were determined by removing, weighing and homogenizing the lungs in 5 ml sterile PBS using an electric tissue homogenizer, then plating out serial dilutions on BAB plates for viable cell enumeration. Similar trends in the reduction of bacterial load were observed in the lung tissue examined 24 h postinfection (Figure 8), although only the Hap5 and gentamycin groups achieved statistically significant reductions in bacterial loads.
[0096] Geometric means of all results were calculated and are displayed along with ±1 standard error of the mean (SEM). Survival assays were analysed using Mann-Whitney U tests; all other data were analysed with Student's t test, and a P value of <0.05 was considered statistically significant. 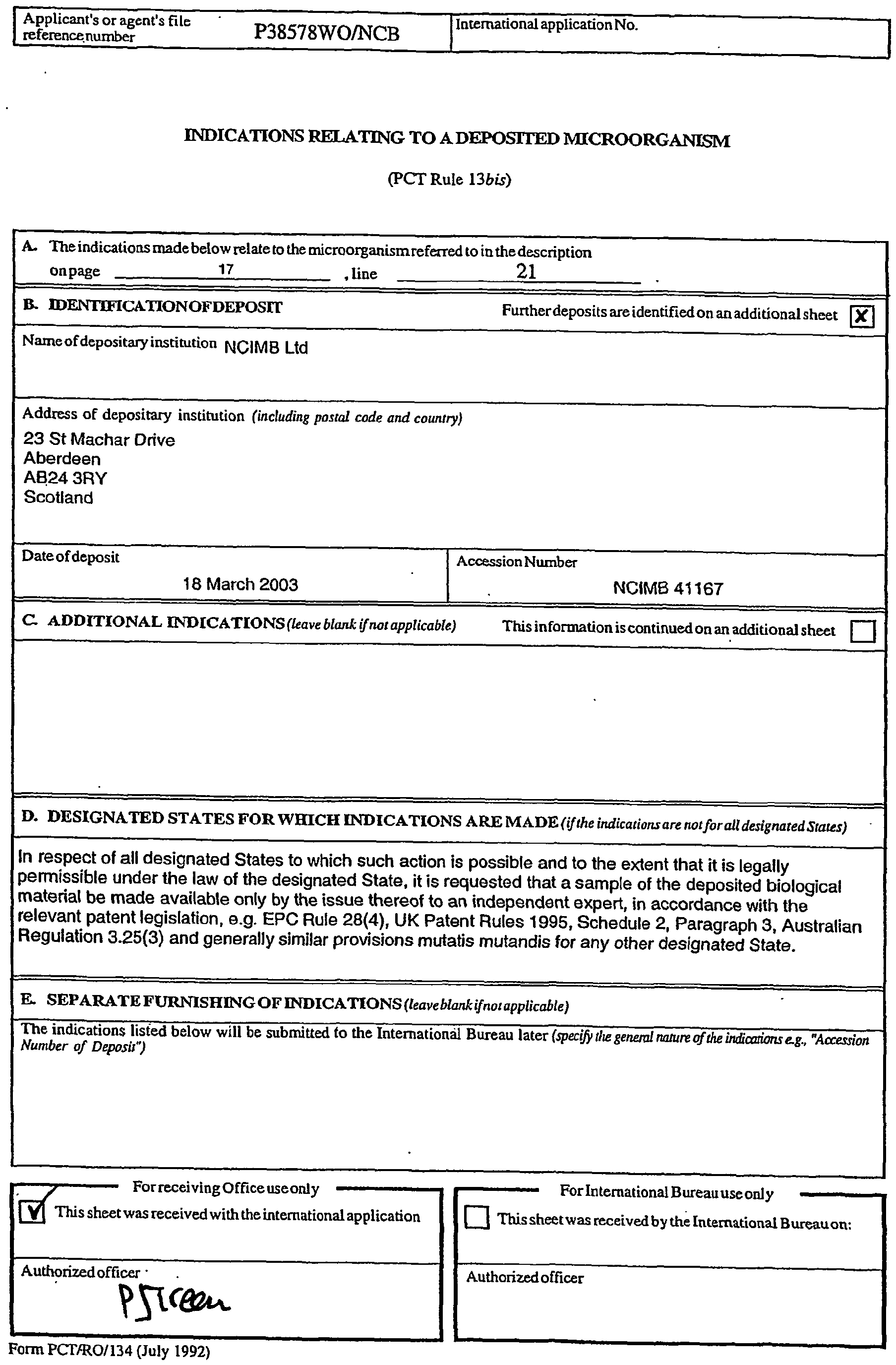 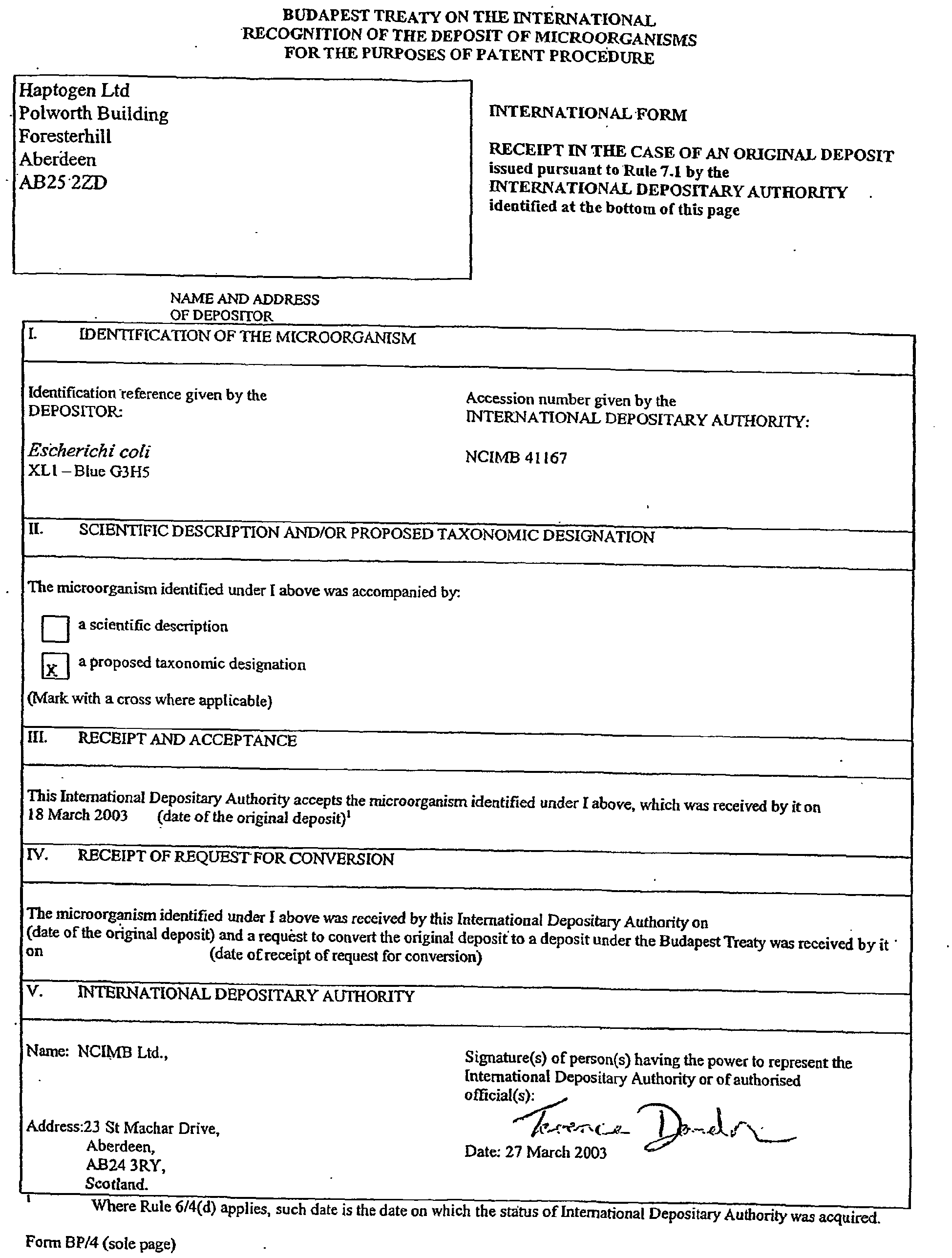 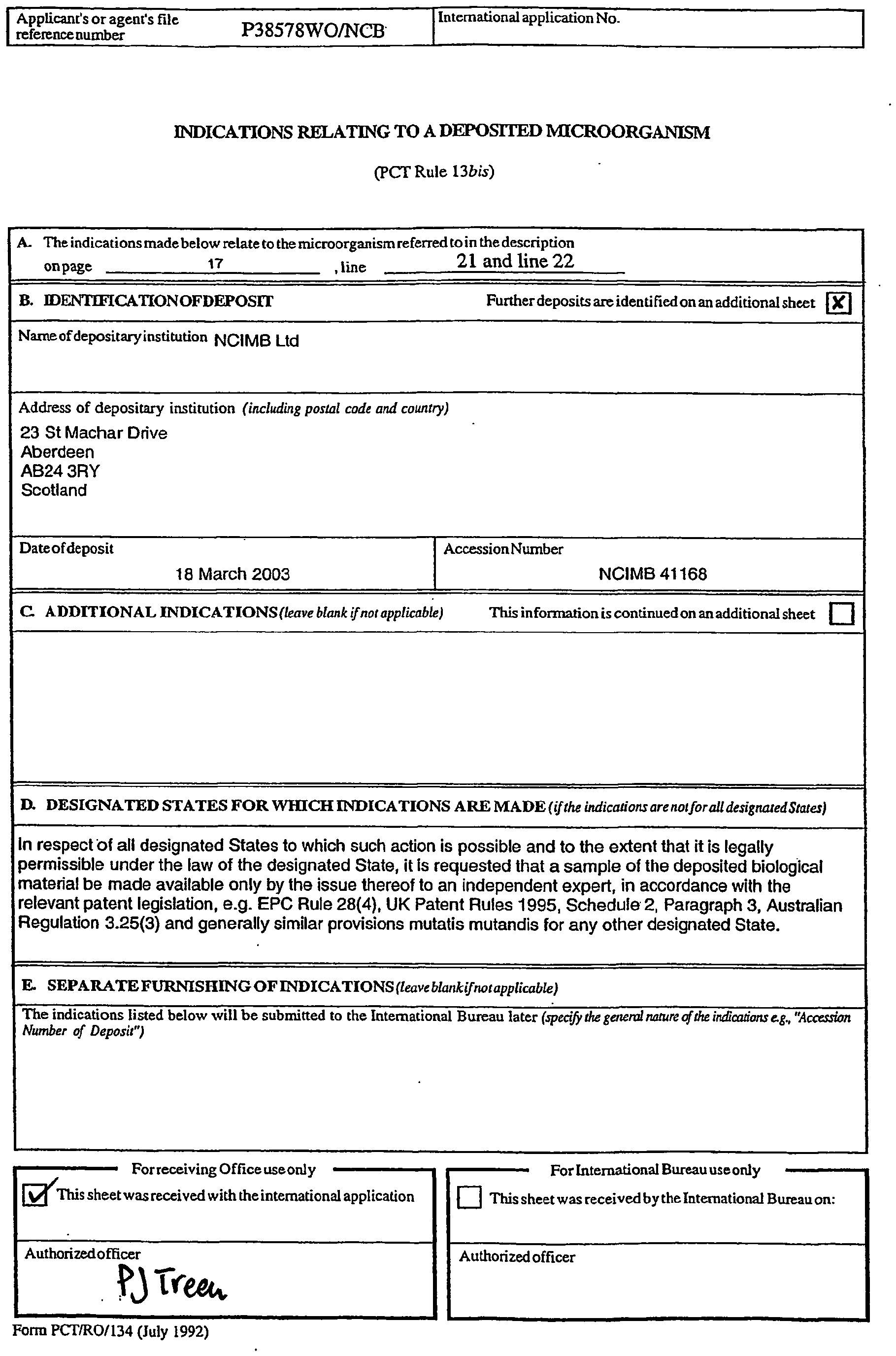 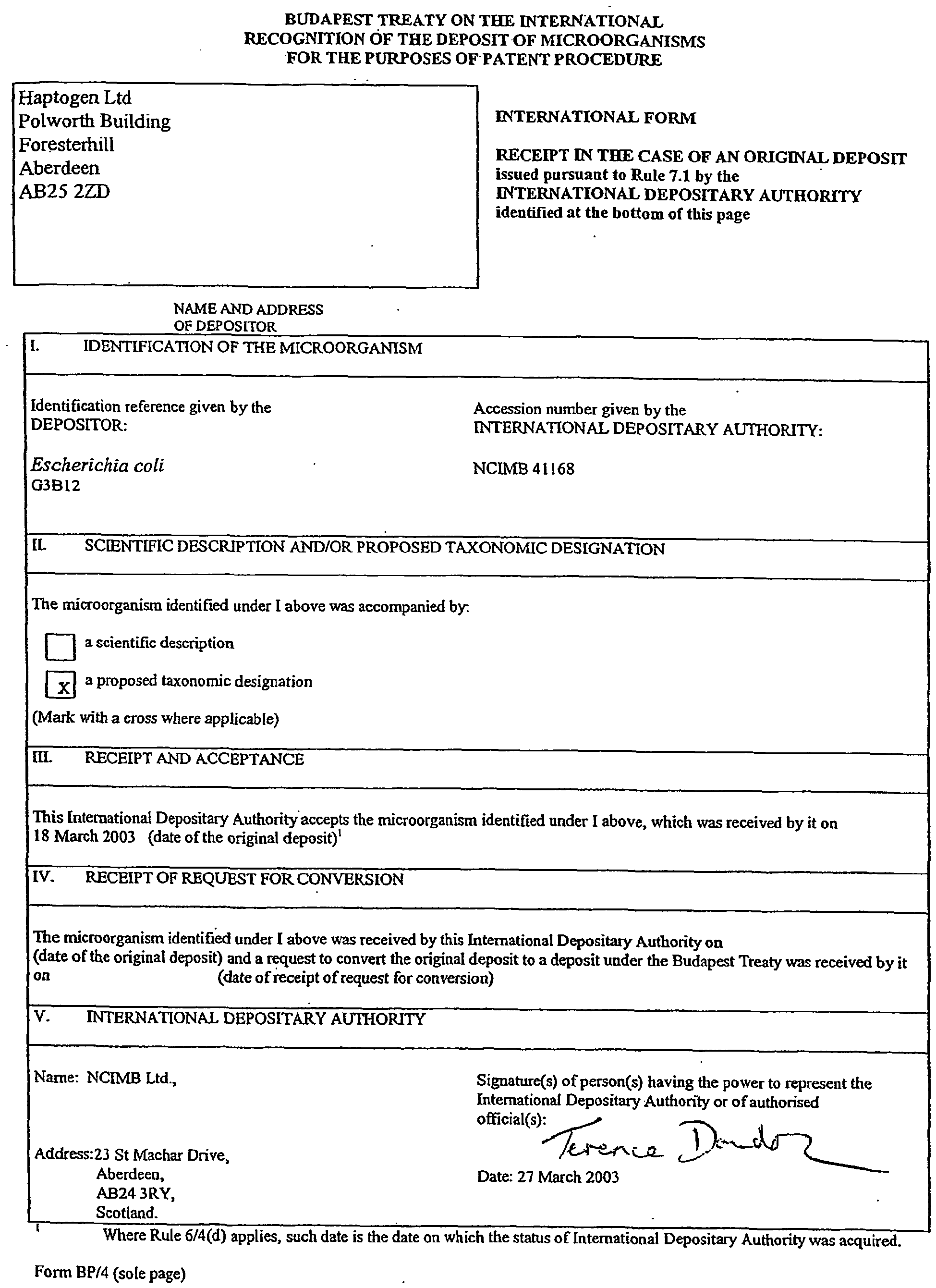 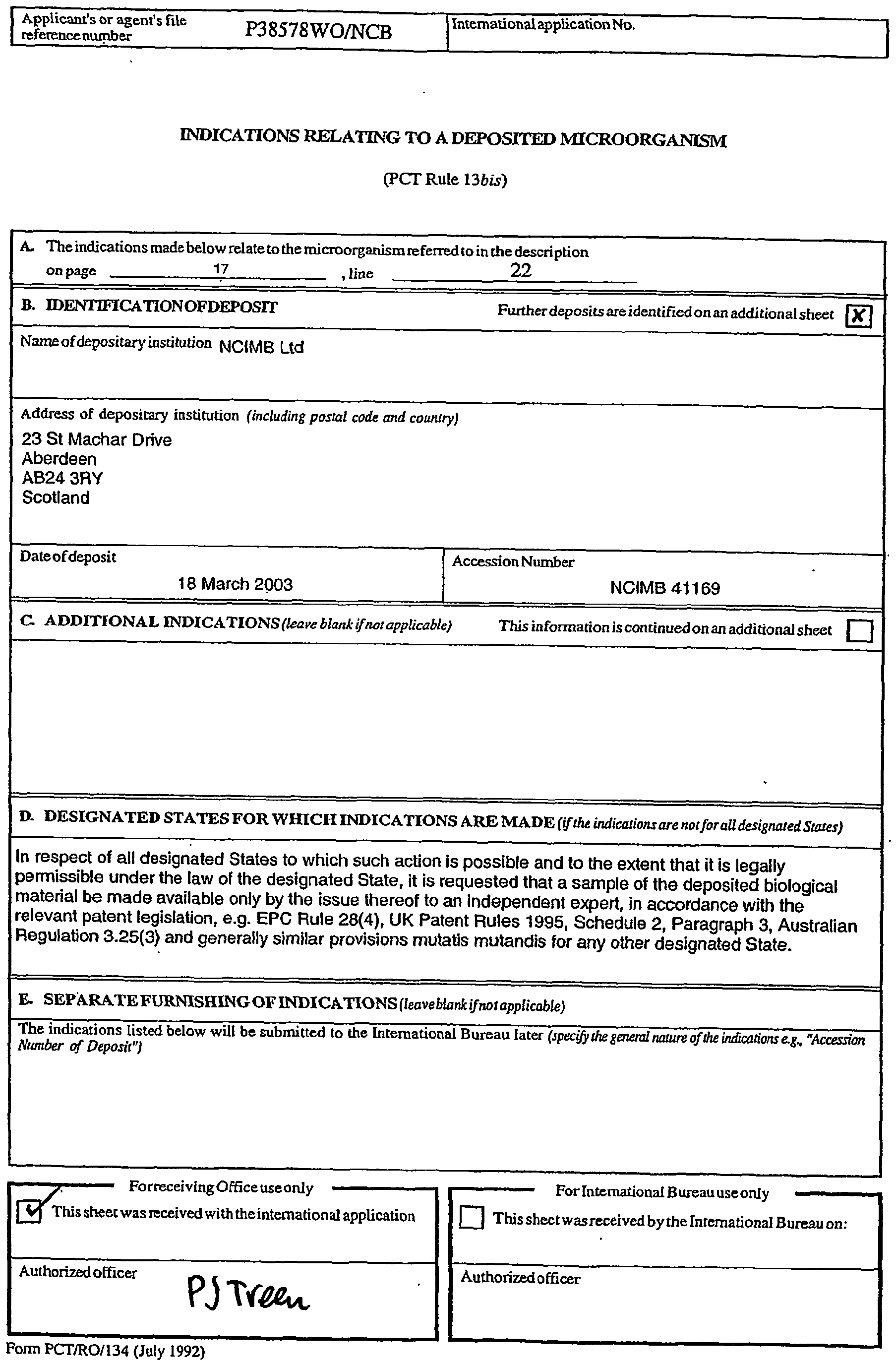 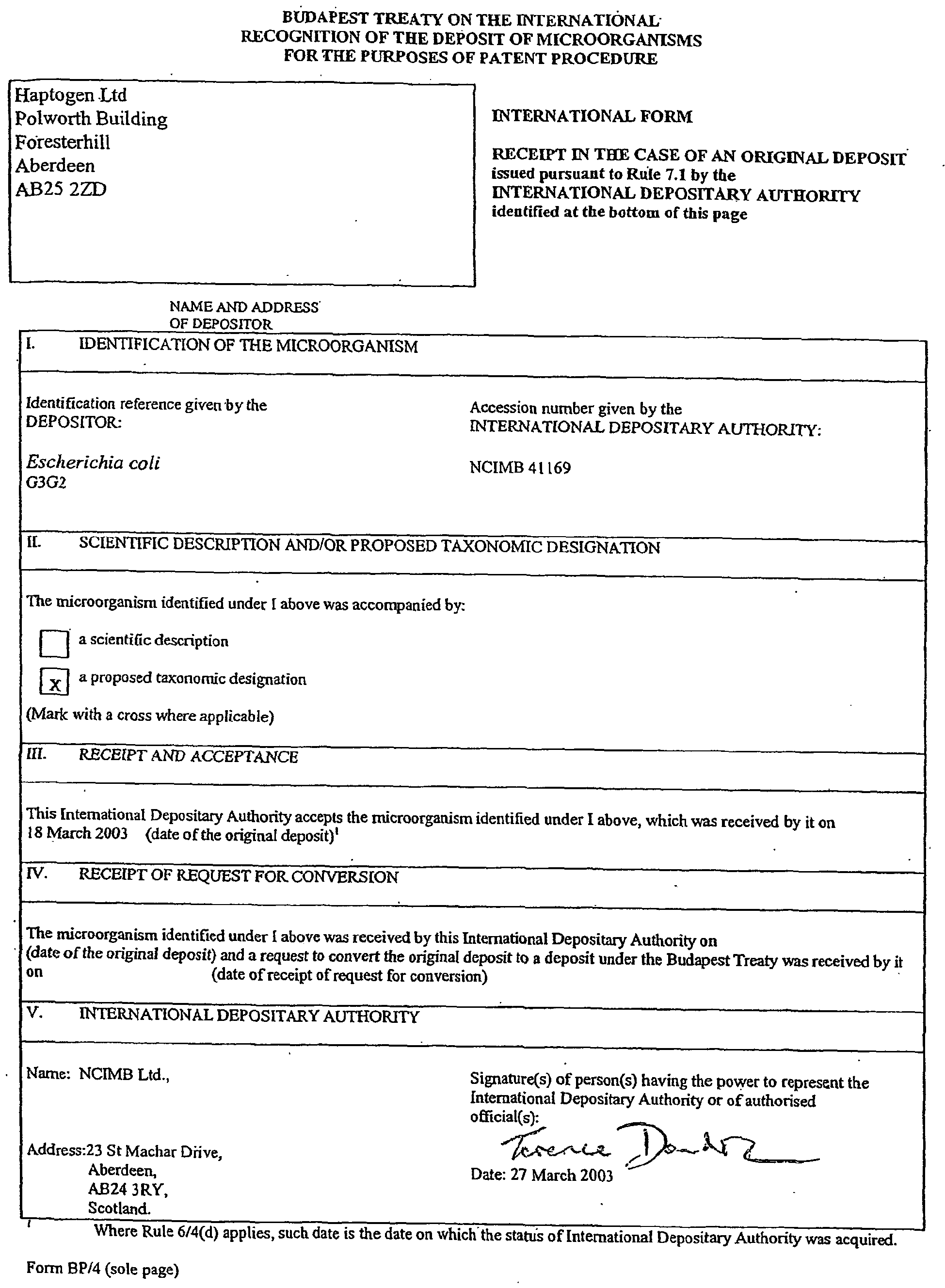 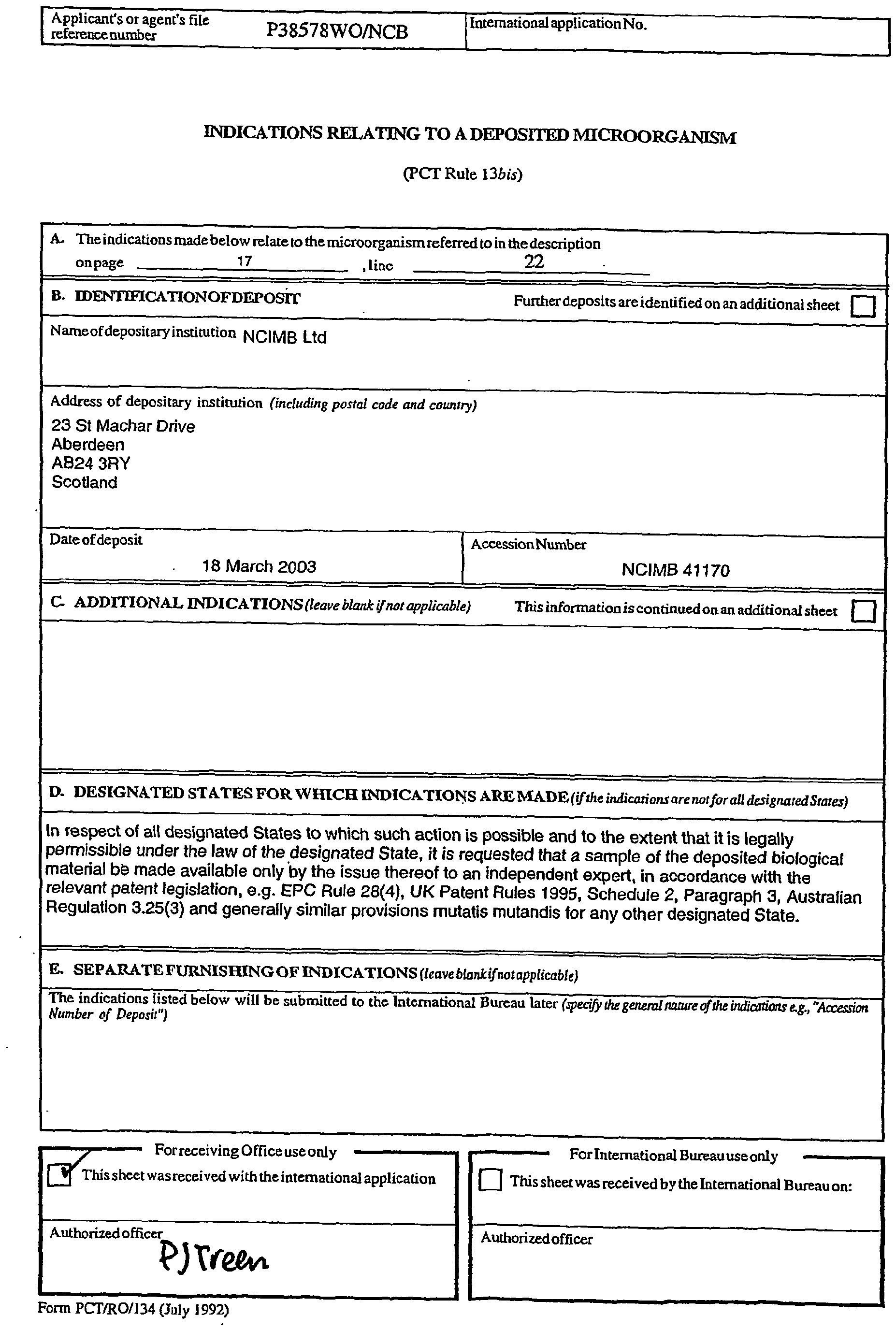 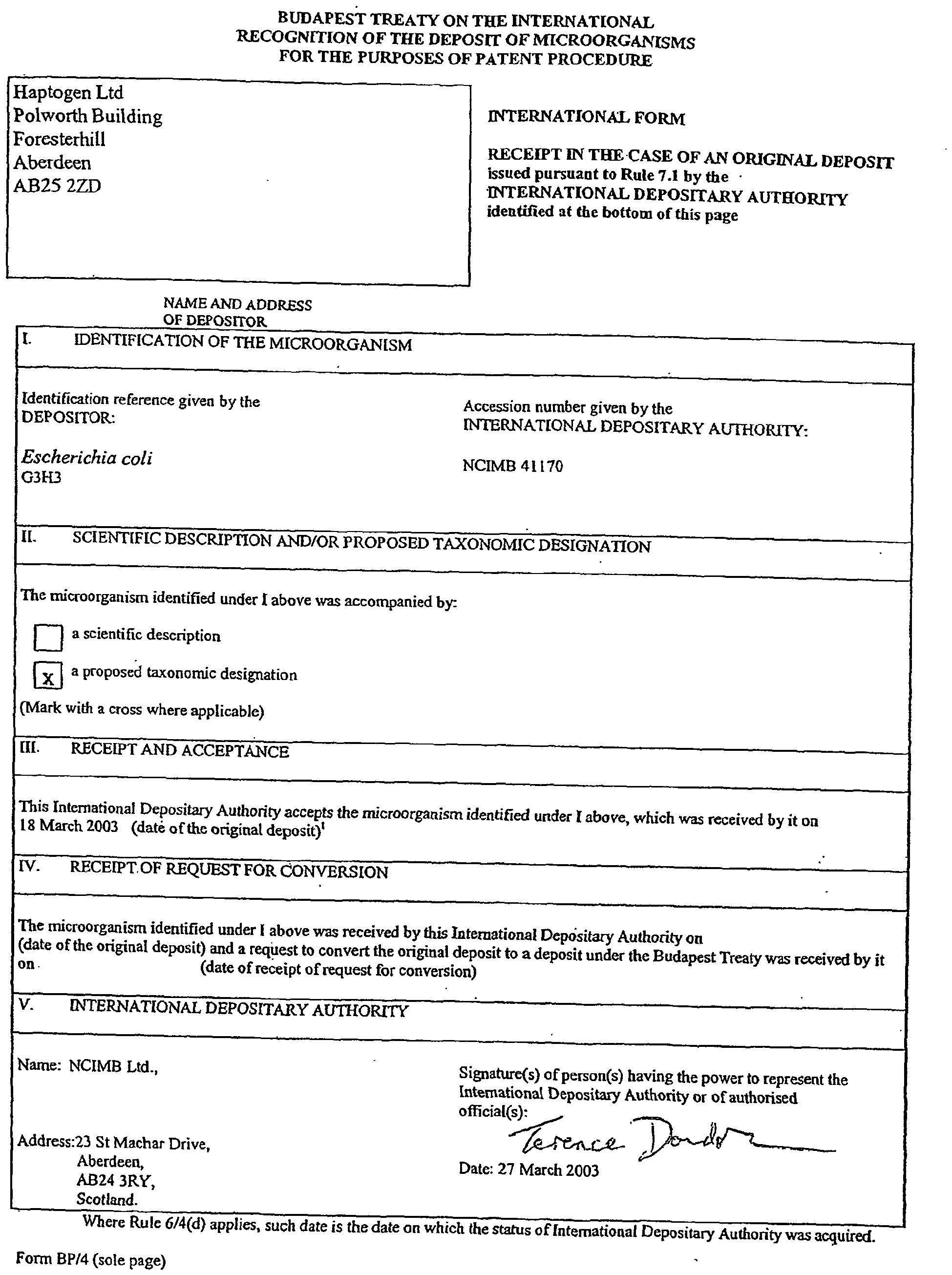 6. A method as claimed in claim 2, in which the lactone signal molecule is OdDHL and/or BHL.

7. A method as claimed in any one of claims 1 to 6, in which the quinolone signal (QS) signal molecule is a molecule of general formula (IV):

R3 is -H, or alternatively, the nitrogen atom (N) is unsubsituted.

8. A method as claimed in claim 7, in which the quinolone signal molecule of general formula (IV) is

11. A method as claimed in any one of claims 1 to 10, in which the antibodies are monoclonal or polyclonal antibodies, or fragments thereof. 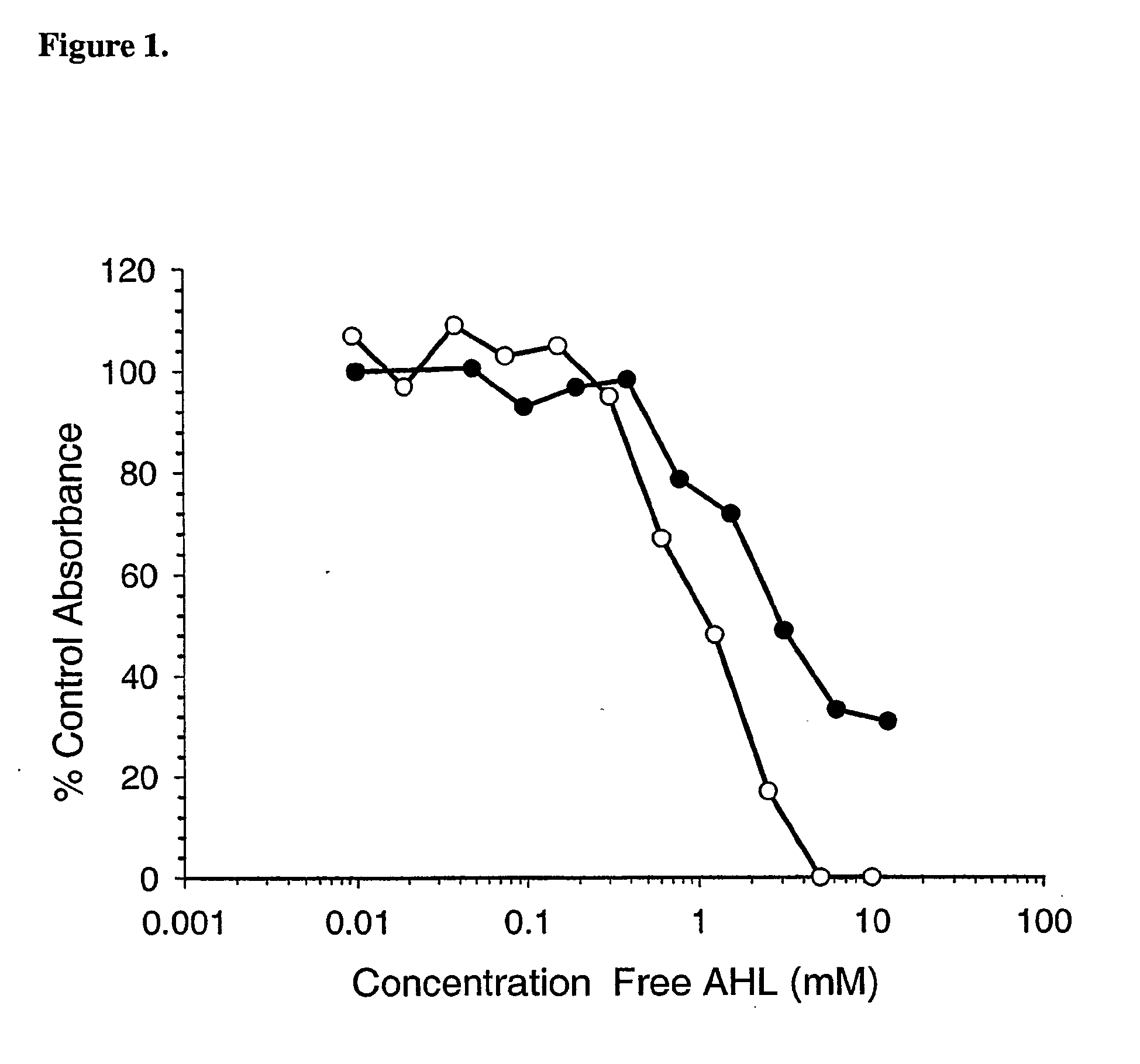 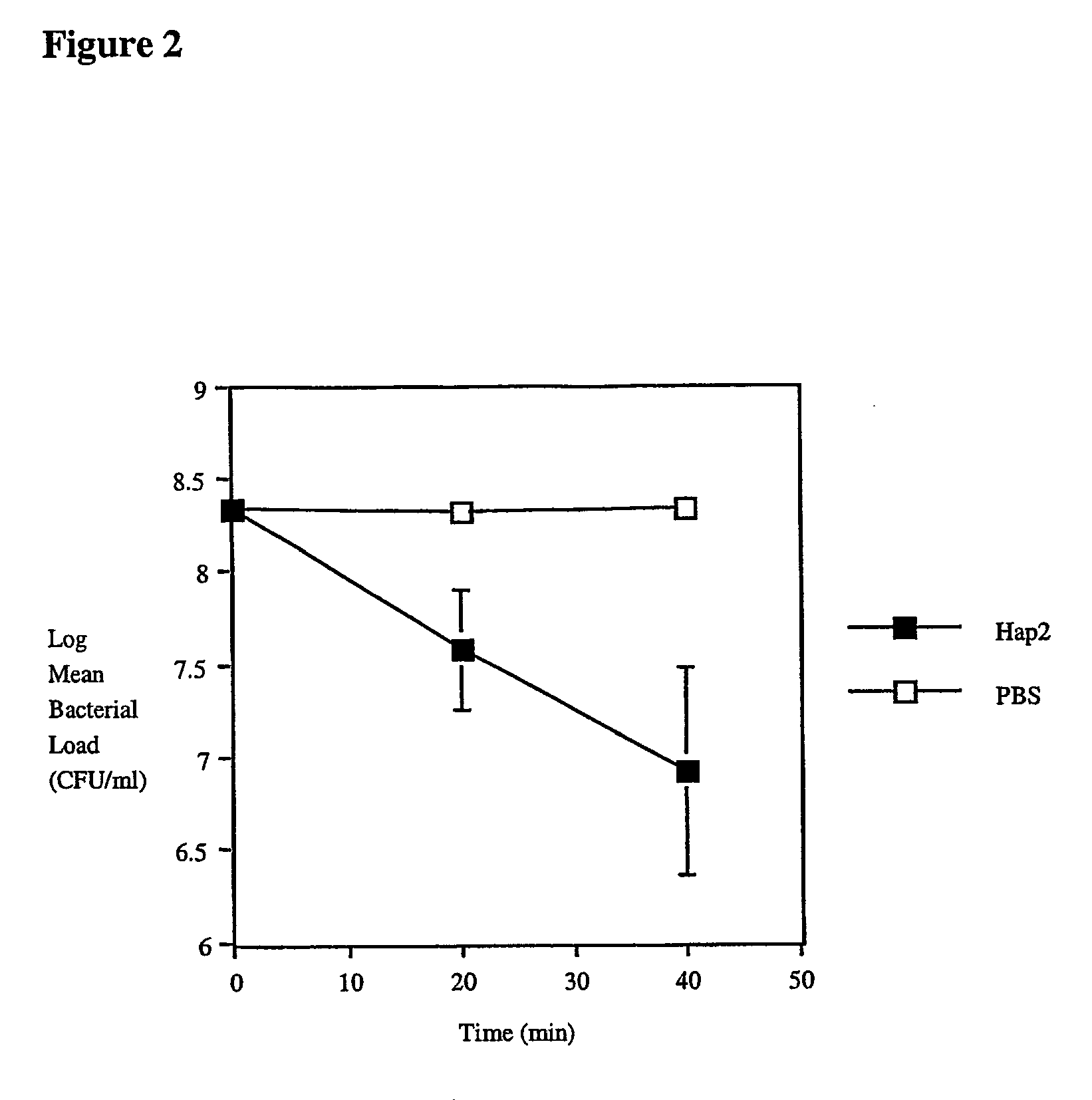 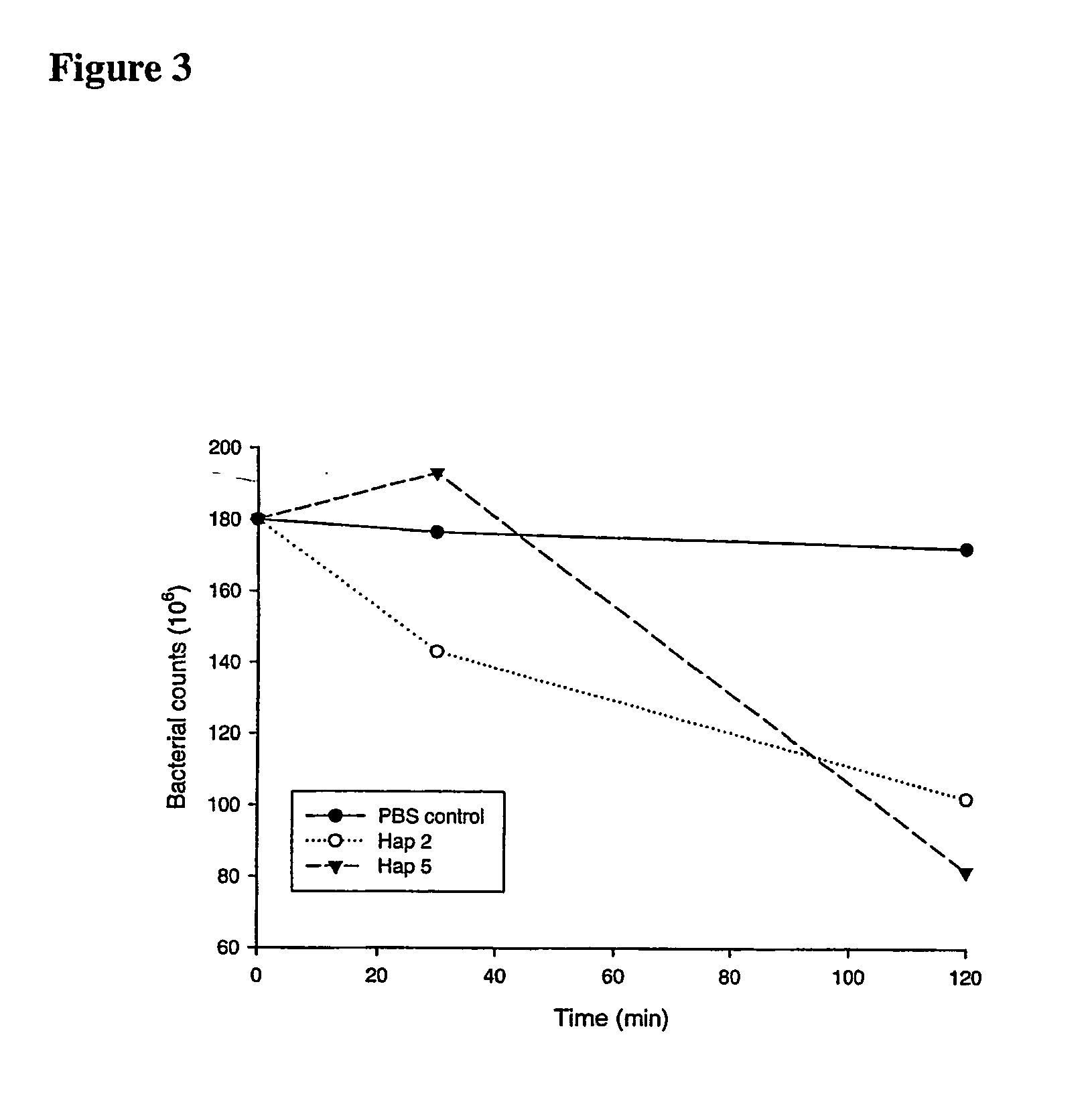 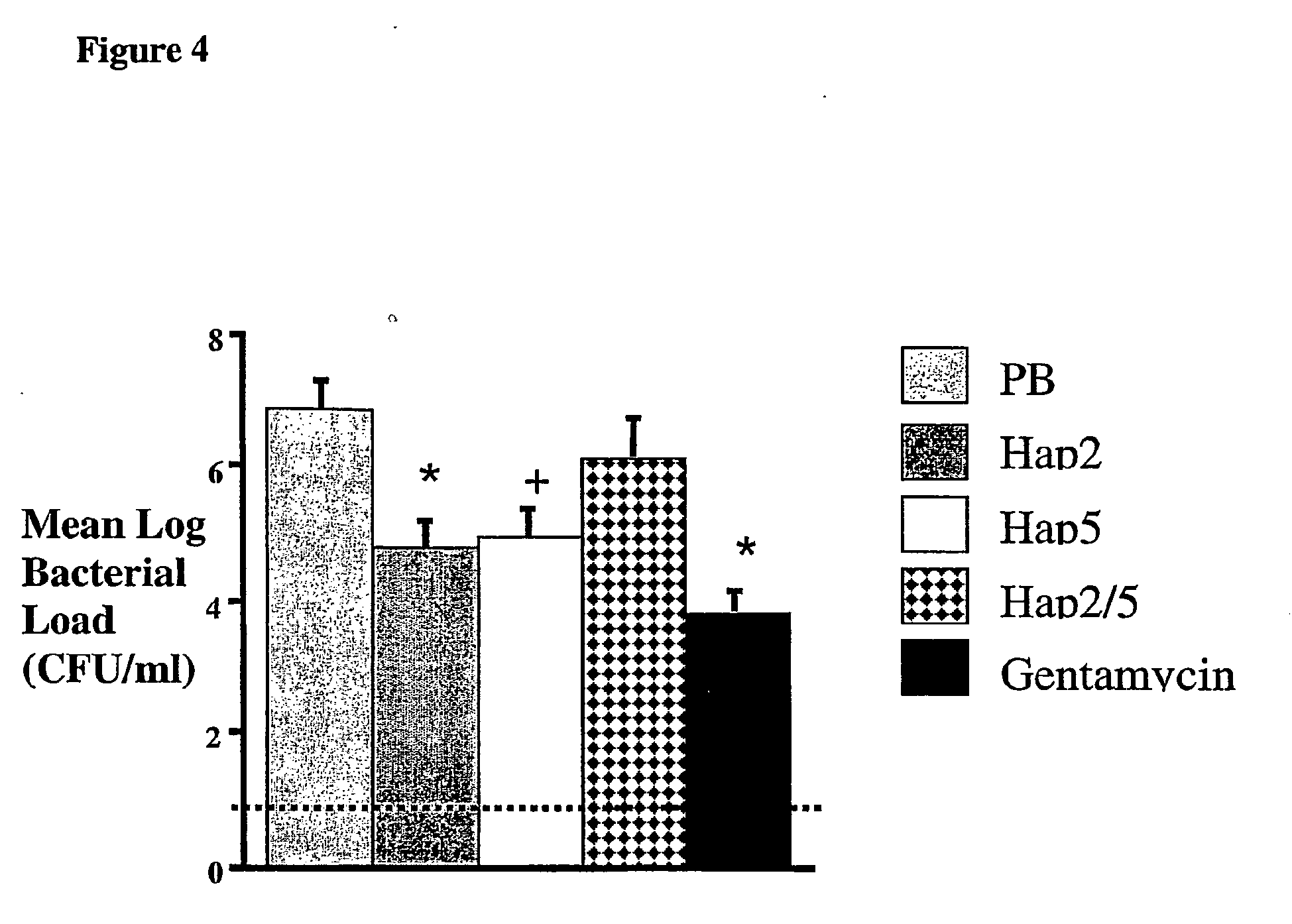 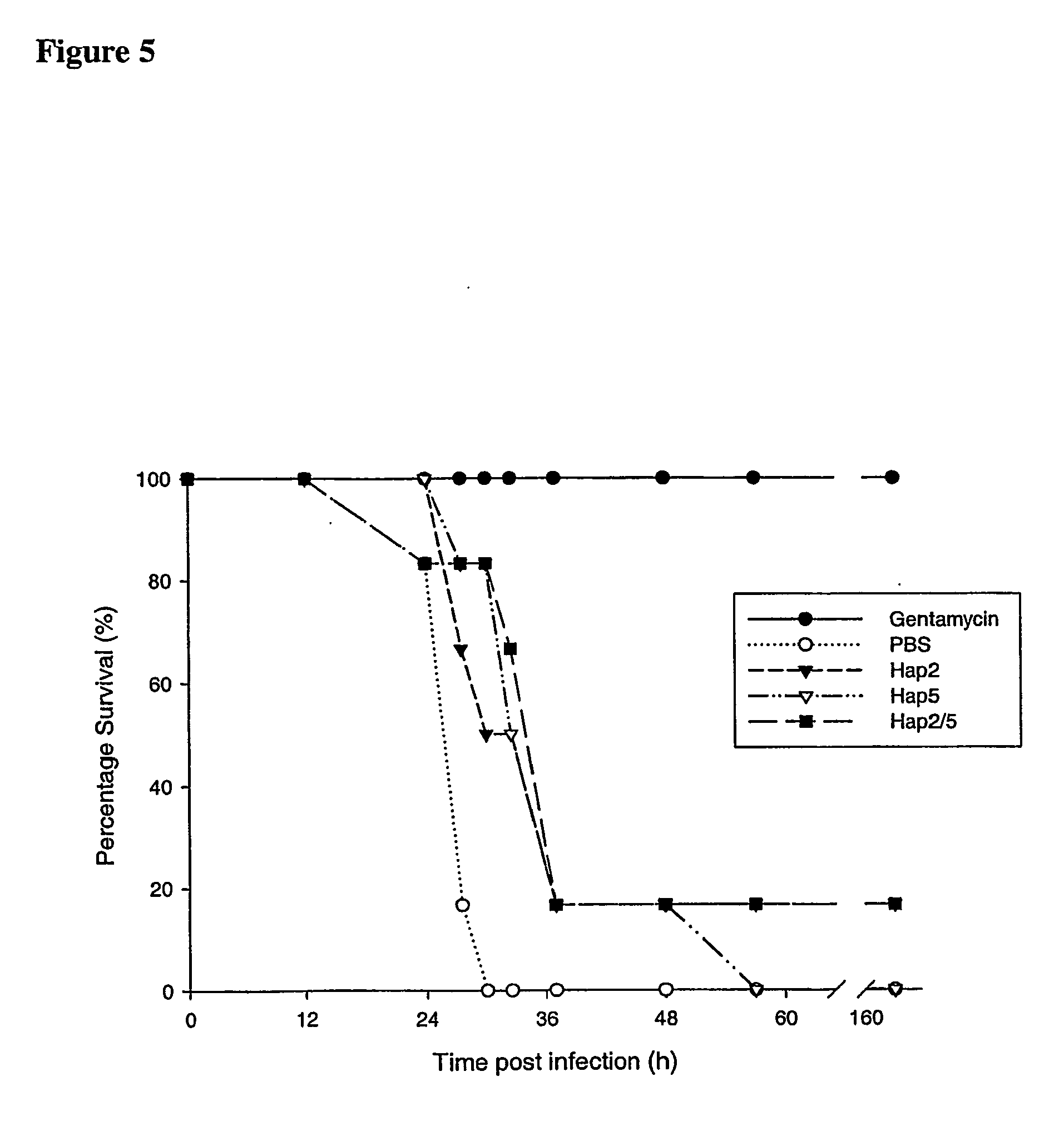 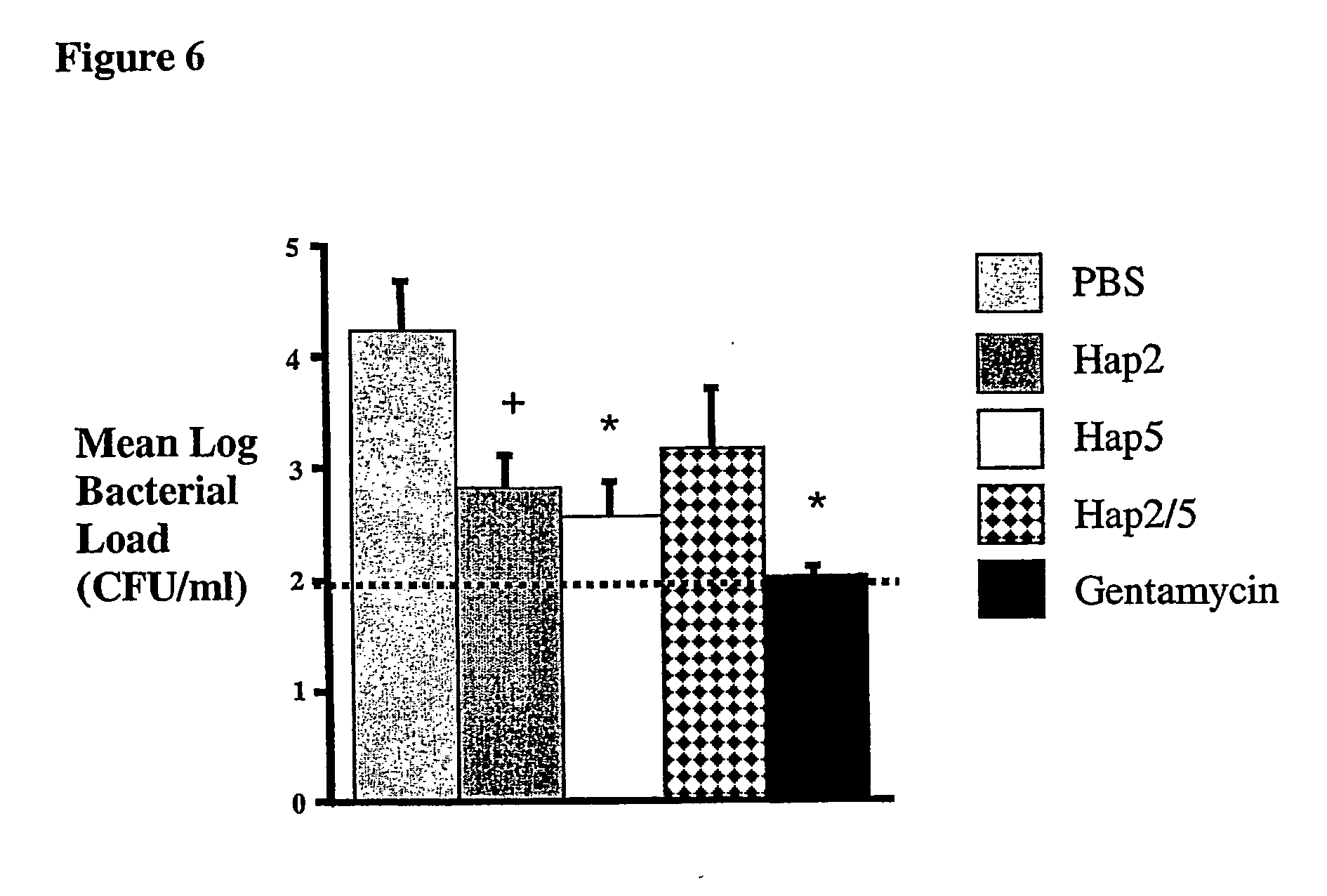 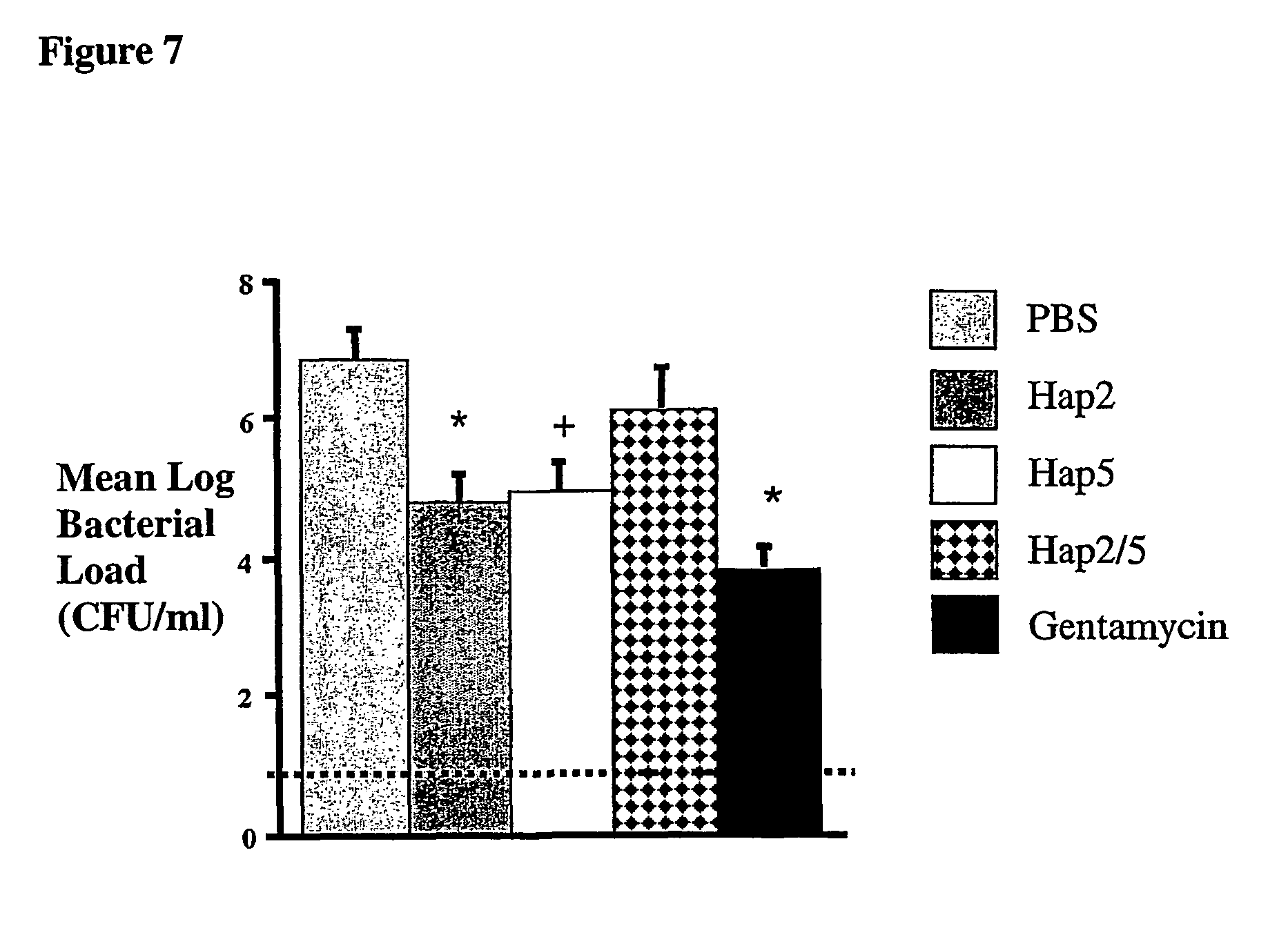 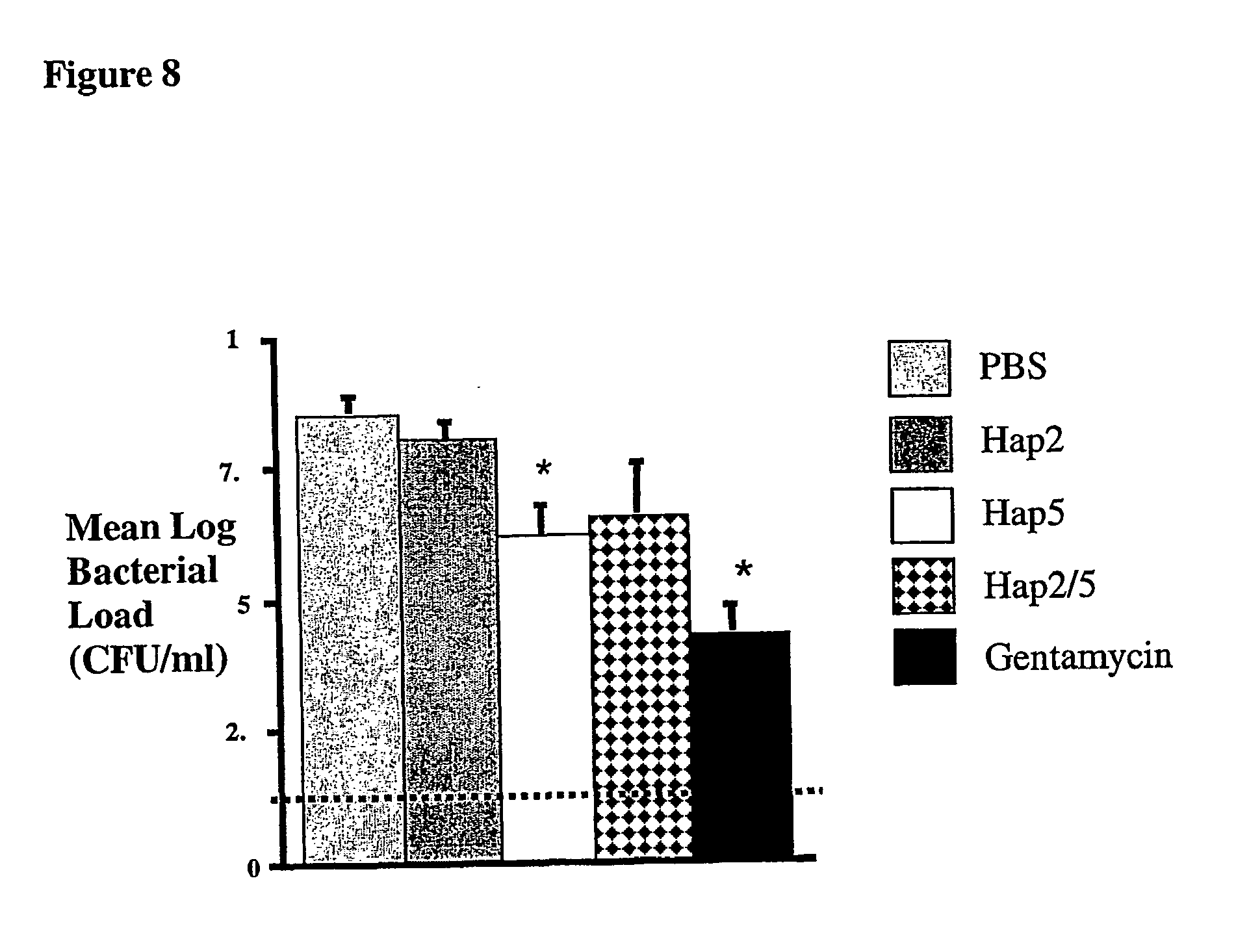