[0003] Various plate structures have been realized for the fixation of the fractures in the human body. The fractures are encountered in the human body for various reasons. Metal plates are frequently used for the treatment of said fractures. When its historical development is examined, the plates have widely been used in the fracture fixation since the beginning of this century. The plates used in the fracture fixation usually result in recovery. However, the use of the metal plates leads to some problems and recovery becomes delayed or is never achieved, due to numerous reasons in some cases.
[0004] Since 1970's, 316 L had widely been used as the steel material, then various materials were tried for application, such as titanium and the alloys thereof. However, as in the steel material, some problems were encountered also in the case of titanium alloys. The efforts have been made to develop the plates with such material and shape to fit the load to be imparted on said plate at the place where they will be used in the human body. For example, the plates for use in lower extremity is preferred to have a thick and strong material, while a thinner material resistant to less load is preferred for the upper extremity.
[0005] Although 316 L steel material has its advantages since it can bear many various loads imparted on the bone until the knitting of the fracture has been achieved, owing to its elasticity module being about 200 GPa, based on the knowledge that the elasticity module is about 20 GPa for the bone cortex, there is a phenomenon we call stress shielding leading to the weakening of the bone, where 316 L steel bears many loads exerted on the body.
[0006] Different materials have been used. Regarding the form, there are many plate designs available.
[0007] There also exist many studies where efforts have been shown to alter the surface properties of the material, in a view to increase its bio-compatibility and the durability.
[0008] Despite the use of many forms and different materials, for which there are efforts to improve, 316 L is still the most preferred material owing to such factors as its ease of technical processing and its cheap price.
[0009] The prior art which is considered to be relevant is mentioned as follows:

The Object of the Invention

Figure-1 is the front sectional view of the plate according to an illustrative embodiment of the invention.

Figure-2 is the view of the different application of the plate to the fracture line depending on the hole location and quantity, according to an illustrative embodiment of the invention.

2. A plate according to claim 1, characterized in that said lower body (2) comprises on its side facing the fixation body (1) at least one thrust part (2.2) in the form of a projection. 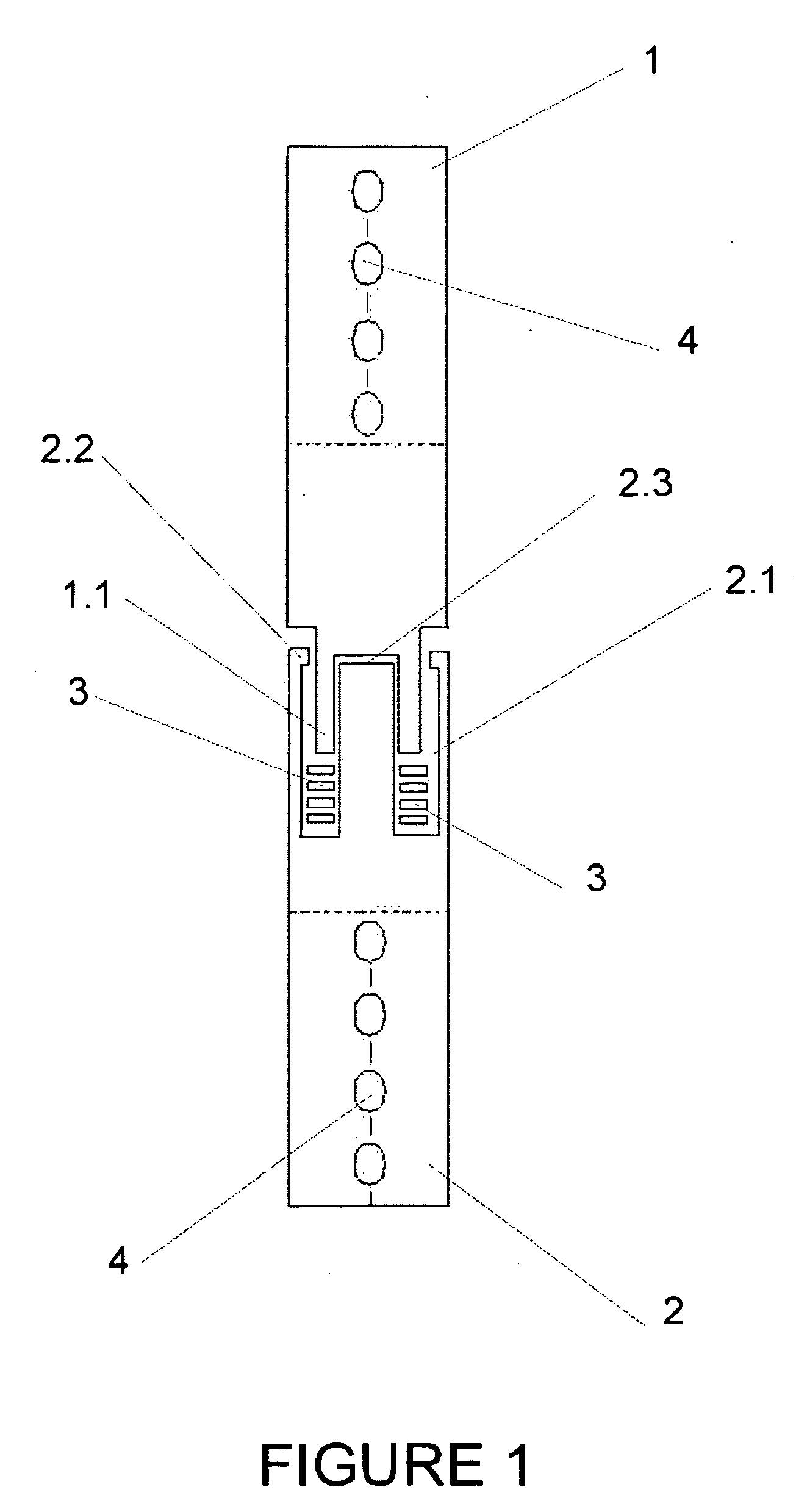