[0002] Endoscopic and laparoscopic surgical instruments are often preferred over traditional open surgical devices since a smaller incision tends to reduce the post-operative recovery time and complications. The use of laparoscopic and endoscopic surgical procedures has been relatively popular and has provided additional incentive to develop the procedures further. In laparoscopic procedures, surgery is performed in the interior of the abdomen through a small incision. Similarly, in endoscopic procedures, surgery is performed in any hollow viscus of the body through narrow endoscopic tubes inserted through small entrance wounds in the skin.
[0003] Laparoscopic and endoscopic procedures generally require that the surgical region be insufflated. Accordingly, any instrumentation inserted into the body must be sealed to ensure that gases do not enter or exit the body through the incision. Moreover, laparoscopic and endoscopic procedures often require the surgeon to act on organs, tissues and/or vessels far removed from the incision. Thus, instruments used in such procedures are typically long and narrow while being functionally controllable from a proximal end of the instrument.
[0004] Significant development has gone into a range of endoscopic surgical instruments that are suitable for precise placement of a distal end effector at a desired surgical site through a cannula of a trocar. These distal end effectors engage the tissue in a number of ways to achieve a diagnostic or therapeutic effect (e.g., endocutter, grasper, cutter, staplers, clip applier, access device, drug/gene therapy delivery device, and energy device using ultrasound, RF, laser, etc.).
[0005] Known surgical staplers include an end effector that simultaneously makes a longitudinal incision in tissue and applies lines of staples on opposing sides of the incision. The end effector includes a pair of cooperating jaw members that, if the instrument is intended for endoscopic or laparoscopic applications, are capable of passing through a cannula passageway. One of the jaw members receives a staple cartridge having at least two laterally spaced rows of staples. The other jaw member defines an anvil having staple-forming pockets aligned with the rows of staples in the cartridge. The instrument includes a plurality of reciprocating wedges which, when driven distally, pass through openings in the staple cartridge and engage drivers supporting the staples to effect the firing of the staples toward the anvil.
[0006] Recently, an improved "E-beam" firing bar was described for a surgical stapling and severing instrument that advantageously included a top pin that slides within an internal slot formed in the upper jaw (anvil) and has a middle pin and bottom foot that slides on opposite sides of a lower jaw of an end effector, or more particularly a staple applying assembly. Distal to the middle pin, a contacting surface actuates a staple cartridge held within an elongate staple channel that forms the lower jaw. Between the contacting surface and the top pin, a cutting surface, or knife, severs tissue clamped between the anvil and the staple cartridge of the lower jaw. Since both jaws are thus engaged by the E-beam, the E-beam maintains a desired spacing between the jaws to ensure proper staple formation. Thus, if a lesser amount of tissue is clamped, the E-beam holds up the anvil to ensure sufficient spacing for the staples to properly form against an undersurface of the anvil. In addition, if a greater amount of tissue is clamped, the E-beam draws down the anvil to ensure that the spacing does not exceed the length of the staple such that ends of each staple are not sufficiently bent to achieve a desired degree of retention. Such an E-beam firing bar is described in U.S. Pat. Appln. No. 10/443,617, entitled "Surgical Stapling Instrument Incorporating an E-Beam Firing Mechanism", filed on May 20, 2003, and in the European Pat. Appln. No. EP-1 479 346-A1.
[0007] While an E-beam firing bar has many advantages for a surgical stapling and severing instrument, often it is desirable to sever and staple tissue of various thicknesses. A thin layer of tissue may result in staples that only form loosely, perhaps requiring the need for bolstering material. A thick layer of tissue may result in formed staples that exert a strong compressive force on the captured tissue, perhaps resulting in necrosis, bleeding or poor staple formation/retention. Rather than limiting the range of tissue thicknesses that are appropriate for a given surgical stapling and severing instrument, it would be desirable to accommodate a wider range of tissue thickness with the same surgical stapling and severing instrument.
[0008] Consequently, a significant need exists for an improved surgical stapling and severing instrument that incorporates a staple applying assembly (end effector) that adjusts to the amount of tissue that is clamped.

[0009] The invention overcomes the above-noted and other deficiencies of the prior art by providing a surgical instrument that incorporates a firing bar as defined by the claims that translates through a staple applying assembly having a lower jaw and a pivotally attached upper jaw, engaging each to assist in maintaining the desired spacing between inner surfaces that compress tissue in between. Advantageously, the distance between the two jaws is allowed to flex apart slightly to allow for a larger thickness of compressed tissue, yet the firing bar prevents excessive flexure that would exceed the limits on the device to form staples through the compressed tissue. Thereby, enhanced clinical flexibility is achieved with the same surgical instrument being suitable for a larger range of surgical procedures or to accommodate variations in the patient population.
[0010] These and other objects and advantages of the present invention shall be made apparent from the accompanying drawings and the description thereof.

FIG. 1 is a left side view in elevation of a surgical stapling and severing instrument with an open end effector (staple applying assembly) with a shaft partially cut away to expose a firing member of a proximal firing rod and distal firing bar guided by a frame ground and encompassed by a closure sleeve.

FIG. 2 is a left side view of a closed end effector (staple applying assembly) with a retracted force adjusted height firing bar of the surgical stapling and severing instrument of FIG. 1 taken in longitudinal vertical cross section along lines 2-2.

FIG. 3 is a left isometric view of the force adjusted (compliant) height firing bar of FIG. 2.

FIG. 4 is a left side view of a distal portion ("E-beam") of a first version of the force adjusted height firing bar of FIG. 2 having horizontal slits formed respectively between the top pin and cutting surface and between the middle pin and the cutting surface to enhance vertical flexure.

FIG. 5 is a lower left isometric view of a distal portion ("E-beam") of a second version of the force adjusted firing bar of FIG. 2 having a relieved lower area of an upper pin to enhance vertical flexure.

FIG. 6 is a front view in elevation of an upper portion of the E-beam of FIG. 5 taken in vertical and transverse cross section through the upper pin along lines 6-6.

FIG. 7 is a front view of an upper portion of a third version of the E-beam of FIG. 5 taken in vertical and transverse cross section along lines 6-6 but further including relieved upper root attachments of the top pin for enhanced vertical flexure.

FIG. 8 is a front view of an upper portion of a fourth version of the E-beam of FIG. 5 taken in vertical and transverse cross section along lines 6-6 but including a resilient inner vertical laminate layer instead of a relieved undersurface of the top pin for enhanced vertical flexure.

FIG. 9 is a front view of an upper portion of a fifth version of the E-beam of FIG. 5 taken in vertical and transverse cross section along lines 6-6 but including an upper pin formed of a resilient material instead of a relieved undersurface of the upper pin for enhanced vertical flexure.

FIG. 10 is an upper left isometric view of a distal portion ("E-beam") of a sixth version of the force adjusted firing bar of FIG. 2 having resilient material upon a bottom foot to enhance vertical flexure.

FIG. 11 is a front view in elevation taken in vertical and transverse cross section through the padded lower foot of the end effector (staple applying assembly) of the surgical stapling and severing instrument of FIG. 1.

FIG. 12 is a left view in elevation of a distal portion ("E-beam") of a seventh version of the force adjusted firing bar of FIG. 2 having a proximally and upwardly extended spring arm attached to a lower foot to enhance vertical flexure.

FIG. 13 is a left top isometric view of a distal portion ("E-beam") of an eighth version of the force adjusted firing bar of FIG. 2 having a spring washer encompassing a lower foot to enhance vertical flexure.

an anvil (20) pivotally attached to the elongate staple channel to grip tissue and having a staple forming undersurface (60) with a longitudinal anvil slot (58) formed therein;

a staple cartridge (42) having an upper surface and received in the elongate staple channel and containing a plurality of staples each having a staple length sized for forming a closed staple between a first height and a second height;

an elongate shaft (18) attached to the staple channel;

a handle (12) proximally operatively coupled through the elongate shaft to close the anvil and to clamp tissue between the anvil and the staple cartridge to a clamped tissue thickness; and

a firing bar (36) translated by the handle and received for longitudinal reciprocating motion in the elongate shaft, the firing bar comprising:

an upper lateral surface (54) extending from the vertical portion positioned to exert an inward compressive force on the anvil during firing translation,

a lower lateral surface (70) extending from the vertical portion positioned to exert an inward compressive force on the elongate staple channel during firing translation, and

a resilient portion of the firing bar positioned to allow a height between the staple forming undersurface of the anvil and the upper surface of the staple cartridge to vary between the first and second heights in relation to the clamped tissue thickness, characterized in that the surgical instrument further comprises a resilient member (150, 160, 170) attached to an inner surface of a selected one of a group consisting of the upper lateral surface and the lower lateral surface. 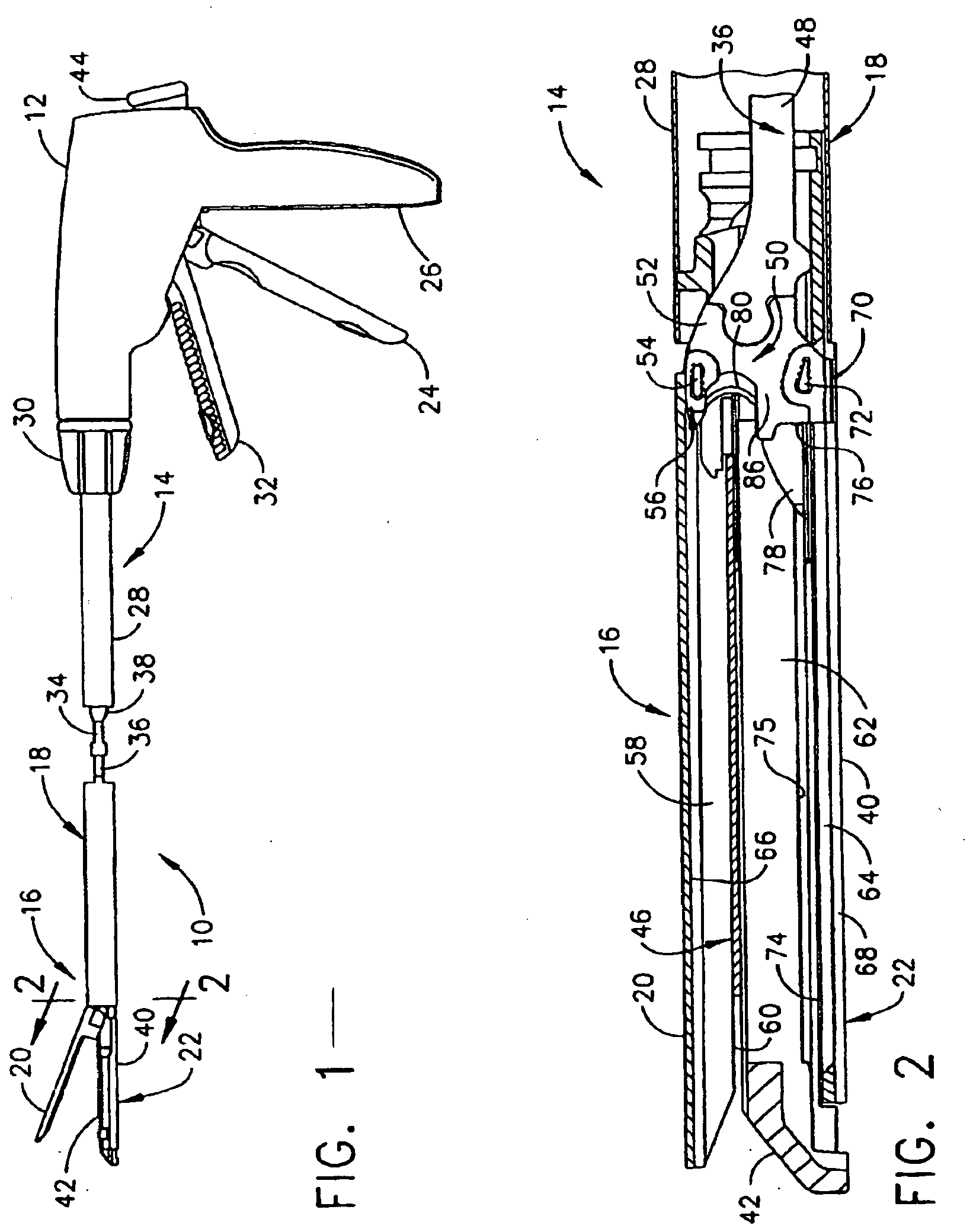 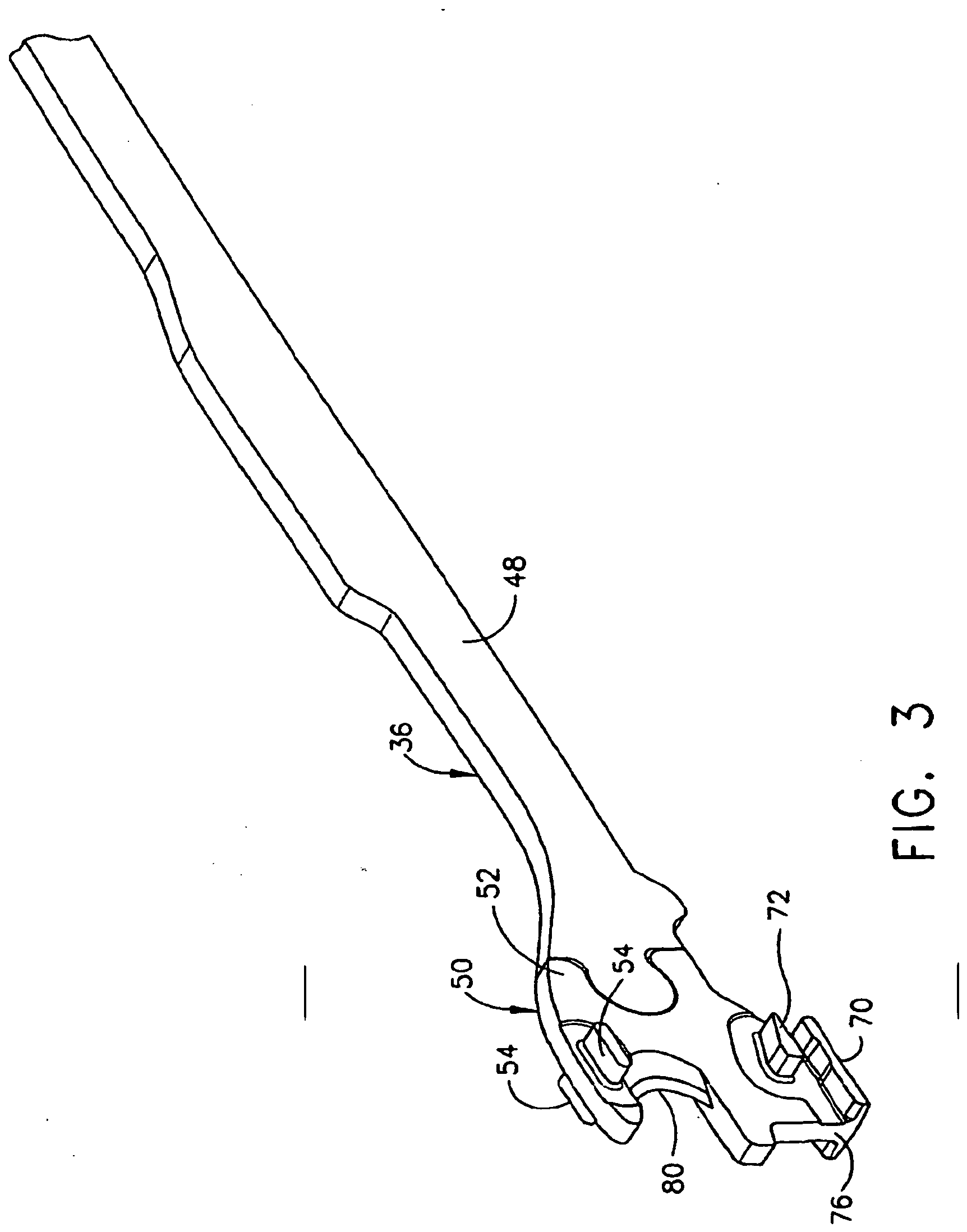 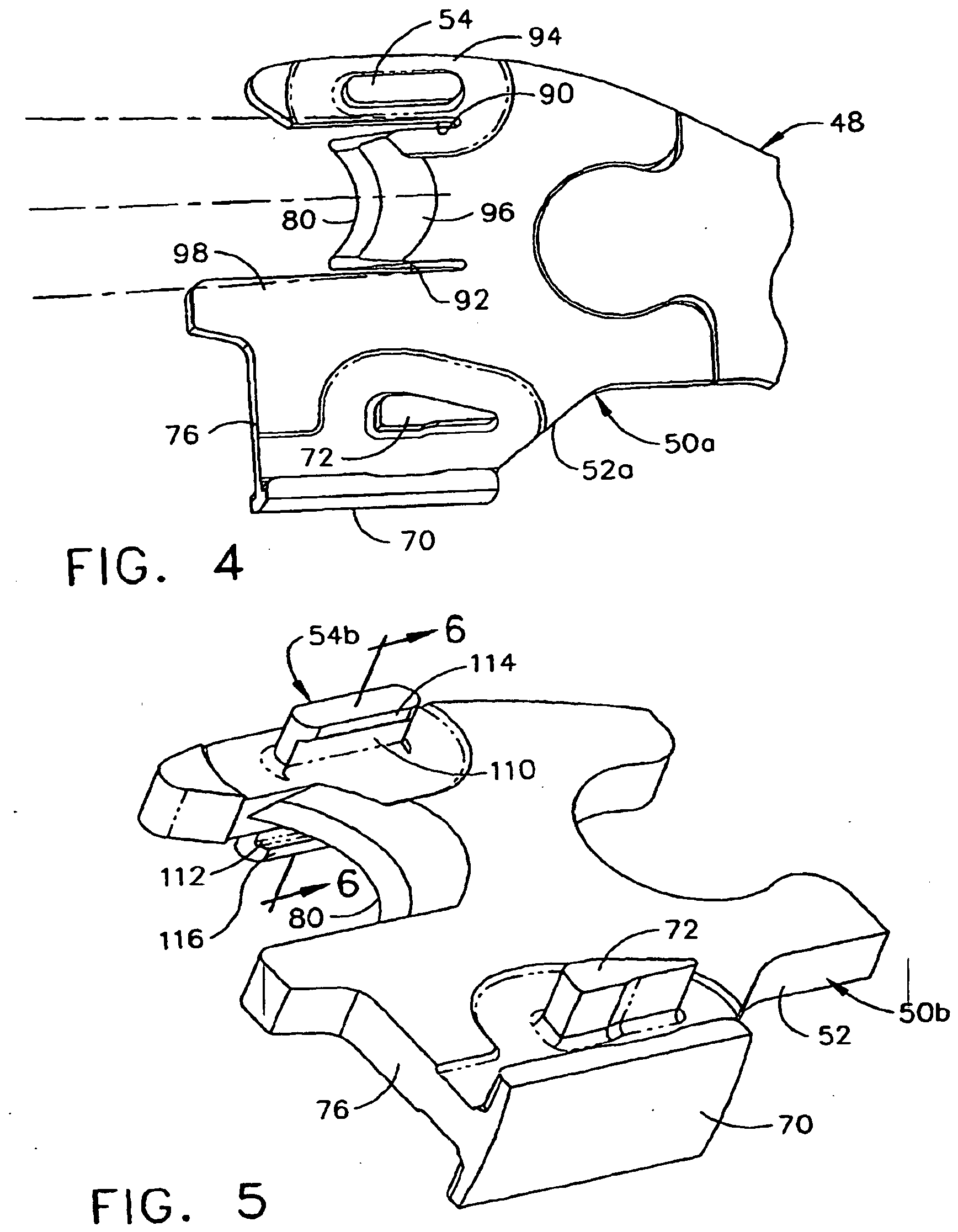 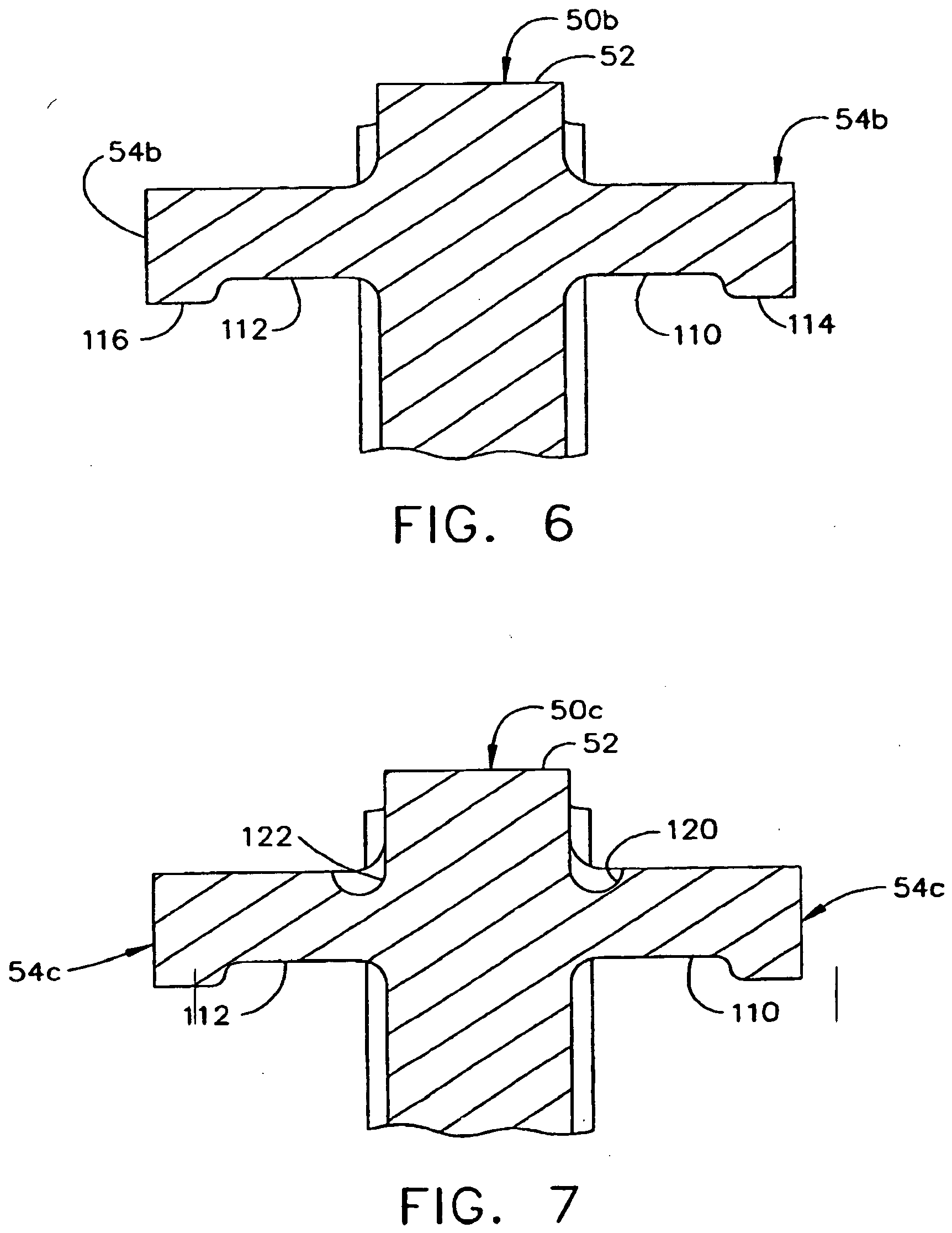 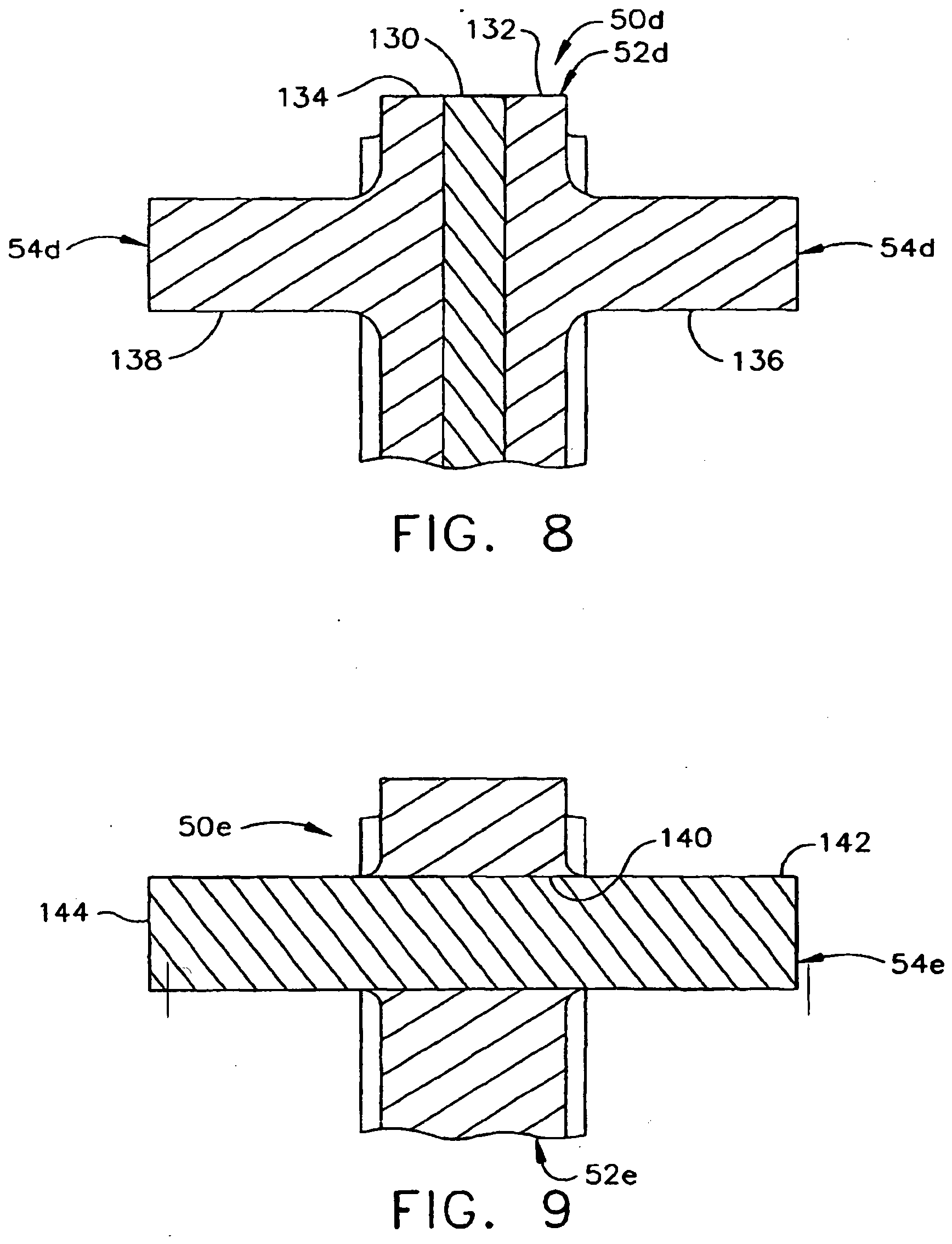 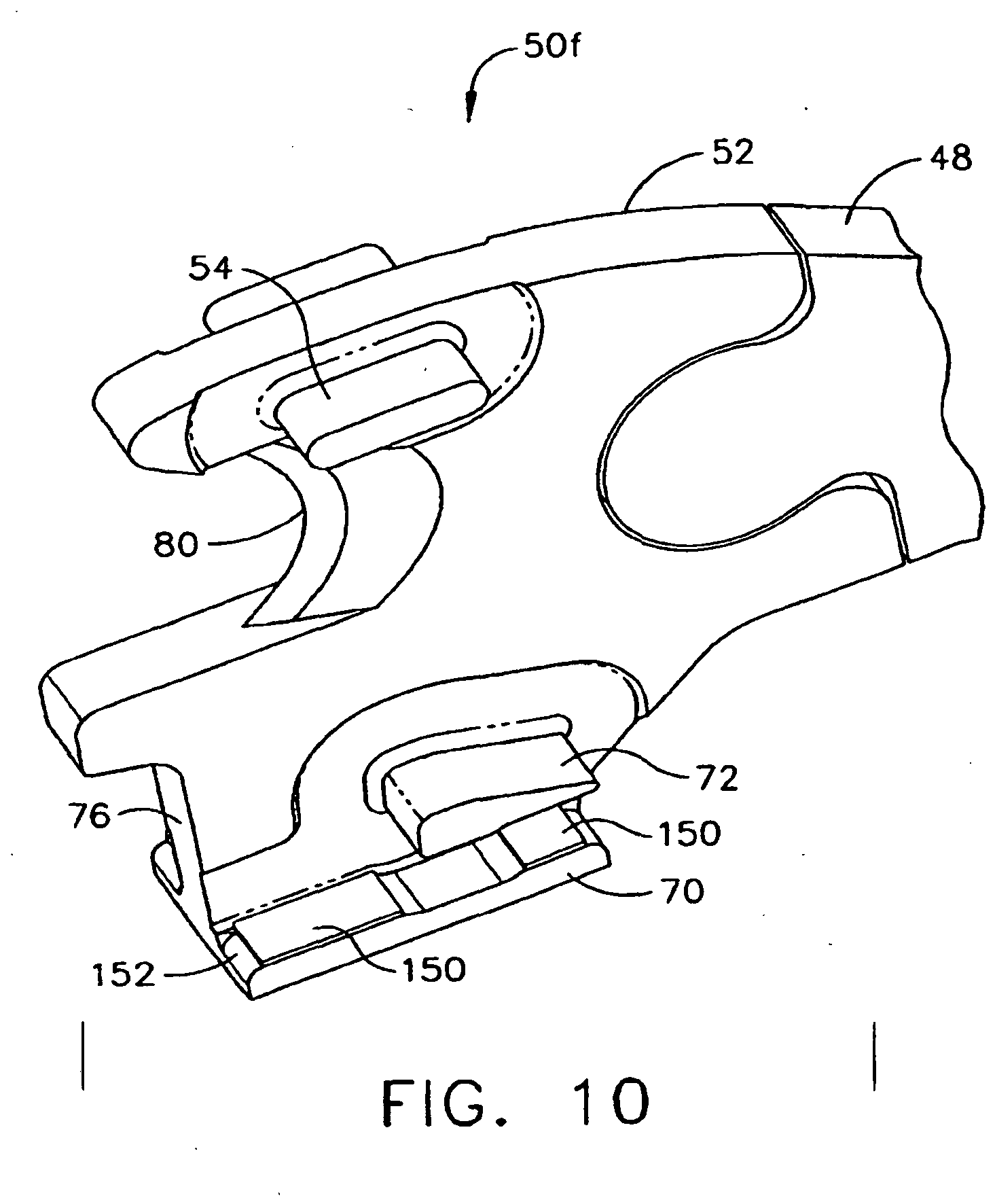 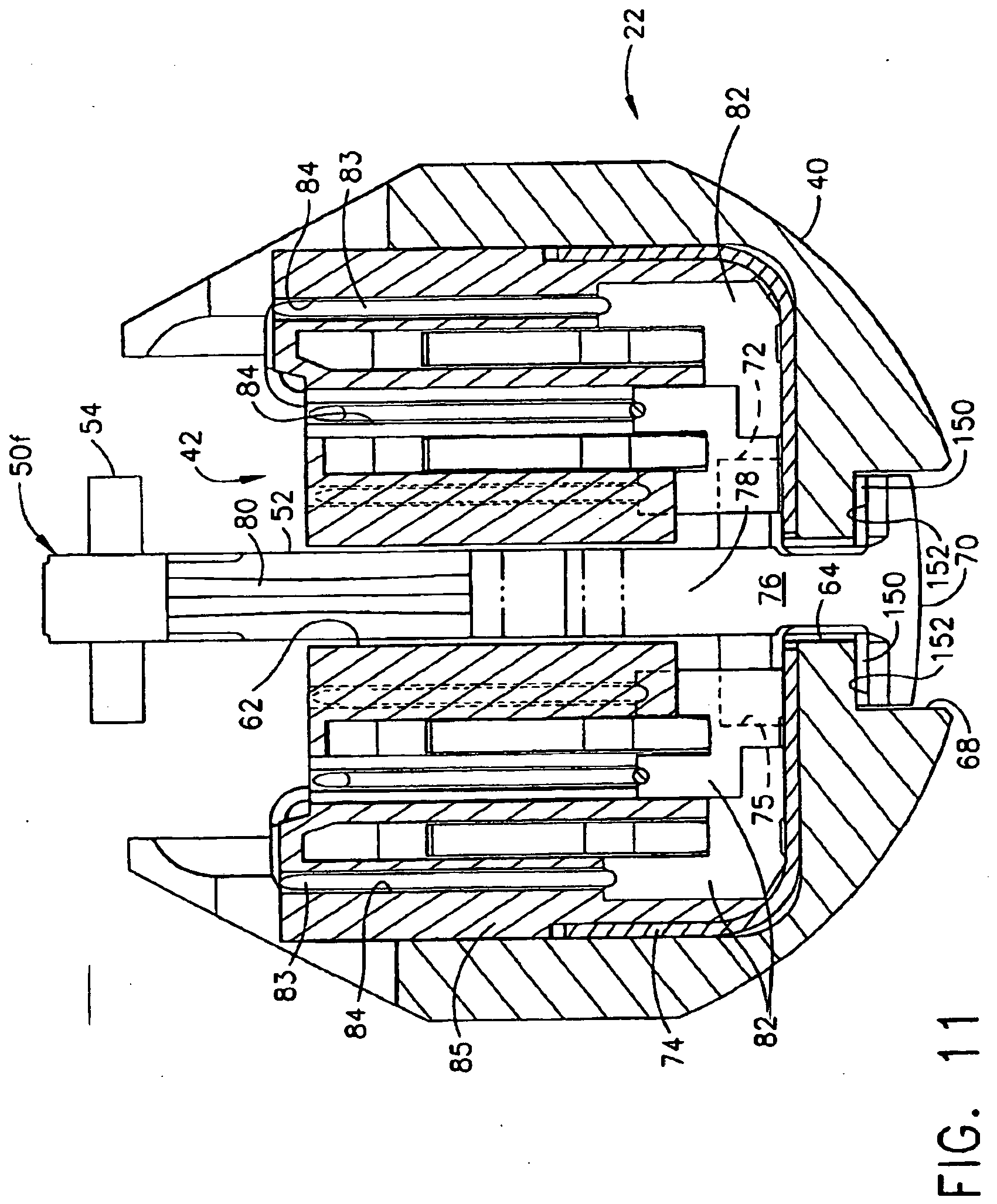 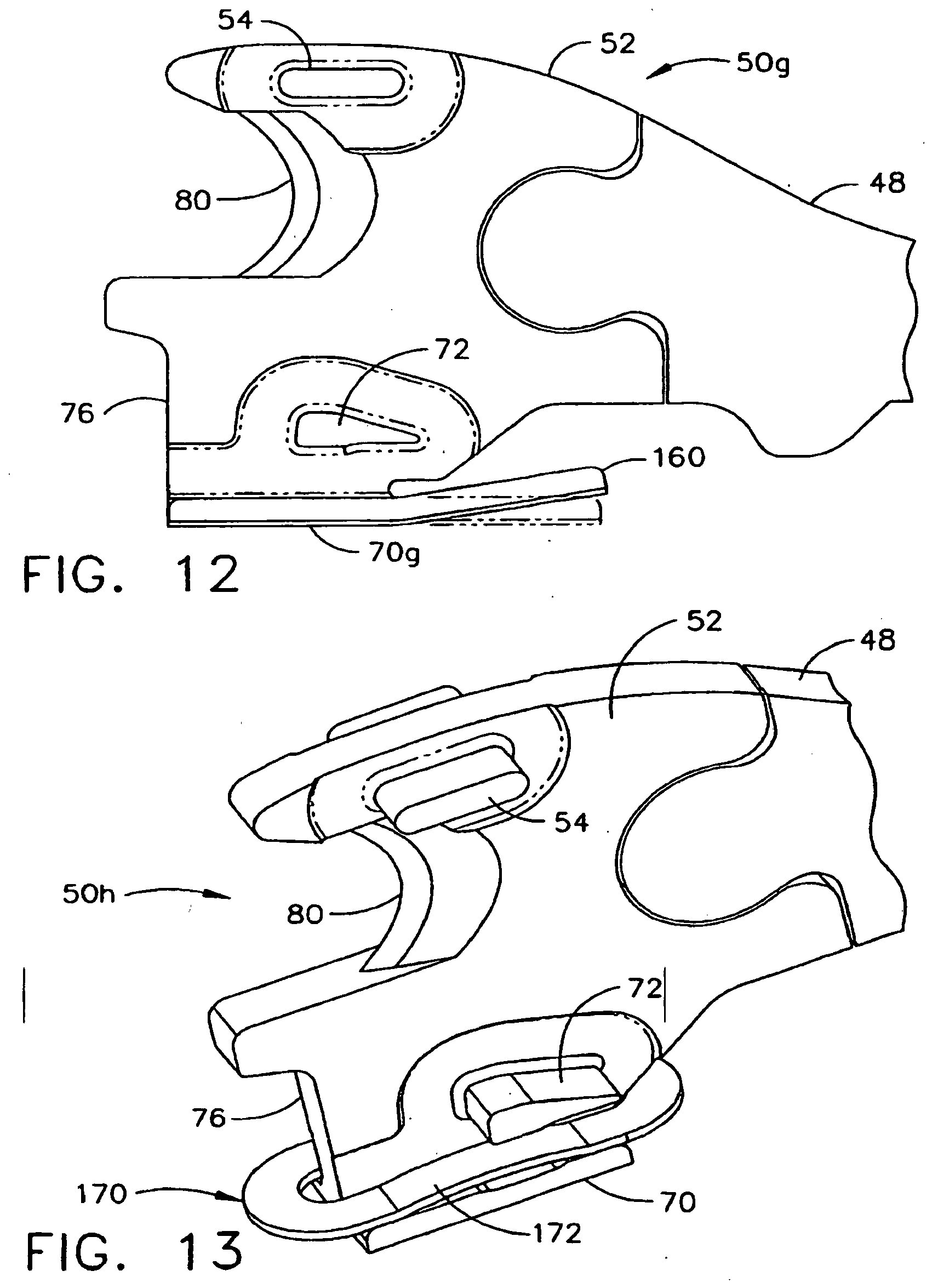