[0001] The field of the invention is dispensers for chemical concentrates, and particularly the dispensing of chemical concentrates, from a container, which can cause an increase in pressure in the container.
[0002] Dispensers of the type concerned with in this invention are disclosed in U.S. Patent No. 6,708,901, which teachings are incorporated herein. The dispensing apparatus disclosed in this patent can control the flow of carrier liquid and chemical product in a precise and controlled manner. However, there are instances where the chemical product which is stored in the container from which the chemical product is dispensed can cause an increase in pressure. If the contents of the container are not vented, a problem can arise.
[0003] Vented type dispensers are disclosed in U.S. Patents No. 1,638,550 and No. 3,157,360. Venting systems for containers are described in U.S. Patents No. 4,993,602 and No. 6,196,409.
[0004] US2002008161 discloses a sprayer head for attachment to a container containing a chemical product to be diluted by a carrier stream. The sprayer head includes a vent channel that allows air to enter the container to displace the dispensed liquid chemical and prevent collapse of the walls of the container upon dispensing. US2002092925 discloses a dispenser for mixing and dispensing a liquid chemical concentrate with a diluent from a container. The body member of the dispenser includes a product passage and a vent passage.
[0005] The prior art does not provide a venting of excess pressure from a container which is employed in conjunction with a dispenser employing an eductor. Neither does the prior art provide such a venting of excess pressure from a dispenser which includes an air vent passage that is closed when the dispenser is not in operation.

BRIER DESCRIPTION OF THE DRAWINGS

FIG. 1 is a perspective view of the dispenser of this invention in conjunction with a container;

FIG. 2 is a view in side elevation of the dispenser shown in FIG. 1;

FIG. 3 is a cross-sectional view of the dispenser shown in FIG. 1 illustrating a vent;

FIG. 4 is a bottom view of the dispenser shown in FIG. 1 illustrating the vent as well as an air passage and the passage for a dip tube;

FIG. 5 is an exploded view of the component parts of the dispenser;

FIG. 6 is a cross-sectional view of the dispenser in a closed position;

FIG. 7 is a view similar to FIG. 4 showing the dispenser in a low flow condition;

FIG. 8 is a view similar to FIG. 4 showing the dispenser in a high flow condition;

FIG. 9 is a cross-sectional view illustrating an indexing of an eductor in the dispenser;

FIG. 10 is a fragmentary view of the dispenser housing illustrating the eductor contact surfaces for limiting the movement thereof;

FIG. 11 is a cross-sectional view of the dilution adjustment member utilized in the dispenser; and

FIG. 12 is a cross-sectional view of a component of a flow control device employed in the dispenser.

[0019] Referring to FIGS. 1 and 2, the dispenser generally 10 has a body member 12 with a container connector 14 for connection to a container or bottle 16. A preferred connector system is more fully described in commonly owned patent application U.S. Serial No. 10/037,569 filed November 9, 2001 which teachings are incorporated herein by reference. At one end of the body member 12 is a hose attachment 18 for supplying pressurized water to the dispenser. A handle 17 is provided below attachment 18. At the other end there is the spout 22 and a nozzle 20 for dispensing a mixed chemical solution. A flexible tube 15 extends between nozzle 20 and spout 22.
[0020] As seen in FIGS. 3 and 4, there is a nipple 6 which provides connection to a dip tube 19 and an air or vent passage 25. The purpose of these is described later. There is also a vent member 7 which is of the liquid impervious but gas pervious type. It is available from W.L. Gore & Associates GmbH. The purpose is to allow gas to escape from container 16 when it is filled with a disinfectant cleaner which contains hydrogen peroxide. Oxygen gas can evolve and cause a problem with undesired expansion of the container 16. In the instance where chlorine bleach is employed, the evolved gas would be chlorine. Vent member 7 with the micro-porous member 9 is press fitted into the body member 12 by means of collar 5. Vent passageway 7a exits to the outside of body member 12 between the ribs 35 as indicated in FIG. 1.
[0021] As stated previously, the container connector 14 for connecting the body member 12 to the container 16 is more fully described in patent application U.S. Serial No. 10/037,569. It includes a fastening member 3, also indicated herein as cap 68, with threads 4 for connection to the threads 2 on the bottle neck 1. A gasket 8, also indicated herein as gasket 67, is preferably placed between the top of the bottle neck 1 and the body member 12.
[0022] Referring to FIGS. 5 and 6, the dispenser 10 includes an eductor generally 11 composed of the first or outer eductor part 24 with a diverging passage 24a and an inner second eductor part 26 with a converging passage 26a. They are slideably connected in body member 12 with seals 52 and 56 providing a fluid tight contact. A valve assembly 28 for controlling the flow of water through the dispenser 10 is also slideably housed in body member 12 and is in contact with eductor part 26. The hose attachment 18 is rotatably connected to body member 12 by the snap fitment 34. A back flow preventer 30 is positioned in hose attachment 18 and has a seal 32 for contact with body member 12. At the opposite end of body member 12, the nozzle 20 is attached to eductor part 24.
[0023] An annular groove 36 is provided in the eductor part 24 and accommodates a head portion 38 of the trigger 40 with flange portions such as shown at 42 on the trigger 40 having shafts (not shown) for extending into bores such as 44. A latch member 46 extends upwardly from the member 12 for fitment through the passage 48 of the trigger 40.
[0024] A dilution adjustment member 50 is connected to the eductor part 24 by means of the splines 47. This is shown in FIG. 11. It has L-shaped passages 90-94 for introducing chemical concentrate into the gap 27 between eductor parts 24 and 26. These passages 90-94 have different diameters or widths for metering different concentrations of chemical concentrate. In some instances there are no passages to provide a rinse function. A dip tube 19 is connected to body member 12 and extends into container 16 for siphoning chemical concentrate into the bore 13 of body member 12 by way of passage 21. The nipple 19 depicted in FIG 3 is not shown in FIGS. 4-8, nor is the gasket 8. A seal member 23 is placed between dilution adjustment member 50 and body member 12. A vent passage 25 connects container 16 and bore 13. The adjustment member 50 is positioned inside eductor 26. A spring 54 biases eductor part 26 as well as eductor part 24 toward the head portion 38 of trigger 40.
[0025] A quad O-ring 60 is attached in groove 57 of valve head portion 58. It serves as a flow control element as later explained. A valve member 28 with passages 33 has a head portion 58 with groove 59. A seal 66 is seated in groove 59 of head portion 58 and another seal 64 is placed on collar 62. A gasket 67 is provided for cap 68 and a hose seal is provided at 69.
[0026] Referring to FIG. 10, it is seen that body member 12 has a surface 79 for contact with contact member 29 of eductor 24 as well as a grooves 81 and 82 for the purpose of linearly positioning the eductors 24 and 26 and accordingly valve assembly when trigger 40 is depressed. A keyway 70 is disposed in body member 12 for accommodating a key member 76 (see FIG. 11) in eductor part 26 for allowing sliding but non-rotatable connection in body member 12. A second opposing keyway 80 is also disposed in body member 12 in conjunction with key member 84.
[0027] Referring to FIG. 9, there is shown the eductor 24 with notches 77. These accommodate the projections 75 on arms 72 and 73 extending from body member 12. This provides an indexing function in conjunction with the orientation of dilution adjustment member 50 and passage 21.

1. A dispenser (10) for dispensing different quantities of chemical concentrate into a stream of fluid from a concentrate container (16) comprising:

a body member (12) having a through bore with an inlet end adapted to be connected to a source of pressurized fluid at one end and an outlet at the opposite end;

a product passage (21) and a vent passage (25) communicating with the through bore and the container;

an eductor (11) mounted in the through bore;

a trigger member (40) constructed and arranged to slide the eductor (11) and open the vent passage (25);

a connector (14) for connecting the body member (12) to the container (16), the connector including a fastening member (3) or a cap member (68); the dispenser characterized by further comprising:

a vent member (7) connected to the body member (12) for relieving any excess pressure from the container (16), the vent member (7) being always in a gas open position even though the air vent passage (25) is closed.

2. The dispenser of Claim 1 wherein the vent member (7) is gas pervious and liquid impervious.

3. The dispenser of Claim 1 wherein the vent passage (25) is constructed and arranged to be in a closed position when the product passage (21) is closed.

4. The dispenser of Claim 1 wherein the eductor (11) is both slideable and rotatable.

5. The dispenser of Claim 1 further including a seal (23) constructed and arranged to seal both the product passage (21) and the vent passage (25).

7. The dispenser of Claim 6 wherein the first part (24) of the eductor is rotatable and extends from the body member (12).

8. The dispenser of Claim 1 further including a trigger member (40) connected to the body member (12) and eductor (11) to cause slideable movement of the eductor.

12. The dispenser of Claim 11 wherein the inlet includes a hose engaging member (18) extending over a portion of a finger engaging portion.

13. A method of venting a gas from a container employing the dispenser of Claim 1. 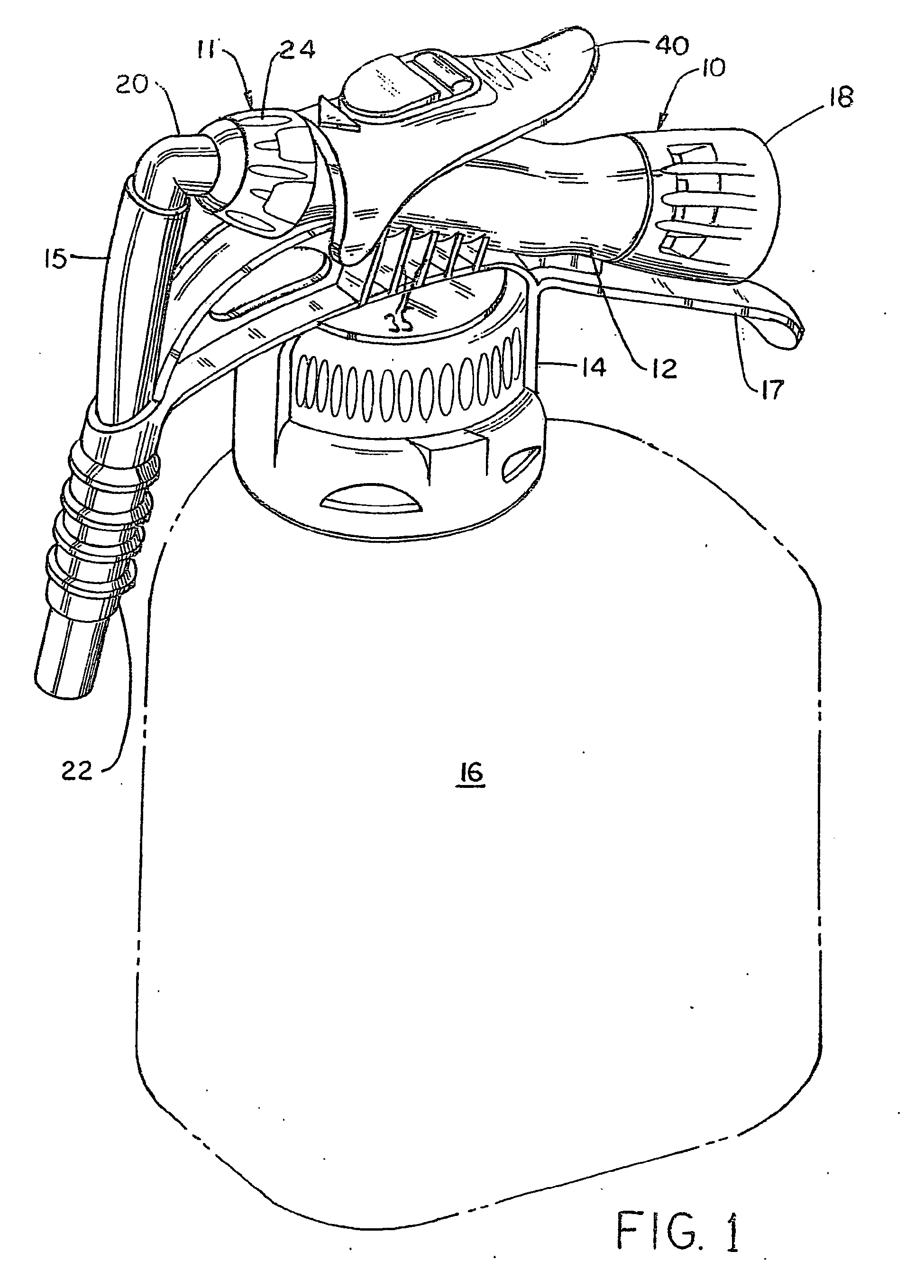 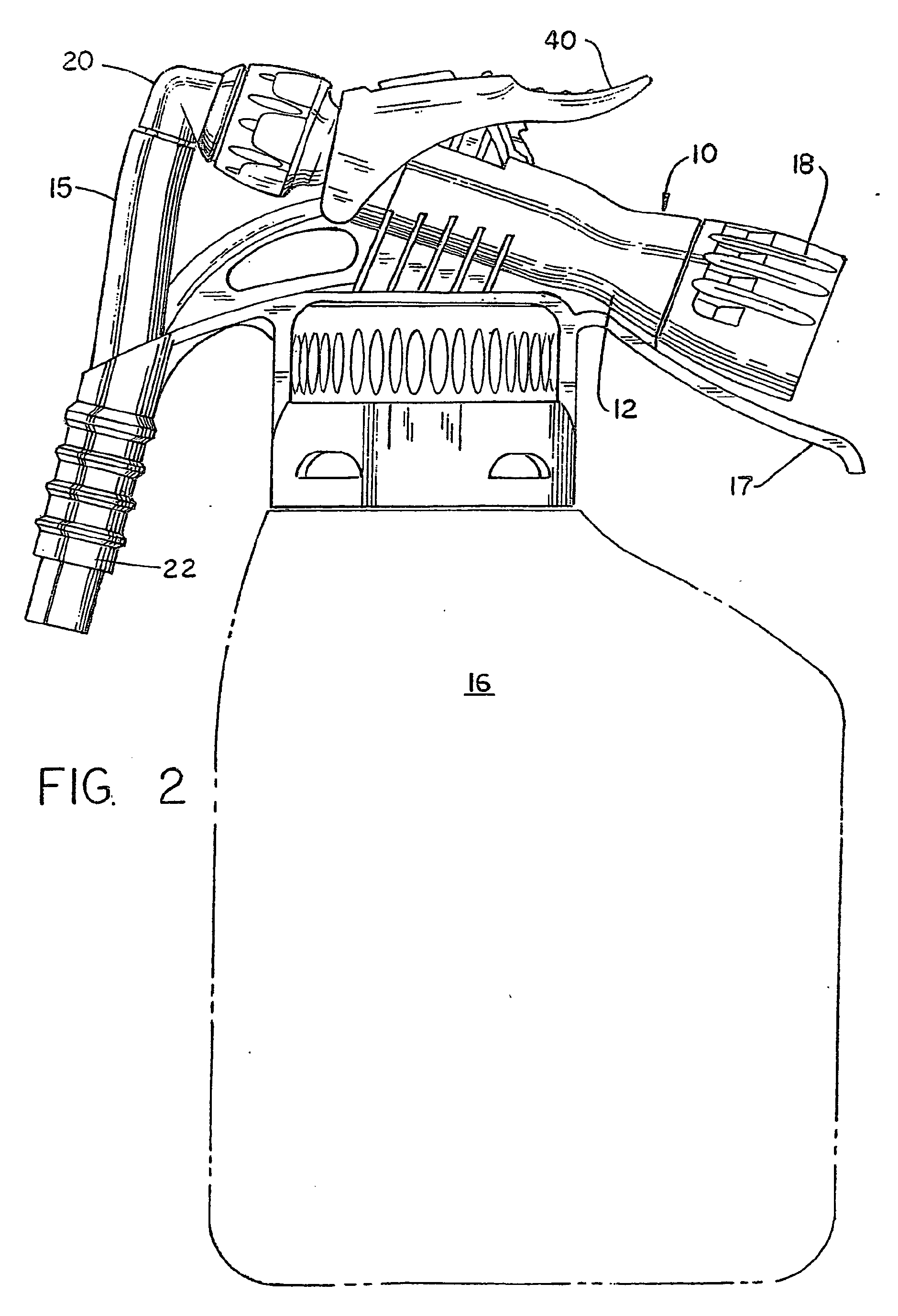 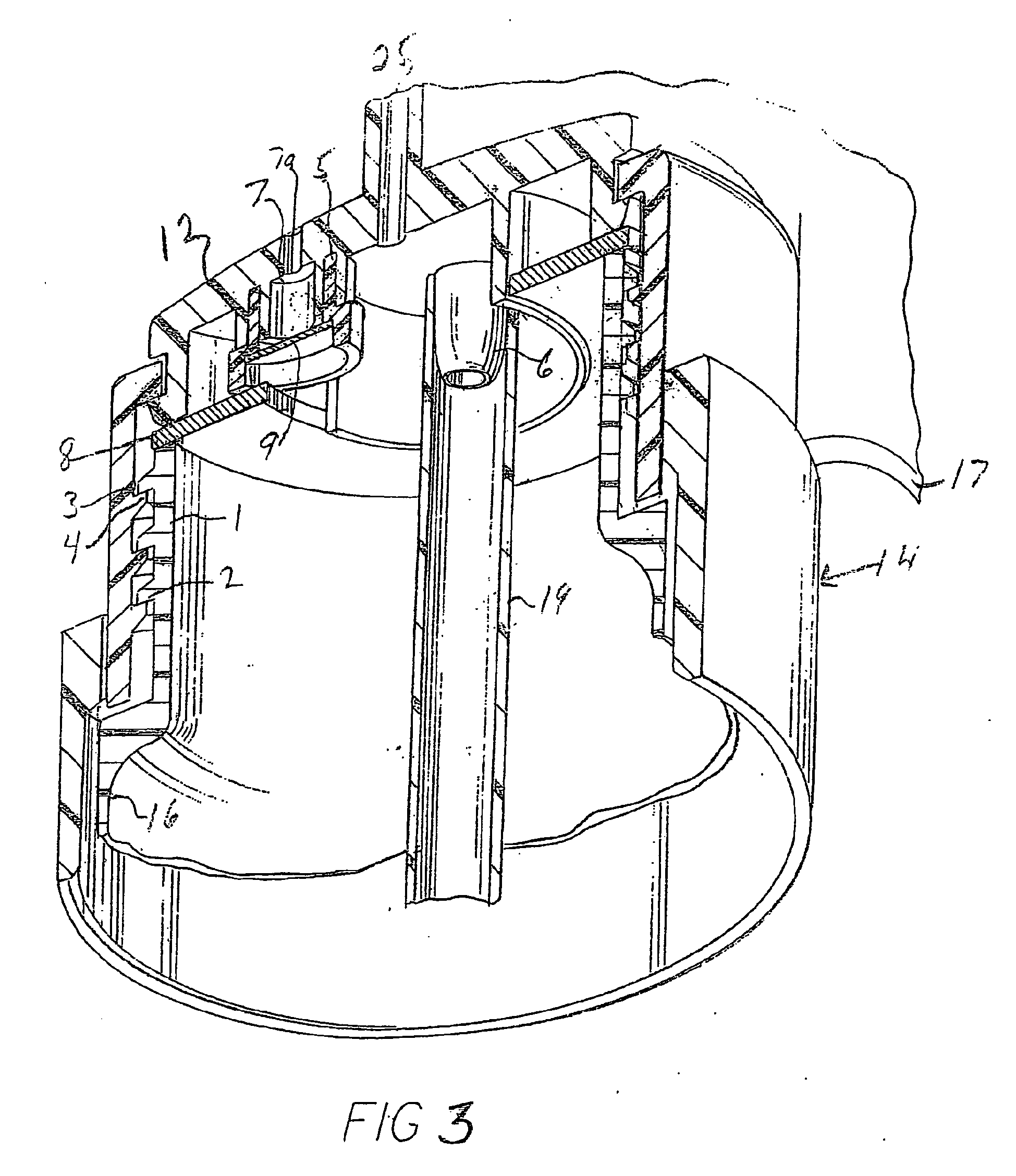 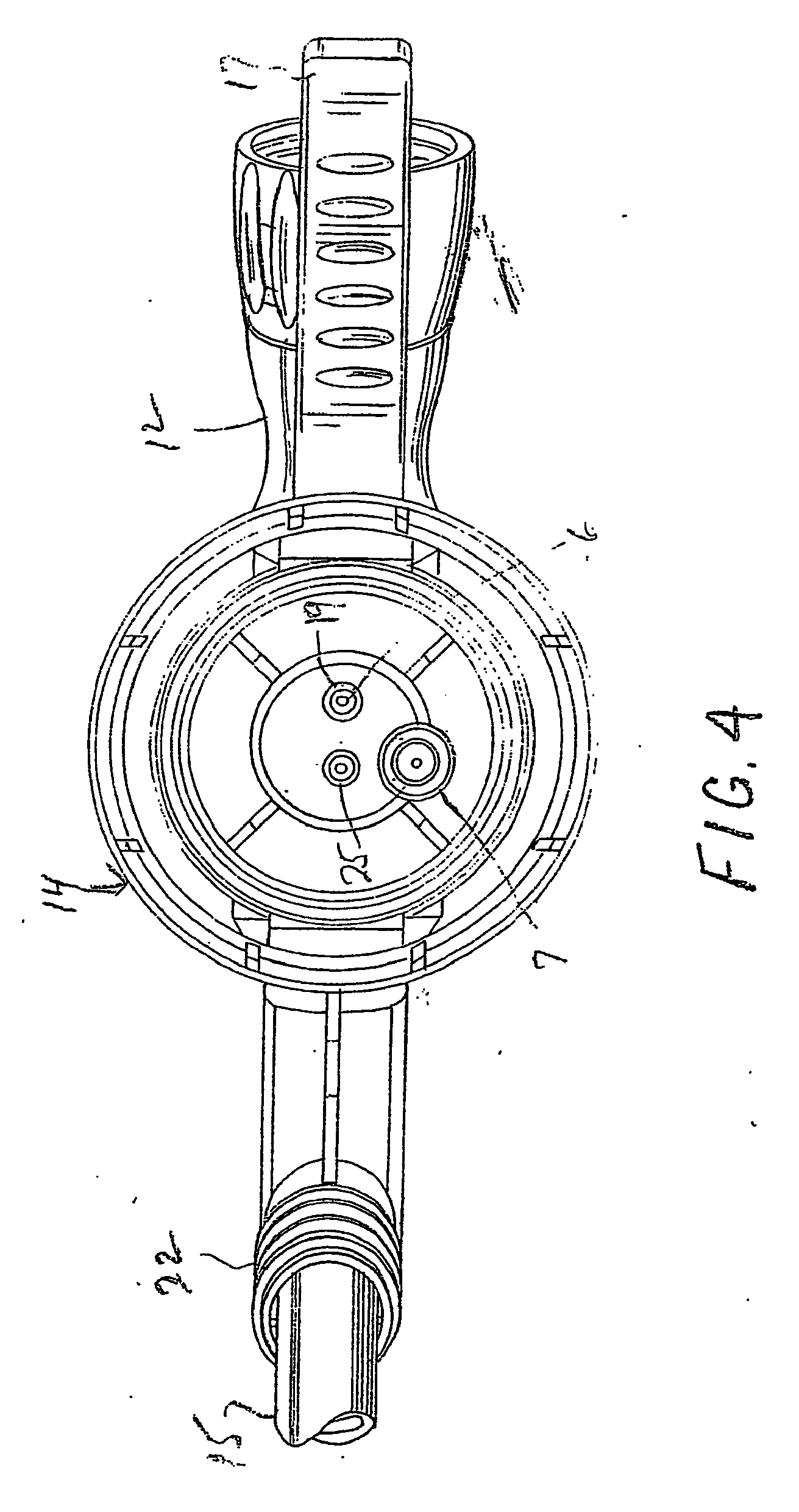 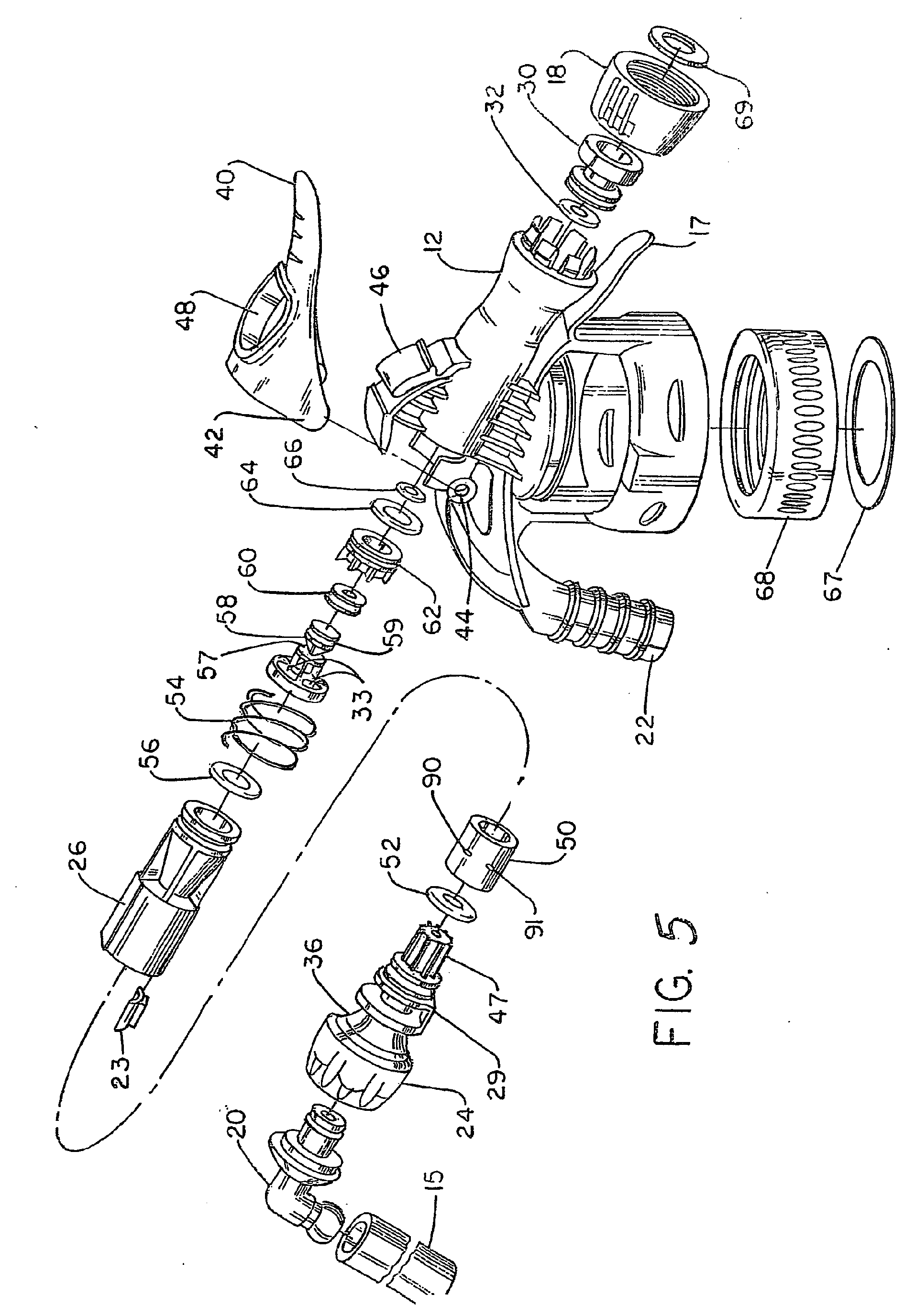 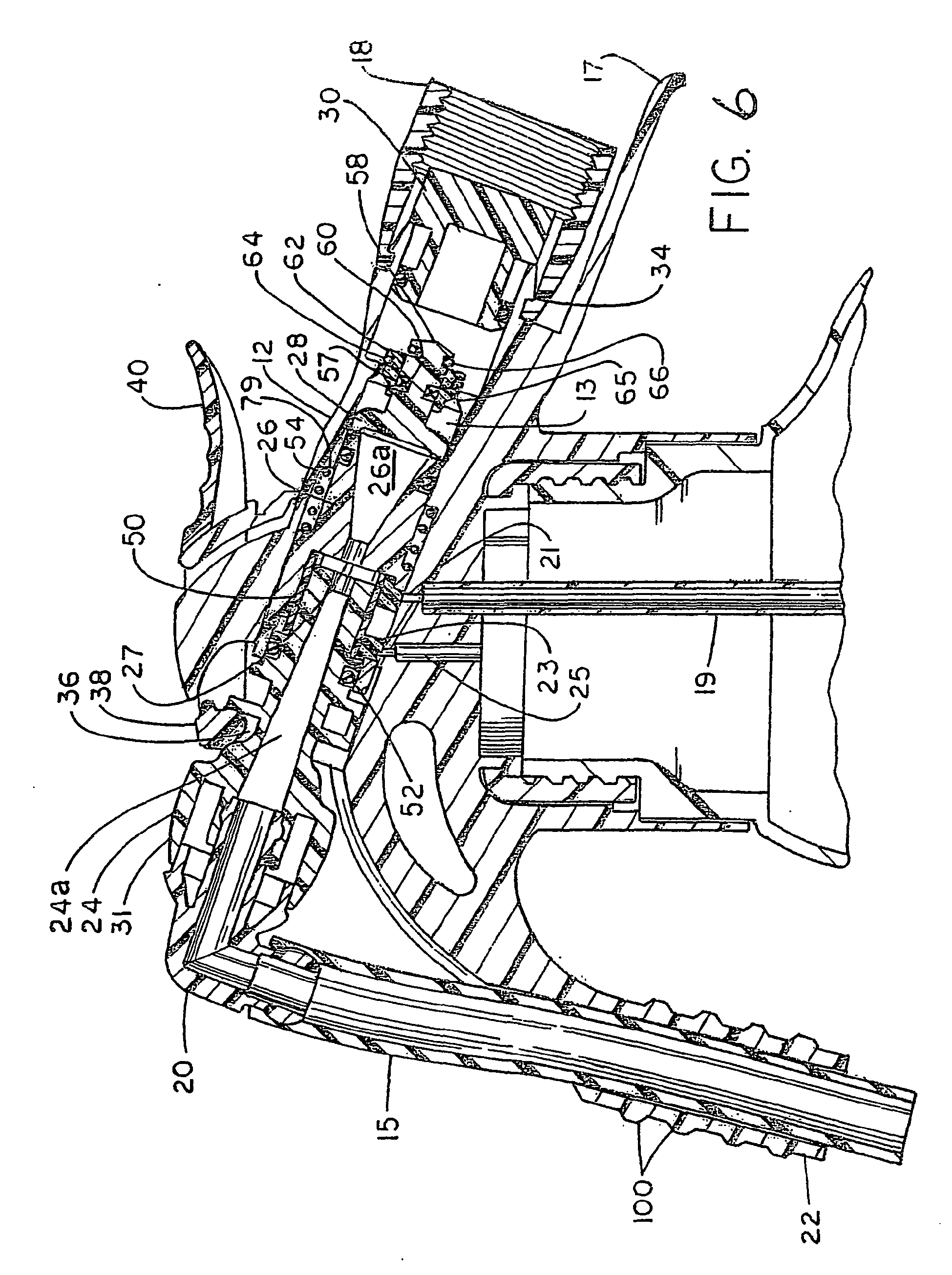 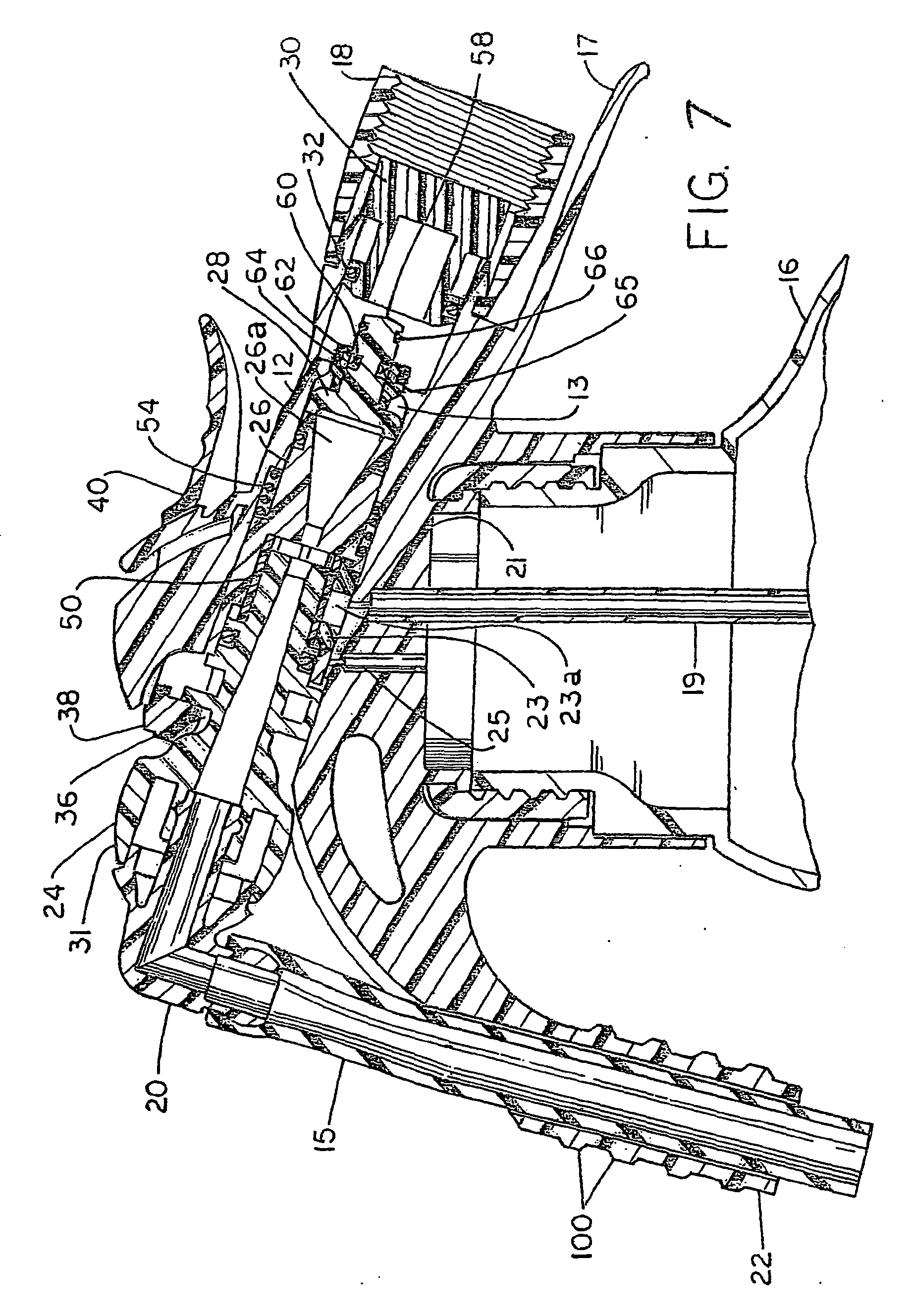 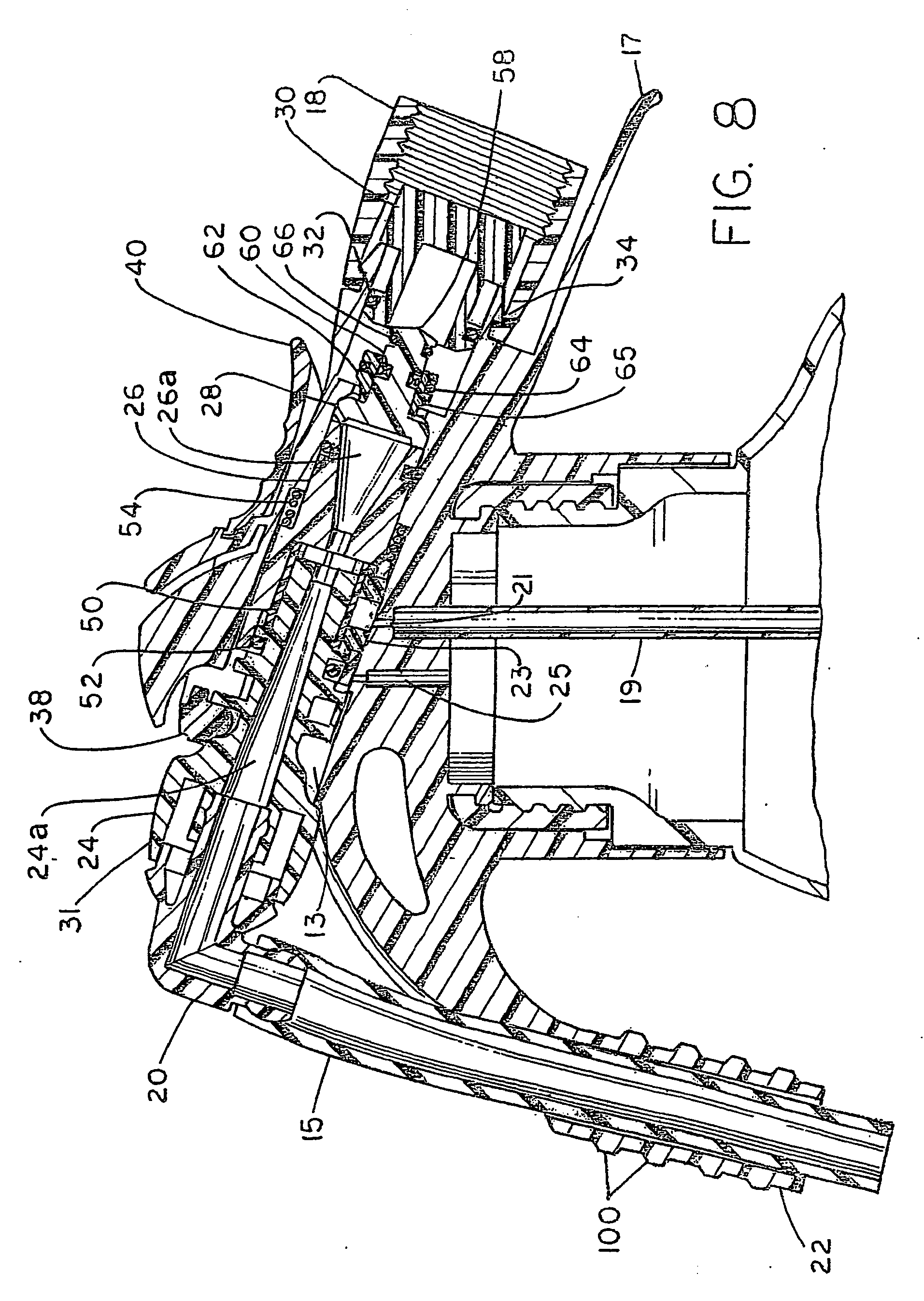 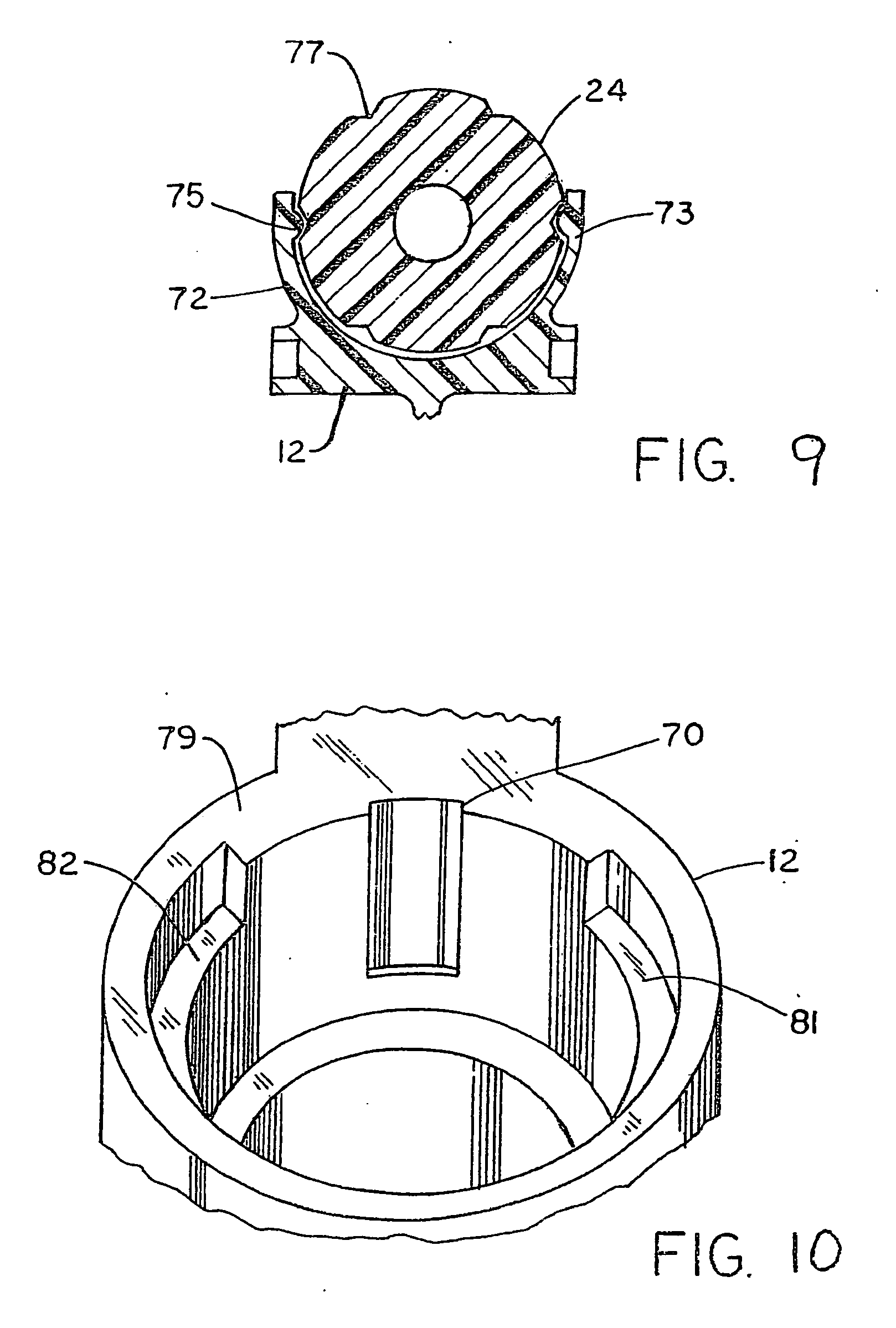 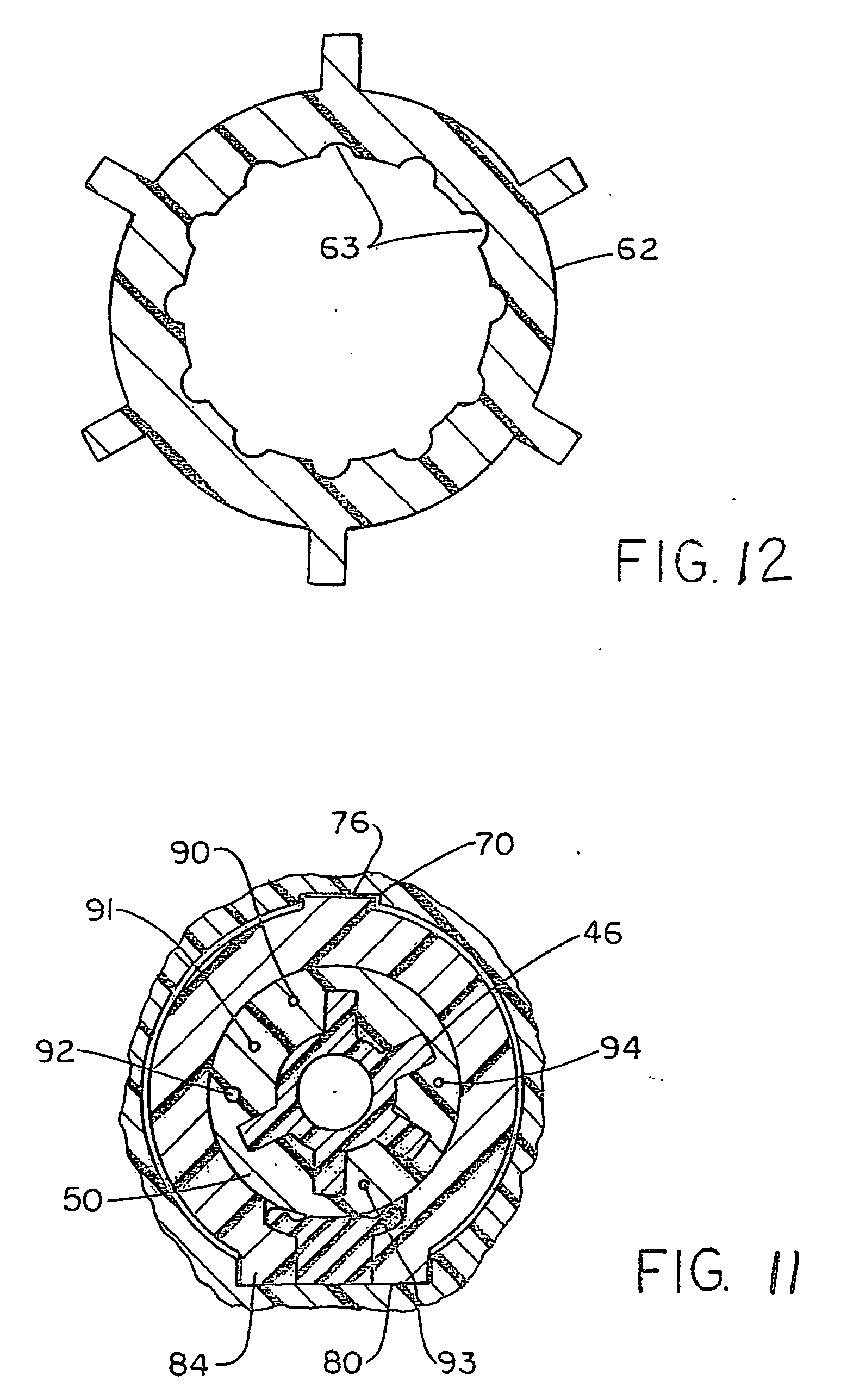