[0001] This invention relates generally to wind turbines, and more particularly to the control of the temperature inside a hub of a rotor of a wind energy turbine.
[0002] Large modern type energy turbines include rotors having hubs which include several components such as a rotor blade actuator (pitch) drive which produce energy losses in the form of heat that increases the temperature inside the hub. In some types of wind energy turbines, the temperature inside the hub increases due to heat flow from components of the nacelle located close to the hub of the rotor. Due to the shaft of the rotor extending from the hub into the nacelle there is a relatively large opening between the hub and the nacelle where warm air from inside the nacelle can easily propagate into the hub. At higher ambient temperatures the above-identified two effects can lead to temperature levels inside the hub which are higher than the upper temperature limits tolerable for the components arranged in the hub.
[0003] US 2005/0242233 discloses an anti-icing system for wind turbines.
[0004] JP 2005 069 082 describes a temperature controller of a windmill.
[0005] US 6,676,122 relates to a wind energy facility with a closed cooling circuit.
[0006] In one aspect according to the present invention, a rotor for a wind energy turbine in accordance with appended claim 1 is provided.
[0007] In another aspect of the present invention there is provided a method as defined in appended claim 2.
[0008] Various aspects and embodiments of the present invention will now be described in connection with the accompanying drawings, in which:

Fig. 1 shows a front view of a wind energy turbine schematically indicating the air flow inside the blades for cooling purposes of the hub.

Fig. 2 is a schematic diagram of a first alternative for an air flow for temperature controlling purposes inside the hub.

Fig. 3 shows a second alternative for an air flow for temperature controlling purposes inside the hub.

Fig. 1 depicts a wind energy turbine 10 comprising a tower 12 and a nacelle rotatably supported by tower 12 as well as a rotor 16 rotatably supported by nacelle 14. Rotor 16 includes a central hub 18 and three rotor blades 20 mounted to hub 18. Each rotor blade 20 includes an outer tip 22 and an inner root 24 attached to hub 18. Dotted lines 26 schematically indicate an air flow out of hub 18 and through the inside of rotor blades 20 for controlling the temperature inside hub 18. The embodiment shown in Fig. 1 comprises a three blade rotor 16. However, the number of blades 20 of rotor 16 is not critical. Also it is not necessary that, for temperature controlling purposes inside hub 18, an air flow 26 has to be established through all rotor blades 20. Accordingly, various embodiments of the present invention also function in a one blade rotor or in a multiple blade rotor wherein an air flow is generated from hub 18 towards at least one of the rotor blades and through this at least one rotor blade 20.

Fig. 2 shows a first alternative for an air flow means 28 arranged within hub 18 and creating a circulating air flow 26 from hub 18 through blade 20 and back to hub 18. This active air flow means 18 includes a motorized fan 30 arranged inside hub 18. Fan 30 can also be arranged within blade 20. Blade 20 typically includes an outer shell or wall 32 defining an inner space 34 which is divided into two half spaces 36, 38 by means of an inner supporting wall 40 for stiffening and stabilizing outer shell 32 of blade 20. Inner supporting wall 40 extends from root 24 of rotor blade 20 towards close to its tip 22 at which the two half spaces 36, 38 are in fluid communication with each other. At root 24 of blade 20 there are two separate openings, namely one inlet opening 42 and one outlet opening 44. Air to be temperature-controlled from inside hub 18 is blown by means of fan 30 out of hub 18 and into half space 36 through which the air flows in a longitudinal direction of rotor blade 20 through the same. At tip 22 the air enters the second half space 38 through which the air flows back into the inside 46 of hub 18. This air flow system is useful for cooling the air within hub 18 in that the air when flowing through rotor blade 20 is cooled at the inner surface of rotor blade 20 so as to re-enter hub 18 as cooled air. However, this system can also be used to heat the air inside the hub, such as during winter time or cold weather conditions. By means of sensors (not shown) the temperature difference between hub and blade inner air temperatures can be determined while a controller (not shown) controls the heat transfer by activating or deactivating fan 30 so that cooling is provided if the temperature difference between blade and hub inner air temperatures would allow cooling or heating effect as desired.

[0013] Passive air flow means 47 according to Fig. 3 includes at least one opening 48 at tip 22 of at least one of rotor blades 20. In this means, tip 22 of rotor blade 20 includes three openings 48. Moreover, in passive air flow means 47 air can be sucked into interior 46 of hub 18 from outside of rotor blade 20, which is indicated in Fig. 3 by arrows 50. Upon rotation of the rotor provided with passive air flow means 47 according to Fig. 3, due to the Venturi effect an under-pressure or vacuum is generated in inner space 34 of rotor blade 24. This under-pressure or vacuum causes an air flow 26 directed from inner space 46 of hub 18 towards openings 48 at tip 22 of blade 20. Due to the vacuum and under-pressure within hub 18, ambient air is sucked from outside of the rotor into hub 18 for cooling purposes.
[0014] By means of various embodiments of the present invention components located inside the hub like rotor blade actuator drives (motors), converters and batteries can be effectively cooled or kept at a more constant temperature close to their optimal design temperatures. Due to this cooling or temperature control effect, it is easily possible to design motors and converters for the pitch application because the temperature ratings do not need to be extreme. Also installation of wind turbines at higher altitudes would be more feasible. Finally, the lifetime of the batteries would increase as the operation or temperature would be held more constantly and closer to the optimal design temperature. Finally, temperature control within the hub is also useful with regard to wind energy turbine types having arranged heat generating elements within the nacelle and rather close to the rotor. On high-temperature sites or high-altitude sites also for current gear box design wind turbines, various embodiments of the present invention would be suitable in order to cool the hub located next to the gear box.
[0015] While the invention has been described in terms of various specific embodiments, those skilled in the art will recognize that the invention can be practiced with modification within the scope of the claims.
PARTS LIST

wherein the inner spaces of said hub and said at least one rotor blade are in fluid communication;

air flow (26) means causing air to flow out of the hub into the at least one rotor blade;

said rotor (16) further comprising sensors for determining a temperature difference between hub (18) and blade (20) inner air temperatures; and characterized in that it further

comprises a controller configured to control heat transfer by activating or deactivating the fan (30) so as to provide a cooling or heating effect in the hub (18) in order to maintain a temperature in the hub (18) substantially constant. 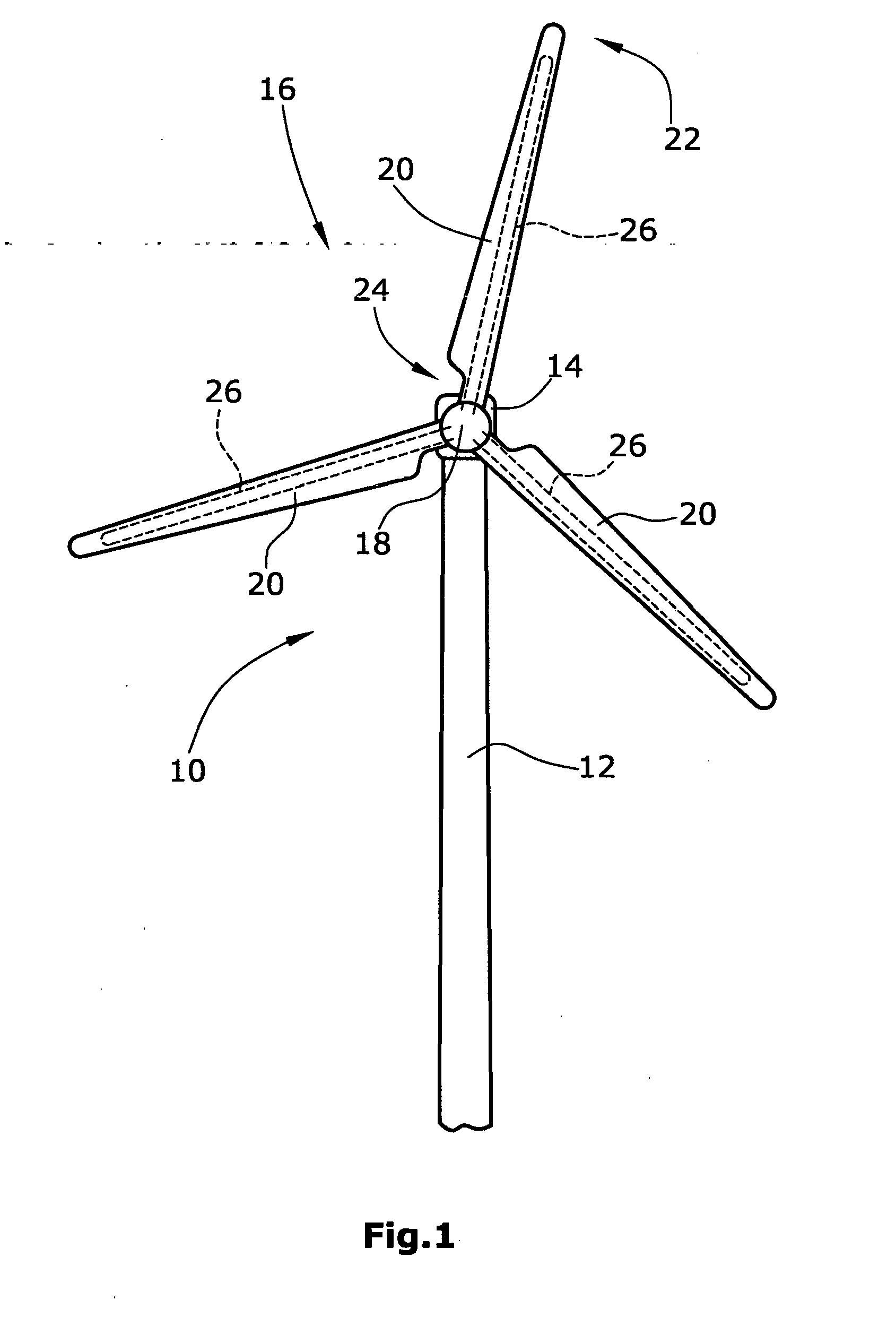 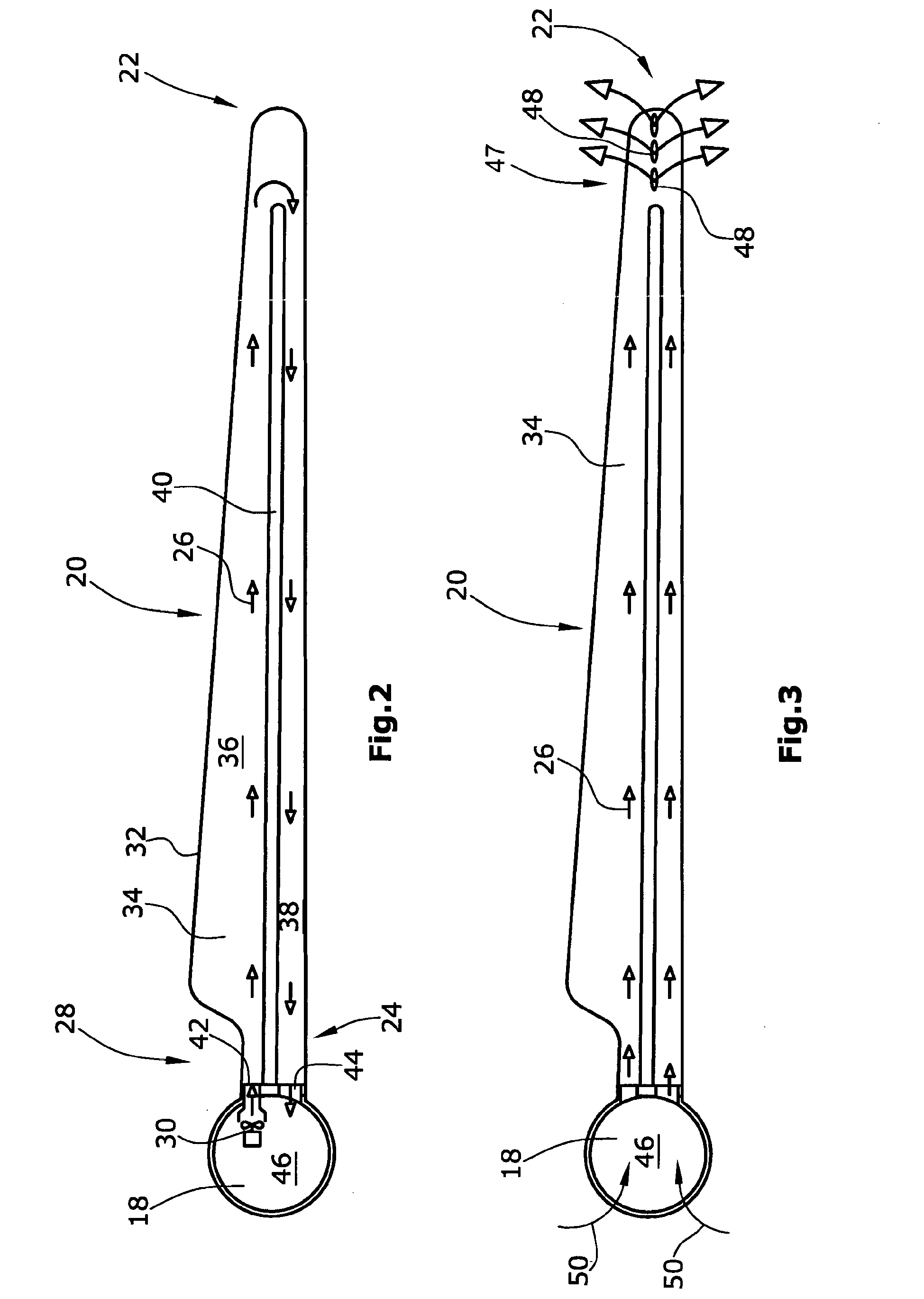