[0001] The present invention relates generally to gas turbine engine combustors and, more particularly, to a low cost combustor configuration having improved performance.
[0002] Gas turbine combustors are the subject of continual improvement, to provide better cooling, better mixing, better fuel efficiency, better performance, etc. at a lower cost. Also, a new generation of very small gas turbine engines is emerging (i.e. a fan diameter of 20 inches (50.8 cm) or less, with about 2500 lbs. (1135 kg) thrust or less), however larger designs cannot simply be scaled-down, since many physical parameters do not scale linearly, or at all, with size (droplet size, drag coefficients, manufacturing tolerances, etc.). There is, therefore, a continuing need for improvements in gas turbine combustor design.
[0003] A prior art annular combustor is shown in US-5331805.
[0004] In accordance with the present invention there is provided a gas turbine engine combustor as claimed in claim 1.
[0005] Also disclosed is a method of combusting fuel in a gas turbine combustor, the method comprising the steps of injecting a mixture of fuel and air into the combustor along an axis, igniting the mixture to create at least one combustion zone in which the mixture is combusted, and directing air into the combustor around said axis in a spiral pattern.
[0006] Further details of these and other aspects of the present invention will be apparent from the detailed description and Figures included below.
[0007] Reference is now made to the accompanying Figures depicting aspects of the present invention, in which:

Figure 1 shows a schematic cross-section of a turbofan engine having an annular combustor;

Figure 2 shows an enlarged view of the combustor of Figure 1;

Figure 3 shows an enlarged view of an alternate embodiment of a combustor of the present invention, schematically depicting a subset of the holes which may be provided therein;

Figure 4 shows an inside end view of the dome of the combustor of Figure 2;

Figure 5 is a view similar to Figure 2, schematically depicting the device in use;

Figure 6 is a view similar to Figure 3, schematically depicting an aspect of the device in use; and

Figure 7 is similar to Figure 6, but showing one effect of the one aspect of the present invention.

1. A gas turbine engine combustor (16) comprising a liner (26) enclosing a combustion chamber (32), the liner (26) including a dome portion (34) at an upstream end thereof, the dome portion (34) having defined therein a plurality of openings (56) each adapted to receive a fuel nozzle (50) and a plurality of holes (46') defined around each opening (56), each opening (56) having an axis generally aligned with a fuel injection axis of a fuel nozzle (50) received by the opening (56), the holes (46') being adapted to direct air into the combustion chamber (32) in a spiral around the axis of an associated one of said openings (56),
characterised in that:

the holes (46') are defined in a plurality of rows around at least one opening (56). 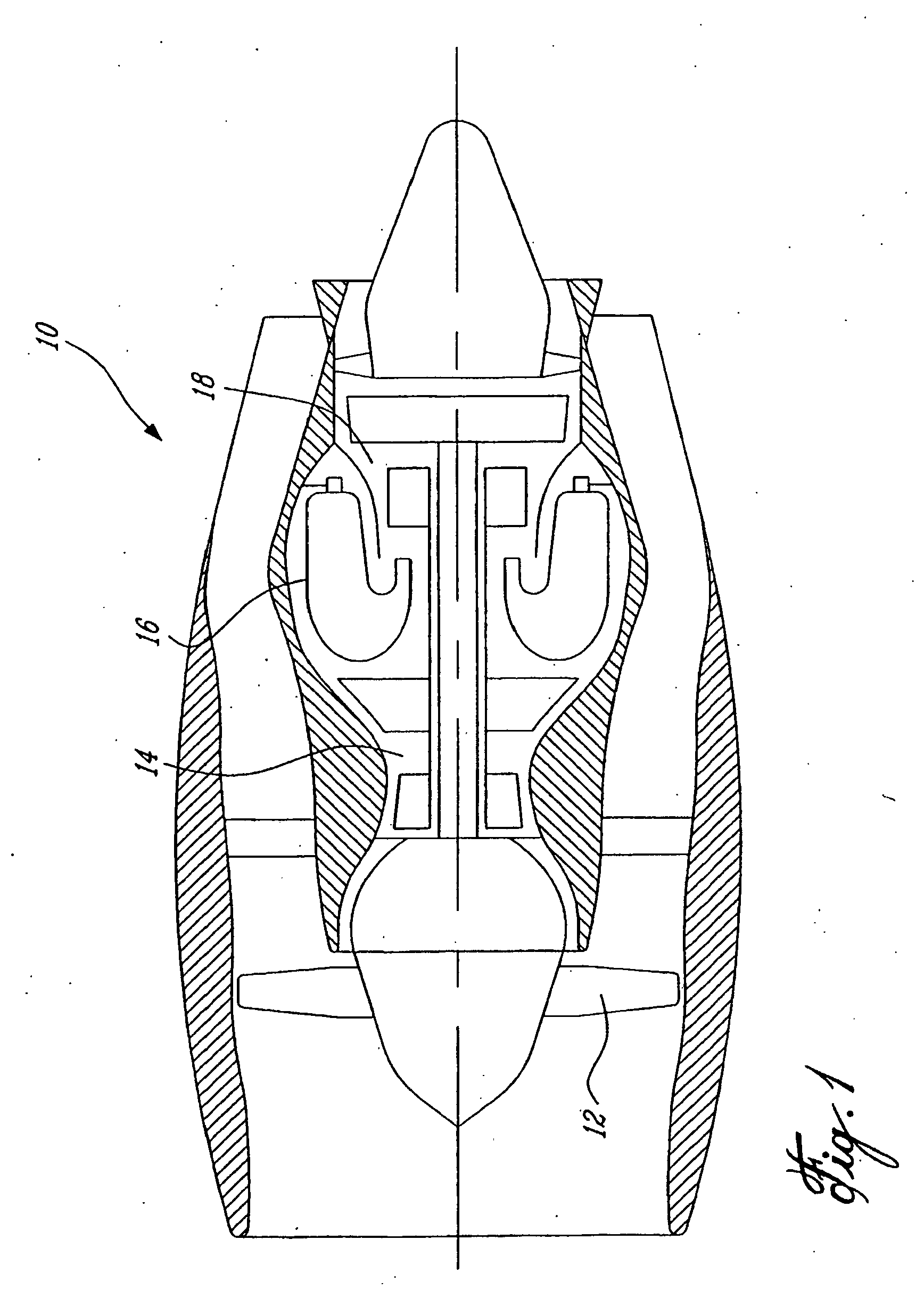 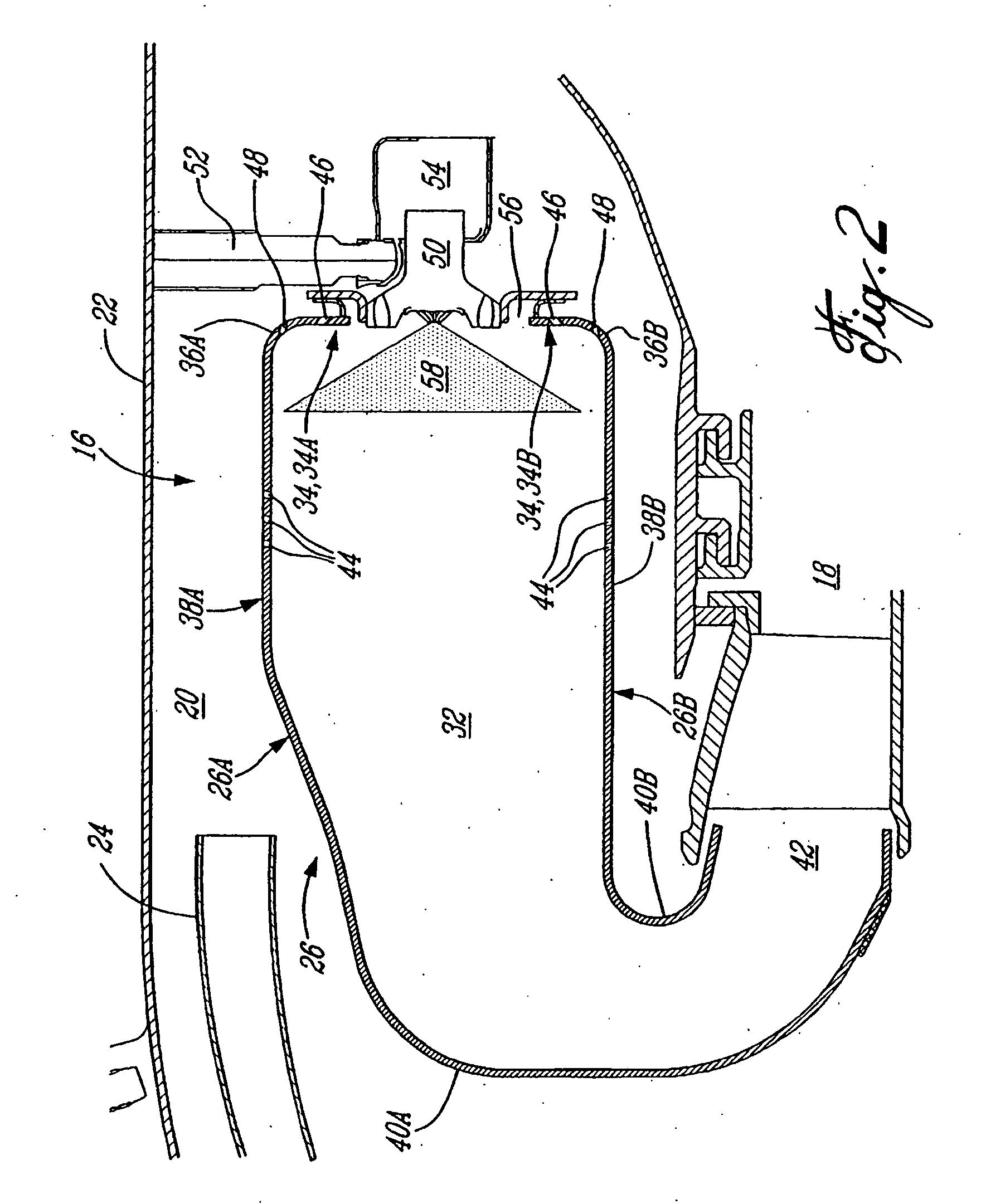 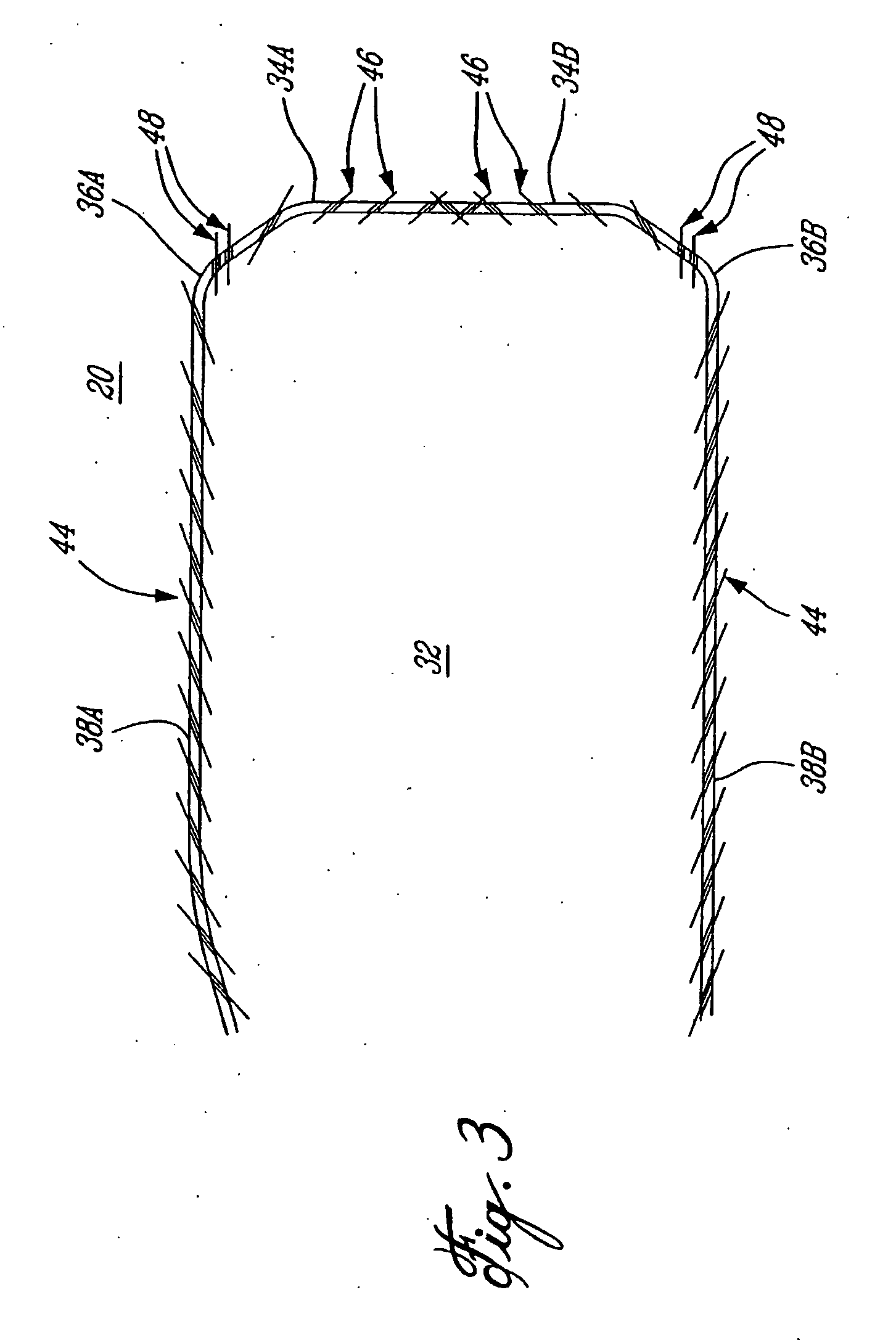 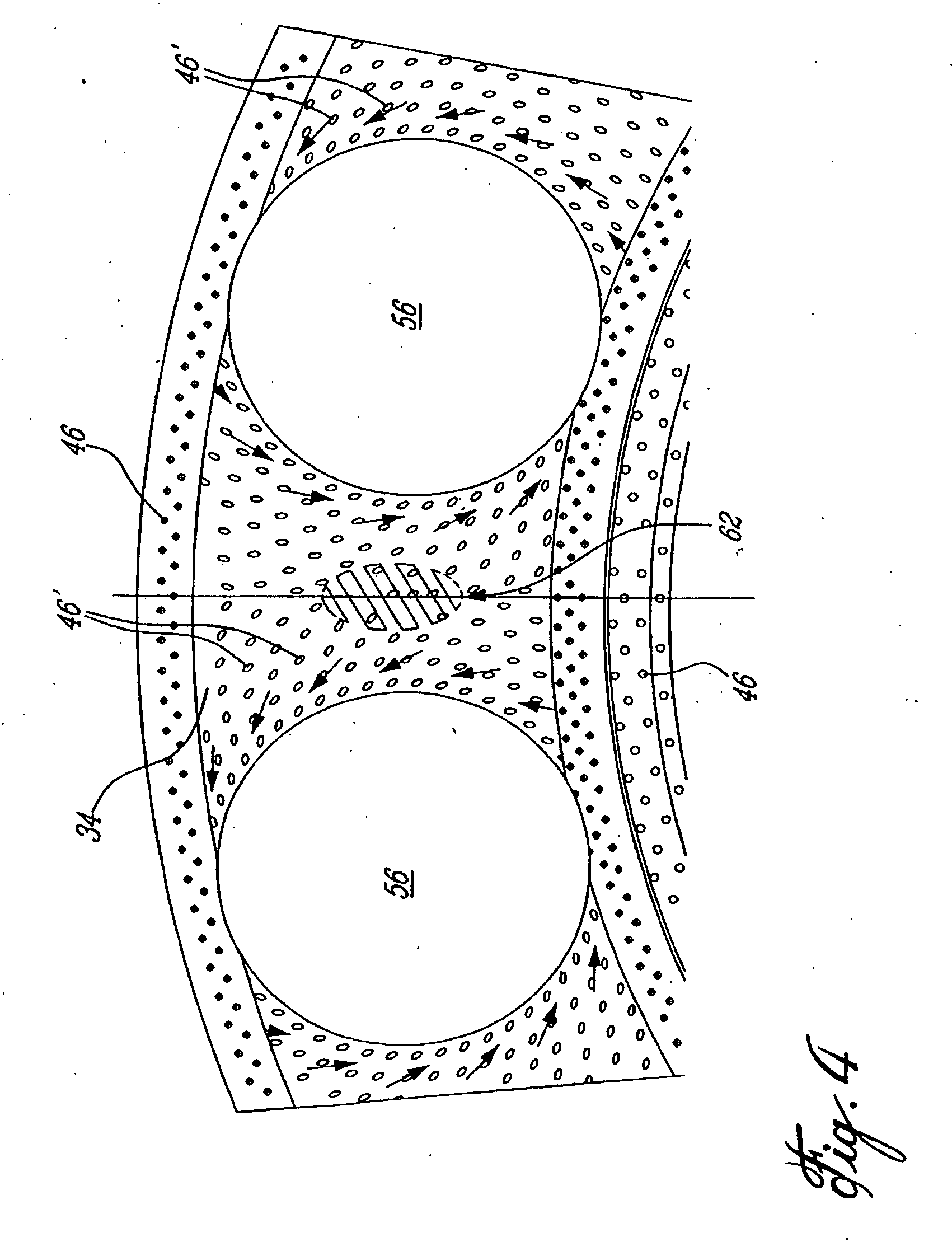 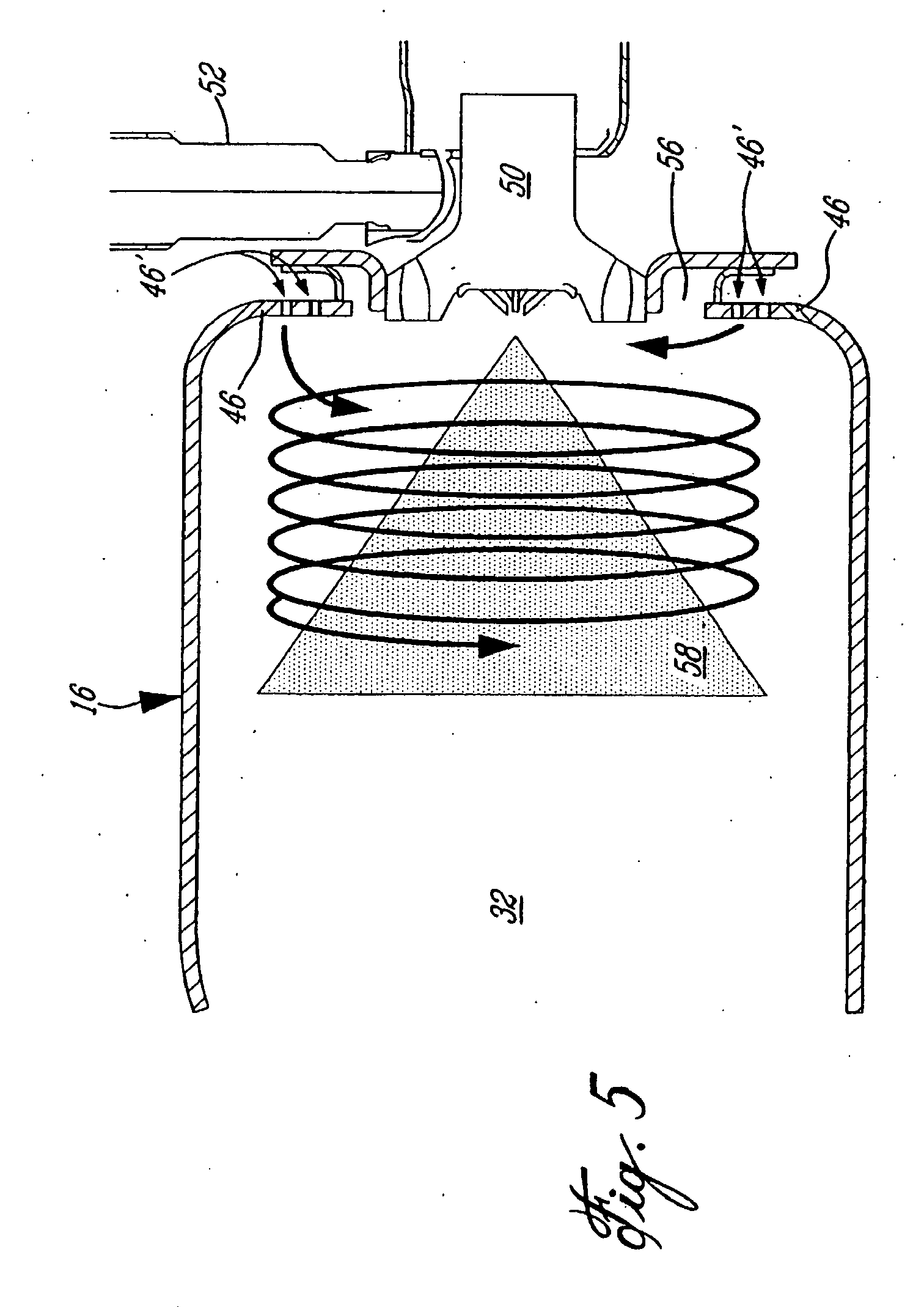 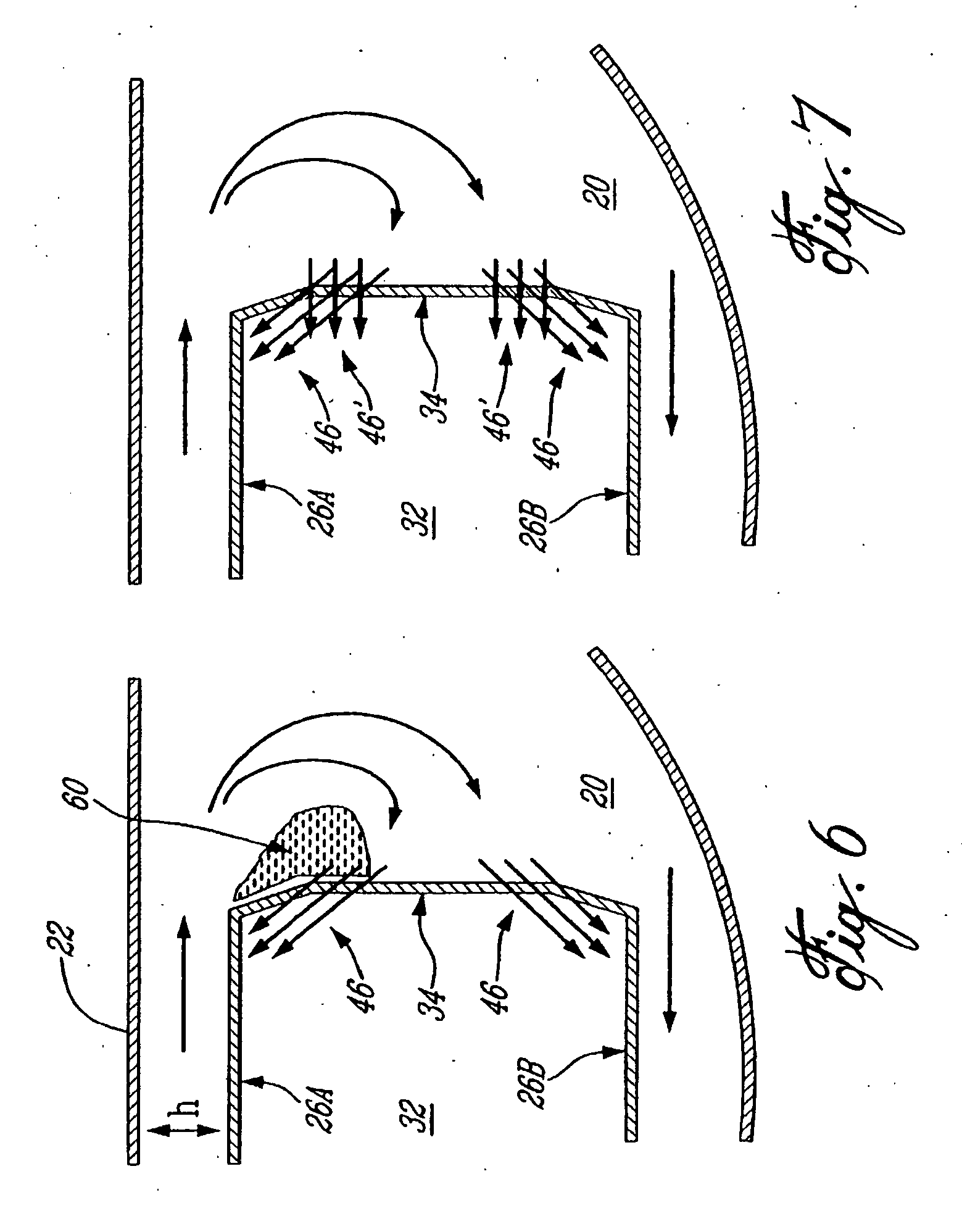