[0001] The present invention relates to a method of producing an electronic device, particularly but not exclusively, to a method of creating and filling via holes in order to provide a continuous electrical connection between layers within an electronic device.
[0002] Many existing processes to produce connecting via holes within the prior art involve the use of techniques such as vacuum processing or wet plating methods to produce conductive layers that connect into via holes. Laser ablation combined with electroless plating of copper is a common technique for fabrication of via hole interconnection in high density multilayer printed circuit boards.
[0003] In patent number US20020158307, the conductive layers of a substrate are deposited using vacuum processing methods. A metallic thin film is applied to a substrate with a metal thin film formation device. The metallic thin film can be formed by such well-known vacuum processes as vapour deposition, sputtering, or ion plating. Via holes are then formed through the layers of the substrate and filled with conductive material. The conductive material electrically connects the metallic thin film layers. The metal thin films are not exposed at the periphery, so that corrosion of the metal thin films is not likely to occur.
[0004] In patent number US20020090814, a substrate composed of a layer of insulator material, such as SiO2 is deposited on top of a semiconductor layer. Via holes are formed within the insulator layers, having a diameter of 0.15 µm and a depth of 0.9 µm (aspect ratio: 6). Thereafter, copper is filled into the via holes by performing a process of wet plating (electroplating or electroless plating) to form copper interconnects.
[0005] However, the prior art has many potential failure points. Vacuum processing techniques require a chamber in which the component is loaded to be evacuated of air. In order to achieve this, a lengthy pump down process is required. A relatively thick metal film is required to ensure electrical conduction through the via hole, particularly for high aspect ratio vias. For high aspect ratio vias it may be difficult to ensure continuous coverage of the side walls due to shadowing effects.
[0006] The wet plating techniques require chemical compatibility to the various resists as well as the etch and rinse solutions in addition to the exposed polymer layers on the substrate stack. This is particularly a concern when the substrate already contains sensitive active electronic devices, such as transistors. In particular, for transistors containing organic materials such as molecular or polymer semiconductor degradation of the electronic properties of the active elements during a wet plating step is difficult to avoid. Wet plating solutions also cause concerns in terms of their hazardous nature and their environmental disposal.
[0007] A method of creating via holes using solvents to locally dissolve and redeposit the material of the layers of a device into a ring around the edges of the created via hole are also known in the prior art (US20030060038). By redepositing the material of the layers around the edges of the created via hole, the underlying conductive layer surface is exposed. If multiple solvent drops are required for dissolving a thick dielectric layer this is a time-consuming process as it is necessary for each deposited solvent drop to evaporate before the next drop may be deposited. This process is appropriate for via holes that are required through thin dielectric layers of a device. The solvent etched vias were filled by inkjet printing of multiple droplets of a conducting polymer into the via-hole, the formation of an electrical interconnection in this way is facilitated by the relatively smooth side walls of inkjet etched vias and the relatively small depth of the inkjet etched vias (<1µm). This process is time-consuming since several droplets need to be printed into each hole.
[0008] In the prior art, connection to buried conductive layers is usually made to the surface of the buried conductive layer. The process disclosed in the present invention provides a high yielding interconnection in situations where it cannot be ensured that the conductive layer is not removed from the substrate by the method with which the via-hole through the multilayer structure is opened.
[0009] Furthermore, in the prior art the filling of via holes through thick dielectric layers with a thickness of 1-20 µm requires long process times and large amount of material to be deposited. In the present invention a filling method is disclosed which establishes a high yielding, reliable interconnection in a single solution coating or single pass printing step.
[0010] A further problem of the methods disclosed in the prior art is related to the thickness of the buried layer to which an electrical interconnection is to be made. In typical printed circuit board applications the copper layers have a thickness of more than 1 µm. However, for circuits which contain active electronic devices, such as transistors where via hole interconnections to buried electrodes with a thickness on the order of 100 nm need to be formed with high yield, the methods disclosed in the prior art are not applicable, since they do not allow formation of high yield interconnections to such thin buried electrodes.
[0011] It is one aim of the present invention to provide an alternative technique for creating connections between conducting elements at different levels of an electronic device.
[0012] US2004/147113 describes a technique of manufacturing a semiconductor device using ink-jet printing. WO2004/096451 describes a technique of forming organic transistors using a drop discharge method. US2002151171 describes a technique involving applying a coating of a liquid containing metal fine particles to the inside of a penetration hole in a semiconductor chip. WO2004/070466 describes a technique of forming pixel capacitors in a transistor-controlled display device. US6764885 describes a technique of making a transistor device using embossing.
[0013] There is hereby provided a method according to claim 1.
[0014] To help understanding of the invention, specific embodiments thereof will now be described by way of example and with reference to the accompanying drawings, in which:

Figure 2 illustrates a process sequence for generation of via holes in the multilayer structure by laser ablation, and filling them by solution deposition of a conductive material to connect to the surface of a buried conducting layer according to an embodiment of the present invention.

Figure 3 illustrates another process sequence for generation of via holes in the multilayer structure by laser ablation, and filling them by solution deposition of a conductive material to connect to the side wall of a buried conducting layer according to an embodiment of the present invention.

Figure 4 shows a via-hole with a finite taper angle.

Figure 5 shows yet another process sequence for generation of via holes in the multilayer structure by laser ablation, and filling them by solution deposition of a conductive material according to an embodiment of the present invention.

Figure 6 shows another embodiment of the invention for connecting more than two conductive layers with a via hole interconnection.

Figure 7 shows another embodiment of the inventions for connecting two buried conductive layers with a via-hole interconnections. 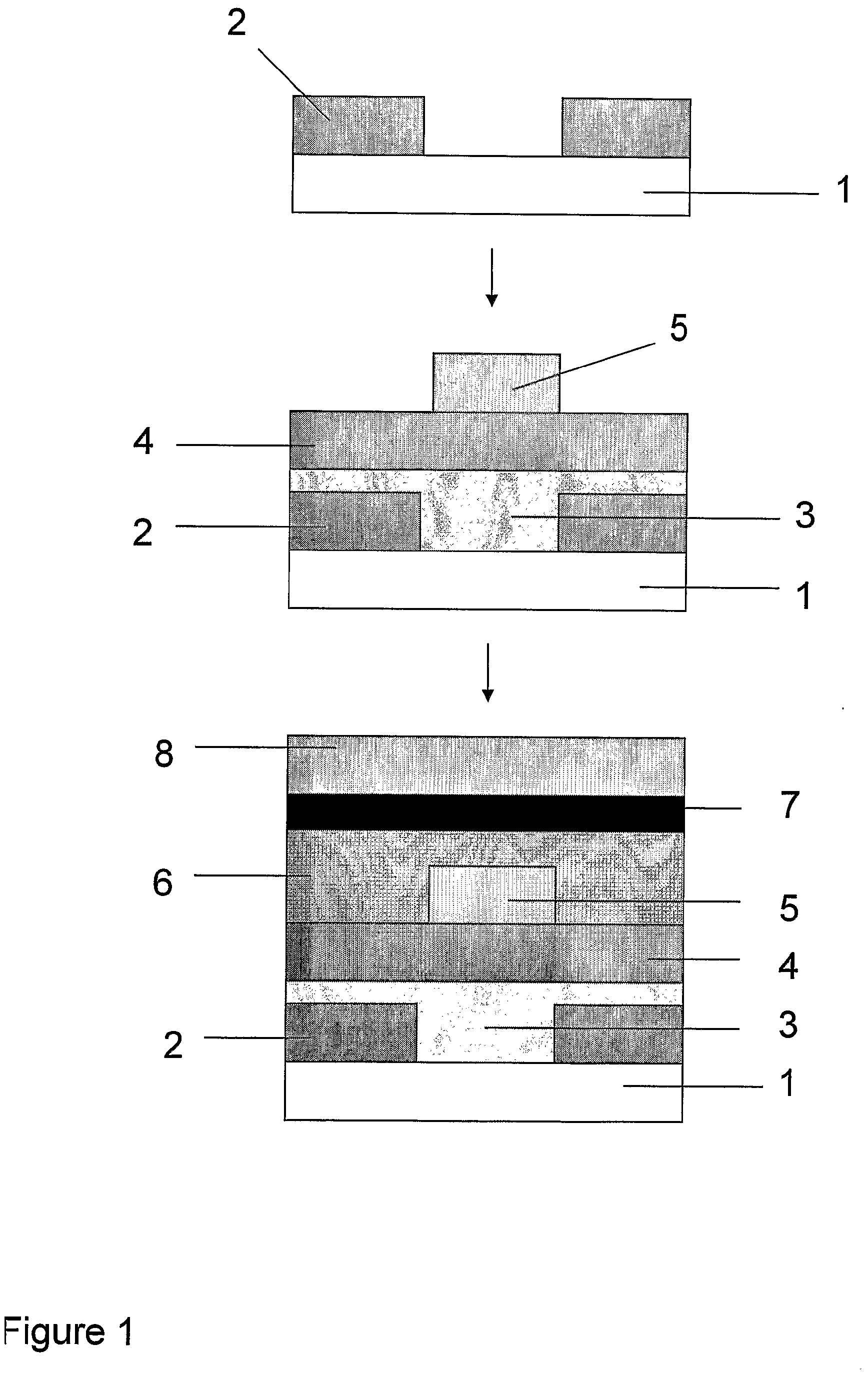 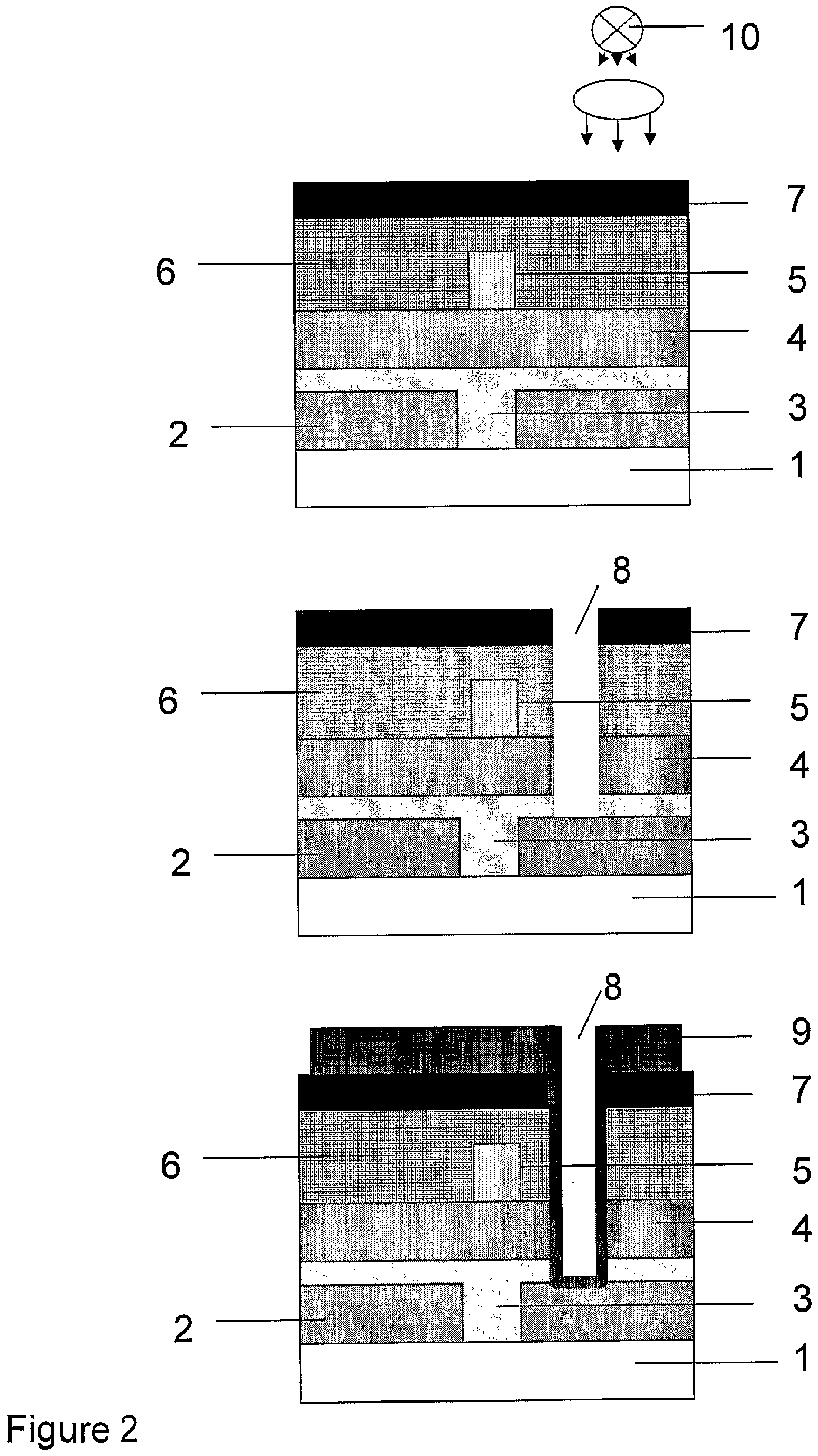 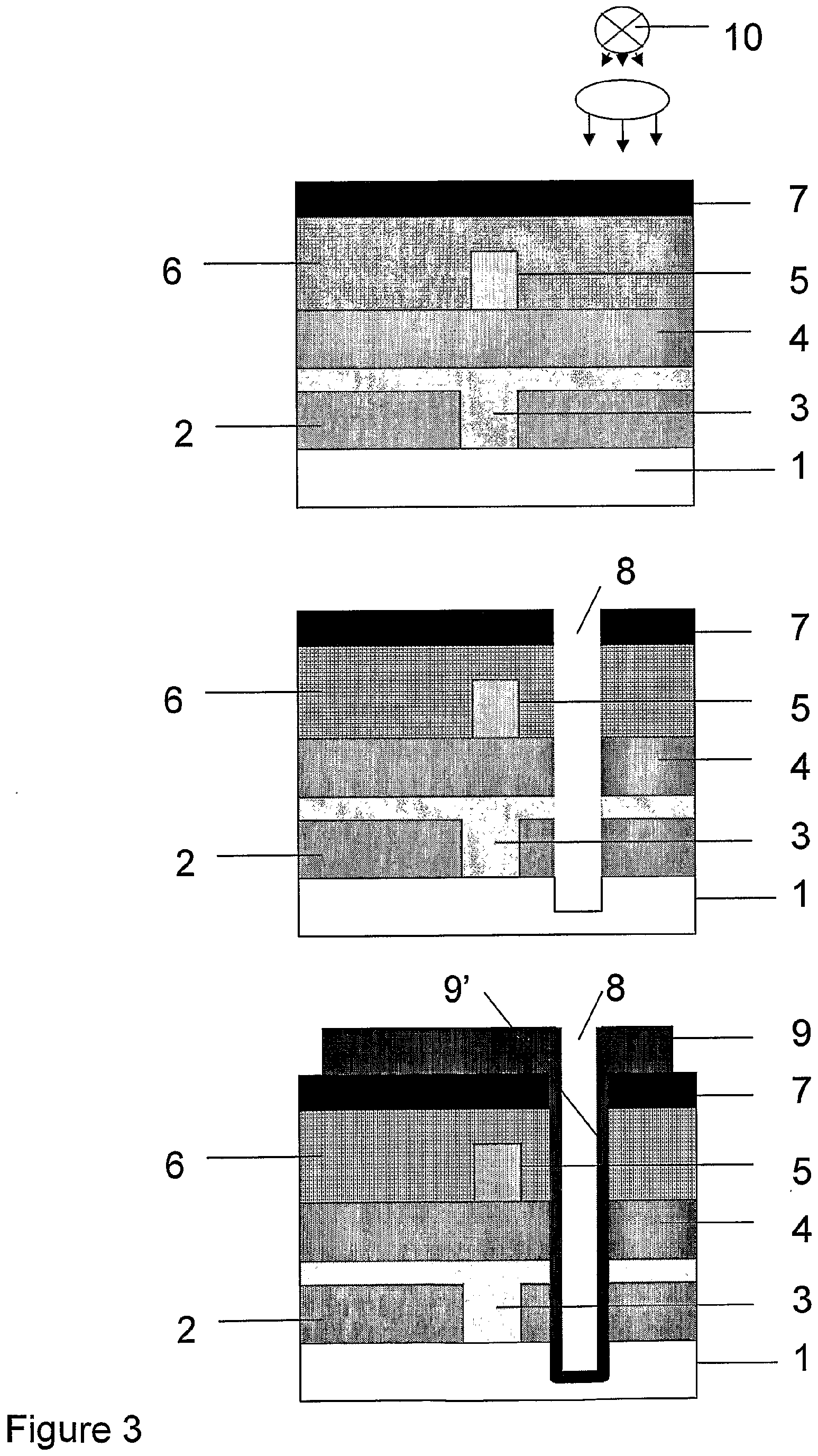 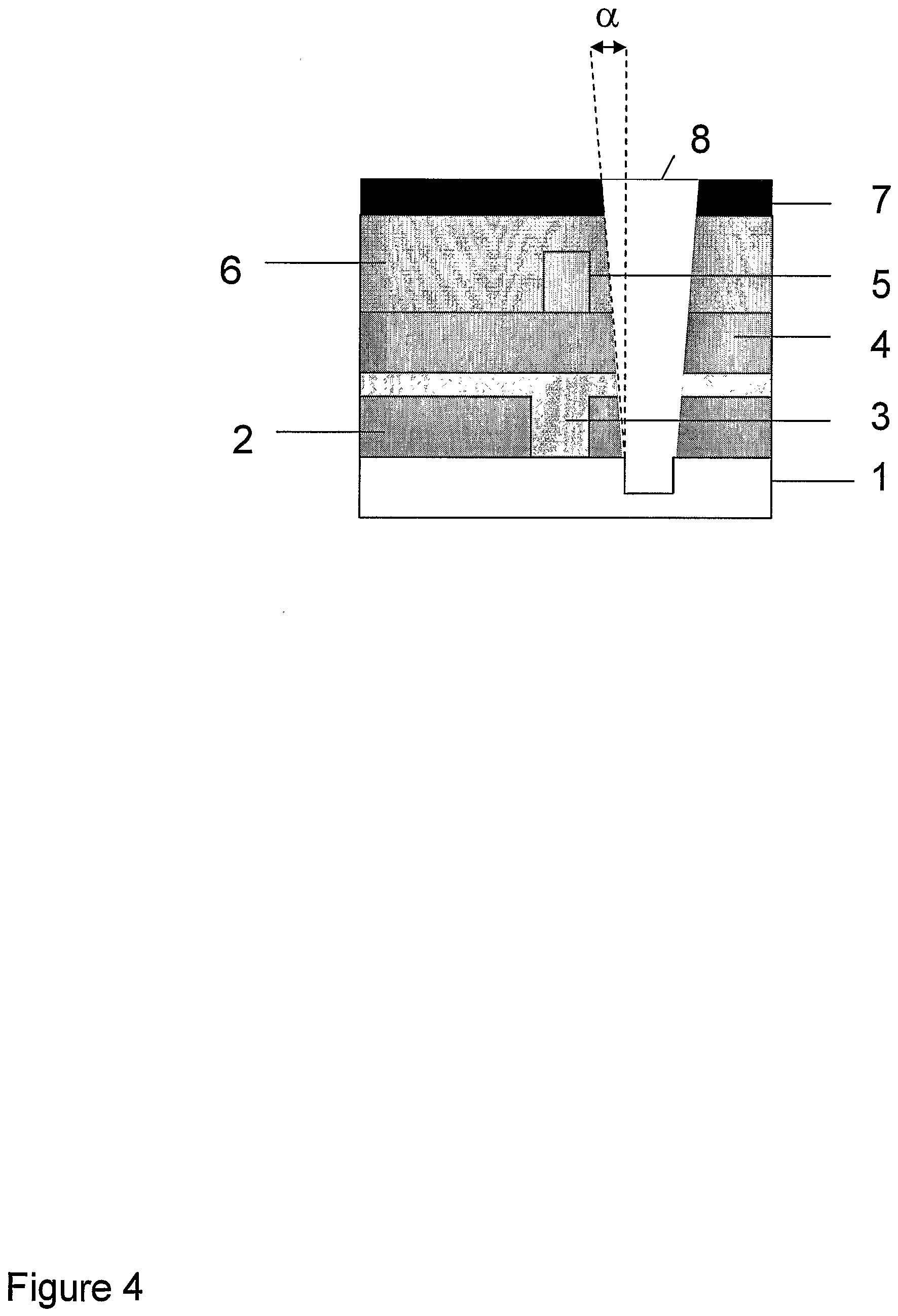 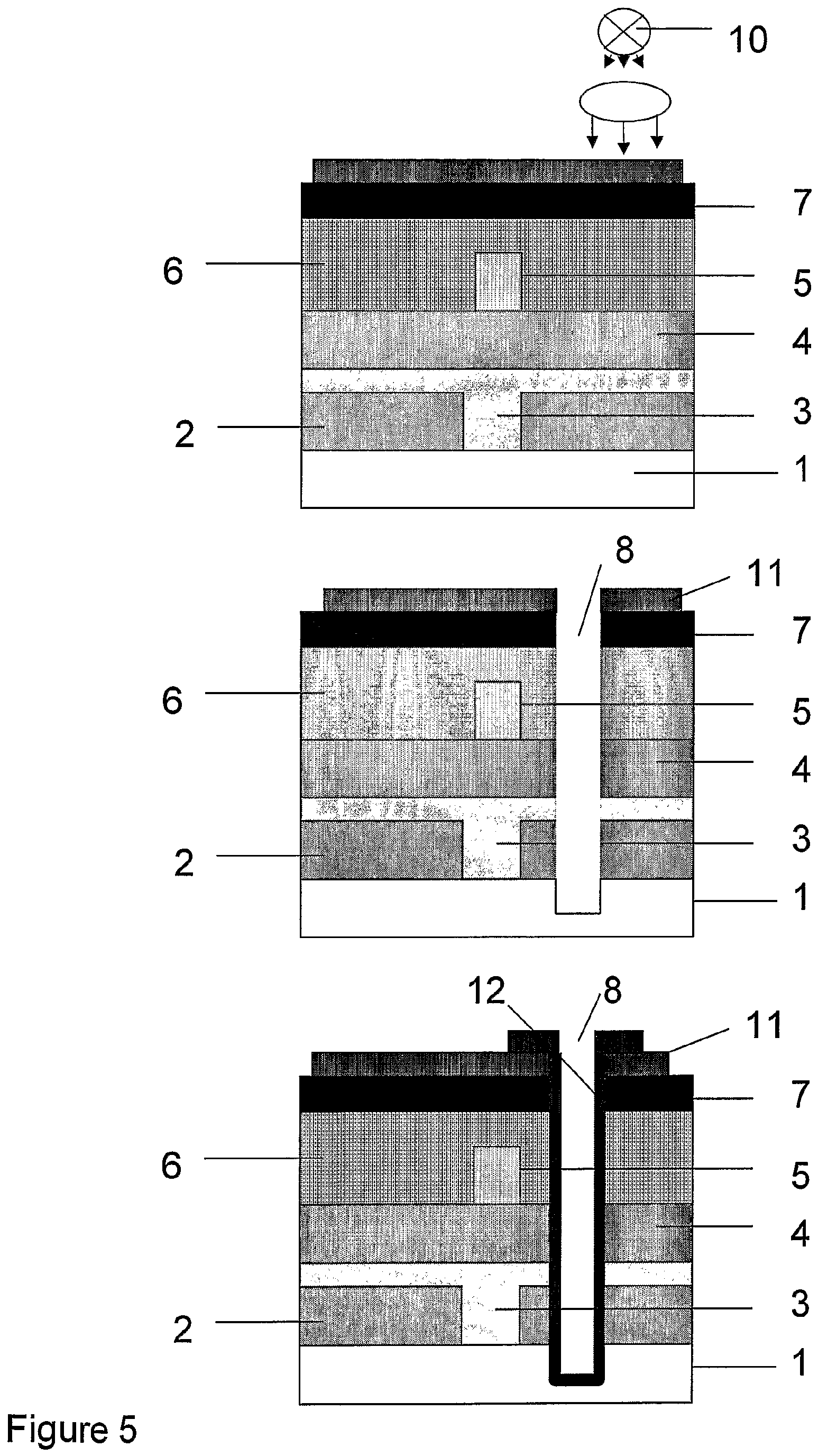 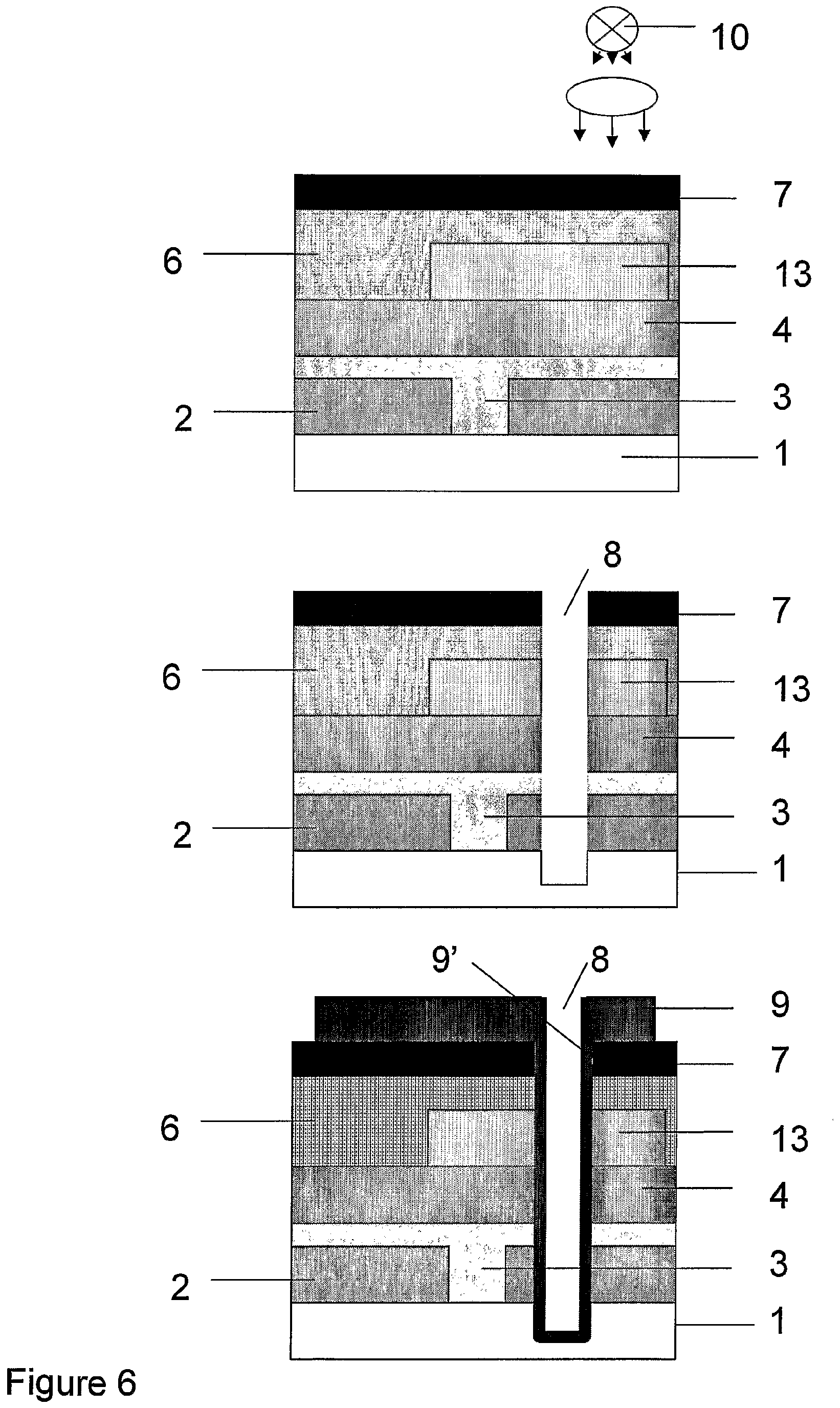 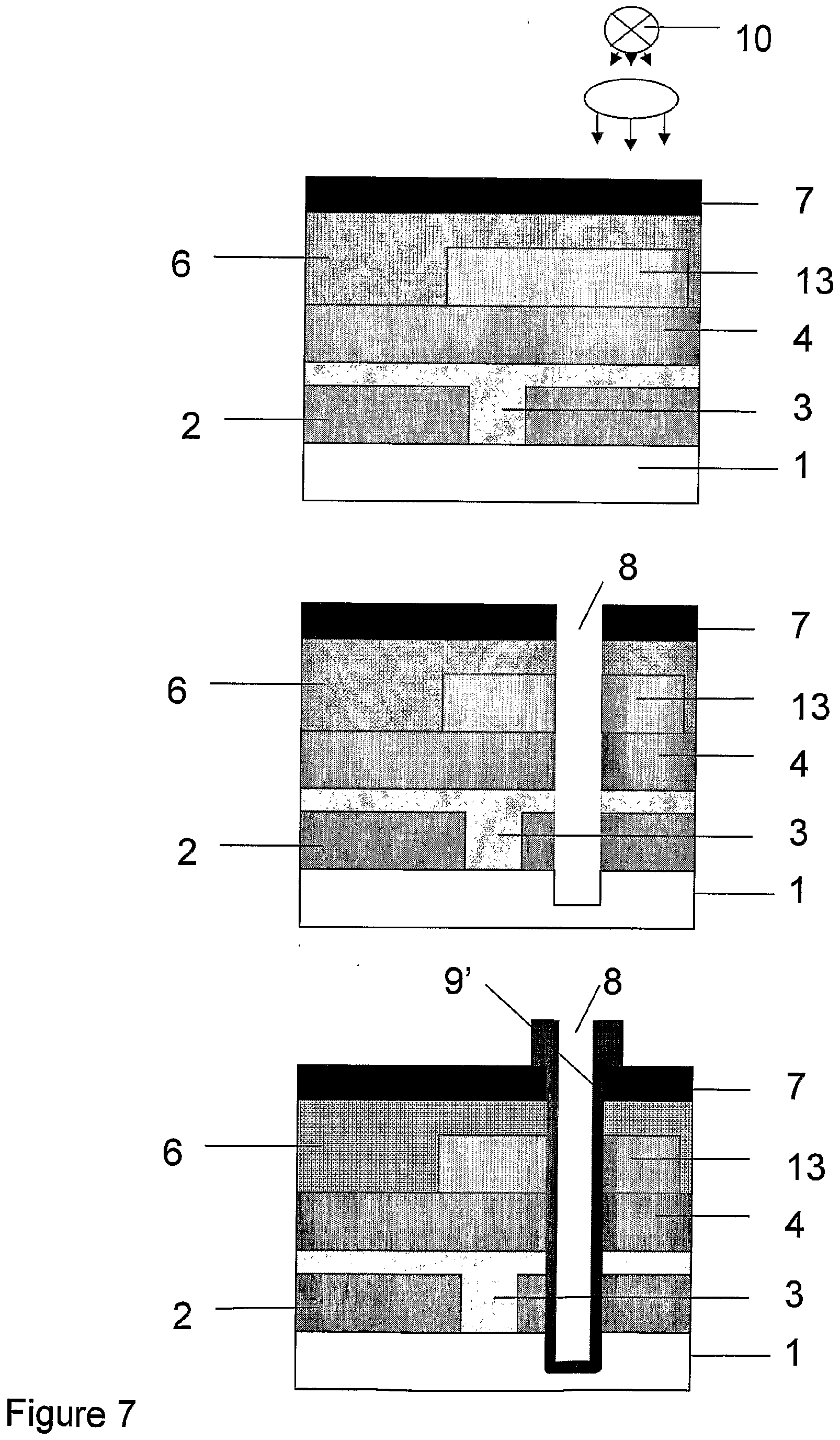