[0002] It has been a common problem, especially in battlefield scenarios, to be able to detect troop movement so that one may know of the presence of hostile forces, whether they are assembled in a group or individually. Intrusion detection has been attempted by radar-type devices, acoustic devices, trip wires, video sensors, seismic sensors and thermal sensors, with these sensors designed either to detect moving vehicles, ordnances or the like, but not directed specifically to the detection of an individual per se.
[0003] The presence of individuals has been detected by trip wires that have to be positioned ahead of time, such that when an individual physically contacts the trip wire, an indication is provided of the presence of the individual. However, this type of mechanical sensor has an extremely high false alarm rate, for instance, when tree limbs or the like fall on them, animals trip over them or are activated by high winds, lightning and other anomalies.
[0004] Infrared has been used in the past to detect the presence of individuals but the use of infrared as a medium is problematic due to changes in scene illumination, such as changes that can occur when a cloud goes overhead.
[0005] Video surveillance is a known technique but requires a tremendous amount of bandwidth and a human being to review the reconstruction of the video scene to ascertain when a person is intruding. Pattern recognition has been employed when using video surveillance. However, pattern recognition requires a large amount of computer overhead, is not necessarily portable and oftentimes fails with changes in the scene, for instance, due to fluttering leaves, moving branches and the like.
[0006] Radar has also been used in attempt to detect intrusion. However, radar only reflects off of objects having a high radar cross-section and is not often used because the radar systems are active systems that reveal their existence and location. Moreover, when the radar is on, individuals know that they have been illuminated, and are thus able to avoid areas swept by radar.
[0007] What is therefore needed is a completely passive system that is extremely low power and is portable, such that the system can be deployed in a stealth fashion so that enemy troops are not aware of the presence of the intrusion sensing system. The system should be resistant to false alarms from such things as animals, falling branches and the like, and should be effective without detectable emissions, thus to provide a completely covert or stealth system.
[0008] WO-A-03/050547 discloses a detection system for detecting electric field (E-field) disturbances using inexpensive miniaturized sensors. The sensors can be easily and covertly deployed and have low power consumption. E-field distortions caused by the spatial imbalance of ions, the presence of static generators, objects in contact with the ground that distort the existing E-field, and high voltage sources are detected. Various sensor arrangements are disclosed for use in the detection system described therein.

[0054] These and other features of the subject invention will be better understood in connection with a Detailed Description, in conjunction with the Drawings, of which:

Figure 2 is a schematic diagram of a single E-field sensor for using the magnitude of E-field change to detect the presence of an individual;

Figure 3 is a schematic diagram of a differential E-field sensor for sensing the presence of an individual;

Figure 4 is a block diagram of an E-field sensor system including the E-field sensor, microcontroller and an interface device for interfacing an alarm or intrusion-sensing event;

Figure 6 is a graph of the output of an E-field sensor during a walk-by of an individual, illustrating the point of closest approach;

Figure 8 is a diagrammatic illustration of a two-axis differential E-field sensor antenna configuration for detecting the presence of and bearing to an individual walking past the sensor;

Figure 9 is a graph of the approximate bearing of the individual relative to the sensor as the individual walks by the sensor, with the graph showing the projection of the E-field vector onto the X-Y plane;

Figure 10 is a schematic diagram of a single-ended E-field sensor with guard circuitry for canceling out stray capacitance from the circuit and other elements;

Figure 11 is a detailed circuit diagram for the circuit of Figure 10 for the single-ended case;

Figure 14 is a diagrammatic illustration of a launchable sensor from an M203 40-mm grenade launcher, illustrating the dartlike proximal end adapted to stick into the ground and housing the subject E-field sensor;

Figure 15 is a diagrammatic illustration of the dart carried by the shell, illustrating the proximal end, the housing for the batteries, and dartlike finned printed circuit boards carrying the E-field sensor and the corresponding light-emitting diodes after having been fired; and,

Figure 16 is a graph of test data from a slow-walking individual past the sensor of Figure 15.

S1(t) is the total signal received at sensor 1

S2(t) is the total signal received at sensor 2

[0096] The signal of interest is somewhat reduced in strength but background noise is essentially eliminated. Thus signal to noise ratio (SNR) is greatly improved.
[0097] Referring now to Figure 13, in one embodiment of the subject invention the sensor module includes a sensor section 400, a bandpass section 402 and a digital processor 404, which includes circuitry to drive an RF transmitter section 406. Note that digital processing section 404 is used to drive a visual LED 408 and an infrared LED 410.
[0098] As to sensor 400, the sensor input 412 is applied in a bootstrap operation to a differential amplifier 414 in much the same manner as described in Figure 11, with differential amplifier 416 and attendant circuitry used for providing a precise voltage reference, precisely ½ Vcc. Note that resistors R1 and R2 split Vcc in half and amplifier 416 is a straight voltage follower to provide the low impedance source of the reference voltage.
[0099] Bandpass filter 402 performs the function as a 60Hz notch filter on LPF out-line 420 and to provide filtered and unfiltered outputs on lines 420 and 422 respectively. The filtered and unfiltered outputs of the bandpass filter as well as the notch filter are applied to terminals 418 and 419 of digital processor 404 corresponding to GP0 and GP1.
[0100] The digital processor, as before, determines the presence of an intruder and drives LED 408 and LED 410 over line 426.
[0101] A crystal 428 controls the digital processor and also forms the basis for providing an RF signal out on line 428, which is the antenna output that drives antenna 430 through a matching arrangement 432. Note that Vcc is filtered by inductor L1, capacitor C13 and resistor R17, all of which constitute a tank circuit for the transmitter. This circuit smoothes out the digital output of the processor 404 to obtain a sine wave.
[0102] In one embodiment the transmission to a remote location indicating the presence of an individual is accomplished using either an FSK link or an ASK link so that the module depicted in Figure 13 can provide one of three intrusion detection functions, namely visual, infrared or RF. Note that the indicators listed above need only be drive upon detection of an intruder.
[0103] Referring now to Figure 14, in order to be able to deploy the subject intrusion sensors over a wide area, the sensors may be carried in a dart 500 that is launched by a grenade launcher 502 that propels dart 500 out of a shell casing 504 when the trigger pin contacts trigger 506 in the center of the shell.
[0104] As illustrated in Figure 15, dart 500 includes a sharpened tip 510, batteries 512 and a pair of orthogonally-oriented circuit boards 514 and 516. These two orthogonally-oriented circuit boards are configured to provide fins to stabilize the dart during flight and to assume that the dart has a controllable trajectory that leaves it stuck in the ground point down. Note that batteries 512 weight the dart to achieve ground penetration.
[0105] Printed circuit boards 514 and 516 carry the aforementioned sensor and control circuits, with LEDs 518 and 520 respectively providing light in either the visible region of the electromagnetic spectrum of in the invisible region of the electromagnetic spectrum.
[0106] With numerous of these darts deployed over a terrain to be surveilled, one can detect and track the existence of an individual due to the illumination of the LEDs.
[0107] Referring to Figure 16, test data for a differential E-field sensor carried by a dart is shown to indicate the detection of an individual within +/- 15 feet of the dart. Note that the point of closest approach is shown by spikes 530, which exceed a threshold set as indicated by line 532. Note also that spikes 534, 536, 538 and 540 exceed the threshold set at 532.
[0108] What will be apparent is that the presence of an individual moving with respect to the sensor may be detected in terms of the distortion or tilt of the E-field near the sensor, such that not only can the presence of an individual be sensed, a signature corresponding to the individual's footsteps can also be derived.
[0109] As part of the subject system, light-emitting diodes are used at the sensor's location to indicate, when driven, the existence of the individual in the vicinity of the sensor as well as the path of the individual through the sensor field. Thus it is a part of the subject invention to indicate intrusion without having to use geolocation techniques by merely observing the illumination of the LEDs or other light sources carried by the sensors.
[0110] As mentioned, the system is totally passive, it being possible to make the communication of the individual's position totally invisible to the individual. Thus the subject system is a totally passive system in which no radiation need be generated in order to detect intruders.
[0111] While the present invention has been described in connection with the preferred embodiments of the various figures, it is to be understood that other similar embodiments may be used or modifications or additions may be made to the described embodiment for performing the same function of the present invention without deviating therefrom. Therefore, the present invention should not be limited to any single embodiment, but rather construed in breadth and scope in accordance with the recitation of the appended claims.

a processor (404) coupled to said E-field sensor (400) for detecting when a change in sensed E-field exceeds a predetermined threshold caused by the presence of an individual through said protected area; and

output means (406, 408, 410) for providing output signals indicative of the presence of an individual in said protected area;

characterized in that said output means (406, 408, 410) includes light-emitting elements (408, 410) that is activated when said predetermined threshold is exceeded; 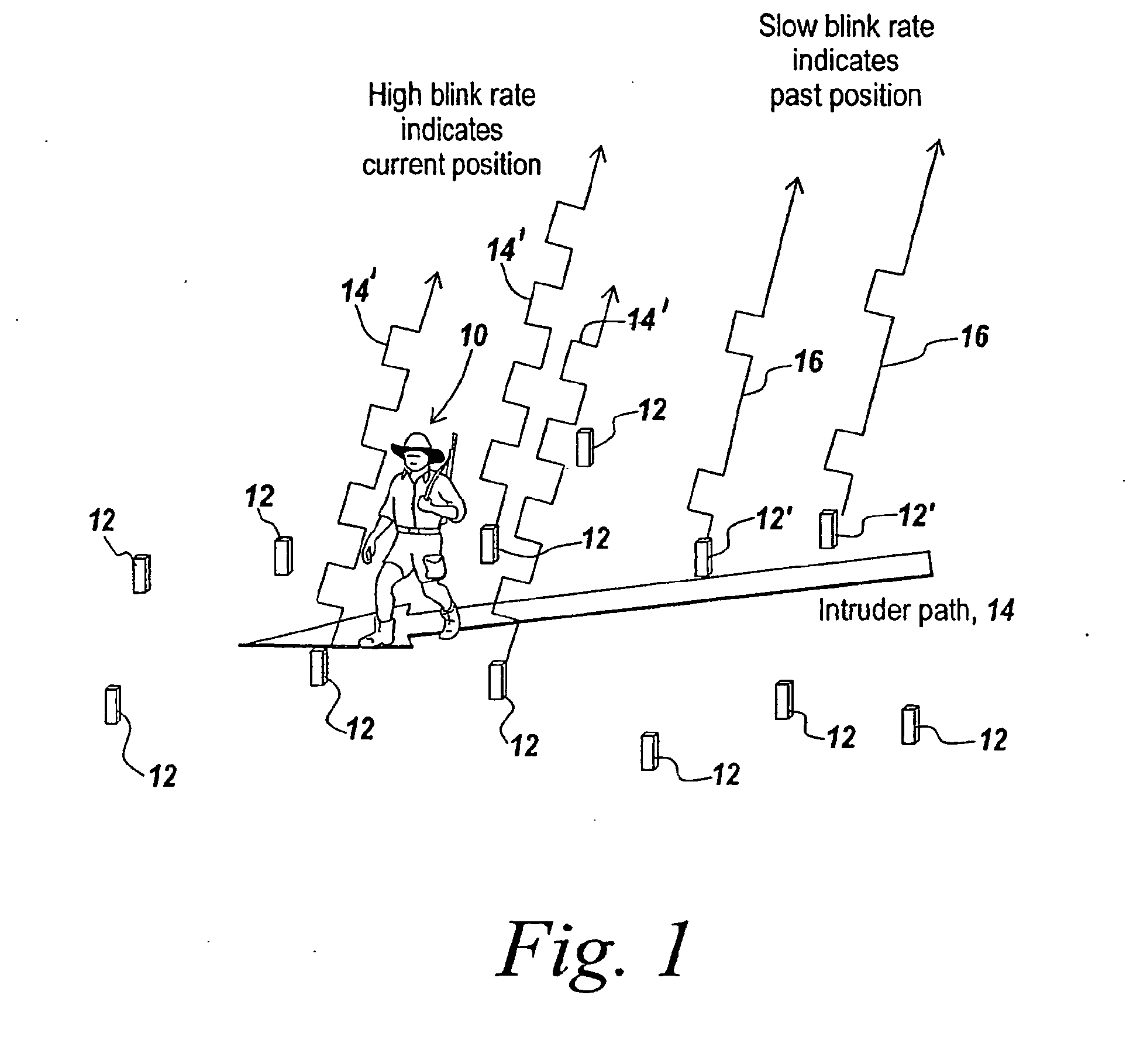 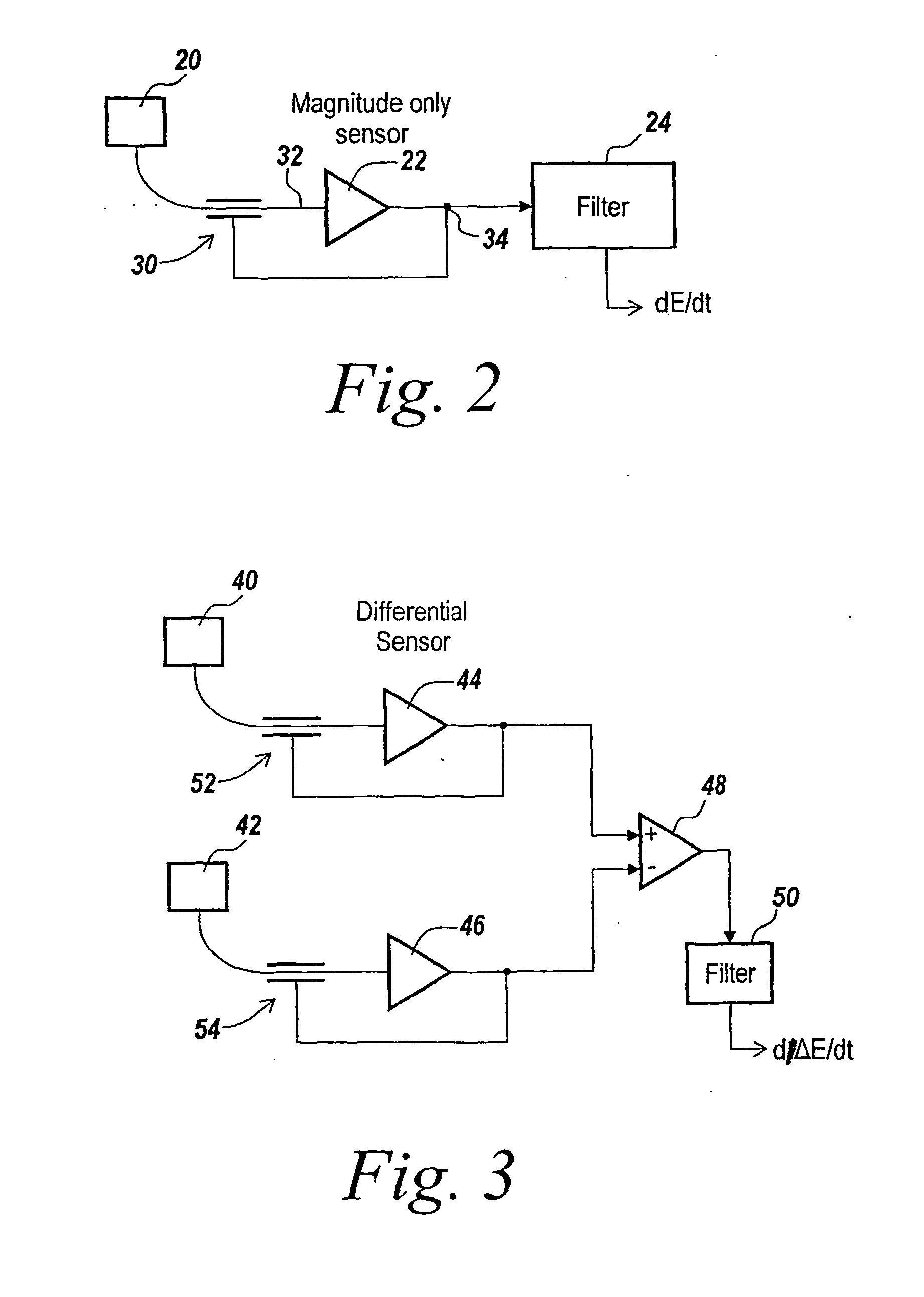 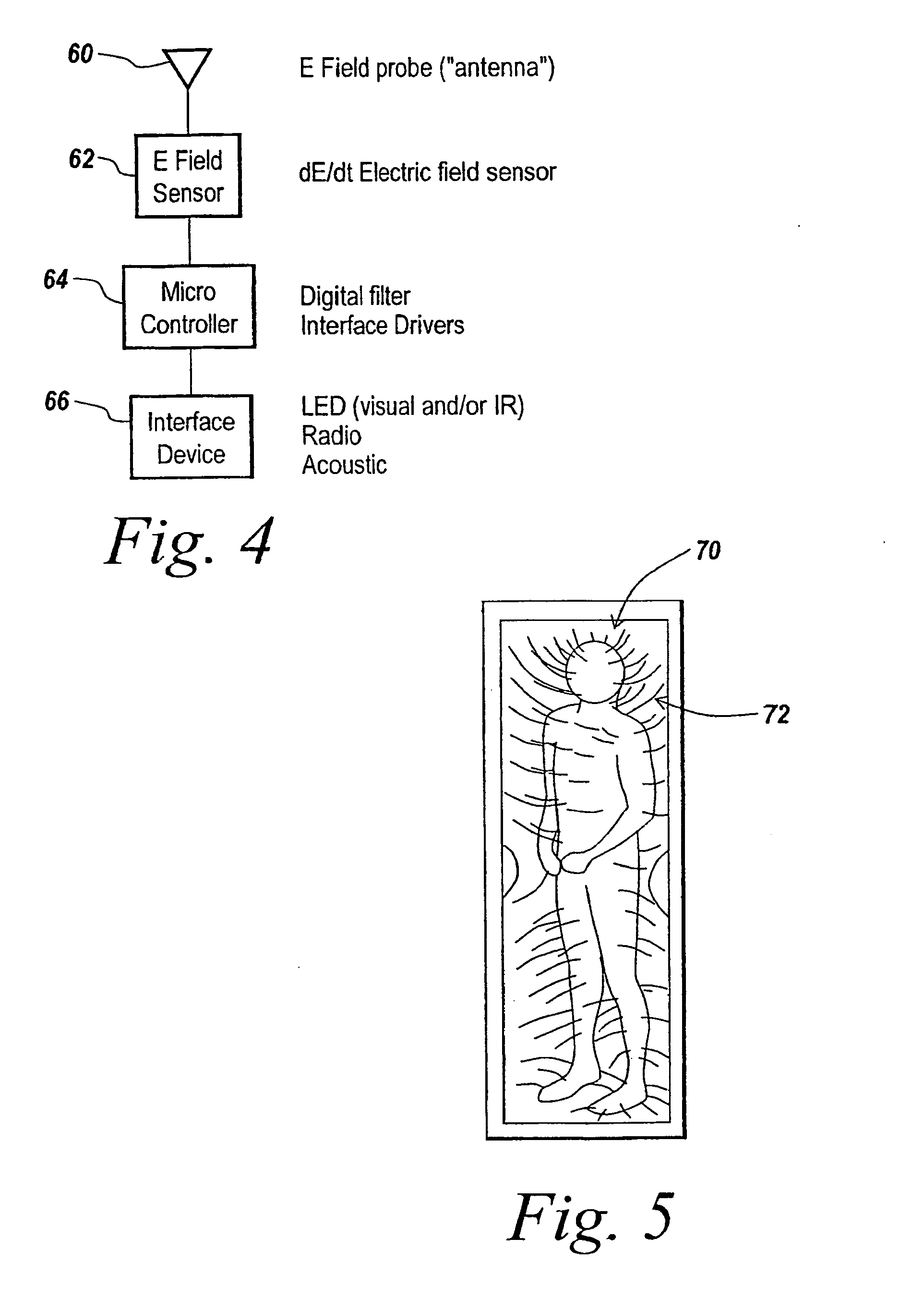 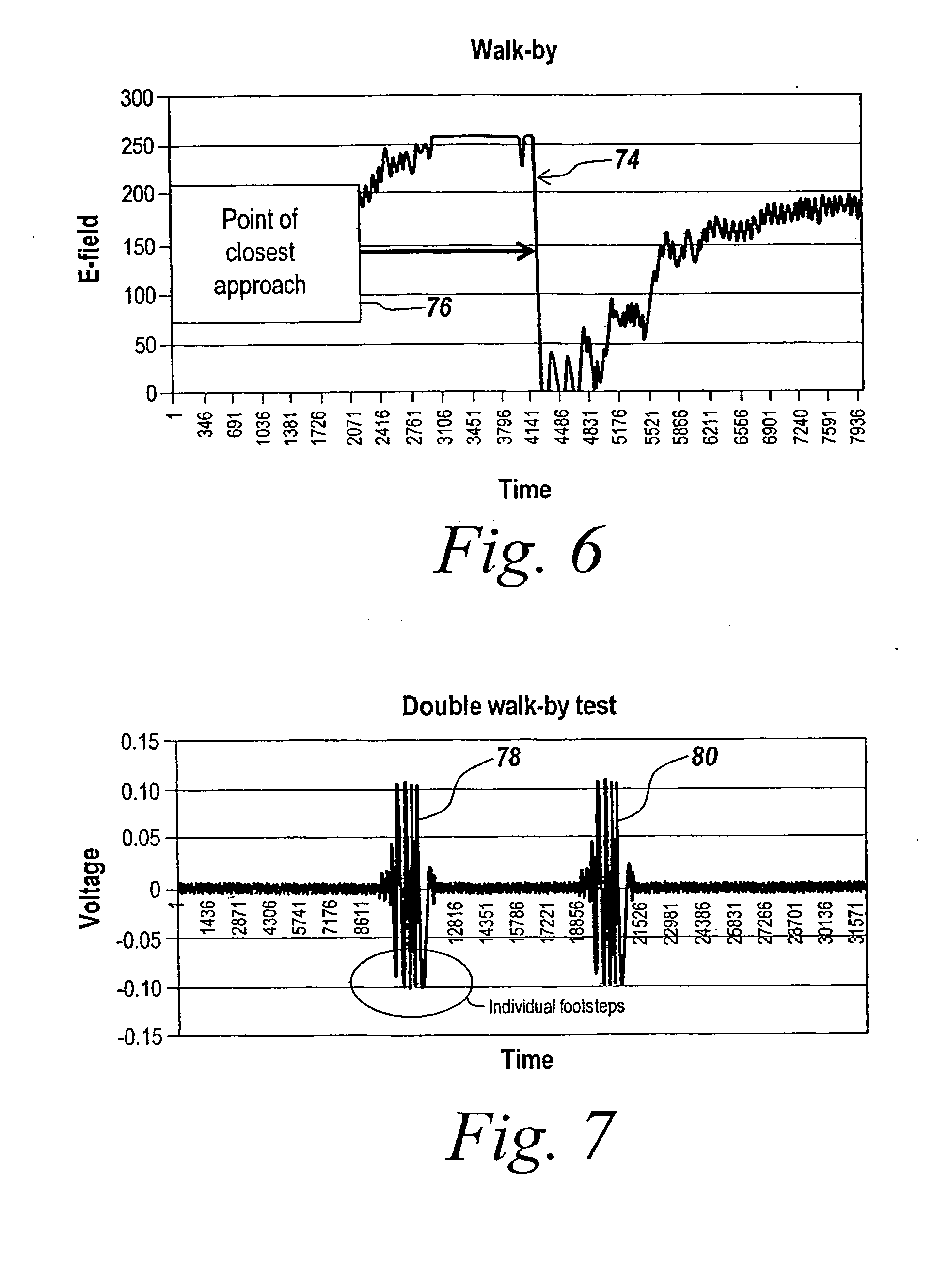 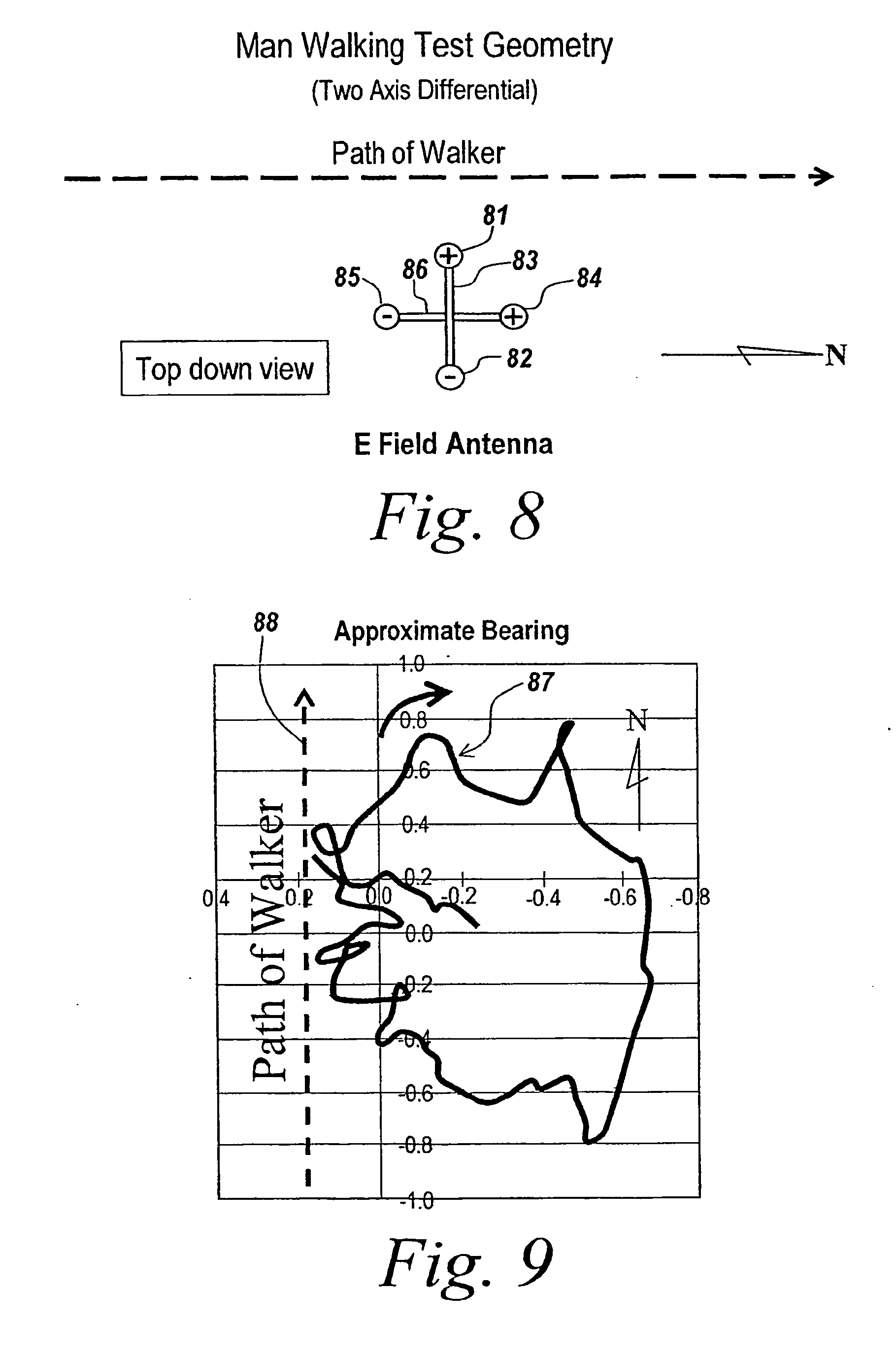 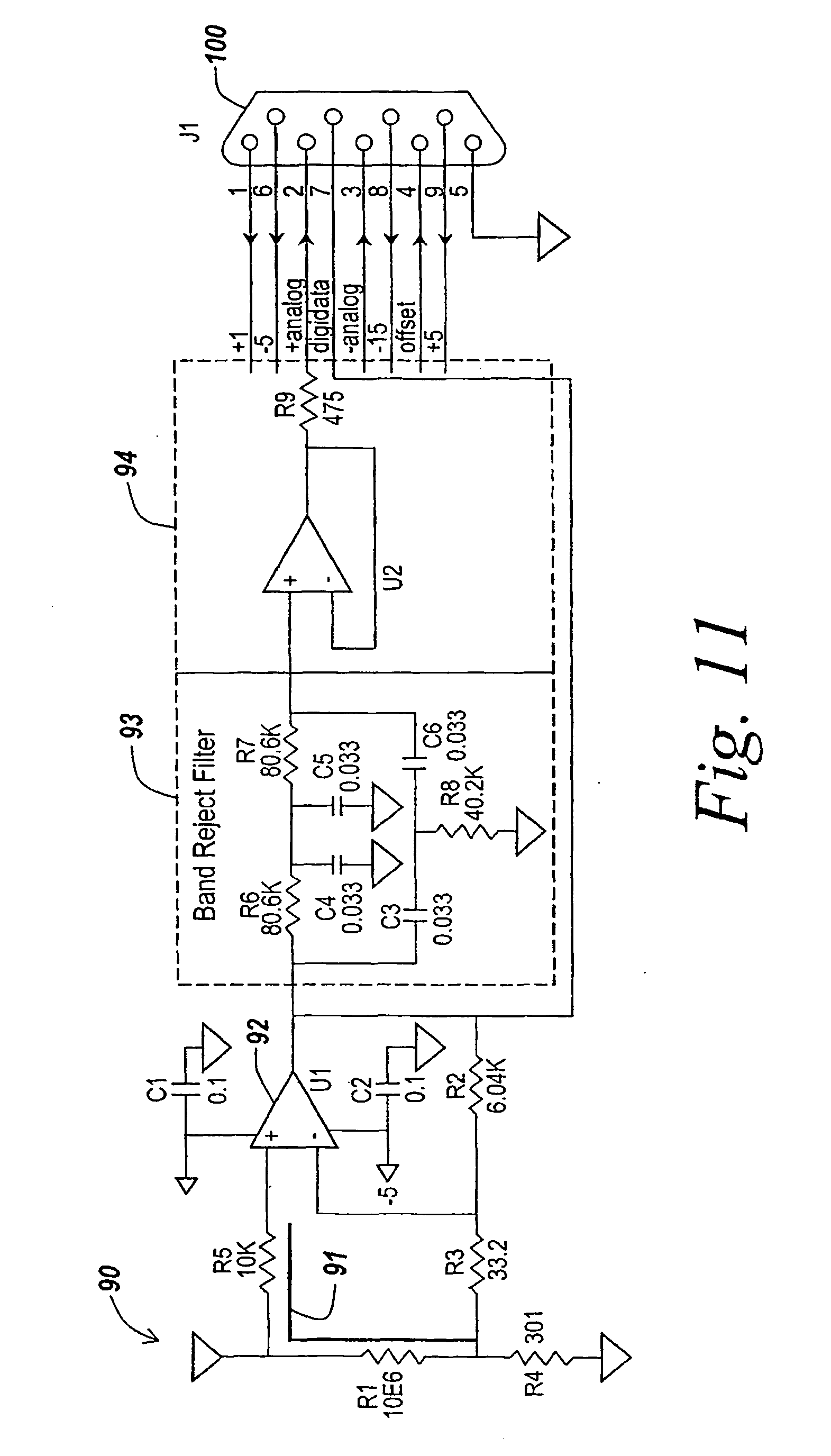 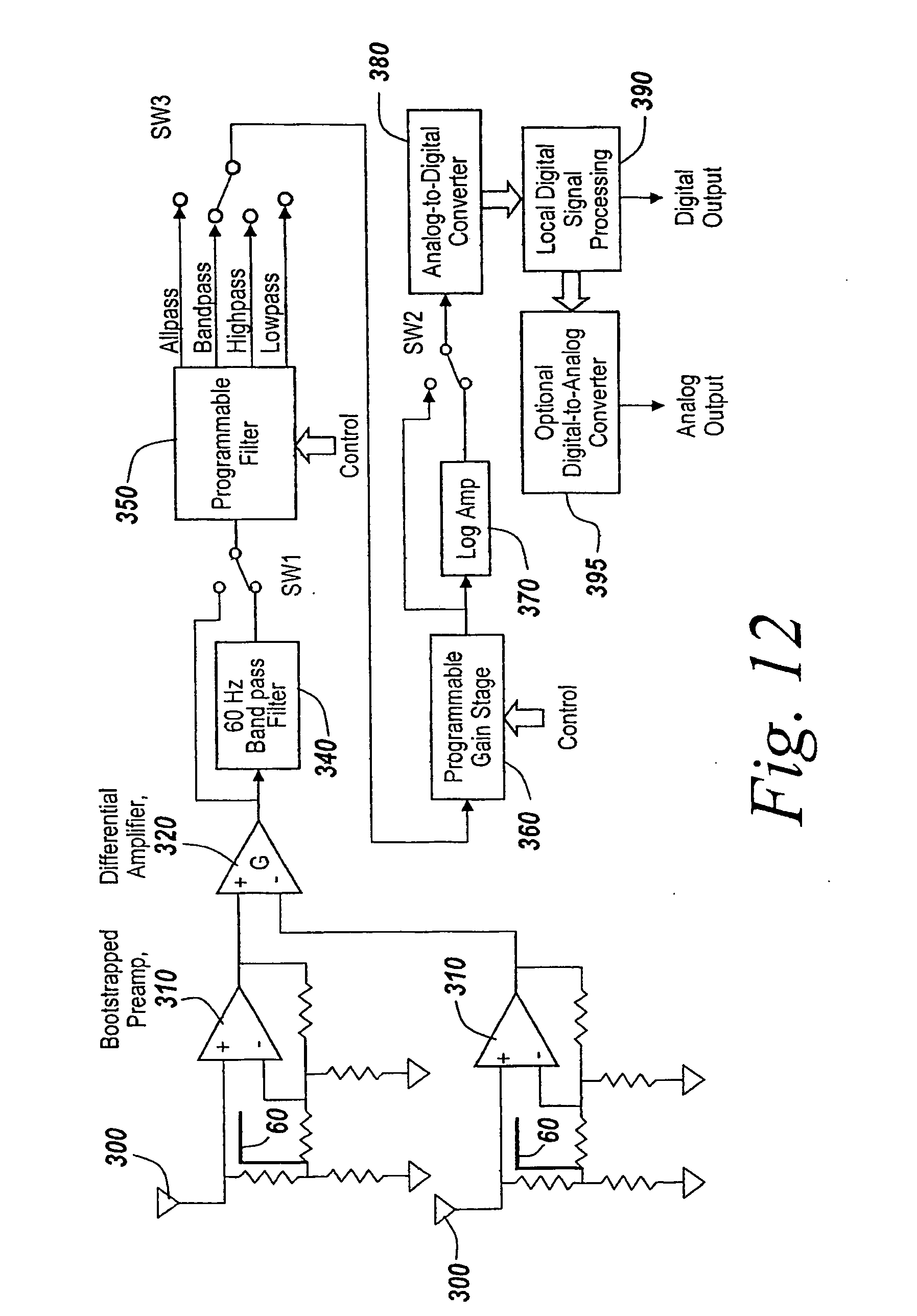 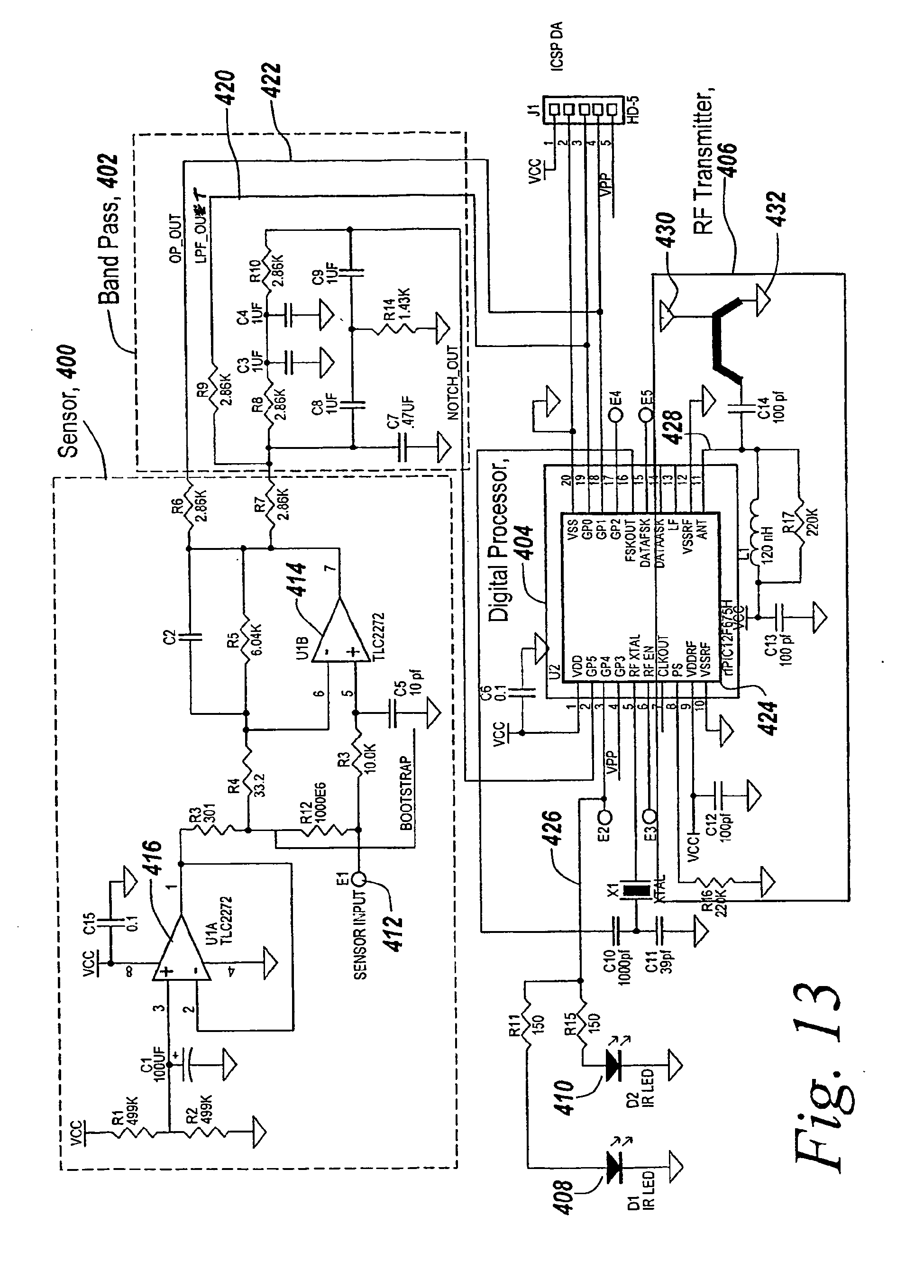 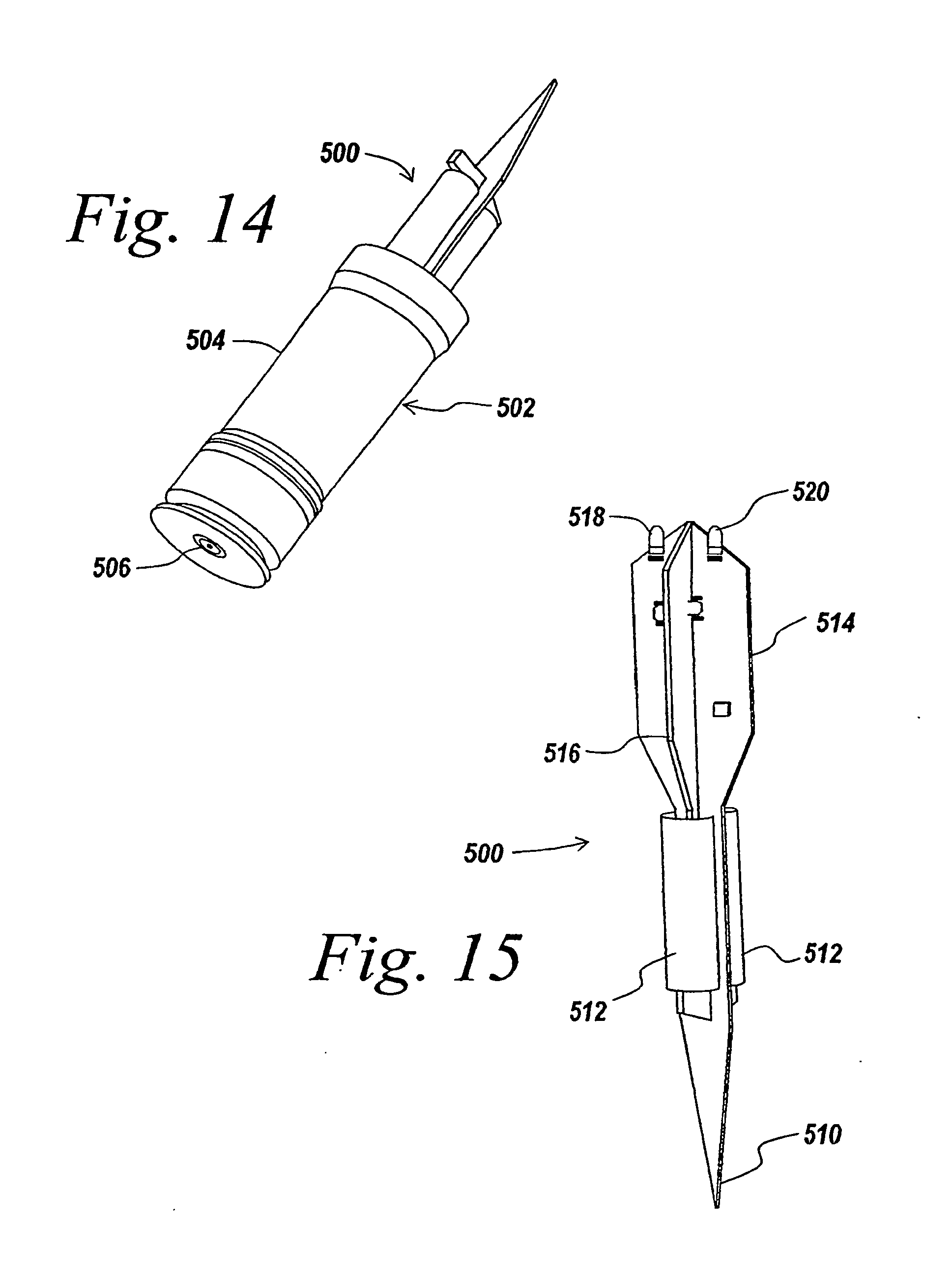 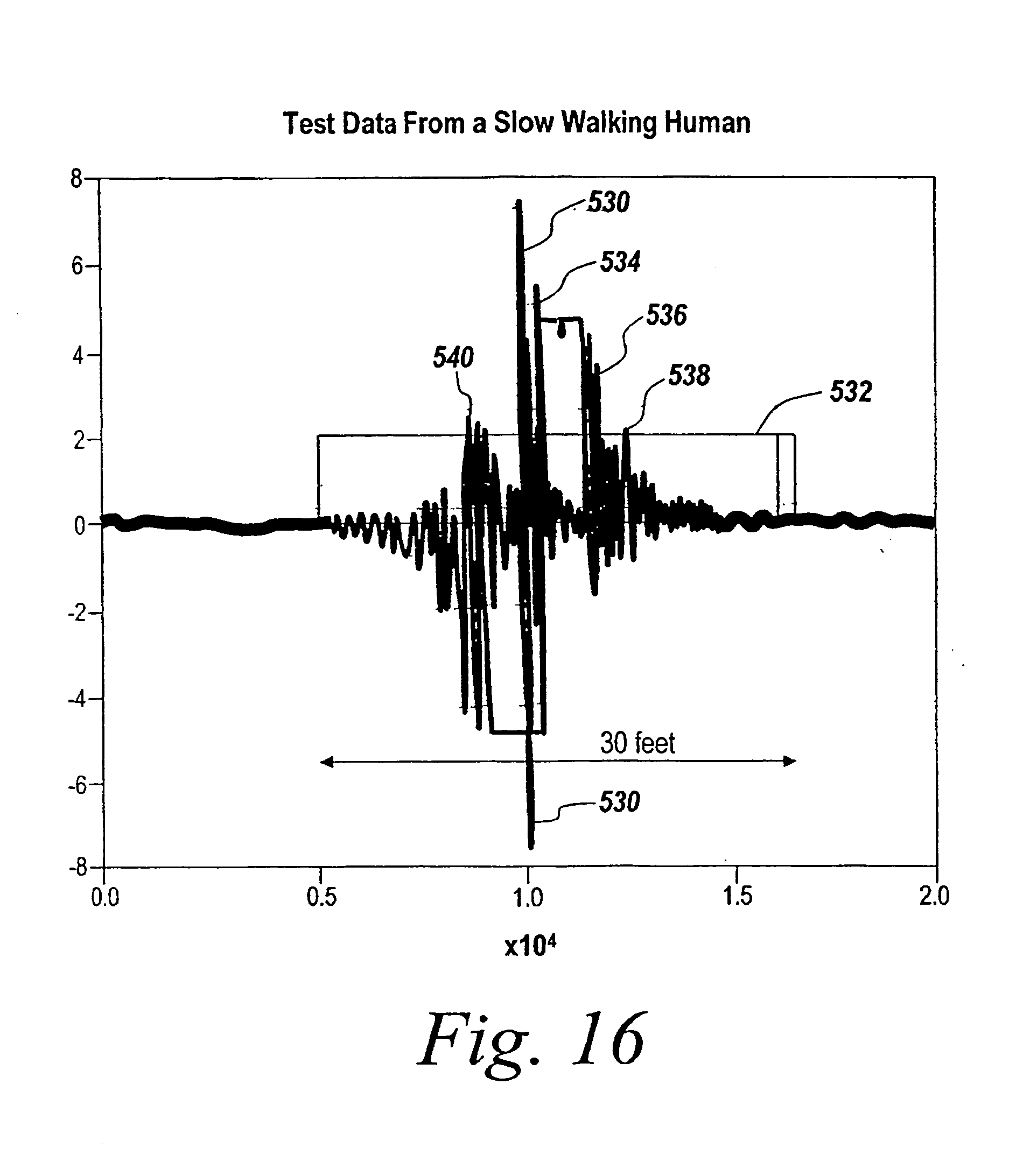