[0001] The present invention relates to preparation of samples for viewing in charged particle beam systems.

[0015] An object of the invention is to provide a method according to claim 1.
[0016] This invention facilitates altering the orientation of a charged particle beam sample in a charged particle beam system and is useful, for example, for preparing a planar view TEM sample. A probe comprising a shaft and having an angled tip is attached to the sample. By rotating the shaft through a first angle, the sample orientation is rotated by a second angle. Knowing the orientation of the longitudinal shaft axis with respect to the sample stage plane, and knowing the angle of the probe tip with respect to the longitudinal shaft axis, one can determine an angle of rotation of the shaft that will rotate the sample orientation by precisely ninety degrees or by any other desired angle. If the longitudinal axis of the shaft is oriented at 45 degrees with respect to the sample stage plane, and the probe tip surface is oriented at 45 degrees with respect to the shaft longitudinal axis, then by rotating the probe shaft 180 degrees, the sample orientation is altered by ninety degrees, from horizontal to vertical. The sample can be rotated so that it is at a convenient angle for attaching to a TEM grid so that the sample can be thinned by a charged particle beam system without removing the sample from
[0017]  the system for reorientation and without requiring a special stage. Reorienting the sample can facilitate subjecting the sample to other processing, such as laser processing or scanning electron beam microscopy, and the invention is not limited to preparing TEM samples.
[0018] The foregoing has outlined rather broadly the features and technical advantages of the present invention in order that the detailed description of the invention that follows may be better understood. Additional features and advantages of the invention will be described hereinafter. It should be appreciated by those skilled in the art that the conception and specific embodiment disclosed may be readily utilized as a basis for modifying or designing other structures for carrying out the same purposes of the present invention. It should also be realized by those skilled in the art that such equivalent constructions do not depart from the scope of the invention as set forth in the appended claims.

[0019] For a more through understanding of the present invention, and advantages thereof, reference is now made to the following descriptions taken in conjunction with the accompanying drawings, in which:

FIG. 1 shows a typical TEM grid to which a sample is attached.

FIG. 2 shows a cross-sectional TEM sample being extracted from a work piece.

FIG. 3 shows the cross-sectional TEM sample of FIG. 2 being mounted on the TEM grid of FIG. 1.

FIG. 4 shows the sample and grid of FIG. 3 tilted and rotated for thinning the sample using an ion beam.

FIG. 5 shows a planar view TEM sample being extracted from a work piece.

FIG. 7 is a flow chart showing the steps of a preferred embodiment of the present invention.

FIG. 8 shows a probe used in a preferred embodiment of the invention.

FIG. 10 shows the probe of FIG. 8 with a sample attached.

FIG. 11 shows the probe of FIG. 10 rotated 180 degrees to change the orientation of the sample.

FIG. 13 shows the TEM grid of FIG. 12 on a stage that has been rotated and tilted to orient the sample for ion beam thinning.

1. A method of manipulating a sample to form a planar view TEM sample in a charged particle beam system including an ion beam column, the method comprising:

attaching a probe (216) to the sample;
wherein,

the probe includes a shaft (802) having a shaft axis (804), the shaft axis oriented at a shaft angle (812) of about 45 degrees in relation to the sample stage plane and the major surface in its untilted orientation;

detaching (722) the probe from the sample;

thinning (726) the sample on the TEM sample holder with the ion beam (204) to remove material from the wedge-shaped backside of the sample to form a planar view TEM sample having a sample face parallel to the major surface, all of the previous steps accomplished without removing the sample from the vacuum chamber. 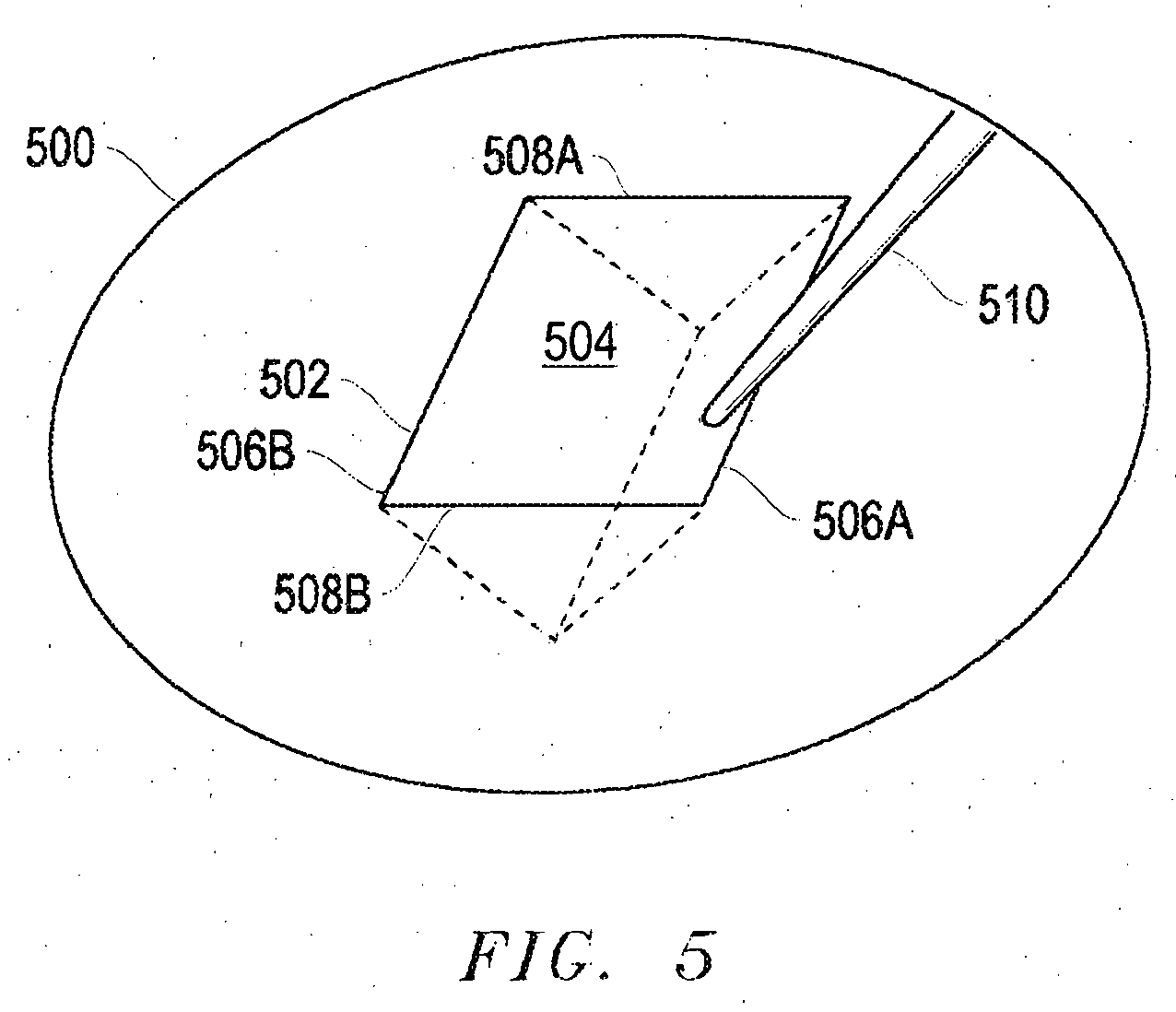