[0001] This invention relates generally to diesel engines and more particularly to coatings used to protect the various power cylinder components of the power cylinder including the piston.

[0002] Many ways and means exist to protect in-cylinder diesel engine components from deleterious effects of combustion by-products, notably when EGR (exhaust gas recirculation) is used in the engine. Also, it has been proposed to use coatings as joint tribological elements in lieu of bushings and bearings and the like. As examples of the latter, manganese phosphate, DLC (diamond-lilce-coatings), many variations of PVD (physical vapor deposition)-derived coatings, electroless and electroplated layers.
[0003] With widespread use of high pressure diesel engine injection systems (common rail, electronic unit injectors, hydraulic electronic unit injectors) piston bowl rim oxidation/erosion by the torch-like effects from each combusting fuel plume are becoming commonplace. Also, due to late fuel injection timing necessary to preclude NOx formation, instances of liner fuel overspray have been documented. On the other extreme, early or pilot injection might deposit liquid fuel on piston tops that remains unburnt for most of the compression stroke. There are several side effects to these conditions inherent with high pressure diesel injections systems, including: 1) the build-up of carbon deposits on the top land of diesel engine pistons, 2) the deterioration of the oil film at top dead center/top ring reversal point on the liner and 3) piston erosion (pitting) particularly where the plumes from the injectors fire on the top bowl edge of the piston.
[0004] Top land carbon build up is historically singled out as the root cause of bore polishing and subsequent lubricant oil control loss. Emissions are then adversely affected.
[0005] Liner overspray with fuel dilutes and contaminates the oil film, greatly affecting the ability of the squeeze film to handle the first ring contact load. Fuel overspray also depletes the lubricant TBN reserve and entrains soot into the oil film. The net effect is the formation of a corrosive/abrasive medium which wears out components in intimate contact with the medium. Chemical etching (corrosion) of the liner on the first 20 to 40 mm of the piston travel from TDC not only leads to accelerated local wear, but also leads to higher ring peripheral (OD) face wear.
[0006] Local uncontrolled (explosive) deposited fuel burn creates extremely high thermal and mechanical stressing of the piston material. Eventually pitting occurs and will structurally weaken reentrant combustion bowl overhang lip and breakage can occur. Further out towards the piston OD, craters can be dug into the metal substrate. Emissions and overall engine performance are adversely affected. These factors may combine in such a way as to aggravate first ring groove wear in high pressure/high thermal loaded diesel engines.
[0007] What has been described thus far are typical problems, to a greater or lesser degree, derived from in-cylinder environment created by emissionized engines having EGR. In addition, the high rate of pressure rise and high peak combustion pressure characteristic of modern diesel engines slap the piston against and excite the liner's vibratory motions, triggering liner cavitation which can be a major problem itself. Skirt coatings (polymer based or graphite impregnated) are expected to help diminish cavitation but they bring additional problems of their own, besides being cumbersome to apply during manufacture.
[0008] US 4,974,498 generally describes the modification of internal combustion engines and/or components thereof by applying thin coatings or films of synthetic diamond or diamond-like materials thereto and, in certain cases, overcoating such synthetic diamond materials with a thin layer of chromium for providing protective effects. For example, an overcoating of a hard film chromium may be applied to certain engine components against the synthetic diamond material to protect the same against particle erosion and aberration.
[0009] JP2004018979 discloses an engine with a DLC coating on a sliding member surface such as the piston ring or the skirt of the piston. Chromium is mentioned as a possible metal of the matrix.

[0010] The present invention is defined by the appended independent claim being directed to a diesel engine piston assembly. The related dependent claims are directed to optional features and preferred embodiments.
[0011] The inventor has found that an electroplate coating typically used in the stamping industry, and sometimes used in the auto racing field to coat the skirts of gasoline engine pistons which do not suffer from the problems described above in connection with high pressure diesel engines with EGR, is highly effective in overcoming or greatly minimizing the deleterious effects that the diesel engine environment has on steel pistons as described above. "DIA-CLUST" is a trademark of a product used by some electroplating job shops in the United States. The process was developed to increase the life of intricate stamping dies. It consists of electroplating in-place a mixed layer of chromium and industrial diamonds. The diamond clusters are extremely small (less than 40 nm) in size. The electroplated layer exhibits a very smooth surface and a very low coefficient of friction (about 0.08). The coating for diesel engine applications is on the order of about 2 to 10 µm.
[0012] The chromium in the layer imparts corrosion and oxidation resistance to the power cylinder components coated with the composite chromium/diamond coating and is responsible for reduced groove wear/pin bore triboligical behavior and top land carbon build up avoidiance. The combined effects of the Cr and diamond clusters also impart resistance to skuffing of the skirt portions of the piston and cavititation of the liner, thus enabling pistons to run at much tighter running clearances, when applied to piston skirts without concern for localized welding or seizing of the piston within the liner. Mitigating liner cavitation is tantamount to reducing assembly clearances afforded by the lubricious nature of the coating.
[0013] A diesel engine piston assembly according to one aspect of the invention includes a piston body having a top wall with a combustion bowl formed in the top wall and having a combustion bowl edge, an outer ring belt formed with a plurality of ring grooves including a top ring groove with an upper wall of said top ring groove and a top land portion of the ring belt disposed between the top ring groove and the top wall, a pair of pin bosses with aligned pin bores and a skirt. A diamond dispersed chromium composite coating is applied to at least the top wall, the combustion bowl edge, the top land portion and the upper wall of the top ring groove.
[0014] According to a further aspect of the present disclosure, a power cylinder assembly includes a piston having a top surface, at least one ring groove with groove wall surfaces and at least one pin bore with a pin bore surface; at least one piston ring with an outer diameter surface, an inner diameter surface and top and bottom surfaces; a connecting rod having one end with a small bore opening and an opposite end with a large bore opening; a wrist pin having an outer surface; a cylinder liner having an inner cylinder wall; and a diamond dispersed chromium composite coating applied to at least a portion of the top surface of the piston, one of either a top wall surface of the at least one ring groove and the top surface of the piston ring, one of either the outer diameter surface of the piston ring and the inner cylinder wall of the cylinder liner, one of either of the outer surface of the wrist pin or the surfaces of the pin bore of the piston and the small bore opening of the connecting rod.

[0015] These and other features and advantages of the present invention will become more readily appreciated when considered in connection with the following detailed description and appended drawings, wherein:

Figure 1 is a schematic perspective view of a piston;

Figure 2 is a schematic perspective view of a piston ring;

Figure 3 is a schematic perspective view of a wrist pin;

Figure 4 is a schematic perspective view of a cylinder liner.

Figure 5 is a schematic perspective view of a connecting rod;

Figure 6 is a schematic perspective view of a plain engine bearing.

Figure 7 is a diagrammatic view of a portion of the piston shown during plating;

Figure 8 is a fragmentary perspective view showing a pin boss portion of the piston of Figure 1;

Figure 9 is a perspective elevation view of the piston;

Figure 10 is a split cross-sectional elevation view of the piston; and

Figure 11 is a schematic illustration of a power cylinder assembly. 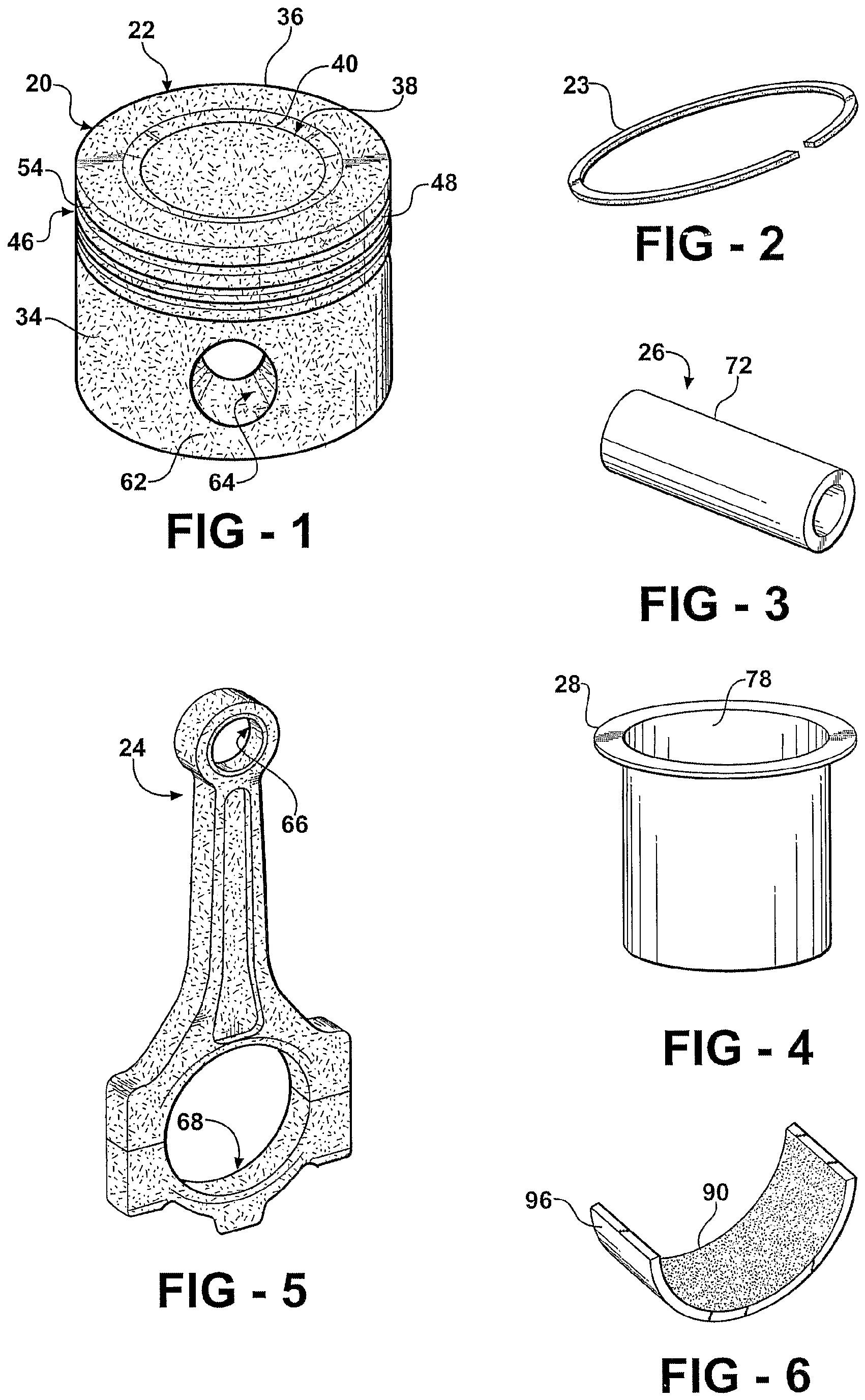 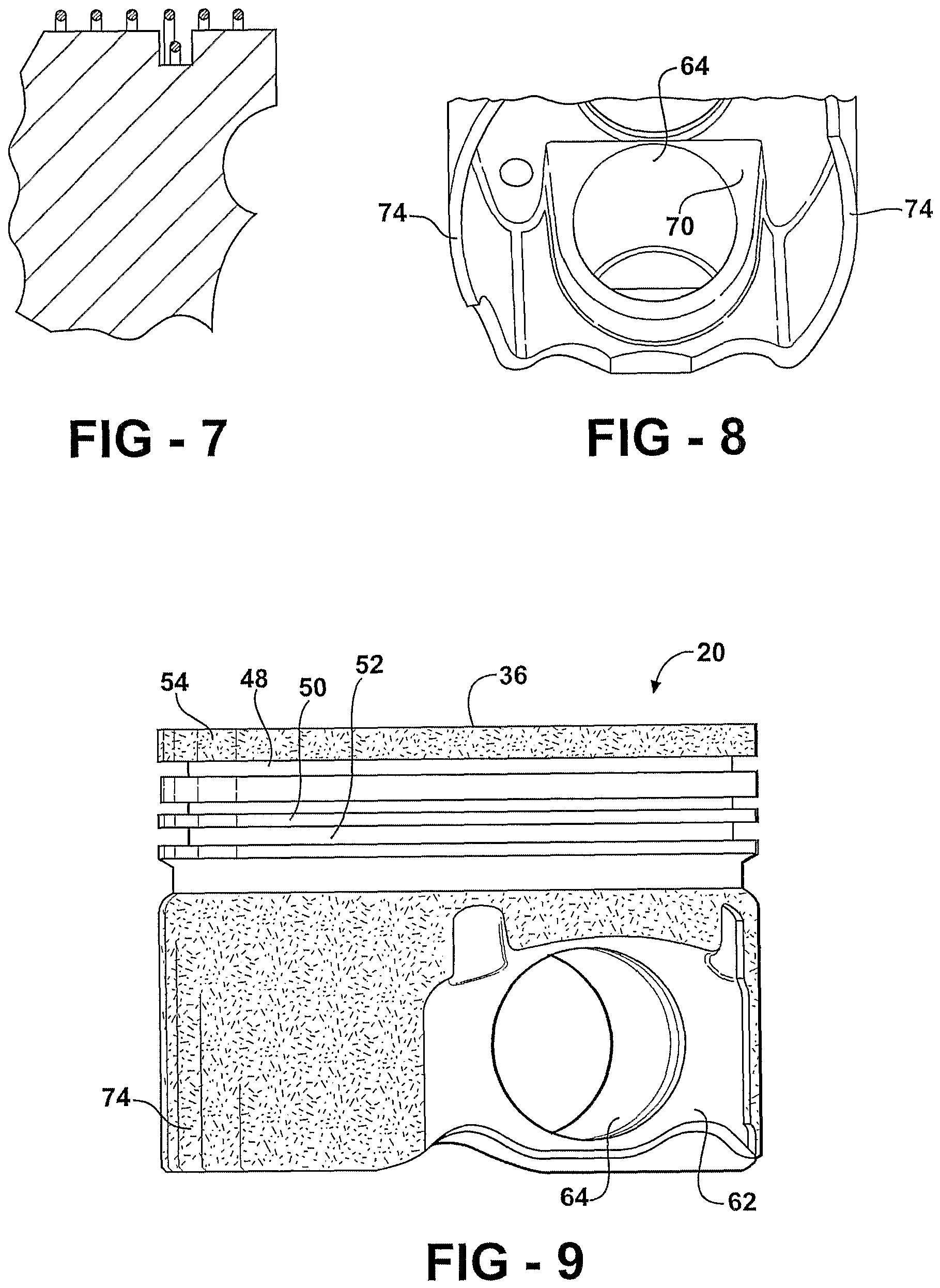 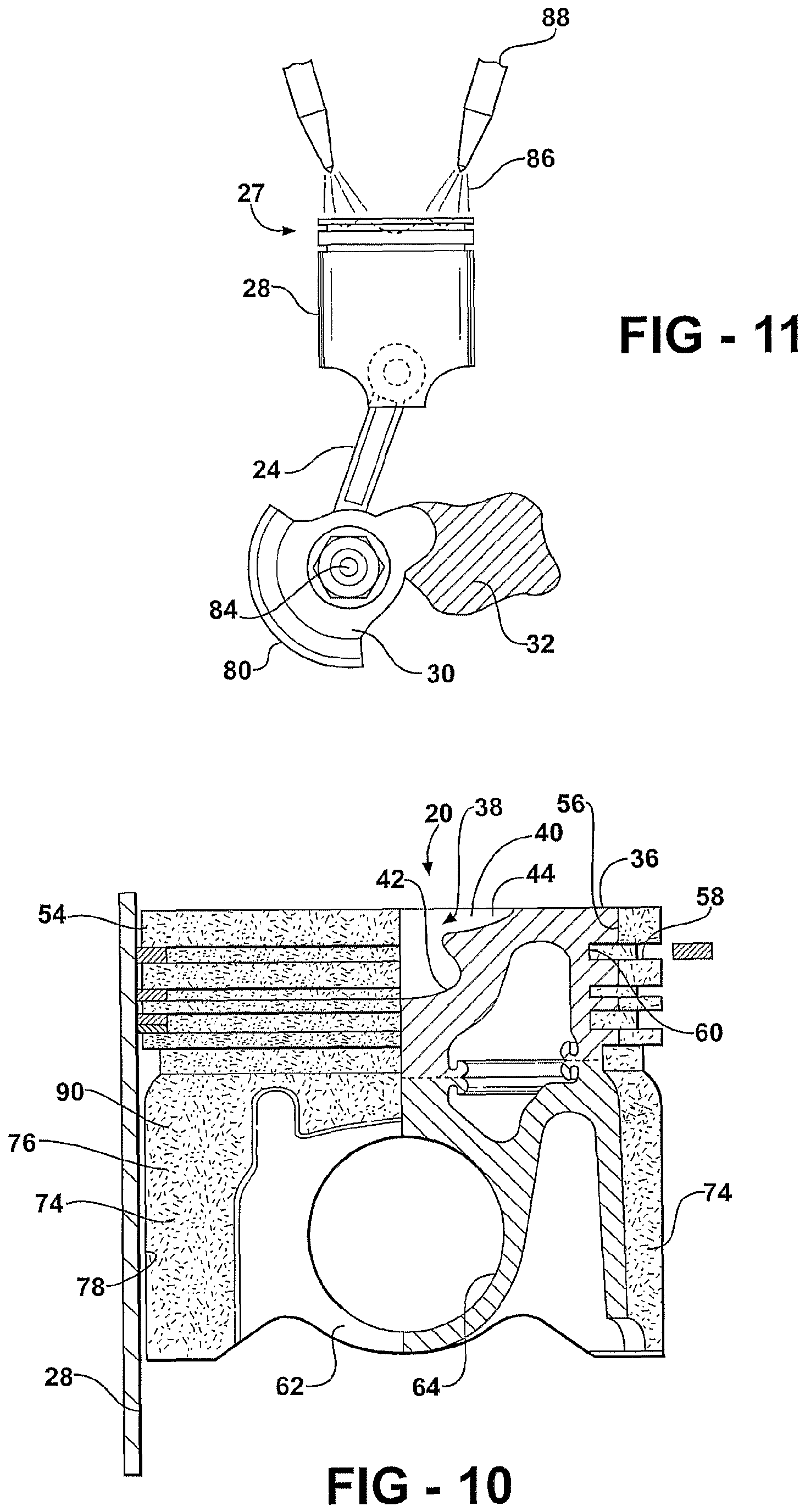