[0002] One limitation of conventional dynamic trick play generation is that the view files reference only a sub-set of the I-frames present in the source MPEG content. That makes disk I/O very inefficient, especially on systems based on RAID volumes when one of the data disks is offline. For example, if I-frames occur every 0.5 second on a 4 Mbps stream, then a full stripe read of a 5+1 RAID array with a 512kb block size will yield only about 10 I-frames. Only a fraction of those are actually useful when constructing trick play view files with greater than 1X playback rates. For example, if I-frames are on average 50kb and the desired trick play speed uses only 5 I-frames from a RAID stripe, the effectiveness of the data read is only (5∗50kb)/(5∗512kb), which is less than 10%.
[0003] Under normal conditions (e.g. where no RAID reconstruction is required) it is not necessary to read the full stripe in order to obtain the desired I-frames. In the best case, a full disk block read is required, while in the worst case may involve reading two disk blocks when an I-frame spans blocks.
[0004] Another limitation of conventional dynamic trick play generation is that the source MPEG content usually includes several independent media streams. Trick play view streams need to be fully compliant MPEG bitstreams, but simple cut-and-past operations on I-frames could produce non-contiguous bitstreams. A solution used in the past was the insertion of transport stream discontinuity indicators between each pair of I-frames, however some set top boxes do not handle discontinuities correctly. Another approach used in the past was to perform filtering in real time so that the unwanted media streams could be excluded. That adds significant overhead to the real time processor, because the unwanted packets have to be located, and the I-frame fragments need to be reassembled.
[0005] The limitations above motivated the development of multi-asset trick play mechanisms where all allowable trick play speeds were pre-generated as part of the content ingest mechanism. Some drawbacks of multi-asset trick play mechanisms are the lack of flexibility (can only use the pre-generated trick play speeds) and the need for extra storage space for all trick play files generated. Also, in the network DVR scenario with real time playback requirements, efficient disk I/O and latency from live feed are conflicting objectives. The network DVR process must record not only the main view data, but also all the required trick play view files. Because trick play view data is generated more slowly, the network DVR process must write partial blocks/stripes in order to ensure availability of live data, which increases the disk I/O bandwidth utilization and imposes extra processing load on the system.
[0006] US-A-6 112 226 discloses a method for concurrently encoding and tagging digital information for allowing non-sequential access during playback. In particular, a digital data stream is generated with an encoder, which also concurrently generates tag data that indicates locations of the video frame data within the digital data stream. When non-sequential access is requested by a client, a selected set of video frames within the digital data stream is selected based on the tag data, and a second digital data stream including the selected video frame data is constructed and transmitted to the client.
[0007] US-B1-6 327 421 discloses a multiple speed fast forward/rewind compressed video delivery system, wherein a single ancillary data stream is used for fast-forward play and rewind at multiple speed. In particular, a sub-sequence of the original video sequence, consisting of every n-th picture, is compressed as I-picture to generate the ancillary stream. A client request for fast-forward play is then responded to, by transmitting a subset of I-pictures from the ancillary stream.
[0008] US-A-5 864 682 discloses a method for frame accurate access of digital audio-visual information for digital video delivery operations. A digital representation of an audio-visual work, such as an MPEG file, is parsed to produce a tag file, which includes information about each of the frames in the audio-visual work. Fast and slow forward and rewind operations are performed by selecting video frames in the audio-visual work based on the information contained in the tag file and the desired presentation rate, and generating a data stream containing data representing the selected video frames.

[0009] In the drawings, the same reference numbers and acronyms identify elements or acts with the same or similar functionality for ease of understanding and convenience. To easily identify the discussion of any particular clement or act, the most significant digit or digits in a reference number refer to the figure number in which that element is first introduced.

Figure 1 is a block diagram of an embodiment of files involved in rendering trickplay.

Figure 2 is a flow chart illustrating an embodiment of a trickplay process.

Figure 3 is a block diagram of an embodiment of a tag file format.

1. A method characterized by comprising:

generating dynamically, as the original media content is being streamed and as a result of receiving said viewer requests, trickplay view files from said single trickplay source file, 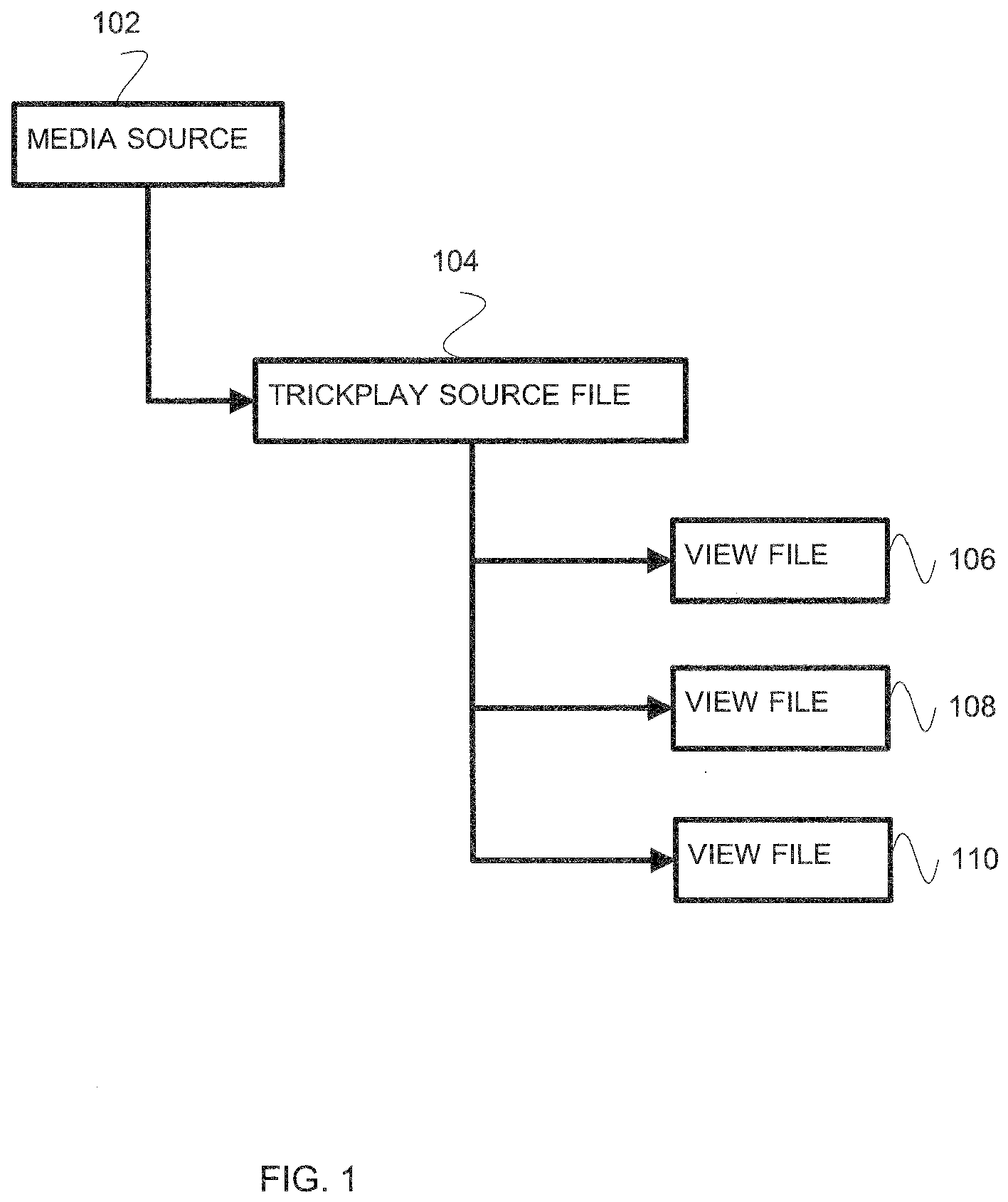 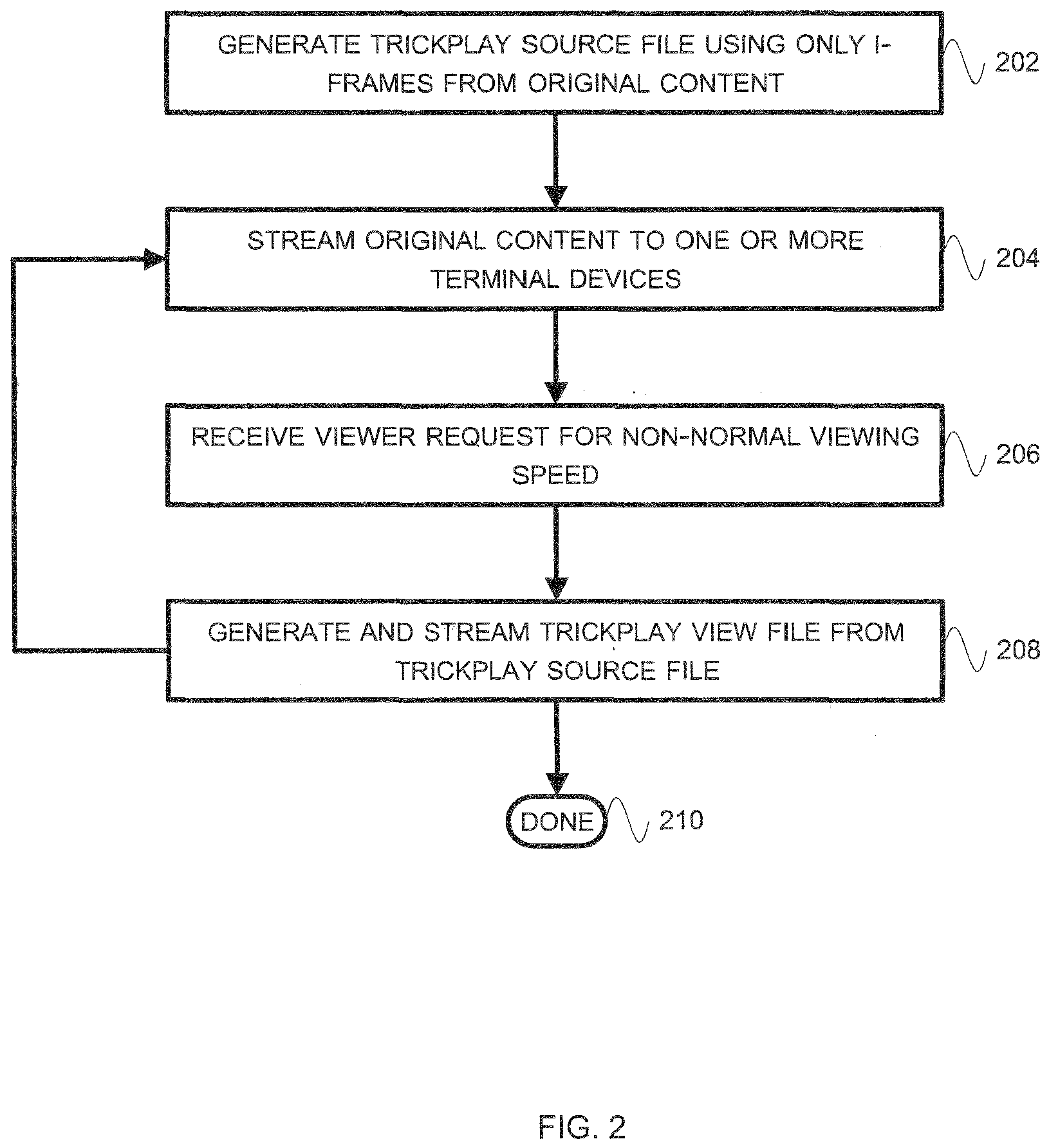 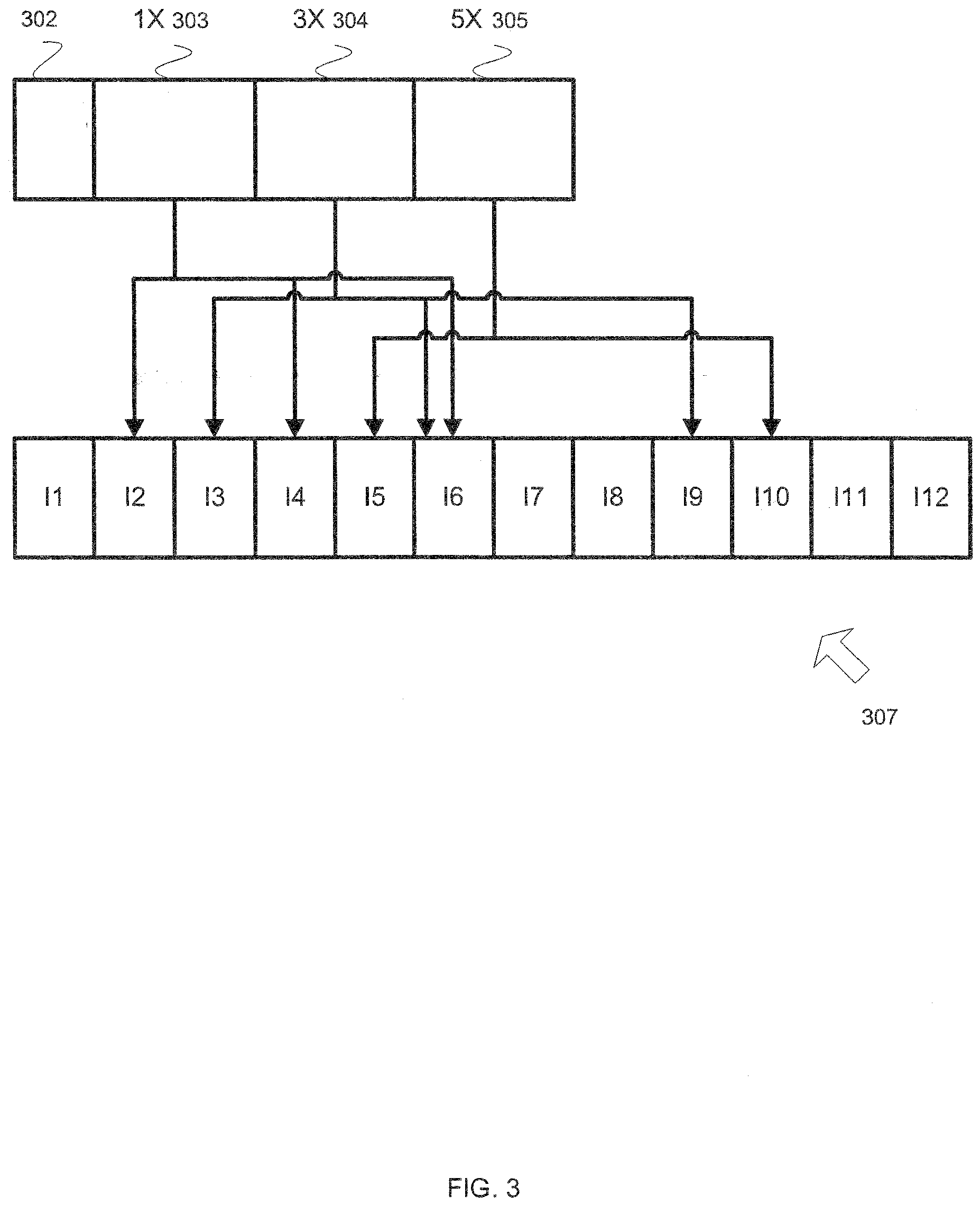