[0001] Technological advances in computer hardware, software, and networking have lead to efficient, cost effective computing systems (e.g., desktop computers, laptops, handhelds, cell phones, servers...) that can communicate with each other from essentially anywhere in the world. Such systems continue to evolve into more reliable, robust and user-friendly systems. As a consequence, more and more industries and consumers are purchasing computers and utilizing them as viable electronic alternatives to traditional paper and verbal media for exchanging information. Many industries and consumers are leveraging computing technology to improve efficiency and decrease cost. For instance, consumers can scan and store documents, create an album of digital images with text overlays, search and retrieve specific information (e.g., web pages with various types of data), upload pictures from digital cameras, view financial statements, transmit and/or receive digital facsimiles, exchange correspondence (e.g., email, chat rooms, voice over IP...), etc.
[0002] As a result, such computing systems and/or devices have incorporated a variety of techniques and/or methods for inputting information. Computing systems and/or devices facilitate entering information utilizing devices such as, but not limited to, keyboards, keypads, touch pads, touch-screens, speakers, stylus' (e.g., wands), writing pads, ... However, input devices that leverage user handwriting bring forth user personalization deficiencies in which each user can not utilize the data entry technique (e.g., writing) similarly.
[0003] A user's handwriting can be as unique as the user, wherein such uniqueness can be used for identification purposes. Commercial handwriting recognition systems implemented within various computing systems and/or devices attempt to reduce the impact of writer variation through utilizing large training datasets including data from a plurality of disparate users. Even when handwriting samples from as many as 1500 users are available, there is sufficient variation in the handwriting to uniquely identify each of the users.
[0004] From a machine learning perspective, such variation makes handwriting recognition difficult for computers. While intra-user characters (e.g., from the same user) have small variations, inter-user characters (e.g., from different users) have large variations and contribute to recognition errors. As a result, learning from training data obtained from one set of users (even hundreds of users) does not necessarily produce models that generalize well to unseen handwriting styles. The computer recognition experience using a generic (e.g., writer-independent) recognizer can be especially poor for users with rare writing styles. One explanation for the poor performance can be that the trained generic recognizer is incomplete as it has not learned to recognize unseen user's writing style(s).
[0005] A pragmatic approach to improving recognizer performance on unseen writing styles is writer adaptation (or personalization). Personalization enables the recognizer to adapt to a particular user's handwriting by collecting and learning from additional data samples from the user. Clearly, there is a trade off between the number of training samples needed from the user, the achieved reduction in error rate, and the perceived inconvenience to the user. The larger the amount of training data, the better the personalized recognizer, but the more inconvenience for the user based on input of samples, and/or training utilizing such samples.
[0006] US 2005/018906 A1 relates to a method of modifying a classification scheme for classifying hand-written characters to thereby make the classification scheme user dependent. The classification scheme includes a number of allographs, each allograph representing a respective style of a respective letter. The method includes obtaining at least one hand-written character, and then selecting an allograph representing the character. One or more of the allographs are then modified in accordance with the selection, to thereby reflect the fact that the allograph corresponds to a style of letter used by the user.
[0007] N. Matić et al: "Writer-adaptation for on-line handwritten character recognition", Document Analysis and Recognition, 1993, Proceedings of the Second International Conference on Tsukuba Science City, Japan 20 to 22 Oct. 1993, Los Alamitos, CA, USA, IEEE Comput. SOC, 20 October 1993, pages 187 to 191 relates to a writer-adaptable character recognition system designed for on-line characters entered on a touch terminal. It is based on a Time Delay Neural Network (TDNN) that is pre-trained on examples for many writers to recognize digits and uppercase letters. The TDNN without its last layer serves as a preprocessor for an Optimal Hyperplane classifier that can be easily retrained to peculiar writing styles. This combination allows for fast writer-dependent learning of new letters and symbols. The system is memory and speed efficient.
[0008] J-H Chiang: "A hybrid neural network model in handwritten word recognition", Neural Networks, Elsevier Science Publishers, Barking, GB, vol. 11, no. 2, 1 March 1998 relates to a hybrid neural network model in handwritten word recognition. The word recognition system requires a module that assigns character class confidence values to segments of images of handwritten words. The module must accurately represent ambiguities between character classes and assign low confidence values to a wide variety of non-character segments resulting from erroneous segmentation. The proposed hybrid neural model is a cascaded system. The first stage is a self-organizing feature map algorithm (SOFM). The second stage maps distances into allograph membership values using a gradient descent learning algorithm. The third stage is a multi-layer feedforward network (MLFN).

Fig. 1 illustrates a block diagram of an exemplary system that facilitates recognizing a character associated with handwriting utilizing an allograph trained classifier.

Fig. 3 illustrates a block diagram of binary tree that facilitates visualizing results associated with clustering for a character.

Fig. 4 illustrates a block diagram of tables associated with various handwriting styles that can be utilized in accordance with the claimed subject matter.

Fig. 5 illustrates a block diagram of an exemplary system that facilitates utilizing an allograph classifier and a base classifier.

Fig. 6 illustrates a block diagram of an exemplary system that facilitates employing a personalizer support vector machine in accordance with the subject innovation.

Fig. 7 illustrates a block diagram of an exemplary system that facilitates implementing an unpersonalized recognizer employing a linear combiner.

Fig. 9 illustrates graphed results in accordance with the subject innovation.

Fig. 10 illustrates a block diagram of an exemplary system that facilitates recognizing a character associated with handwriting utilizing an allograph trained classifier.

Fig. 11 illustrates an exemplary methodology for training at least one classifier with allograph data to provide handwriting recognition.

Fig. 13 illustrates an exemplary networking environment, wherein the novel aspects of the claimed subject matter can be employed.

Fig. 14 illustrates an exemplary operating environment that can be employed in accordance with the claimed subject matter.

X. The clustering C is computed independently for every letter and/or symbol. An hierarchical clustering algorithm produces an hierarchy of nested clusters [C1, C2, ..., CM] such that Cm-1 is a subset of Cm. This hierarchy can be built in M steps, where a clustering at step m can be produced from the clustering produced at step m-1. At step 1, every member and/or a portion of the member in the sample set X can represent a cluster of its own. Using a dissimilarity function D(ck,ck') of two clusters, the following algorithm can be applied by the allograph component 204: a) Initialize C1 = {{x1},{x2},...,{xM}}, where each sample is a cluster by itself; and b) For m = 2, ...., M: obtain the new clustering Cm by merging the two most similar clusters ckmin and ck'min of Cm-1. The closest clusters can be defined by (kmin, k'min) = arg min(k, k'),k≠k'D(ck,ck').
[0032] The cluster dissimilarity function D(ck,ck') can be defined in terms of the ink sample dissimilarity function D(xk,xk'). Each ink sample can be first isotropically normalized and centered within a fixed size rectangle. For ink samples k (including, for instance, S strokes), and k' (including, for instance, S' strokes),

where P and P' are the corresponding re-sampled coordinate vectors of samples k, k' and N is the number of sampling points. An element p in the vector P has 3 coordinates (x, y, θ) where x, y are the Cartesian coordinates of the point p and θ is the estimate of the slope at the same point.
[0033] With this definition, ink samples with different stroke counts may not be merged in the same cluster until the very end. At that point the merging would have actually stopped.

[0034] It is to be appreciated that utilizing the maximum rather than average or the minimum to define the distance between two ink samples with a different number of strokes to ∞ favors compact clusters.
[0035] For visualization purposes, an ink sample can be selected to be the cluster representative. The chosen representative for every cluster can be the median center of the cluster. The median center x-k for cluster ck can be defined as the ink sample with the smallest median distance with respect to the remaining cluster member ink samples.

an interface component (104) that receives at least one handwritten character; and

an allograph neural network classifier (708) trained using allograph data including a plurality of distinct handwriting styles for each character to map character feature vectors (504) obtained from the received at least one handwritten character to character allographs; and

a base neural network classifier (706) trained to directly map the character feature vectors to output classes, wherein the classes correspond to different characters,

2. The system of claim 1, further comprising an allograph component (204) that generates allograph data.

4. The system of claim 3, said allograph data generated by said clustering technique are visualized as a binary tree referred to as a dissimilarity dendogram.

7. The system of claim 6, wherein the outputs of said allograph neural network classifier are first sent to a linear combiner (506, 710) before being sent to the combine component.

10. The system of claim 1, wherein said allograph data is based at least in part upon at least one of the following: a geographic region, a school district, a language, and a style of writing.

obtaining a feature vector from the received handwritten character; 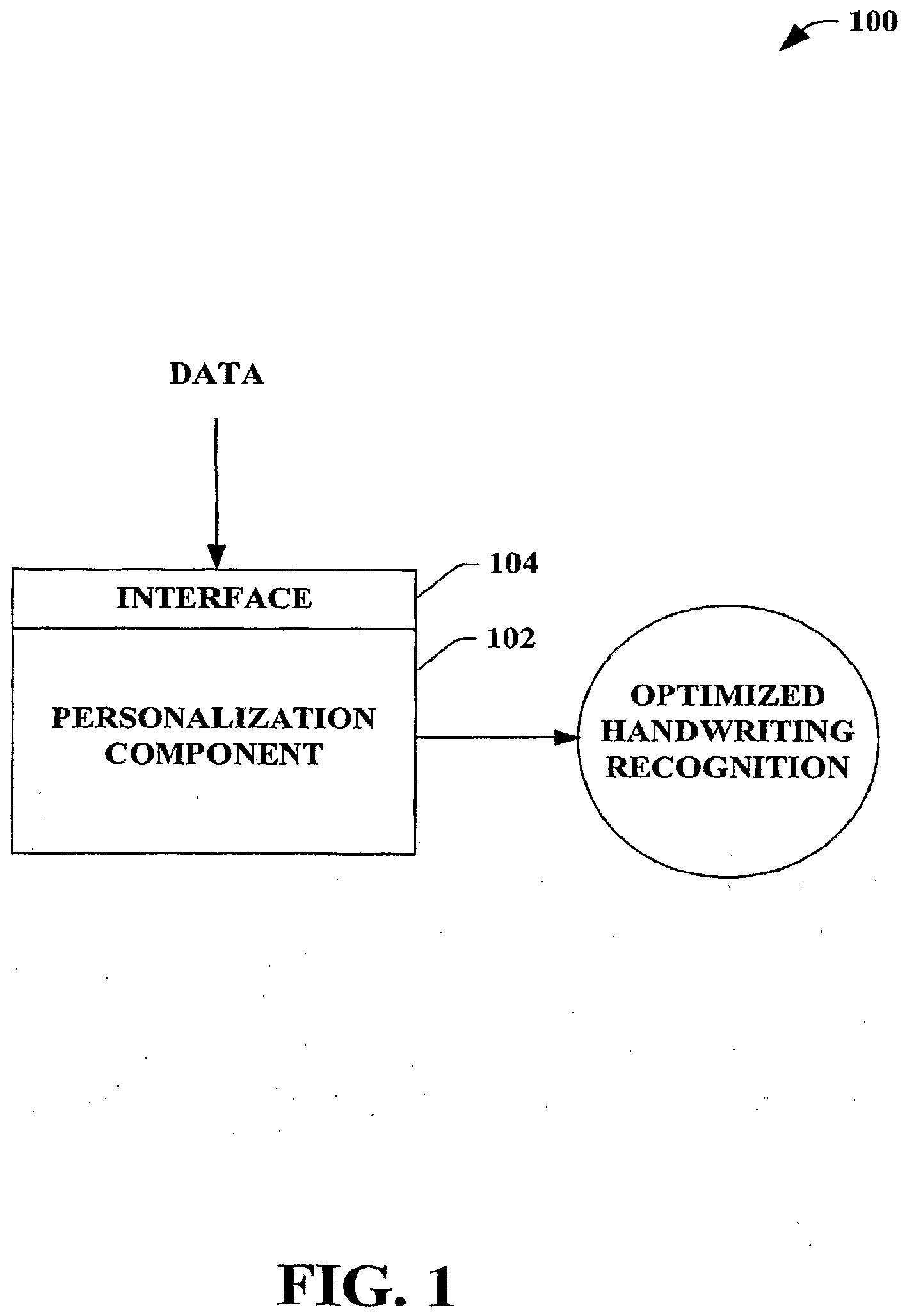 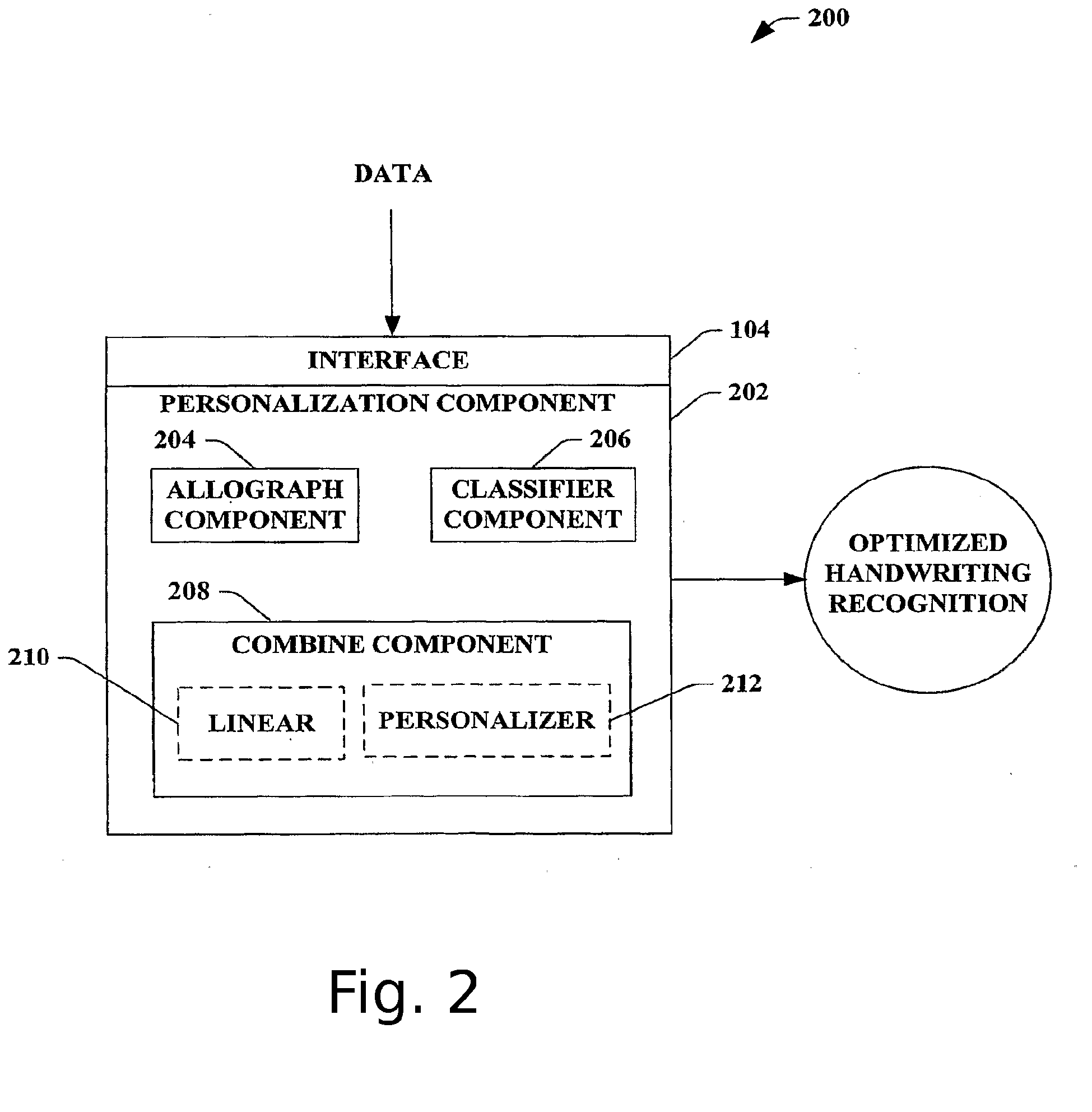 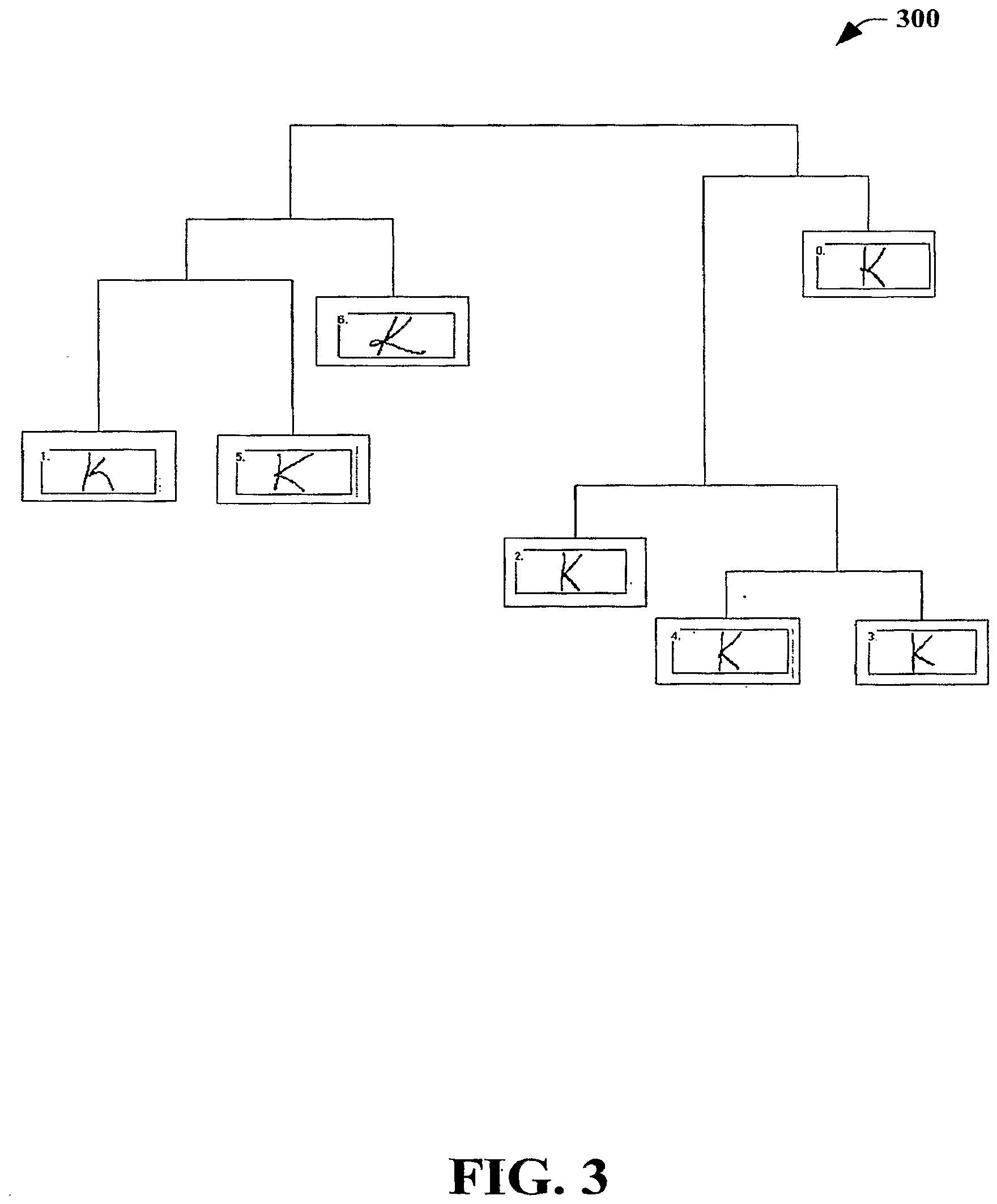 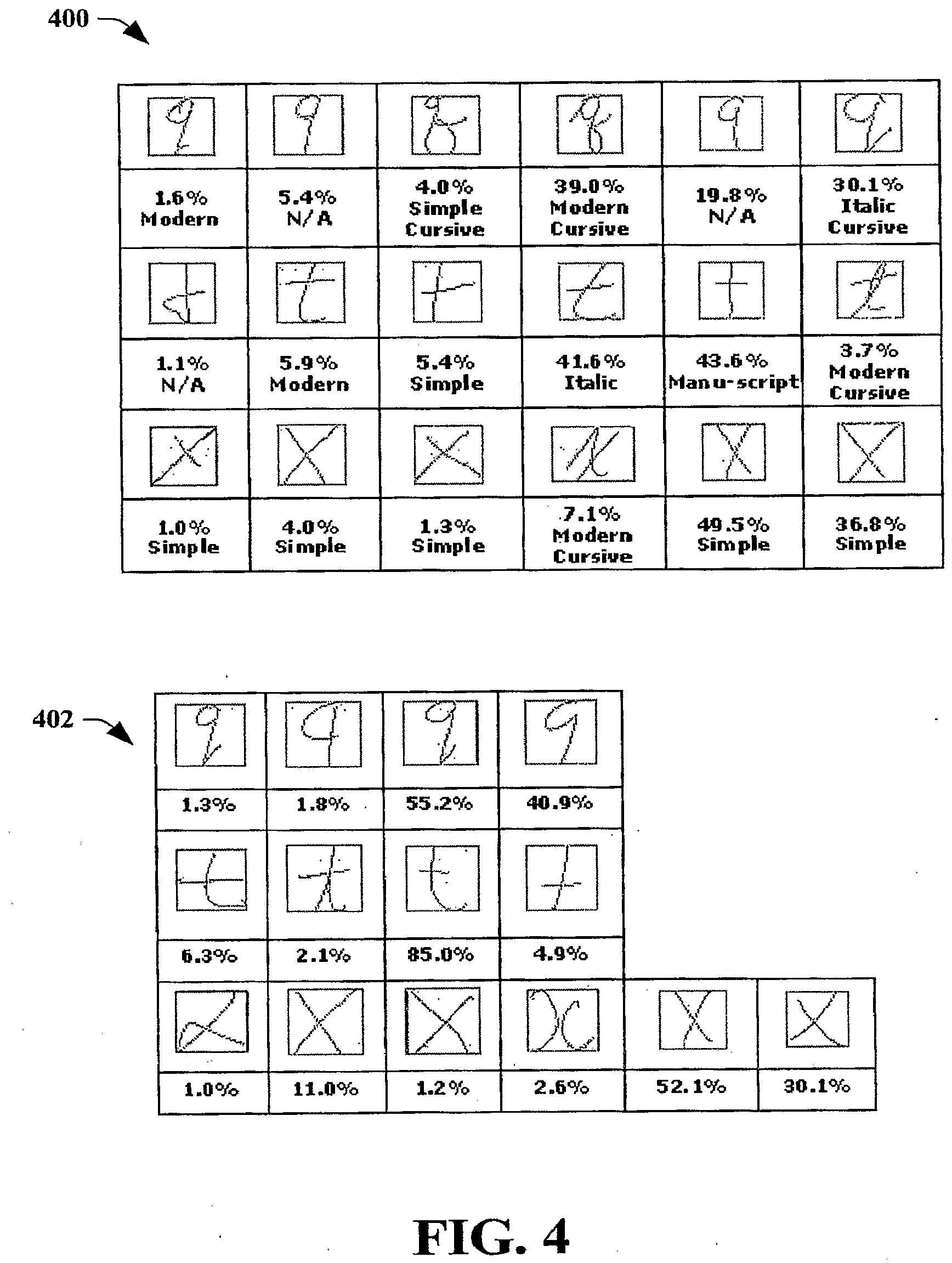 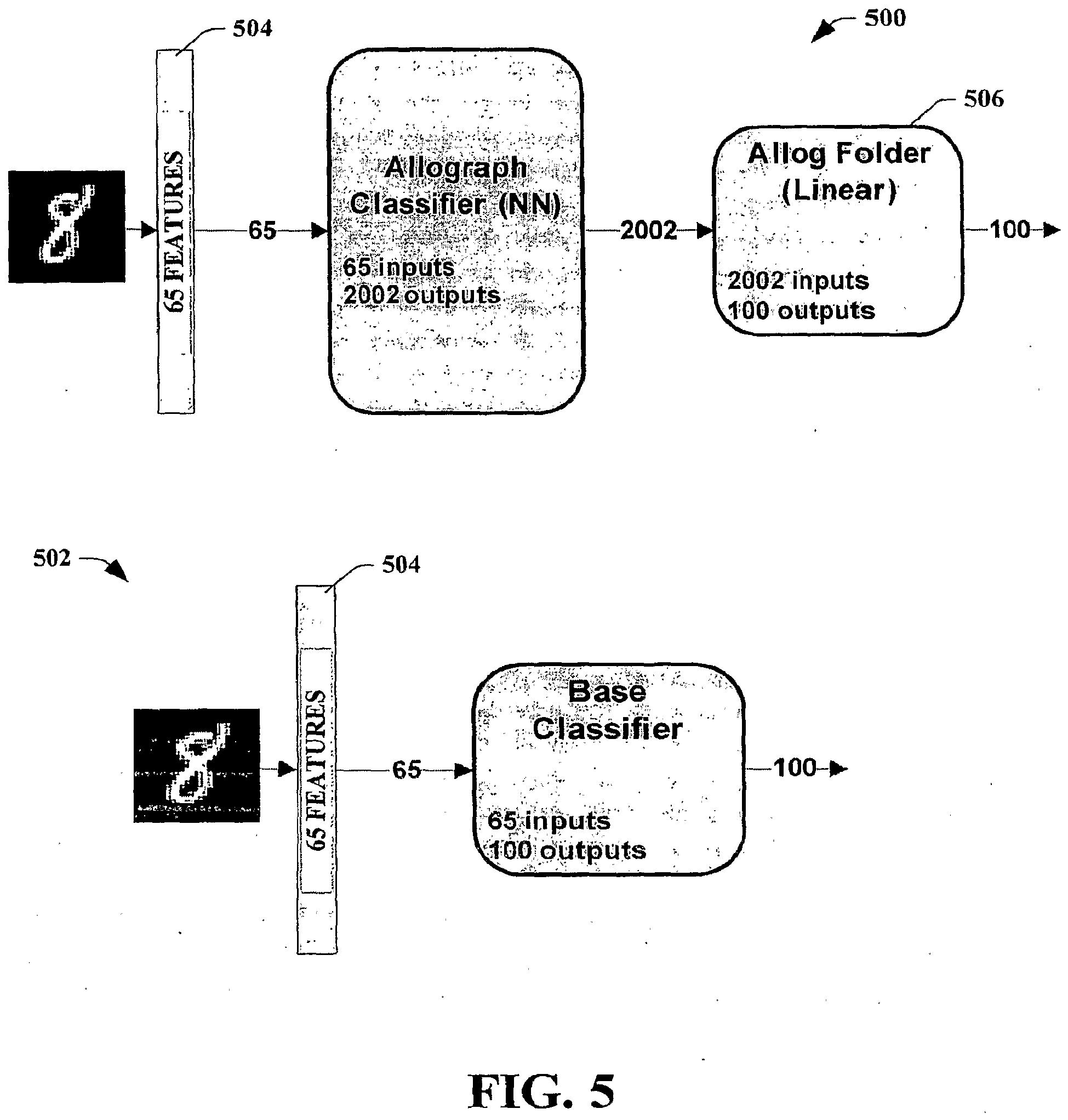 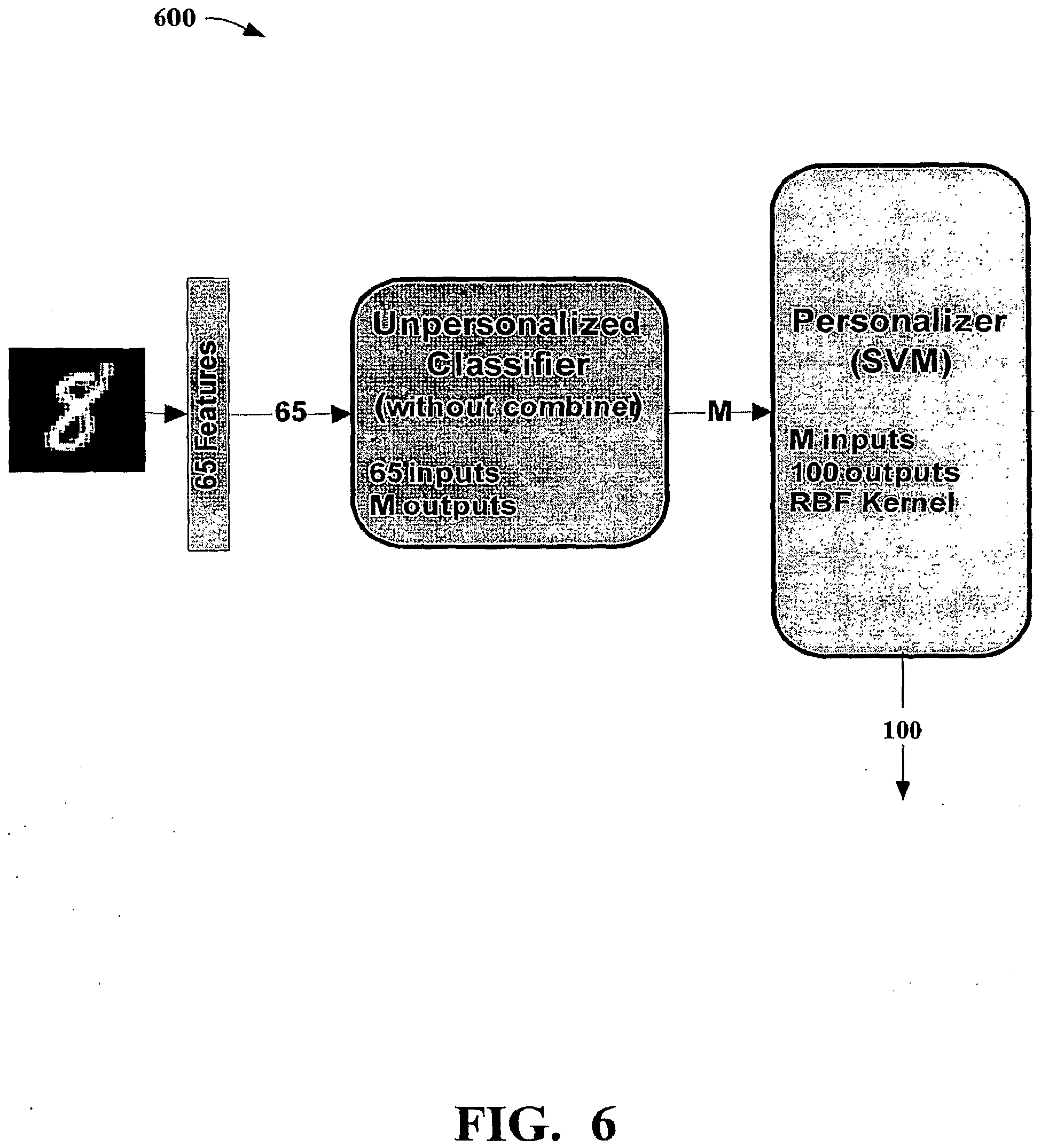 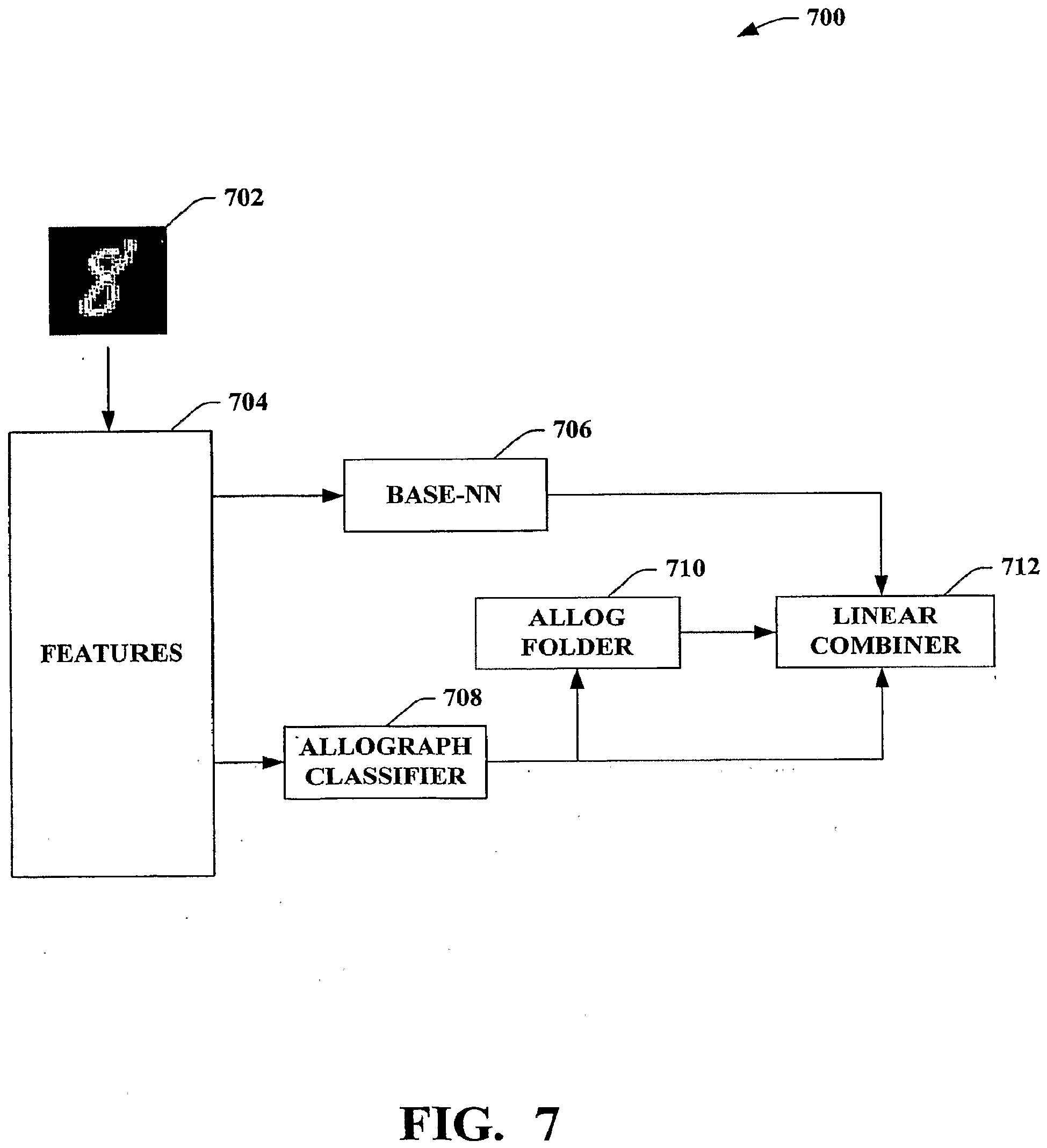 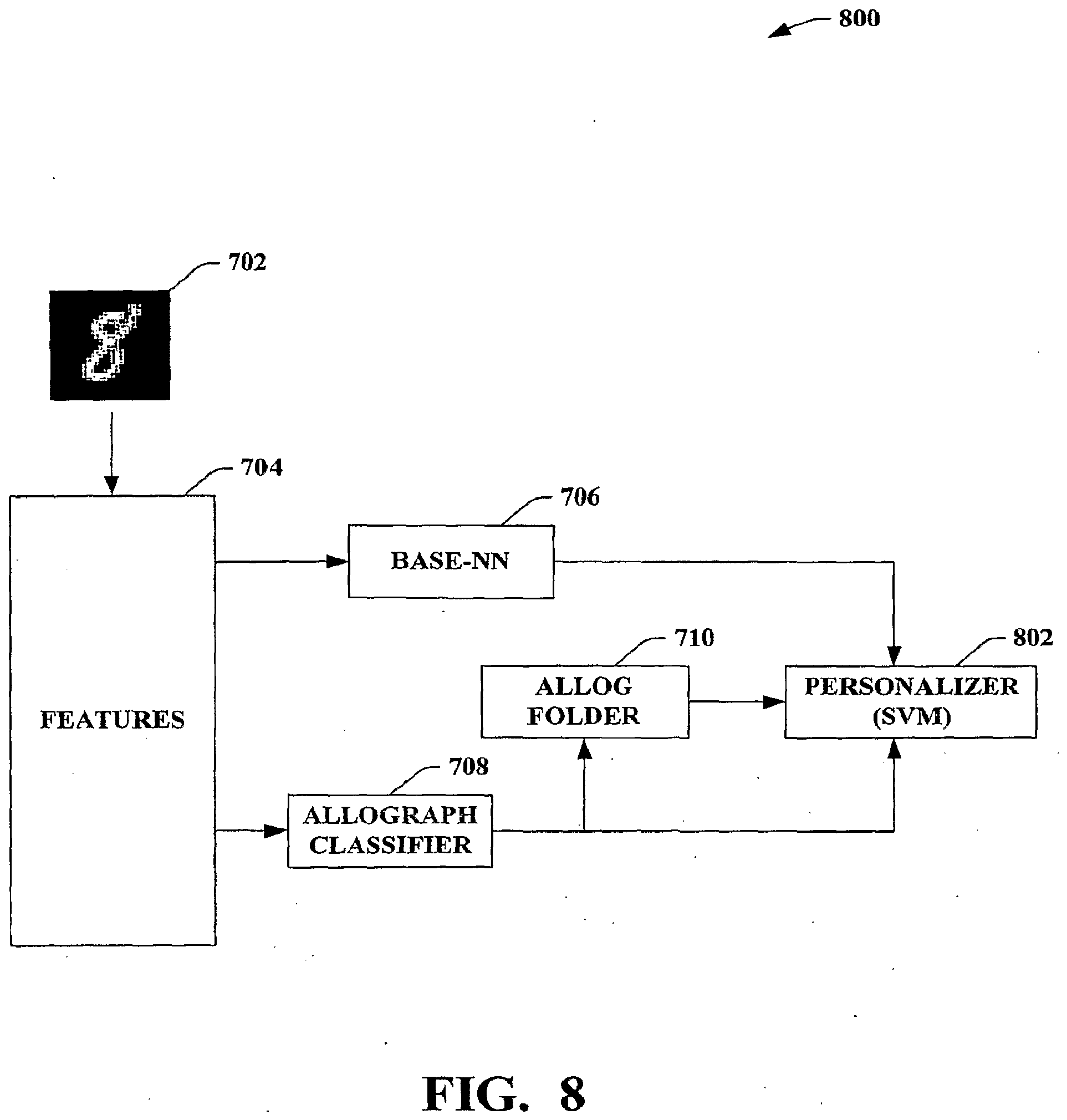 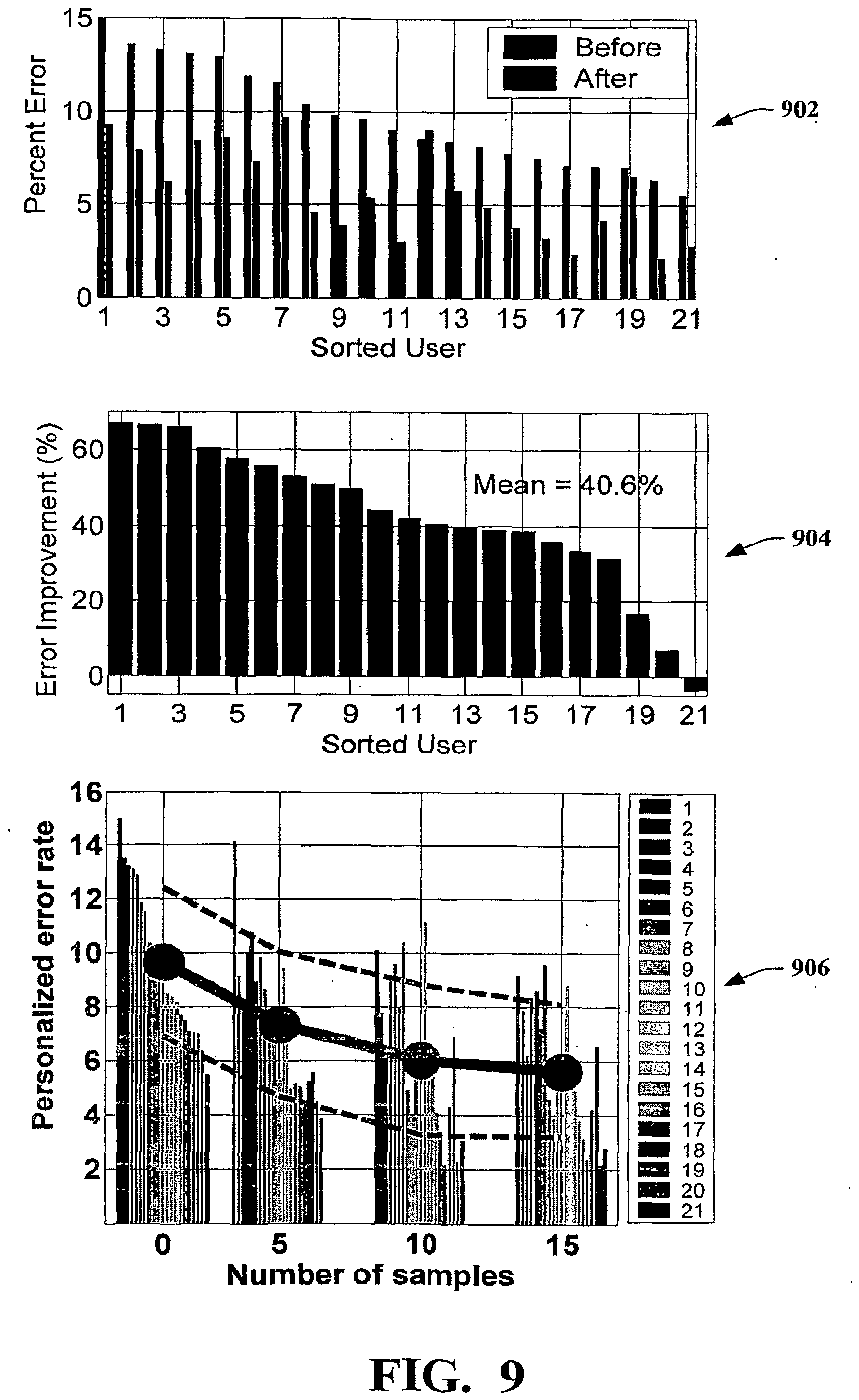 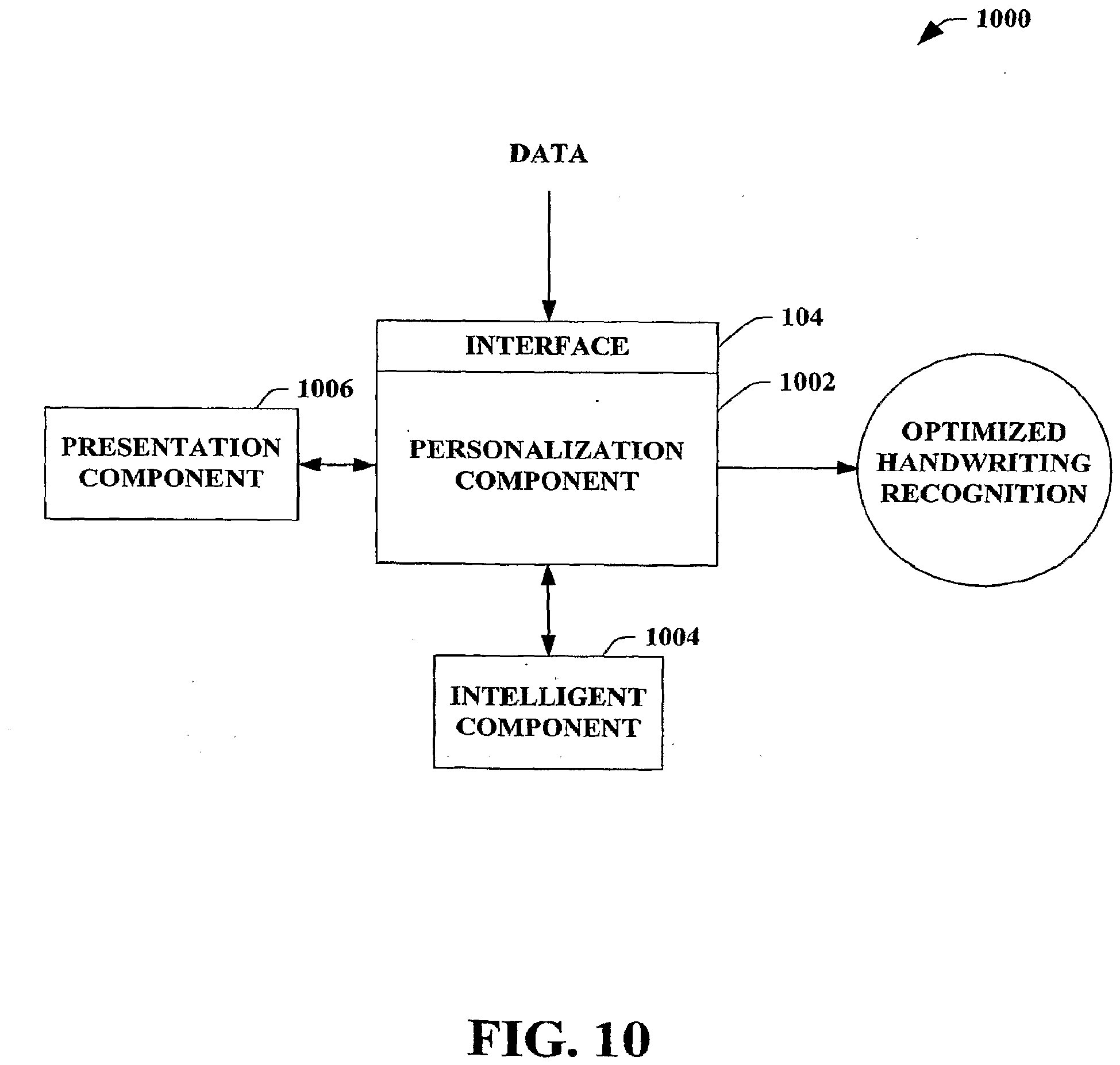 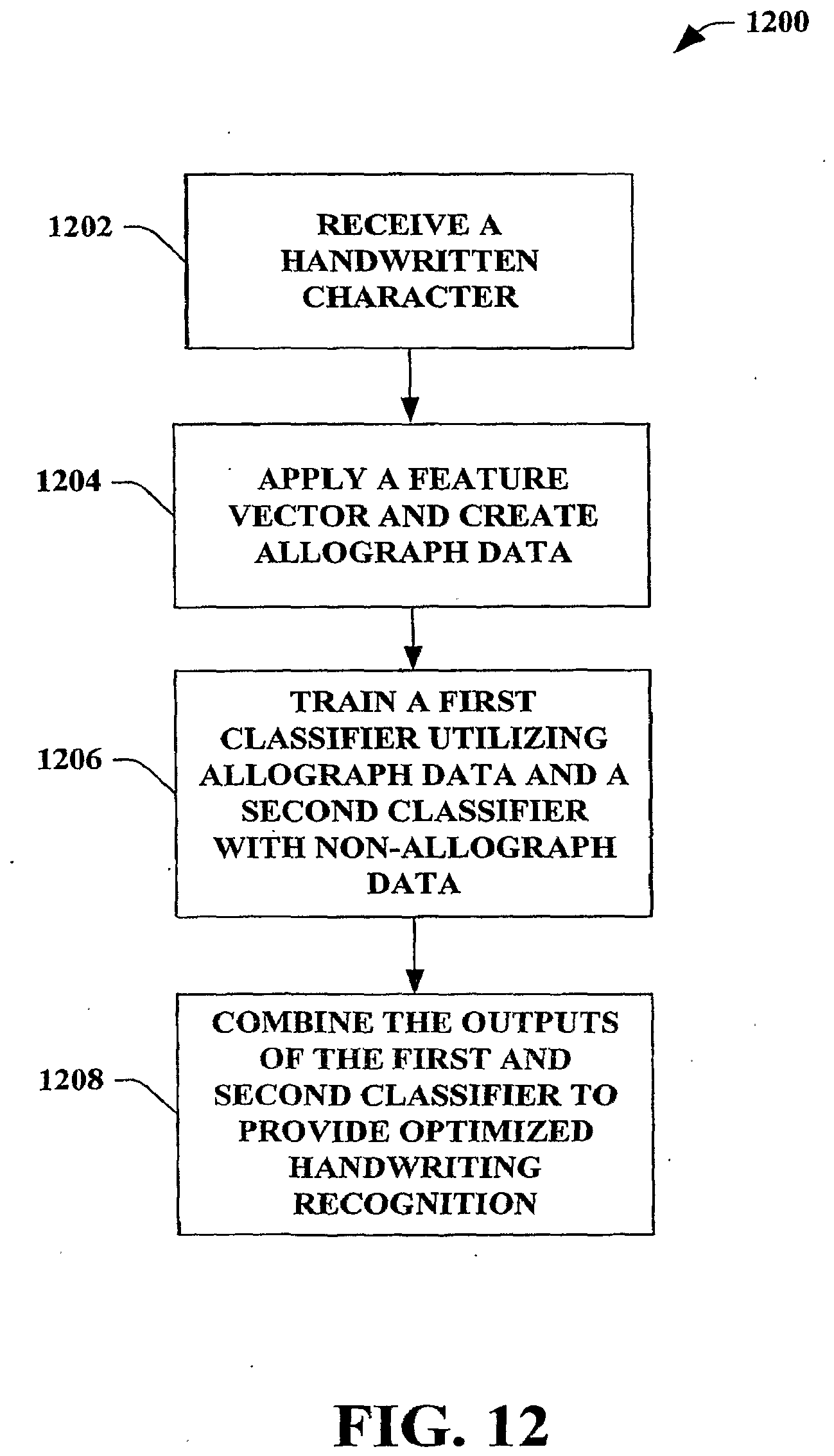 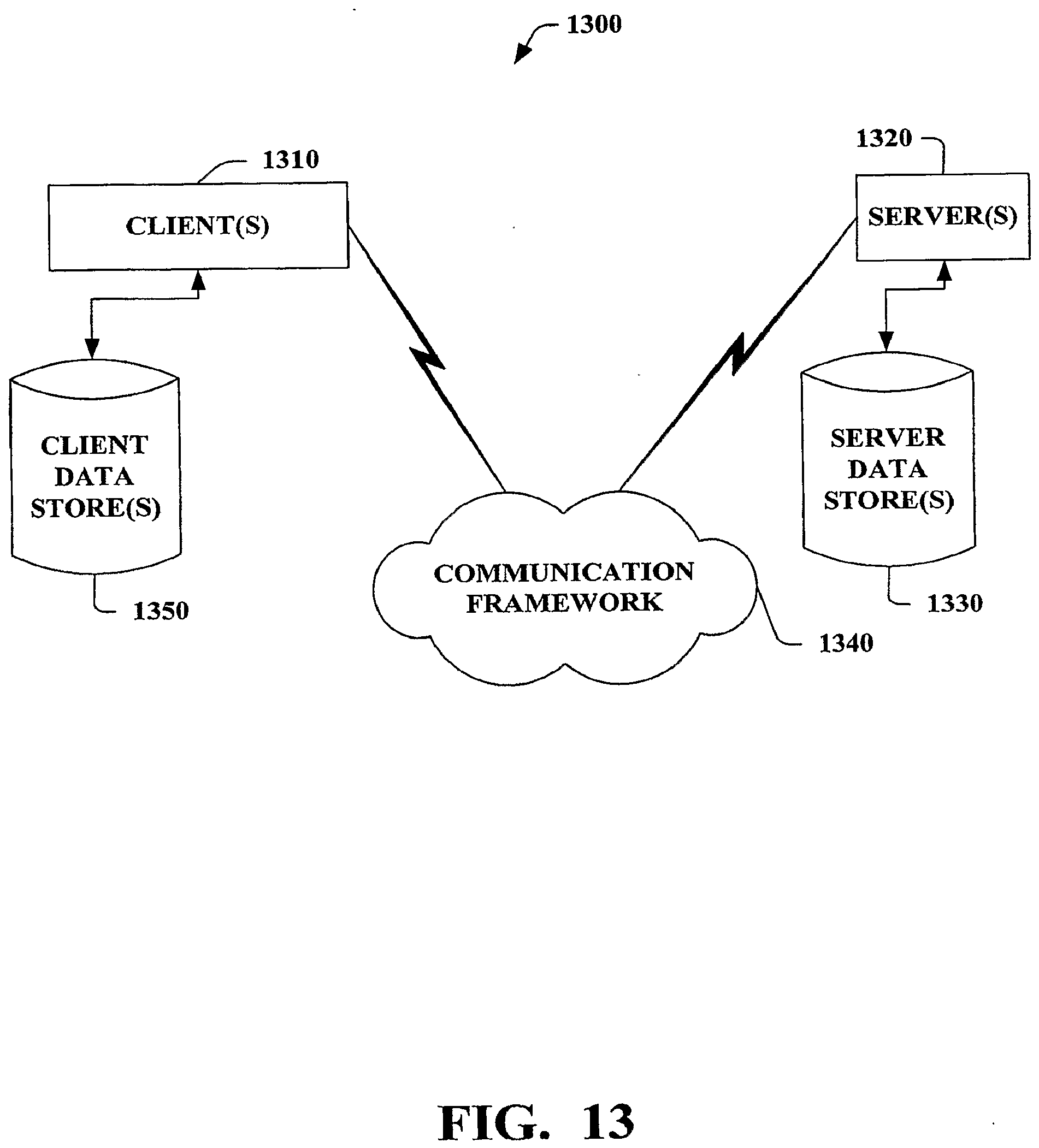 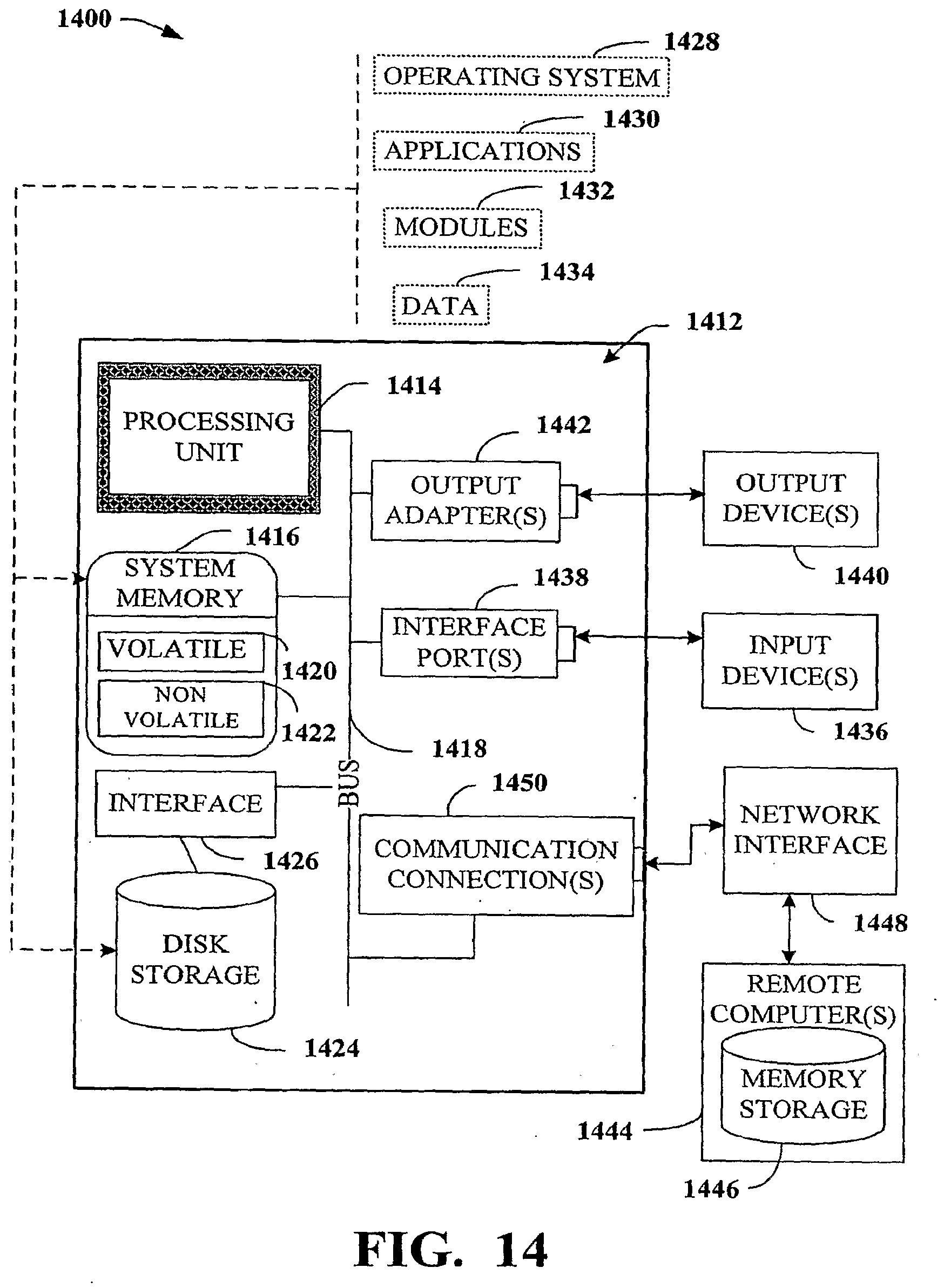