[0001] The present invention relates to a device for dispensing a liquid into a toilet bowl. Typically the liquid includes one or more active substances such as a surfactant, a colorant or a bleach. In Europe and the USA such devices are often clipped over the side of the toilet bowl so that flush water will rinse the liquid from a delivery surface into the toilet bowl. In countries such as Japan, the device may also be carried on top of the toilet cistern, for example, where water from a spout runs over the delivery plate before filling the cistern. Examples of such devices can be seen in EP-A-538957, WO 00/42261, WO 01/32995 and WO 02/36895. Devices delivering two liquids or a combination of a liquid and solid are also known and described, for example, in WO 02/064898, WO 02/40791, WO 02/40792 and WO 02/40787.
[0002] As will be appreciated from a study of the documents mentioned above that, there has been considerable effort to develop a device which ensures an even dosage of liquid into the toilet bowl over time. For example, it has been found that with some arrangements the liquid in the liquid reservoir becomes diluted by the flush water, reducing the viscosity of the liquid until it flows too rapidly from the reservoir, giving the user an impression of a sudden loss of liquid.
[0003] In WO 00/42261 we disclose a system in which the outflow of liquid from the reservoir, which is an upturned bottle, is controlled by two closely spaced plates with capillary channels feeding the liquid onto a delivery plate which is exposed to the flush water. In WO 01/32995 we use a construction providing a constant head of liquid in a reservoir below the container outlet and a capillary for ducting the liquid onto the delivery surface.
[0004] Document WO2004/072390 A discloses a dispenser with a delivery surface. A container for liquid is in use upside down, with its mouth in a cup, which cup has a weir in its wall.
[0005] In one aspect, the present invention provides a liquid delivery device comprising:

a cup having a wall surrounding a mouth of the container outlet, the cup being open to the atmosphere whereby, in use, liquid flows into the cup until the mouth is covered by liquid in the cup,

the cup wall having a weir formed therein whereby, in use, liquid in the cup overflows the weir;

Figure 1 is a perspective view of a liquid delivery device forming an embodiment of the invention;

Figure 2 is a front view of a container of the embodiment of Figure 1, having two compartments;

Figure 3 is a perspective view of a delivery plate and cups of the embodiment of Figure 1;

Figure 4 is an enlarged perspective view of a cup of the delivery plate of Figure 3;

Figure 5 is a perspective view from above a holder of the embodiment of Figure 1;

Figure 6 is an underneath perspective view of the holder of Figure 5;

Figure 7 is a cross-section along the line VII-VII of Figure 1, and

Figure 8 shows a modification to the delivery plate of the embodiment of Figures 1 to 7.

a cup (35) having a wall (39) surrounding a mouth (25) of the container outlet (15), the cup being open to the atmosphere whereby, in use, liquid flows into the cup until the mouth is covered by liquid in the cup;

the cup wall (39) having a weir (45) formed therein whereby in use liquid in the cup overflows the weir; 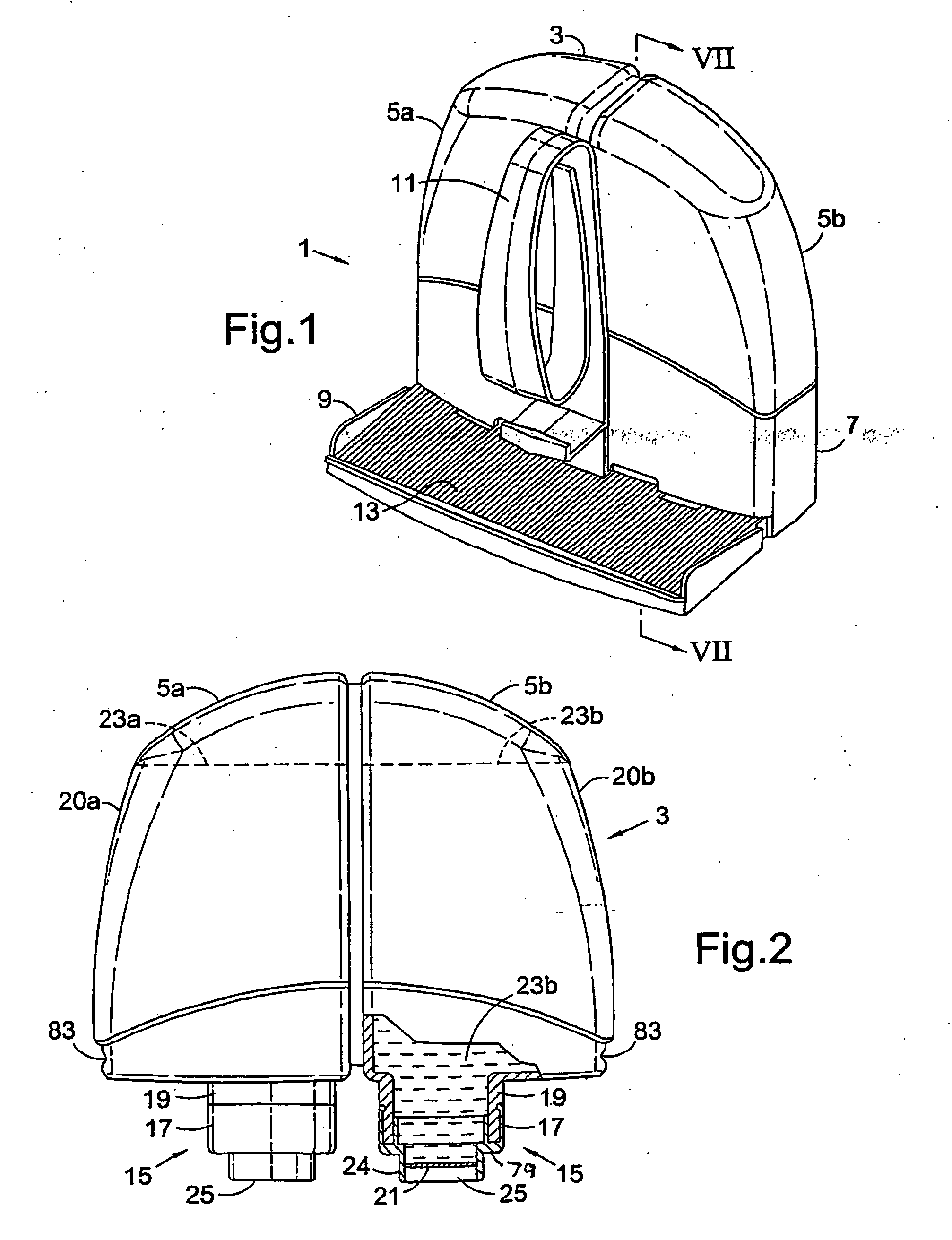 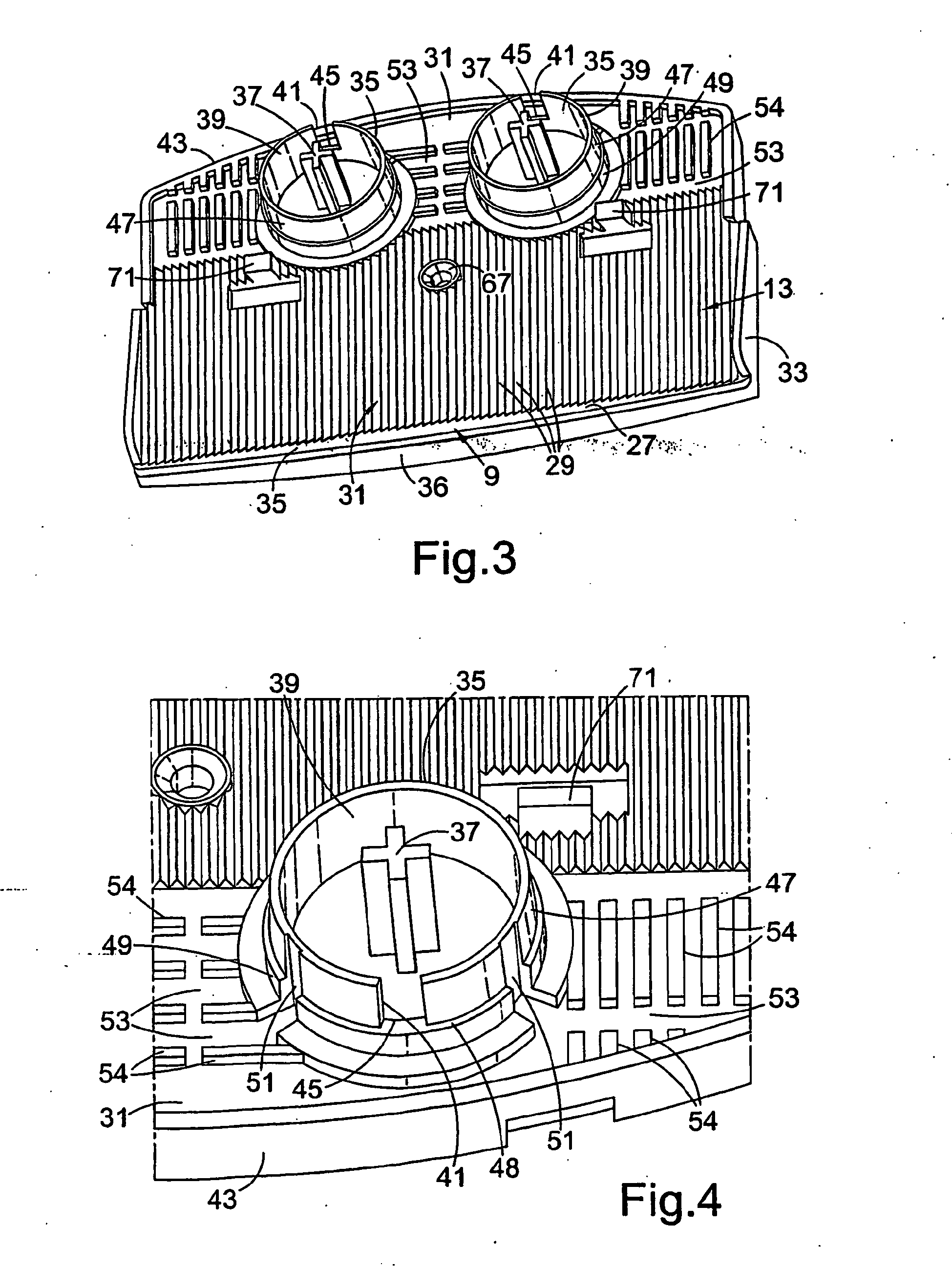 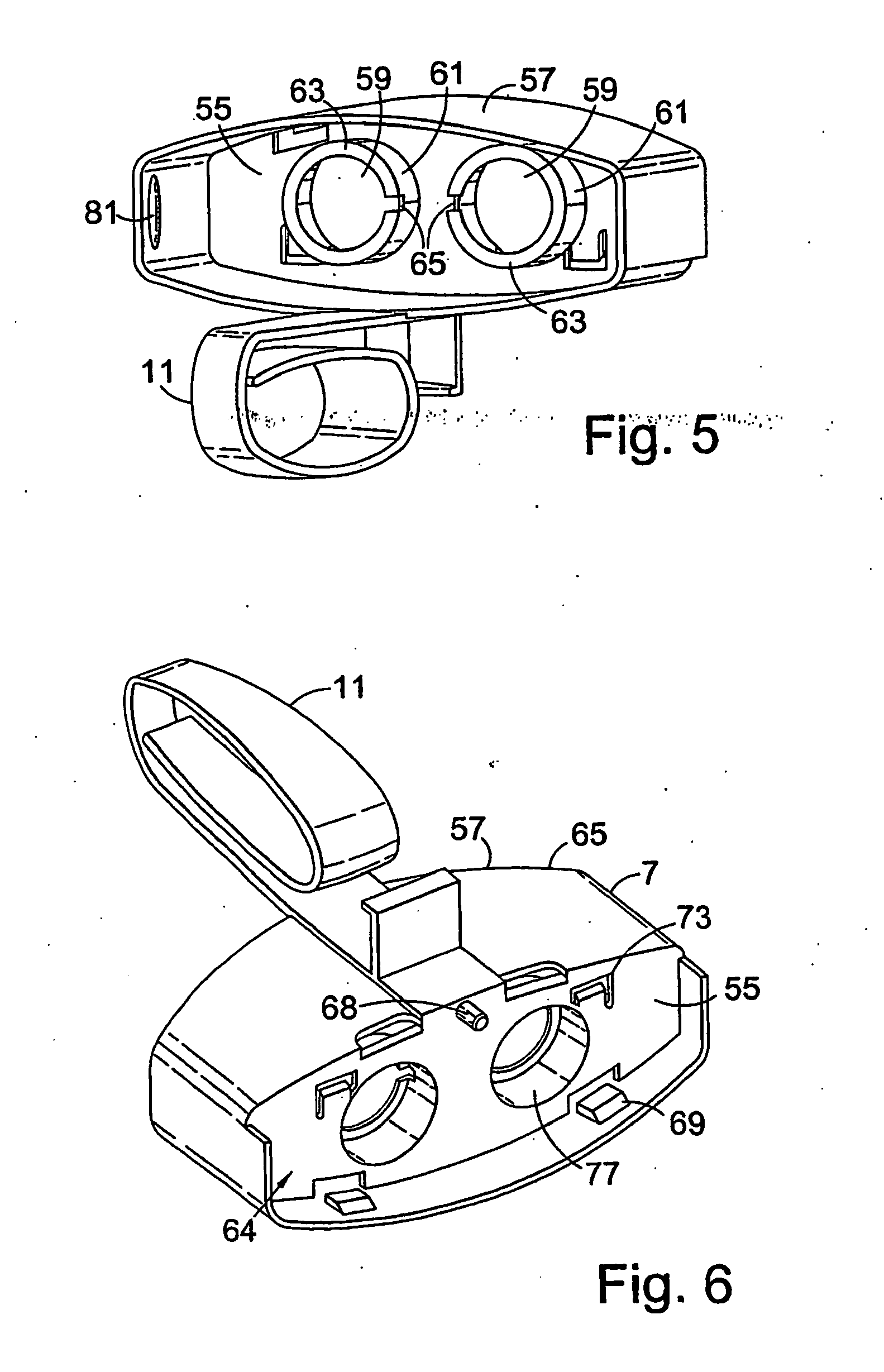 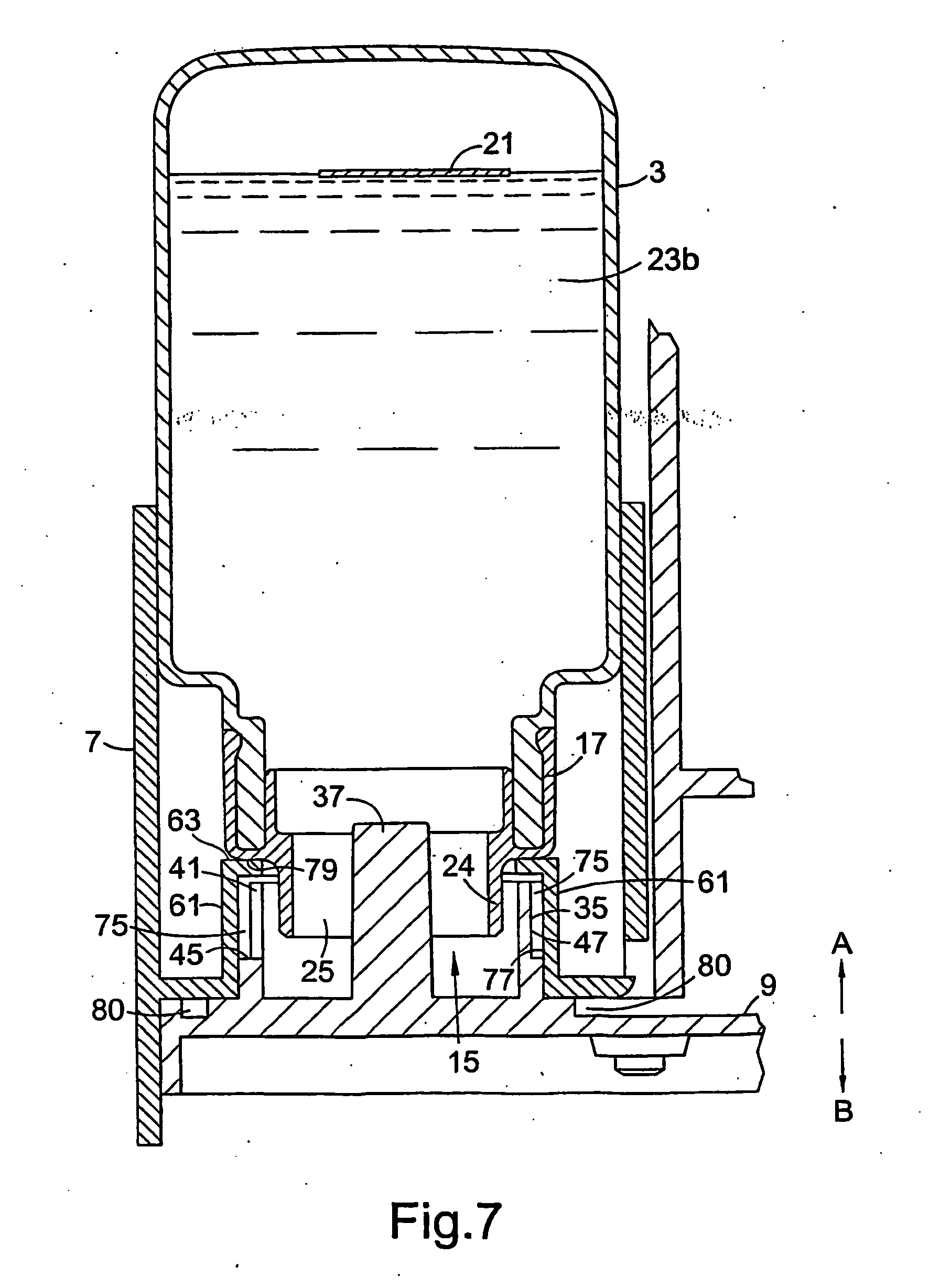 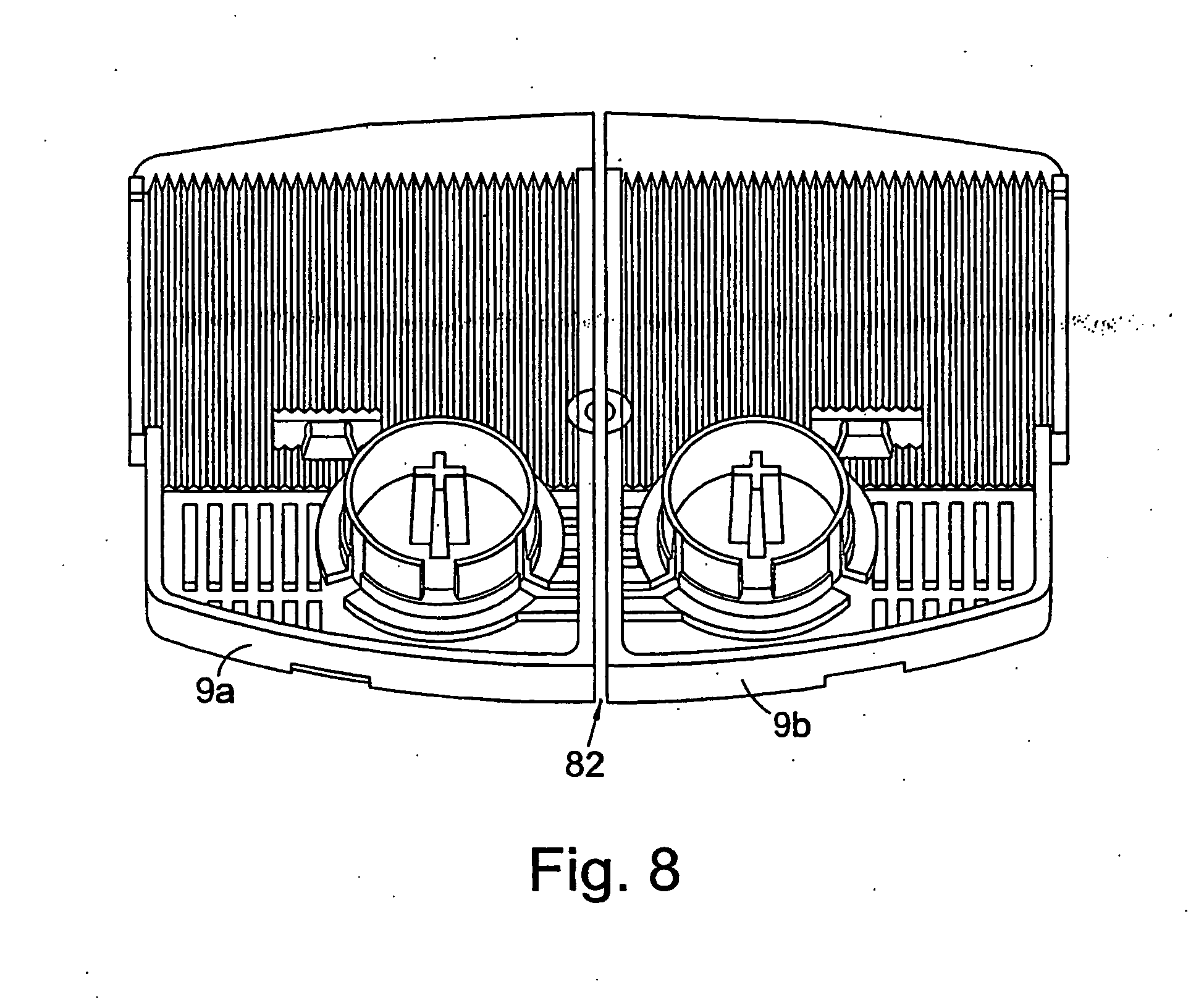