[0001] The present invention relates to the use of amphiphilic graft-type copolymers of polyaspartamide for the ophthalmic administration of drugs, such as for example steroid and non-steroid anti-inflammatory agents, antimicrobial agents such as aminoglycosides, macrolides, cephalosporin, tetracycline, quinolones, penicillin, beta-lactams, anti-glaucoma agents such as prostaglandins, prostamides, alpha- and beta-blockers, inhibitors of carbonic anhydrase, cannabinbids, antiviral agents, diagnostic agents, anti-angiogenic agents, antioxidants. At appropriate concentrations, in aqueous environments, such copolymers can form polymeric micelles capable of incorporating drugs.

STATE OF THE ART

[0015] The invention will now be clearly exemplified with reference to the appended figures, wherein:

[0016] The object of the present invention is that of creating novel ophthalmic formulations of steroidal and non-steroidal anti-inflammatory drugs, antimicrobial agents, anti-glaucoma agents, antiviral agents, anti-angiogenic agents, antioxidants, and diagnostic agents physically incorporated inside micellar systems constituted by amphiphilic polyaspartamide copolymers with the scope of increasing the quantity of bioavailable drug at the ocular level with respect to that which can be obtained by administering the free drug; this is with the aim of reducing the dose to be administered and the number of administrations, and thus obtain a therapeutic advantage. A further object of the present invention is that of providing systems which will allow less non-productive absorption of the drugs, with consequent reduction of the undesired systemic side effects which are correlated with the use of the aforementioned drugs when administered in their native states.
[0017] Another object of the present invention is that of using a family of polyaspartamide-based polymer surfactants, endowed with high compatibility, ease of reproducible manufacture at high yields and low cost, and modulability in terms of hydrophobic and hydrophilic chain content, in the production of ophthalmic formulations.

[0035] The in vivo transcorneal transport experiments have been performed on male albino rabbits (Charles River) weighing 1.8-2.5 Kg. Prior to the experiment, the animals have been kept in standard cages with free access to food and water. The rabbits have been treated in accordance with the instructions published in "Guiding Principles in the Care and Use of Animals" (DHEW Publication, NIH 80-23) and the ARCO Resolution on the Use of Animals in Research.
[0036] Two dexamethasone alcohol formulations have been used for the study:
[0037] The formulation of dexamethasone-containing PHEA-PEG5000-C16 micelles has been prepared immediately prior to testing by mixing together the appropriate quantity of copolymer and drug into a homogeneous paste using modified Ringer's solution as a dispersant and subsequently adding a suitable volume of modified Ringer's solution in order to give a final dexamethasone concentration equal to 0.1% w/v, and a polymer concentration equal to 0.2% w/v.
[0038] The tests have been conducted by administering 50 µl of one of the previously described formulations into the conjunctival sac of rabbits.
[0039] At various times within the 30 to 180 minute range, samples of aqueous humor have been removed from the animals, following euthanasia. Said samples have been added to a suitable quantity of methanol in order to precipitate-out the protein components of the aqueous humor, then following centrifugation, the supernatant has been analysed by HPLC using a 4.6/125 mm Hypersil ODS 5 µm column as the stationary phase, with a H5ODS-120CS pre-column, and a 53%/47% gradient of 0.05 M (6.8 g/l) CH3OH/KH2PO4, pH 6 as the mobile phase, at a flow rate of 1 ml/min, injection volume of 100 µl, and the eluate monitored at 242 nm.
[0040] The results of said study, reported in Figure 3, show an increase in area under the curve (AUC) of approx. 60% using the formulation of PHEA-PEG5000-C16 micelles (0.02%) containing dexamethasone alcohol (0.1%), with respect to the commercial formulation (0.1% Visumetazone suspension).

[0041] The in vitro permeability studies have been conducted using a bovine conjunctival epithelial cell (BCEC) multilayer, which reproduces the organisation of the original tissue, as a model.
[0042] Two formulations have been used for the studies with netilmycin sulphate:

✔ Formulation of netilmycin sulphate in modified Ringer's solution, with a netilmycin base concentration of 0.3% w/v;

✔ Micellar formulation (netilmycin sulphate incorporated in PHEA-PEG5000-C16 micelles in modified Ringer's solution, with a netilmycin base concentration of 0.3% w/v).

[0043] The netilmycin-containing formulation has been prepared immediately prior to testing by mixing together the appropriate quantity of copolymer and drug into a homogeneous paste using modified Ringer's solution as a dispersant and subsequently adding a suitable volume of modified Ringer's solution in order to give a final netilmycin base concentration equal to 0.3 % w/v.
[0044] The tests have been conducted by introducing 0.5 ml of one of the aforementioned formulations into the donor compartment and 1.5 ml of modified Ringers solution into the acceptor compartment; incubation lasted 120 minutes at 37 °C, with orbital shaking at 50 rpm. At subsequent times equal to 30, 60, 90 and 120 minutes, 500 µl samples have been removed from the acceptor compartment and subsequently replaced with fresh Ringer's solution. The removed samples have been analysed by HPLC, following derivatisation of the netilmycin with orthophthalaldehyde (OPA)to carry out the analytical determination. The derivatisation procedure has been conducted as reported hereinafter. To one part of the standard netilmycin solution (or solution removed from the acceptor compartment) are added three parts of OPA solution (prepared by dissolving 20 mg of OPA in 5 ml of methanol, diluting said solution in 90 ml of borate buffer pH 10.4 and adding 0.2 ml of thioglycolic acid) and one part of methanol. The solution thus obtained is kept at 60°C for 15 minutes, away from light. Each solution is then cooled rapidly by placing in an ice bath for 5 minutes and then placed in an autosampler set at 4°C prior to being analysed by HPLC. Under such conditions, the fluorescence of the netimycin-OPA derivative is stable for at least 3 hours, within which time, the sample has been analysed. HPLC analysis has been conducted using a 4.6/250 mm LUNA C18 5 µm column as stationary phase, with a H5ODS-C5 pre-column, and a 30%/70% gradient of 0.05 M (pH 7.3) CH3CN/KH2PO4 as mobile phase, at a flow rate of 1 ml/min, an injection volume of 100 µl and monitoring the eluate at 330 nm.
[0045] Each formulation has been tested ten times on a similar number of BCEC multilayer samples.
[0046] Multilayer integrity has been tested by TEER measurements at the start of each experiment, after 30 and 60 minutes, and at the end of each experiment.
[0047] Two types of statistical test have been used to determine the level of significance of the data: analysis of variance and Student t-test.
[0048] It has been shown that the coefficient of permeability of the drug vehicularised in PHEA-PEG5000-C16 micelles is equal to roughly twice that obtained with the free drug.

2. Pharmaceutical compositions according to claim 1, further comprising one or more pharmaceutically acceptable excipients for ophthalmic administration.

4. The pharmaceutical compositions according to claim 1, wherein the mean molecular weight of the polyethylene glycol chains is equal or comprised between 2000 and 10000 Da, and the number of carbon atoms in the hydrophobic chains is 12 ≤ n ≤ 18.

6. Pharmaceutical compositions according to claim 1 or 5, wherein the copolymers comprise PEG with mean molecular weight of 5000 Da and Cn hydrophobic chains wherein n is 16.

7. A pharmaceutical composition for local administration for use in the diagnosis of ophthalmic diseases comprising a diagnostic agent, said diagnostic agent being included in a pharmaceutical vector constituted by polymer micelles comprising "graft" type copolymers of polyaspartamide (PHEA) containing hydrophilic polyethylene glycol (PEG) chains with a mean molecular weight comprised between 750 and 20000 Da and/or hydrophobic Cn alkyl chains, wherein 4 ≤ n ≤ 20. 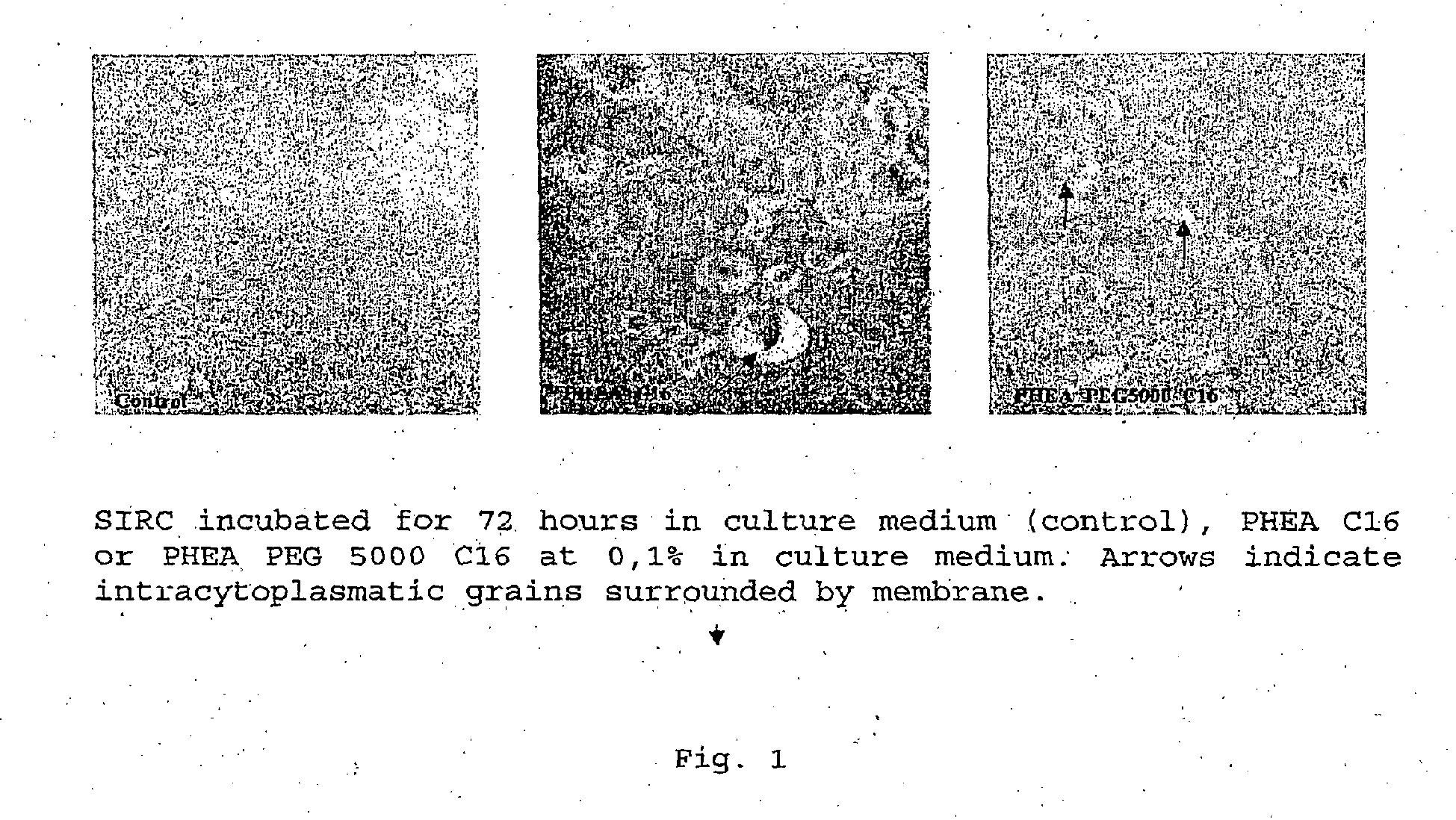 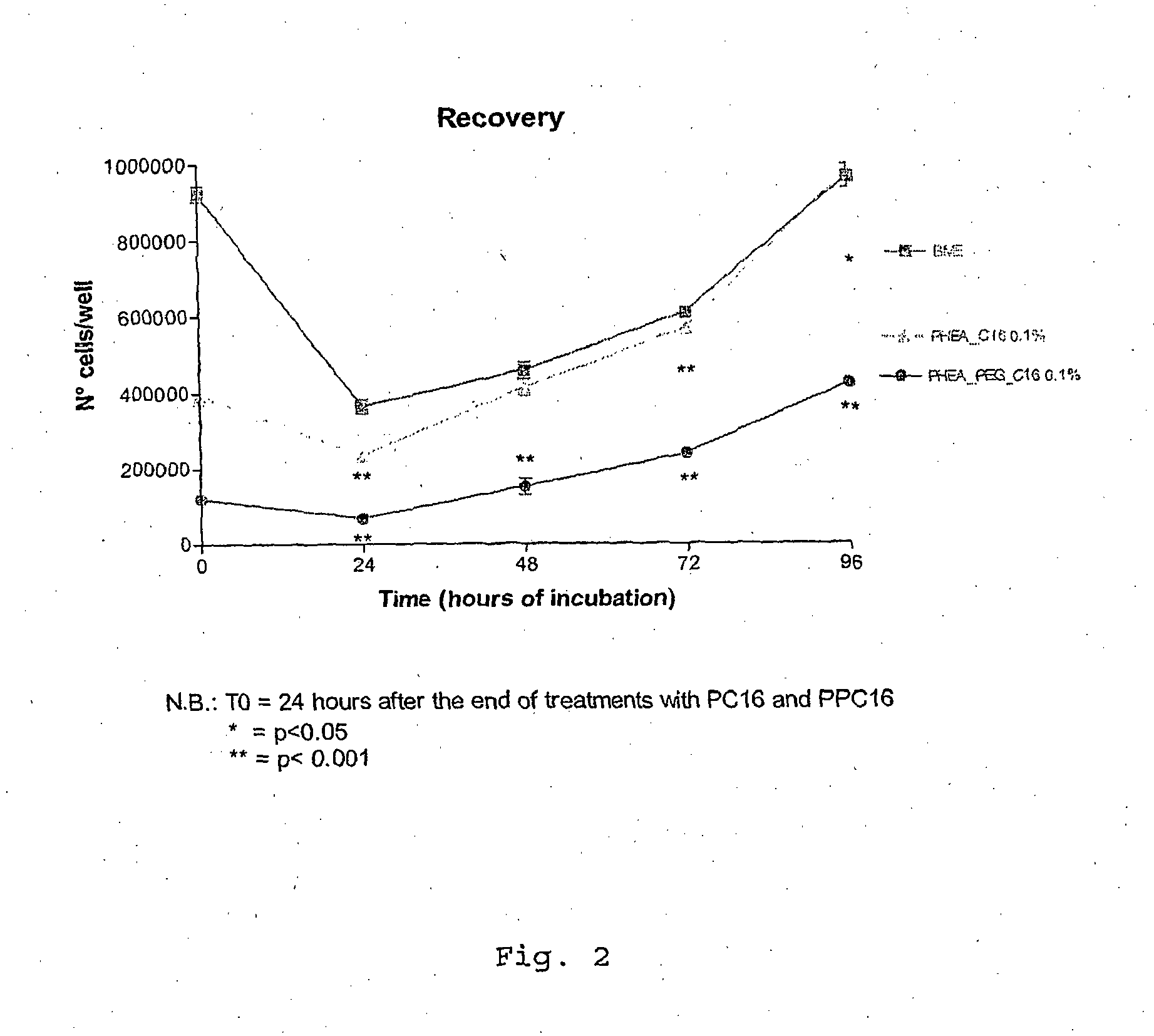 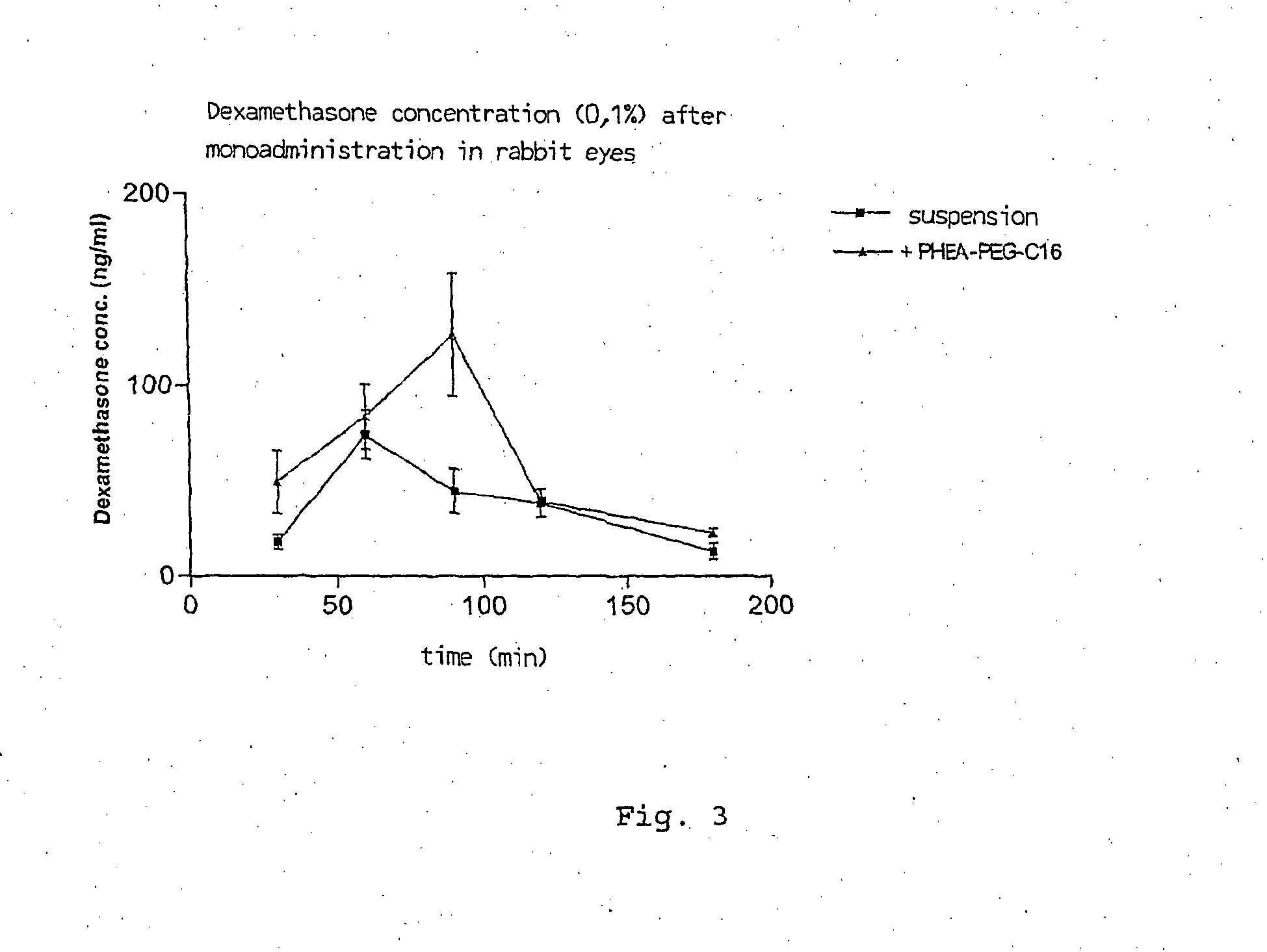