[0001] The present invention relates to a radio frequency (RF) power generator for an induction coil for exciting an inductively coupled plasma (ICP) for spectrometry.

[0002] A reference herein to a patent document or other matter which is given as prior art is not to be taken as an admission that that document or matter was, in Australia, known or that the information it contains was part of the common general knowledge as at the priority date established by the present application.
[0003] In spectrometry, an ICP may be used as a source of ions for mass spectrometry (MS) or as a source of light for atomic optical emission spectrometry (OES). The ICP apparatus may consist of one or more water-cooled induction coils mounted coaxially with a torch assembly through which argon gas is introduced at carefully controlled rates. RF electrical power is supplied to the induction coils. The argon does not conduct electricity and so is not heated by the RF electromagnetic field of the induction coils until the plasma is "struck", for example by a small electrical discharge created in the argon by a high voltage spark. This discharge produces enough electrons and ions to interact with the RF electromagnetic field and thereby generates sufficient heat for the process of ion and electron generation to become self-sustaining, thereby sustaining the plasma.
[0004] In spectrometry applications the temperature of the plasma is typically in the range 3000K to 10,000K. The frequency of the varying electromagnetic field can be in the range of a few MHz to many GHz, but a particularly useful range, where it is relatively easy to excite the plasma to an appropriate temperature is between 10MHz and 50MHz.
[0005] The generator for supplying the RF electrical power must be capable of generating sufficient power for exciting and maintaining the plasma, for example in the region of 500W to 3kW. It must also be capable of handling rapid and significant changes in the load impedance, as occurs for example when a plasma unexpectedly extinguishes. It must also be able to handle non-constant load impedance conditions as occurs for example between excitation and sustained generation of the plasma.
[0006] Another significant factor is the cost of an RF generator in a spectrometry instrument. Spectrometry instrumentation is expensive and the field is competitive, thus there are cost constraints on components such as the RF generator or oscillator if a manufacturer of such instruments is to remain competitive in the market.
[0007] EP-A-0 851 572 discloses a high frequency oscillator system having a series oscillator circuit that includes a load conductively coupled with a plasma generator. Inductive coupling between a gate drive circuit and a load circuit is provided in one embodiment by two discrete transformers, each comprising a primary winding which is connected to the load circuit and a secondary winding which is a portion of the gate drive circuit.
[0008] US 2006/0017388 A1 discloses a high frequency oscillator system that includes a load conductively coupled with a plasma generator.
[0009] An object of the present invention is to provide a relatively inexpensive RF power generator for exciting and sustaining an inductively coupled plasma for spectrometry.

[0010] According to the invention there is provided a radio frequency (RF) power generator as defined in claim 1. The RF power generator includes an induction coil for exciting an inductively coupled plasma (ICP) for spectrometry.
[0011] In the embodiments of the invention, a full-bridge of RF MOSFETs (Metal- Oxide-Semiconductor Field Effect Transistors) switches at the RF frequency and is connected by a coupling network to the parallel connected induction coil and capacitance. The gate drive voltages for the MOSFETs are derived from the inductive coupling loops placed adjacent to the supporting leads for the plasma induction coil. This arrangement is advantageous because it reduces costs as it uses the supporting leads as primary inductors and thus avoids the need for additional components. Also the inductive coupling loops (ie. secondary inductors) can be relatively cheaply provided, for example via conductive tracks on a printed circuit board. The DC supply for the solid-state switching circuit may be derived from an AC utility supply using an AC to DC converter. The AC-DC converter may be isolated or non-isolated and preferably is a two-stage converter, having an AC to DC power factor correcting (PFC) converter followed by an isolated DC- DC converter. A non-isolated DC-DC converter may also be used. Output control for the radio frequency power generator may be by variation of the DC supply voltage, with possibly a second stage of a two-stage converter being utilised for the variation of the output DC voltage. The output variable that is regulated could be output power, current, voltage or some combination of these that changes based on the prevailing plasma conditions. Regulating the current in the induction coil, rather than the power or some other quantity, makes control easy and does not require any change when the plasma is initiated or when it extinguishes. At these times the plasma impedance changes over a large range but regulating the current ensures that a strong magnetic field is present for ignition and keeps the power acceptably constant when the plasma is present.
[0012] Compared with prior art solid-state generators, preferred embodiments of the present invention have a higher supply voltage, making parasitic inductances less of a problem, and have good control of overvoltage by the clamping inherent in a full-bridge configuration of the MOSFETs. Such embodiments have advantages over prior solid-state generators using only one or two switching components in that four components are used and the heat loss is distributed between them, making the task of cooling simpler.
[0013] Also in some embodiments of the invention, by designing the loads seen by a MOSFET switching device to be such that the MOSFET output
capacitance is substantially discharged before the MOSFET is turned on, the efficiency of the power generator circuit can be made very high.
[0014] For a better understanding of the invention and to show how it may be performed, embodiments therefore will now be described, by way of non-limiting example only, with reference to the accompanying drawings.

Figure 1 is a functional block diagram representative of an RF power generator circuit;

Figure 2 illustrates a power generator according to a preferred embodiment of the invention which employs a full-bridge of RF MOSFETs;

Figure 3 shows the generator circuit of Figure 2 but which includes a modification for controlling the RF load current;

Figure 4 shows another modification for the generator circuit of Figure 2 which employs a capacitive divider in the load circuit;

Figure 5 illustrates another embodiment of a power generator according to the invention using mutually coupled interlaced plasma induction coils;

Figure 6 is an isometric illustration of portion of a structure for an embodiment of the invention showing inductive loop portions of the gate drive circuitry.

an induction coil (26; 60) for exciting an inductively coupled plasma, ICP, for spectrometry;

a gate drive circuit (24) for each solid state switching device (20); 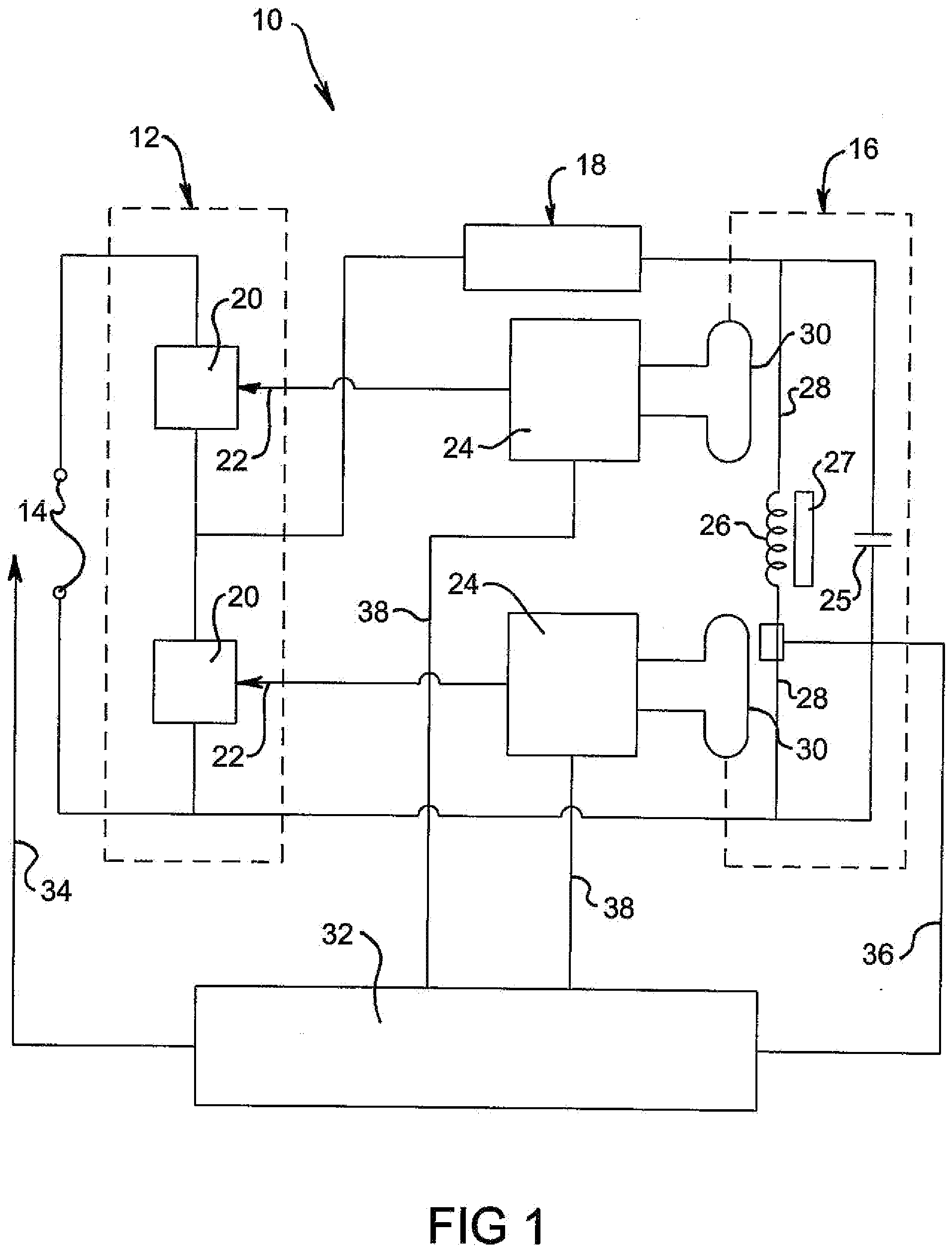 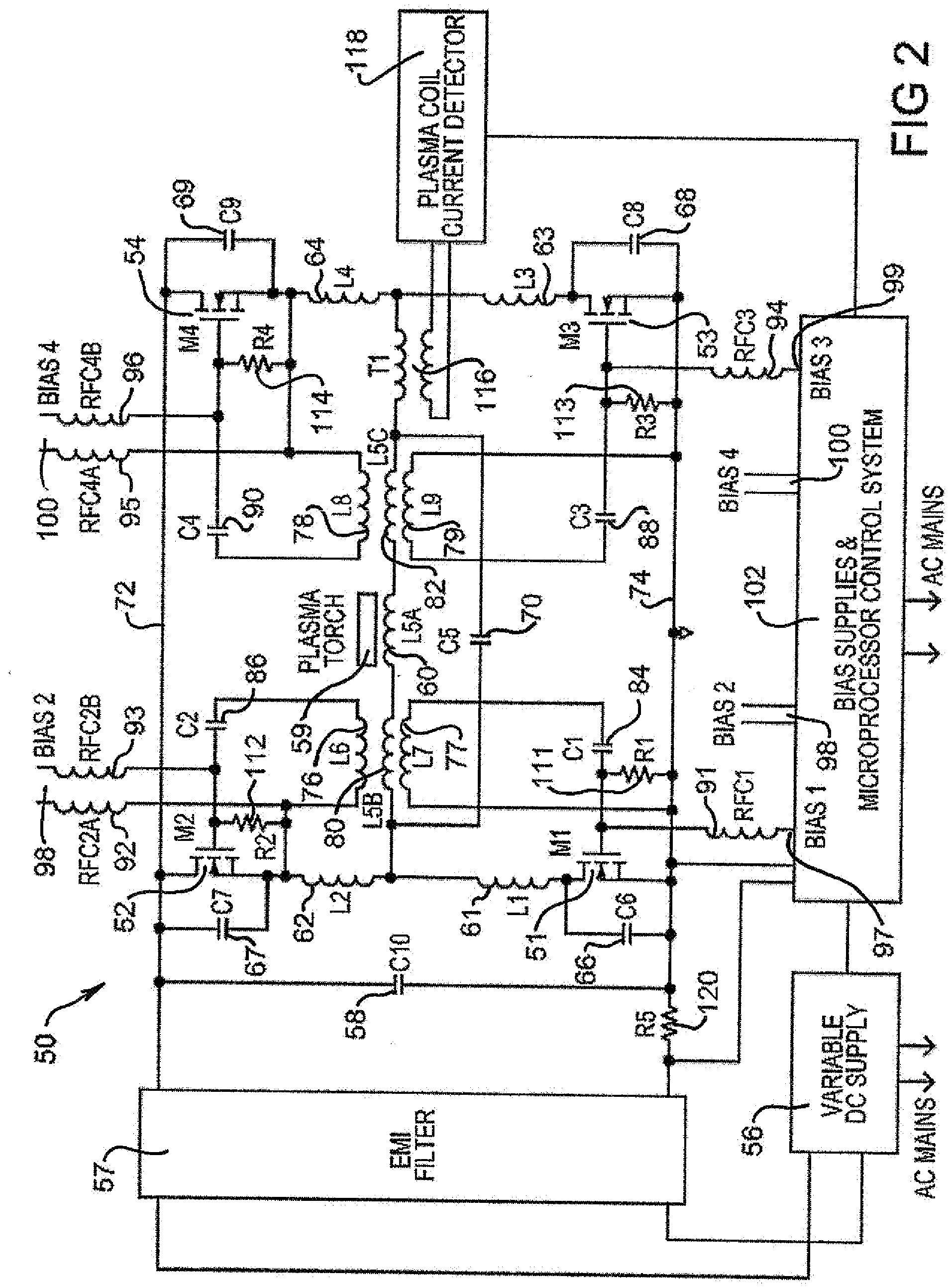 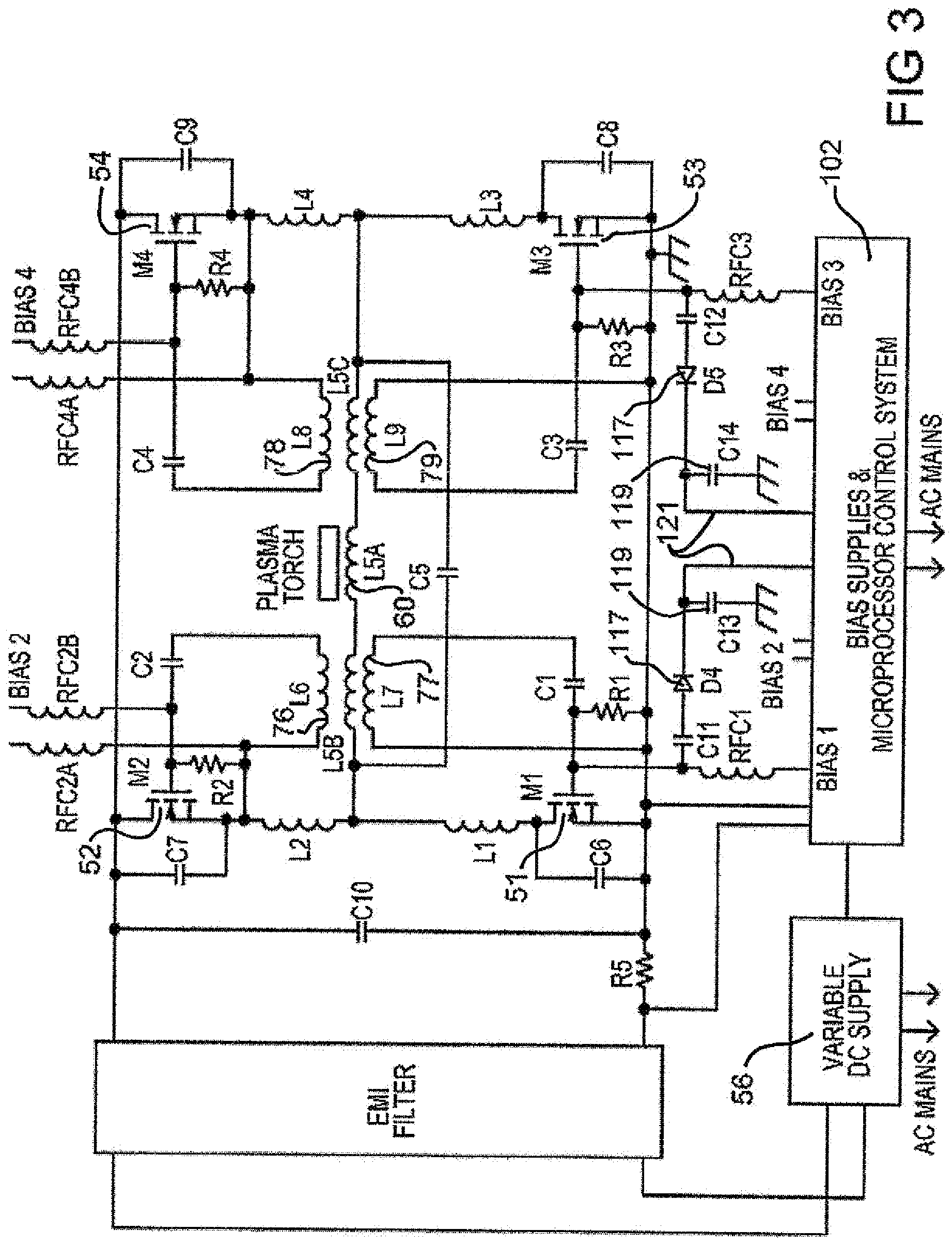 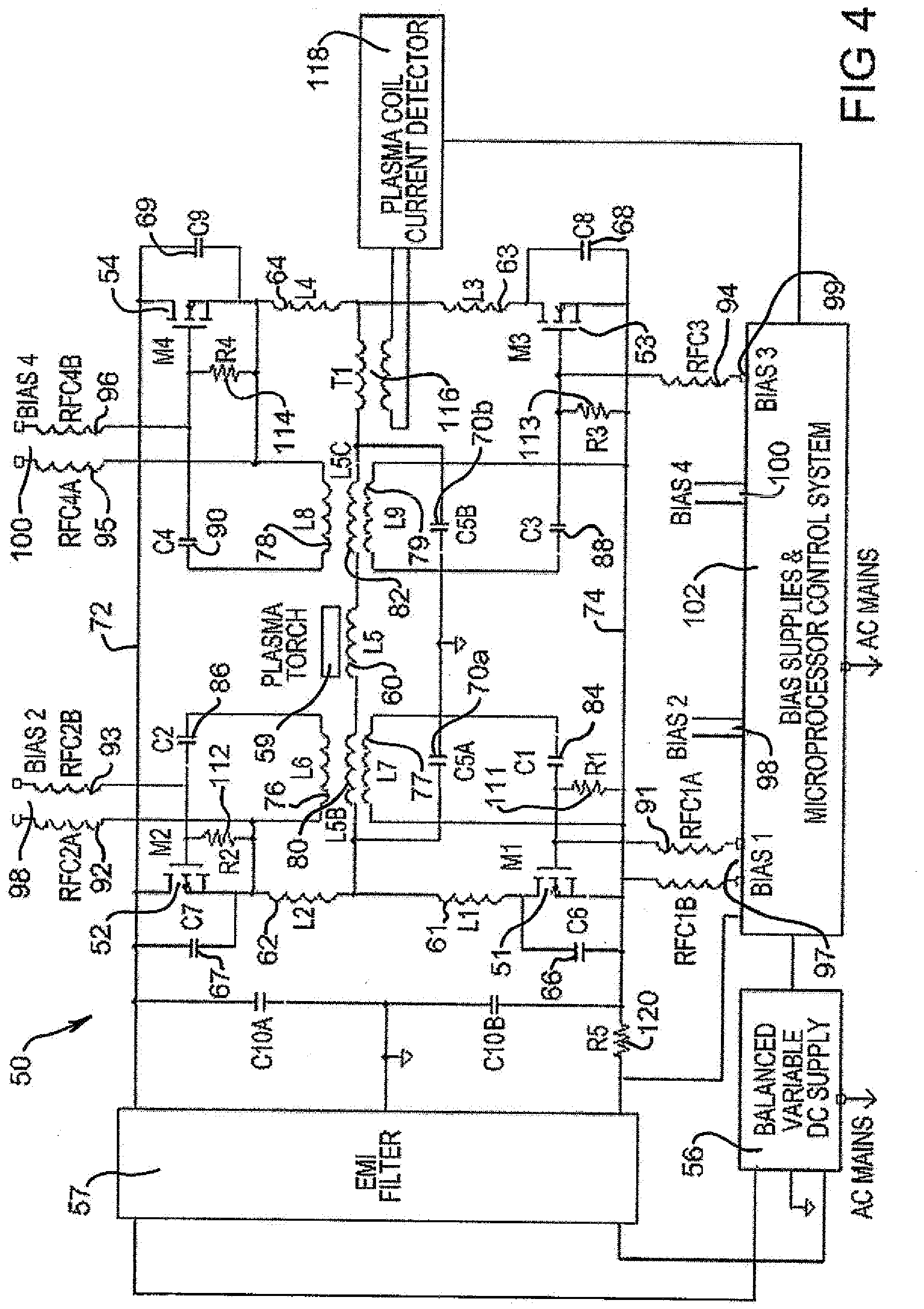 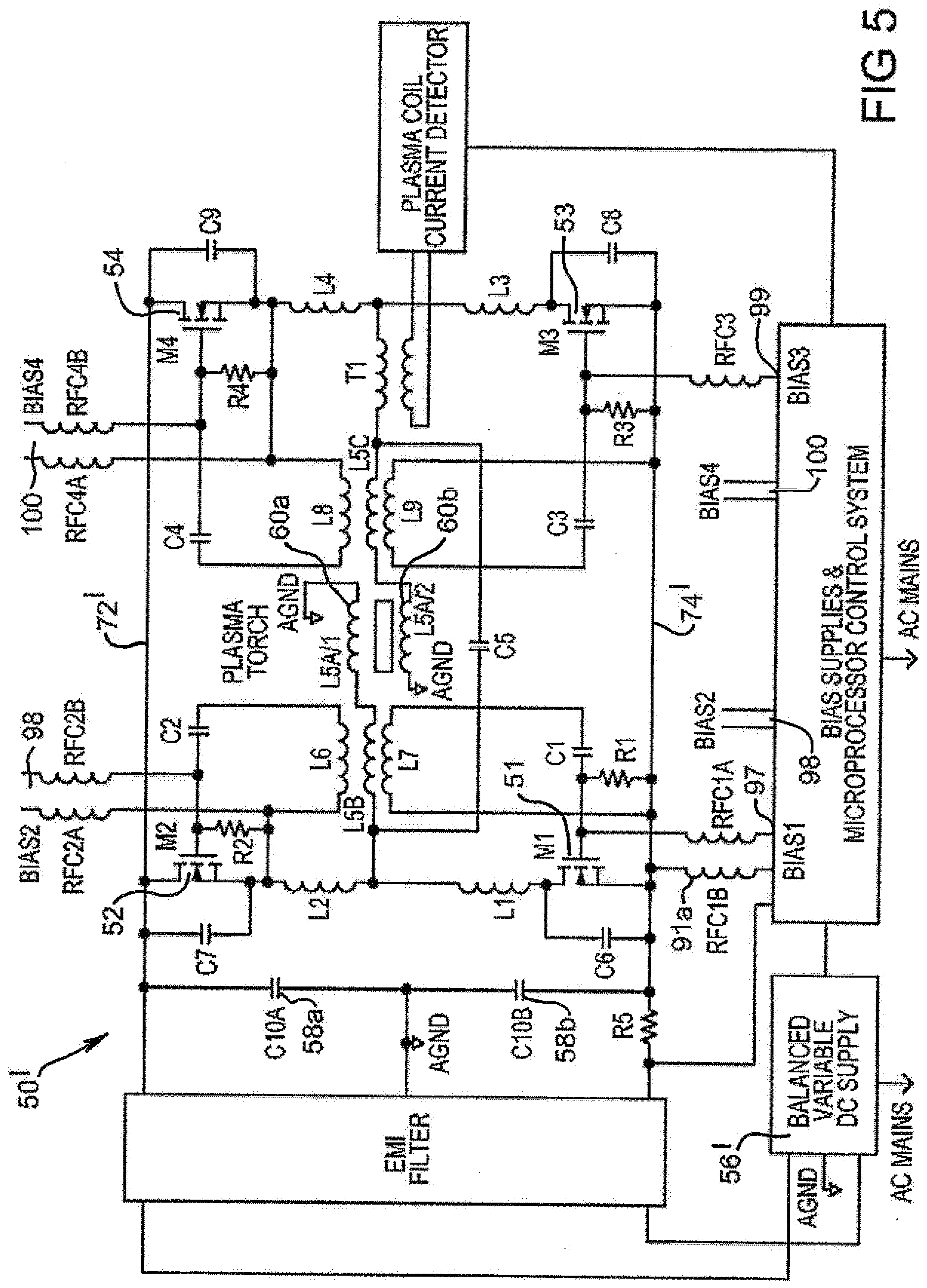 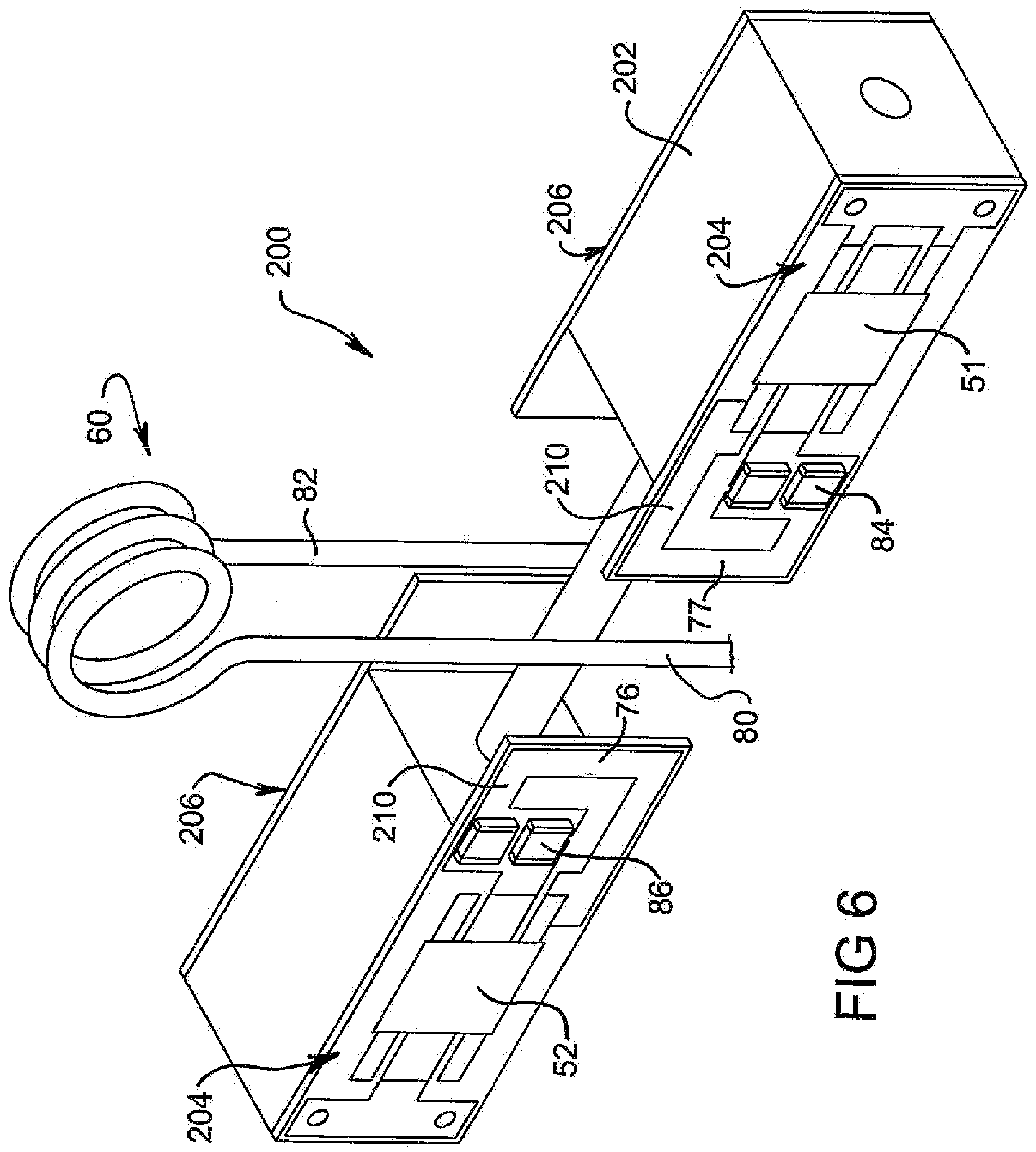