[0001] This invention relates to determination of filter loading and more particularly to the use of microwave sensing to determine filter loading.
[0002] In many realms there is a need for accurate sensing of the amount of material that has been captured by a filter. An example is the need to determine filter loading of soot on a diesel particulate filter (DPF). The amount of loading on a diesel particulate filter must be known in order to determine appropriate conditions for start-up of regeneration as well as monitoring conditions to determine when complete regeneration has been achieved. The level of loading is important in this context because regeneration of a DPF is often through an uncontrolled burn in which soot is ignited by the presence of free oxygen and a combustion wave is generated through the filter. Under certain conditions, it is possible that regeneration will produce temperatures that are very high resulting in large thermal stresses that can result in limited fatigue life of the filter and ultimately its destruction. Thus, the level of soot loading is important for successful filter regeneration.
[0003] It is well known that there are several methods for determining the loading of a filter. The most commonly investigated method is by measurement of the pressure drop across the filter. This method can be combined with expert systems that calculate the amount of soot that has been captured through a cumulative calculation of soot production through an engine.
[0004] An object of the present invention is the application of microwave technology to the determination of the status of loading of traps or filters.
[0005] WO92/02807 discloses a method for determining the loading of a PM filter wherein the level of soot accumulation can be monitored by detecting changes in the effective dielectric properties of the filter medium, and subsequently the changes in either the dielectric constant or the dielectric loss factor can be detected for determining the loading of a PM filter. WO92/0280 describes an advantage of the transmission loss measurement system to average the signal over a frequency range, to avoid problems with power source frequency drift with time. Measurement error induced by frequency shift in the source signal is inherent to the invention disclosed in WO92/02807 which requires averaging over a large frequency range to reduce, and is a clear disadvantage.

[0006] The method according to the invention for determining loading of a filter having a first dielectric constant with contaminant material having a second dielectric constant, the filter contained within a metallic container forming a microwave cavity, includes establishing microwave energy in the cavity and monitoring changes in the cavity microwave response. It is necessary that the second dielectric constant be different from that of the media which the contaminant material is displacing, usually air, exhaust gases or a fluid. The changes in cavity microwave response are related to filter loading. In a preferred embodiment, the microwave energy includes multiple cavity modes thereby allowing determination of spatial distribution of the contaminant material loading.
[0007] In a preferred embodiment, the microwave cavity response includes a shift in frequency of a resonant mode. Alternatively, the microwave cavity response includes a shift in quality factor Q of a resonant mode. The microwave cavity response may include a shift in amplitude of the microwave's signal at resonance.
[0008] It is preferred that at least one antenna be used to transmit/receive microwave energy. In a preferred embodiment, one antenna only is used in a reflection mode to transmit/receive the microwave energy. Two antennas may be used in a transmission mode with one antenna transmitting and the other antenna receiving. Instead of an antenna, at least one waveguide may be used to transmit/receive the microwave energy. In an embodiment, one waveguide is used in reflection mode to transmit/receive the microwave energy. Alternatively, two waveguides may be used in transmission mode with one waveguide transmitting and the other wav guide receiving.
[0009] In an important embodiment, the filter is a diesel particulate trap for removing particulate matter from the exhaust of a diesel engine. The particulate matter may be soot.
[0010] In still another embodiment, the metallic container includes a cylindrical portion between two transition cones, one of which is connected to an exhaust pipe. The microwave energy may be in the S-band. A preferred filter material is cordierite. Another suitable filter material is silicon carbide. It is preferred that both low order and high order cavity modes are used to monitor trap loading. In this embodiment, it is preferred that the frequency of operation be chosen so that the modes are operating at cutoff at reduced size inlet and outlet pipes of the filter.
[0011] When two antennas or waveguides are used, they may be located on opposite sides of the filter or on the same side of the filter. It is preferred that the antennas and waveguides be located on the downstream side of the filter to prevent contamination.
[0012] The microwave energy may be provided by a modified microwave chip and the microwave energy may be monitored by a diode with or without amplification. Cavity monitoring may use lock-in detection or hetereodyne detection.

Brief Description of the Drawing

Fig. 1 is a perspective view of a canned diesel particulate filter according to an embodiment of the invention.

Fig. 2 is a cross-sectional view of another embodiment of the invention.

Fig. 3 is a graph of experimentally determined S21 transmission as a function of frequency (magnitude of S21 is shown).

Fig. 4 is a graph of experimentally determined S11 (reflection) response as a function of frequency.

Fig. 5 is a graph showing an expanded view of the transmission mode of Fig. 3.

Description of the Preferred Embodiment

establishing microwave energy in the cavity;

monitoring changes in quality factor, Q, of a resonant mode in the microwave cavity; and

determining filter loading based on the monitored changes in quality factor Q.

one or more antennas (20, 22) arranged to monitor changes in microwave cavity response, the changes being related to filter loading,

a microwave generator and detector operable to determine the microwave properties of the cavity; and

associated electronics and signal processing adapted to determine the filter loading using the method according to any of the preceding claims. 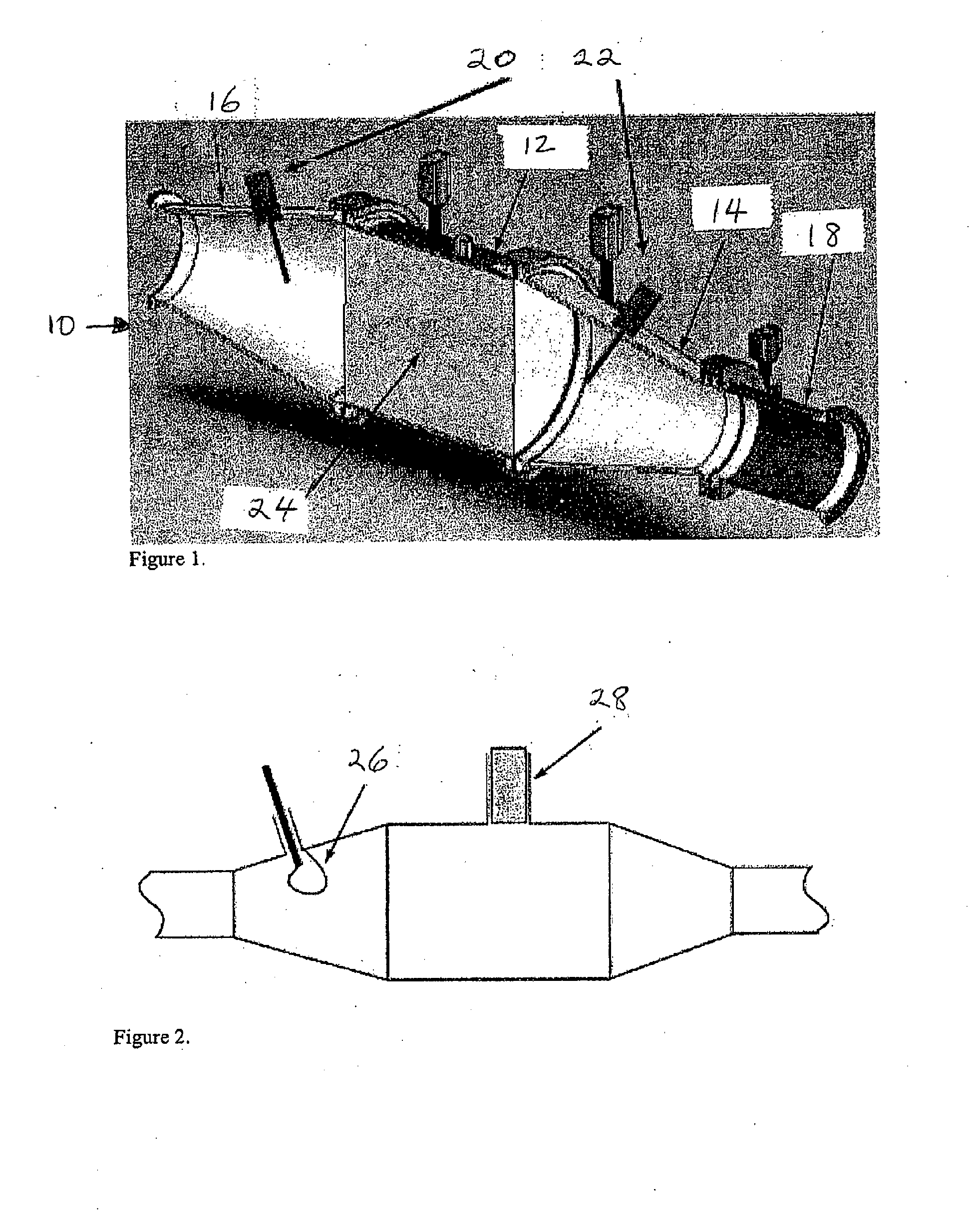 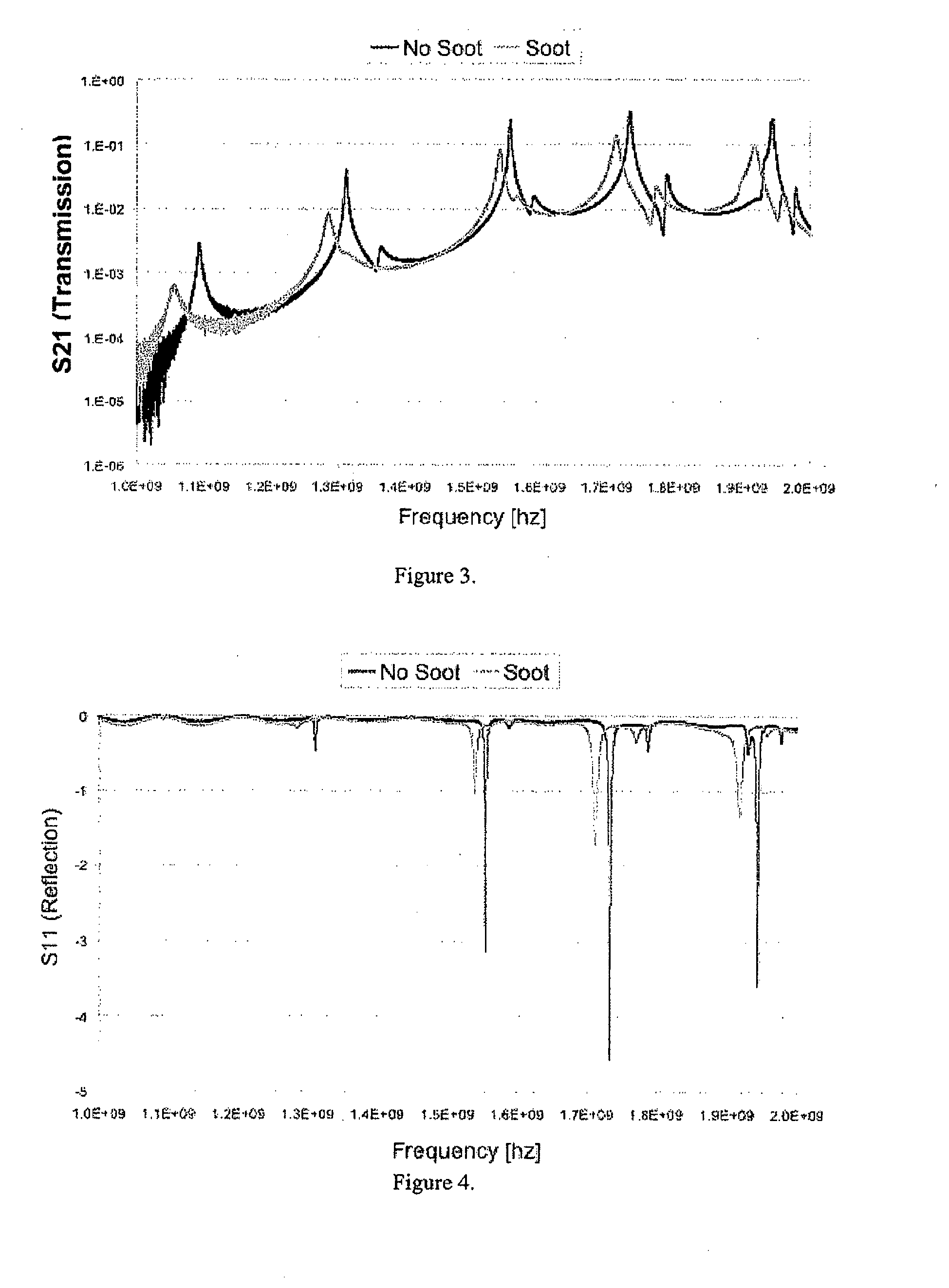 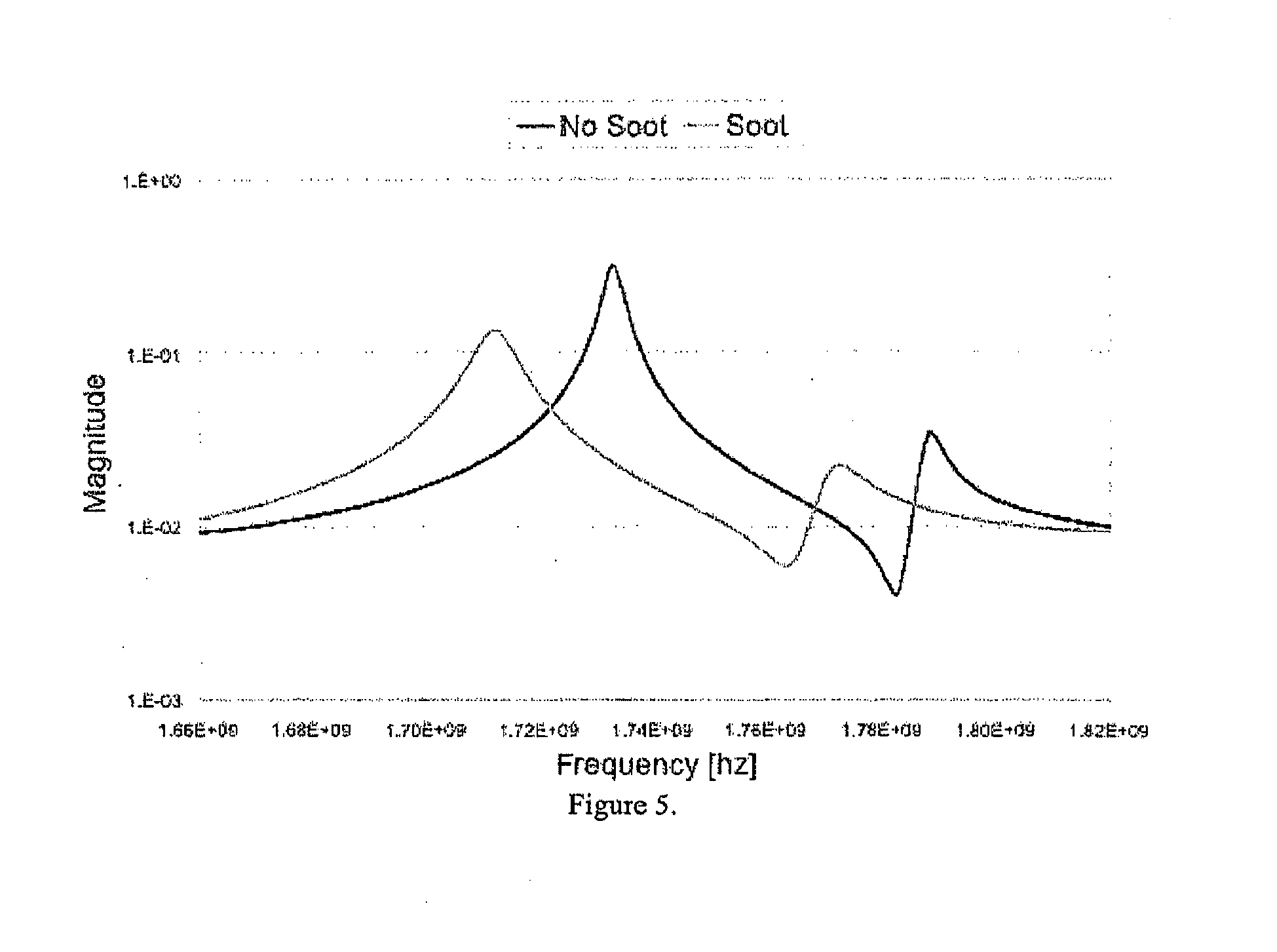