[0001] The present invention relates to an external storage medium adapter.

[0002] The present invention relates to an external storage medium on which data can be stored in encrypted form. More particular, it relates to an external storage as described in European Patent application no. 06101719.0 filed by the same applicant as the present application.
[0003] The external storage as described in this application no. 06101719.0 can store data in encrypted form together with access credentials which allow the decryption of the stored data. The external storage detects if it is disconnected from its host, and then a counter or timer starts and if an expiration criterion based on an expired time or a predefined number of counted events is met the access to the data is denied due to the fact that the data cannot be decrypted anymore since the access credentials which were stored on the external storage are deleted.
[0004] In this manner data can securely be stored on the external storage because the access is not unlimited but will be made impossible after the expiration criterion is met. E. g. if the storage medium gets lost or is stolen, the unauthorized user cannot access the storage after the expiration criterion is met, e.g. after the expiration of a certain time. If this time is set sufficiently small (e.g. a few minutes) it is extremely unlikely that the data stored on this device can be accessed by a user for which the data are not intended.
[0005] Fig. 1 schematically illustrates a configuration of an external storage as described in the previous European Patent application no. 06101719.0. When it connects to a "trusted host" data and access credentials can be written onto the storage module. There, data will be encrypted and stored on encrypted user data storage 27 after encryption of the data by the encryption engine 25. The credentials needed to encrypt data and decrypt the encrypted data are written into credential storage 24 by the trusted host. Connectivity detection module 22 detects when the storage is disconnected from the host and then the timer 23 starts to operate. As long as the expiration condition (the expiration of the time limit defined by the timer) is not met, any host other than the trusted host can access the encrypted data through using the credentials stored in credential storage 24. After expiration of the timer, however, the access credentials are deleted and access is not possible anymore. A more detailed description of this and other embodiments may be found in the aforementioned European patent application no. 06101719.0.
[0006] However the external storage as defined in the previous patent application no. 06101719.0 mentioned before has limited amount of persistent memory because the built-in persistent memory of the external storage medium has a fixed size. To extend the storage capacity, a new storage medium is to be used/purchased in case of the previous external storage medium. It is therefore desirable to overcome this deficiency.
[0007] US 2004/0143733 A1 discloses a mediator for the protection of data in storage devices over a network. The mediator connects over the network to one or more data clients and to one or more data storage devices, and provides secure storage of data for the data clients on the data storage devices. The mediator functions as a central point for the encryption of data from the data clients to be stored on the storage devices, as well as decryption of the encrypted data retrieved from the storage devices for delivery to the data clients. The mediator can handle multiple protocols, such as IP protocols, file service protocols, and block device protocols; multiple storage technologies such as Fiber Channel and Ethernet; and multiple services such as block, file, and database services. The mediator can also perform various fictions such as protocol translation. The mediator benefits from the fact that all storage devices, as well as data clients, are connected over a network, thereby allowing flexibility, expandability, and scalability of configurations without the limitations imposed by local interconnectivity. At the same time, however, the mediator provides secure virtual storage to data clients without requiting them to be involved in any of the encryption or decryption operations. In particular; data clients are not burdened with compulsory management of any keys used in the protection of stored data. As a result, the encryption/decryption of stored data can be optimized for security without concerns for key distribution.
[0008] US 2003/0105967 A1 discloses an apparatus for encrypting data between a processor and a memory and a method thereof are disclosed. The processor includes: a module for encrypting an input data or decrypting an encrypted data; a key table for storing secret keys for data encryption/decryption; and a control unit for generating an index for the encrypting operation of the module. The memory includes: a memory cell array for storing data encrypted by the module of the processor; and a key state memory for storing the index generated in the control unit of the processor and used for the encryption of the input data.

an operations buffer for storing all write operations until it is detected that the file system is in a consistent state again, and as soon as this happens, the files touched by the write operation are updated on the persistent storage device.

[0012] The operations buffer in one embodiment is also used to collect operations on blocks until it can be determined what kind of operation it is and on what file. After that, in the block/file mapping based embodiment, the adapter is able to contact the separate storage device on its file interface to read/write the file.
[0013] According to one embodiment the consistency of the file system is detected based on one or more of the following triggers:

a certain time without write operations;

write operations to certain blocks such as those containing directory structures or file system tables or predefined files;

[0014] According to one embodiment credentials are added to said credential storage on the adapter by storing them as special files in either a specific location or with a specific name so that they can be identified by the encryption engine. This enables the writing of credentials without a specific dedicated command set. Normal mass storage device class commands can be used for writing credentials.

Fig. 1 schematically illustrates an external storage medium of a related invention as described in an earlier application.

Fig. 2 schematically illustrates an external storage medium adapter according to an embodiment of the invention.

Fig. 3 schematically illustrates an external storage medium adapter according to a further embodiment of the invention.

Fig. 4 schematically illustrates an operation of an embodiment of the invention.

Fig. 5 schematically illustrates an operation of a further embodiment of the invention.

Fig. 6 schematically illustrates a mapping to be used with an embodiment of the invention.

a first interface for connecting to said computer and for receiving through said interface from said computer data which is to be stored in encrypted form on said separate persistent storage device;

a credential storage (24) for storing said one or more credentials used to encrypt or decrypt said data, wherein

means for building a virtual file system, said virtual file system being generated by said mapping module (292) inside said adapter which recreates the directory structure inside the adapter for accessing data on said separate persistent storage device via a file-based interface;

3. The external storage medium adapter of one of the preceding claims, further comprising:

an operations buffer (291) for storing all write operations until it is detected that the file system is in a consistent state again, and as soon as this happens, the files touched by the write operation are updated on the separate persistent storage device.

4. The external storage medium adapter of claim 3, wherein the consistency of the file system is detected based on one or more of the following triggers:

a certain time without write operations;

write operations to certain blocks such as those containing directory structures or file system tables or predefined files; 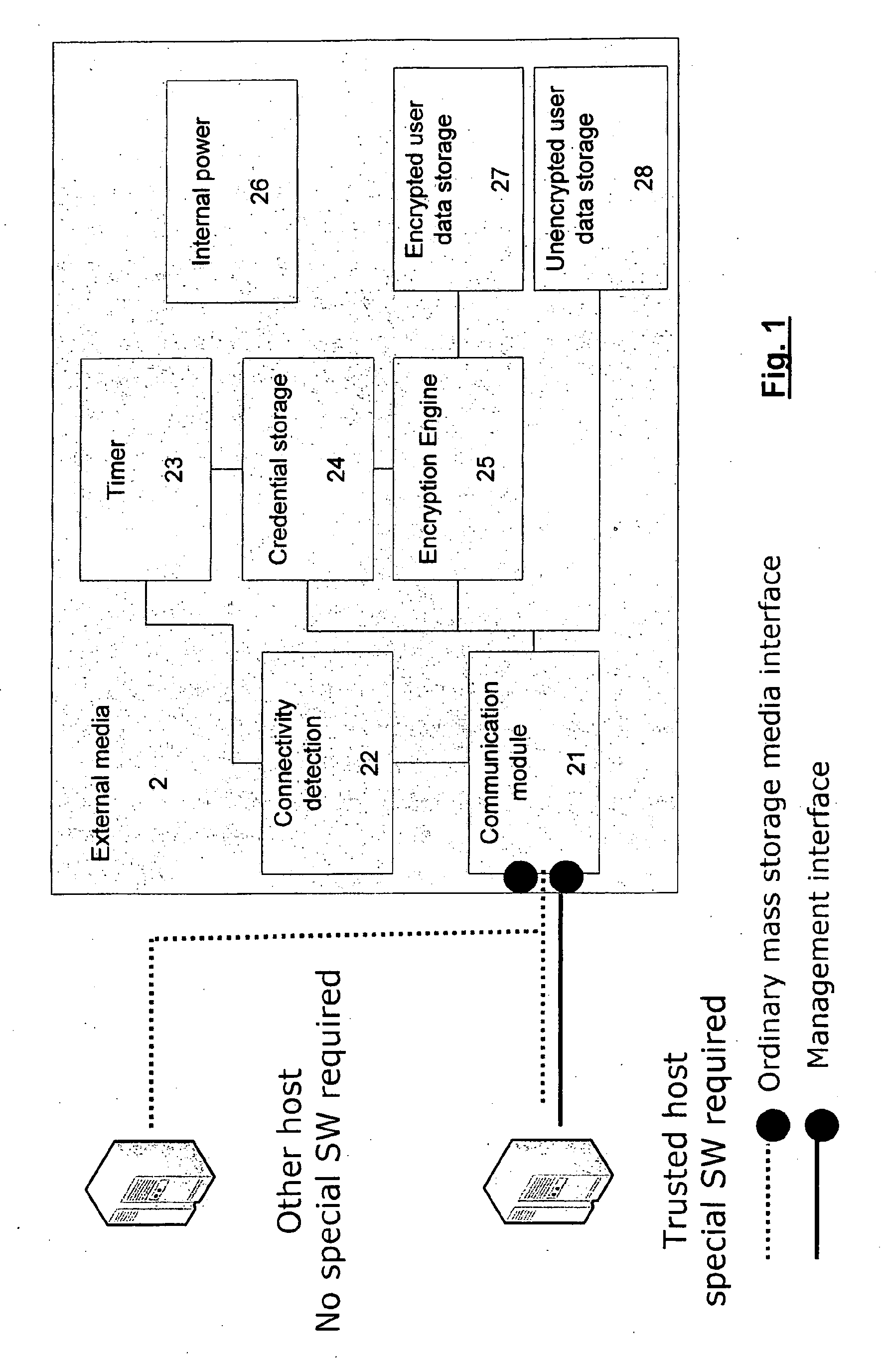 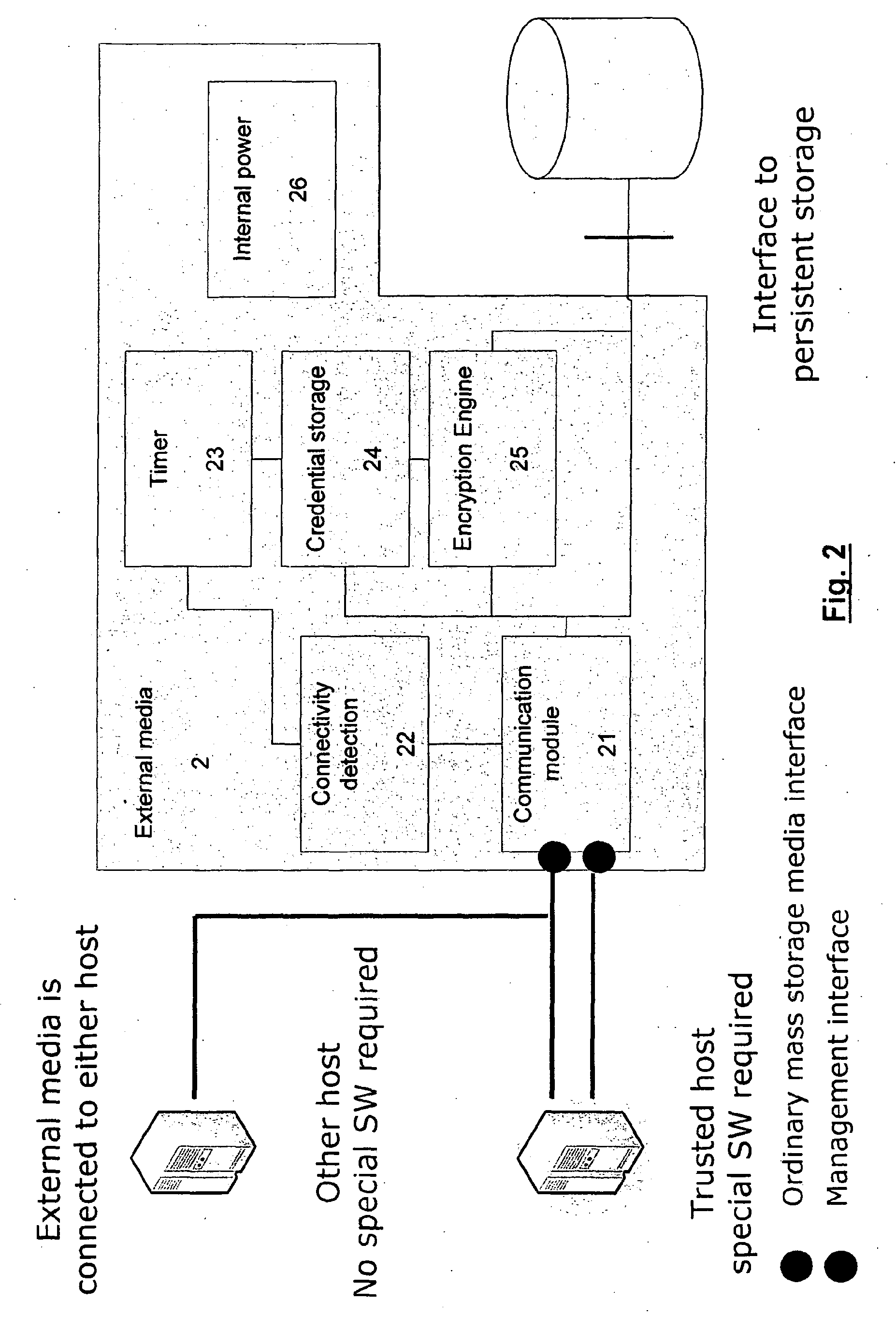 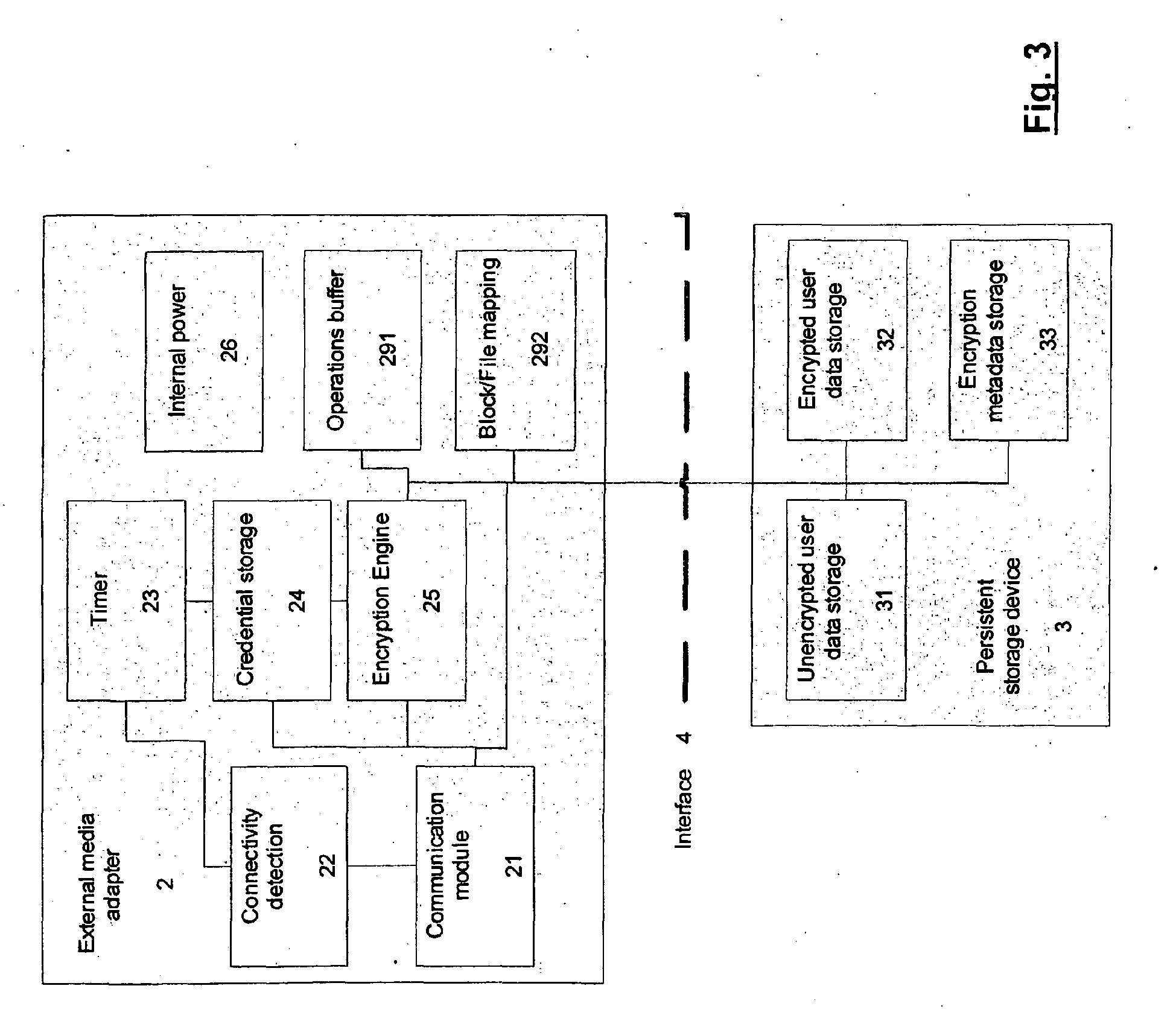 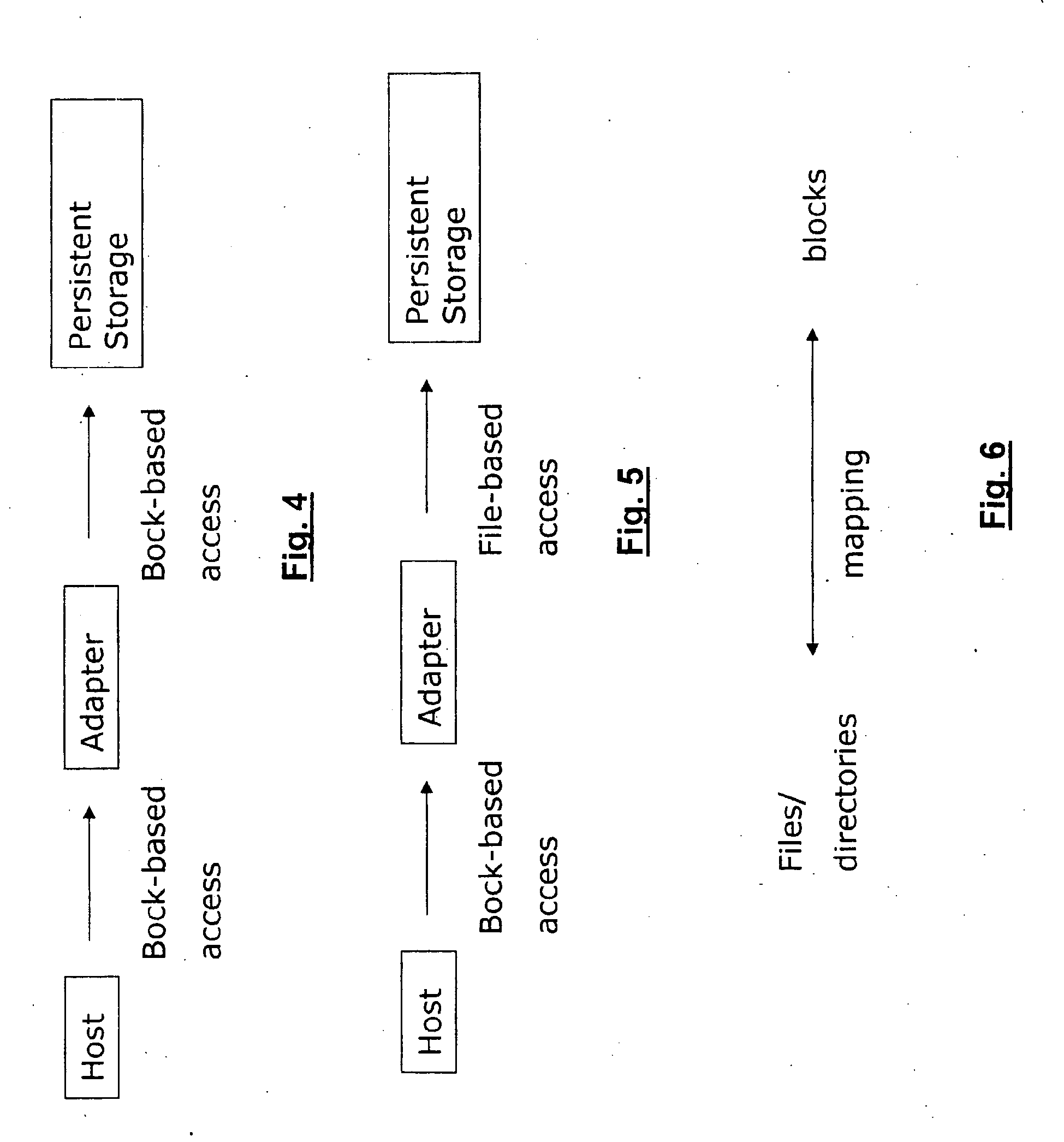