[0001] The present invention relates to a reactor shield and a reactor for HVDC system.

[0002] In many power applications, such as in HVDC systems, a DC reactor is connected in series with a converter to reduce the harmonic currents on the DC or AC side of the converter or to reduce the risk of commutation failures by limiting the rate of rise of the DC line current at transient disturbances in the AC or DC systems. The converter reactor is surrounded by a shield to avoid inductive heating of the walls of the building in which the reactor is provided and to decrease the magnetic coupling between the three phases. The shields may also contribute to the RI shielding.
[0003] Different kinds of shield designs have been used. One example is solid aluminium plates. However, this solution has the drawback of the risk for sound emission. Another drawback is difficult construction on site due to welding operations when the plates are joined to surround the reactor.
[0004] Some prior art solutions involve water cooling of the shield. However, this leads to an expensive and complex arrangement.
[0005] EP 1 480 504 describes a reactor shield and a reactor comprising an aluminum/aluminum-alloy casing having a specific conductibility below 0.4 OMEGA .mm2/m. In the casing plates integrate in supporting frames with tin-plated sections linked to the plates with TP screws. The SF and plates interlink mechanically/electrically so as to be conductive. A sealing protects contact surfaces between the section and the plates against the surrounding atmosphere.

[0011] The invention is now described, by way of example, with reference to the accompanying drawings, in which:

Fig. 1 is a schematic overview of a reactor and a reactor shield according to the invention,

Fig. 3 is a perspective overview of the frame of a reactor shield according to the invention,

Fig. 4 is a side view of a reactor shield according to the invention,

Fig. 6 is a top view of a wire loop comprised in a reactor according to the invention,

Fig. 7 is a side view showing the distribution of wire loops comprised in a reactor according to the invention,

Fig. 8 is a view similar to the one shown in Fig. 1 with an opening provided in the reactor shield, and

Fig. 9 is a detailed view of the opening shown in Fig. 6.

[0012] In the following a detailed description of a preferred embodiment of the present invention will be given.
[0013] In Fig. 1 there is shown a schematic overview of a reactor 10 provided inside a reactor shield 20. The reactor 10 could be any kind of reactor, such as a reactor provided in a HVDC system mentioned above, emitting electro-magnetic radiation. The reactor shield comprises a number of closed circular loops of electrically conductive wires 22 provided in mutually parallel horizontal planes. The wire loops and the reactor are provided co-axially about a vertical axis z, thereby providing for a uniform distance between the reactor and the reactor shield formed by the loops.
[0014] The wires are preferably twisted stranded wires made of copper or aluminium. The designs with stranded wire are favorable since the area per length unit is relatively large, reducing the skin effects that might appear. A twisted, stranded wire is expected to redistribute the current. Furthermore, the loops can be prefabricated from standard material, and only have to be mounted on site. They are also flexible in that wires can easily be added, redistributed or replaced by thicker ones if e.g. an upgrading to a higher reactor current is wanted. Furthermore, problems with sound emission are not expected.
[0015] An electrically conductive aluminium plate 40 with a thickness of 3 millimeters is optionally provided inside the closed loops in a position between the reactor 10 and the floor so as to prevent electromagnetic radiation from penetrating the floor, thereby generating heat in electrically conductive reinforcement in the floor.
[0016] To gain some physical understanding of the shielding mechanism and the influence of various parameters, a simple model of the reactor 10 and the reactor shield 20 is shown in Fig. 2. An inner loop, corresponding to the reactor 10, with self-inductance L1 and resistance R1 is connected to a constant current source with current i1 and angular frequency ω, resulting in a voltage v1. In an outer, short-circuited loop, corresponding to one of the closed wire loops 22 of the shield 20, with self-inductance L2 and resistance R2, a current i2 will be induced which counteracts the magnetic field from the inner loop due to the mutual inductance M.
[0017] The following equations apply:

where the partial magnetic fluxes φ1 = L1i1 and φ21 =M21i2, etc. Since the mutual inductance M21 = M12, M can be used instead.
[0018] If R2 = 0 it is clear that the total flux through the outer loop cannot change with time; if it was zero to start with, then it must remain zero. This means that the total return flux outside the outer loop must be zero as well. However, this does not imply that the local magnetic field is zero everywhere.
[0019] Switching to complex notation and assuming that i1=I1ejωt, (1) and (2) give

if R2 can be neglected)
whereafter (3) gives

[0021] If R2 can be neglected, (6) gives a simple expression for the effective inductance of the two loops as seen from the current source i1:

where ωMI1 is the electromotive force in the outer loop induced by the constant current in the inner loop. The power dissipation obviously has a maximum for R2 = ωL2. Equation (8) can be used to study how the power dissipation varies when the parameters (including the geometry) are changed, but first the dependences of the resistance, the self inductance and the mutual inductance on the geometry must be known.
[0023] The resistance is simple, but the skin effect can be a complication. By using stranded wires, the skin effect is reduced as has been explained above.
[0024] The self inductance is rather straight-forward for a circular loop:

where r2 is the loop radius, rw2 the wire radius and p the relative permeability for the outer loop (µ = 1 for aluminium). The skin effect can be a complication also here if the internal inductance, i.e., the first term between the parentheses, cannot be neglected.
[0025] The mutual inductance between two circular loops is more complicated since the analytical expression contains elliptic integrals. A more practical way is to use tables and simple expressions from the handbook literature. Simplified, for two concentric loops in the same plane the following equation apply.

(M in µH, r1 and r2 in cm) (10)
where F is a function of r1 and r2.
[0026] The current and thus the heat dissipation can be decreased considerably by a moderate increase of the shield radius. This is due to a decreased mutual inductance combined with higher self-inductance and resistance (equation 5).
[0027] The conductivity of the loops may vary for several reasons, such as wire material and temperature.
[0028] Referring to Fig. 3, the wire loops 22 are held in fixed mutual relationship by means of a frame 30, which is made up of eight equidistant vertical poles 32 of suitable dimensions and material, such as aluminium. Cross bars 34 are provided between the vertical poles 32 and attached thereto by means of e.g., stainless steel bolts so as to provide a stable frame to which the wire loops can be attached.
[0029] Fig. 4 shows a side view of the reactor shield 20 including the frame 30 and a number of wire loops 22 attached to the frame. It is here seen that the wire loops are unevenly distributed in a vertical direction, with a higher distribution density towards a vertical mirror line halfway up the reactor shield. This distribution density of wires is correlated to the density of the magnetic field. The purpose is to achieve well distributed losses in the shielding, thereby optimizing the use of material.
[0030] Fig. 5 shows a top view of the reactor shield 20 shown in Fig. 4. It is here seen that the wire loops 22 are attached to the inside of the vertical poles 32. This is preferably effected by means of T-bolts of stainless steel.
[0031] A wire loop 22 is shown in detail in Fig. 6. A wire having a length, which is given by the desired radius, is joined together at it ends by means of a jointing sleeve 22a. The operation of attaching the jointing sleeve can be performed on-site. This has the advantage of requiring less transport space for the wire. Alternatively, the wire loop 22 can be delivered to the site ready for mounting, but this requires more transport space.
[0032] A preferred wire loop distribution will now be described with reference to Fig. 7, wherein the cylindrical geometry is shown with the vertical z axis to the left. Z = 0 is a symmetry plane, about which the distribution of the windings is mirrored. In this figure, the reactor 10, having a radius r1 of approximately 1.5 meters, is shown as a rectangle. The reactor shield 20 is shown with a radius r2 of 3.0 meters. The denser distribution close to the symmetry plane z = 0 is due to the larger field from the reactor at that point.
[0033] In this preferred embodiment, the reactor shield comprises 80 short-circuited loops of stranded aluminium wire, half of which are visible in Fig. 7. The reactor shield radius r2 is 3 meters and the height of the shield is 7 meters. The conductor diameter is about 30 millimeters. The axial distribution of the wire loops is given in table 1 below.
Table 1

[0034] This design is both economical and flexible, and can easily be upgraded to higher reactor currents if necessary. An opening 24 for a bushing can easily be formed in the shield 20 by supports holding the wires apart, as is shown in Figs. 8 and 9. It is preferred that the wires and the supports around the opening be insulated from each other except for necessary grounding unless measurements have confirmed that insulation is not necessary.
[0035] Alternatively, the wires close to the opening are provided with increased material area in order to cope with the higher currents induced close to the opening.
[0036] An opening of constant height, enough for the bushing, and stretching around the shield has been simulated. The dissipation (W/m3) in the wires in this case in each wire closest to the opening has increased from about 500 W to 1500 W, i.e., a 70 % current increase, but only a small part of this would affect the bushing. In addition, the dissipation in the adjacent wires has decreased, giving only a 1.5 kW total increase for the shield. Even this uneconomical design could easily be handled, and in a real design the wires will form an opening only between two of the eight vertical supports, giving much smaller increase in dissipation.
[0037] A preferred embodiment of a reactor shield according to the invention has been described. A person skilled in the art realizes that this could be varied within the scope of the appended claims.
[0038] The inventive shield has been described as a shield for a reactor. In this context the term reactor should be interpreted broadly, covering any inductance or similar device emitting electromagnetic radiation.

2. The reactor shield according to claim 1, comprising an opening (24) in the shield provided by supports holding wires apart.

3. The reactor shield according to claim 2, wherein the wires close to the opening are provided with increased material area.

4. The reactor shield according to any of claims 1-3, further comprising an electrically conductive plate (40) inside the closed loops.

5. The reactor shield according to any of claims 1-4, wherein the wires comprise twisted stranded wires. 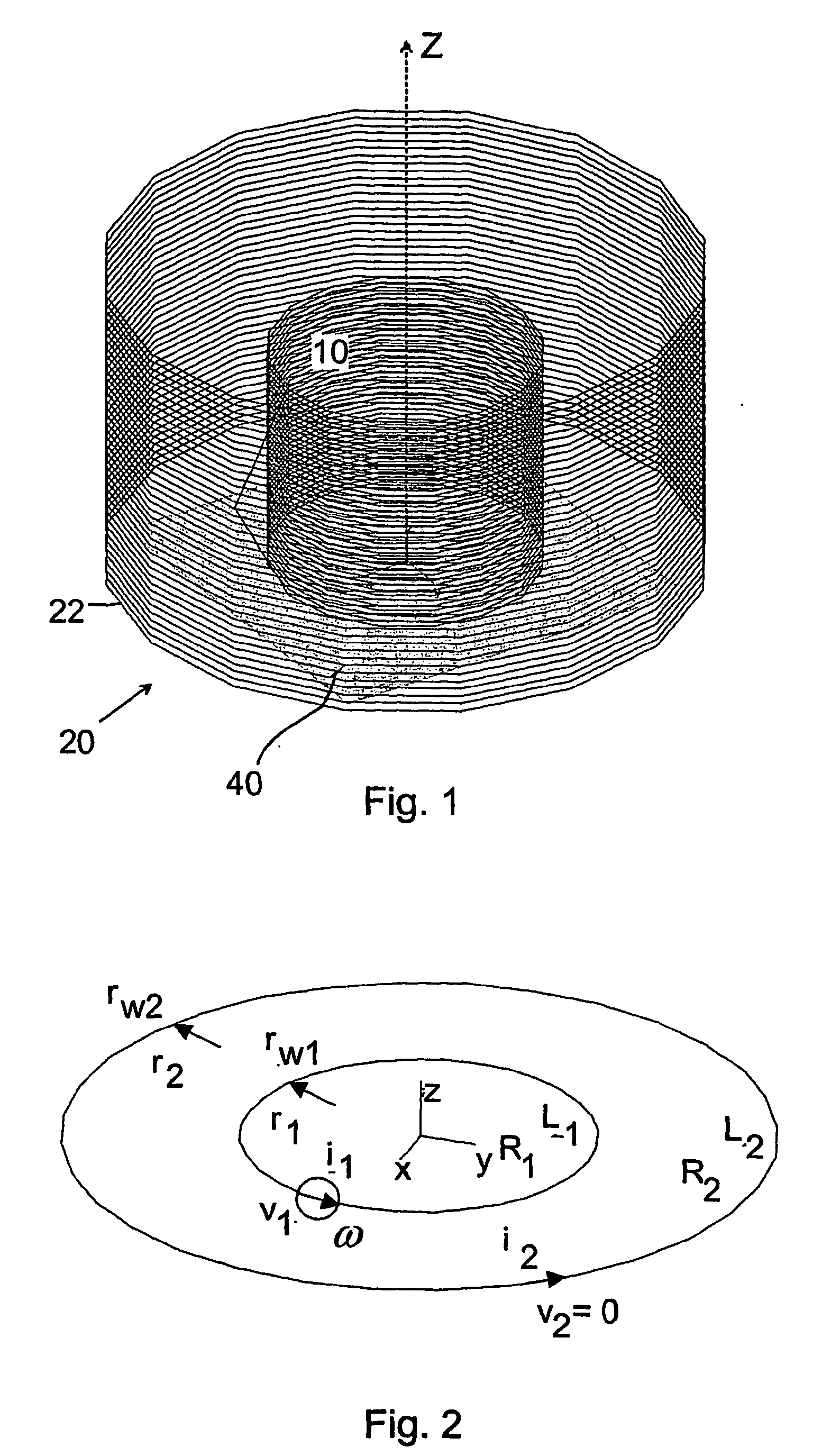 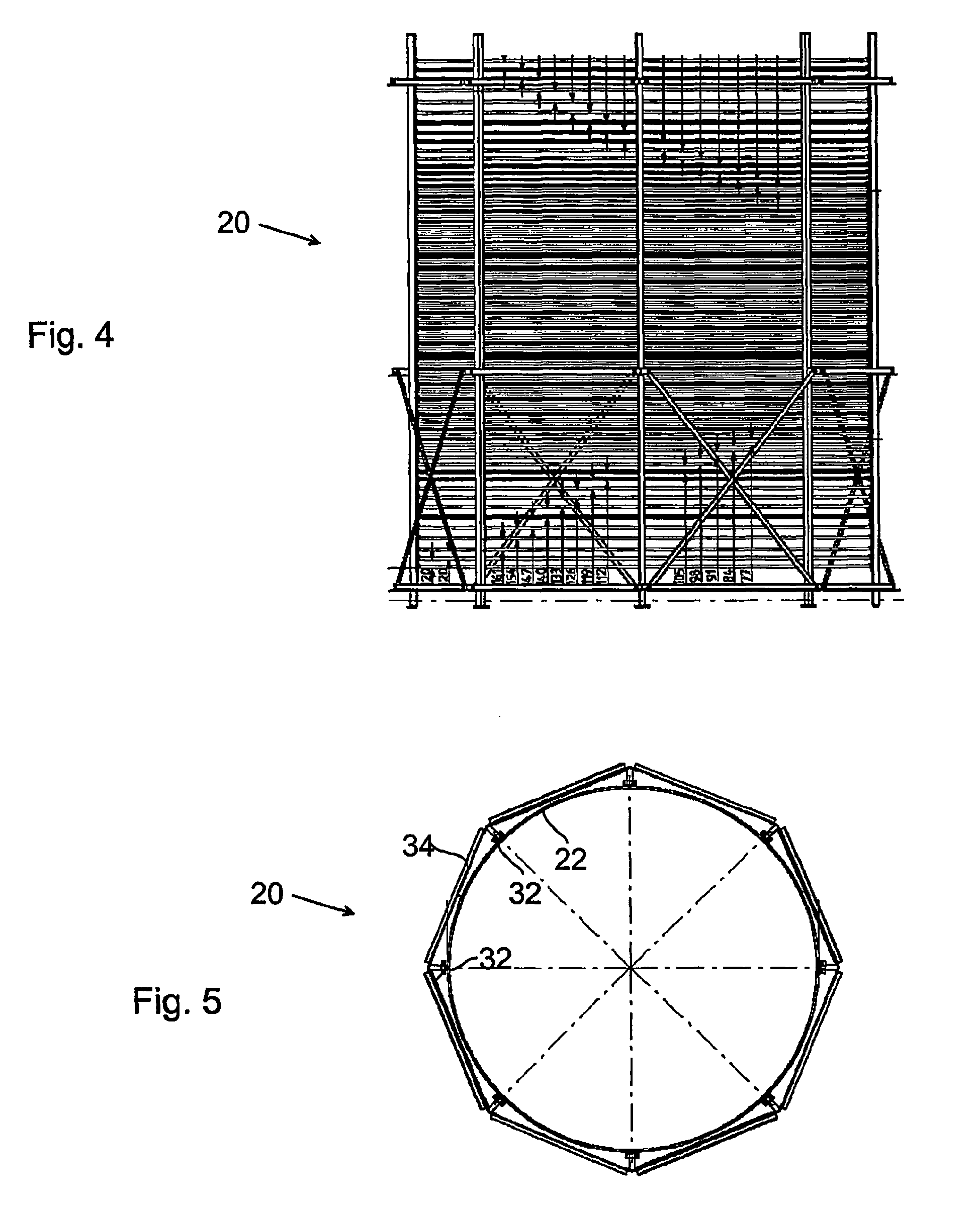 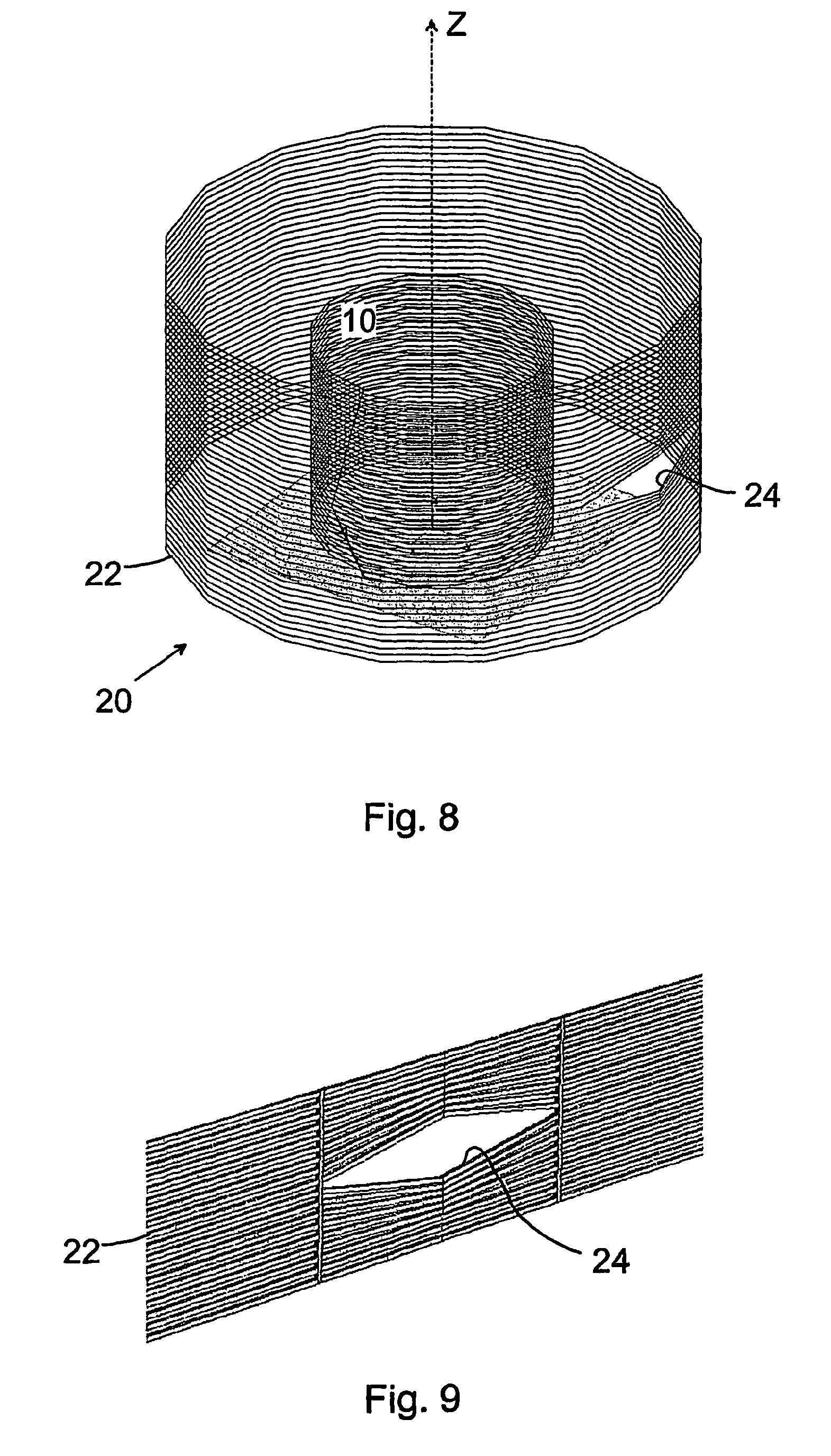