[0002] Automatic analyzers in general pipette a sample such as blood, urine, cerebrospinal fluid, etc. from a test tube or a certain vessel for that purpose to a reaction vessel, mix the sample with a reagent to cause a reaction between the sample and reagent, and measure components contained in the sample by use of measurement means such as a photometer.
[0003] During sample pipetting, the nozzle of the pipetting device is inserted into the sample in the test tube or dedicated vessel, and the syringe is driven to pipette a particular amount of the sample, which amount is predetermined and stored in a calculation unit on a measurement-item-by-item basis.
[0004] Pipetting devices of recent automatic analyzers commonly detect the liquid surface of a sample by capacitance variation, stops the lowering operation of the nozzle immediately after it is inserted into the liquid surface, and sucks the sample. Since a biological sample having viscosity is commonly used as a sample, handling or storing it in the wrong way may cause air bubbles on its liquid surface. These air bubbles may cause incorrect detection of the liquid surface.
[0005] In this case, air may be sucked together with the sample, and an expected amount of the sample may not be sucked.
[0006] If the sample is measured while the expected amount of the sample cannot be sucked because of incorrect detection of the liquid surface, correct measurement results may not be obtained. As means for avoiding this, a technique disclosed in patent literature, JP-A-10-227799, provides two pressure sensors at different positions (one in the vicinity of the nozzle and the other in the vicinity of a pump) to detect sucked air based on the difference in pressure fluctuation between the two positions. US5723795 A describes an automated analyzer with a pipetting station where suction is achieved by a syringe. The pressure variations during the aspiration period are used to detect the incorrect aspiration of air bubbles.

[0007] With the technique described in the patent literature, providing two pressure sensors at different positions increases the manufacture costs and the size of the pipetting device. Also, for pressure measurement, the technique uses an averaged, large time constant in order to eliminate noise. If the amount of sample liquid to be pipetted is several tens of microliters, which is the pipetting amount of the automatic analyzer according to the present invention, pressure fluctuation cannot be correctly detected.
[0008] An object of the present invention is thus to provide an automatic analyzer which includes means for correctly detecting whether or not air is sucked even when a minute amount (several microliters) of sample liquid is to be pipetted.
[0009] In order to attain the above-mentioned object, the present invention is configured as defined in the appended claims.
[0010] The present invention makes it possible to detect a minute amount of air bubbles during suction operation, inform an operator of whether or not an air bubble is present inside the pipe, and improve the reliability of results of measurement performed with a minute amount of sample liquid.

Fig. 1 is a schematic diagram of an automatic multipurpose analyzer.

Fig. 2 is a block diagram of a pressure detection system.

[0012] Fig. 1 is a schematic diagram of an automatic analyzer which incorporates a pipetting device according to an embodiment of the present invention.
[0013] The automatic analyzer shown in Fig. 1 is composed mainly of a reagent disk 1, a reagent pipetting mechanism 2, a reaction disk 3, a sample pipetting mechanism 4, a photometer 5, a sample disk 6, an ultrasonic mixing unit 7, a mechanism drive unit 8, an ultrasonic wave generator drive unit 9, a control unit 10, a storage device 11, an input unit 12, and a display unit 13.
[0014] The reagent disk 1 circumferentially installs therein vessels each containing a reagent to be mixed with a sample for reaction and circumferentially moves to an intended position by means of the control unit 10 and the mechanism drive unit 8. The reagent pipetting mechanism 2 pipettes a reagent from a reagent vessel installed on the reagent disk 1 and discharges it into the reaction disk 3. The reagent pipetting mechanism 2 is composed of a nozzle for suctioning a reagent, a motor or the like for horizontally moving the nozzle, and another motor or the like for vertically moving the nozzle. The sample disk 6 installs thereon samples each contained in a vessel such as a test tube, circumferentially rotates, and is circumferentially moved by the control unit 10 and the mechanism drive unit 8. The sample pipetting mechanism 4 pipettes a sample and discharges that sample into the reaction disk 3. The reaction disk 3 is circumferentially rotated to a predetermined position by a motor driven by the mechanism drive unit 8 and the control unit 10. The ultrasonic mixing unit 7 mixes the sample and reagent. The photometer 5 measures components of the sample. The storage device 11 stores information necessary for drive system control and information necessary for analysis and exchanges information with a computer (not shown). The input unit 12 is used by an operator to input parameters or the like and typically represented by an input device such as a keyboard. The display unit 13 displays various screens such as analysis items, analysis results, and the like.
[0015] An embodiment of the present invention will be described below with reference to Fig. 2.
[0016] Reference numeral 201 denotes a test tube which contains a sample. The pipetting device according to this embodiment is composed mainly of a nozzle 202, a pipe 203, a pressure sensor 204, an amplifier 205, an analog-to-digital converter 206, a CPU 207, a motor controller 208, a motor driver 209, a motor 210, a plunger 211, and a syringe 212. The motor 210 moves the plunger 211 up and down, controlled by the motor controller 208 and the motor driver 209 based on a command from the CPU 207. The up-and-down motion of the plunger 211 causes the nozzle 202 to suction the sample in the test tube 201. The pressure sensor 204 converts a pressure fluctuation inside the pipe 203 to an analog signal, which is amplified by the amplifier 205. The amplified analog signal is input to the analog-to-digital converter 206, where it is converted into a digital signal. The digital signal is then subjected to storage and arithmetic processing at the CPU 207.
[0017] A concrete method for detecting sucked air upon suction of a sample will be explained below with reference to Fig. 3.
[0018] Fig. 3 is a graph showing pressure fluctuation when the sample is suctioned.
[0019] The operation of the syringe and pressure fluctuation will be now explained. During suction operation, the pressure inside the pipe becomes negative. After the syringe stops to operate, the pressure will then return to zero. At this time, however, the motor driving the syringe reversely rotates for backlash correction and then stops. Although this operation lasts for about 100 milliseconds, the movement of the sample cannot respond to the sudden operation of the syringe during the backlash correction because of the viscosity of the sample inside the pipe, thus showing large overshoot and undershoot of the pressure value. When air bubbles are present inside the pipe, the pressure inside the pipe during the backlash fluctuates differently from that during normal suction because of the cushioning effects of the air bubbles. In the present invention, pressure fluctuations are sampled at fixed time intervals and subjected to arithmetic processing, using as a trigger the event (or a sign temporally close to that event) of the reverse motor rotation for the backlash correction, thereby discriminating normal suction from suction of air bubbles.
[0020] Specifically, the sampling period is 10 to 40 milliseconds, and in the arithmetic processing, a threshold value having a fixed margin is determined with reference to an integration value for normal suction in order to detect suction of air bubbles.
[0021] When the suction of air bubbles is detected, the operator can be notified of the detection with an alarm or by adding a comment or symbol to the measurement result.

a nozzle (202) for suctioning a sample liquid;

pressure measurement means (204) for measuring the pressure inside the pipe (203);

storage means for storing a pressure fluctuation for each amount of sample liquid suctioned;

calculation means (207) for performing a comparing process or an arithmetic process to the pressure fluctuation stored in the storage means; and

characterized in that the detection means is adapted to use, as a trigger to start the predetermined period of sampling time in the detection of a syringe operation during the normal suctioning operation of the nozzle (202), the event of reverse motor rotation for correcting the jolting motion of a gear of a drive source (208-210) of the syringe (212).

2. The automatic analyzer of claim 1, wherein the predetermined period of sampling time is 10 to 40 milliseconds.
3. The automatic analyzer of claim 1 or 2, wherein the calculation means (207) is adapted to perform arithmetic processing in which a threshold value having a fixed margin is determined with reference to an integration value for normal suction in order to detect suction of air bubbles. 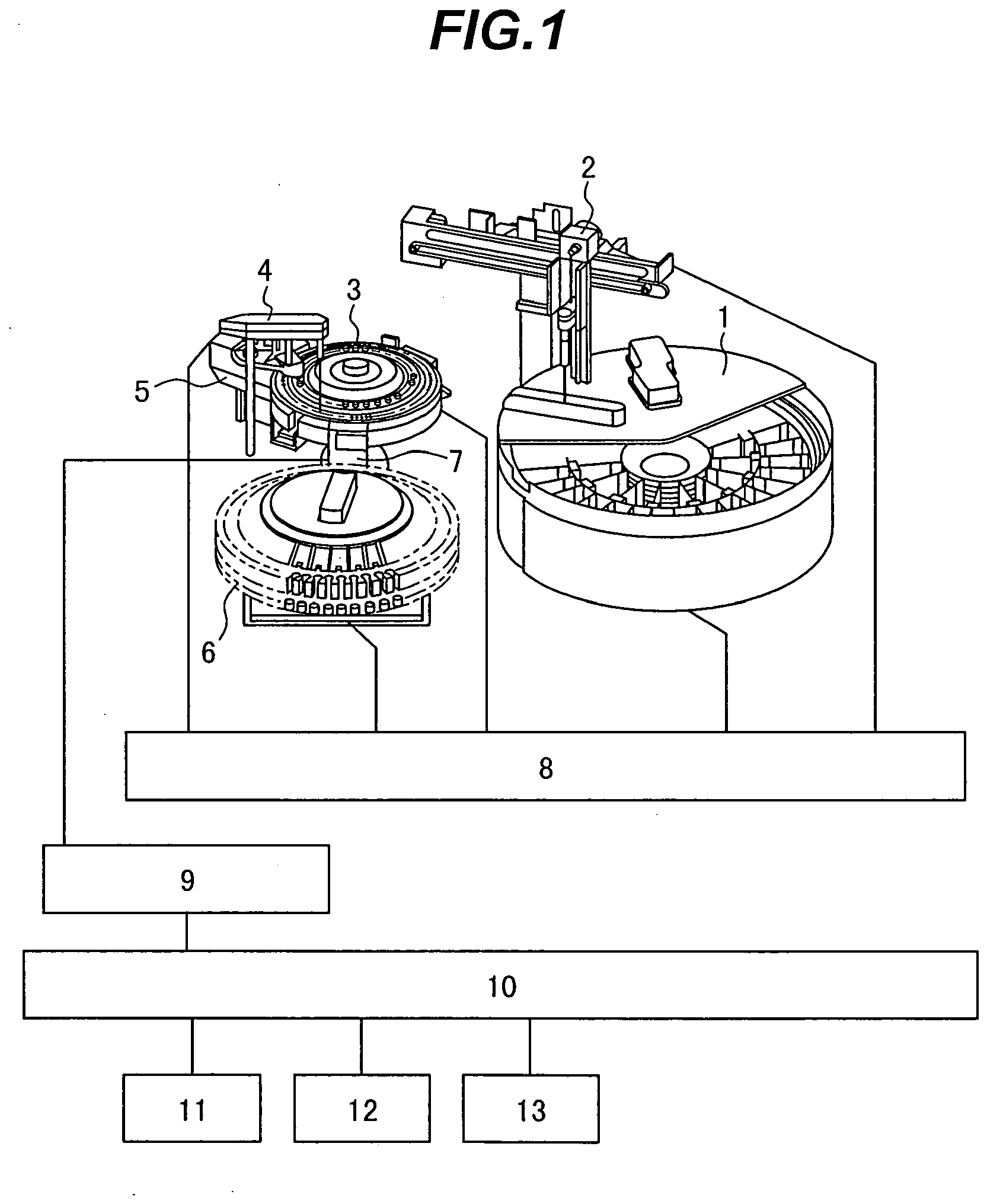 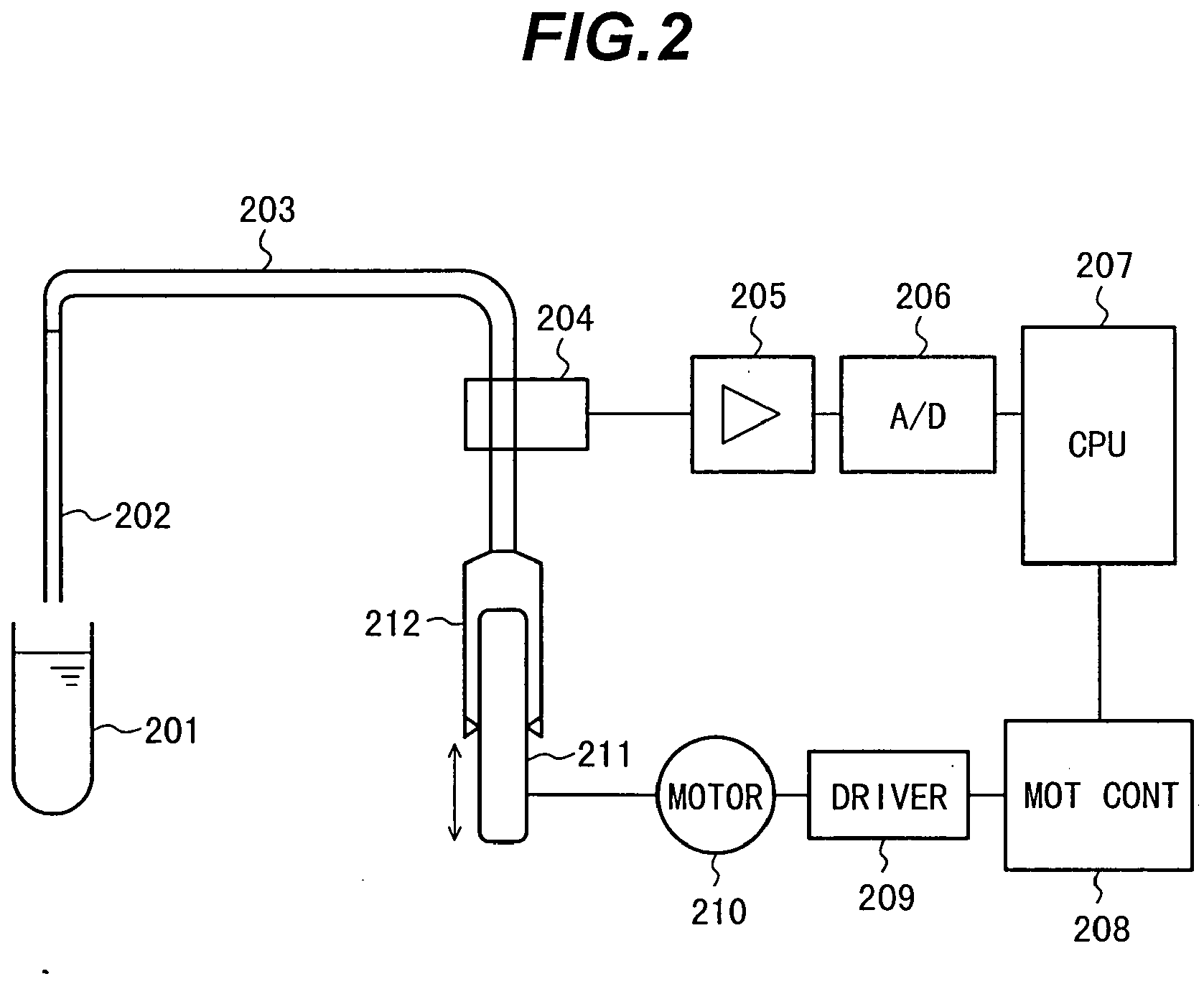 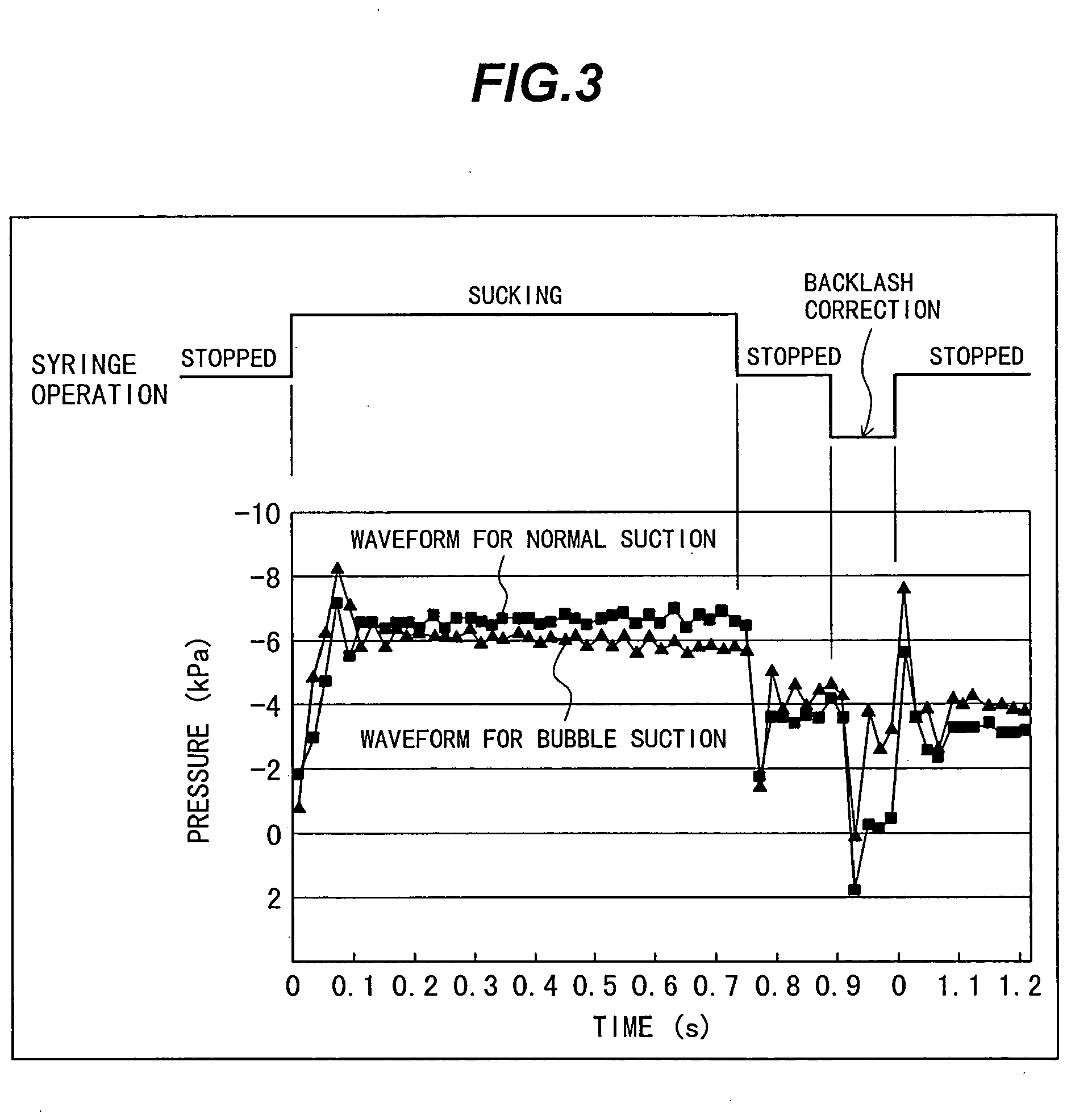