[0001] The present invention relates to a material composition, comprising on the one hand a particulate or granular material and, on the other hand, a binder which is disposed as a coating on the particles or the grains, the binder comprising a hydroxyl-terminated polymer cross-linked by a boron compound, characterized in that the concentration of the particulate or granular material is 90-98vol.% of the finished composition.
[0002] The present invention also relates to a method of producing a material composition as mentioned above, comprising the steps that a quantity of particles or grains is placed in a mixer; that at least one first ingredient included in the binder comprising a hydroxy-terminated polymer of low viscosity is supplied to the mixer; and that a second ingredient in the form of a cross-linking agent containing boron is supplied to the mixer.

[0003] Numerous model clays or similar kneadable materials are previously known in the art and are employed both for artistic purposes and also by children at play. It is a known fact that many of these materials require a certain working and gentle heating in order to obtain the desired plasticity and mouldability.
[0004] In order to be able to use the mouldable or formable matrix so as to make figures in moulds, it is necessary that the matrix releases or slips readily from the materials from which the moulds are made. The adhesive capacity of matrix or composition to its surroundings must therefore be limited, which also entails the effect that the matrix is, at the same time, perceived as less tacky and easy to handle.
[0005] Another problem which is relevant when the clay or the composition is handled by small children, in particular in the event of repeated use, is that bacteria and other contaminants may grow in the handled composition, which is unsuitable not least when the composition is handled in large children's groups, such as in the child care services. At the same time, the consistency of the modelling clay or the composition is reduced in that liquid, for example in the form of sweat or saliva, is absorbed by the composition.
[0006] One example of a material known in the art is so-called trick dough which consists mostly of flour, water and salt. Another similar material which includes further additives is marketed under the trademark Play-Doh®. These materials dry out when the water evaporates during use. In addition, the material does not slip or release from deep moulds of plastic or similar materials.
[0007] In order to obtain an interesting structure which is readily mouldable, it is possible to cause a relatively large proportion of particles to be included in the material which will then have a granular structure which, for example, may be likened to wet sand. Moreover, the total volume of the kneadable material increases at the same time, at least by the volume of the particles included.
[0008] One example of a prior art material which satisfies the above-outlined criteria at least as regards workability, reasonably low tackiness and the desired granular structure as a result of the particles included is the Applicant's own Application under serial number SE 0500663-0. However, this material has, in addition, specific properties in that it may be baked in an oven in order to produce hard figures that are moreover water-resistant. If a soft material is once again desired, the hard figures are heated up, whereafter the composition must be kneaded during cooling in order to become soft at room temperature. This latter working takes up a not inconsiderable amount of time and effort, which could be a drawback in certain circumstances, for example in the child care services where there is occasionally a shortage of personnel. A certain adhesion of the binder of the material occurs to normal plastics which are included in moulds and equipment, which may also be perceived as a drawback.
[0009] Another prior art material is described in USPS 5,607,993 which discloses a so-called "bounce clay". In working, this material lacks a manifest particulate structure, nor is it immediately intended for figure moulding, but rather for use where its bouncing properties are appreciated. The bouncing clay contains a small proportion of particles which merely function as a filler with a view to imparting lower density to the bouncing clay. The particles are extremely small and are completely surrounded by the silicone material and their granular structure cannot therefore be sensed on handling of the composition. The "bouncing clay" is available in many different variations, and the chemical compositions are well-known as well as their effects on the properties of the material.
[0010] GB 2 327 086 A discloses a modeling dough compositionen comprising a polar polymeric resin, water, a gellant and a filler, wherein the filler accounts for a large portion of the volume of the dough, resulting in that the overall volume is not greatly affected by water loss upon drying.
[0011] WO 98/41408 Aldiscloses a sand material mixture comprising sand or sand-like material and a binding agent, which is solid at room temperature but still exhibiting a tackiness matching the tackiness of beeswax. The grains of sand or sand-like material have a coating of the binding agent.
[0012] US 5 711 795 A discloses a compressible and moldable toy sand composition, the particles being coated with a thin coating of a waxy diner, which preferably is a paraffin was.
[0013] EP 0 528 602 A1 refers to a method of improving the storage stability of a colored organic pigment In powder form, which is achieved by boating the pigment particles with a solid polymer, which is a polar group.
[0014] US 5 258 437 A discloses a silicone putty composition having a high impact resilience immediately after preparation and providing a soft silicone putty having low plasticity, which composition is suited for use in toys and dampers.
[0015] US 5 873 933 A discloses an amorphous play material having an unusual tactile characteristic which is obtained by combining a malleable play material binder with a substantially greater quantity of sand.

[0016] There is hence a need in the art to realise a composition principally for play and educational purposes where the property that the composition is readily mouldable and formable is combined with a low level of adhesion to its surroundings and an attractive and pleasant structure, but which is different from the materials already existing in the art.

[0017] The objects forming the basis of the present invention will be attained if the material composition intimated by way of introduction is characterised in that the concentration of the particulate or granular material is 90-98 vol % of the finished composition.
[0018] Regarding the method for producing the material composition, the object of the present invention will be attained if the first ingredient included in the binder is distributed as thin layers on the surfaces of the particles or grains, and that thereafter the cross-linking agent in dissolved form is supplied to the mixer for cross-linking the thin layers of the first ingredient.
[0019] Further advantages will be attained if the present invention is moreover given one or more of the characterising features as set forth in appended Claims 2 to 6 and 8 to 11.

BRIEF DESCRIPTION OF THE ACCOMPANYING DRAWINGS

[0054] In the practical application according to the preferred embodiment, sand is the material that functions well as the particulate base. This is in all likelihood because of its surface structure which is not absolutely smooth seen on a microscopic scale. The binder 3 in the hydroxy-terminated polymer that reacts with the cross-linking agent adheres quite well to this substrate despite the limited adhesive power of the binder 3. If particles 2 of a smoother surface structure such as, for example, ceramic materials are employed, the particles or grains 2 included must be surface modified. This is suitably put into effect with an introductory silicone rubber coating which amounts to about 0.02µm. This surface modification also enjoys the advantage that it entails a reduction of the requirement of added binder in order to realise a material composition 1 possessing the desired properties.
[0055] The surface modification has been put into effect in the practical trials on different types of particles with the aid of Wacker fluid L655, which is an aminine-containing low molecular silicone oil which sets on contact with oxygen (air). The surface modification is suitably supplied via the aqueous phase in order to achieve the desired distribution in a thin layer on all particles which are to be treated before the setting begins.
[0056] Other substances that may be employed for surface modification are two- or three component silicone rubber or organohalosilanes, such as dimethyl dichlorosilane, (CH3)2SiCl2.
[0057] Yet another method of modifying the present invention is that boric acid need not necessarily be dissolved in water in step 8 in the production method. Instead, it is conceivable that the boric acid is dissolved in ethanol, which is more fugitive, and which probably results in a more rapid reaction between the cross-linking agent and the hydroxy-terminated polymer in step 9. However, the use of ethanol involves a fire hazard and may have undesirable environmental consequences.
[0058] The cross-linking agent (the boric acid) and the hydroxy-terminated polymer may be added to the particles in the reverse sequence compared with that described in the preferred embodiment. Nevertheless, the major principle remains that the substances be distributed uniformly out on the particles 2 while they are in the low-viscous state. The modification which needs to be made of the method is that the heating takes place only after the addition of the hydroxy-terminated polymer, i.e. only after both of the major ingredients have been added and uniformly spread on the particles 2.
[0059] Finally, other binders 3 possessing corresponding viscosity and adhesive properties may be employed in the present invention and the production method is, in such instance, substantially the same. For complete information on such binders 3 as have been tested in practical trials, reference is made to Table 1. The present invention may further be modified without departing from the scope of the appended Claims.

1. A material composition, comprising on the one hand a particulate or granular material (2) and, on the other hand, a binder (3) which is disposed as a coating on the particles or grains (2), the binder comprising a hydroxyl-terminated polymer cross-linked by a boron compound, characterised in that the concentration of the particulate or granular material (2) is 90-98vol% of the finished composition.

2. The material composition as claimed in Claim 1, characterised in that the hydroxy-terminated polymer is a silicone oil.

3. The material composition as claimed in Claim 1 or 2, characterised in that the particles or grains (2) are coated with a surface-modifying agent under the coating of the binder (3).

4. The material composition as claimed in Claim 3, characterised in that the surface-modifying agent realises a layer of solid silicone.

5. The material composition as claimed in any of Claims 1 to 4, characterised in that the mean particle size of the particulate or granular material is 0.05-0.5 mm.

6. The material composition as claimed in Claim 5, characterised in that the mean particle size of the particulate or granular material is 0.07-0.15 mm.

8. The method as claimed in Claim 7, characterised by the step that the temperature of the composition is raised.

9. The method as claimed in Claim 7 or 8, characterised in that the particles (2) are first surface-modified in order to improve their adhesion to the binder (3).

10. The method as claimed in any of Claims 7 to 9, characterised in that a kneading and de-airing take place after the second ingredient has been supplied.

11. The method as claimed in any of Claims 7 to 10, characterised in that the first ingredient is a hydroxy-terminated silicone oil. 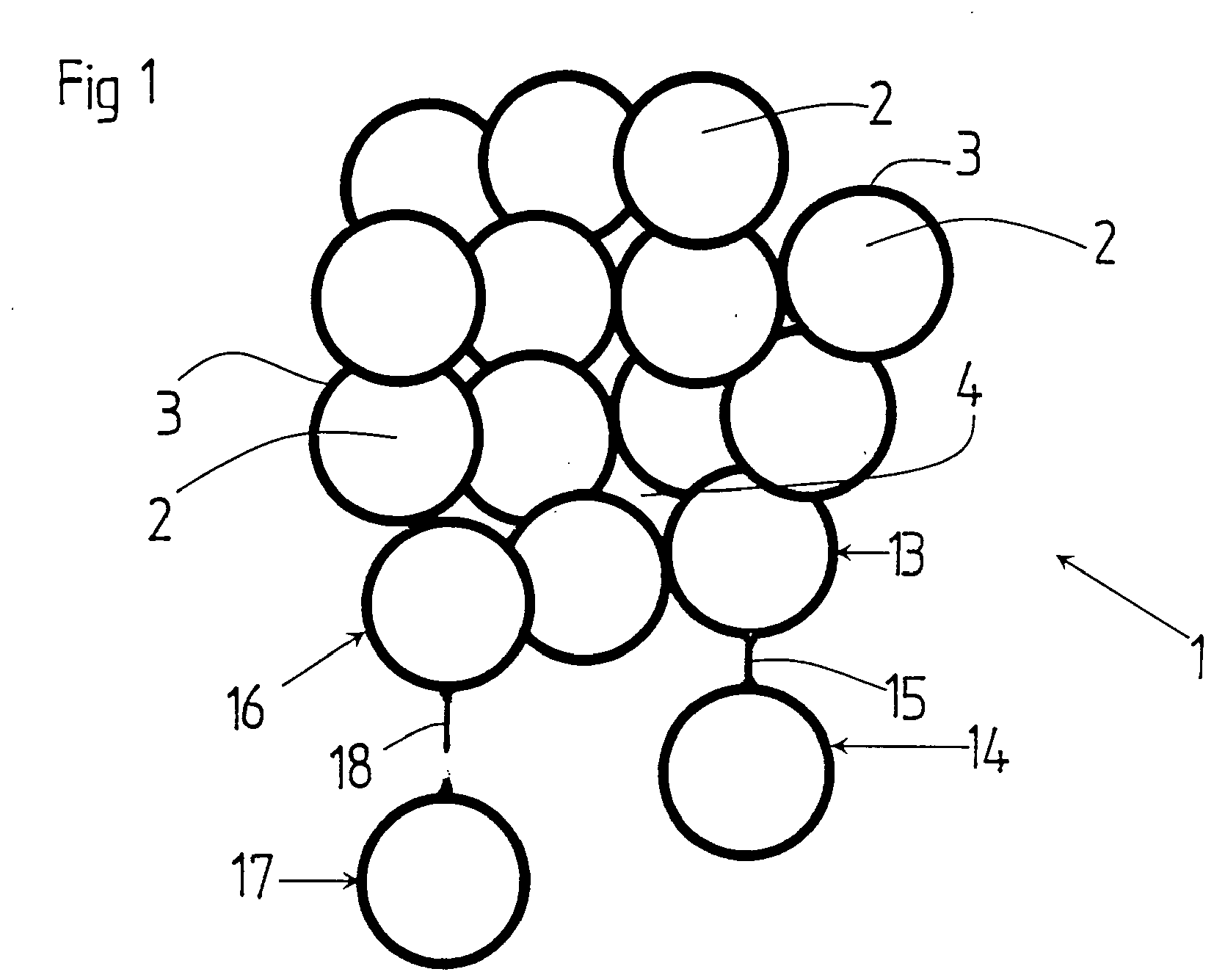 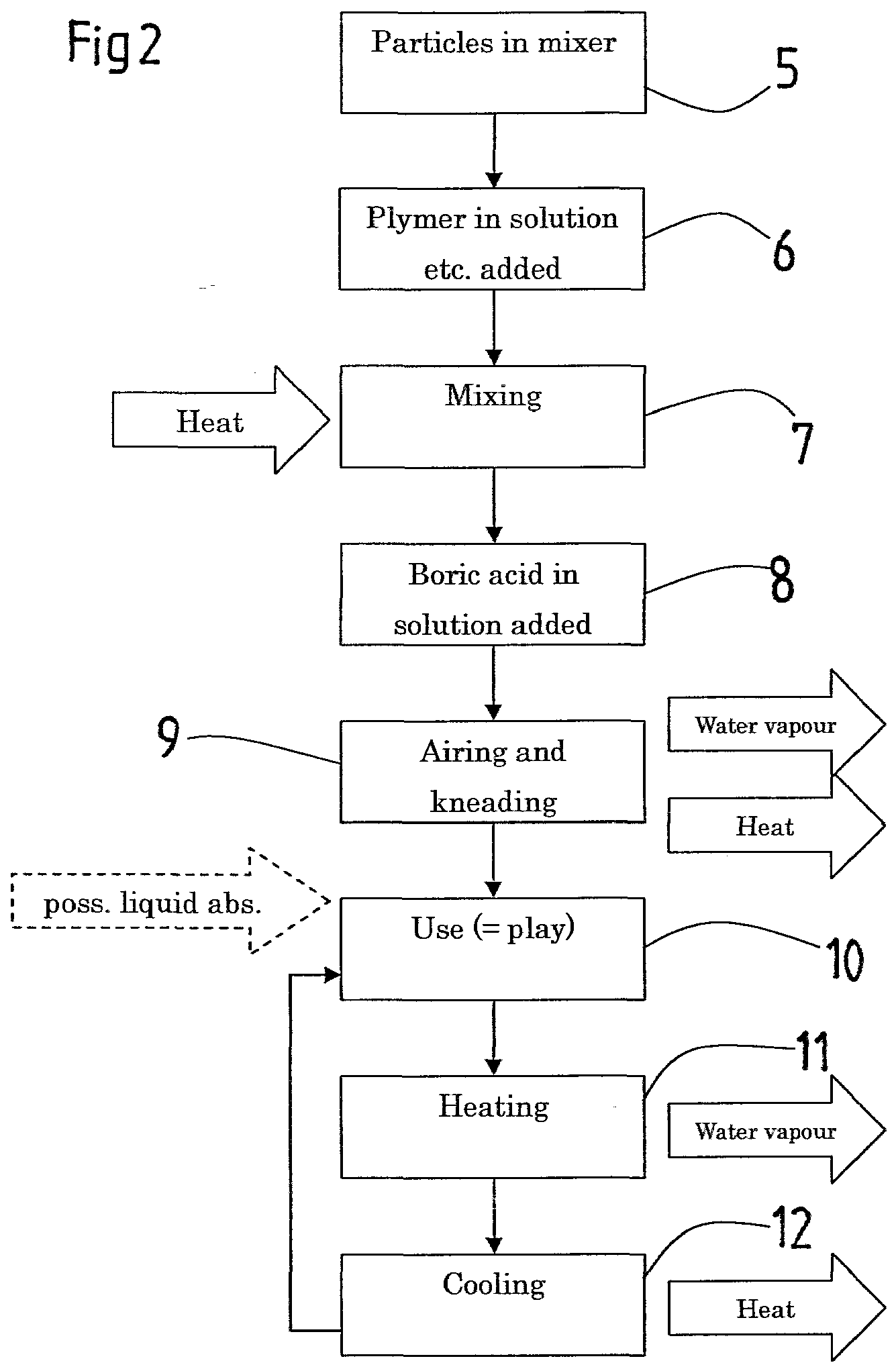