[0002] Single crystal silicon carbide (SiC) has proven to be a very useful material in the manufacture of various electronic devices. Due to its physical strength and excellent resistance to many chemicals, SiC may be used to fabricate very robust substrates adapted for use in the semiconductor industry. SiC has excellent electrical properties, including radiation hardness, high breakdown field, a relatively wide band gap, high saturated electron drift velocity, high-temperature operation, and absorption and emission of high-energy photons in the blue, violet, and ultraviolet regions of the optical spectrum.
[0003] SiC is conventionally produced using various seeded sublimation growth processes. Selected seeded sublimation growth processes are disclosed, for example, in U.S. Patents 4,912,064, 4,866,005 (U.S. Reissue 34,861), and 5,679,153.
[0004] In a typical SiC growth process, a seed material and source material are arranged in a reaction crucible which is then heated to the sublimation temperature of the source material. By controlled heating of the environment surrounding the reaction crucible, a thermal gradient is developed between the sublimating source material and the marginally cooler seed material. By means of the thermal gradient source material in a vapor phase is transported onto the seed material where it condenses to grow a bulk crystalline boule. This type of crystalline growth process is commonly referred to as physical vapor transport (PVT) process.
[0005] In conventional SiC growth processes, the reaction crucible is made of carbon (including, for example graphite and/or other carbon materials) and is heated using an inductive or resistive heating technique. The heating coils and associated insulation are carefully positioned in relation to the reaction crucible to establish and maintain the desired thermal gradient. Source material, such as powdered SiC, is commonly used in conjunction with vertically oriented reaction crucibles. The powdered SiC is retained in a lower portion of the reaction crucible and the seed material is positioned in an upper portion of the reaction crucible during the PVT process.
[0006] The unique properties of SiC substrates enable the design and fabrication of an array of high power and/or high frequency semiconductor devices. Continuous development over the past decade has lead to a level of maturity in the fabrication of SiC wafers that allows such semiconductor devices to be manufactured at commercially acceptable price points. However, certain materials-related problems continue to impede the broader use of SiC wafers as the substrate of choice in many commercial applications. These materials-related problems are largely the result of certain structural defects in the material composition of conventionally manufactured SiC, such as micropipes, dislocations (e.g., threading, edge, basal plane, and/or screw dislocations), hexagonal voids, stacking faults, etc. Each of these structural defects is caused by one or more discontinuities in the material lattice structure of the constituent SiC. Such structural defects are detrimental to fabrication and proper operation of semiconductor devices subsequently formed on the SiC substrate. Device yield and reliability suffer accordingly.
[0007] The nature and description of structural defects in SiC are well understood, and although the density of such defects has been reduced over time, relatively high defect concentrations still appear and have proven difficult to eliminate. (See, for example, Nakamura et al., "Ultrahigh quality silicon carbide single crystals," Nature, Vol. 430 at page 1009, (August 26, 2004)).
[0008] Micropipes are common structural defects in SiC that develop or propagate during seeded sublimation growth processes. A micropipe is a hollow core, super-screw dislocation with its Burgers vector typically lying along the c-axis. A number of causes have been attributed to the generation of micropipes in SiC. These include inclusions of excess materials such as silicon or carbon inclusions, extrinsic impurities such as metal deposits, boundary defects, and the movement or slippage of partial dislocations. (See, e.g., Powell et al., Growth of low micropipe density SiC wafers," Materials Science Forum, Vols. 338-40, pp. 437-40 (2000)).
[0009] Other evidence suggests that micropipes are associated with hexagonal voids. Hexagonal voids are flat, hexagonal platelet-shaped cavities in the crystal that often have hollow tubes trailing beneath them. (See, e.g., Kuhr et al., "Hexagonal voids and the formation of micropipes during SiC sublimation growth," Journal of Applied Physics, Vol. 89, No. 8 at page 4625 (April 2001)).
[0010] With continuing efforts to commercialize SiC substrates and devices formed on SiC substrates, an increased emphasis has been placed on the quality of the constituent substrate material. For example, the so-called repeated a-face (RAF) growth approach has demonstrated micropipe-free SiC samples. However, this process can not be adapted for use in commercial applications due to its long process cycle time, complicated processing, difficulties in wafer diameter expansion and corresponding expense. Thus, while the industry has been able to steadily decrease the density of micropipes in commercial SiC substrates over time, there is a need for a SiC wafer growth process that is commercially viable and that provides single crystal SiC which is entirely free of micropipes.

Figure (FIG.) 1 is a schematic cross-sectional view of a seeded sublimation system in accordance with an embodiment of the present invention;

FIGS. 2(a) and 2(b) are photographic images respectively showing an etched surface of a 6H-SiC crystal (initial stage of growth), and distribution of polytype inclusions in 6H-SiC boule (bulk growth stage);

FIG. 3 is an image showing micropipe formation at 6H - 15R polytype boundaries; and

FIG. 5 is a photograph showing a 100 mm diameter micropipe-free 4H - SiC wafer and fabricated in accordance with an embodiment of the invention.

1. A method of growing a single-crystal (26) of silicon carbide, SiC, in the nominal c-axis growth direction using a physical vapor transport, PVT, process in a sublimation system (12), wherein the crystal is completely free of micropipe defects, the method comprising:

controlling the temperature gradient to be in a range of from 50 to 150 deg C/cm; and

backfilling the sublimation system using at least one inert gas;

heating the sublimation system to a temperature facilitating SiC crystal growth; and

reducing the pressure on the reaction crucible within the sublimation system to initiate SiC crystal growth.

a silicon carbide, SiC, substrate sliced from a crystal having a minimum diameter of 100 mm, the SiC substrate having opposing first and second surfaces; and

an epitaxial layer on at least the first surface of the SiC substrate and having a concentration of n-type or p-type dopant atoms defining a conductivity type for the epitaxial layer;

a gate dielectric layer on the channel region; and

a metal gate structure on the gate dielectric layer over the channel region. 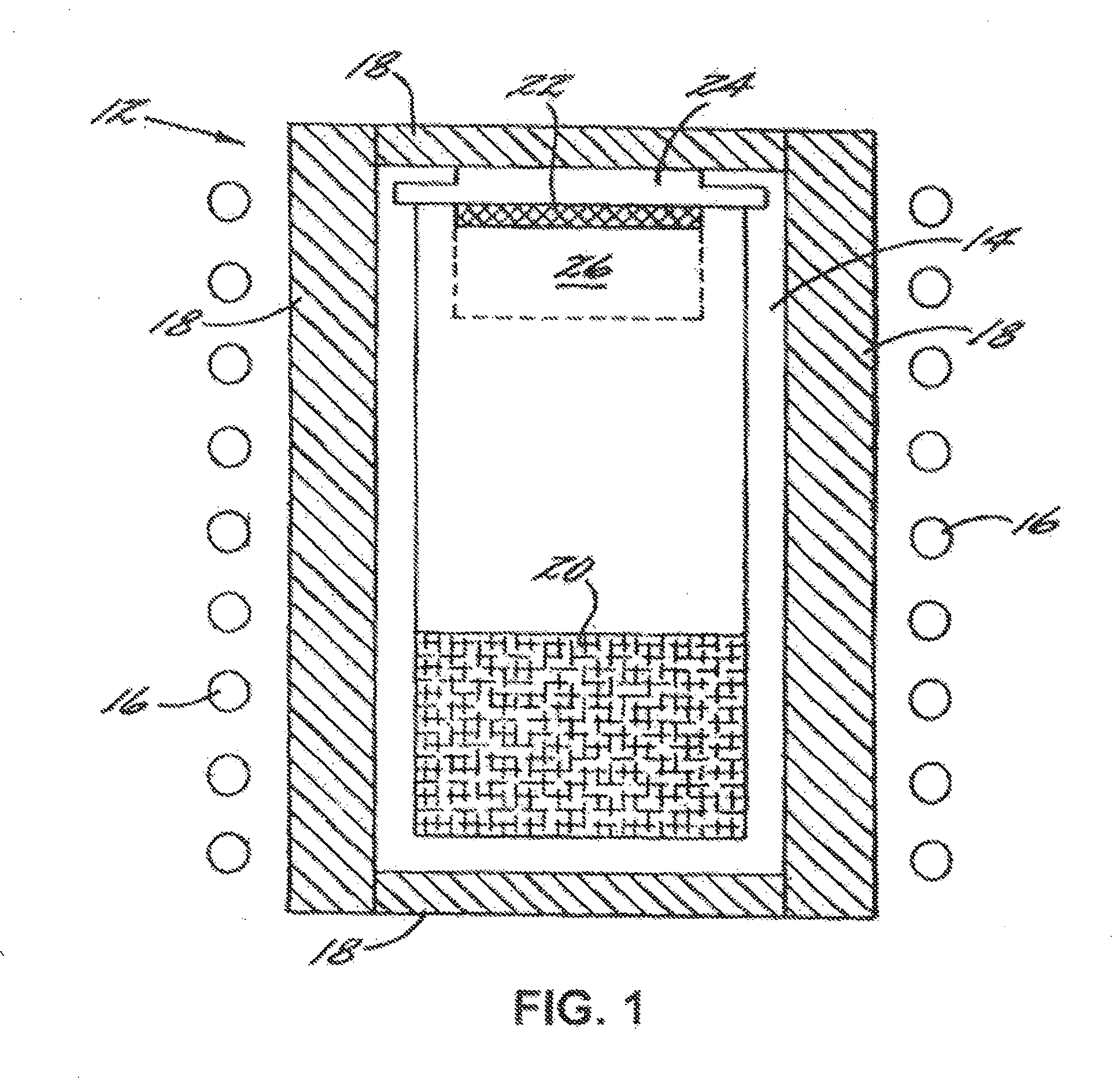 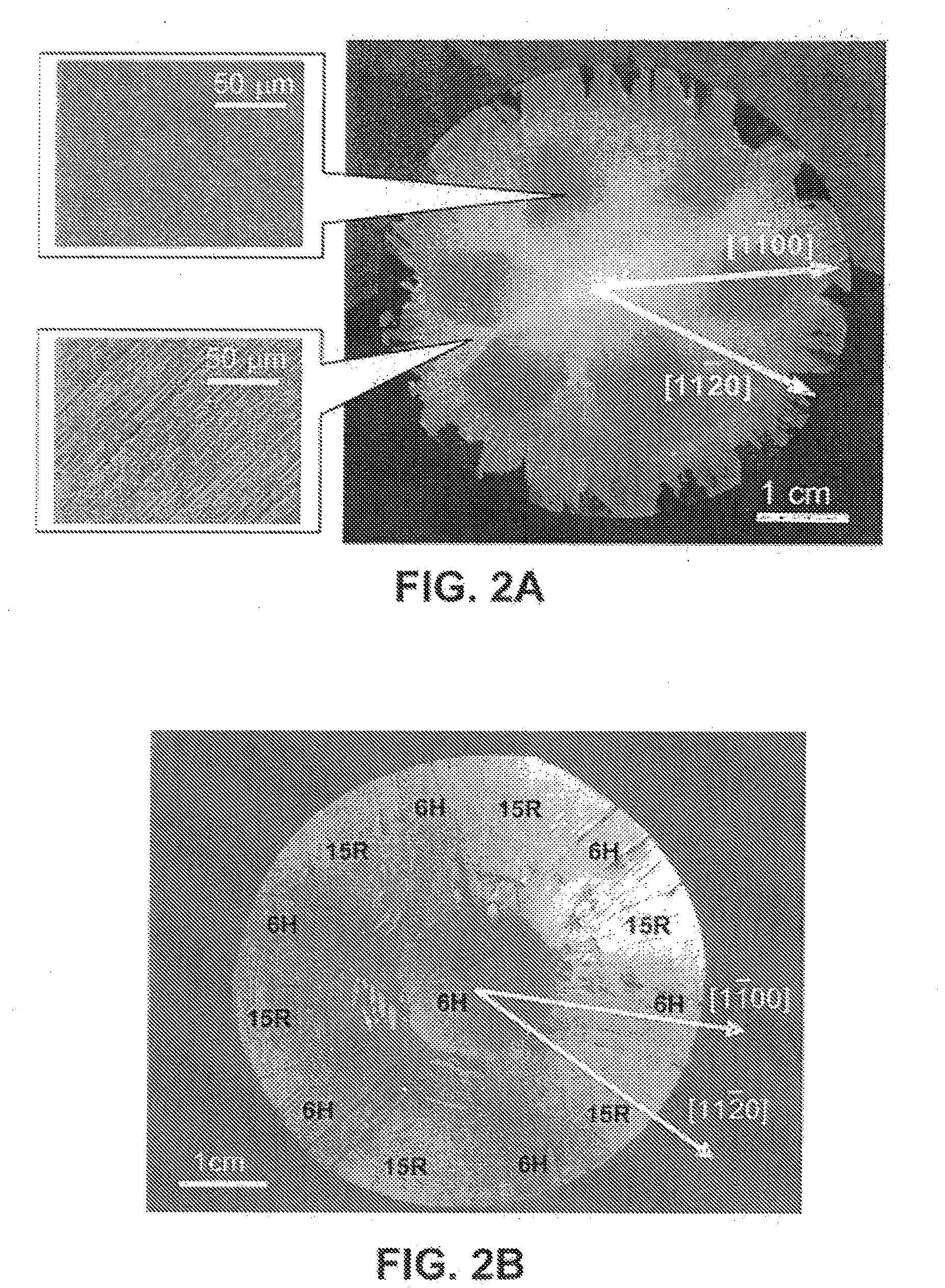 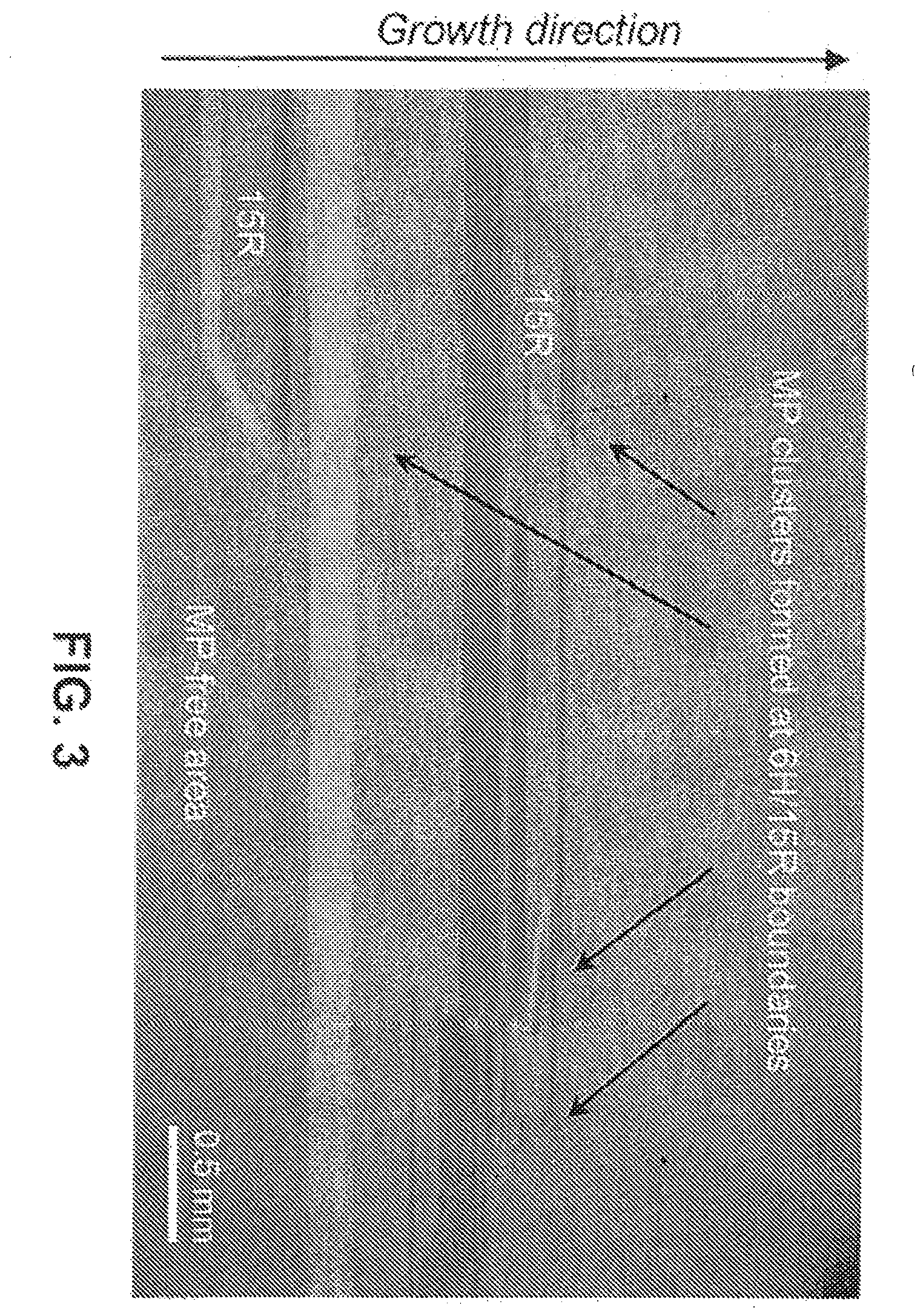