[0002] The development of various voice over IP protocols such as the H.323 Recommendation and the Session Initiation Protocol (SIP) has led to increased interest in multimedia conferencing. In such conferencing, typically, a more or less central server or other device manages the conference and maintains the various communications paths to computers or other client devices being used by parties to participate in the conference. Parties to the conference may be able to communicate via voice and/or video through the server and their client devices.
[0003] Instant messaging can provide an added dimension to multimedia conferences. In addition to allowing text chatting, instant messaging systems such as the Microsoft Windows Messenger™ system can allow for transfer of files, document sharing and collaboration, collaborative whiteboarding, and even voice and video. A complete multimedia conference can involve multiple voice and video streams, the transfer of files, marking-up of documents, and whiteboarding.
[0004] Presence-based communications applications are entering the mainstream telecommunications environment. In such applications, a user maintains one or more "contact lists" of other parties whose presence status is to be monitored and displayed to the user. When a contact's presence information indicates the contact is available, the user can then contact them. The user can then contact the other party for example via a telephone call.
[0005] In computer and telecommunications networks, presence information conveys availability and willingness of a user (called a presentity) to communicate. A user's client provides presence information to a presence service to be stored and distributed to other users (called watchers) to convey its communication state. Presence information has wide application in voice over IP (VoIP) and instant messaging (IM).
[0006] A user client may publish a presence state to indicate its current communication status. This published state informs others that wish to contact the user of the user's availability and willingness to communicate. The most common use of presence today is the status indicator displayed on most instant messaging clients. A simpler everyday example is the 'on-hook' or 'off-hook' state of a telephone receiver, resulting in a distinctive ring tone (e.g., a busy signal) for a caller. Some states that offer extended information on the user's availability are "free for chat", "away", "do not disturb", and "out to lunch", which are often seen on many modern instant messaging clients. Rich information such as user mood and location may be also included. Presence is different from traditional 'on-hook' telephone status in that it deals with the user not the device (you want to talk to a person, not to a telephone).
[0007] EP 1 531 635 A1 discloses a method in an Internet Protocol (IP) telecommunications network of establishing a conference call between a first user as a conference owner and a plurality of other users as conference participants, said network including a conference server and at least one Serving Call State Control Function (S-CSCF).
[0008] US 2004/0161080 A1 discloses a rules-based real-time messaging system for groups of users, in which an availability status may be maintained in association with each user. Clients are communicably coupled to a real-time messaging server, which maintains indications of the online/offline presence status of each user, as well as other user attributes.
[0009] US 2006/0067250 A1 discloses methods and apparatus, provided for establishing a conference based on the presence or preferences (or both) of one or more invitees. The presence of each invitee is evaluated on one or more devices. A media type is selected based on the presence information. User preference information may be evaluated for those invitees who are not currently present on a device. The selected media type for the conference may optionally be required to support the requirements of the conference, such as document sharing or video links. In this manner, the same communication application can trigger conferences of different media types (where the selected media type is most likely to lead to the successful establishment of the conference). In addition, the present invention allows a media type to be selected that will be more likely to lead to the successful establishment of a conference.
[0010] Currently, when a user initiates a conference for a pre-designated list of conference attendees, some of the attendees may not be available to receive voice calls. As a result attendees that the user thought were necessary for a productive meeting are not included and time is wasted.
[0011] Furthermore, even in presence based communication systems where a user can look at the availability of the potential conferees, to do so is time-consuming. Even using a Tell-Me-When feature that notifies the user when a particular person is available for communications, the user needs to set up the feature on many people potentially, and keep track of when all of them are available. Again, this is time-consuming.
[0012] Therefore, it is desirable to have a system that allows a presence based communication system user to initiate a conference automatically when the desired parties are available.

[0017] The numerous advantages of the present invention may be better understood by those skilled in the art by reference to the accompanying figures in which:

FIG. 1 illustrates a multi-modal presence system according to embodiments of the present invention;

FIG. 2 is a diagram of a conference system according to some embodiments of the present invention;

FIG. 3 is a diagram illustrating a conference collaboration system according to some embodiments of the present invention;

FIG. 4 is another diagram illustrating a conference collaboration system according to some embodiments of the present invention;

FIG. 5 is a diagram illustrating a graphical user interface according to some embodiments of the present invention;

FIG. 6 is a diagram illustrating another graphical user interface according to some embodiments of the present invention;

FIG.8 is a flow chart diagram showing implementation of an automatic conference initiation system in an embodiment of the present invention;

FIG. 9 is a block diagram of possible components that may be used in some embodiments of the server of FIG. 2 and FIG. 4.

(b) receives input designating a number of the conferees that must be available before the conference can begin (806);

(c) receives input designating required conferees (702C, 702G) that must be available before the conference can begin (808);

(e) obtains the presence information (704, 814) from a presence based telecommunications system (10) by means of presence services (12), including scheduling information, aggregated across various media;

(h) determines if the conference initiator (702A) selects

2. A method for automatic conference initiation (800), the method characterized by the steps of:

(c) receiving input on the predetermined number of conferees that must be present before the conference can begin (806);

(f) obtaining presence information (704, 814) from a presence based telecommunications system (10) by means of presence services (12), including scheduling information, aggregated across various media;

(i) determining if the conference initiator (702A) selects

3. The automatic conference initiator system (700) according to claim 1 or the method for automatic conference initiation (800) according to claim 2, characterized in that the presence information (704) of the conferees (702B, 702C, 702D, ..., 702H) is based on a plurality of the following presence states with the corresponding descriptions:
4. A machine readable medium comprising instructions that cause a processor to perform the method of claim 2 or 3.

(i) Feststellen, ob der Konferenzeinleiter (702A) 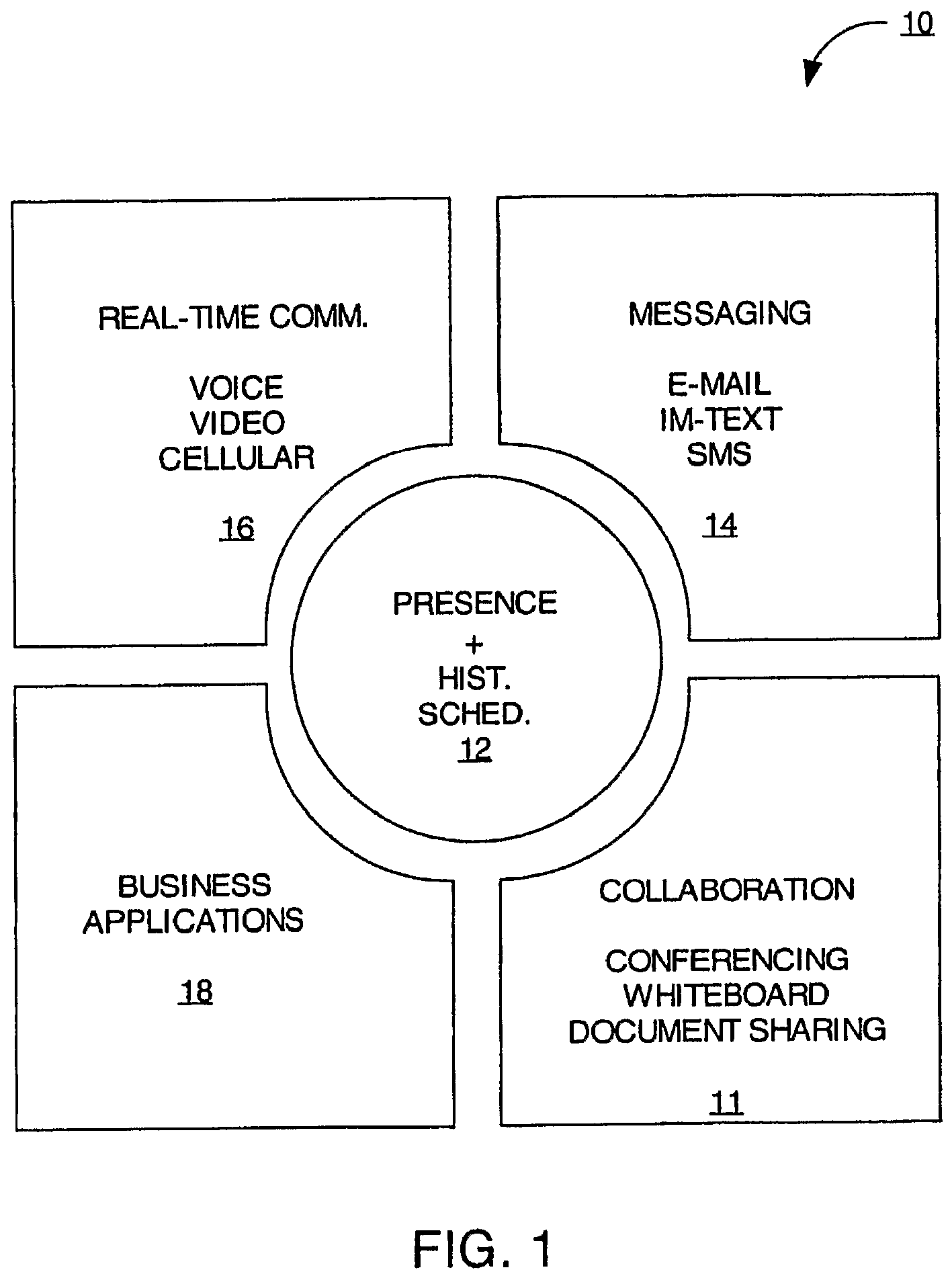 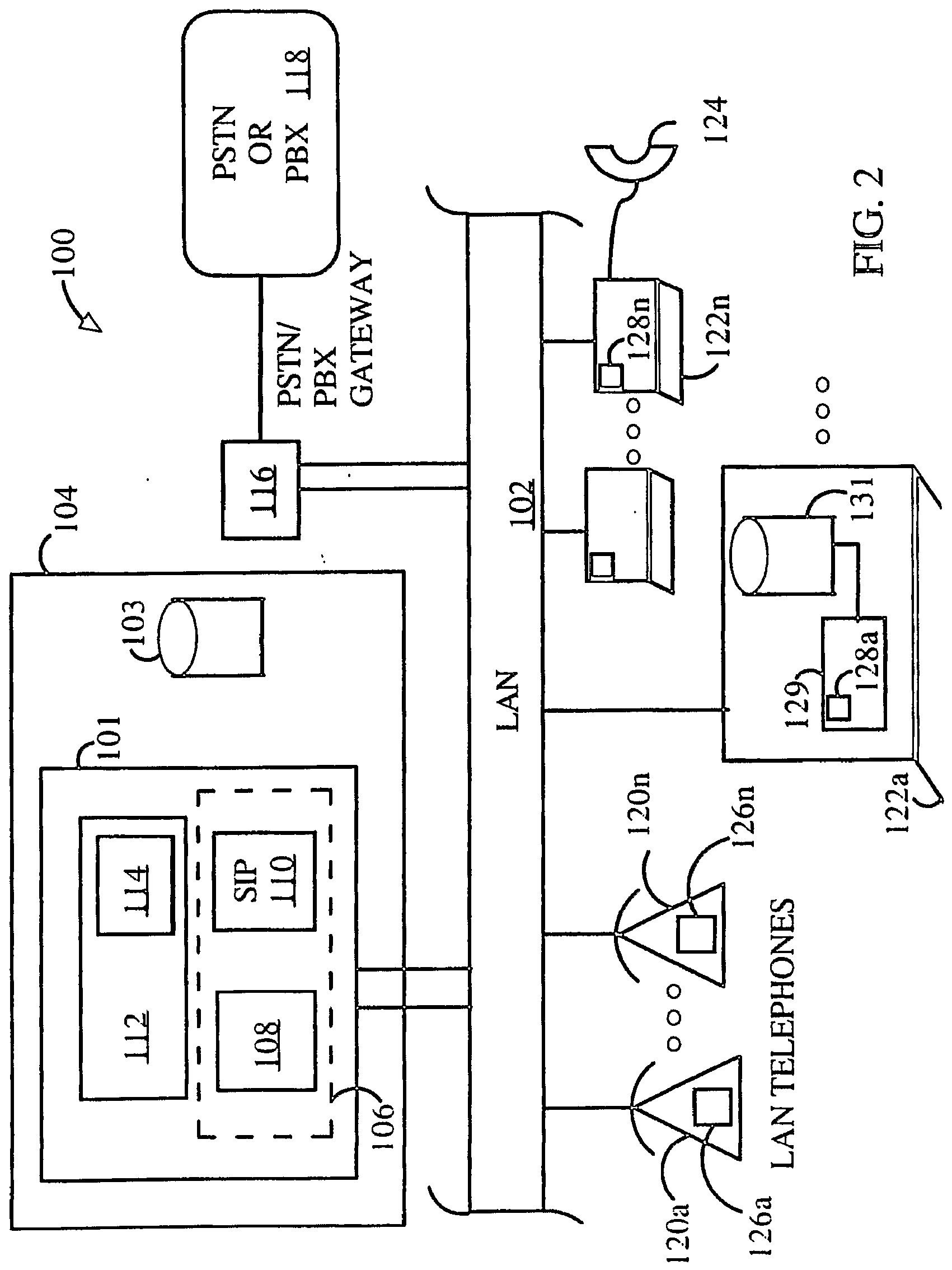 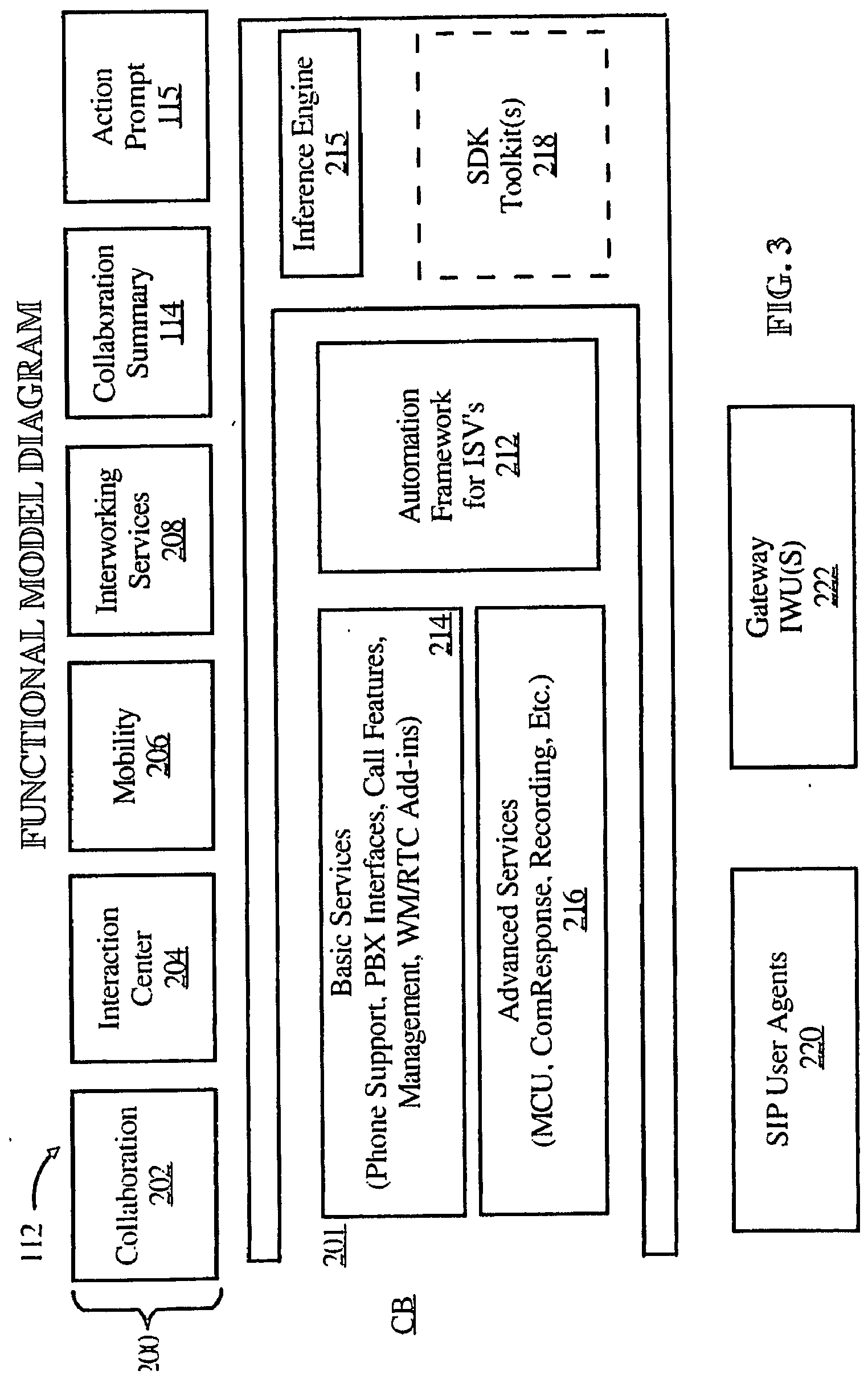 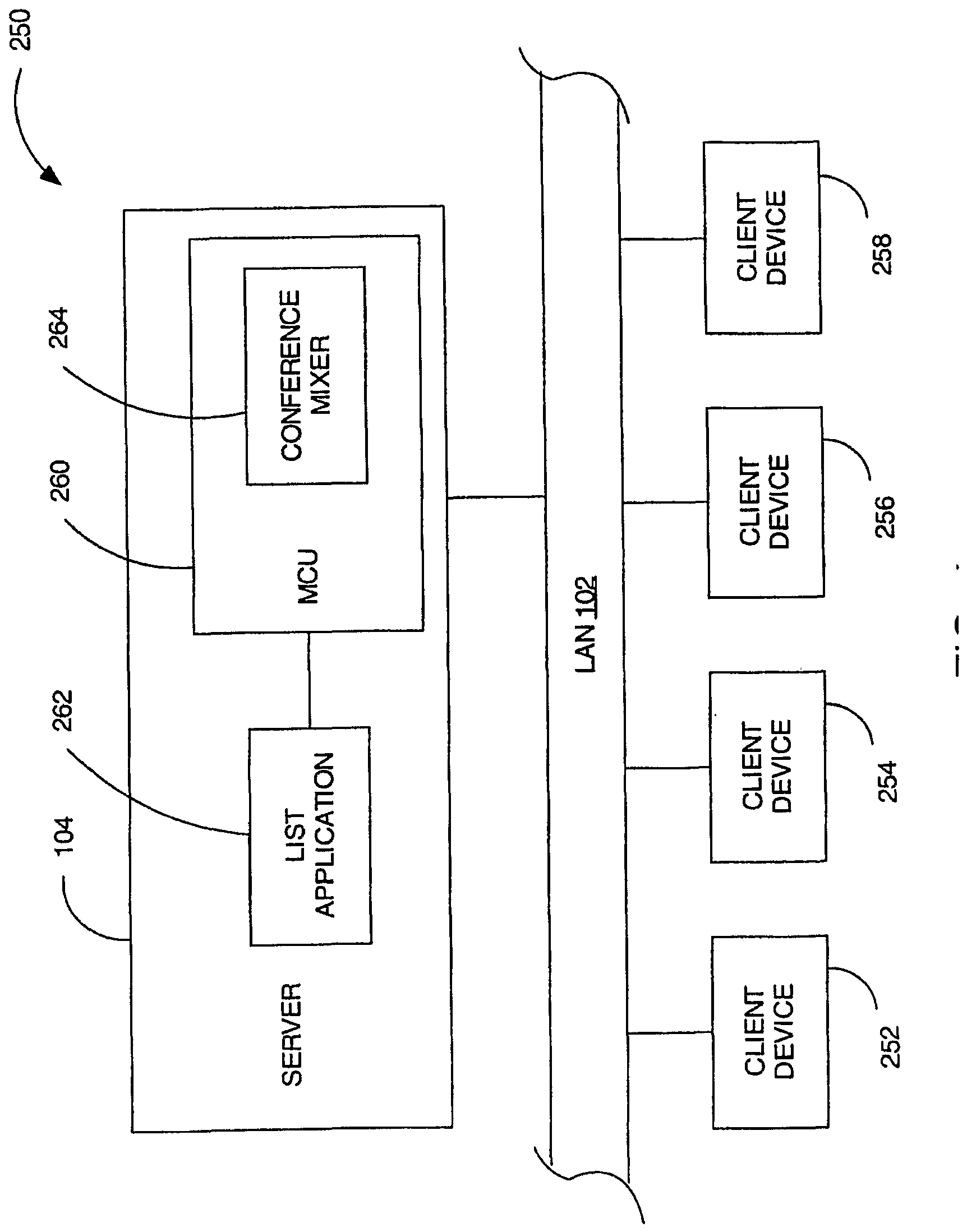 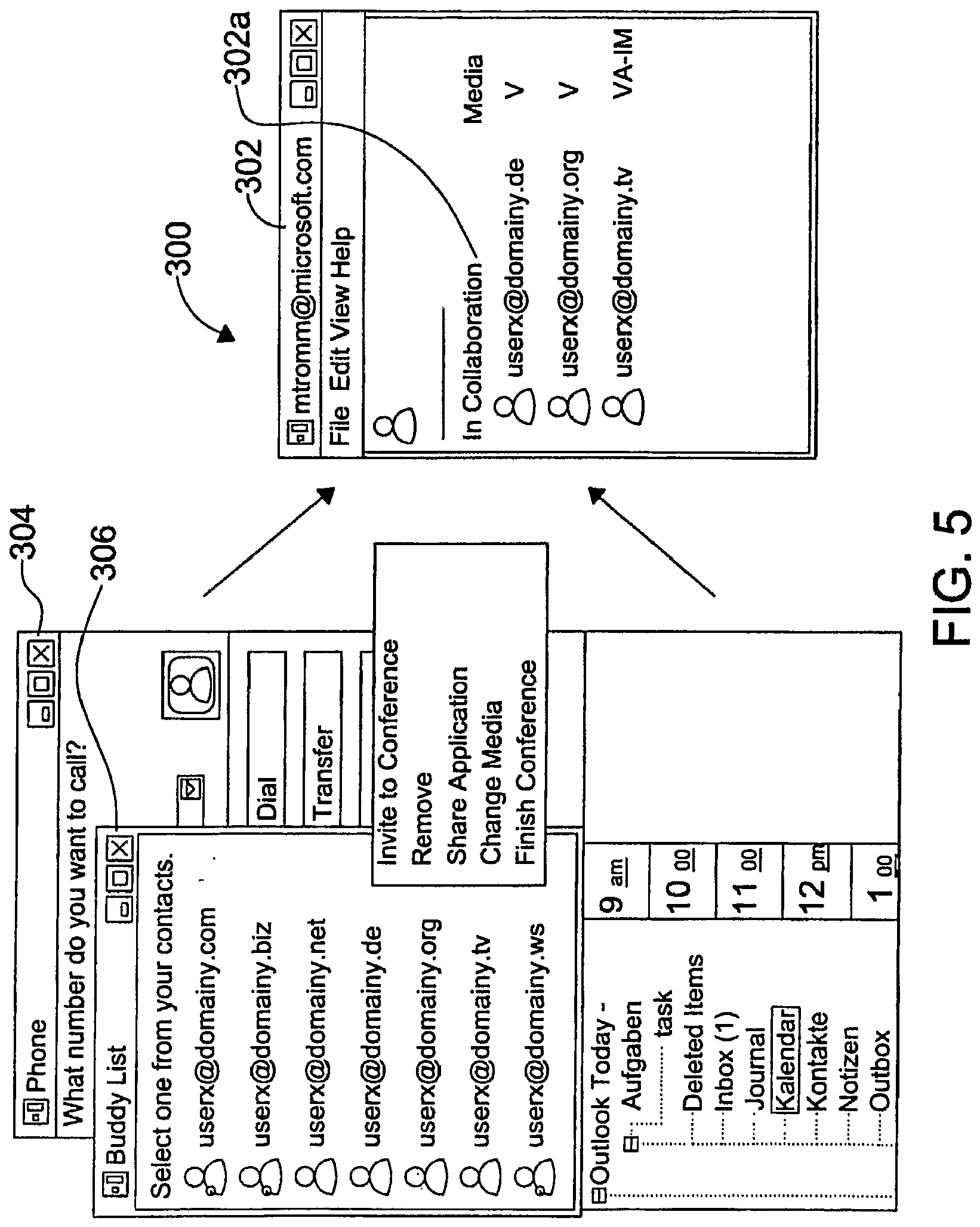 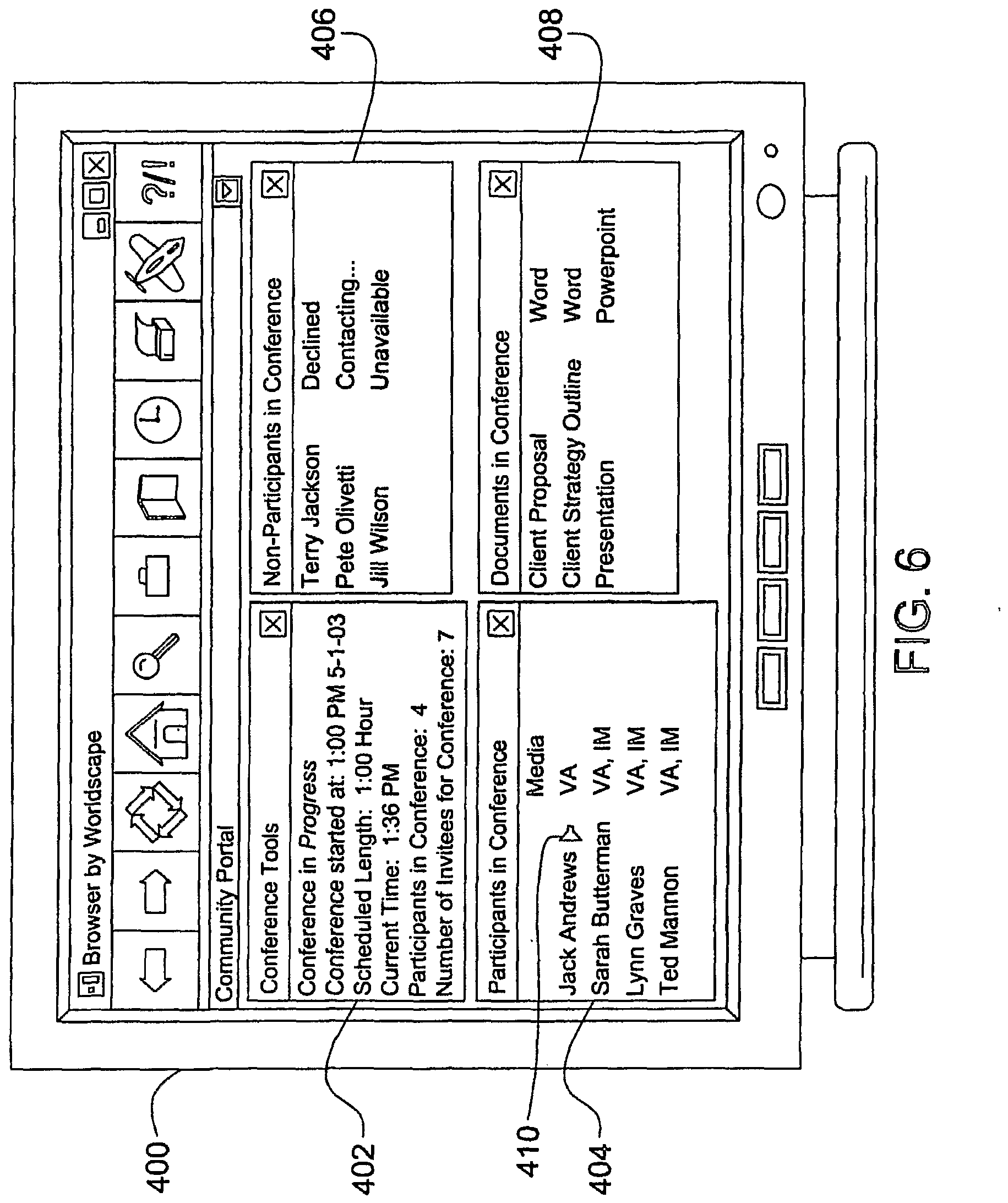 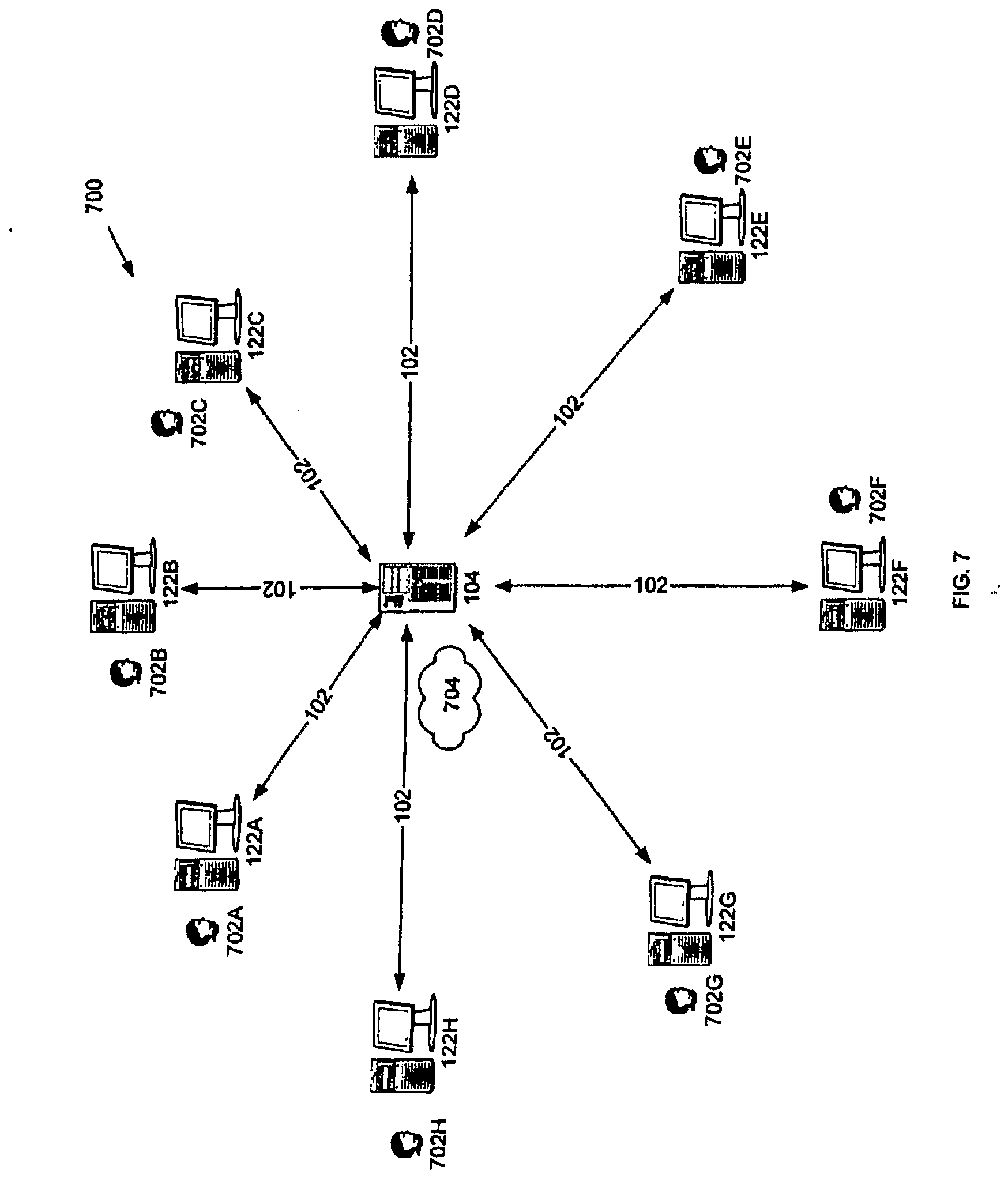 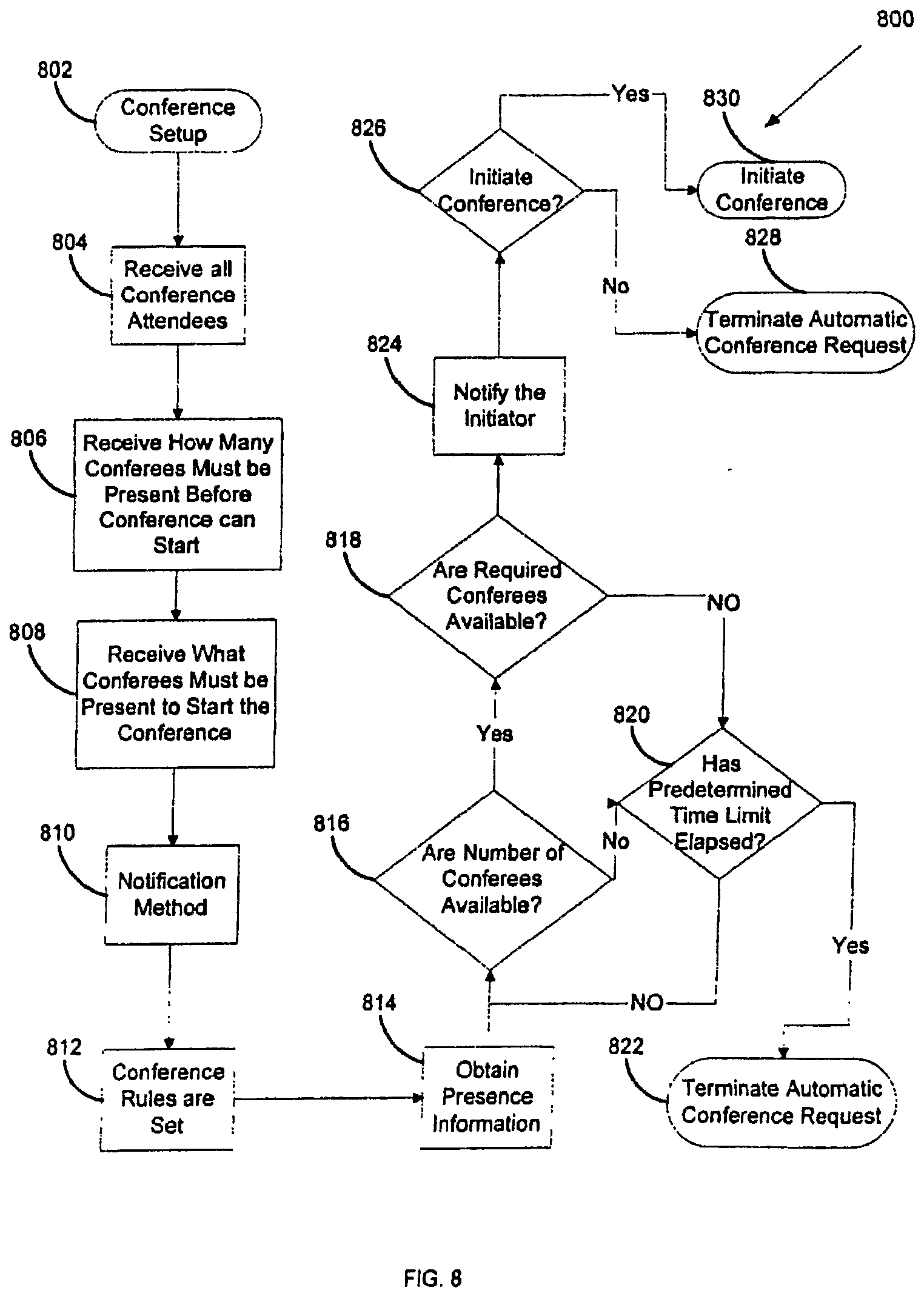 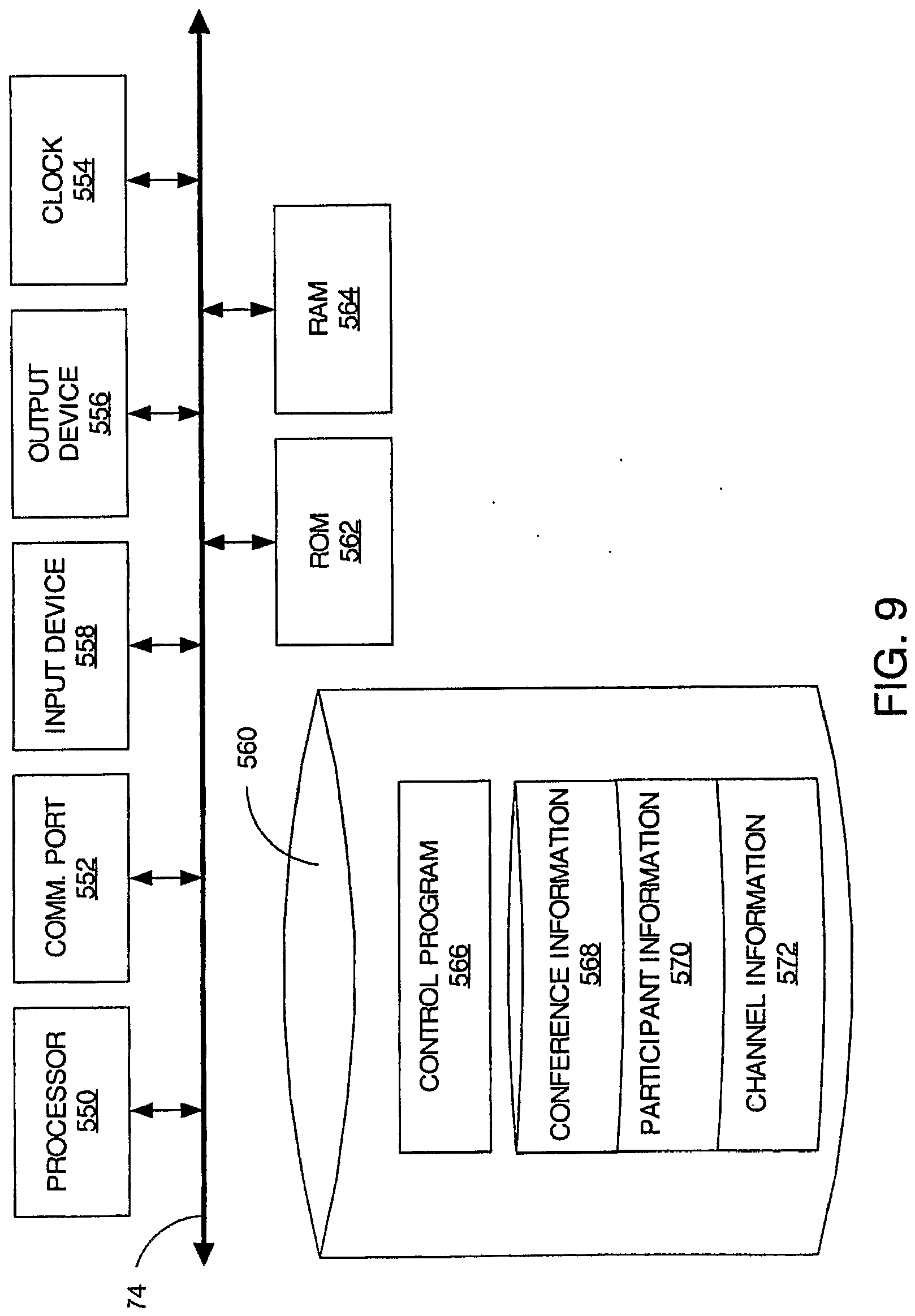