[0002] Measurements of various physiological parameters are important to the study of the human condition. Physiological measurements can be particularly important in a health care setting, such as in a hospital. One of the more important physiological measurements performed on a patient is the electrocardiogram (ECG), showing the condition of the human heart.
[0003] Portable patient monitors have evolved that allow patients to enjoy at least some mobility. Typically a battery operated monitor can be hung on a belt, shoulder strap, or carried by a patient using some other similar hanging arrangement. Sensors, such as ECG electrodes, are affixed to the patient's body, such as with tape, and connected to the battery operated monitor by wires. After a fixed interval of time, or at a low battery indication, the batteries can be replaced or recharged. One example of a portable patient monitor is the Micropaq wireless patient monitor, manufactured by Welch Allyn, Inc., that permits multi-parameter monitoring and patient alarm capabilities built in a small, rugged, lightweight, patient-wearable device.
[0004] Another version of a portable physiological monitor is the heart rate monitor typically used by individuals engaged in an athletic activity. The monitor includes a sensor, which generally makes direct or indirect contact with an individual's chest to monitor heart beats and then by wires, or by wireless techniques, the sensor transmits the sensed heart beat to a nearby microcomputer based monitor and display. Such units generally measure only heart beat and are not capable of doing any of the traditional ECG analysis functions.
[0005] A recurrent problem with the portable monitors typically used in healthcare applications is the need for wires from sensors situated on the patient's body to the portable unit. These wires can become tangled and cause discomfort or become unplugged when inadvertently pulled or tugged on. In addition, wire motion can increase ECG noise due to the triboelectric effect. Muscle movement can also increase ECG noise, due to the typical placement of ECG electrodes over major muscles. Moreover, portable monitor battery maintenance (e.g. battery recharging or replacement) can be time consuming and costly.
[0006] Another problem is related to the requirement that a medical grade monitor survive multiple defibrillation cycles of at least 360 joules. Conventionally, this requirement has been met by one or more power resistors situated in series with the wire leads of a fixed or portable physiological monitor. The problem is that the physical volume of conventional power resistors is too large for use in a compact monitor application.
[0007] Another shortcoming of small sensor devices is that these devices lack the intelligence to vary the amount and type of data transmitted, depending on patient condition. Exercise heart monitors do not transmit a full patient waveform for clinical analysis while medical monitors measure and transmit the full patient waveform, even when the patient is healthy. While transmitting the full patient waveform is the preferred solution from a purely clinical standpoint, such transmission requires significant power to transmit large amounts of data and restricts the design from being small and inexpensive.
[0008] Yet another problem is that arrhythmia analysis is a computationally intensive operation not well-suited to existing small portable monitors that presently have no ability to perform arrhythmia analysis.
[0009] US 2003/0149349 discloses a "smart bandage" or "smart patch" that has an electronic circuit and battery, sandwiched between layers of insulating material and cover plastics. On the skin contacting side of the assembly, a pair of conductive, adhesive gel pads are intended to be placed upon the torso or abdominal area of a human or other mammal in order to sense the heart-rate voltage differential across the sensors.
[0010] WO 2006/094513 A2 discloses a three-dimensional adhesive device having a microelectronic system embedded therein.
[0011] US 2002/0072682 A1 discloses a wireless electrocardiograph system and method.
[0012] US 2005/0054941 A1 discloses a physiological monitoring garment.
[0013] US 2004/0019288 A1 discloses a patient-worn medical monitoring device.

[0018] For a further understanding of these and objects of the invention, reference will be made to the following Detailed Description which is to be read in connection with the accompanying drawings, in which:

FIG. 1B shows a partially unassembled side view of the body worn physiological monitor of FIG. 1A;

FIG. 1C shows an assembled side view of the body worn physiological monitor of FIG. 1A;

FIG. ID shows a bottom view of the body worn physiological monitor of FIG. 1A;

FIG. 3 shows an exploded perspective view of an exemplary computation and communication module;

FIG. 4A shows an exemplary disposable unit flexible circuit board;

FIG. 4B shows a partial enlarged view of a portion of the flexible circuit board of FIG. 4A, further showing an exemplary resistive trace having a fillet;

FIG. 4C shows a partial side elevated view of a portion of the flexible circuit board of FIG. 4A, further showing an exemplary conductive surface overlaying a resistive material;

FIG. 4D shows a partial side elevational view of the circuit board of FIG. 4A, further showing an exemplary conductive surface having a snap receptacle;

FIG. 5 shows a block diagram of one embodiment of a body worn physiological monitor having a power source in a disposable unit;

FIG. 6 shows a block diagram of one embodiment of a body worn physiological monitor having a power source in or connected to the computation and communication module;

FIG. 7A shows a schematic diagram of a direct connected reference electrode used in conjunction with a body worn physiological monitor;

FIG. 7B shows a schematic diagram of a virtual reference electrode as used in conjunction with a body worn physiological monitor;

FIG. 8 shows a schematic diagram depicting one embodiment of an analog switching arrangement provided on a body worn physiological monitor to select a reference electrode configuration;

FIG. 8A shows an exemplary driven lead circuit topology for use with electrodes of a body worn physiological monitor;

FIG. 10 shows an alternative circuit protection to that depicted in FIG. 9;

FIG. 11 shows a flow chart for an algorithm utilized by a body worn physiological monitor to detect whether a patient has a pace maker;'

FIG. 13 shows seven graphs of amplitudes plotted versus frequency to illustrate exemplary operation of the circuit of FIG. 12;

FIG. 14 shows two exemplary positions for a body worn ECG monitor to be non-permanently affixed directly to a patient's body;

FIG. 15 shows a block diagram of a setup for simulating the effect of patient defibrillation on resistive traces;

FIG. 16B shows a histogram of an exemplary resistive distribution of baked resistive dots; and

[0019] Package styling varies slightly between the drawings. Such minor differences, e.g. the case styling of computation and communication module 102, illustrate minor variations in mechanical packaging suitable for use as body worn monitors. Drawings are not necessarily shown to scale.

at least one internal or external power source to power the body worn patient monitoring device (100); and

the body worn patient monitoring device (100) including the at least one disposable electrode module (110) and the at least one removable and reusable communication-computation module (102) is directly non-permanently affixed to the skin surface of the patient. 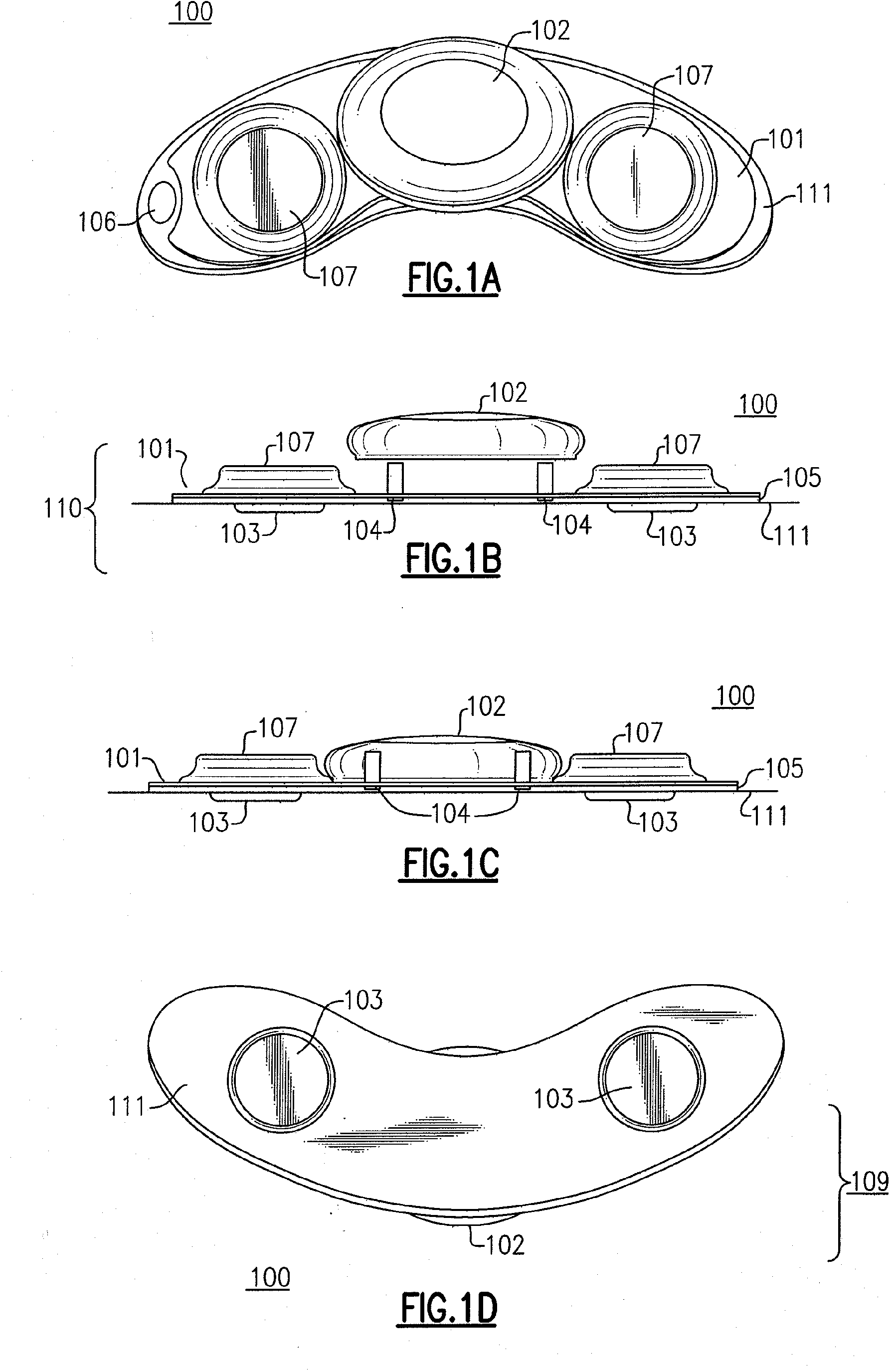 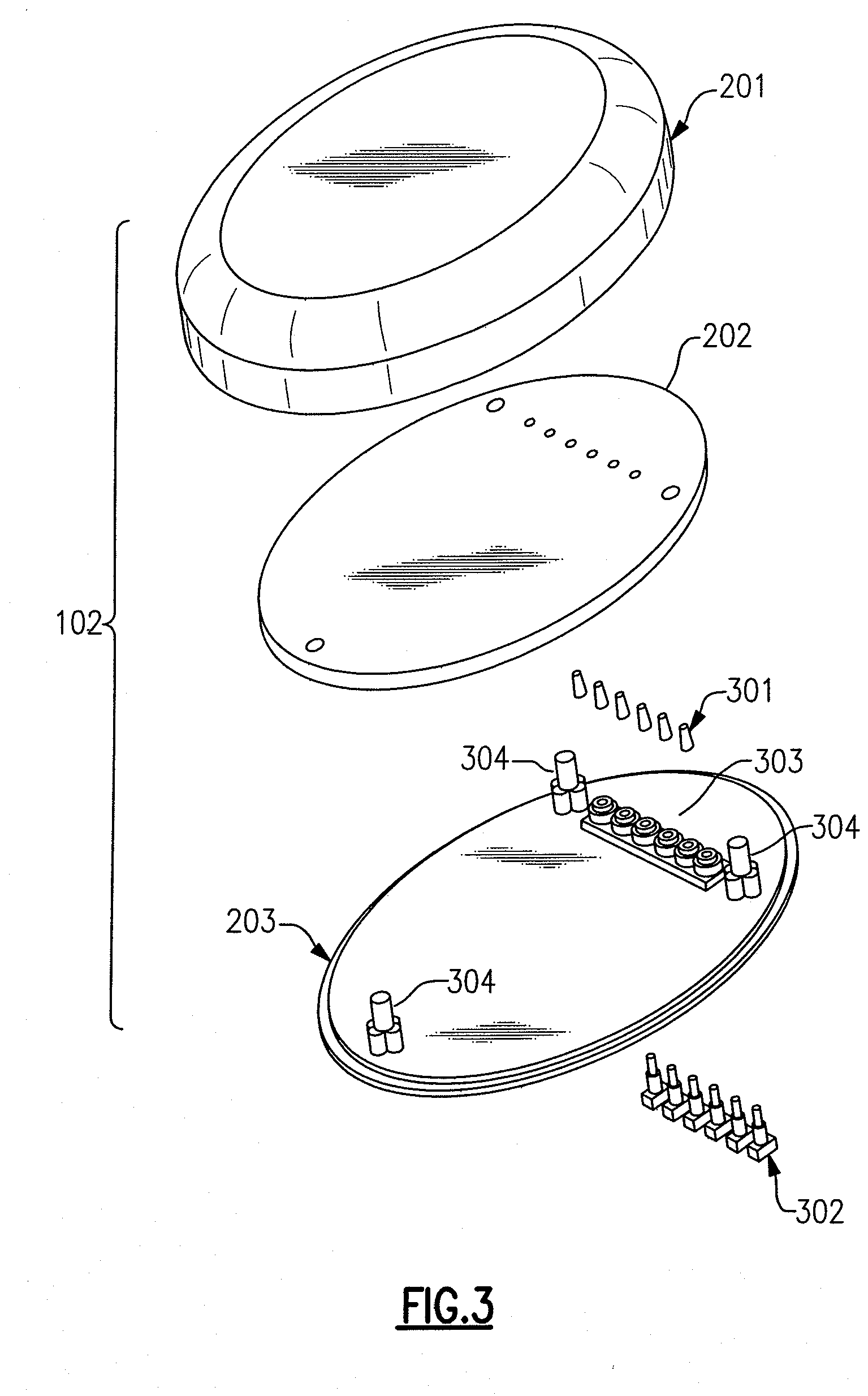 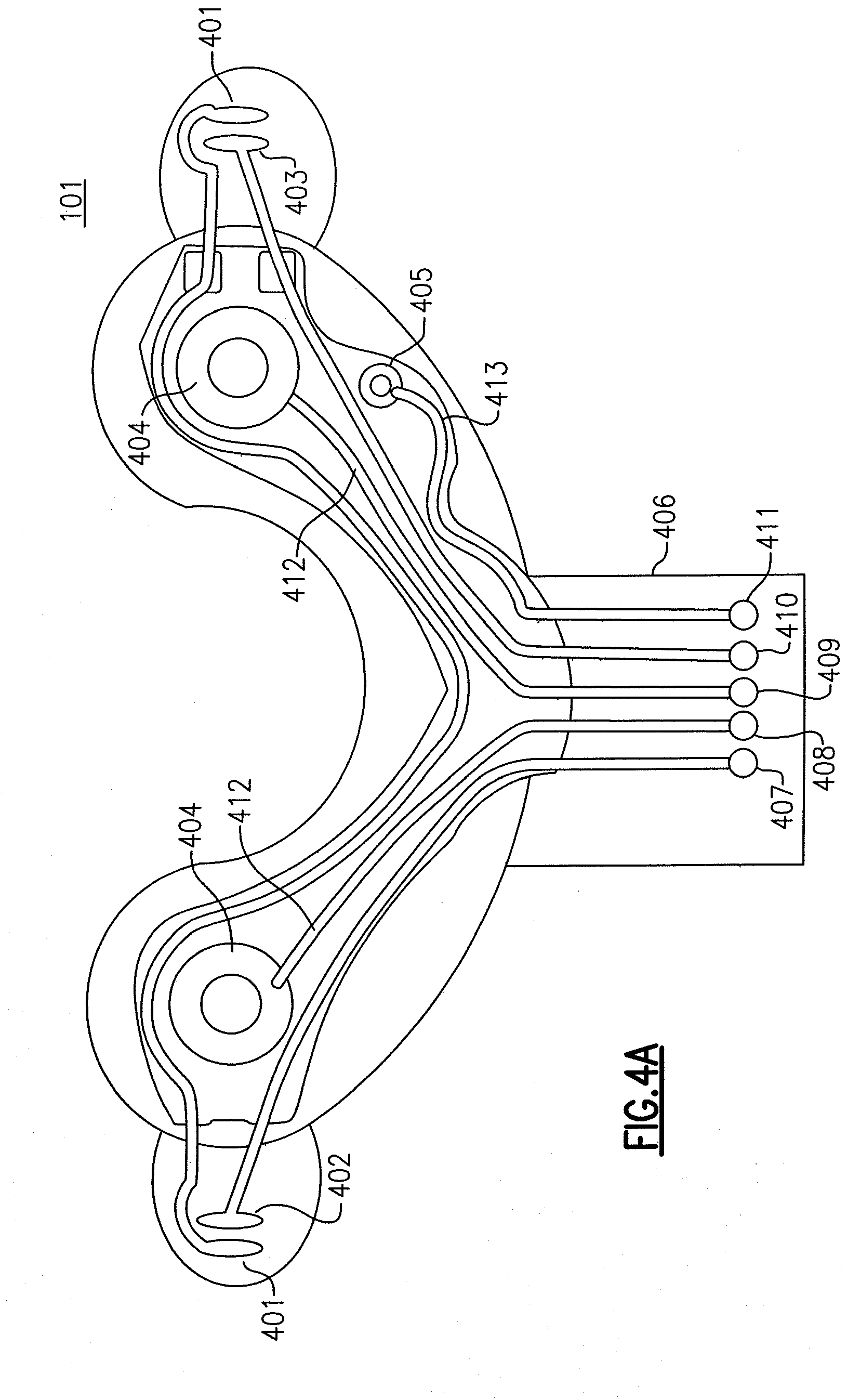 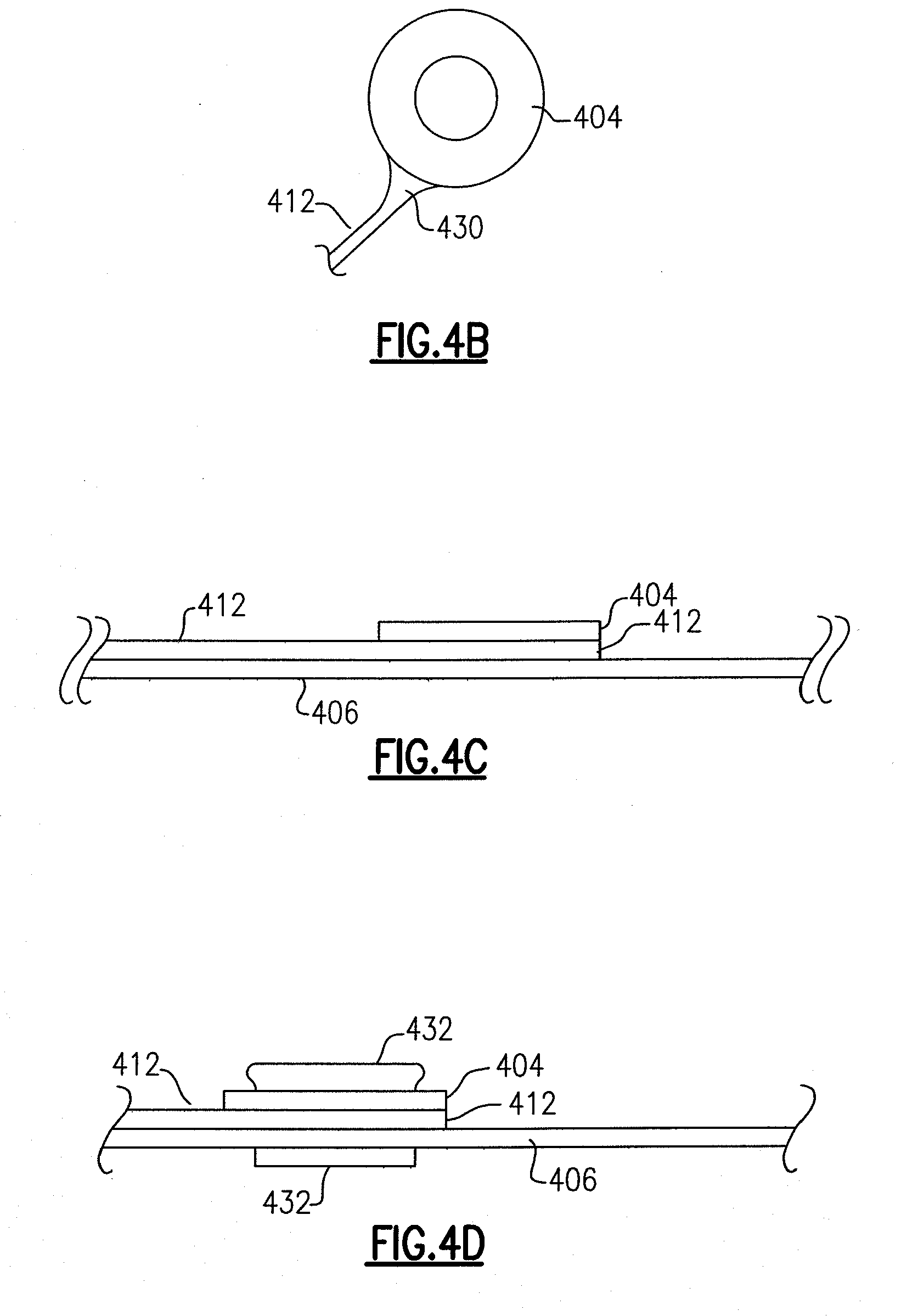 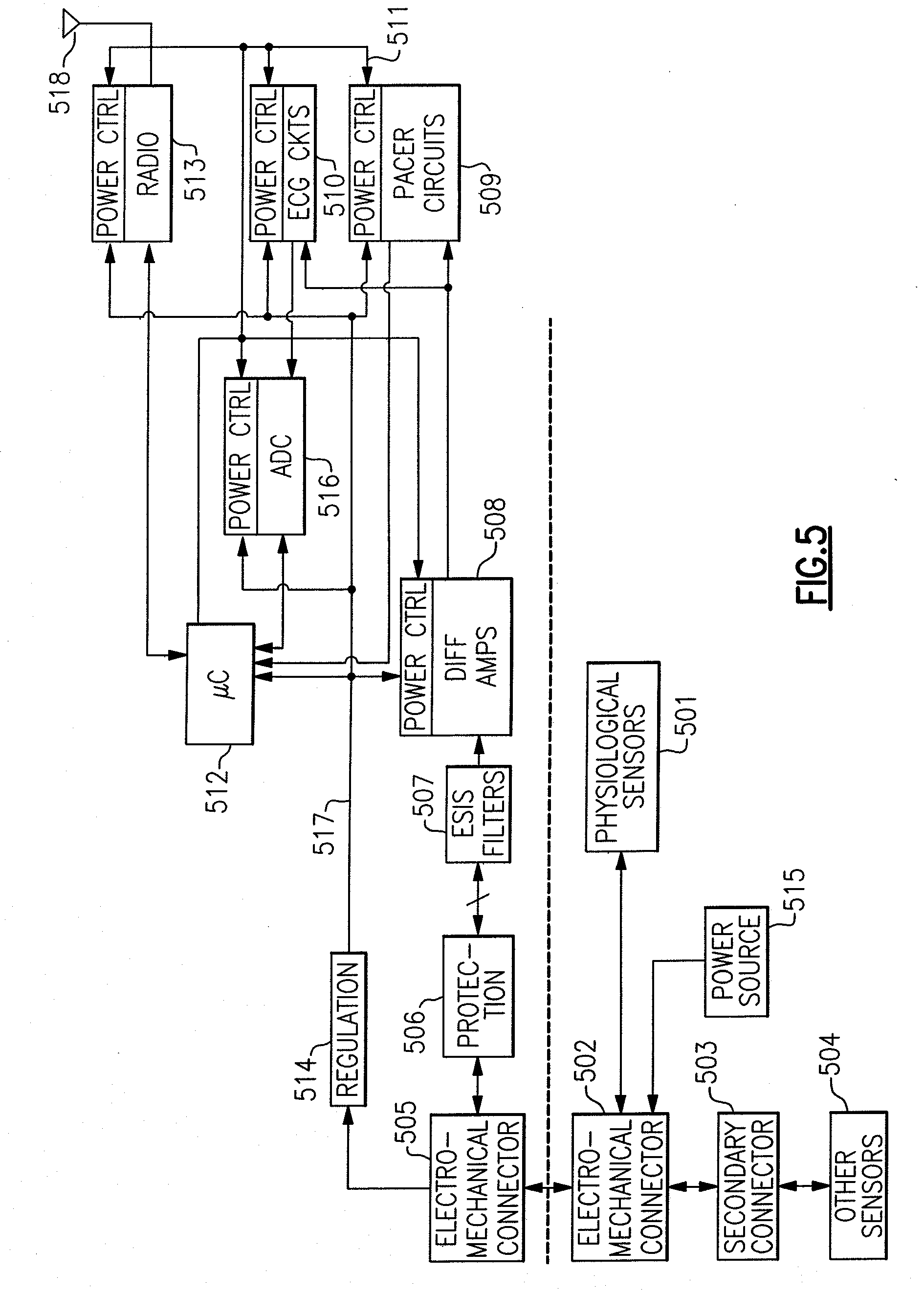 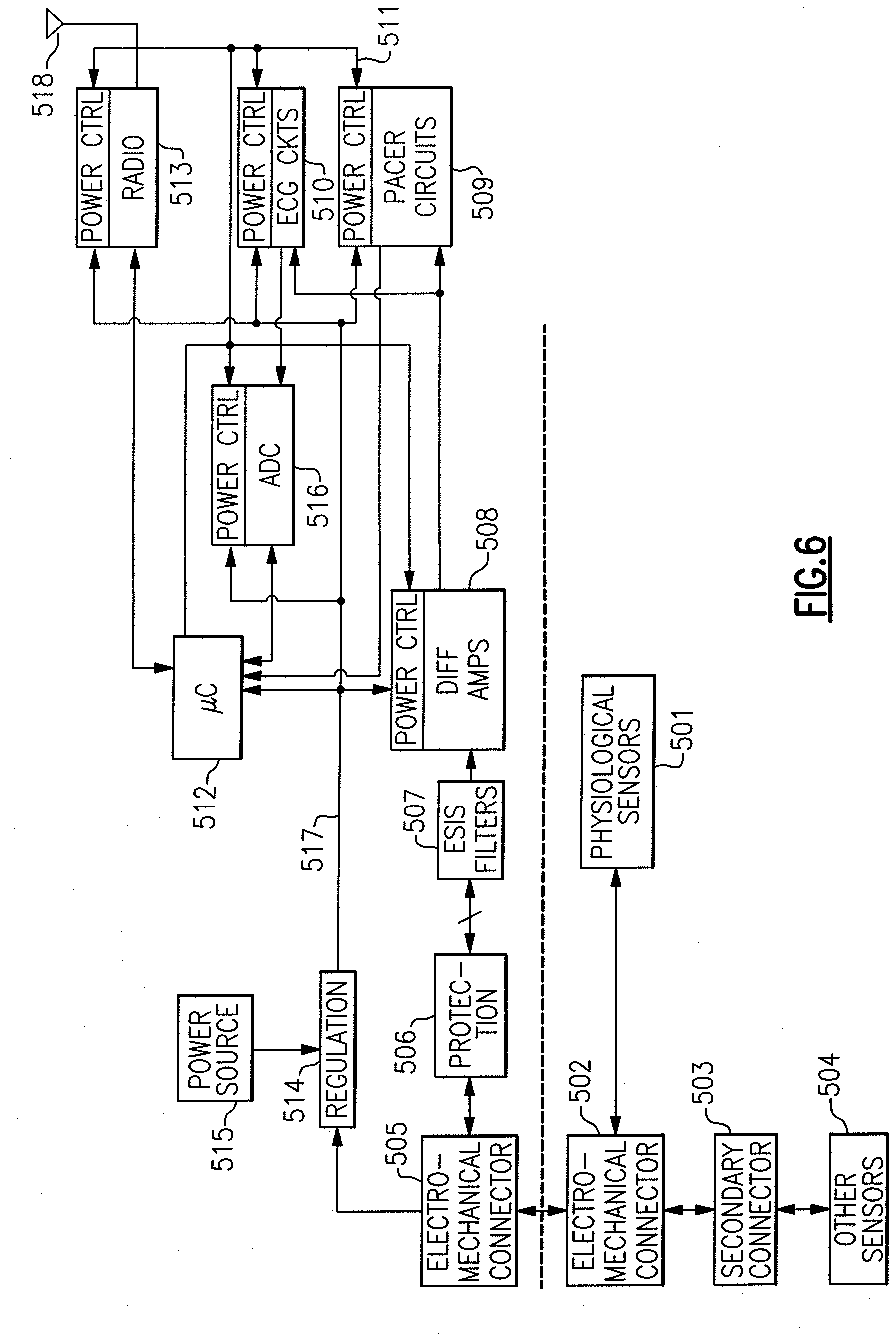 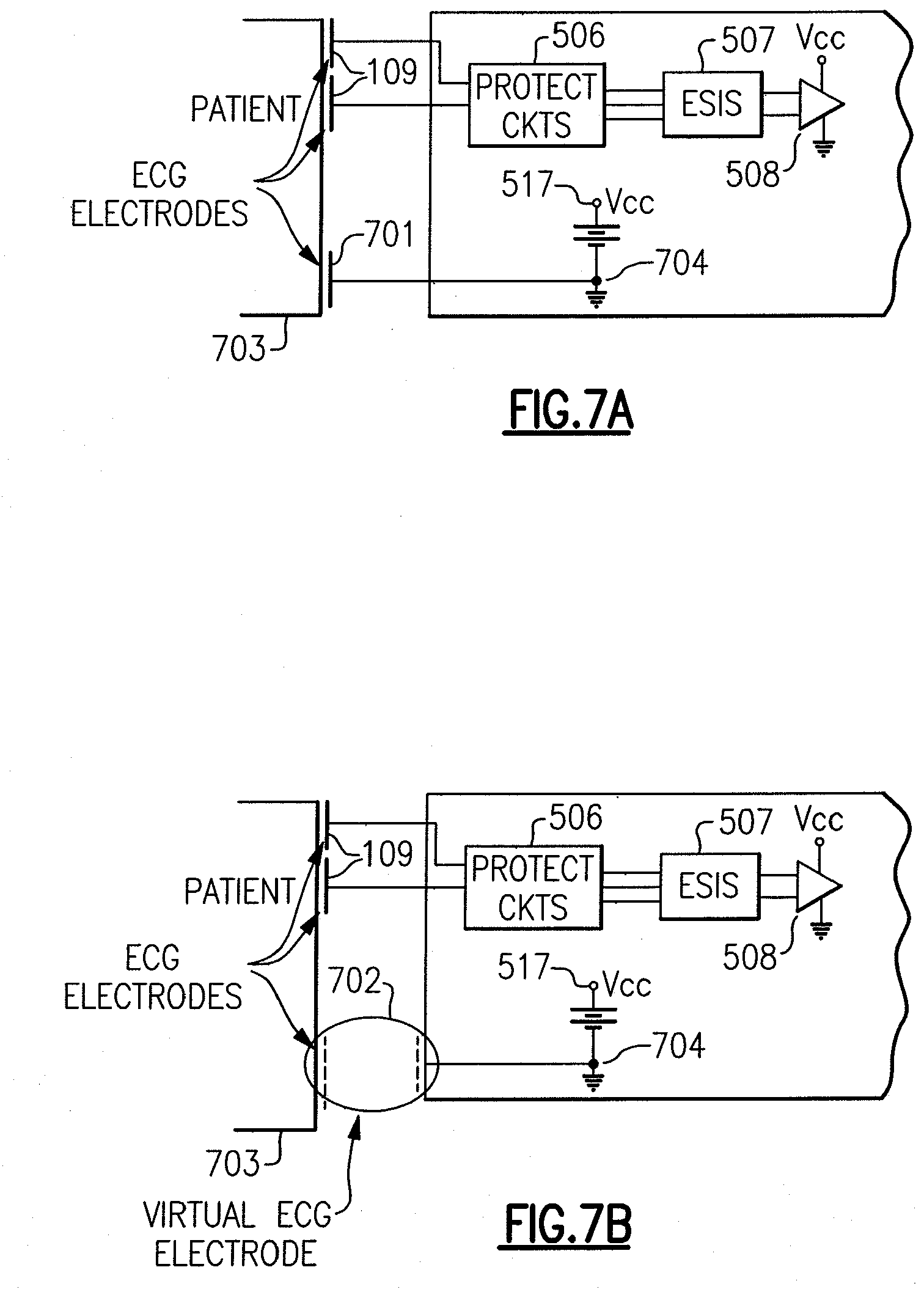 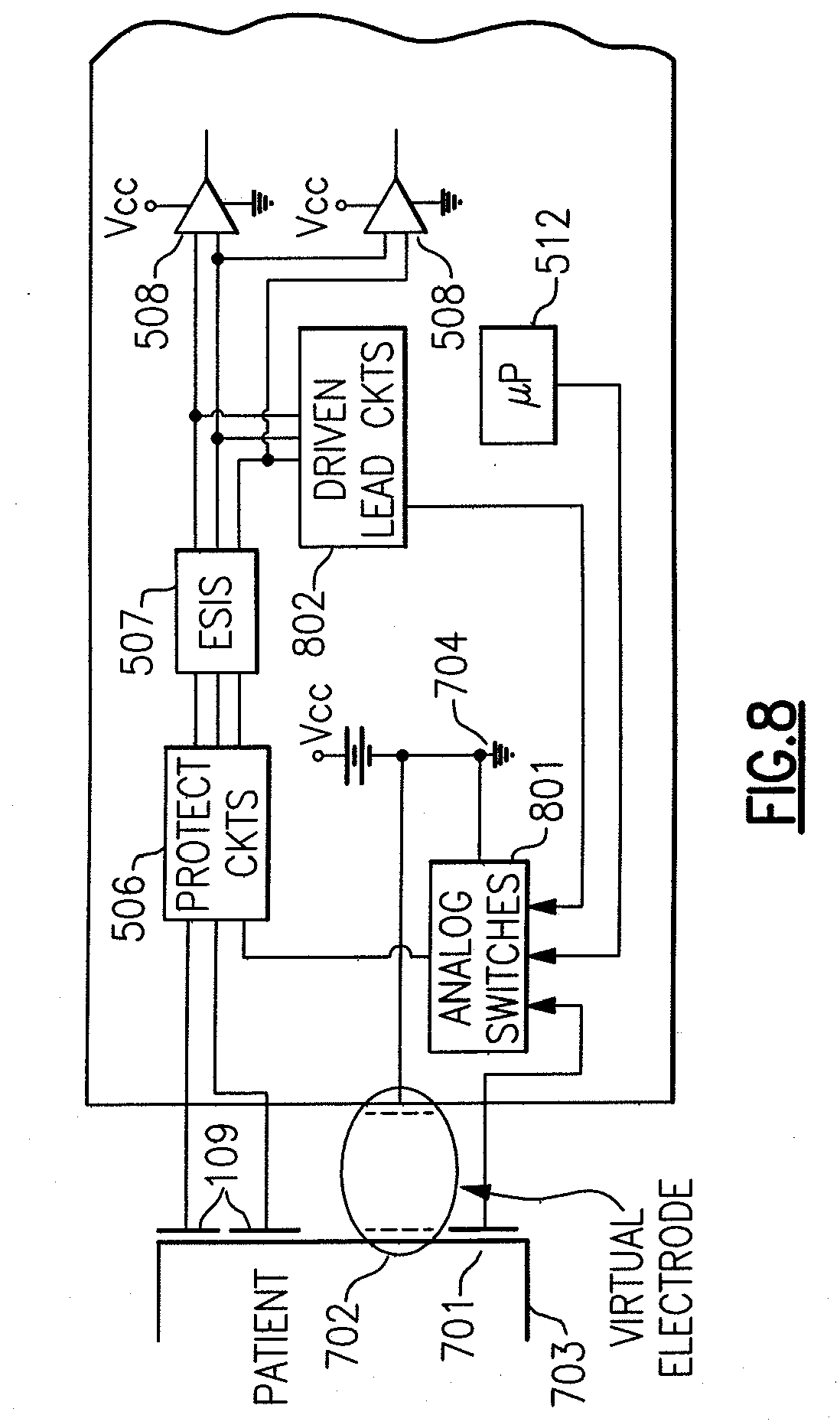 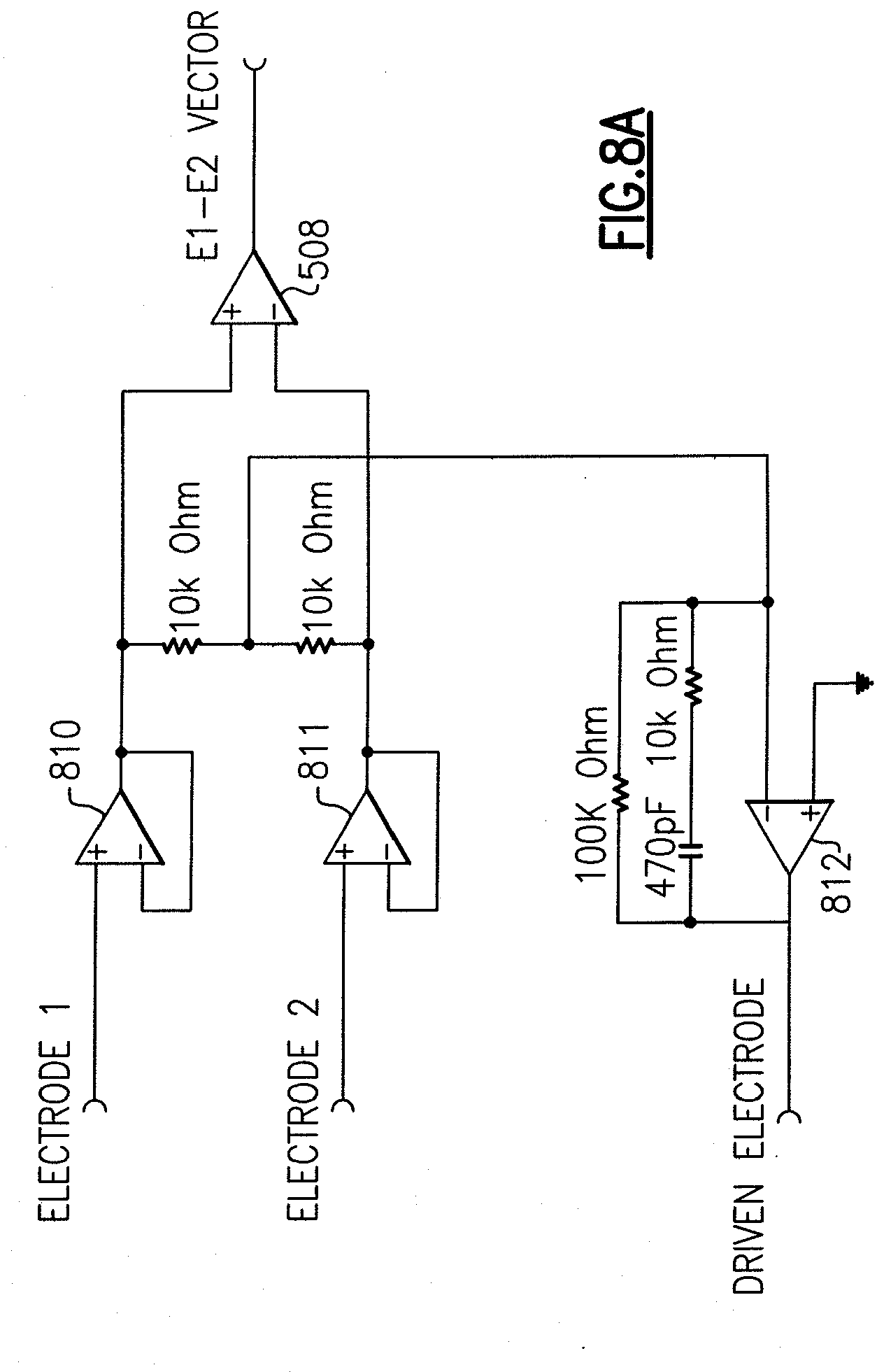 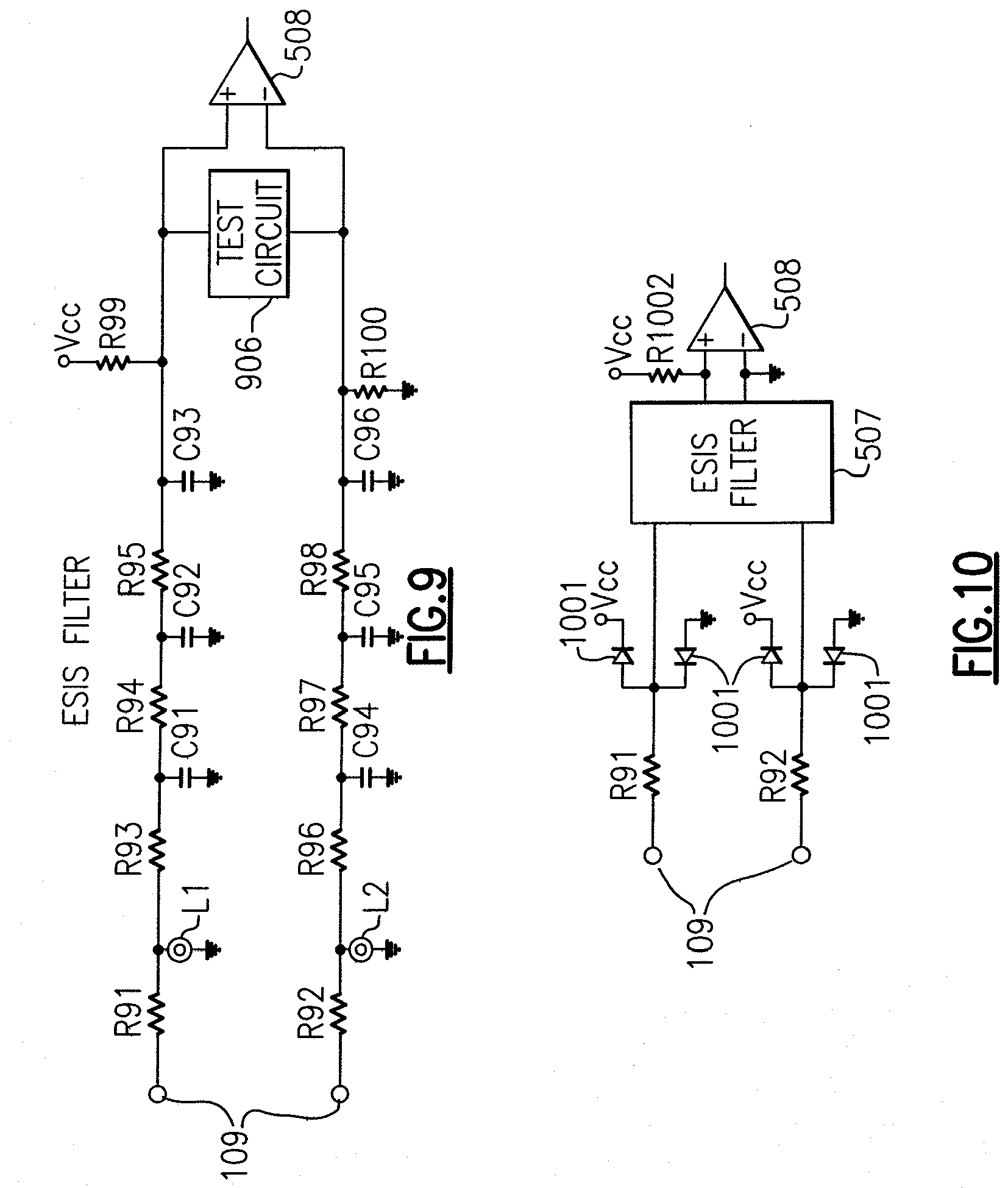 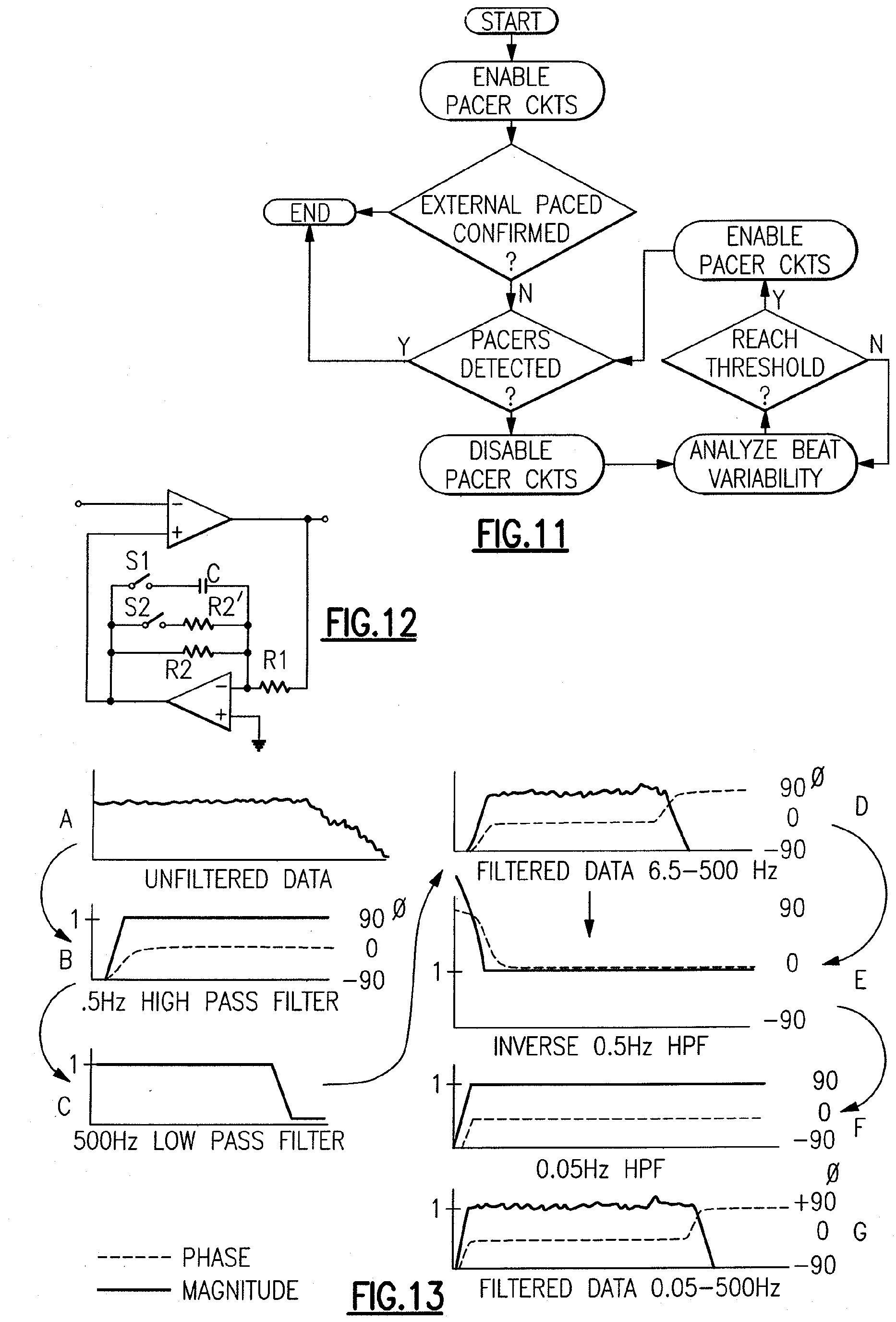 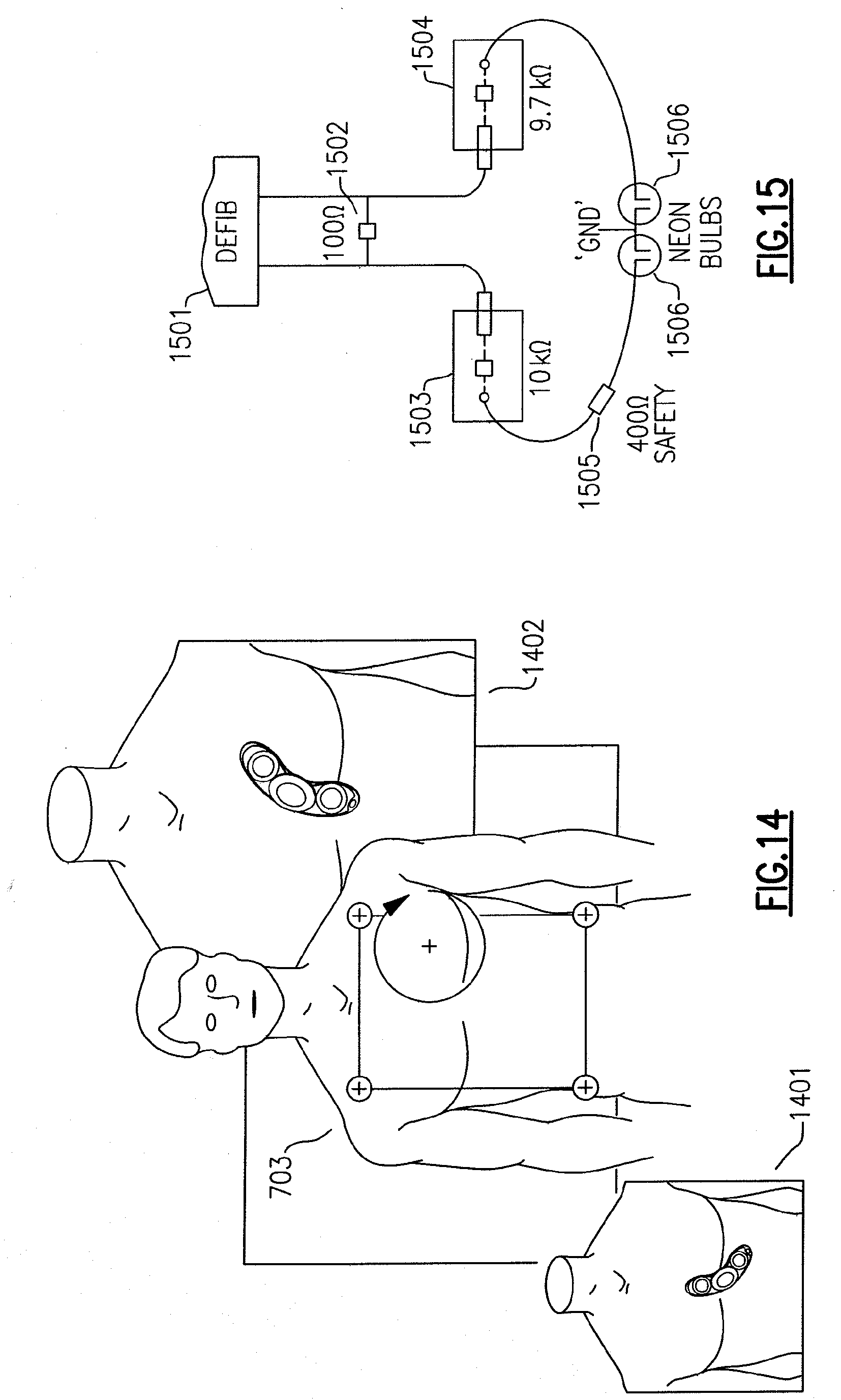 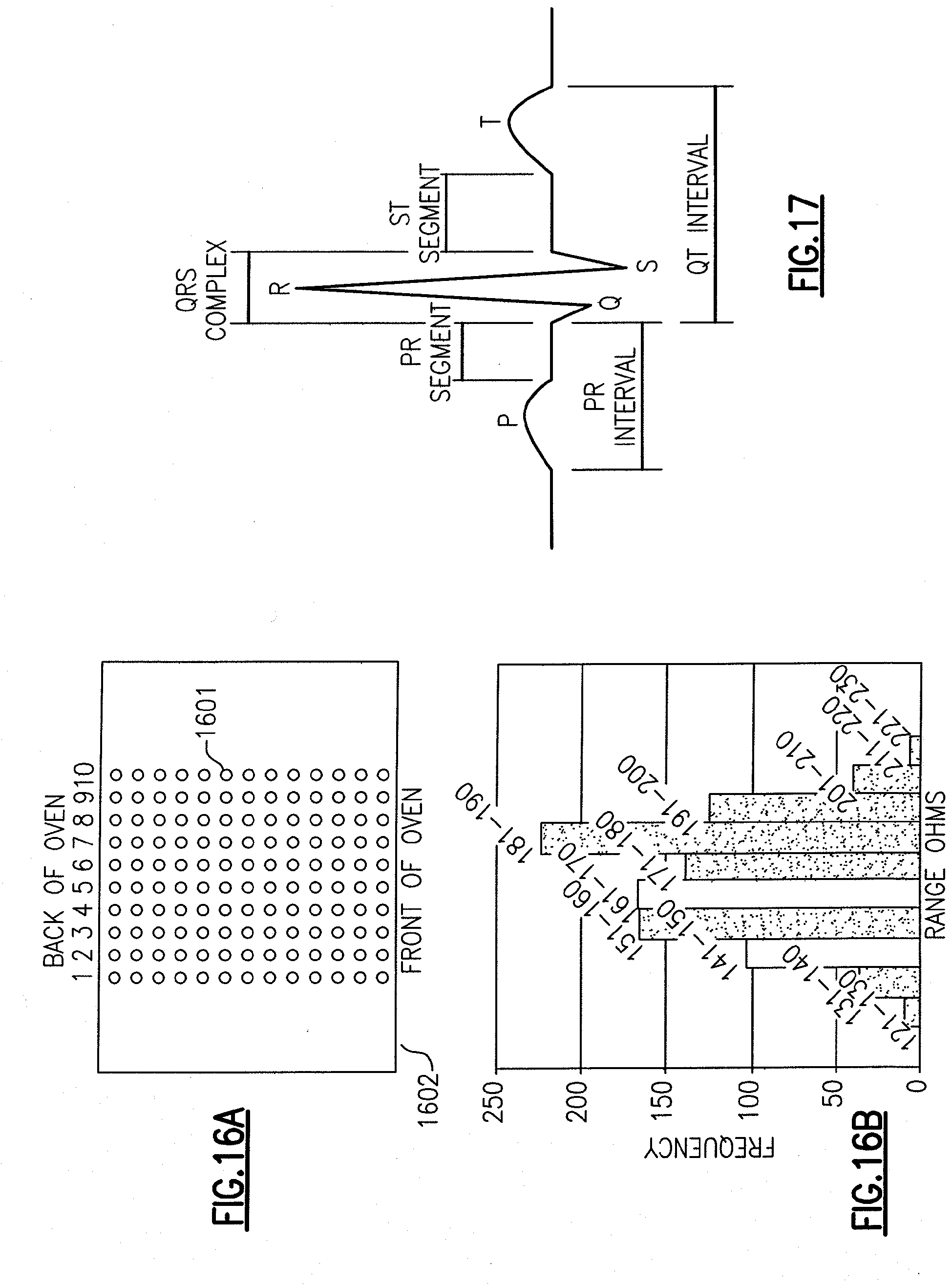