[0002] In the paper processing industry, in particular the processing of tissue paper, multiple packages of items are manufactured, in particular rolls of paper, intended for the end user. The latter purchases the package, which can contain a dozen rolls, for example, and uses them gradually. For reasons of economy and production simplicity there is the tendency to produce packages containing an increasing number of rolls or other articles, such as packs of serviettes or handkerchiefs. In a sense, this is an advantage also for the consumer who does not have to buy them as often.
[0003] However, large packages can also have some drawbacks. In particular, once they have been opened to take the first rolls out, they no longer adequately protect the remaining products. Furthermore, when in a house or an office there are several toilets or in general several rooms where the rolls are required, they have to be taken from the area where the packages are kept and distributed to the various rooms, with obvious drawbacks also in terms of hygiene, since the rolls stored in each room no longer in their packaging tend to become dirty.

[0004] According to one aspect, the invention concerns a package, which overcomes or alleviates wholly or partly the above-mentioned drawbacks.
[0005] According to the invention, a package for tissue paper products, such as toilet rolls, kitchen paper rolls, packs of disposable serviettes and the like, is provided which comprises an external wrapping sheet enclosing said products, wherein said sheet - which can consist of a sealable plastic film - forms at least two adjacent semi-packages that can be detached from one another.
[0006] Two adjacent semi-packages are advantageously joined along a double tear line, so that the semi-packages can be easily separated.
[0007] Each semi-package remains integral, i.e. it envelops its contents in a substantially complete manner. In this way the user can purchase a package of considerable dimensions, containing a large number of products (such as rolls of tissue paper or other) and then easily split the package into two or more semi-packages, each of which is enclosed by a portion of the sheet of plastic film or other suitable material in order to adequately protect the contents. The various semi-packages can then be kept in one single place or distributed in several places, for example in an office or house with several toilets or other rooms where the products are used. In any case each semi-package is protected until it is opened and therefore each roll or other packaged article is protected longer even when the initial package contains a large number of articles or products.
[0008] According to some preferred embodiments of the invention, the double tear line can consist of a double incision line between two sheet sealing lines cooperating to form two adjacent semi-packages.
[0009] In some embodiments, the package in question comprises at least one handle and in particular can comprise at least one handle for each semi-package, and if necessary a further handle for the unit of two or more semi-packages that form the complete package. In a possible embodiment, said double package can include two handles, formed on two opposite sides of the unit.

[0010] The invention will be better understood by following the description and the accompanying drawing, which shows a practical non-limiting example of the invention. In the drawing:

Fig. 2 shows the package of Fig. 1, used for a plurality, in particular four sets, of toilet rolls, still open;

Fig. 3 shows the embodiment of Fig. 2 closed with its contents;

Fig. 4 shows an enlarged detail of a section according to IV-IV of Fig. 3;

Fig. 5 shows in a perspective view a modified embodiment of two semi-packages.

Detailed description of embodiments of the invention

[0011] According to the illustrations of Fig. 1 to 4, the package in question is produced by two sheets 1 and 3 (or by one sheet folded in two) sealed together along two external seals 5, 7 and along two intermediate seal lines 9, 11 close to each other. A tear line, provided for example by an incision or perforation and indicated by 13, is obtained in the two thicknesses of the sheet in the area between the two seal lines 9, 11. The incision line can be formed by a perforation line.
[0012] This provides two semi-packages, which can be easily separated from each other along the incision or tear line 13. Each semi-package is provided at one end with a lip 15 or strip with a handle (i.e. grip) 15A and at the opposite end has the opening for placing the contents inside, for example rows of rolls. The sheet 3 forms two appendixes 3X, each of which is long enough to be folded and fixed on the sheet 1 to close the respective semi-package, as shown in Fig. 3. In the same way more than two adjacent semi-packages can also be obtained, separable from one another, and each of them can have at least one handle.
[0013] With this arrangement the two (or more) semi-packages are joined to one another and can be separated from one another after purchase of the complete package. The user purchases the pack consisting of the two semi-packages joined along the tear line 13 and takes them home. Here, if necessary, he separates the two (or more) semi-packages, distributing them in different rooms, for example. Each semi-package remains whole until used for the first time and this provides effective protection of the rolls or other products contained in the semi-packages. The handles like those shown by 15A are available individually for each semi-package to facilitate handling.
[0014] In an intermediate position on the lip or strip 15, centrally between the two semi-packages, a further handle 17 can be provided, appropriately shaped so that it can be used when the two semi-packages are still joined. The handle 17 can be shaped so as to provide a strong gripping bridge, which can resist even when crossed by the incision or tear line 13, which extends through the bridge itself. Extension of the incision or tear line 13 through the bridge defining the handle 17 facilitates the subsequent reciprocal detachment of the two semi-packages.
[0015] Fig. 5 shows an embodiment modified with respect to that of Fig. 1 to 4, since the lip 15 or appendix is replaced by a seal 115, and from seals 105 and 107 corresponding to 5 and 7 two lips or appendixes 115 and 117 develop, each provided with handle 115A and 117A for the two respective semi-packages, when split along the incision or tear line 113. The incision or tear line 113 is similar to tear line 13 and is provided between two seal lines 109, 111 parallel to each other, developing transversally to the sheet forming the package. The tear line 113 can be obtained by perforation, incision or similar process, suitable for defining a preferential tear, cutting or breaking line. The two semi-packages in this case can be closed with lips or appendixes 103X similar to appendixes 3X.
[0016] It is understood that the drawing shows only one example of the invention, which can vary in the forms and arrangements without departing from the scope of the concept underlying the invention. Any reference numbers in the attached claims are provided to facilitate reading of the claims with reference to the description and the drawing, and do not limit the scope of the protection represented by the claims.

1. A package for tissue paper products, such as toilet rolls, kitchen paper rolls, packs of disposable serviettes and similar, comprising at least one external wrapping sheet which encloses said products, characterised in that said sheet forms at least two semi-packages that can be separated from each other.

2. Package as claimed in claim 1, characterised in that said sheet consists of a sealable plastic film.

3. Package as claimed in claim 1 or 2, characterised in that said at least two semi-packages are adjacent and joined along a tear line of said sheet.

4. Package as claimed in claim 3, characterised in that said tear line is formed by incision lines.

5. Package as claimed in claim 3 or 4, characterised in that said tear line is positioned between two seal lines cooperating in the formation of two adjacent semi-packages.

6. Package as claimed in one or more of the preceding claims, characterised in that it comprises at least one handle.

7. Package as claimed in one or more of the preceding claims, characterised in that it comprises at least one handle for each of said at least two semi-packages.

8. Package as claimed in claim 7, characterised in that it comprises two handles, formed along two opposite sides of said package, said at least two semi-packages being separable along a tear line running approximately parallel to said two opposite sides.

9. Package as claimed in claim 7, characterised in that said handles are arranged on the same side of the package and said tear line which divides said at least two semi-packages develops approximately orthogonal to said side, along which said handles are positioned.

10. Package as claimed in one or more of the preceding claims, characterised in that it comprises a handle for gripping and handling the package prior to separation of the semi-packages.

11. Package as claimed in one or more of the preceding claims, characterised in that said products are rolls of tissue paper. 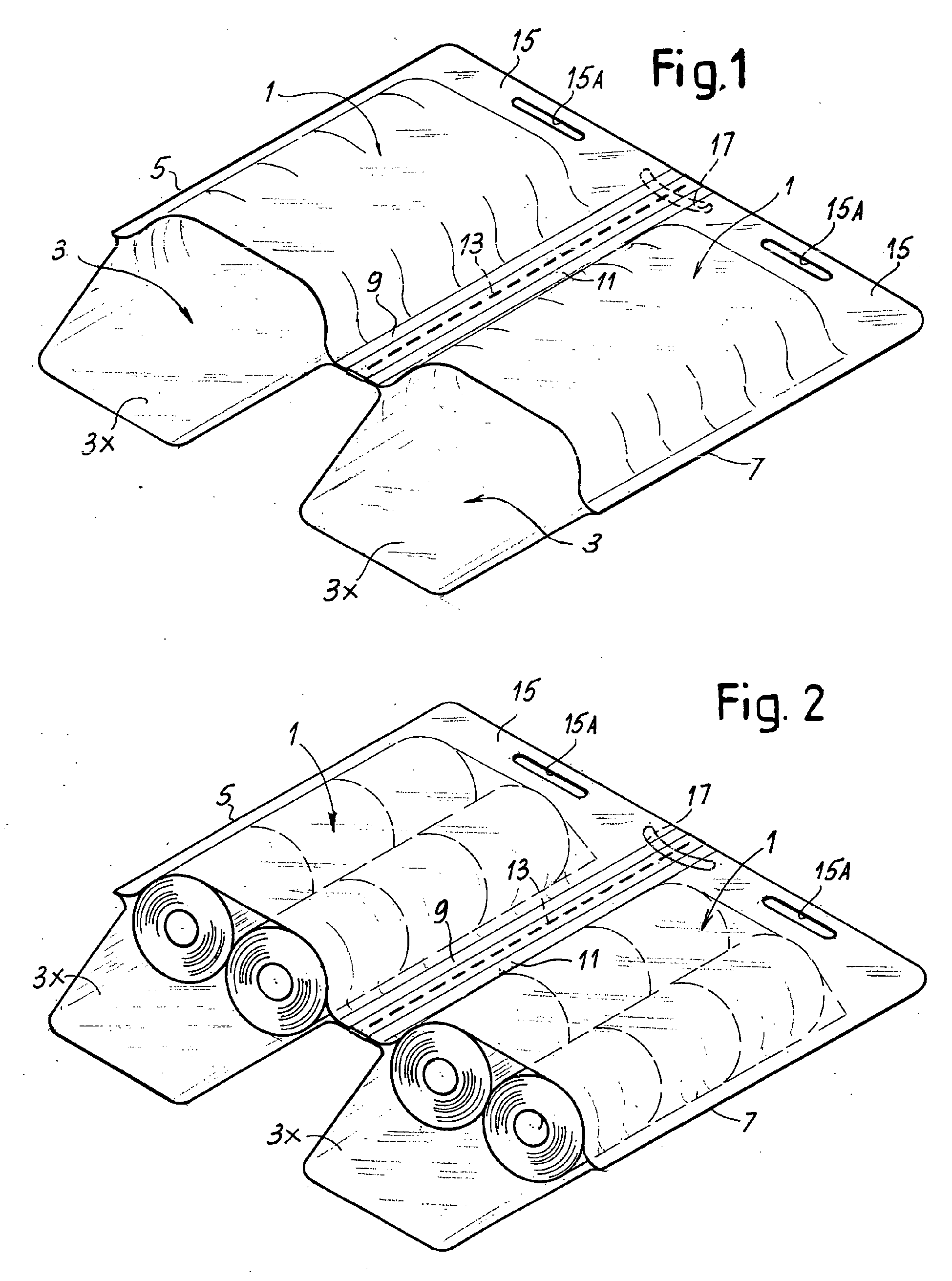 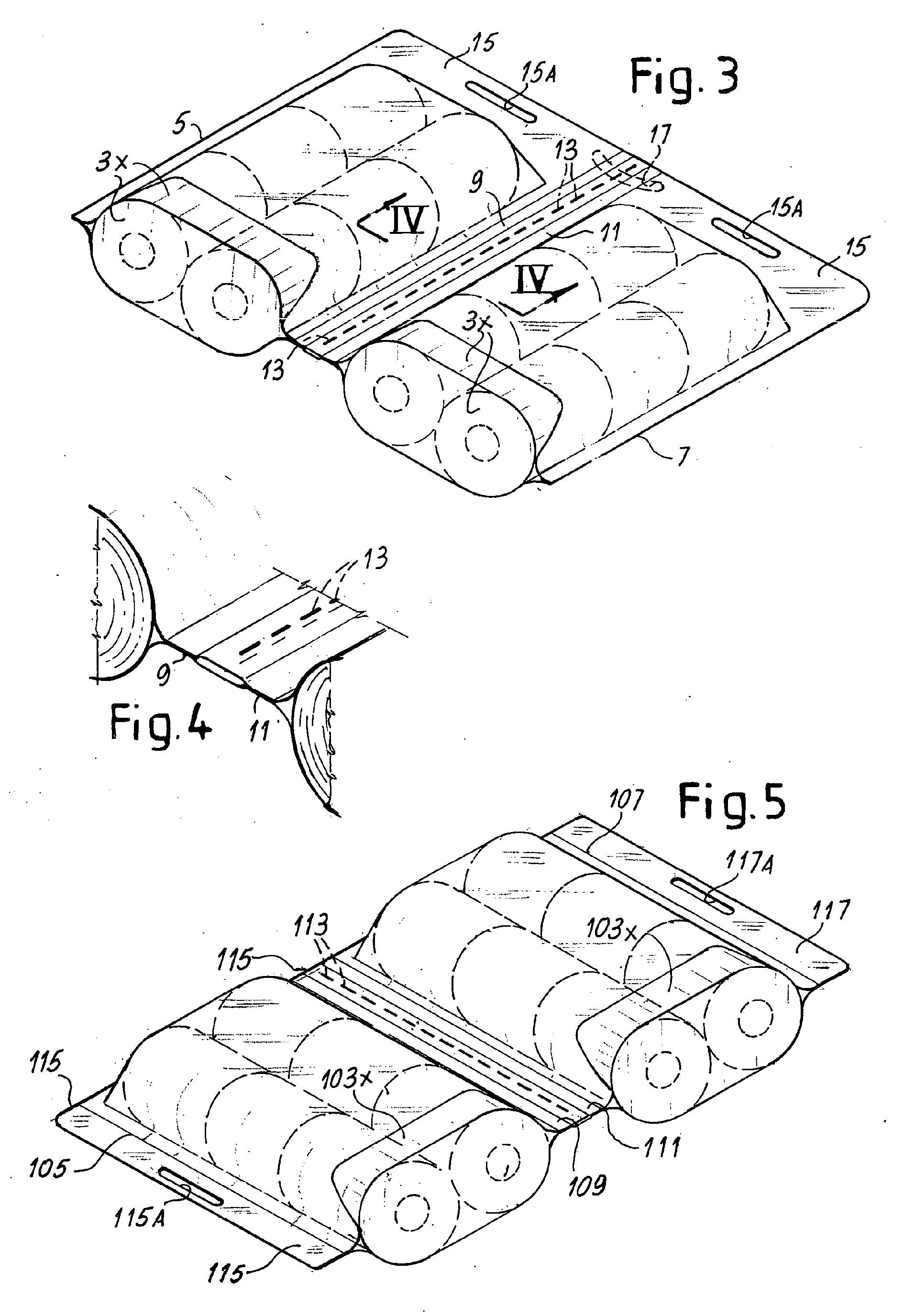 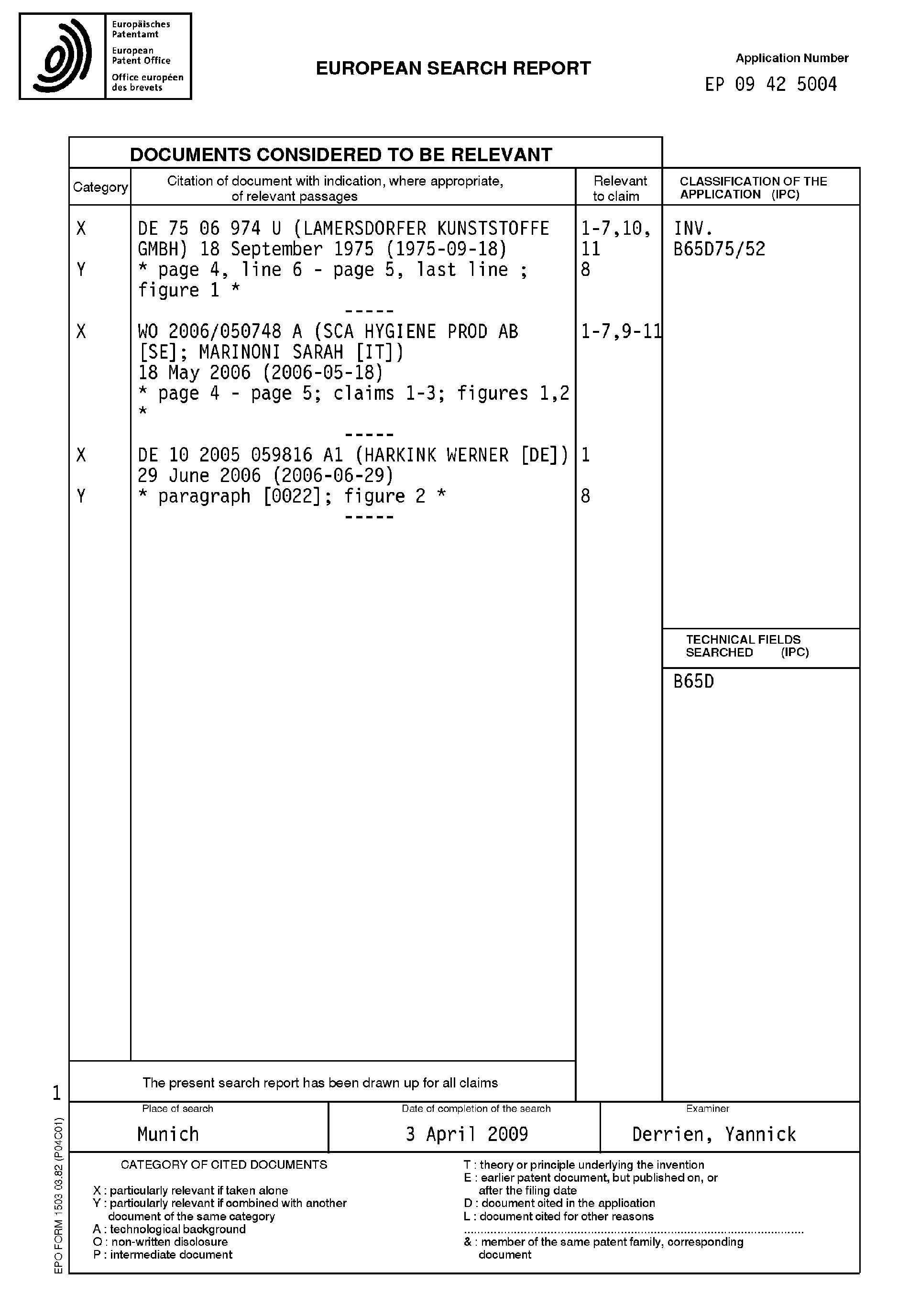 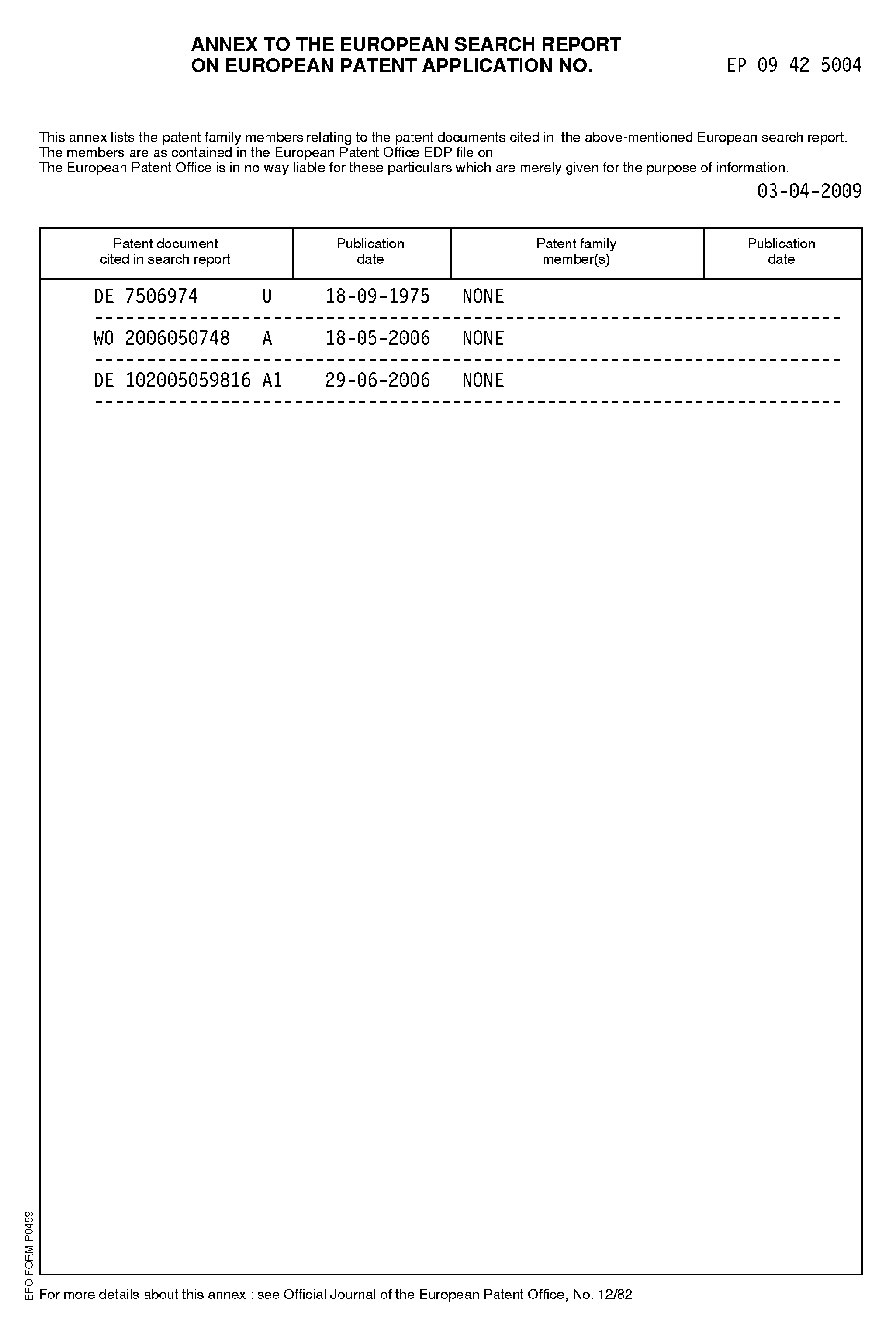