Fig. 1 is a longitudinal sectional view of a device according to the present invention;

Fig. 2 is a longitudinal sectional view of the device of Fig. 1, shown during the final step of infusing the maintenance treatment liquids into a lumen of a catheter with which it is used;

Fig. 3 is a longitudinal sectional view of the device of Fig. 1 after infusion has been completed;

Fig. 4 is a view of a portion of the device of Figs. 1 to 3 with a metering section for adjusting the amount of liquid to be infused in a first setting, applied thereto;

Fig. 5 is a view of a the device portion of Fig. 4 illustrating the metering section in a second setting, related to a smaller amount of liquid to be infused;

Fig. 6 is a the device portion of Figs. 4 and 5 taken at right angles thereto, of the metering section;

Fig. 7 is a view of another embodiment of the inventive device having dual plungers and compartments in parallel and having a common duct access.

a support structure (15) having at least two separate compartments (11,12;111,112) for containing respective liquids;

a duct (17) extending through the distal wall enabling liquid to exit the at least two compartments;

2. The device (10,110) of claim 1, wherein the device is adapted to infuse the at least two liquids sequentially in a preselected order into the liquid-receiving device (C).

7. The device (10,110) of claim 1, wherein the distal wall (21,121) includes a needle (22,122) affixed thereto disposed in the duct (17) and protruding distally therefrom a short distance for penetrating the transverse resealable membrane (31) of the closure plug (13) to establish fluid communication between the device and the liquid-receiving device (C), while a distal tip of the needle (22,122) remains recessed within the support structure's distal end.

9. The device (10) of claim 8, wherein the metering section (32) comprises an internally threaded ring (33) screwed onto the proximal end of a said plunger (16), the ring defining an adjustable stroke limit (34) for the plunger (16) by abutting a proximal end of the support structure (15), graphic references (35) that indicate the amount of liquid that can be infused being disposed on the ring and the plunger, and the ring (33) being selectively rotatable to select the desired liquid amount, whereby the ring raises or lowers the stroke limit (34) of the plunger by a distance associated with the selected amount indicated by the graphic references (35) that in turn limits the amount of liquid expressed from the one of the compartments (11,12).

10. The device (110) of claim 1, wherein the support structure defines a chamber (19) containing the at least two compartments (111,112), and the at least two compartments are aligned in parallel, each compartment having a respective plunger (116a,116b) for expressing liquid therefrom, and the support structure providing a common access to the duct for liquid from each compartment (111,112) to exit the device (110) for entering the liquid-receiving device (C). 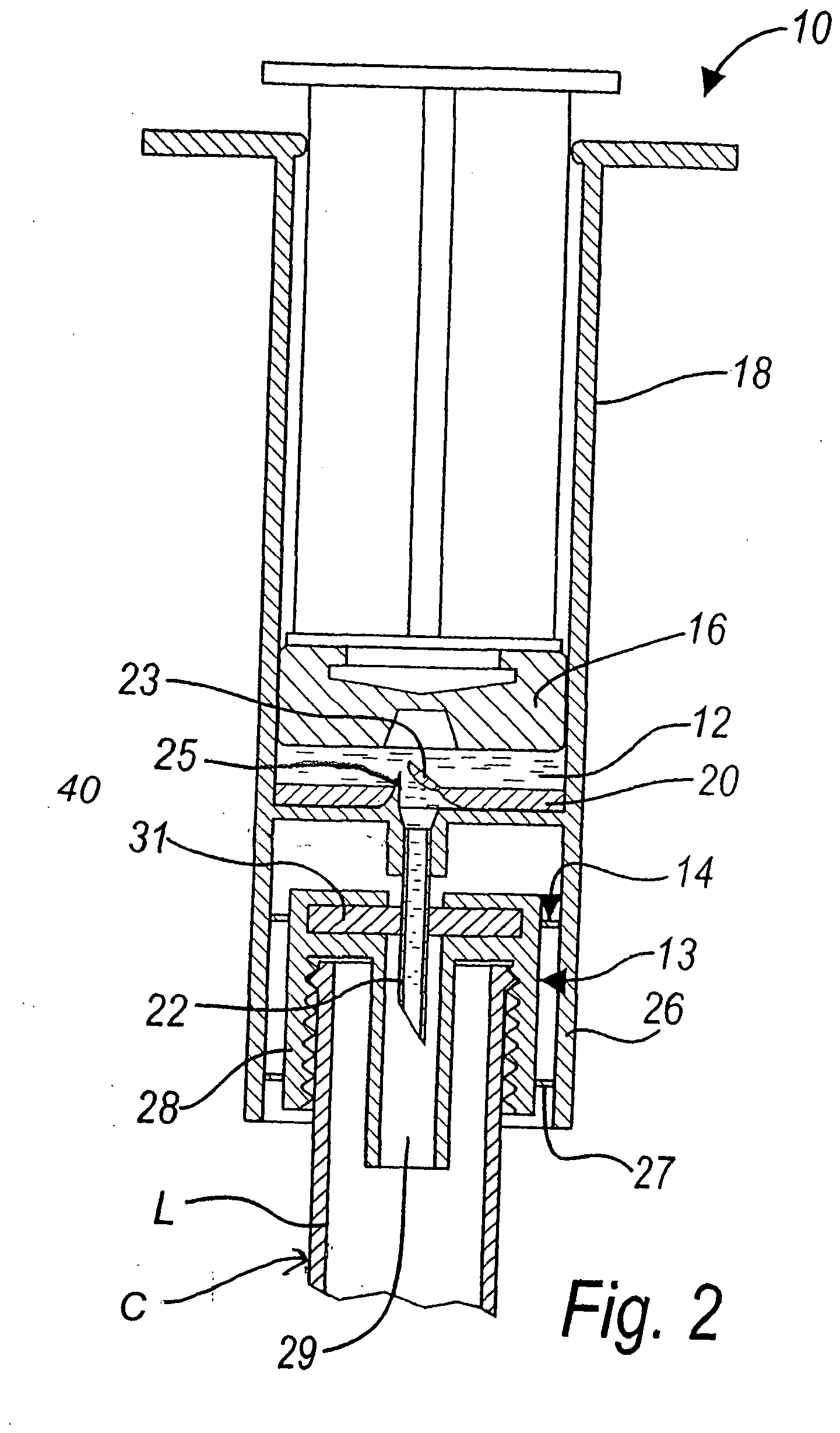 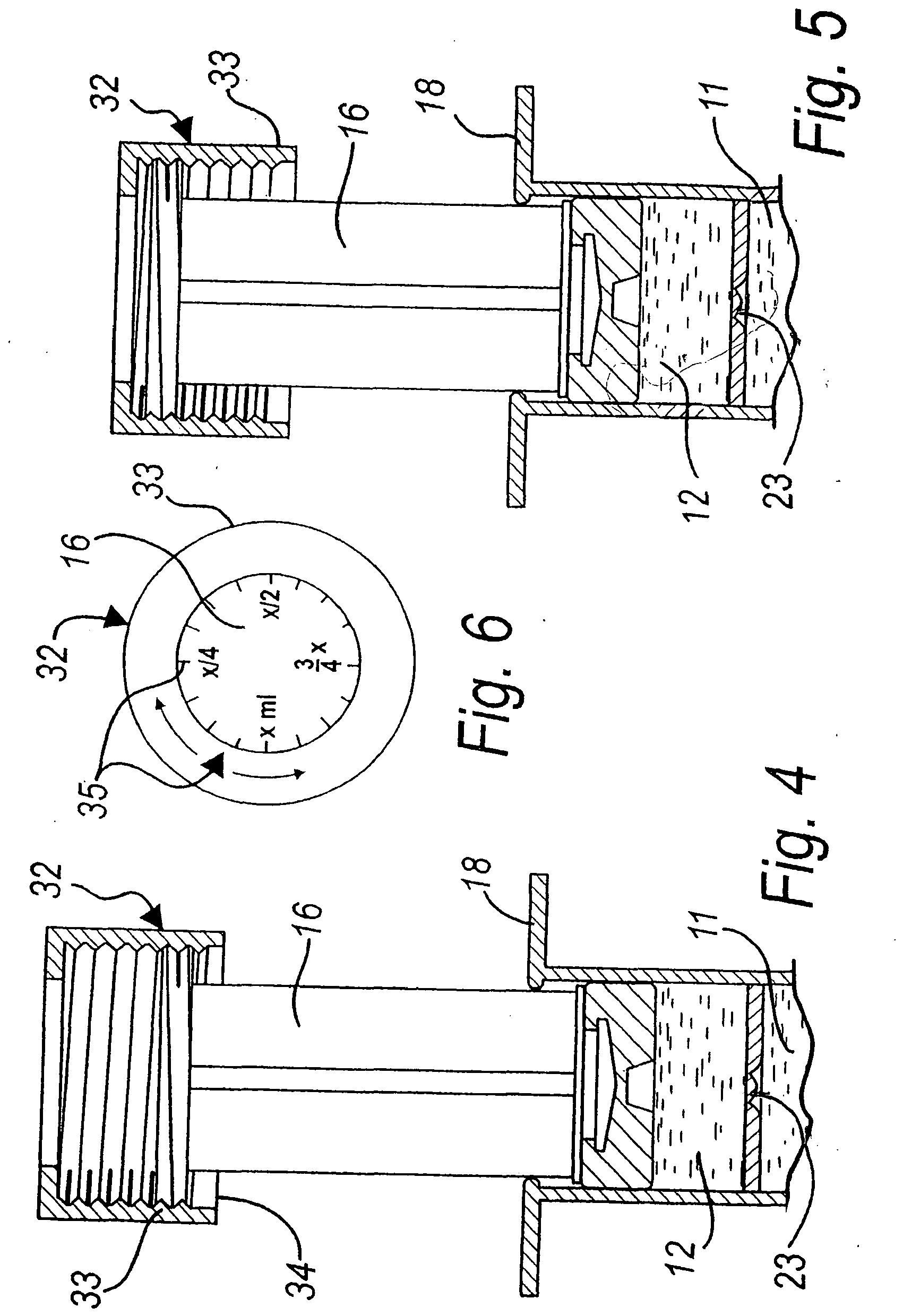 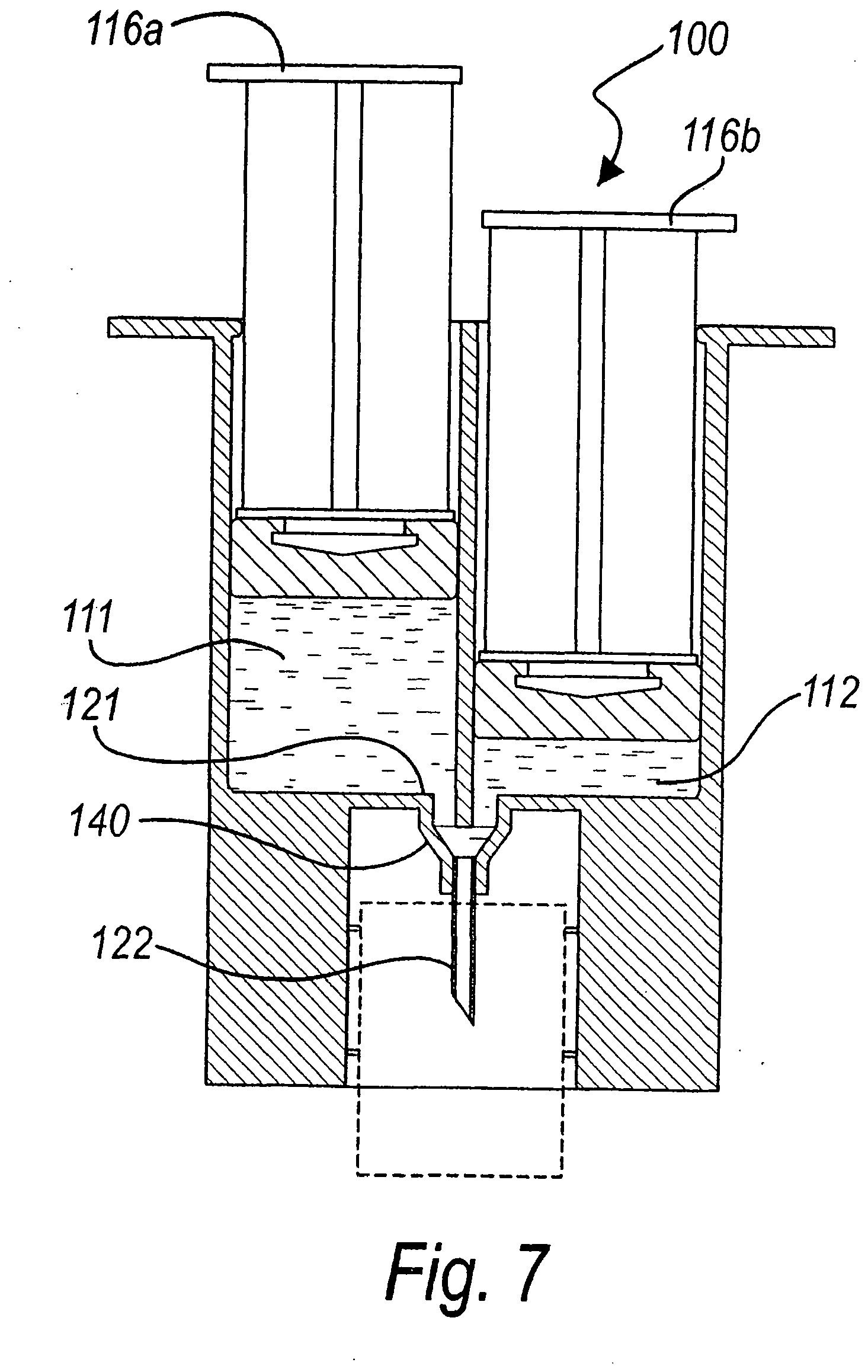