[0001] There is a growing number of drugs and vaccines for which the most effective, or most convenient method of administration is by intranasal delivery. This has led to the development of dosing devices for spray into the nose. These devices must deliver a precise dosage amount and it is important to deliver the dose in a way that the drug is absorbed in the nasal cavity and does not enter the back of the throat or the lungs.
[0002] Another issue that arises with intranasal drug delivery devices is the potential for abuse. Many drugs with a substantial potential for abuse are sprayed or snorted into the nose by drug abusers. One aspect of intranasal device design, therefore, is to prevent the re-use or re-tasking of a used drug intranasal device. A powder dispenser device described in U.S. Patent No. 5,683,361 provides a chamber with a powdery drug in which the chamber has a penetrable membrane enclosing either end. To dispense the drug, a plunger and piston are pressed against the lower end of the drug chamber, forcing it against a penetrating device connected to the dispensing nozzle and thus breaking the upper membrane. As the piston is depressed further, the lower membrane is penetrated by a lower penetration device, thus allowing the pressurized air above the piston to enter the drug chamber and expel the drug through the nozzle. This device requires that the air above the piston must be sterilized as well as the drug containing chamber, thus requiring sterilization of the entire device and secondary packaging. Another single dose dispenser is described in U.S. 5,307,953. This device also includes a plunger and a sealed drug containing chamber. A stainless steel needle is provided that communicates with the outlet nozzle. As the plunger is pressed by a user, the drug chamber is forced against the needle, which penetrates a membrane that seals the drug chamber. As the piston is pressed further, the drug is forced through the needle and out the nozzle.
[0003] U.S. 5,944,222 describes a dosing device in which a piston forces a drug containing chamber against a needle for release through the nozzle. The described device also includes a material bridge between the piston and the casing. By examining this bridge, one can determine if the piston has been previously pressed into the cylinder. This makes a tamperevident closure so that it is apparent when someone is attempting to re-use a spent device.
[0004] A similar device with a piston and penetrating needle is described in U.S. 6,708,846. This device can also be placed in a reusable activating unit. The unit includes a ram which is adjustable with threads on the ram and on a sleeve containing the ram. During use of this device, a dispensing device is placed in the actuating unit and the ram is threaded into the sleeve so that the head of the ram rests against the piston of the dispensing device. A release detent holds the ram in place and prevents unwanted penetration of the drug compartment. The ram is also pressed against a compressed spring. Pressing the release button releases the detent, allowing the ram to push the piston and discharge the drug. A knob is then turned to reset the actuating device so it can receive another dispensing device for reuse.
[0005] Another dispenser, described in U.S. 6,725,857 is designed to dispense multiple doses of a drug, and is also designed for one-handed operation. Multiple drug doses are contained in storage chambers on a blister strip in the form of a drum store so that the strip is contained in the body of the device and is moved along a wheel as each dose is dispensed. An actuating lever is pressed against a spring and when the spring is compressed, a lock holding a carrier plate is released. The compressed spring then drives the plate and attached slides that push the wheel so that the next dose chamber is aligned with the punch, the punch is moved down into the chamber, puncturing the enclosing film, and air pressure created within the body of the device expels the drug from the chamber. The user then returns the actuating lever to the original position and the process can be repeated for the next dose. US-2006/237009, US-2006/169278 and US-2006/157053 relate to further apparatus for dispensing substances.

[0037] The following drawings form part of the present specification and are included to further demonstrate certain aspects of the present invention. The invention may be better understood by reference to one or more of these drawings in combination with the detailed description of specific embodiments presented herein.

Fig. 2A-2C are different view of a device as shown in Fig. 1A-C in a ready mode.

Fig. 3A-C are different views of a device as shown in Fig. 1A-C in fired mode.

Fig. 4. is a cross section view of a device as shown in Fig. 1A-C in storage mode.

Fig. 5. is a cross section view of a device as shown in Fig. 2A-C in ready mode.

Fig. 6 is a cross section view of a device as shown in Fig. 2A-C during discharge.

Fig. 7 is a cross section view of a device as shown in Fig. 3 A-C in discharged/locked mode.

Fig. 8 is a cross section view of a device with an internally pierced dosage form.

Fig. 9 is a cross section view of a device with an internally pierced dosage form in discharged mode.

Fig. 18 is a cross section view of a positive displacement dosage form.

Fig. 19 is a cross section view of a positive displacement dosage form during discharge.

Fig. 20 is a cross section view of a positive displacement dosage form discharged.

Fig. 22 is a cross section view of a piercing nozzle.

Fig. 23 is a cross section view of an internally pierced dosage form.

Fig. 24 is a perspective view of a Bi-dose push button dispenser in a first position.

Fig. 25 is a perspective view of a rotatable tip used on the device as shown in Fig. 24.

Fig. 26 is a perspective view of a Bi-dose push button dispenser in a second position.

Fig. 32 is a cross section view of a dual medication blister dosage form.

Fig. 33 is a cross section view of a dual medication blister dosage form in mixing mode.

Fig. 34 is a cross section view of a dual medication blister dosage form ready to dispense.

Figs. 35-38 are schematic view of a strip-type multiple medication dosage form during the steps of moving a dose into position and discharging the dose.

Fig. 63 is a cross section of a marking tip assembly.

Fig. 64 is a perspective view of a marking tip assembly.

Fig. 65 is a marking tip assembly ready to be installed on a dispensing device.

Fig. 66 is a marking tip assembly ready to dispense with a tip in place a dispensing device.

1. A device (90) for dispensing a predetermined quantity of fluid into the nasal passage of a user, said device comprising:

a body (91) comprising a nozzle end (33) designed for insertion into the nostril of a user;

a plunger (9) connected to the actuator;

a dosage form (80) comprising a piercable membrane (82) and containing the fluid (84); and

an activation knob (5) that is rotatable from a first position to a second position;

wherein operating the trigger causes the piercing mechanism to penetrate the dosage form and discharge the fluid through the discharge channel;

wherein the actuator (10) is a toggle mechanism that provides a mechanical advantage and the piercing mechanism is contained in the dosage form;

and wherein rotation of the toggle mechanism to the second position pushes the trigger device into an activated position;

a nozzle end designed for insertion into the nostril;

a dosage form comprising a piercable membrane and containing the fluid; and

3. The device as described in any preceding claim, comprising a safety mechanism comprising any of:

4. The device as described in any of the preceding claims, wherein the fluid comprises a medical composition in liquid or powdered form.

5. The device as described in claim 1, wherein the piercing mechanism comprises:

one or more inlet openings arranged to force one or more bends as the fluid flows into the internal channel;

a discharge outlet; and

features including steps, flutes, ribs, or a combination thereof on the internal surface to control the spray pattern and droplet size of a fluid forced to flow through the nozzle.

6. The device as described in claim 1, wherein the body of the device comprises one or more detent features to restrain the motion of the plunger until a predetermined force is applied to the plunger. 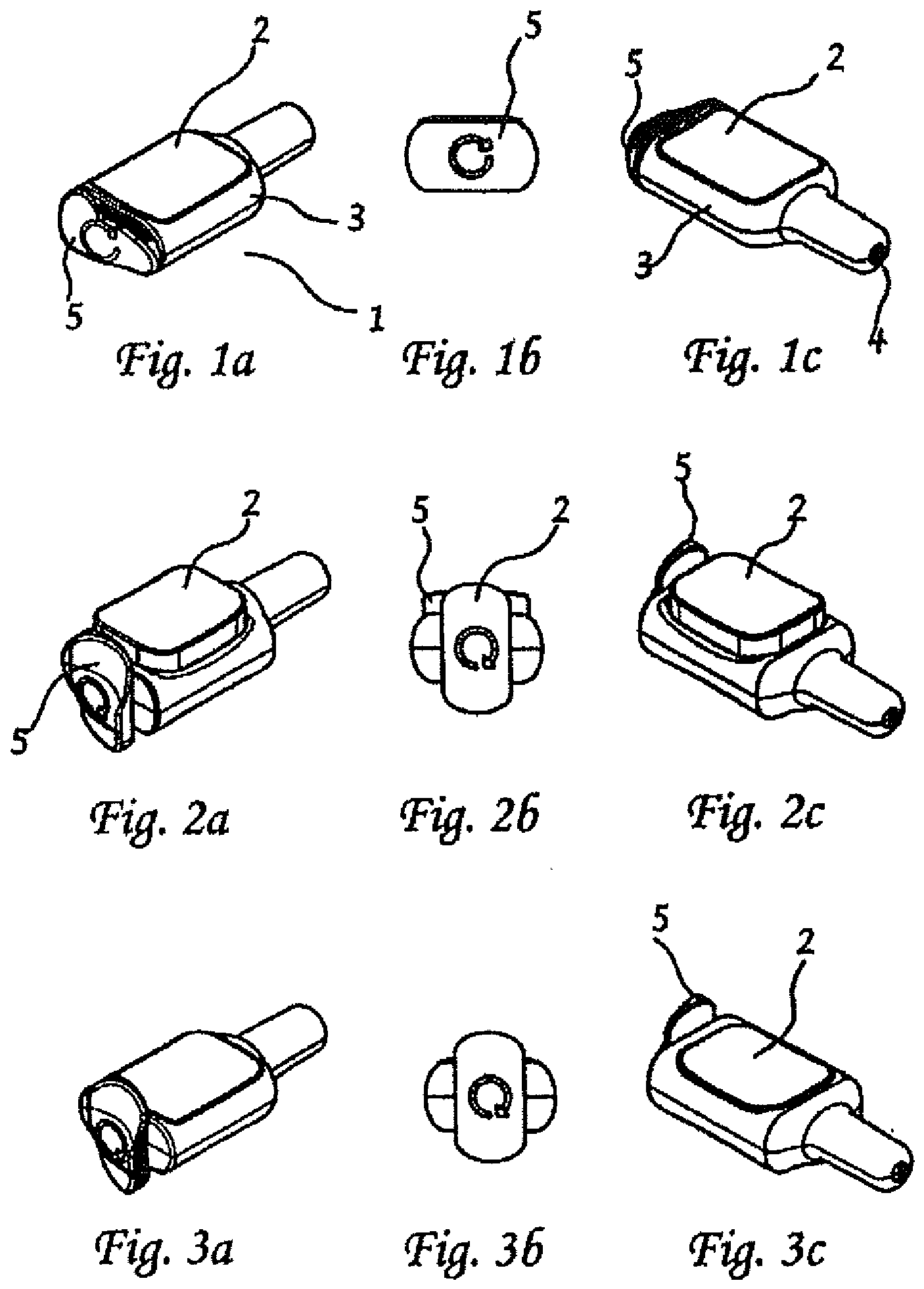 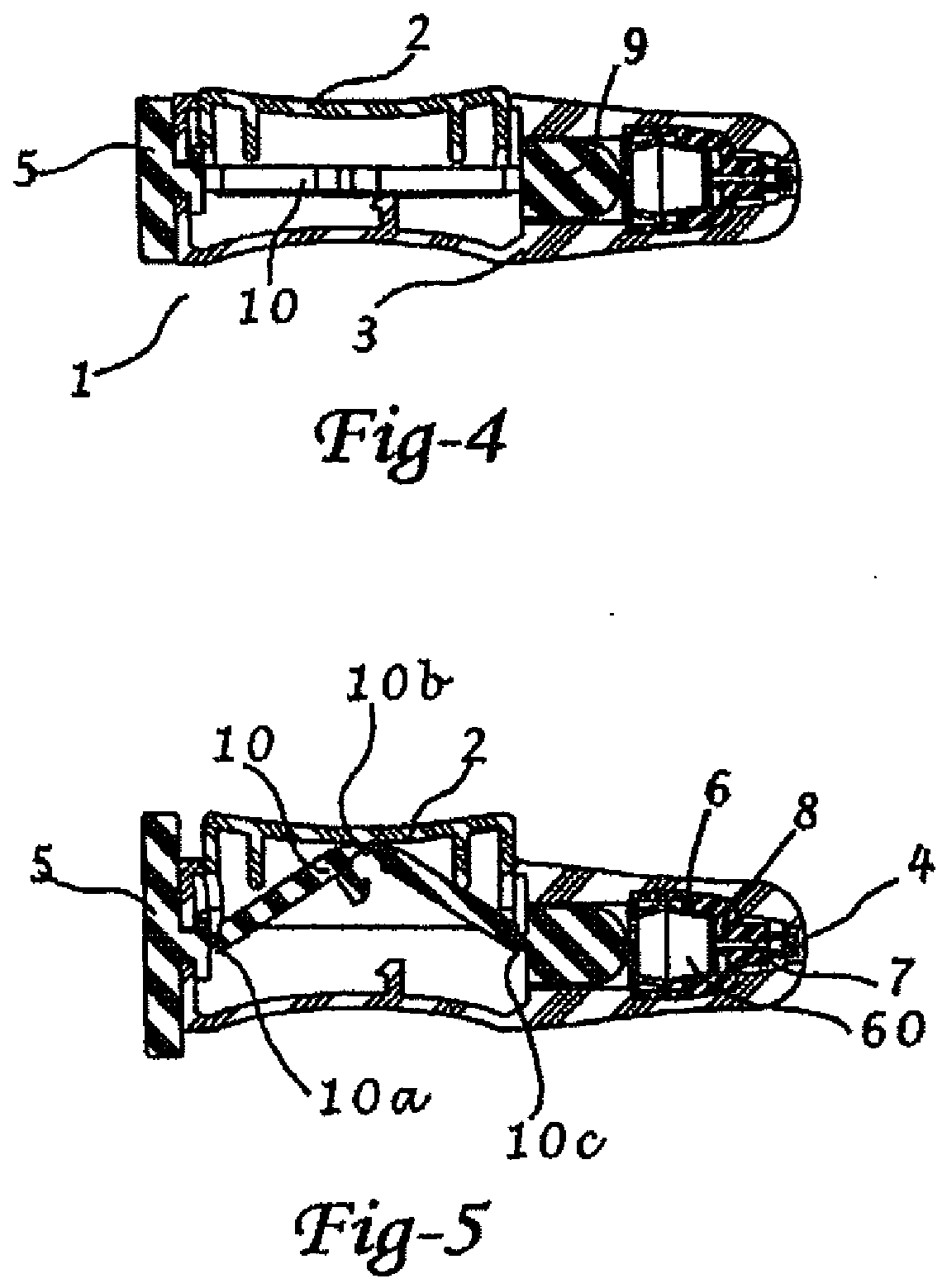 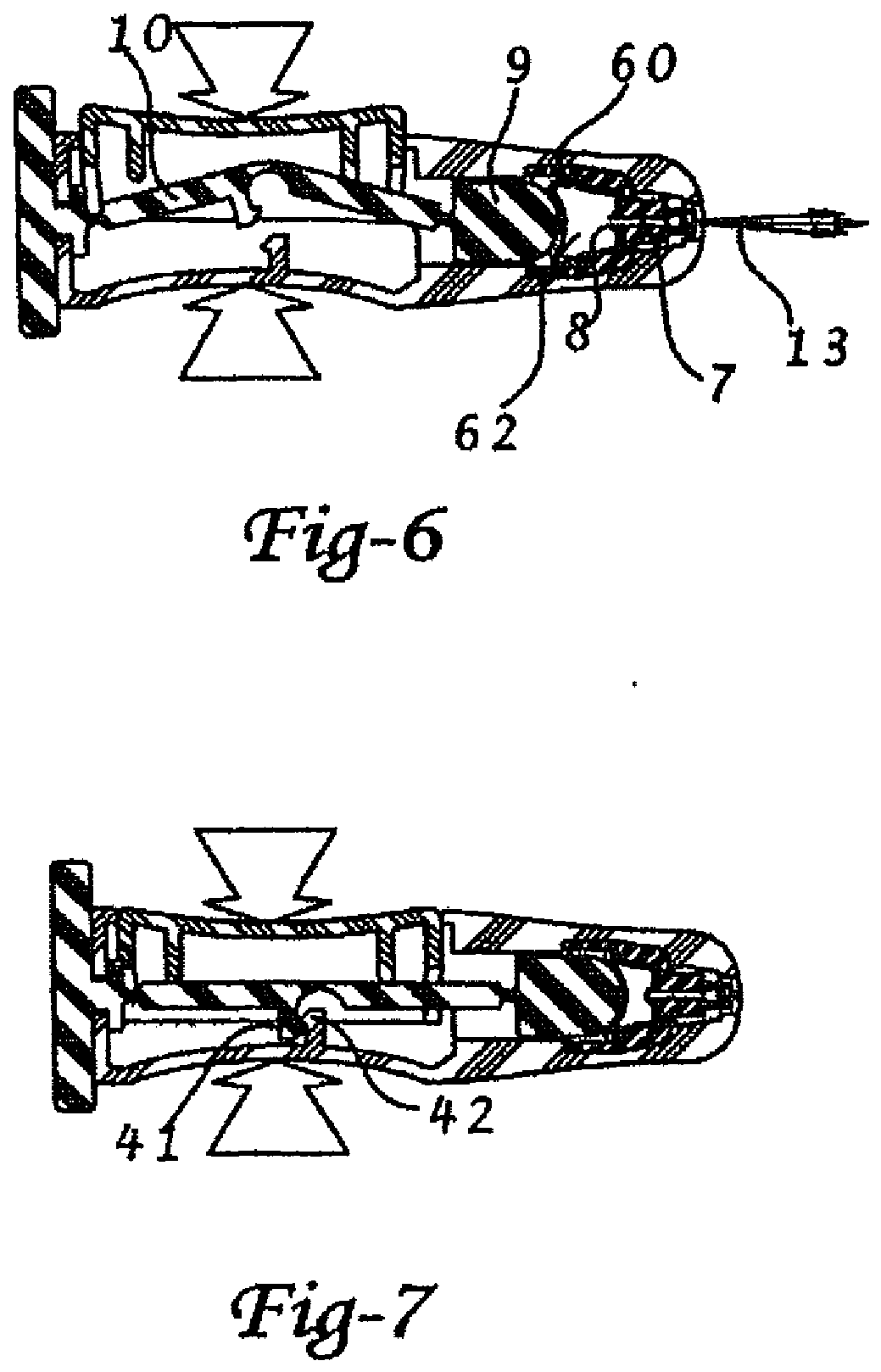 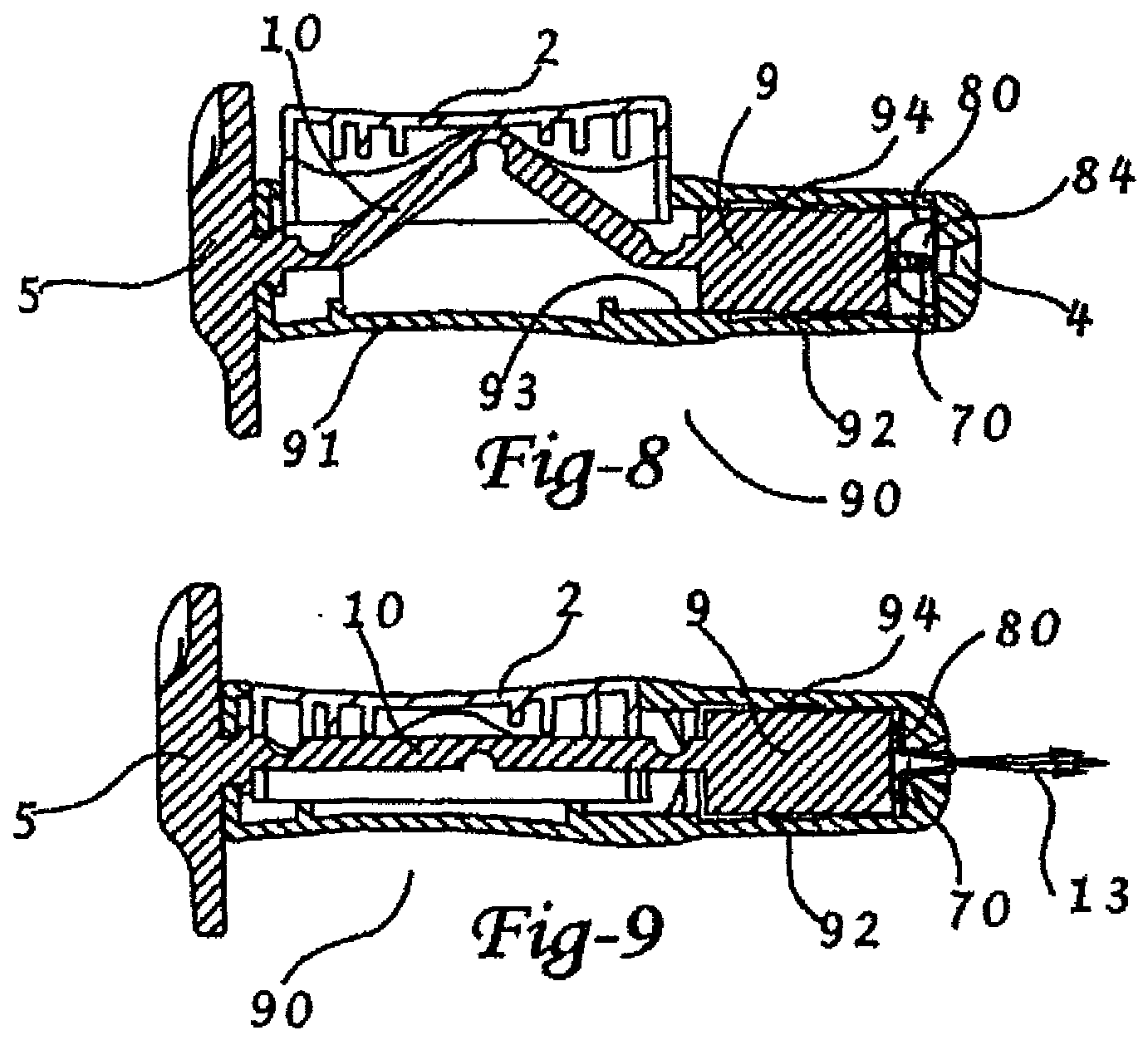 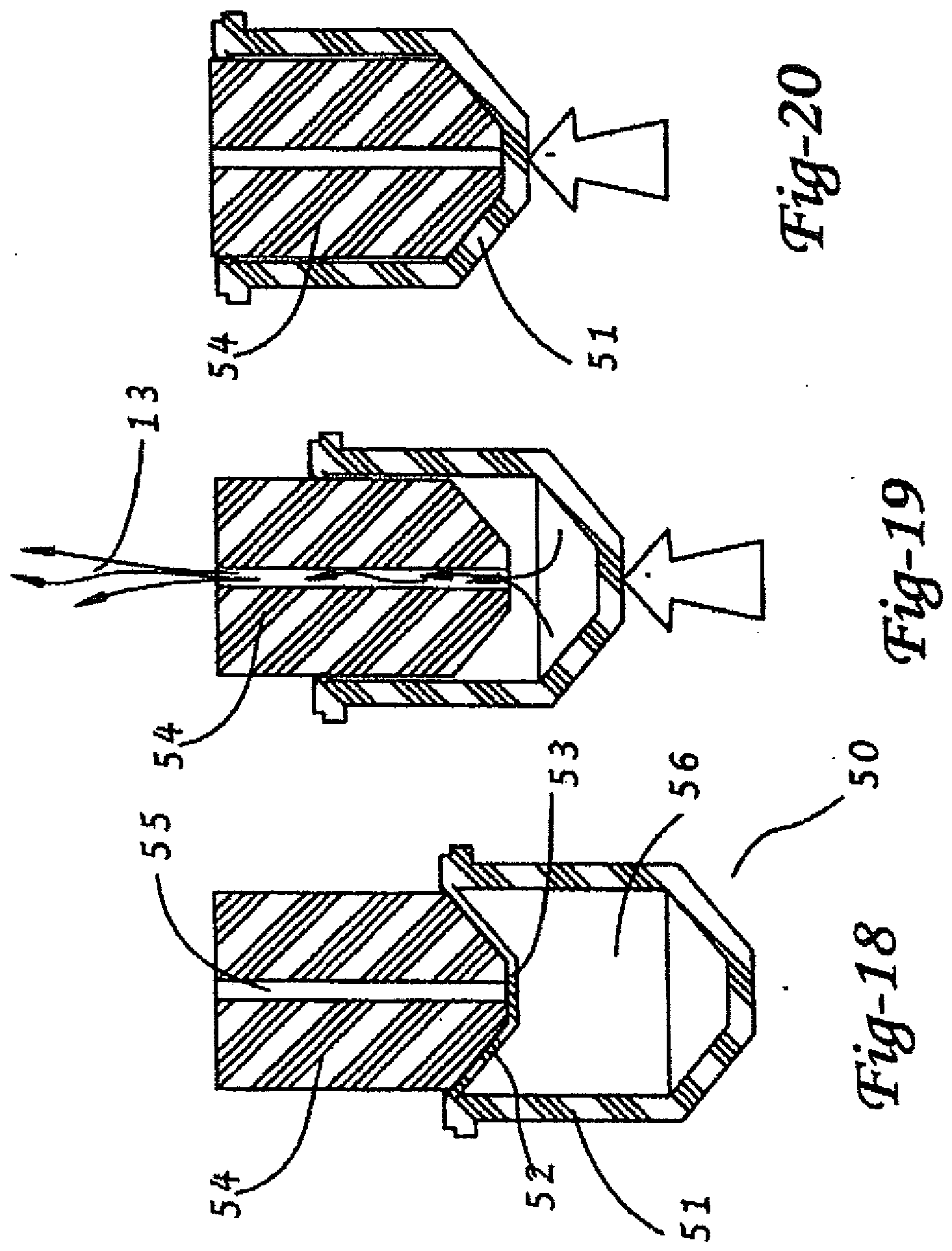 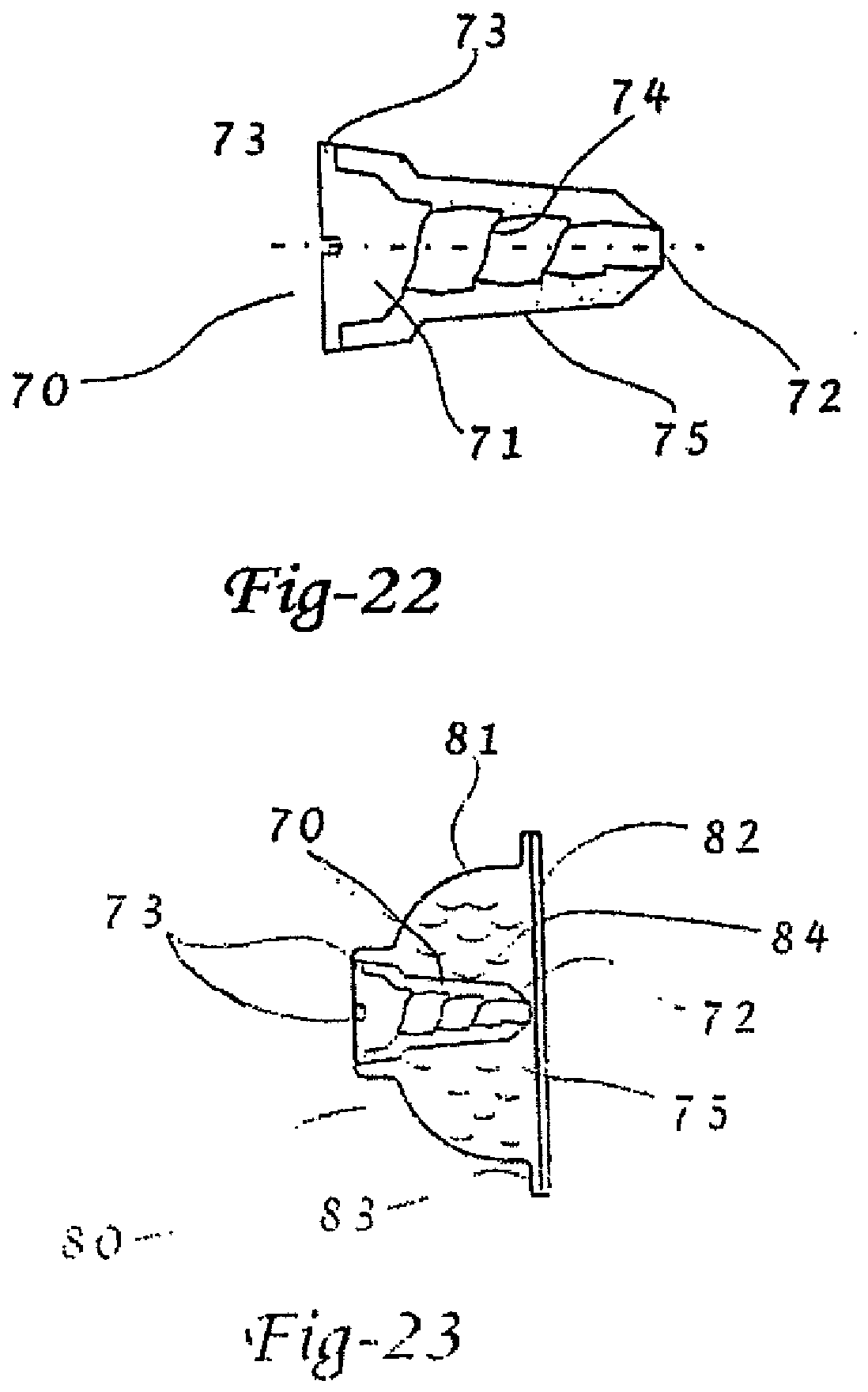 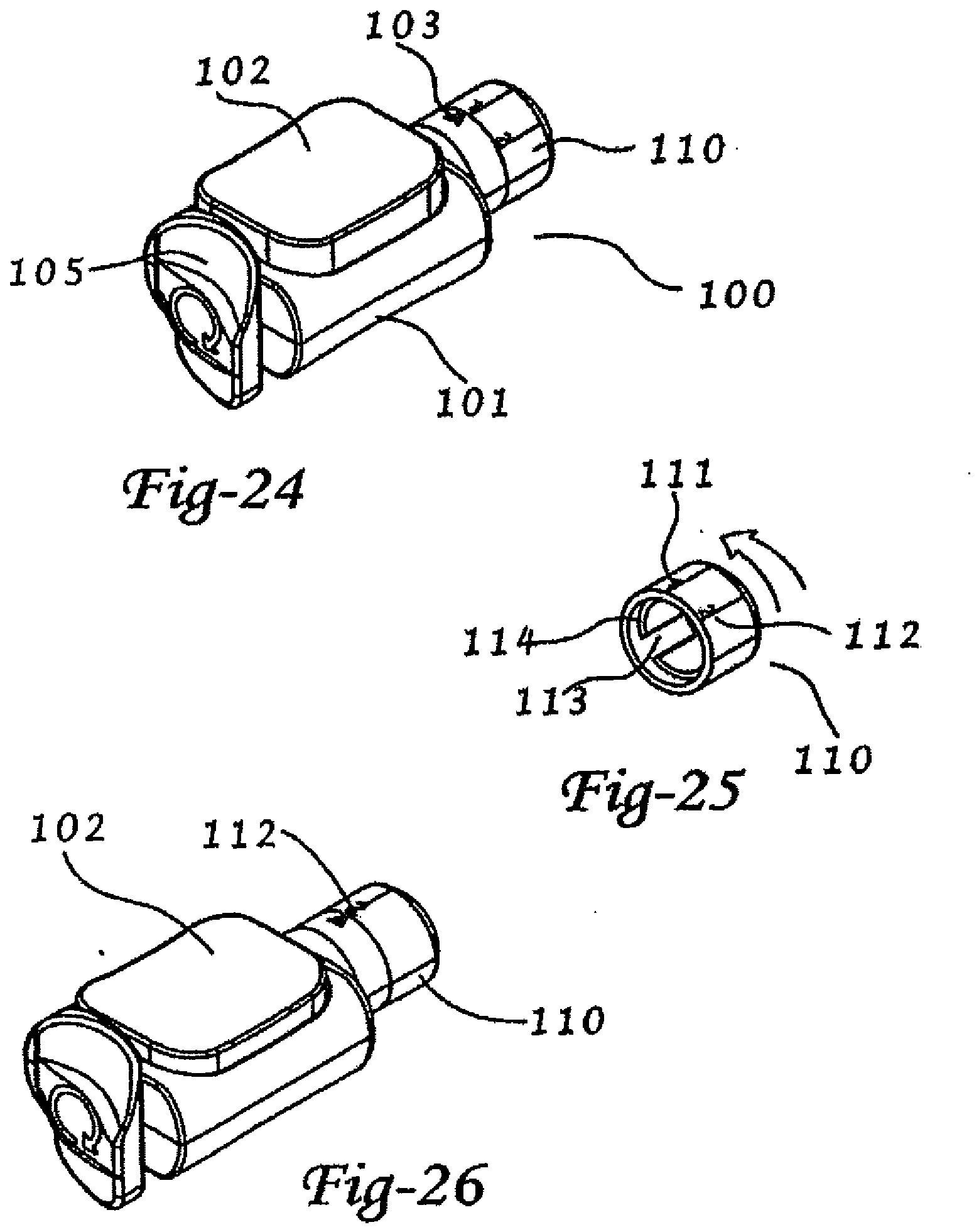 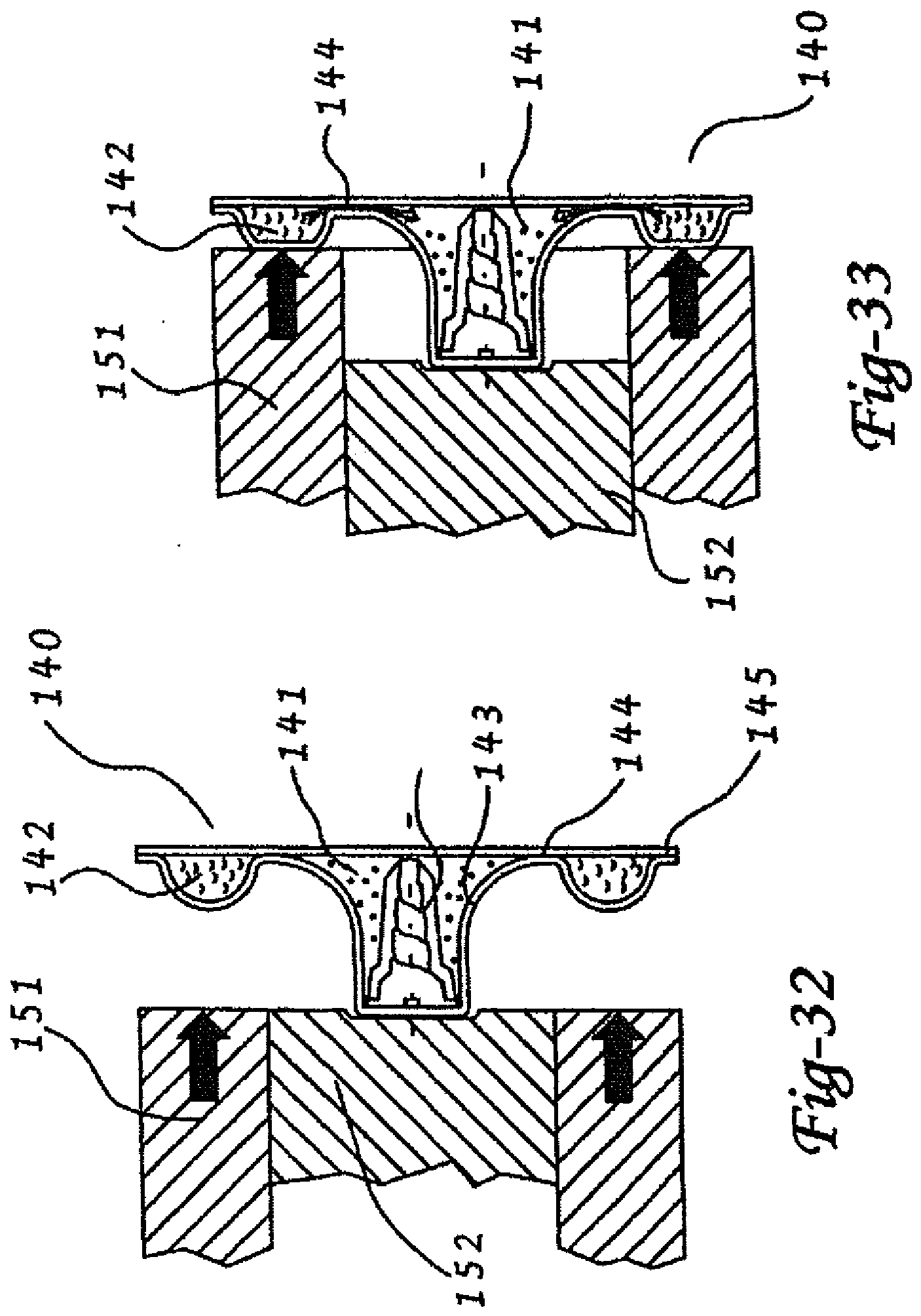 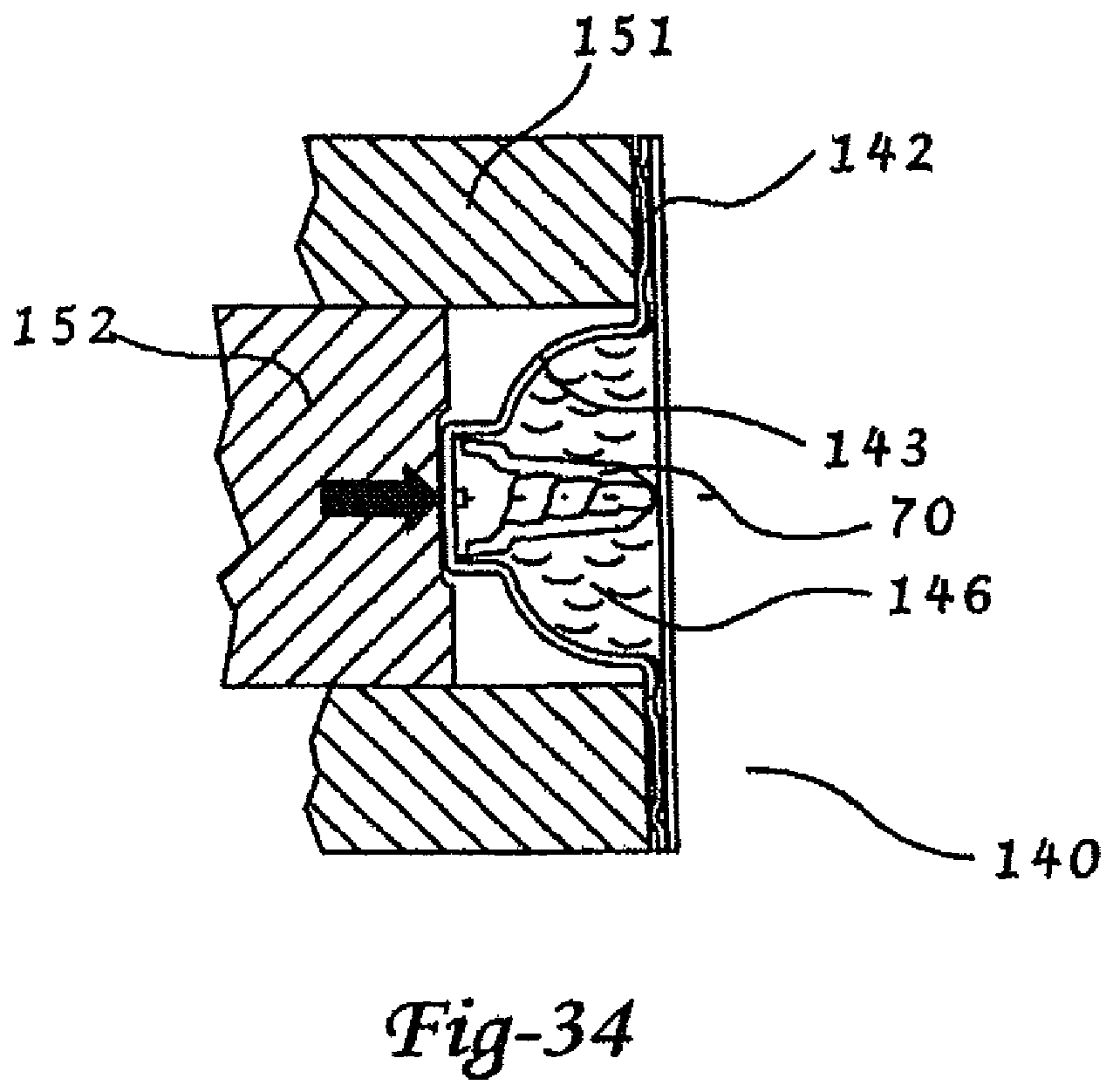 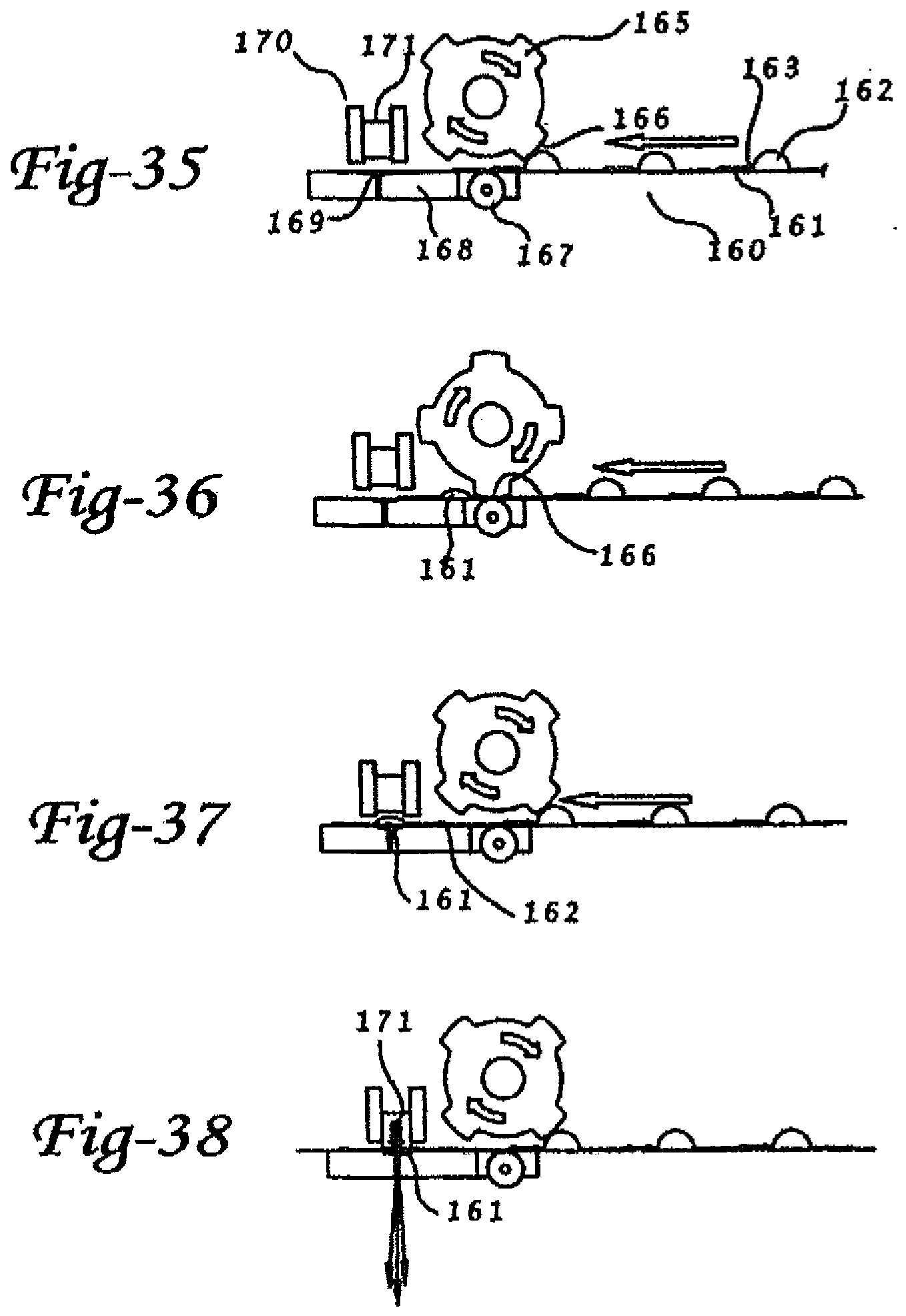 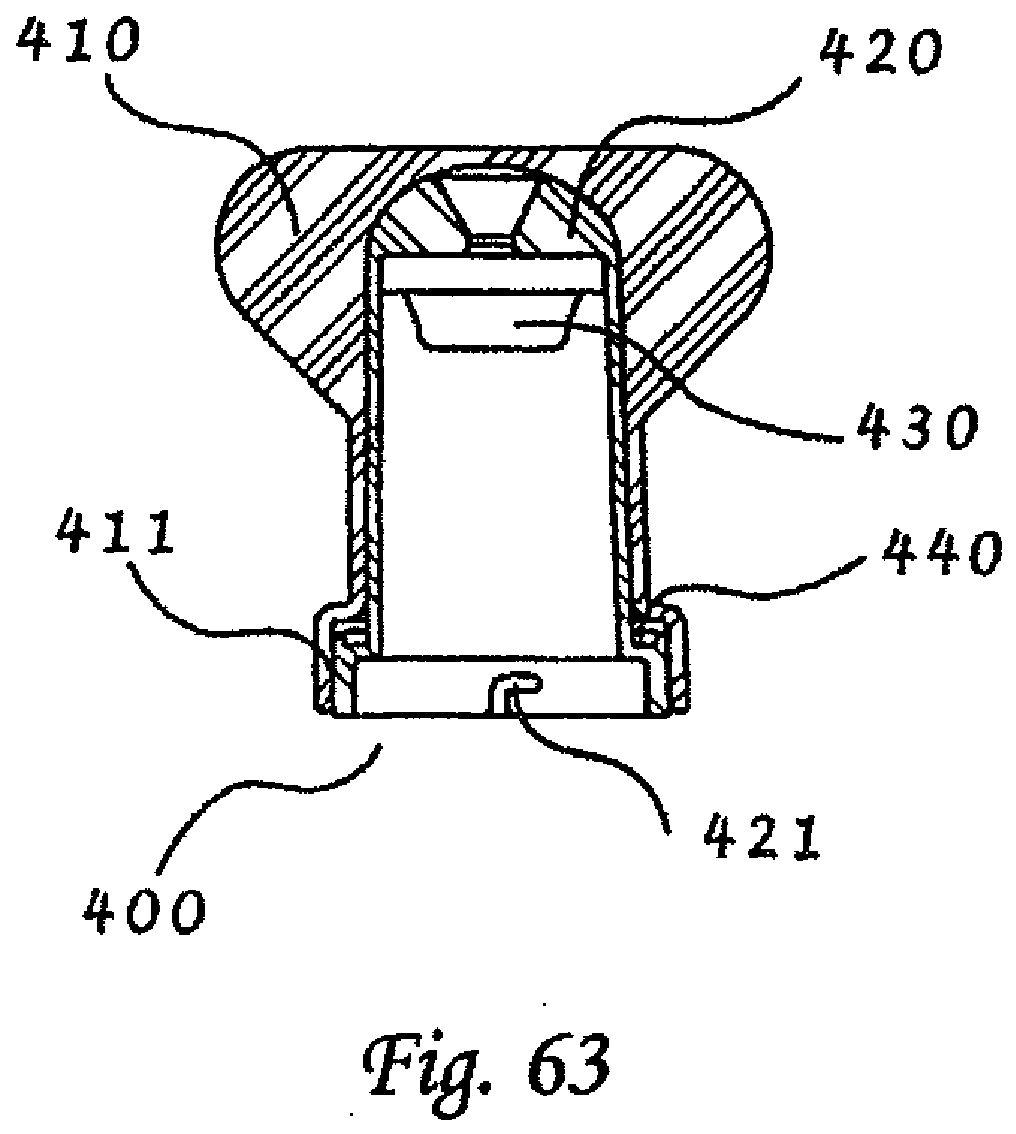 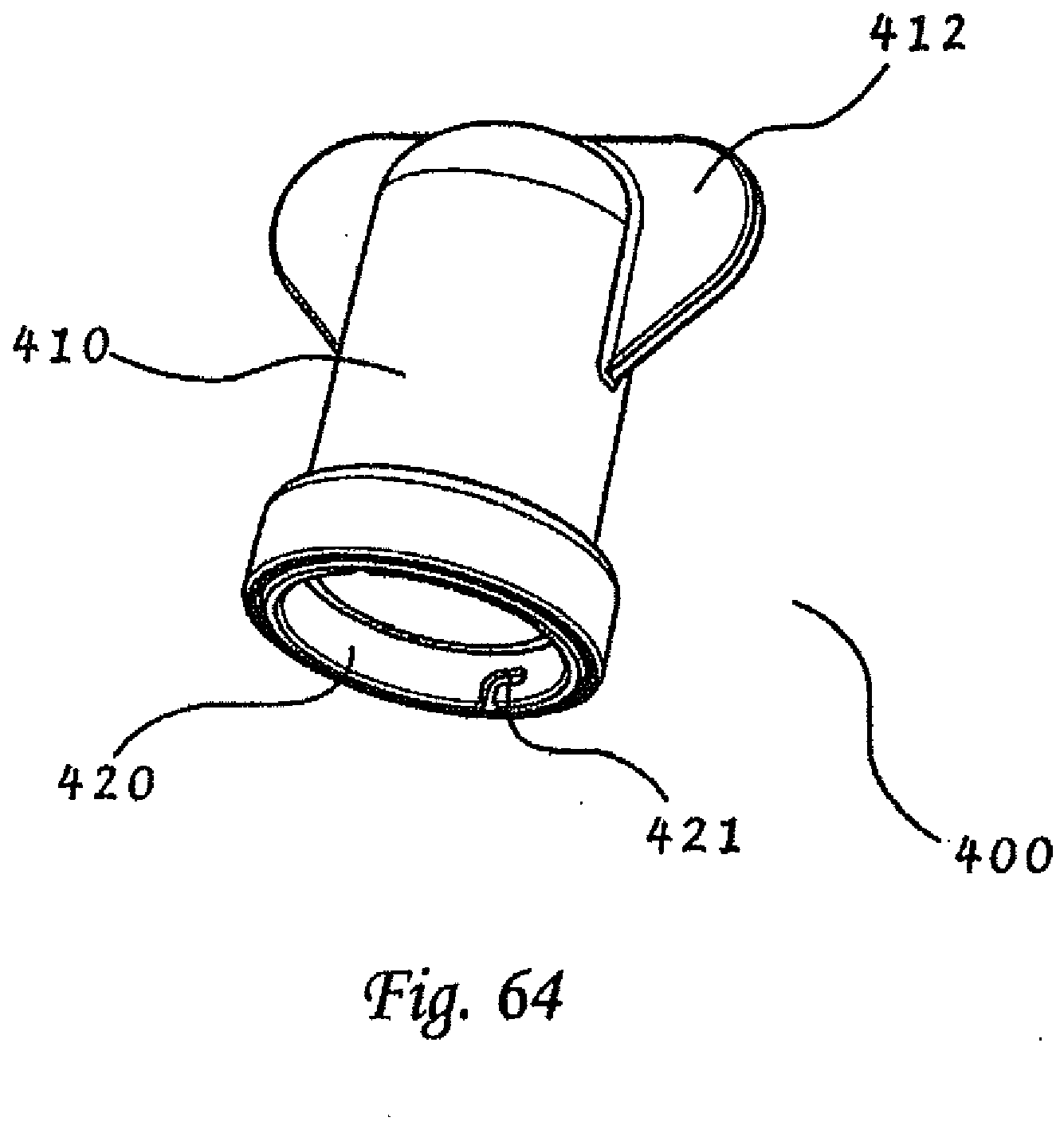 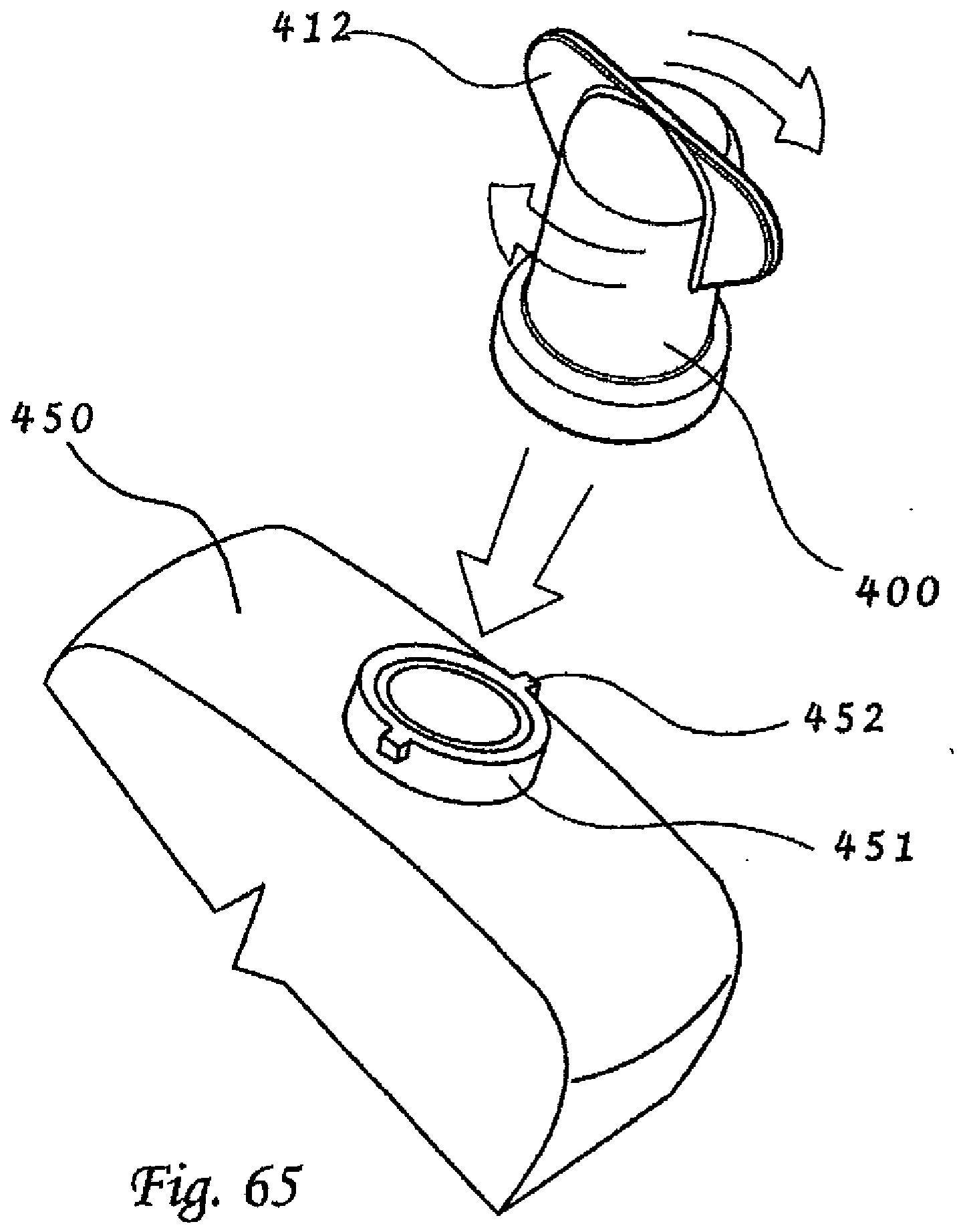 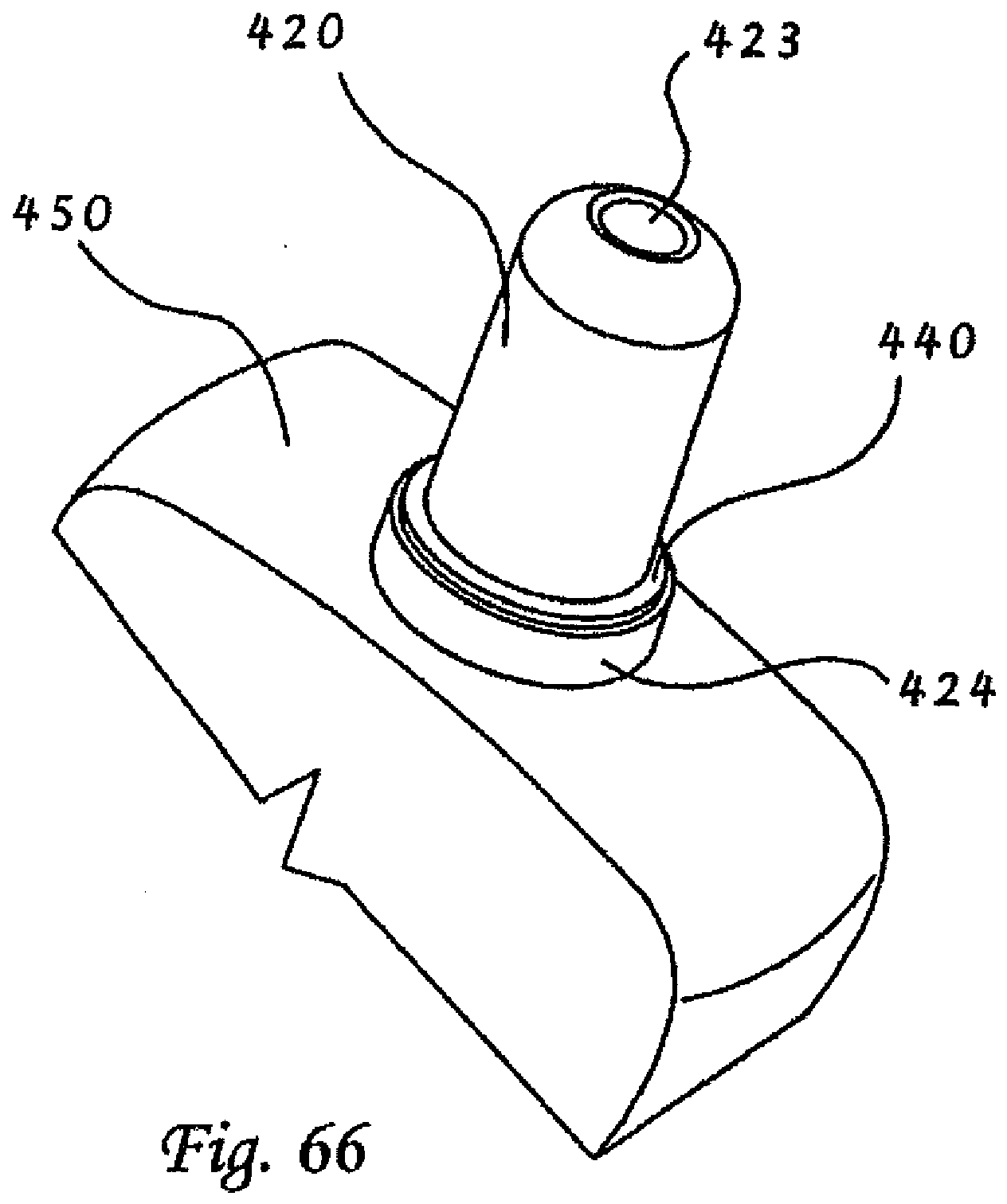