Purpose of the Invention:

[0001] More specifically the invention refers to a socket base for low voltage electrical circuits that are installed projecting from the wall, partition or similar where its thickness and/or installation requirements do not permit a flush fitting.

State of the Art:

[0002] Previously technical and regulatory requirements meant the production of non-flush fitting socket bases are formed by the socket base itself and a second piece occupying the front of the aforementioned base, superimposed onto it and held by clip mechanisms. These acted as a means of support and protection for the socket body itself. It also had an earth that was hidden with an outlet in the aforementioned second piece.
[0003] An example of the rules and one type of this non-flush fitting socket base is found in Spanish Utility Model no. 200400629 by Simon, S.A., which claims an additional element attached and fitted into a circular opening on the upper face. This forms the necessary extension to the base's body protecting its projecting parts, more specifically the formed metal contacts. This is made from a transparent material.
[0004] Therefore, up until now, conventional non-flush fitting socket bases contained two different parts manufactured separately. These two parts were joined by crimping which in particular increased the product's manufacturing costs without providing any substantial benefit, other than the fact that the two parts may be made from different material, for example the base being opaque and the earth housing being translucent for aesthetic purposes.

Scope of the Invention:

[0007] The base of the non-flush fitting socket in this invention includes a single solid body that may be any type or layout. Preferably the base will be prismatic or cylindrical extending from the front to another cylindrical or prismatic part, according to the design. This single piece is obtained by injecting a plastic material into the relevant mould.
[0008] Preferably the plastic material used in the manufacture of the non-flush fitting socket base in the invention will be polycarbonate. Different finishes may be selected for the different parts of the socket base for decorative or aesthetic purposes, for example different colours and/or different transparencies for the front section and for the remaining socket base.
[0009] In the prismatic section or the non-flush fitting socket base itself in the invention there are female contact mechanisms and their means of connection to different conductive phases. In the projection section of the base there is a set of ribs and slots in order to retain the earth and plug pins or male parts.
[0010] Advantageously, the non-flush fitting socket base in this invention eliminates the use of conventional methods of crimping between the base and the part. The latter includes an earth and protects the projecting elements from the base, such as the body of the plug in addition to the earth.
[0011] Therefore, increased rigidity and safety is achieved by manufacturing the socket base in one single part, because there are no joints between parts that may be broken, handled and extracted with the concomitant danger. This would be the case with the additional transparent housing and is made impossible in the set up for this invention.
[0012] Other details and characteristics shall be shown throughout the description below referring to drawings attached to this report which are shown for illustrative but not limiting purposes a practical embodiment of the invention.

Description of the figures:

Figure 1 is a top plan view of the non-flush fitting socket base (10).

Figure 2 is a lower plan view of the back of the base of the non-flush fitting socket base (10).

Figure 3 is a side top view of the non-flush fitting socket base (10).

Description of a preferred embodiment of the invention:

[0014] In one of the preferred set ups of this invention and as may be seen in Figure 3, the non-flush fitting socket base (10) is formed by a single body (11) in a plastic material made by injection moulding or similar techniques. The aforementioned single body (11) has two different parts: a first part or base element (21), from the upper section of which emerges a second part in the form of a cylindrical outward extension (12). This function of this is to act as a means of positioning the plug pins inside, called the male part, using the ribs (15) and rebates (16) located on the inner surface (14) of the cylindrical projection (12).
[0015] According to this specific set up, the base element (21) has a slightly prismatic shape, without its lower base and with a slightly curved upper base (22). On the circular surface of the upper base (22) there are holes (17a, 17b) for the plug pins to pass through, not shown in the figures, and an opening (18) to allow the socket base (10) to be attached to a wall, partition or similar where a flush fitting is not possible. See Figure 1.
[0016] Additionally, the cylindrical extension (12) has earth tabs (13) on the inside of the housing (20), as shown in Figures 1 and 2.
[0017] On the back of the socket base (10), and as shown in Figure 2, there are partitioning tracks (19a, 19b) to facilitate the retention of the female mechanisms, not shown in the Figures, which emerge perpendicular to the circular surface (22).
[0018] Both the method to position the plug pins and the method of housing the earth mechanisms described and stated in the attached figures, are completely conventional and they have been described to better understand the invention. However its layout and operational characteristics meet international approval standards and therefore must be considered to be technical imperatives.
[0019] The layout of the socket base does not define the invention and therefore the invention only has one claim for the manufacture of a single body (11) for the two different parts (21 and 12), which are currently manufactured separately. The invention specifies means of crimping to obtain its joint. Therefore the whole configuration of the slightly prismatic base part (21) without a lower base and with a slightly curved upper base (22), from which emerges the perpendicular cylindrical extension (12) has only one possible set up. Other configurations may be manufactured whenever this forms a single body (11) including means of protecting and positioning the male element and the aforementioned earth methods.
[0020] Having sufficiently described this invention using the Figures attached, it is easy to understand that any changes judged to be suitable may be made, whenever these changes do not alter of the essence of the invention summarised in the following claims.

1. - "IMPROVED NON-FLUSH FITTING SOCKET BASE" formed by a base part, the rear of which connects using the corresponding crimping, protection and positioning methods on the plug pins or male element plus earth methods, characterised by the fact that the base element (21) forms a single solid body (11) with the means of housing the plug pins and the earth protection methods.

2. - "IMPROVED NON-FLUSH FITTING SOCKET BASE" according to claim 1, characterised by the fact that the means of retaining the plug pins and the earth protection methods on the socket base (10) are formed by an extension (12) without an upper base that emerges from upper section (22) of the base element (21).

3. - "IMPROVED NON-FLUSH FITTING SOCKET BASE" according to the claim 1, characterised by the fact that the extension (12) has an open cylindrical configuration on its upper section with its inner surface (14) having means of retaining the plug pins and the earth protection methods.

4. - "IMPROVED NON-FLUSH FITTING SOCKET BASE" according to the claims 1 and 3, characterised by the fact that the base element (21) has a slightly prismatic shape with its upper section (22) being slightly curved.

5. - "IMPROVED NON-FLUSH FITTING SOCKET BASE" according to the claim 1, characterised by the fact that the solid body (11) is manufactured by injecting a plastic material into a mould.

6. - "IMPROVED NON-FLUSH FITTING SOCKET BASE" according to the claim 1, characterised by the fact that the solid body (11) will be manufactured from polycarbonate. Different colours and/or transparencies may be selected for the different parts of the base for decorative or aesthetic purposes. 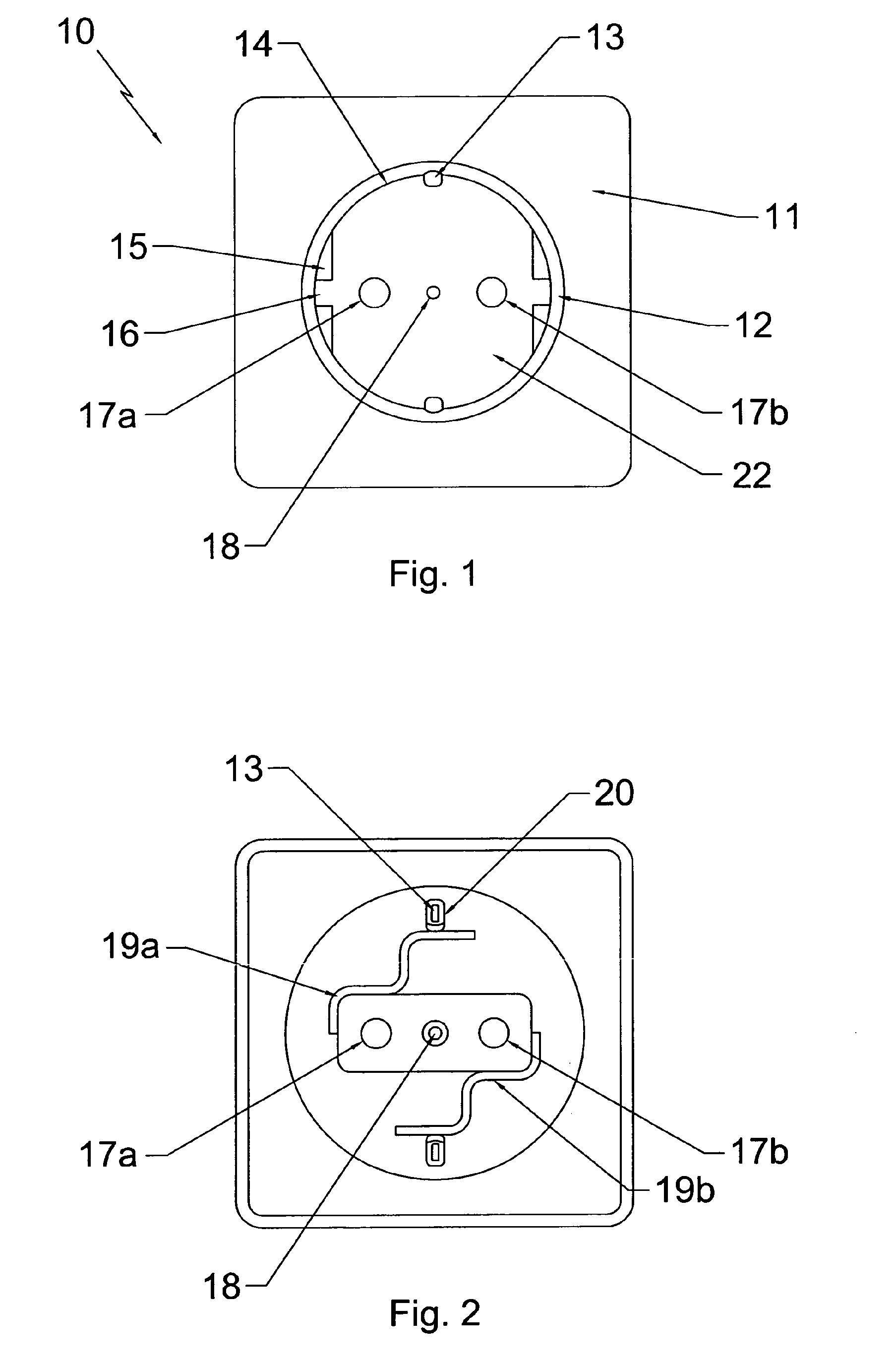 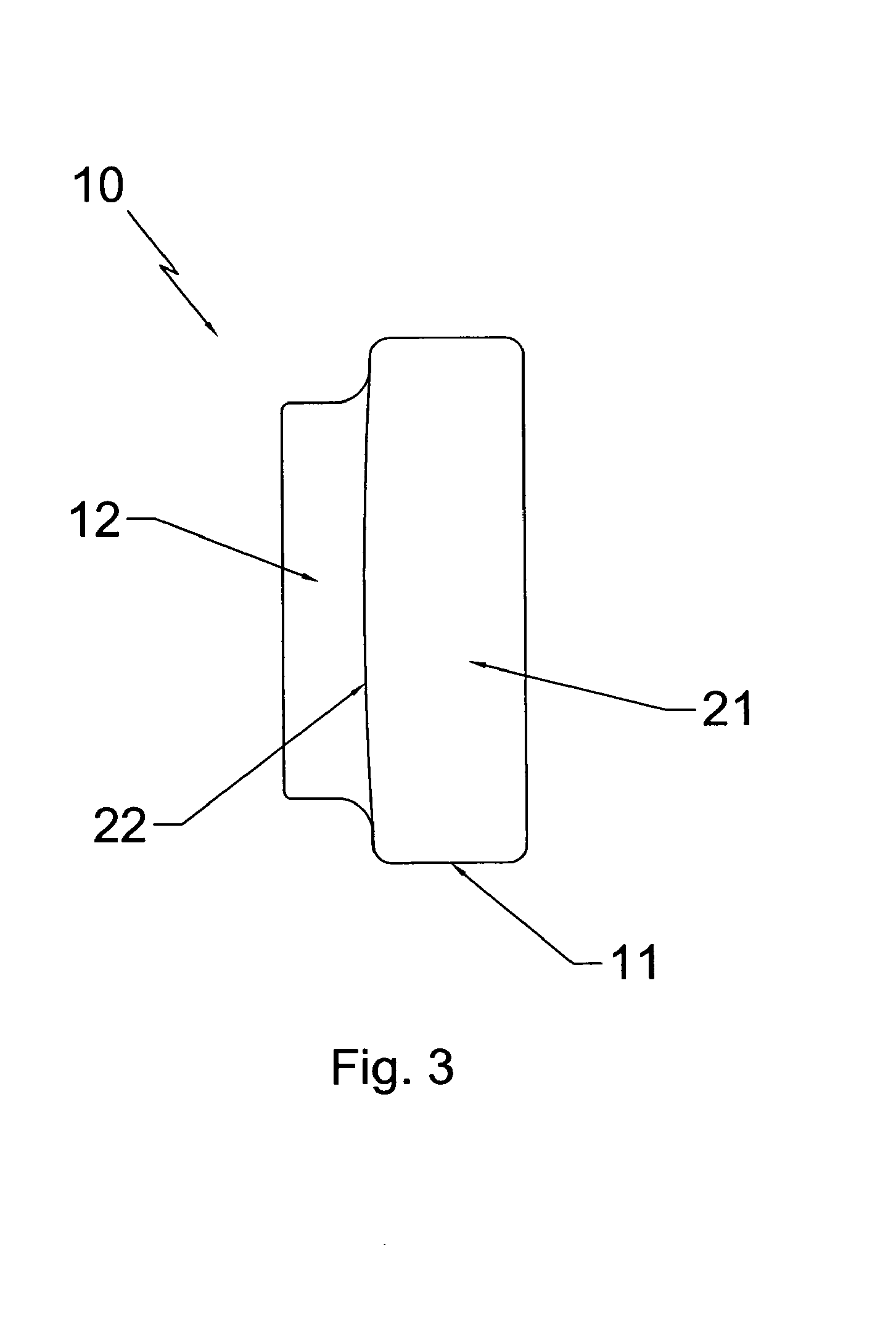 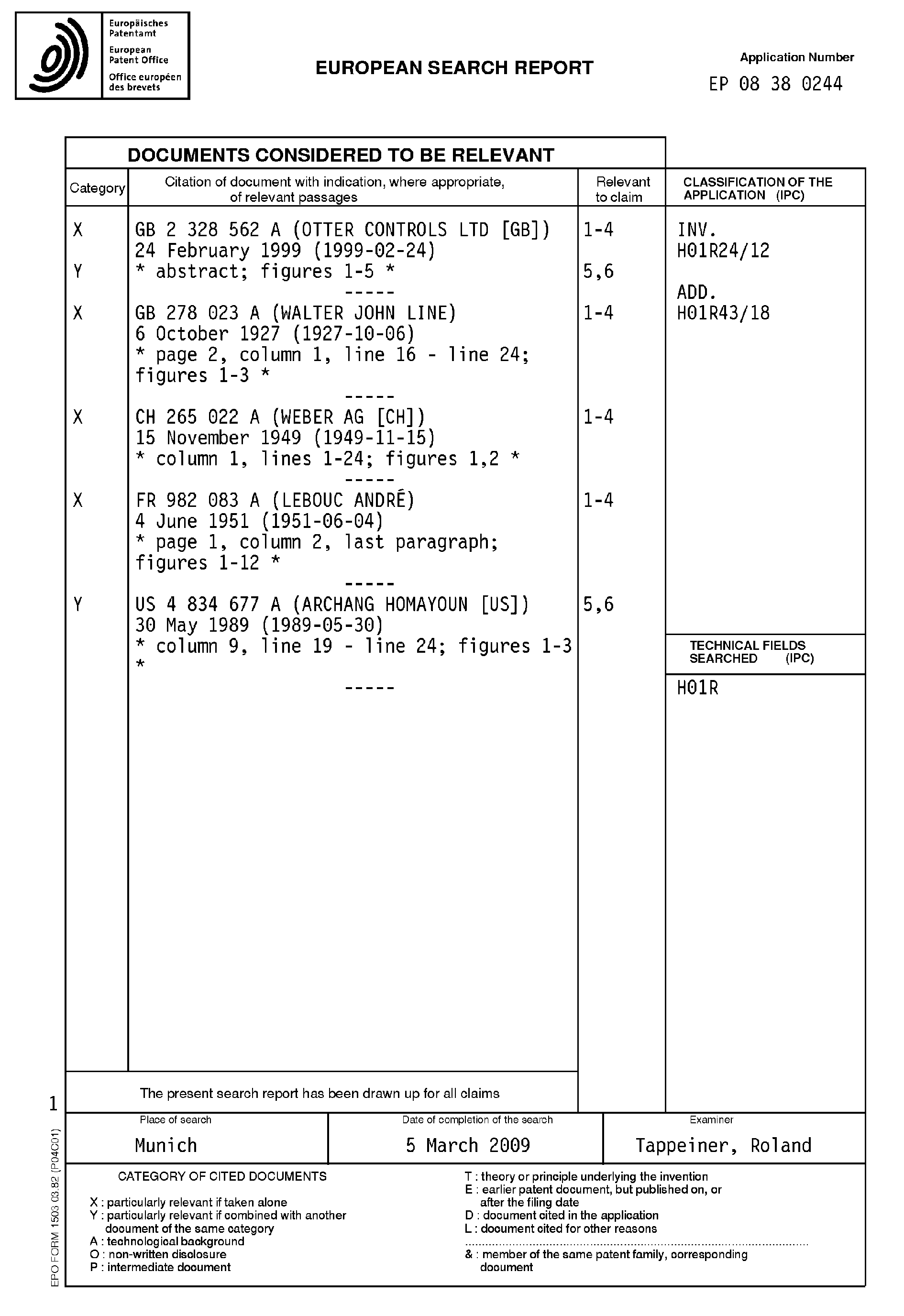 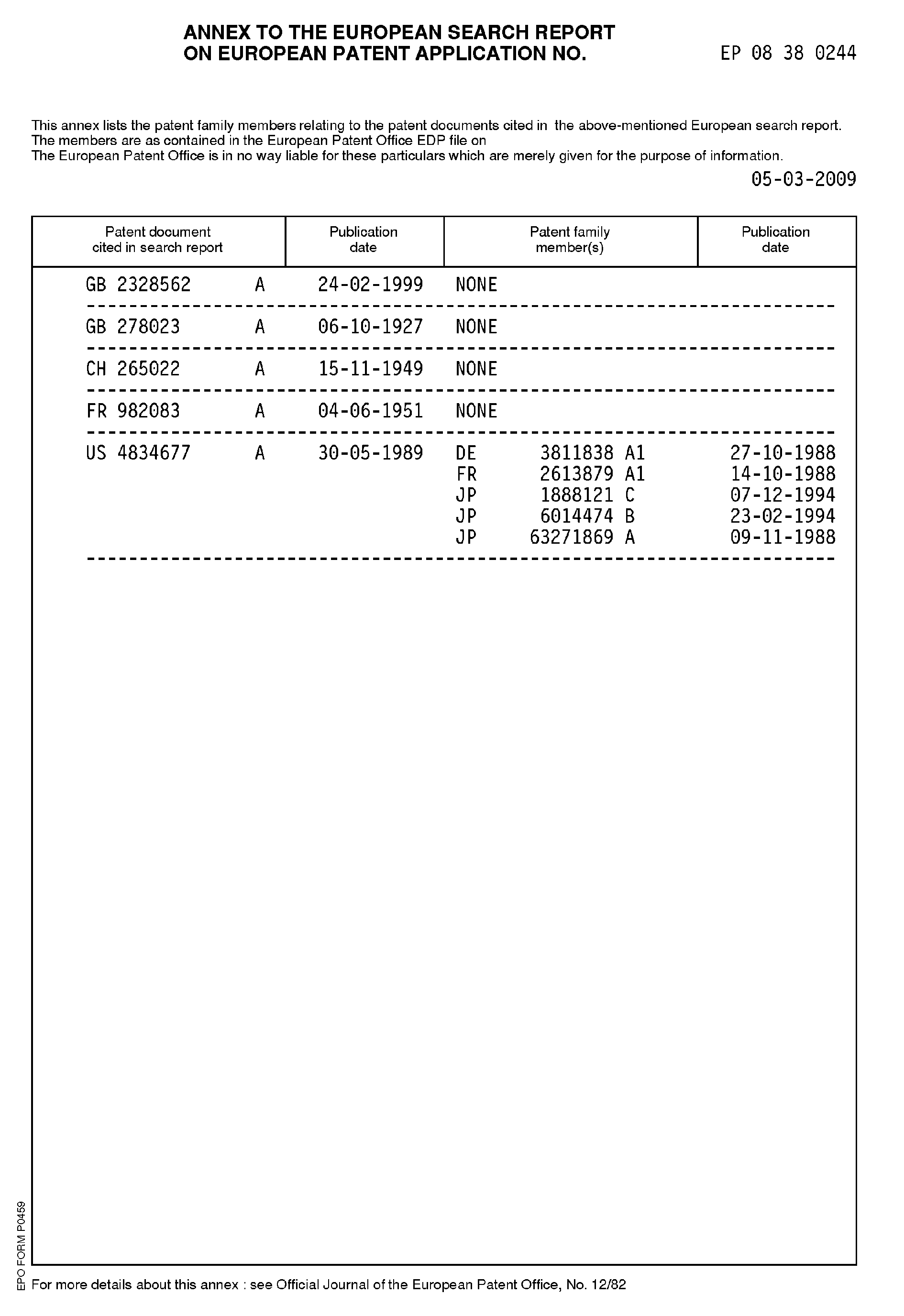