Fig. 1 is a frontal view of a tightly integrated serial printer apparatus employing a series of 'pass-through' inverter modules.

Fig. 2 is an enlarged, partial side view of one of the 'pass-through' inverter modules employed in the printer of Fig. 1.

[0015] With reference to the drawings, the showing is for purposes of illustrating alternative embodiments and not for limiting same. For example, while a tightly integrated parallel printing system is described hereinafter that includes two color engines, equally useful in employing a 'pass-through' inverter would be a tightly integrated parallel printing system with two monochrome engines or one color and one monochrome engine. Fig. 1 shows a schematic view of a printing system 10 comprising a sheet feed module 11, first and second electronic printers 12 and 14 that include color image marking engines (IMEs) 13 and 15, respectively, that include cyan, yellow, magenta and black developer housings and improved inverter modules 20 and 30 connecting these three elements and associated for tightly integrated parallel printing of documents with the system. Finished output from the printing system is sent to finisher F (not shown). For simplex copies from both print engines, feeder module 11 includes a plurality of conventional sheet feeders that feed sheets downward into a vertical transport path 16 that conveys the sheets to transfer station 17 to have images from IME 13 transferred thereto. The sheets are then transported through fuser 18 and into a simplex path by-pass path A in Fig. 2 of inverter module 20 and through decurler 40 and color sensor 42. Afterwards, the sheets are transported through the vertical transport path 44 to highway media transport path 19 and into duplex exit and pass-through entry path E of inverter module 30 (which is identical in parts and functionality to inverter module 20 shown in detail in Fig. 2) with the leading edge traveling through horizontal portion 27 past gate 26 and, if needed, up into inverter leg 28 until the trailing edge of the sheet clears gate 24. The sheet is then reversed and diverted by gate 24 up inverter transport H and is diverted by gate B into simplex exit path G through decurler 54 and color sensor 56 and is delivered image face down into finisher module F. Unprinted sheets destined for the second print engine are fed from sheet feed module 11 downward through vertical transport 16 and across highway media transport path 19 entering the pass-through inverter module 20 at the pass through entry E and exiting at the pass through exit J and proceeding in the direction of arrow 46 along registration transport N to transfer station 50 to receive images from IME 15. The sheets are then transported through fuser 52, decurler 54 and color sensor 56 en route to finisher F. The details of practicing parallel simplex printing and internal or single pass (serial) duplex printing through tandemly arranged marking engines is known and can be appreciated with reference to the foregoing cited U.S. Pat. No. 5,568,246. Control station 60 allows an operator to selectively control the details of a desired job. Optionally, an insert or interposed sheet, such as, a cover, photo, tab sheet or other special sheet can be inserted into the first printer engine from an auxiliary sheet feed source (not shown) through sheet input 70, if desired. In Fig. 2 an enlarged side view of the improved inverter module 20 is positioned between the first electronic printer 12 and the second electronic printer 14 that is identical to inverter module 30 and in accordance with the present disclosure facilitates pass-through of unprinted sheets from the first electronic printer to the second electronic printer. The inverter module includes an inverter 21 with a multi-positionable simplex invert gate 22 that in a first position directs simplexed non-invert sheets (imaged on one side only) received from fuser 18 through the by-pass section A to decurler 40 and subsequently into second electronic printer 14. When gate 22 is in a second position for internal duplex purposes, sheets are directed into the entry path D down a first leg 23 of a U-shaped media path member 25 and past a duplex gate 24 that, in a retracted or first position, direct sheets through a horizontal portion 27 of U-shaped member 25 and past a pass-through gate 26 that in a first position direct the sheets up a second leg 28 of the U-shaped member until the trailing edge clears gate 24. Duplex gate 24 has now been actuated into a second position for exit to the printer's duplex path. Individual sheets are reversed and exit the duplex exit portion E of the inverter and back through highway media path 19 and registration transport L to IME 13 for imaging on the opposite side.
[0016] For serial or single pass duplexing, sheets simplexed at IME 13 enter the simplex entry path A of inverter 20 and are inverted as described hereinbefore and exit the simplex exit path G and are forwarded to IME 15 for images to be placed on their opposite sides. Afterwards, if necessary, the sheets are sent to inverter 30 to be inverted for proper orientation in finisher F.
[0017] Thus, an inverter module that includes a by-pass, simplex invert and duplex invert paths and a straight pass-through path has been disclosed that is inserted between printers in order to replace the long high speed transports that traditionally connect an upstream printer with the media path in a downstream printer. The inverter module makes use of existing printer transports to thereby significantly reduce the number of media path components needed to enable tightly integrated parallel and serial printing architectures.
[0018] Another alternative embodiment comprises a third print engine located to the right of the second print engine. In this embodiment, a third inverter module is placed to the right of the third print engine in order to properly orient sheets entering finisher F when necessary and to act as inverter for the third print engine and duplex highway path. In this embodiment, all three print engines can supply document sheets cooperatively to finisher F. Additionally, the second print engine can supply documents to the third print engine for single pass duplex printing. 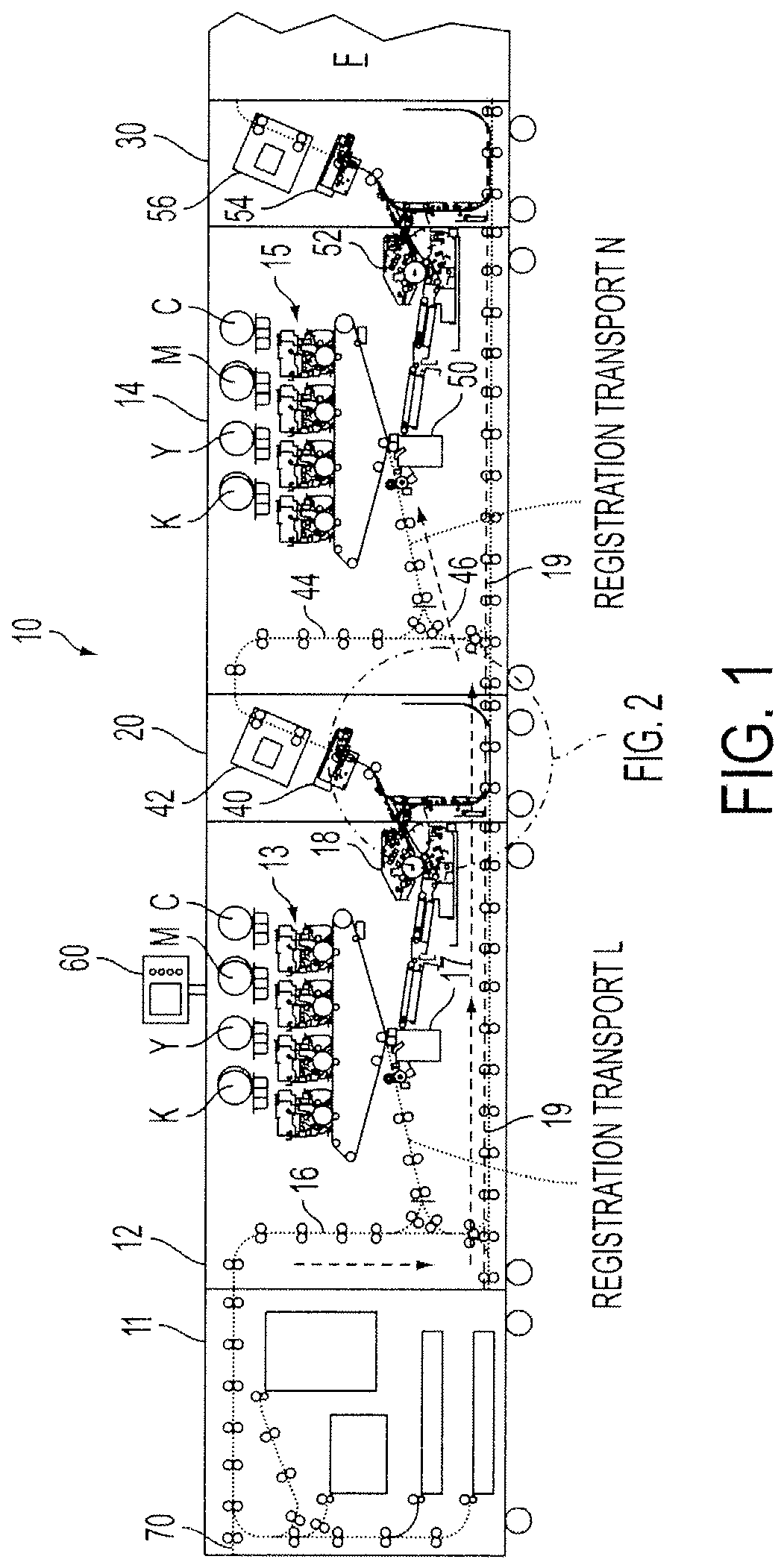 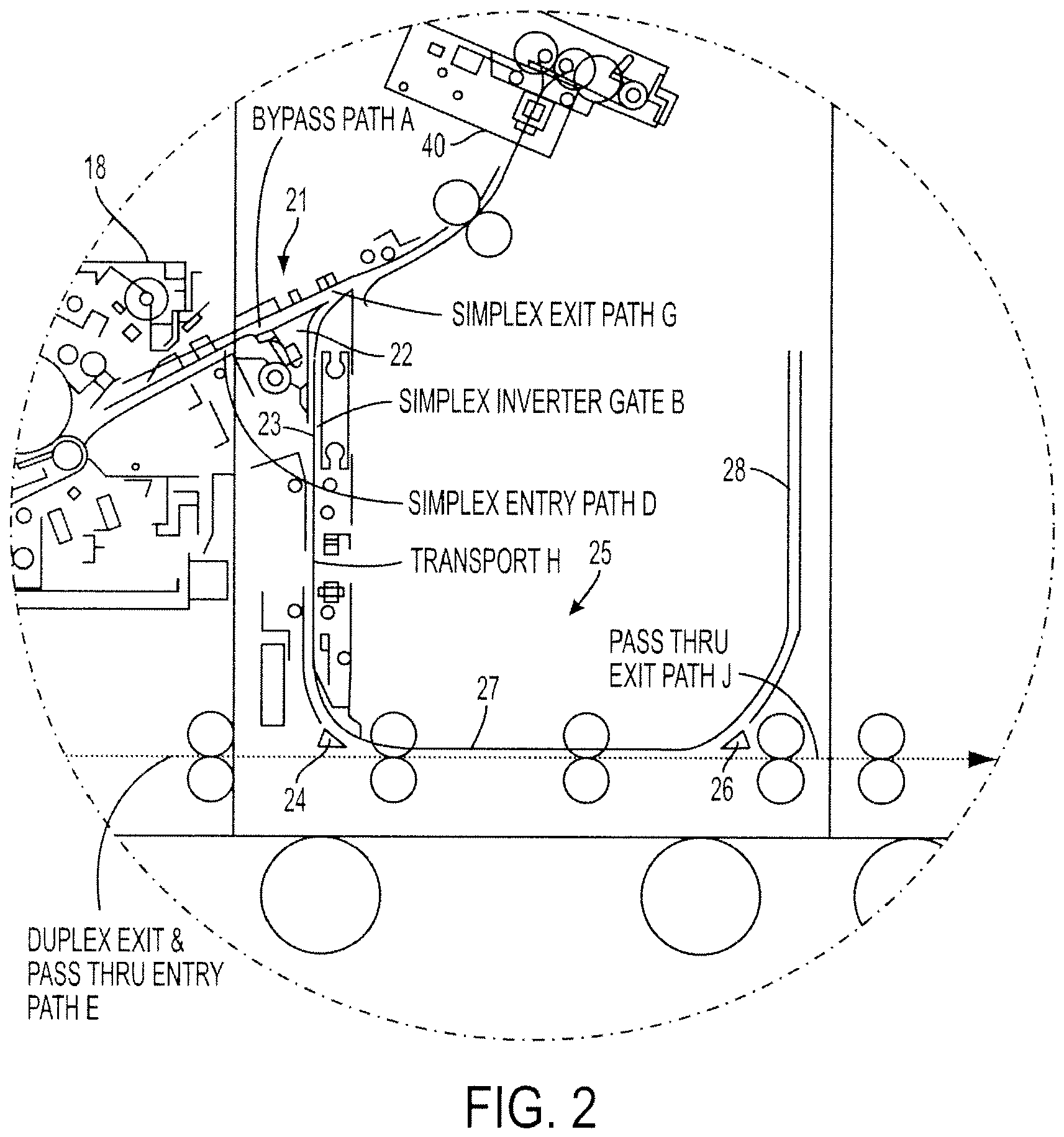